How Baseball Cards Were Made in the 19th Century

I have loved the game of baseball (and cards!) since I was little.  Nothing has captivated me quite like it.  Well … maybe when I first learned of dinosaurs.  I guess that’s why 19th century baseball – and its artifacts intrigue me so much.  Each time I learn something from that time period, I savor it.  Doing an “online archaeological dig” brings up many things about the sport I love so much that I never knew about.  The online community is captivated by the likes of Trout, Acuna and Soto, but many cannot name a single player from before 1900 … in fact, many would be shocked to hear that baseball was even around back then!  (Fun fact:  baseball was *thriving* during the Civil War!)

The flavor of 19th century baseball seems to get lost to time because we simply don’t have much to go by.  We don’t have video or even radio recordings of games.  We can never hear King Kelly’s thick Irish accent, but we can probably find pictures of Andrew McCutchen eating a sandwich yesterday.  We can’t observe a recording of what the first home run in baseball history was like, but we know it was hit by Ross Barnes.  In a previous article I wrote, “Before there were Baseball Cards“, I talked about what woodcuts are and how they were created.  Extremely interesting stuff!  Here is a woodcut from 1874 that depicts Ross Barnes.  There aren’t really any baseball cards of him, so it is great to be able to see him make an appearance here!  This woodcut also depicts some true pioneers of baseball:  Harry Wright, George Wright and A.G. Spalding. 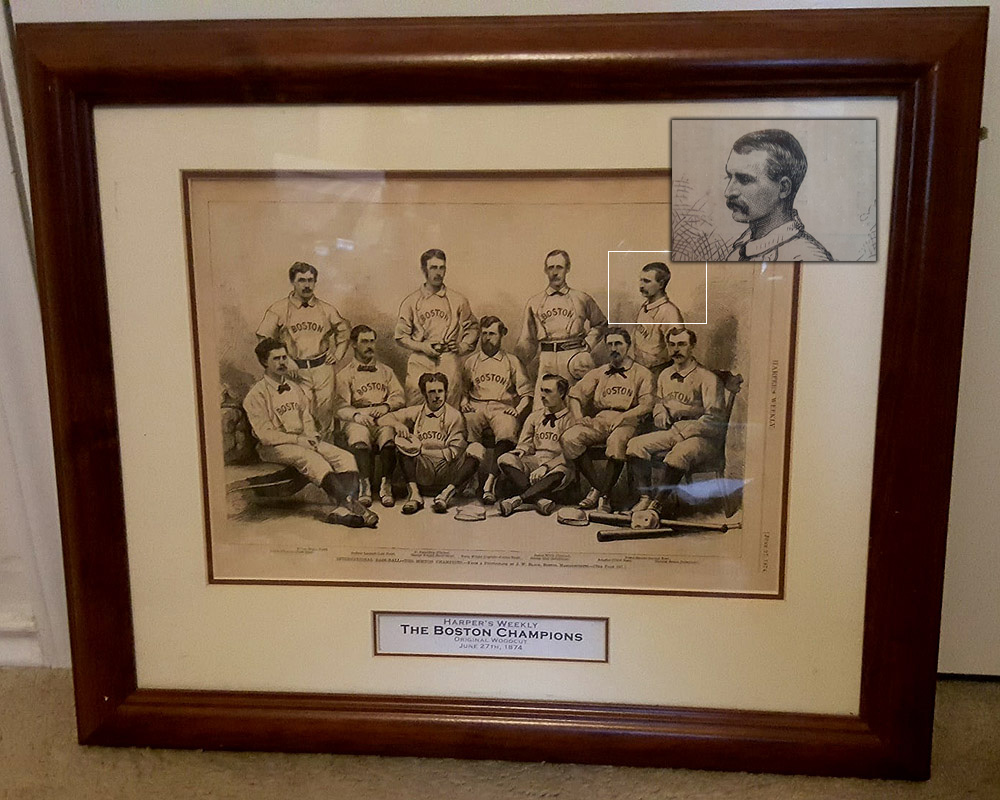 Pictures are few and far between of baseball players from this time period.

I guess all of that is what intrigues me so much.  It is the birth of our beloved sport, and I am fascinated by how we got to where we are today.  My passion is matched with a feeling of duty to share what I’ve learned.  I feel like I have some sort of inside information that could really knock the socks off of baseball fans and baseball card collectors alike.

WHEN A PICTURE REALLY WAS WORTH A THOUSAND WORDS

The 1870s was the beginning of the explosion of beautiful chromolithography (color lithographs) in America.  Up until that point, you didn’t see much that was man-made that blended colors together.  Children and adults alike would collect “trade cards” (advertisements from baking soda to medicine to … you name it!) which would typically be full color advertisements, and oftentimes die cut.  This technology gave birth to the first color baseball cards in the 1880’s.  Allen & Ginter and Goodwin were among the most popular. 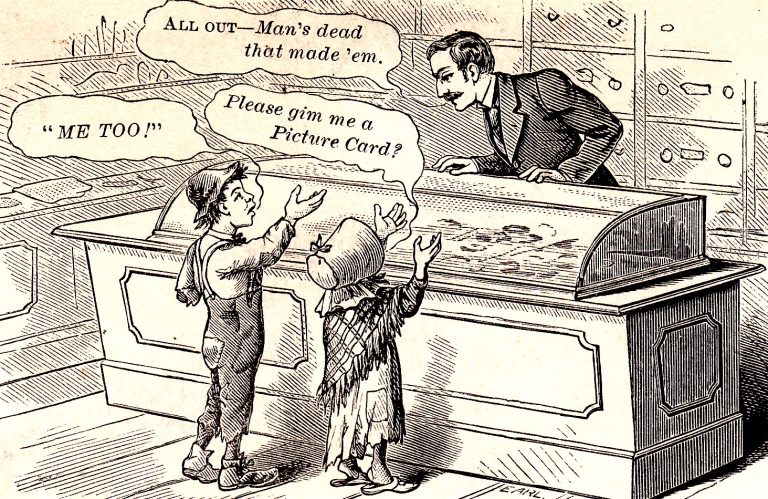 1880’s America was a perfect breeding ground for the birth of baseball cards.  Between the color printing explosion, trade card collecting, and America going wild over baseball, baseball cards were the perfect collectible to produce and include in packages of cigarettes.  Everyone was dying to get their hands on a picture card of their favorite baseball player, because many had never seen the likeness of their heroes before.

Think about that for a second.  Baseball cards were the connection for many to be able to put faces with names.  These cards were *loved*.  They were cherished without any regard for making sure corners weren’t damaged/bent, and many times, would be glued to album pages for safe keeping.  For people who care very little about back damage (such as myself) this gluing act was the saving grace for today’s collectors who mainly care about the condition of the fronts.

I think this is something we take for granted.  Today, we can get on our phones, and watch full baseball games in HD.  We can keep in touch with the players by following them on Twitter and have a glut of high resolution images of any given player at our fingertips.  We can even go back to see many old timers in action like Babe Ruth and Mickey Mantle.  Baseball and baseball card collecting have become fully immersive.  When it comes to 19th century baseball, everything was different.  Not a single person on the planet living today can say they have experienced a 19th century baseball game.  Without video or audio, baseball cards from this time period play a key role in keeping the history of our game and hobby alive in a way that written words cannot.

HOW BASEBALL CARDS WERE MADE

In my opinion, there has never been a better time to collect baseball cards.  We have the latest & greatest technology being used and a TON of options!  Take a look at what Topps has been doing over the past several years with its Allen & Ginter line.  Mini framed red ink autographs, stained glass cards, rip cards (cards that you rip with mini cards in them), metal cards and even framed silk cards.  Does it get any better than this? 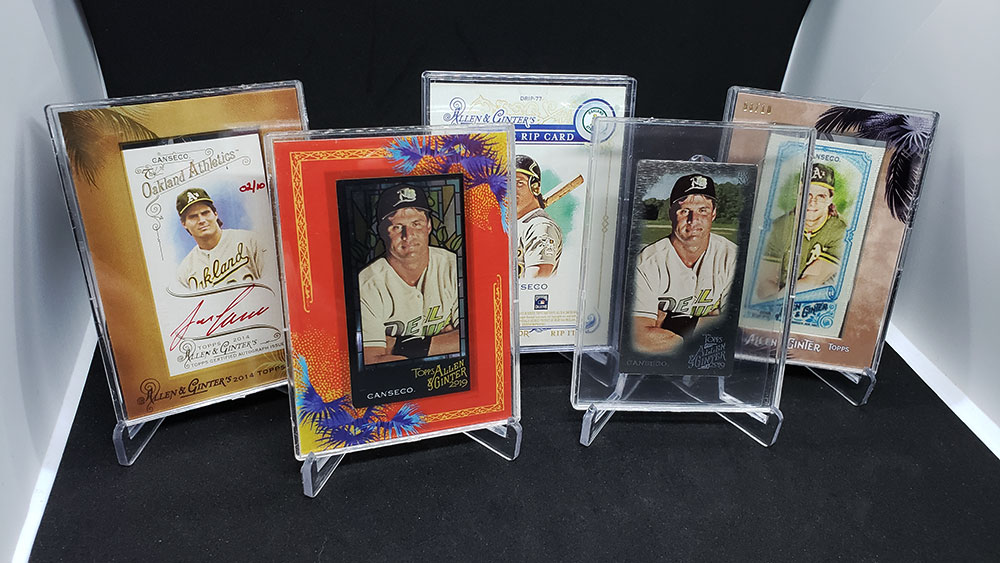 It does – glow in the dark cards!  How can you not love this stuff?

Over the years, I’ve tried my hand at a few Allen & Ginter customs of my favorite player.  You may have seen these before, but I figured I’d show them again …

Here is a card I made entirely out of a player-worn jersey: 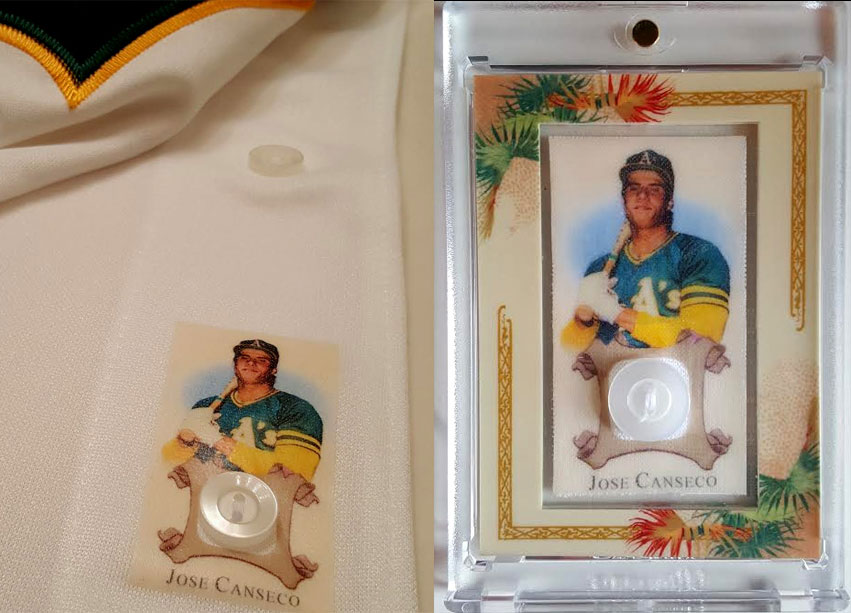 This card was made entirely out of a game used bat (and signed!) … 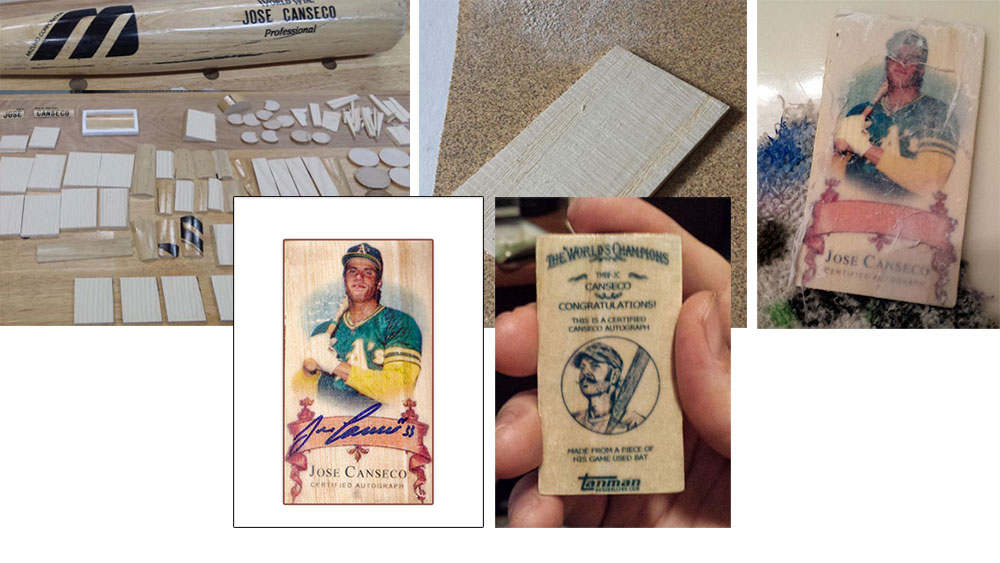 I even made Jose CanLego … 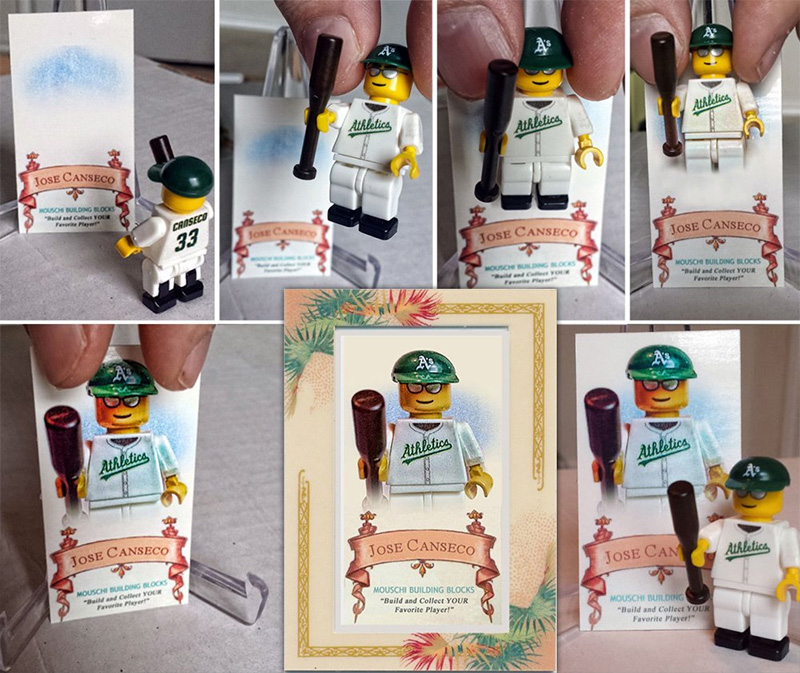 Speaking of Allen & Ginter, what many don’t know is that the original company far predates Topps.  Distributed in 1888, Allen & Ginter was one of the first nationally available baseball cards ever.  I suspect their beauty is the reason Topps revived the brand and design in 2006 – well over 100 years since the originals came out.  The design is so simplistically stunning, that the brand has thrived every year since 2006, with minimal design changes, and remains one of the most popular releases from year to year.  People may be confused why some of the cards will depict designs with palm fronds, or players posing outside in nature.  That is a direct call back to the cards of the 19th century, which of course, was heavily influenced by Victorian era art.

While many of the newer quirky cards shown above are fun, the base cards nowadays and back then look similar.  However, there is a stark difference between how the cards are made now, and how they were made back in the 19th century . The process is called chromolithography.  Shown in the picture below, is a print shop from 1874.  In short, an artist would create an image, then a lithographer would replicate the image on a slab of limestone. (Each shade/color would need its own limestone.)  After the artwork is applied to the limestones, they would be treated so the areas not showing any art would repel ink.  Only the art itself would retain ink.  After ink is applied to the limestone, it would be impressed upon paper.  Each color/shade would need to be impressed on the paper until a full color image appears.  The picture below shows various people working the various steps I just described.  The original of this does not show baseball subjects, but I modified it for the purposes of this article. 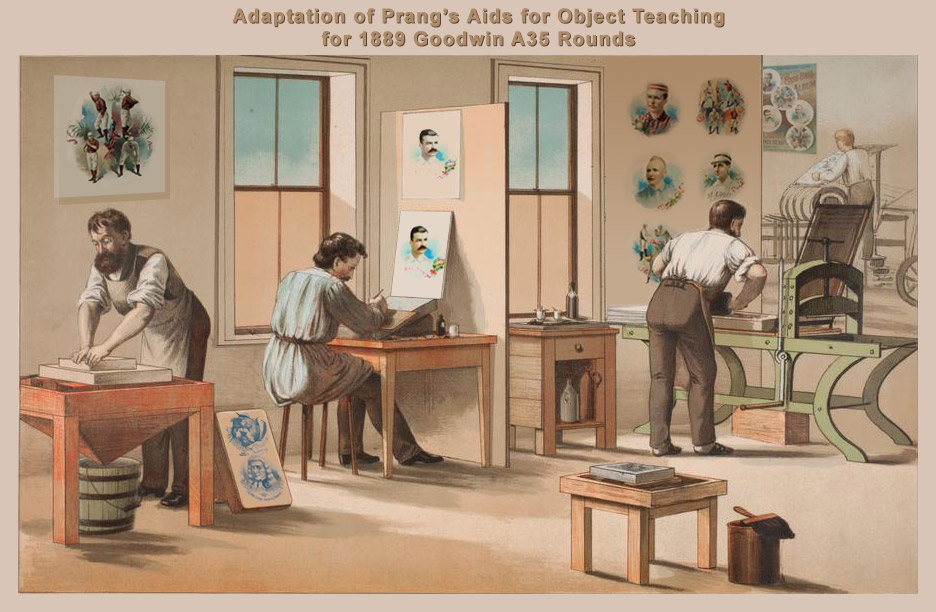 Shown below is a neat six card set created over 30 years after the picture above was produced, so while the techniques may be a bit more detailed and advanced than what was used to create the original Allen & Ginter and Goodwin baseball cards from the 19th century, it does illustrate some important steps.  This set is ingenious because it shows the actual lithographic steps “in progress” in the portrait. Each card shows what the chromolithographic portrait looks like pass after pass. 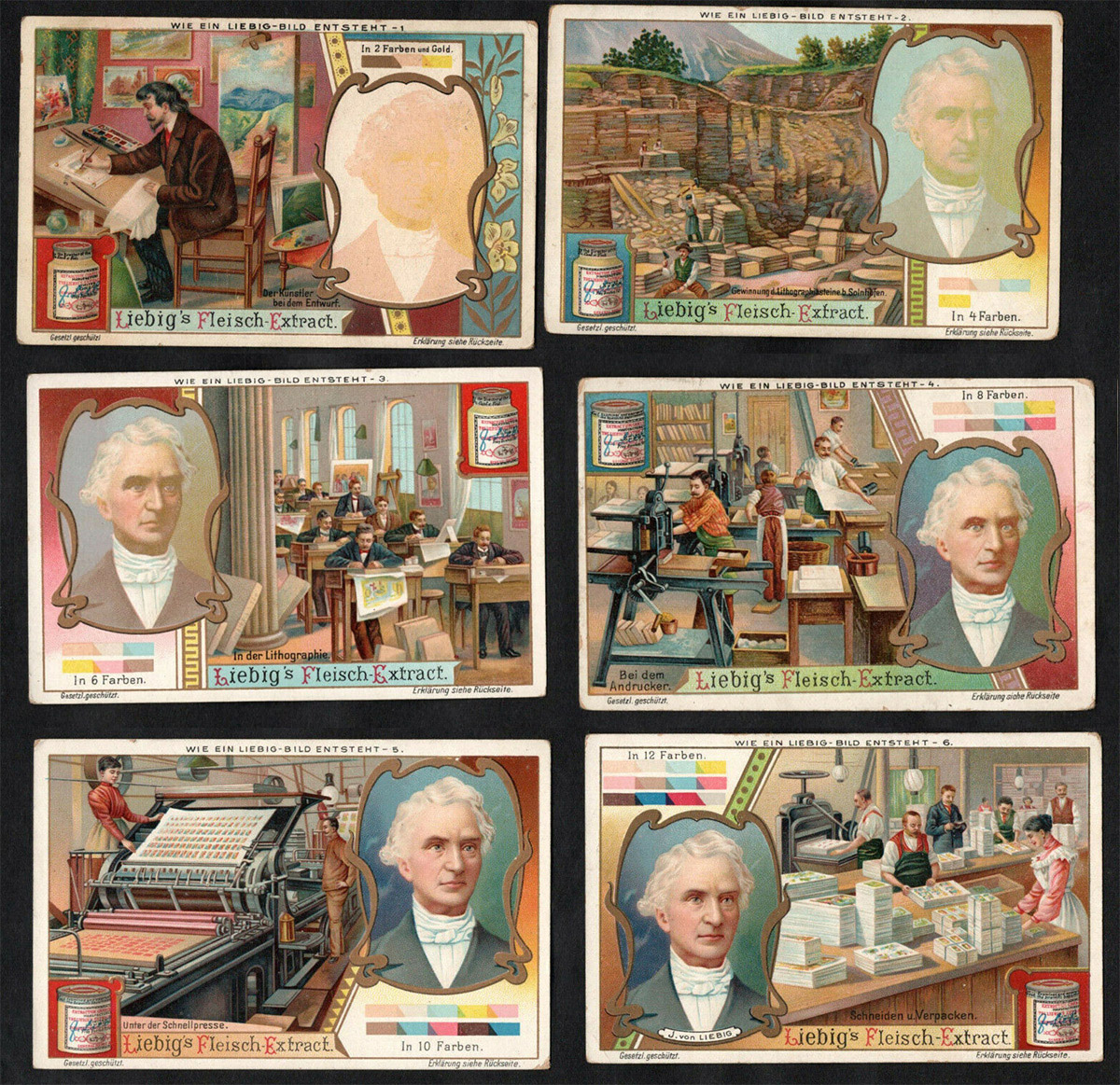 As you can see from the picture and card set above, there was a lot of human interaction and effort involved in creating these little works of art we call 19th century baseball cards.

I’ve shown it before, but here is my set.  The colors are beautiful, and the fronts look pack fresh, but the backs have some damage to them, due to having been glued in an album for over a century. 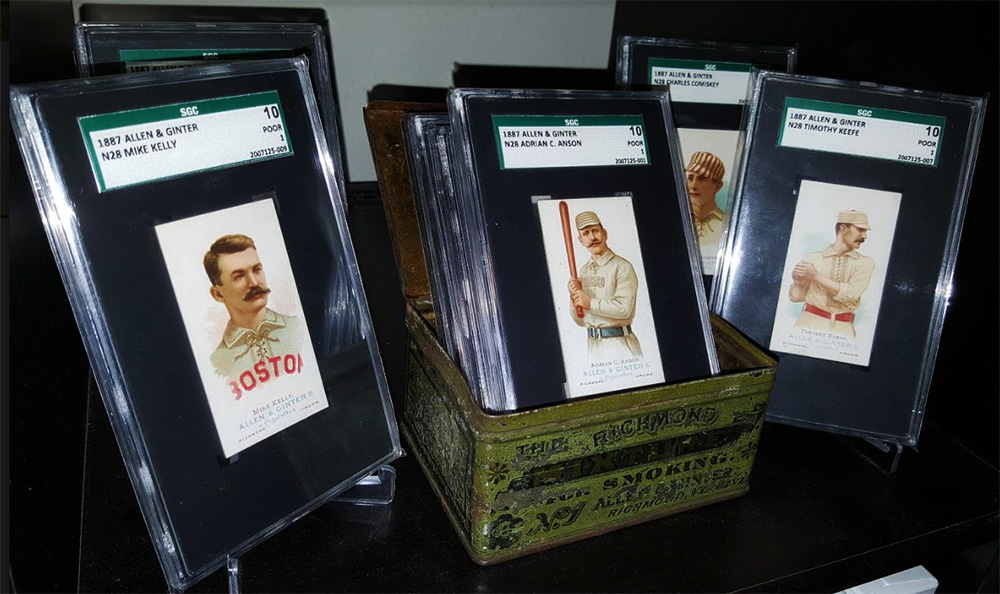 Recently, I’ve been fortunate enough to pick up “the rest of the story” and acquire an Allen & Ginter album that was also created using chromolithography.  Each page is bound together by a thin rope.  It is fun to see how much care was taken to create this, and also, what my Allen & Ginter set could have been glued to.  Shown below is the cover and a few pages inside:

Yes, even Joseph Ducreaux a.k.a. The Old Planter a.k.a. the creepy Allen & Ginter guy makes a few appearances in the album, too.  Look familiar? 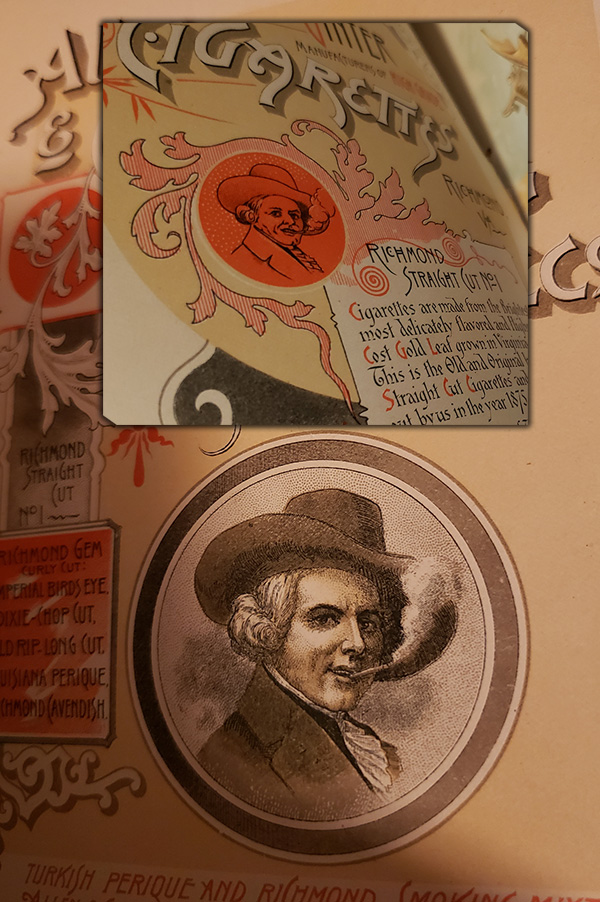 Having both the set and the album is nice to have a more complete picture of what was available to our hobby’s first cardboard crack addicts over 130 years ago.  The album colors and artwork are simply stunning.

Speaking of stunning lithography, Goodwin came out with its own full color set too, which I have as well. 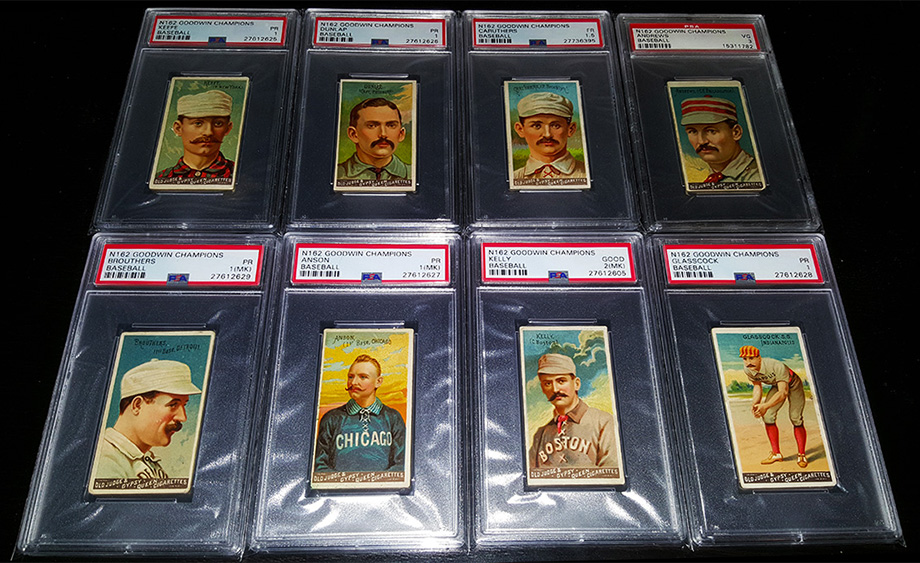 I appreciate all of these so much more after knowing what great lengths they took to create them.  There is no holographic foil, no signatures, game used pieces or serial numbers, but I would highly recommend one of your next purchases being a 19th century baseball card.  There is just something special about holding something that is both history and art.  Something that took a tremendous amount of effort to produce by hand, and was done so in a time before television, radio and the internet were used to document the players.  Anyone with a printer and the internet can find a high resolution scan of these and simply print them out, but the originals have an incredible story of art and history to tell – a story that marks them as instrumental tools for keeping 19th century baseball alive and giving us a taste for what our hobby was like back then, at the beginning. 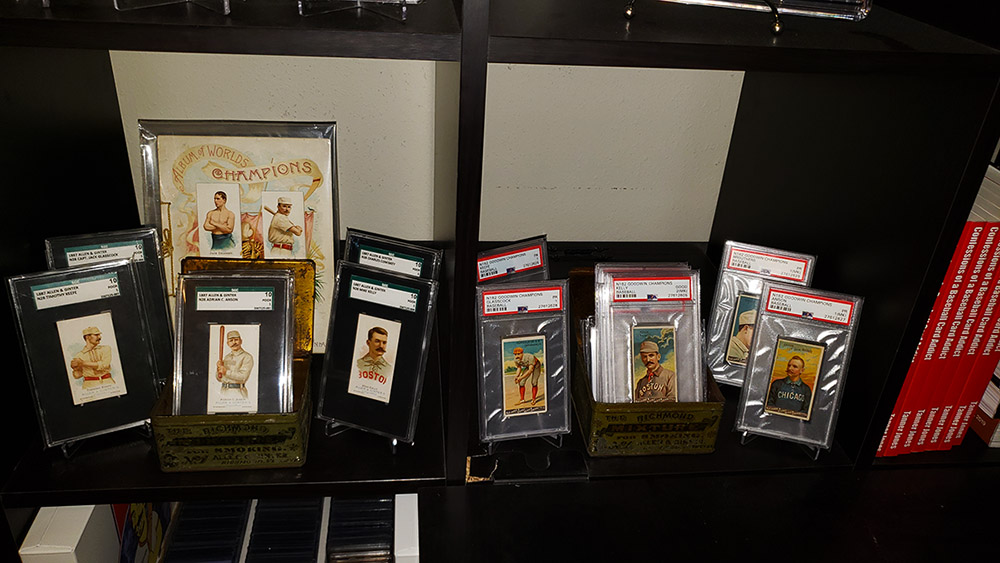 Stay tuned – in the next week or so, I’ll be writing about what is considered to be the most premium baseball issue ever to have been offered from the 19th century – and some custom work to go along with them!