Every single day, I get a lot of questions, and many of them are the same.  I figured it would be a good idea to address these commonly asked questions on my website!  If the below hasn’t answered your question, feel free to ask!

Yes I am!  I would no longer consider myself a “Supercollector”, as I don’t buy cards just because I don’t yet have them.  When I was supercollecting, I would be getting in cards nearly every day.  Now, I might not have anything come in for weeks.  I am now focusing specifically on ONLY cards I *love*.  That means my small collection is heavy on this sort of thing… (click the video!)

And not so much on this sort of thing … 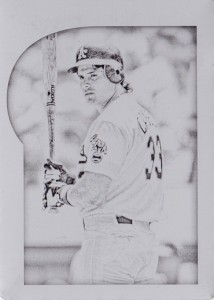 No more meaningless maildays for me!

What exactly are you collecting now?

Generally speaking, any Canseco cards that catch my eye.  More specifically, rare and pretty cards from the mid ’90s to mid ’00s, though there are some exceptions.  I also love premium & jumbo relic cards, along with other high end cards from time to time.  There might be exceptions to each, but I don’t particularly partake in oversized, mis-cut, error cards, nor do I do printing plates, try to complete rainbows, collect plain 1/1s or indulge in buybacks.  If it was made in the past 5 years, I tend to stay away, unless it really catches my eye (i.e. it is something really special or looks awesome).  Here are a few cards that I love: 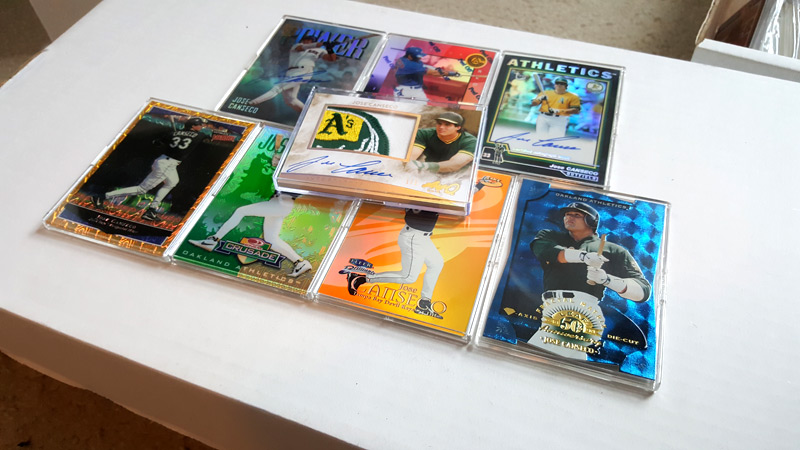 Here is a 1/1 I don’t have any desire for (with as much as I love mustard yellow borders, lol…) 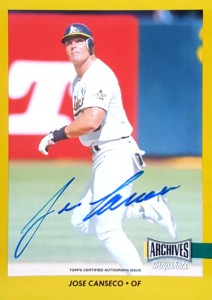 This is my jam… 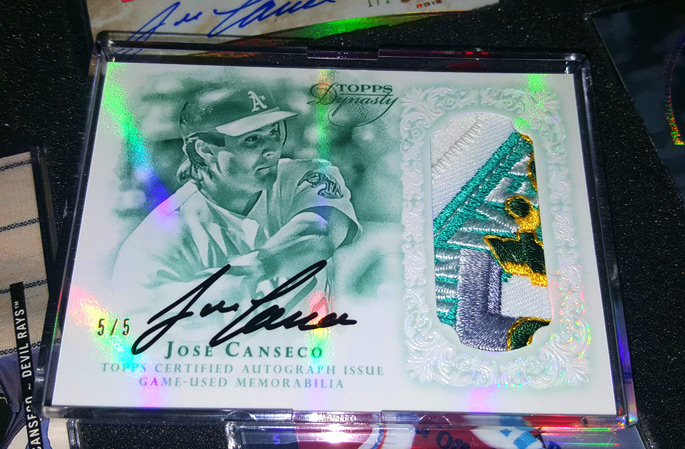 …and this is not  (bland and boring)… 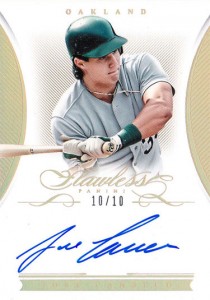 Do you prefer your toilet paper over or under?

Ehh, I’m not exactly sure what this has to do with baseball cards, but while aesthetically speaking, under is more pleasing to the eye, over is best from a functionality perspective.  The invention schematics even call for it being over.

I thought you stopped collecting.  Didn’t God tell you to stop?

Nope!  I never said God told me to stop 🙂

Then why did you stop Supercollecting Canseco?

In mid 2018, I was making plans to acquire a huge collection when I felt that God didn’t want me making the purchase.  There was no thundering voice from the clouds.  It was just a feeling based upon how the Bible tells us to live our lives, and how I know it would have consumed me even more so than supercollecting already did.  Shortly thereafter, I thought to myself “If I’m not getting this collection, what am I still doing collecting?  I’ve already accomplished pretty much everything I have wanted.”  In that moment, I decided to retire from supercollecting Canseco and sell my collection.  It was never about lost passion; I simply reached the “top of the mountain” so to speak, for what I wanted to do.

The next day, I felt uneasy about my decision to sell, and prayed to God asking Him for confirmation that this was the right thing to do.  A couple hours later, we were sitting in church, and our pastor mentioned something along the lines of perhaps God calling some of the congregation to sell their collections if they were too wrapped up into it.  The timing was wildly bizarre and was great to hear for confirmation!  Some people have suggested that perhaps Holly pulled our pastor aside and asked him to say something.  Rest assured that is 100% not what happened.  If you would like to read more about my decision to retire, you can click here!

Do you regret your decision?

Absolutely not!  Looking back, I have a much clearer head about it all.  I was simply too wrapped up into collecting cards.  It took way too much time, money, brainpower, etc.  As a follower of Jesus, my mission on earth is not to collect cards, but rather be passionate about following Jesus, and obeying Him.  I want to glorify God in all my words and actions, help others and point them to Him as well.  I fear that my passion for supercollecting simply went overboard.

Today, I enjoy a much more relaxed involvement in the hobby.  I’m not constantly worrying about missing a card I don’t yet have.  I couldn’t be happier!

What do you dislike?

A lot of things.  Namely: beans, when the couch cushions aren’t pushed all the way in, alarm clocks, traffic, Ashton Kutcher, when people call me buddy…the list goes on.

No, buddy.  I meant what do you dislike in the hobby?

You know it doesn’t bother me when people call me buddy after I publicly state I don’t like being called buddy, right?  Anywho, the list isn’t terribly long, but namely when people don’t follow through on deals, when they lie about me behind my back, collectors who are disrespectful or deceitful, scammers, trolls, shock-jock wannabes, rude dealers, pot-stirrers and Ashton Kutcher.

How is the selling of your Canseco collection going?  Did you lose money?

I’m happy to report that I was able to sell everything inside of four months, and actually turn a profit!  I detail how I did that in my book Confessions of a Baseball Card Addict.  I am now building a small collection of meaningful cards using the profits of the sales of my collection.  I now appreciate the cards I have more now than ever before.  Check out this beauty, for example.  It used to be mine, and I was able to trade back for it!  It made its way north of the border for a short vacation in Canada, and came back to me 🙂  I love that its trip is now all a part of the journey!  Because of this, the card means so much more to me now than it ever did before.  (Click the video!)

So happy to have this beauty back in my collection! It took a vacation to Canada for a while 😍😍😍#collect #BaseballCards #TheHobby pic.twitter.com/z0VsvmZTET

Wouldn’t it have been better to have just kept the cards you wanted in the first place?

This completely goes against conventional wisdom, but not only am I okay with not having kept all the cards I wanted (though I did keep some!), I am extremely glad how everything turned out.  Collecting isn’t just about the destination; it is about the journey.  The act of collecting can oftentimes be more fun than actually acquiring the card you are targeting!  I’m grateful I decided to come back to collecting after I sold virtually everything.  If I decided to keep everything I wanted before selling, I wouldn’t have had nearly as much fun as I’m having now.  I will give you an example: 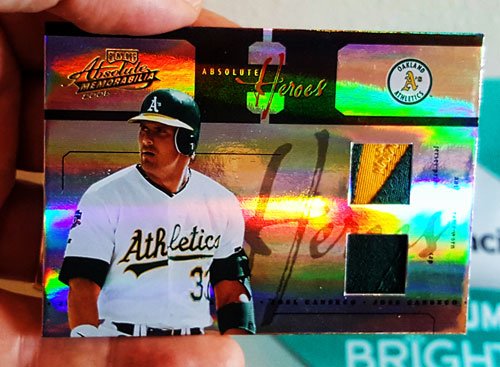 This is such an incredibly pretty card, right?  When I first picked it up, it didn’t mean much to me.  It was purchased with various other rare Canseco cards.  Yeah, I thought it was cool, but it wasn’t until I sold it that I realized how special of a card it was.  I remember looking at it on eBay thinking “Hmmm.  That’s a much nicer card than I remember.  Maybe I should pick that back up!”  Just like that, it was sold.  (Insert much weeping and gnashing of teeth here.)  I asked the seller to put me in touch with the buyer, and made a very generous offer.  We couldn’t make a deal.

Apparently, the card exchanged hands a THIRD time, as it was up for sale via auction from another seller!  I put my best bid in, and much to my surprise, I ended up winning it for about half of my offer to the previous owner!  It is what I like to call a boomerang card, because it went all over the country before finally coming back to me.  To think that I purchased this card from a former Supercollector, which stayed in my box unnoticed for years, was sold to three different sellers and was able to make its way back to my collection, adds to the excitement and appreciation I have for this card.  Had I just kept it, none of that excitement would have ever happened.  I have story after story to tell of many cards like this as well!

Should I still tag you / let you know about any rare Canseco cards I see?

I would very much appreciate it, thank you!  🙂

I heard a rumor that you dip french fries in mayonnaise.  Is that true?

How are the book sales coming?

Due to the small community we have, I prepared myself to sell no more than 100 books throughout the life of the book itself.  I’m happy to report that this figure was surpassed inside of two weeks!  While most of my sales are through Amazon, a good percentage of book sales go directly through me, due to requests for autographed copies.  I have sold out of each previous shipment fairly quickly.

Is it your belief that great literature of the twentieth century lack protagonists who qualify as heroes?

Are you now rich after selling your books?

Ha!  No.  While my book sells typically for $14.95, the actual printing and production of them eat up a LOT of that.  It is important to note that I never set out to write a book to make money.  It was written because I have always wanted to write a book, and baseball cards are an extreme passion of mine.  If the main goal of writing a book was to make money, believe me – I would not have chosen to write about baseball cards. 🙂  The most exciting thing to me is all of the glowing reviews I have been given – people actually love it!  While I am happy it is selling well, I am MUCH more satisfied with the feedback I have been receiving.

How can I obtain an autographed copy of your book?

You can send 14.95 + 3.95 shipping via PayPal to tanmanbaseballfan@gmail.com

If you have any other question for me, feel free to email me at tanmanbaseballfan@gmail.com or hit me up on Twitter @tanmanbbfan.

PS, I don’t have anything against Ashton Kutcher – it was just a joke 🙂