For a time period growing up in the late 80s/early 90s, there wasn’t a bigger card than the 1986 Donruss Jose Canseco Rated Rookie.  It was the grail of grails.  I have heard reports of it selling for over $150 back then. It didn’t matter to me, because anything over $20 might as well have been a million dollars.  It was the card that was so hot and so big, that I don’t even think it entered my dreams. 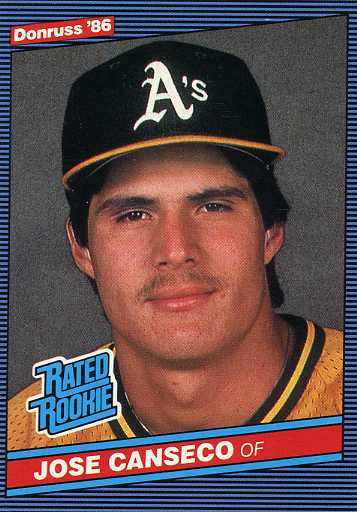 1986 Donruss Jose Canseco Rated Rookie – the face of the hobby

While I was preoccupied with 1988 Donruss and 1989 Score, the high rollers were all about the 1986 Donruss Rated Rookie Jose Canseco.  Like the 84 Donruss Mattingly before it and the 89 Upper Deck Griffey after it, the large headshots seemed to hit collectors just right.

Canseco was larger than life, spilling into pop culture, just like Babe Ruth did decades prior.  He was a household name, and with baseball card collecting being at an all-time high during this time period his Rated Rookie was the face of the movement.  Virtually everyone was collecting back then, or so it seemed.

According to a list compiled on the Net54 Baseball Forum , an estimated 500,000+ of this card were produced!  It is NOT rare, but it is still highly coveted.  In fact, on average, to this day, two Jose Canseco Rated Rookie baseball cards sell each and every day on eBay!  The price varies depending upon eye appeal.

This year, it has gotten more of the attention it deserves with the PSA 10 copies selling routinely at the $300 mark.  With just 647 copies in the PSA POP report at the time of this writing, a PSA 10 can be found at any given time, assuming you are wanting to drop the cash for a perfect specimen.  PSA 9s seem to go in the $40-70 range, with over 2,500 having been graded at a 9.

I hear stories from people all the time about how they remember this card – that their mom bought it for them for Christmas, or their dad found it in a box with them – or even how they stared longingly in a dealer’s display case at it.  My old mechanic heard I collected Canseco and wanted to see what I had.  I was extremely excited to show him all of the rarities that he’d likely never see in person ever again.  As I showed him the 1986 Donruss Highlights White Letter, 1988 Topps Cloth, 1989 Leaf Blue Chip … he simply didn’t care.  All he wanted to see was the Rated Rookie.  Puzzled, I flipped to it in my box, and handed it to him.  He held it up to his face, and he beamed with nostalgia.  “Ahhh…now THAT is what I’m talking about.”  He held is as if he had found the holy grail – the other cards didn’t matter to him at all! 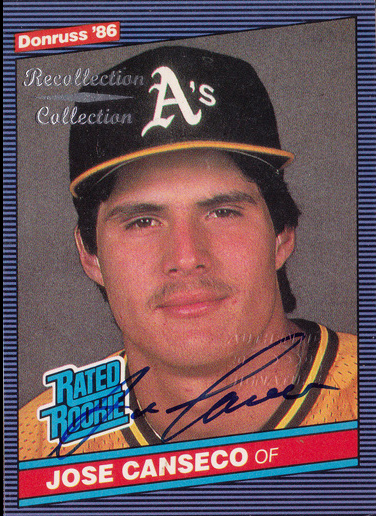 While many people desire to have a nice presenting copy of one of the most famous cards in baseball card history, with others desiring a perfect PSA 10, there are others who want something even more desirable.  A buyback.

What is a buyback?

In the early 2000s, Donruss randomly inserted cards that they produced years prior into new packs.  The cards were hand signed by the player on card, stamped, embossed, and serial numbered.  For the Canseco Rated Rookie, there are three known versions:

Note: 10 years later in 2014 Leaf did buybacks as well, with the Canseco Rated rookie being signed and numbered to /32.

It is possible there are one or two 1/1s, but the Beckett checklist doesn’t specify if they are the Rated Rookie, The Rookies or Highlights.  Given the fact that there are likely over 500,000 regular versions of this card, and just 30 or so of the original buyback autographs, it can be super challenging to actually find one of these gems.  I had seen a few of the #/21 versions over the years, but never any others…

Early one morning last week, I was told by Michael E. of ACE Breaks that someone pulled a HUGE card in a pack.  Here is a little video to show what it is: 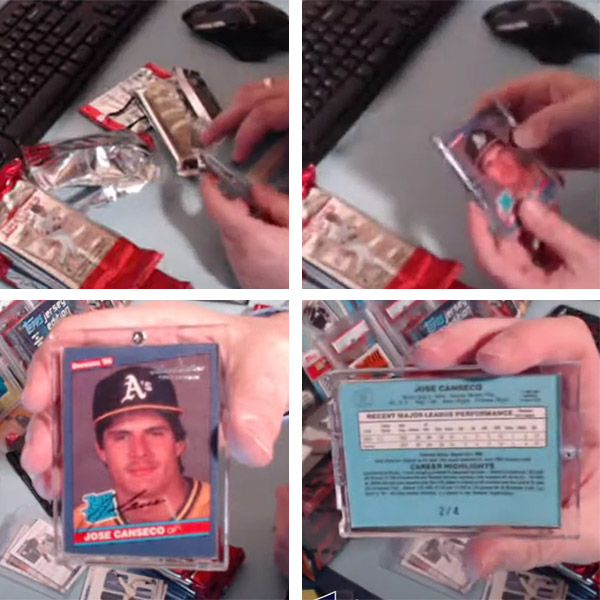 It is the 2004 Donruss Timelines Recollection Collection Autographs Buyback #/4!  It is one of the rarest Jose Canseco Rated Rookies, ever – as the serial number states, only 3 others are out there!  Here is a better look at it, with a fun little infographic I made (updated 2/25/21!): 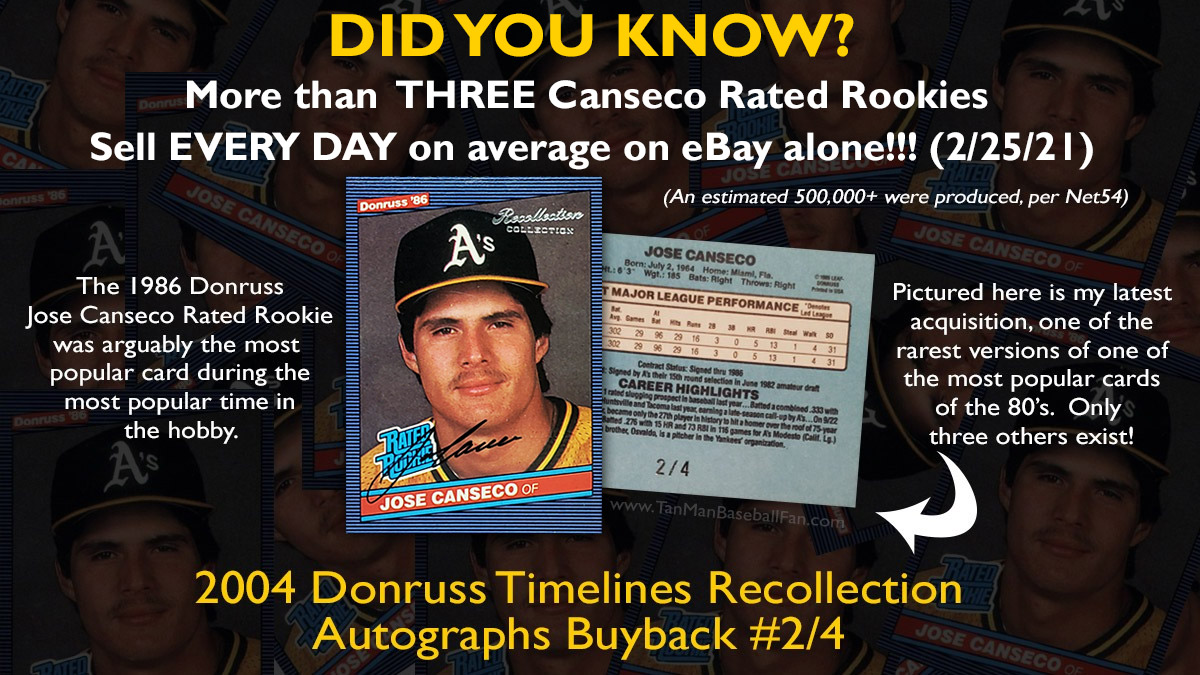 For obvious reasons, I’m extremely excited to have this, and had to share it with everyone while giving a little bit more information on one of the most important baseball cards to come out of the Junk Wax Era.  If you don’t have a copy, pick one up today! Keep your eyes peeled for the recollection buybacks as well – if you are lucky enough to get one, you’ll fall in love!