I Have Acquired an Honus Wagner Rookie!

First, let me say right off, no, I didn’t purchase a T206 Honus Wagner.  What I did pickup, however, predates the T206 by at least a decade *and* is significantly rarer!  This was definitely an Indiana Jones moment for me.

Let me introduce you to my newest piece:  The 1899-00 M101-1 Sporting News Honus Wagner Rookie!  I have only seen six others up for sale in auction houses this century, and half of them have significant amounts of it cut away.  This is one of the finest examples of this premium insert to ever hit the market! 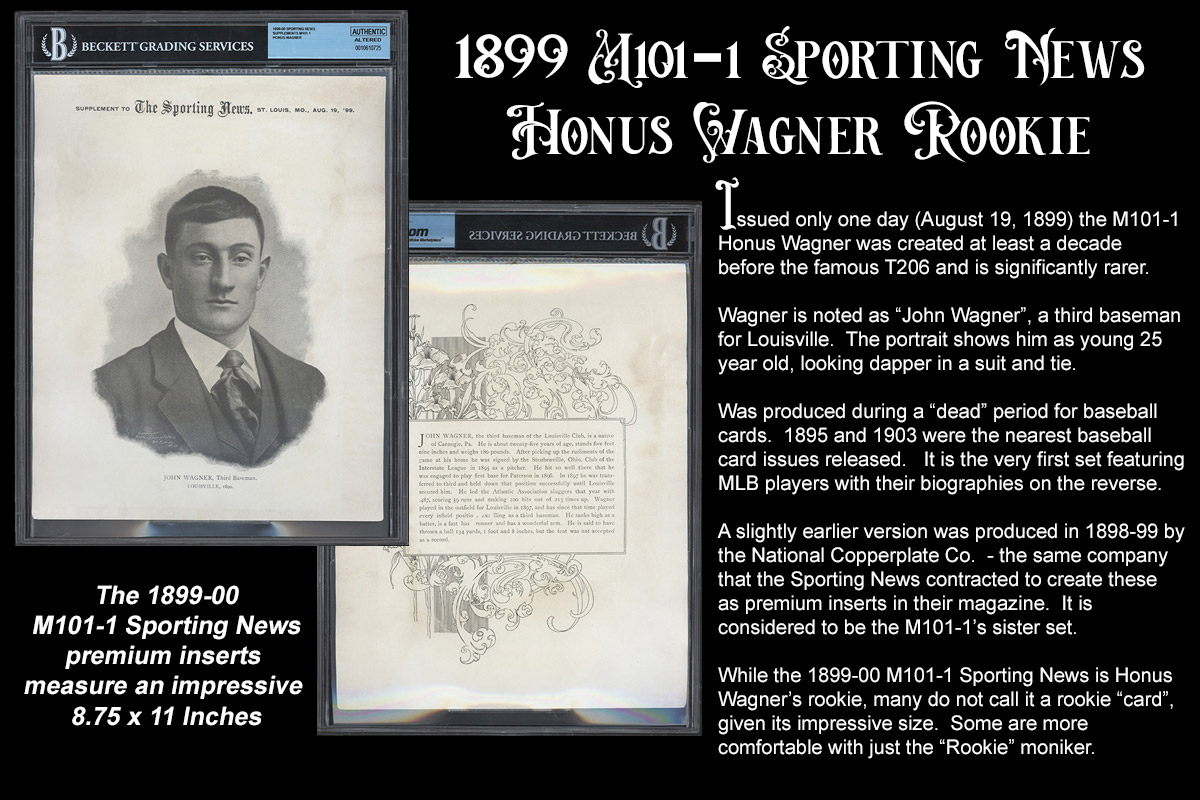 The funny thing is, I didn’t even know this existed last month!  I recently fell head over heals for the 1909-13 M101-2 Sporting News Supplements (the successor of the M101-1s), and was able to pick up my three favorites from the entire set.  I love the sepia tone, the way the photographer captured each player, and the large format.  They are fantastic conversation pieces and display beautifully.

With as rare as the M101-2s are, the M101-1s are much rarer.  They were created during the “dead period” of baseball cards.  When the ATC (American Tobacco Company) formed in around 1890, there really wasn’t a need to create any cards for advertising purposes, so with as wild as collecting was in the late 1880s, baseball cards nearly disappeared for a couple decades until 1909, aside from a couple issues.  The M101-1 set was created right in the middle of this time period.

I was looking online through some people’s Honus Wagner pieces in their collections, and noticed someone posted the Wagner rookie.  It felt like I was casting my eyes on the Mona Lisa for the first time!  How in the world could a private individual have something so magnificent as an Honus Wagner rookie – from the 19th century?!  Shouldn’t that be in a museum somewhere???

Merely knowing that Wagner had a 19th century issue rookie was thrilling to me.  It fuses two key time periods – a time where the likes of Cap Anson and King Kelly ruled the diamond, and a time when Ty Cobb and Babe Ruth were household names.  Honus Wagner was considered the best player on the planet before Cobb entered the scene, and this piece feels like it gives these two time periods some semblance of continuity.  I always think of Wagner as an early 20th century guy, leading the Pirates to victory over Ty Cobb’s Tigers in the 1910 World Series. 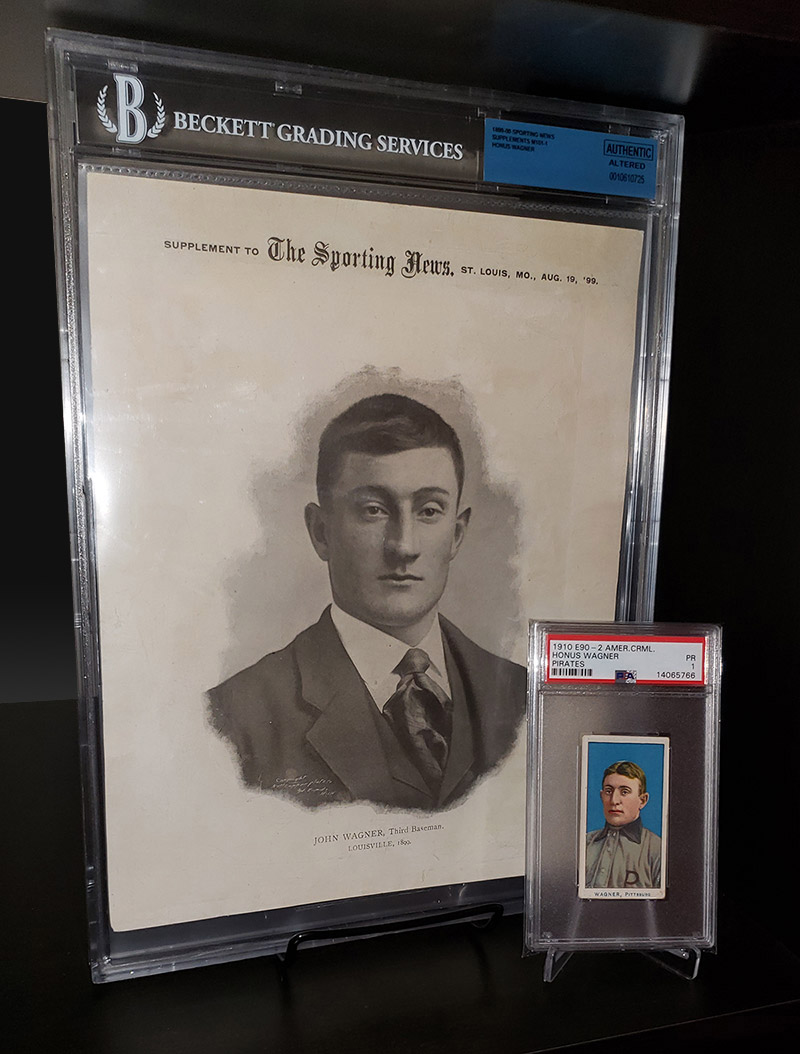 If you don’t know anything about the Candy Wagner, here is a little information for you.

The E90-2 Candy Wagner is my favorite card of his by a long shot.  I love that it utilizes the same Carl Horner portrait that the T206 has, and am a big sucker for the beautiful bright blue background.  I was extremely excited to display it with the Wagner rookie.  Unbeknownst to me until I started writing this article, I found out that the date I purchased the E90-2 Candy Wagner was exactly 120 years after the release date of the 1899 M101-1 Sporting News Honus Wagner!  August 19th, 1899 – August 19th 2019!  Talk about a connection!

Shown below are a few shots of how the Wagner rookie displays with some of my other large format pieces such as my 1888 Allen & Ginter album with set, 1909-13 M101-2s and part of my 1889 A35 Goodwin set (in case you missed it, these feature some of my custom work you can see by clicking here.) 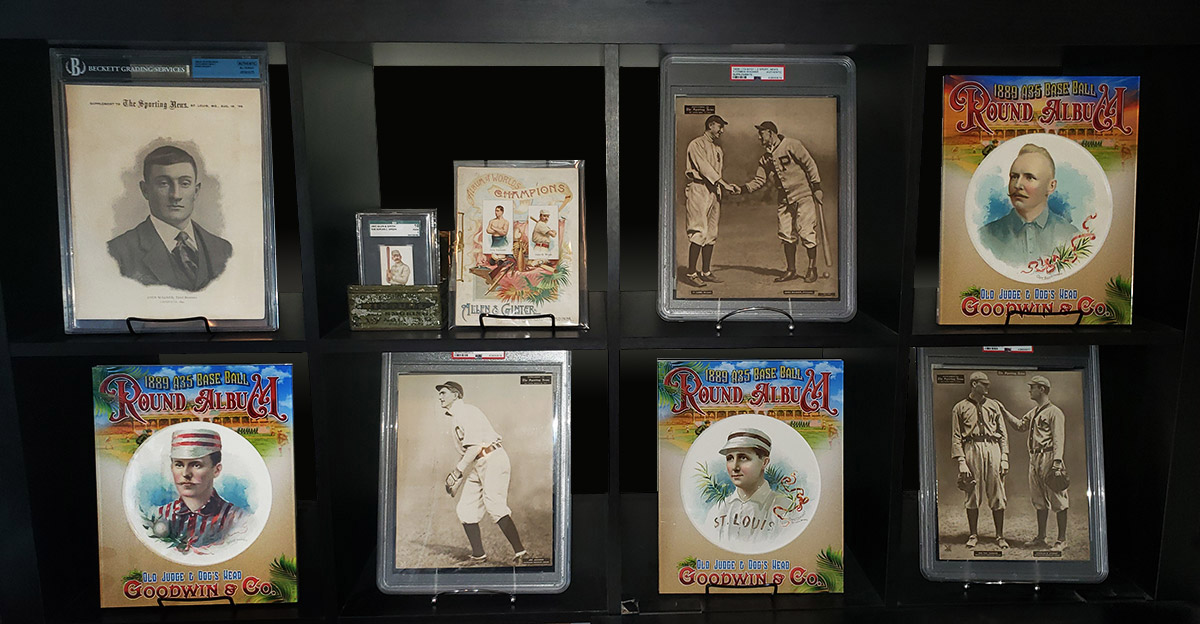 The more I get into displaying my collection, the more I realize how impressive larger format pieces are and how much I love them.  They present beautifully and I get so much more enjoyment out of them than I do with many cards that just sit in a box. 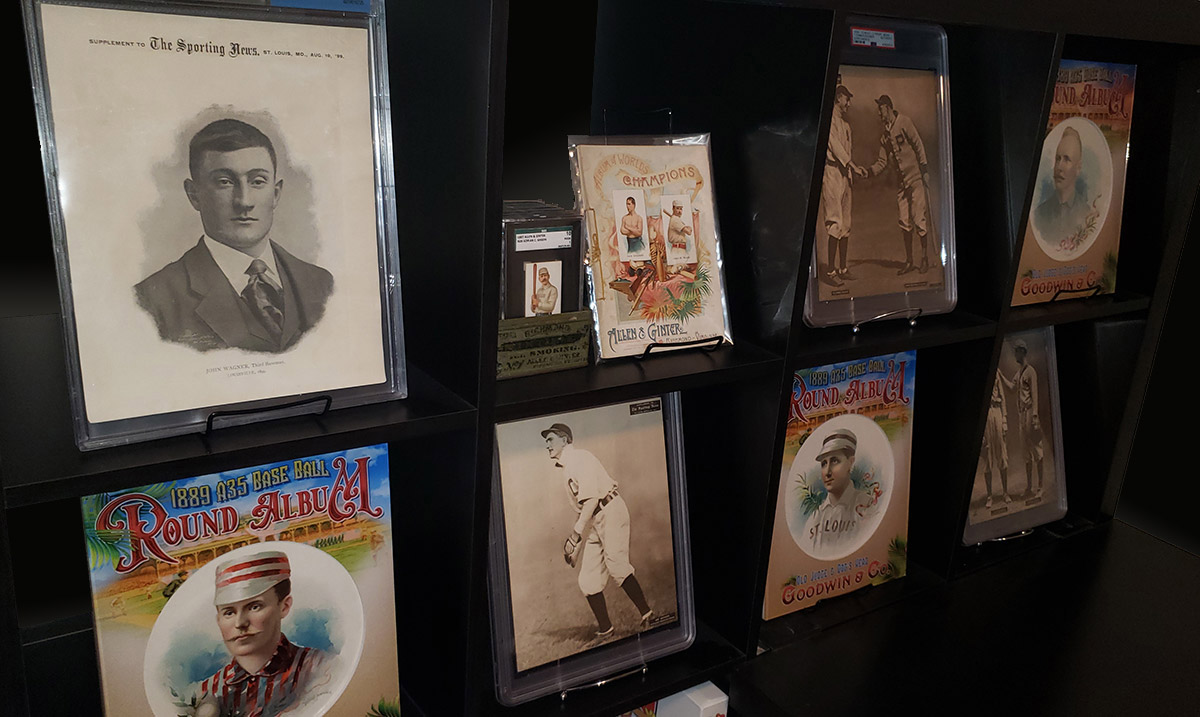 To think this cabinet once held the world’s largest unique Jose Canseco baseball card collection, and later, a bunch of 1980’s wax boxes.  My, how times change!

So, there you have it, my 1899 Honus Wagner rookie card … errr … rookie 🙂  While I still am dumbfounded that this piece isn’t sitting in a museum, I’m super thankful to have it in my own personal collection to enjoy.  It helps me to pretend I have a small museum of baseball history all to myself!  It makes me want to party like it’s 1899.