When I Fell in Love with 90s Cards

When I came back to the hobby about 15 years ago, like most, I set out to capture the cards of my youth.  I completely missed the 90s insert & parallel craze … in its entirety.  Eventually, I was seduced by game used cards, and ultimately ended up becoming a pseudo dealer.  Over the next several years, I bought & sold cardboard of all types, while becoming educated on the various different types that were created during my hiatus.

In 2013, I picked up a 90’s collection, and like all other collections, I split it up and sold them.  Then I noticed some scans of a few cards I sold on eBay – like me, he was a pseudo dealer, and had some 1997 Pinnacle Certified Mirror rainbows of Jeff Bagwell & Craig Biggio on ebay.  They looked beautiful, and the price was right, so I bought them back!

This is the first time I remember ever truly falling in love with how a card looked from the 90s – rather, it is the only time that sticks out to me.  One of either of the three would not have captured my attention quite like all three together did.  Here are some scans: (They are small – forgive me, they are from 2013!)

While I love Biggio & Bagwell, I wasn’t actively collecting anyone, so eventually I sold them again, but it was their beauty that caused me to buy in the first place.  By January 2015, I was “all in” when it came to collecting Jose Canseco cards and bought out a former supercollector.  Among the collection were the three 1997 Pinnacle Certified Mirror Jose Canseco cards.  I was very happy with them, but it was different – they got lost in an ocean of other amazing cards.  It is crazy to think that this could happen, but it does all the time.  When picking up huge lots, some gems can feel a whole lot less special, if that makes sense.

To be truthful, this has been a common theme I faced during supercollecting, on a grander scale.  I compiled, compiled, compiled.  Always on the lookout for the next card I didn’t have, and not fully appreciating what I did have – maybe even not being able to fully appreciate what I had.  For years, I was sitting next to the world’s largest unique Canseco card collection, and there were true gems throughout, but they just didn’t get the attention they deserved, because it was more about crossing off cards on a checklist.  Because of this, during my sell off, a lot of great cards left my ownership without much thought … until I came back.

Time flies, but yesterday marked five years from hanging with Jose at his house and later this month will mark two years from when I decided to move on from supercollecting his cards.   I keep thinking to myself, how can either of those monumental events in my hobby “career” have been so long ago? 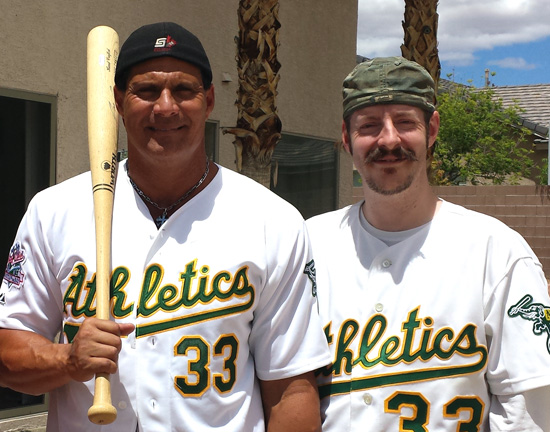 Heck, it has already been almost a year since I revealed what I did with the money from my Canseco collection.  Even much of what is shown at that link has now been sold, and put into some true “blue chip” vintage cards, which I have fallen in love with.  I have some more, but these are the head turners.  Note the low grades on most, but extreme eye appeal.  As far as non-Canseco cards go, this is my “dream team” at the moment.  I have realized that for my collection, quality trumps quantity every single time.

Nowadays, with a new mission to only pick up Canseco cards that I truly care about and love, I’m able to detach myself from any “requirement” to check anything off of a list – and sometimes I sell meaningless (to me) Canseco cards to intentionally break up a rainbow, because I don’t want to get into the habit of building rainbows that have meaningless cards in them.  Instead, I’d rather be satisfied with none, just one or a couple if they are special enough – and build my own rainbow, free from any “official” checklist “requirements”.

Even though I had nearly “everything”, I’m so much happier with collecting now – and even my collection, though it is much smaller!  Getting off the “gotta have it all” treadmill has helped tremendously (so far, 84 Canseco cards have been made in 2020, with 21 of them being 1/1s!).  I can sit back and fully enjoy & appreciate what I do have, which is frankly, new territory for me in collecting.  I’ve always been a “mover and shaker”, buying, selling, trading, etc.  But now, I am just super happy with what I have.  That could easily change at the drop of a hat, I guess, but for now, I’m extremely satisfied and thankful. 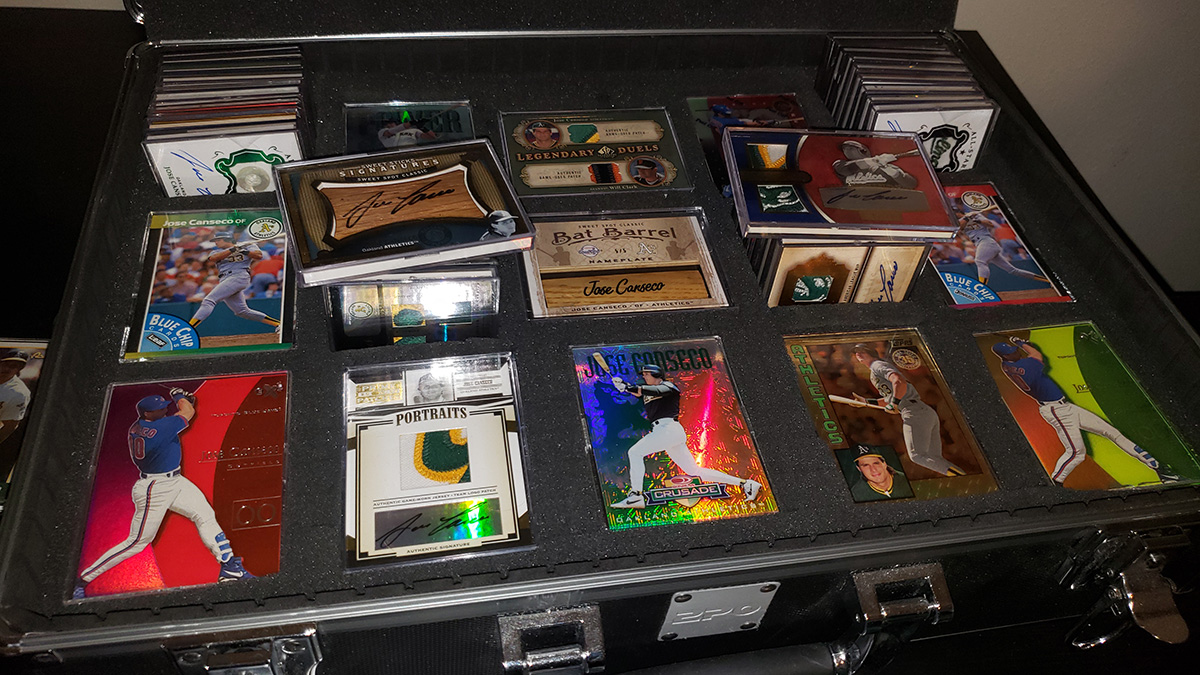 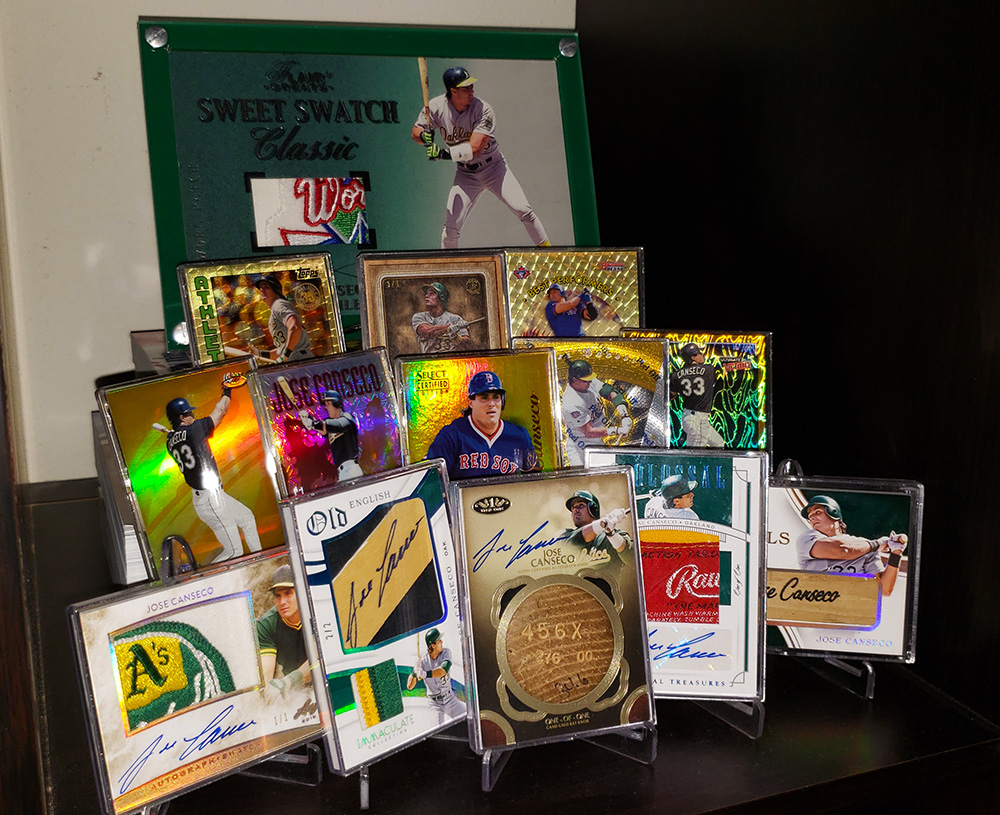 I am laughing at myself, because it looks as though history has repeated itself.  As I look back at my blog postings, I find one from 2013 when I sold off my childhood Canseco collection to “move on”.  I decided to have a tiny little “cubbie” made of some Canseco mementos.  The more things change, the more they stay the same! 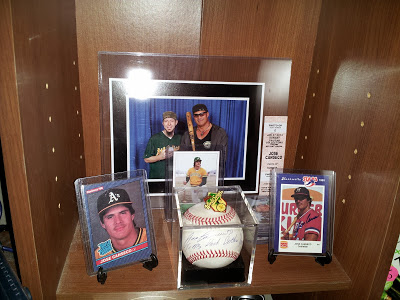 Through all of this, I found out the joy of going from owning no bat barrels to one bat barrel is much more exhilarating than it is from going from one barrel to two, three or four.  The “gotta have it all” mentality is long gone, which is incredibly freeing!

I’ve been looking for over a year and have been unable to find the 1997 Pinnacle Certified Mirror set to get back into my collection … until yesterday!  I never scan cards, but made an exception for these, because I wanted to recapture the same feeling I had when I found my old Biggio & Bagwell rainbows years ago.  For the first time, I’m able to fully appreciate them – the rainbow that made me fall in love with 90s cards in the first place: The 1997 Pinnacle Certified Mirror Rainbow.