Join me LIVE in going to Super Collector Status … plus … customs!

Today has all the makings to be a big mail day for me, and my PC. Something that could potentially make me go from being a Canseco collector to a Canseco SUPER collector. Why do I say that is could, and not that it is? Well, that is because as I type this, I am waiting for the mail man to deliver my 30 pound package to me. It is coming from up north, and as of yesterday morning, the USPS website showed this:

I was very skeptical about this, because – how can a package come so far, so quickly? It is my hope that it happens today, as we have a very busy weekend full of birthday parties, and other things. I won’t let the cat out of the bag too much until it is hear, but let’s just say that it took me probably the better part of 10-15 hours searching online for some Canseco cards I did not have.

WIth as much as I talk about Jose, you’d think I’d have a mammoth collection. Something beckett-worthy, (which was a goal of mine as a child – to be featured in beckett!) but that is just not the case. As a matter of fact, if you have been reading my blog / articles for a while, you know that I had sold 99% of my Canseco collection last year to “start over”. All of the cards and memorabilia I had collected for the better part of 25 years were gone. There simply weren’t any cards worth oohing and ahhing about. The main reason for this is because I rarely buy anything to keep, and have a hard time justifying keeping something that is worth anything of significant value. Perhaps that is why I like creating custom cards so much!

The collection I had amassed was full of nickel and dime cards. The “body of work” I had acquired since the late 80’s was merely doubles, triples and beyond of cards I thought I didn’t have. I had no checklist to refer to, or anything. As a result, I ended up just stockpiling all things Canseco, and figured “one day” I would make a list. The problem was, that there were hardly any gold cards, artist proof cards, refracors, serial #ed cards, etc. Just a lot of base with tons of multiples. (No one can have too many ’88 donruss Canseco, right?)

I vividly recall going to a card show as a child. I sat at a table and spent maybe 15-30 minutes pulling out all the Canseco cards I wanted. I asked the lady behind the table if she would take $8 for them. She laughed at me. She laughed! To make matters worse, instead of answering me, she nudged her husband and said “You hear that, Bob? This kid asked me if I’d take $8 for all those Canseco cards!” As their ridicule and laughter echoed, I turned around and walked away in defeat.

That incident did not deter me, but it did not get any easier. Ultimately, as the years went by, I left the hobby, and the Canseco collection sat in my closet, gathering dust. One day, during a huge hurricane we had here, the power was out and I had nothing to do. So for the first time in forever, I took out my Canseco collection to look through it all, and start the arduous task of organizing it all.

Then, my sister in law came over.

I don’t know why, but for some reason, I felt a tinge of embarrassment…a little bit of shame. It did seem odd at the time for me, a grown man, to be sitting in the middle of hundreds of cards of Jose Canseco. Oh well. Nowadays, I am consistently neck deep in cardboard, and everyone knows it!

Since I have come back to the hobby, I have told people I collect Canseco only, and basically sell everything else. Many people look at me strange and say “why do you collect him???” Dude … he was like … the man! Mr. 40/40! Jose Can-Crank-oh! (Or, as my friends growing up would call him Jose Can-Strike-Out).

YEAH!!! It says it is out for delivery! But … but … what if they are wrong? What if it is too heavy and I will need to goto the post office TOMORROW to pick it up? What if the cards are damaged? What if….

Yeah, this is kind of driving me nuts. Anyway, fast forward to nowadays. I finally have a checklist, and have been using it religiously. I currently sit at around 1,360 different Canseco cards. This time though, my collection has a number of “better, but not awesome” cards, such as some gold signature collectors choice parallels, some refractors, serial # stuff, etc. I used the proceeds of the sale of my childhood Canseco collection to finance my 2.0 collection. Many of them came from a “real” super collector.

A little over a year ago, another super collector put his collection up for sale. Ironically enough, it ended up being the first guy I ever met online who collected Canseco – probably in 2006-08…sometime in between there.

Every single card he had for sale in his collection was pictured online, so I spent a TON of time making a list of literally close to 1,000 cards I did not have already. It was really cool to be able to pick out some odd ball stuff that I had recalled as a child, but now it looks like I will have nearly all of the odd ball stuff. The stadium club cards were cards I already had, but not the first day verions. The studios, but not the press proofs. The Topps versions were mine already, but not the inaugural, opening day, o-pee-chee, versions, etc. The pacific cards were sparse in my collection, but now I should have several near runs of them. I gotta be honest – the anticipation for this package has kept me up at night!

That means the package is hopefully near 🙂

Ahem … sorry. I know, this is all over the place. No sleep and no tv makes Homer something something. (Simpsons reference).

Speaking of the Simpsons, I do have a few customs to show, and the Simpsons are referenced. Here are 4 cards I had been working on.

GOOD AS GOLD – I anticipate having Canseco sign in gold just above his name. 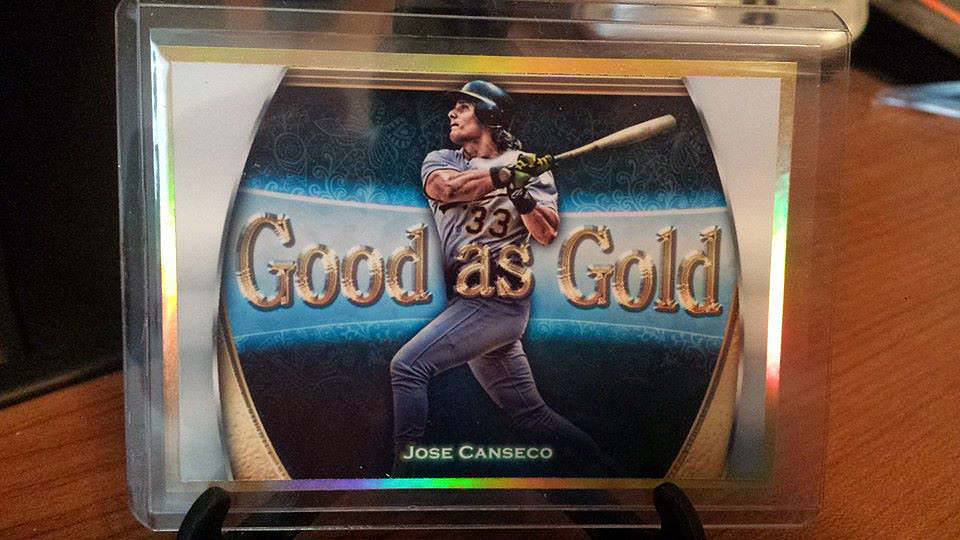 A PIECE OF HISTORY – I have been working on something similar to this. I have always been bummed that Jose didn’t have a card in this set. He didn’t because the criteria would be to have 500+ home runs. Ahhh…if only he was a part of some other type of club. AHA! The 40/40 club! The wood piece is just a placeholder for now, and I anticipate him to sign in blue in the bottom left. 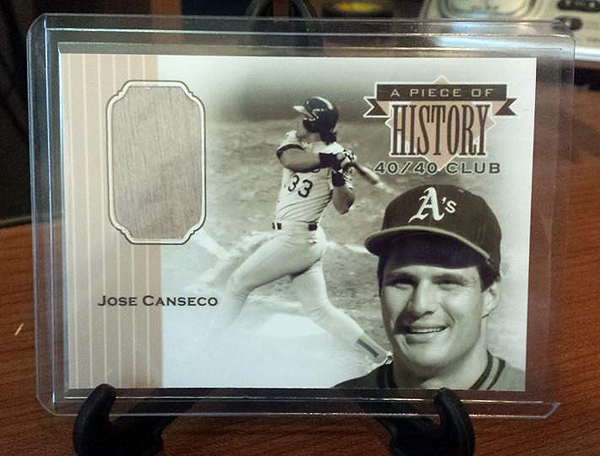 The next one, is my wife’s favorite. “World Series Memories”. The picture is of Jose and the A’s team walking off the field after the earthquake from game 3 of the 1989 world series. A memory every man woman and child from California probably remembers vividly. Heck, our house even shook a bit while we were watching it on tv. It is amazing to think of how much damage was caused, and about the lives lost…yet, at 9 years old, the most painful thing to me was the delay for game 3. 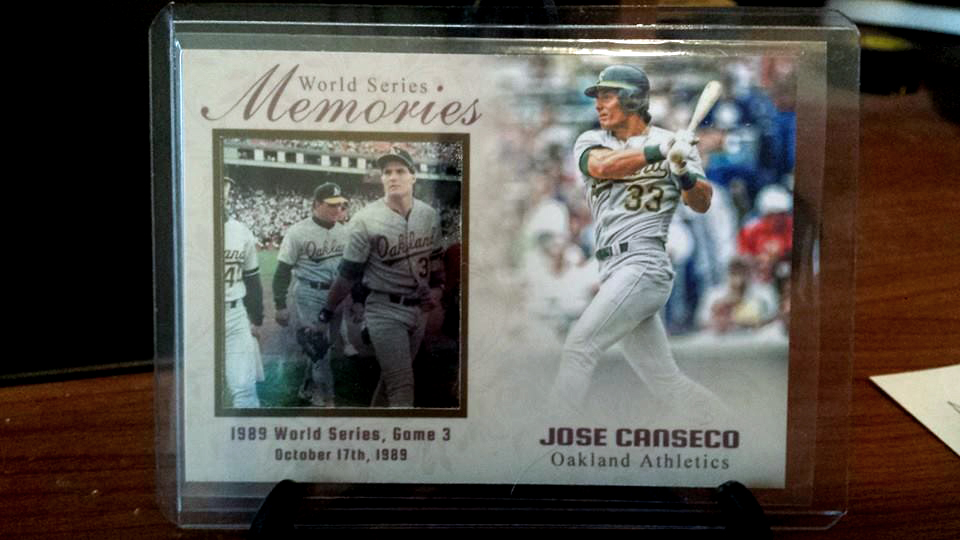 The image on the left is in foil, and I think it looks great in hand! It is hard to get a good position with the camera, so I tried a few things. 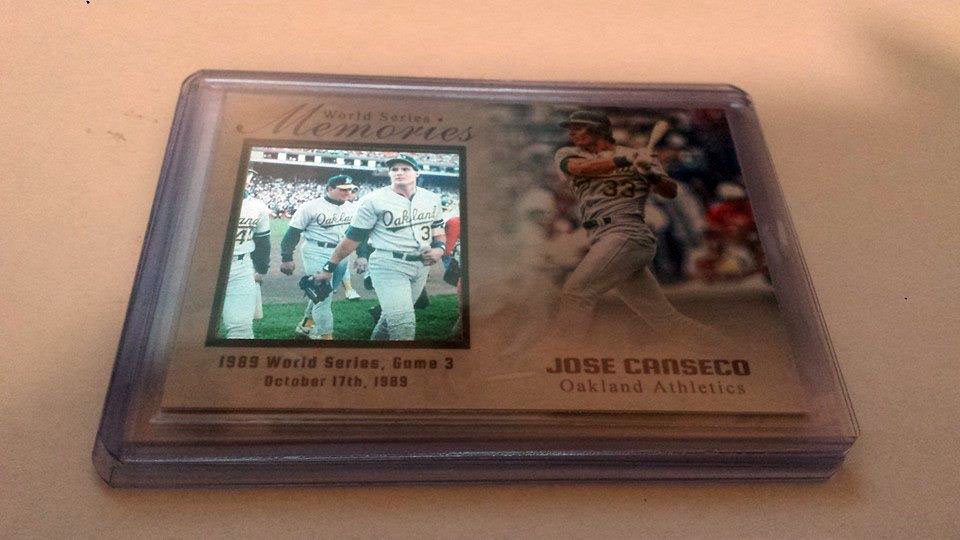 I actually used a previous attempt at a custom that I wanted to get Jose’s finger print, but apparently that won’t happen. Oh well. Here is my finger print with it instead, lol. 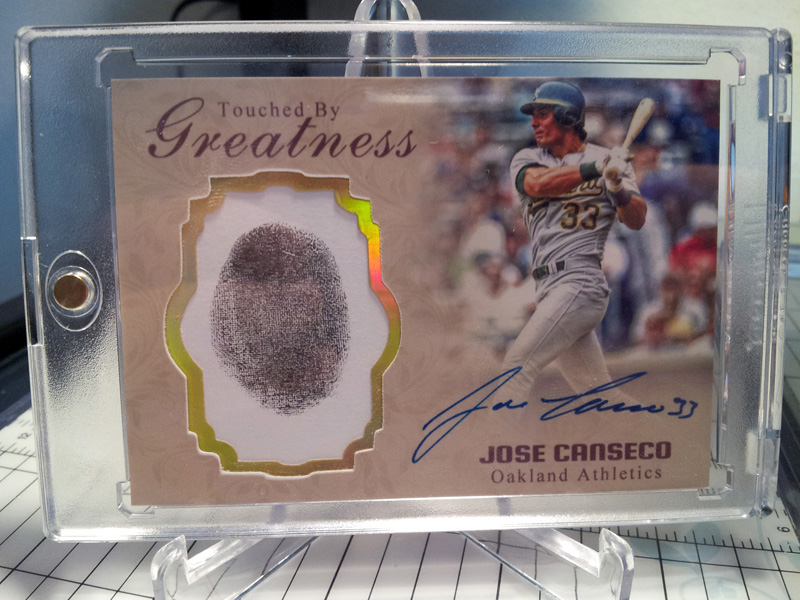 Finally, I decided to use your favorite super-hero and mine, to show the reflective properties of the left slide: Bart Man! 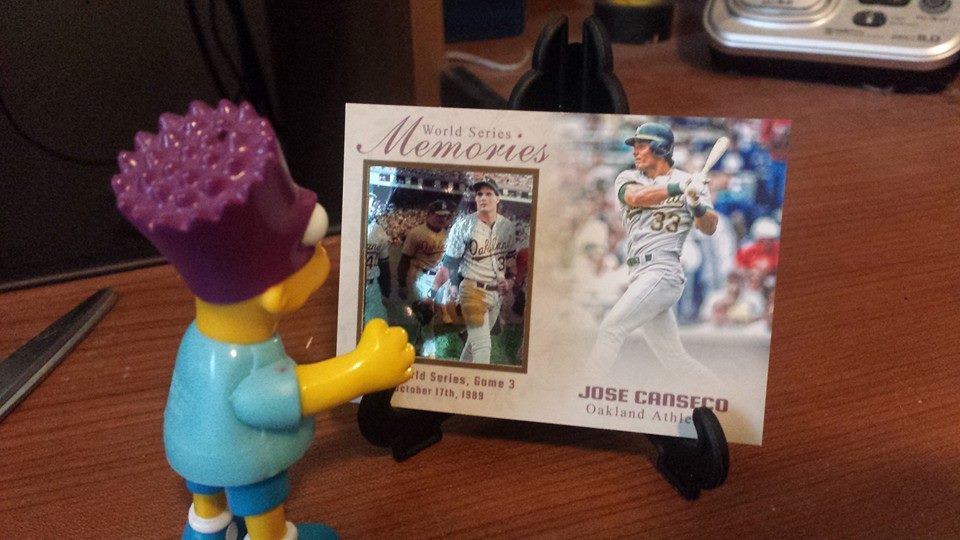 Why would I just bring in Bart man for this card? Surely, I had to bring him in on one more that would make more sense! 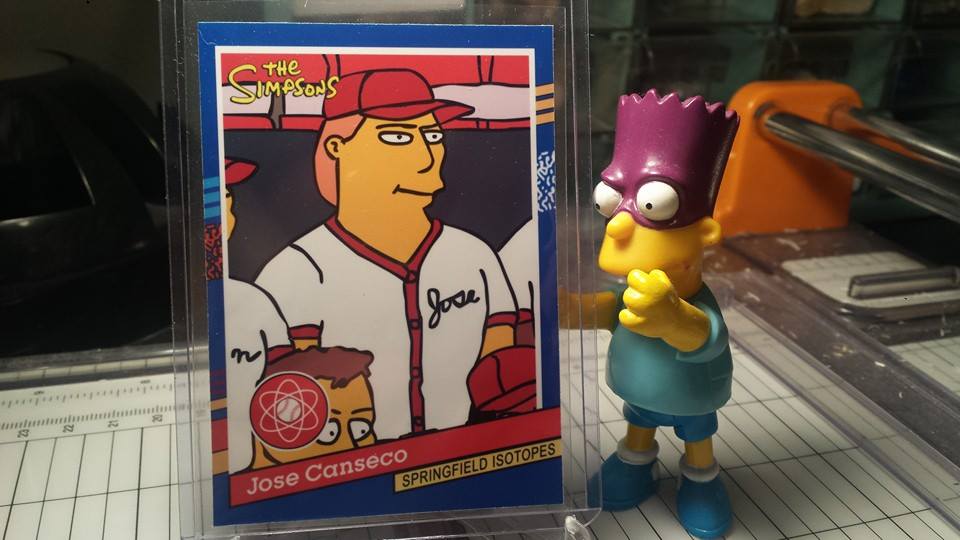 I love how the card turned out. Mainly because I’ve been wanting to do one of Jose from the Simpsons in the episode “Home at the Bat”, but all of the pictures online of him in cartoon form are HORRID. Absolute awful quality. I actually ended up having to do re-draw the entire thing. I am glad I did, because I think it turned out great. 1991 Donruss was a design that I enjoyed as a child, hated ever since (due to buying so much in my pre-teen years), and have just recently come to love again. It is so loud and so … ’90’s … that a Simpsons card matched it perfectly. 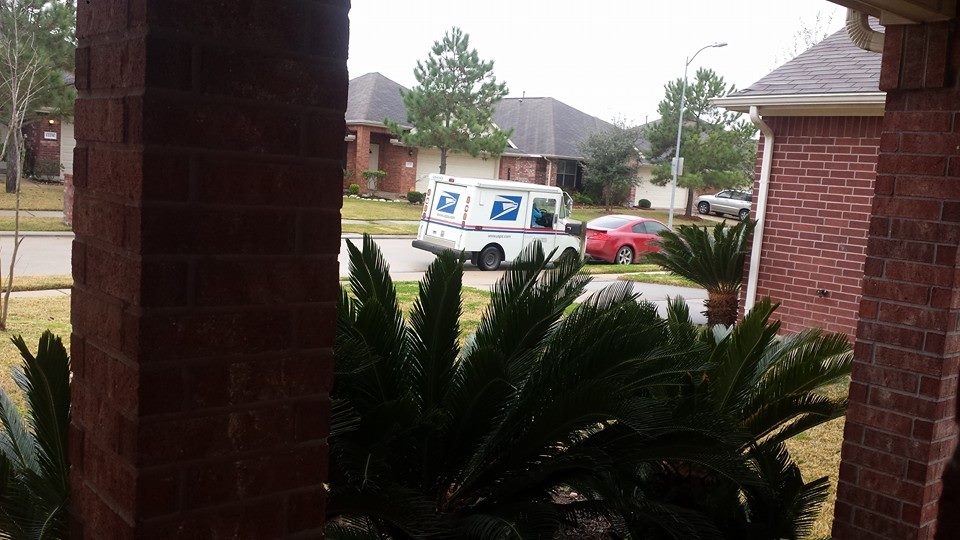 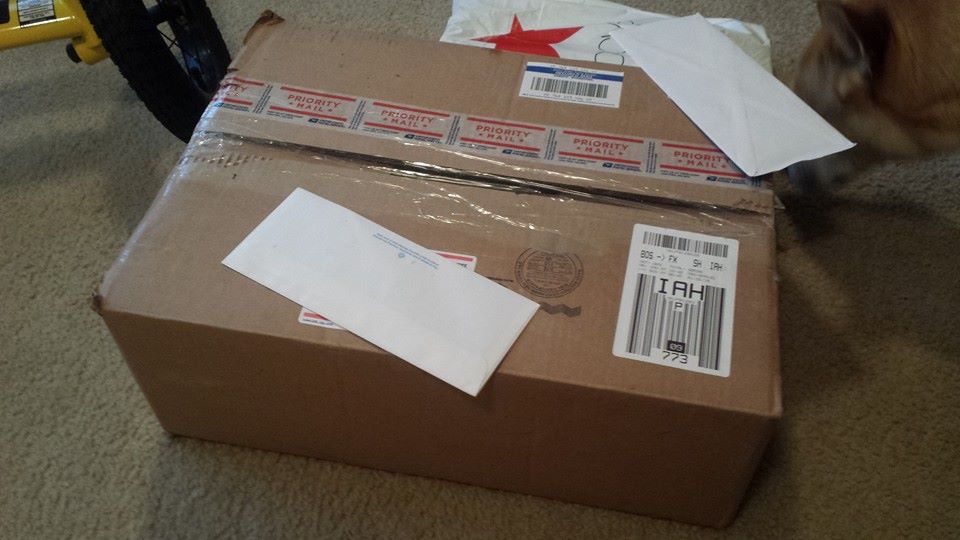 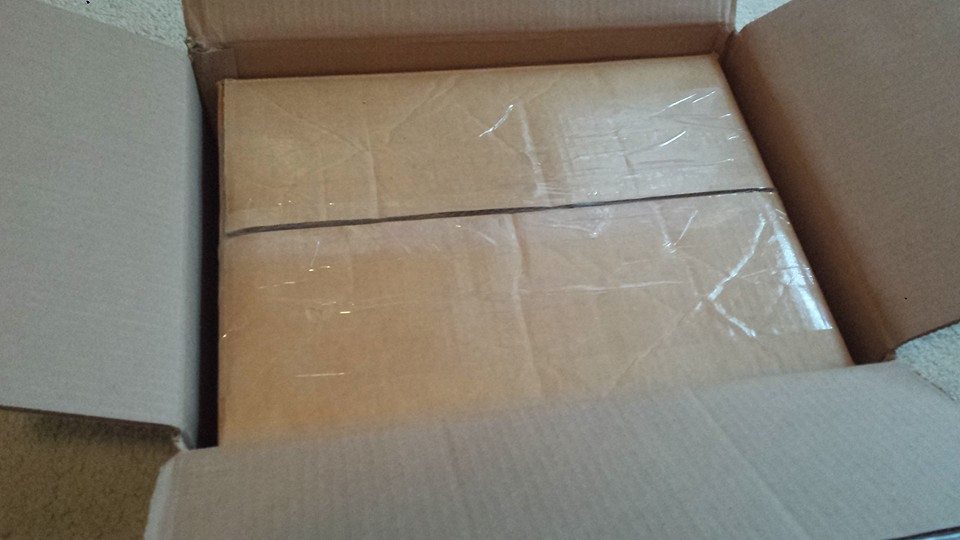 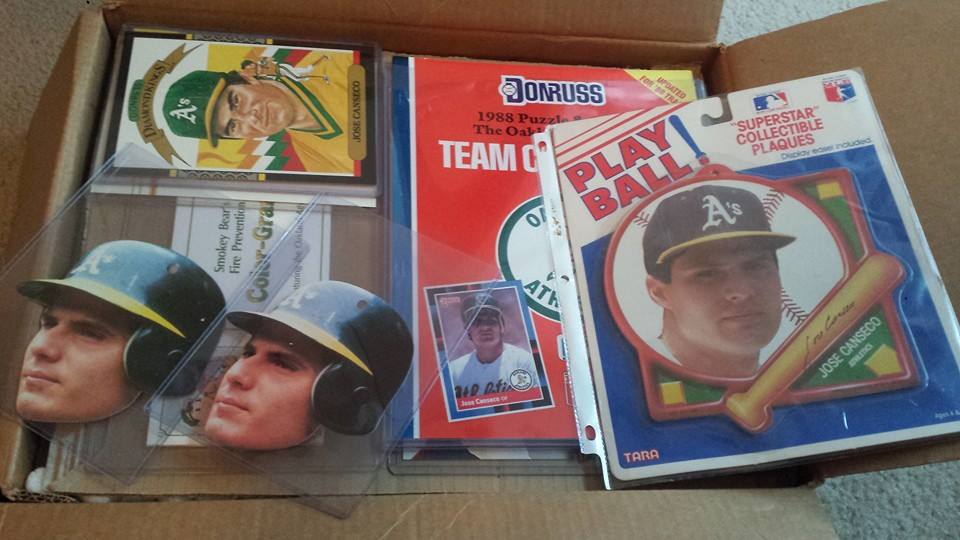 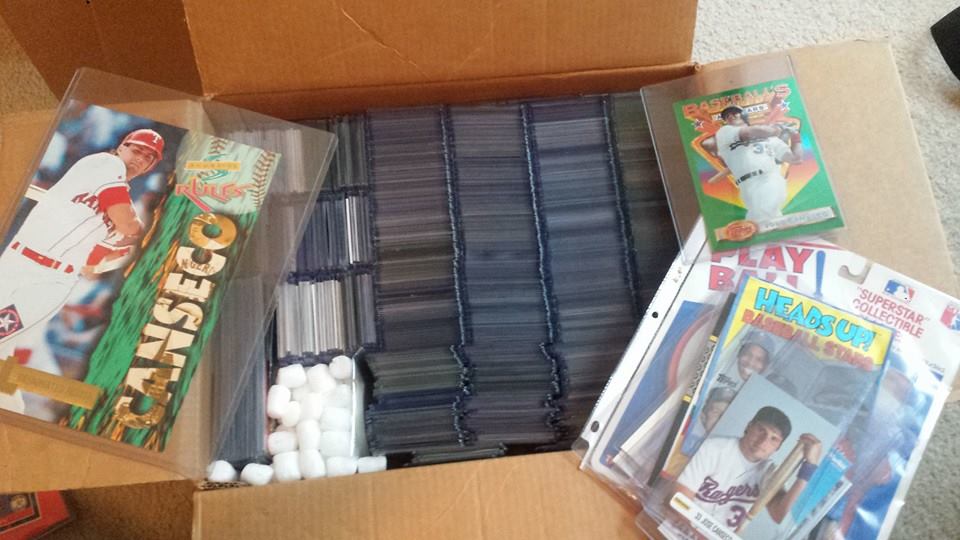 Let’s look at some of the notable ones. 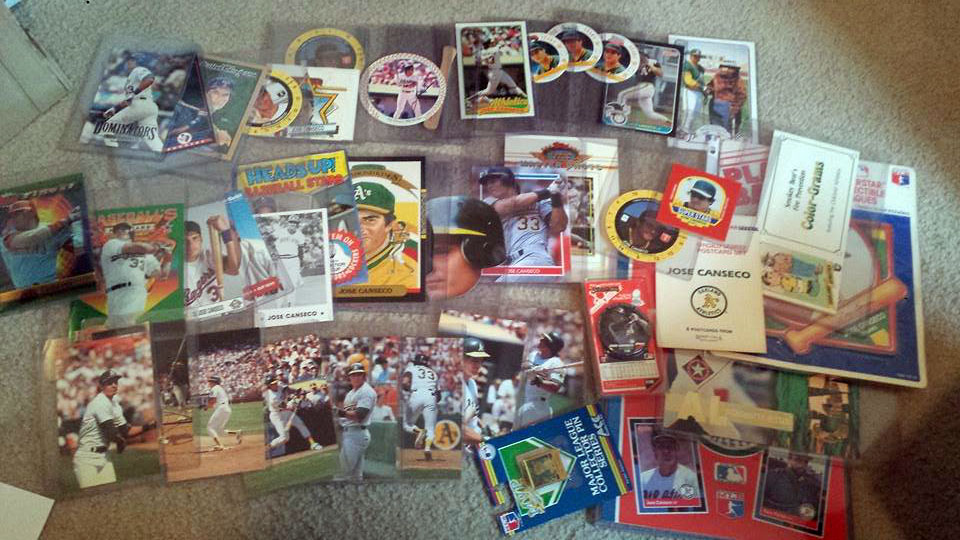 All kinds of STAR sets (I have a bunch already. Many fond memories of these from my past.) Out of my 25 years in collecting, I think I had only 3 sets … now, I have almost all of them. 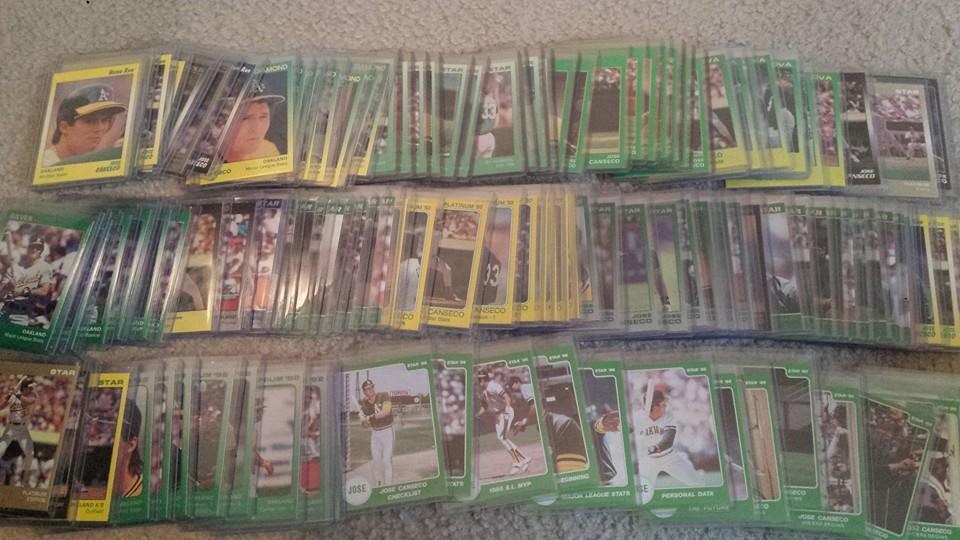 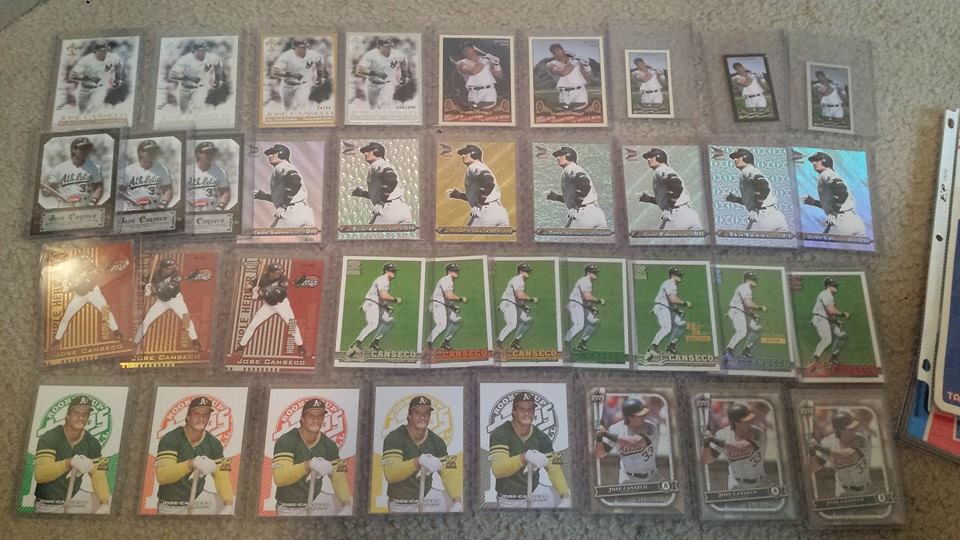 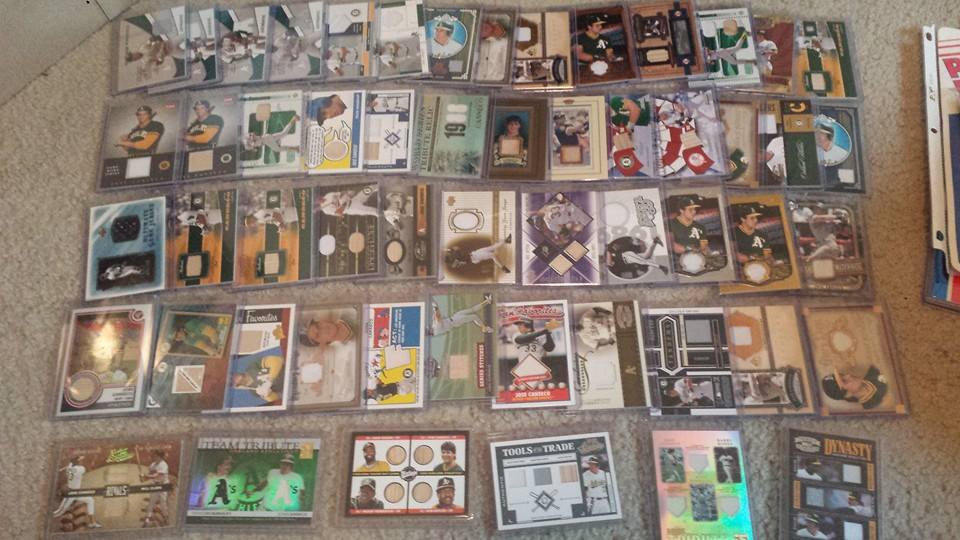 Some of my favorite cards from the game used stuff: 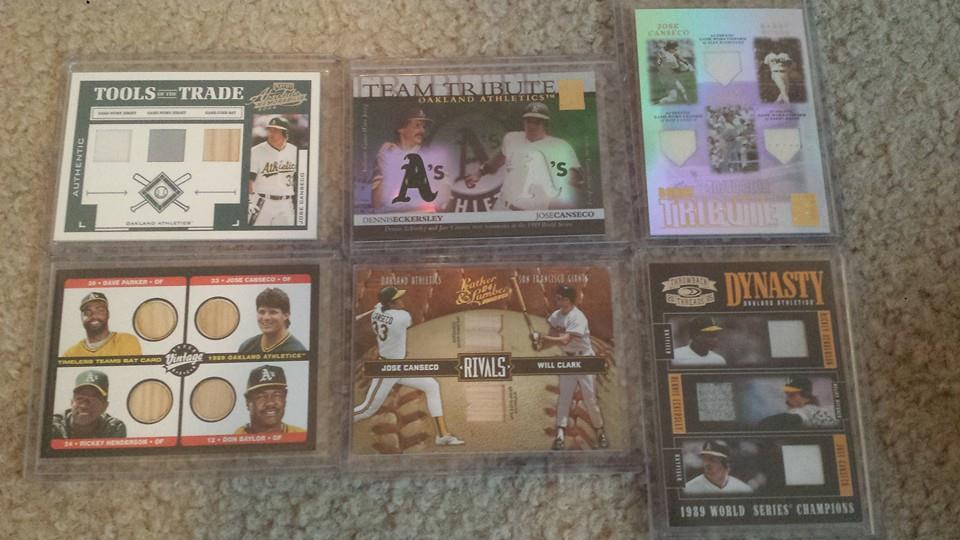 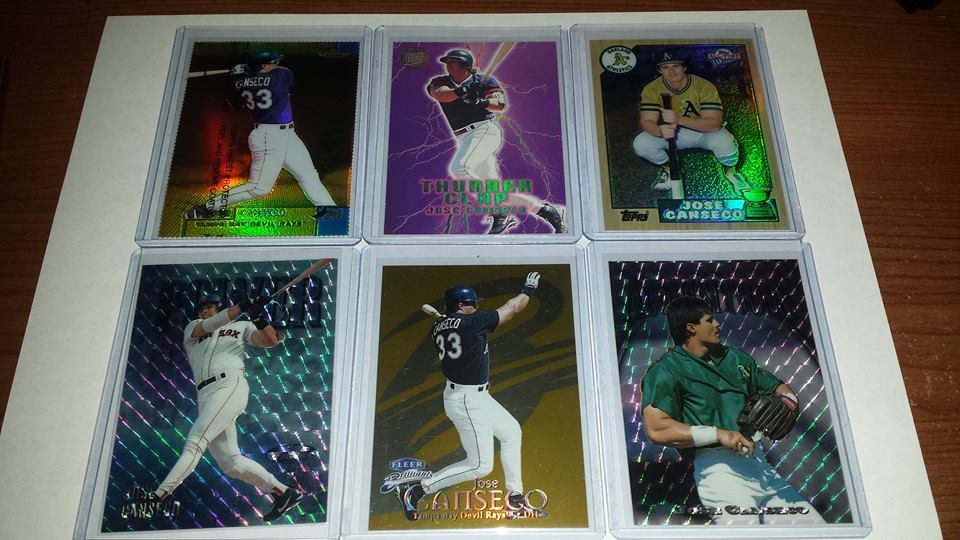 Flair Legacy cards (these are the ones # to 99) 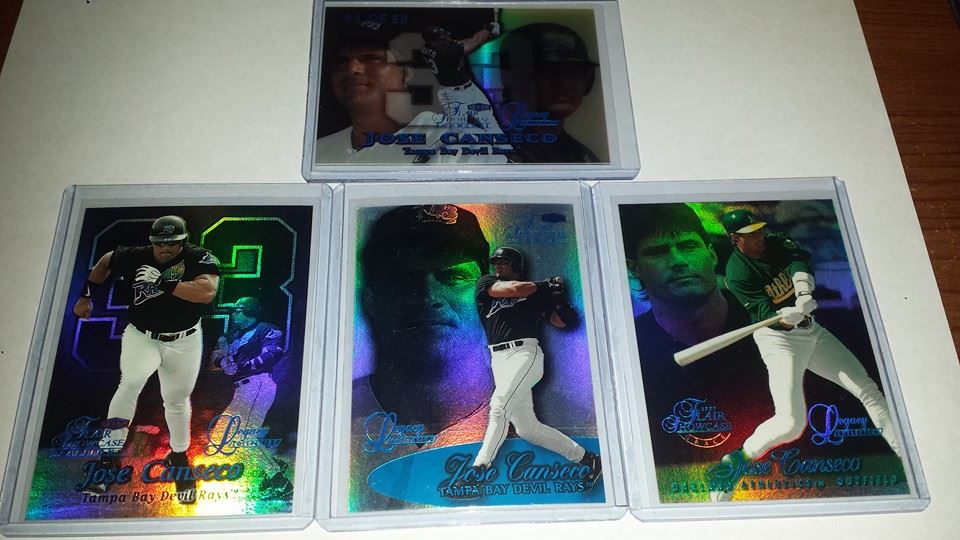 An oddball card (I have always wanted one of these ever since I first saw one on ebay) a 1991 Donruss preview card (never saw one of these before), Tek blue, Power Rally die cut and a circa RAVE 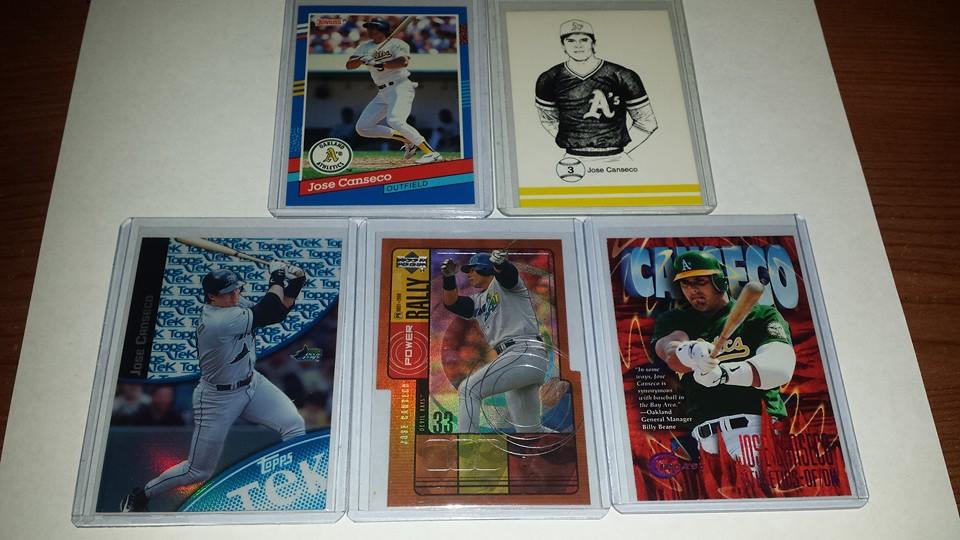 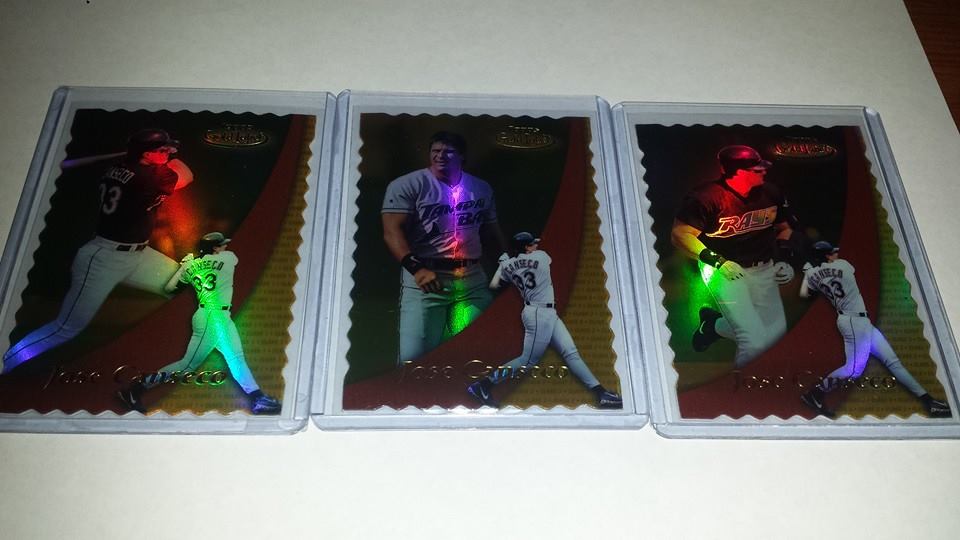 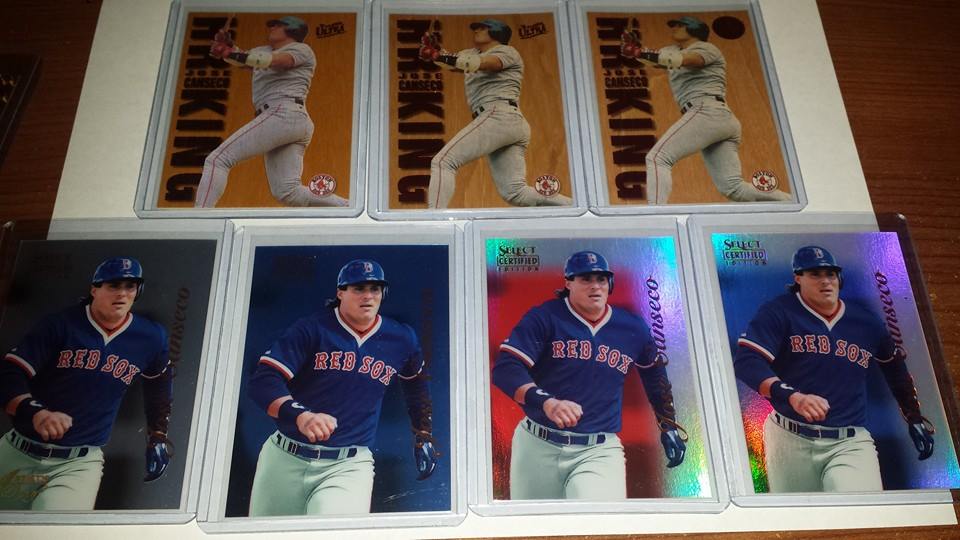 PLATINUM Medallion Ultra cards (The third one in the pic is one I saw on ebay a while ago. I offered the guy $20, and he countered at $25. I scoffed … it ended up going for $60-80 if I recall correctly.) 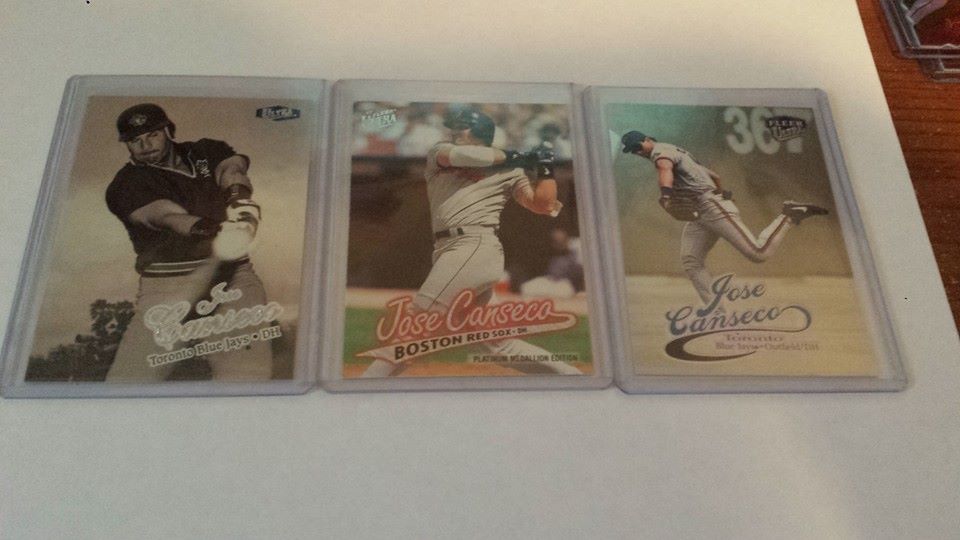 Perhaps my favorites out of all of them: 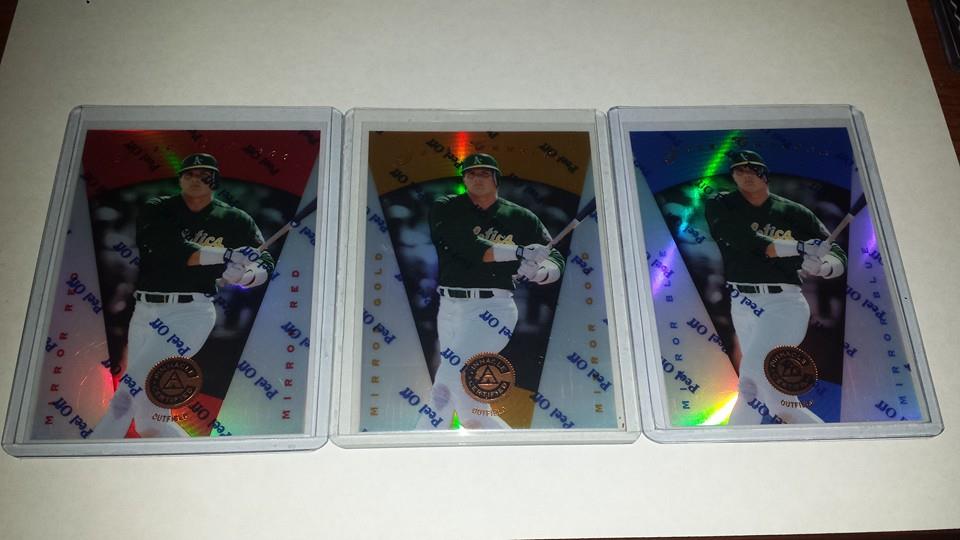 The mirror red-blue-gold set was something I never thought I’d have. They are some of the most beautiful rainbows I think that can be made. I bought a large insert collection last year, and found some of these of other players and thought to myself how cool would it be to have these from Canseco?! Well, here they are! 🙂

That about does it for the latest acquisition! The vast majority in this purchase are not shown, because that would take forever. I have officially gone from around 1,360 to probably around 2,300 different cards – and now I’m really interested in getting more! This whole thing has been financed from the profits of some other cards I sold. Rememeber the million cards? Well … they are all gone. I have very, very little left. We have our garage back! Stay tuned though, as that is about to change. I am always on the look out for more deals. Speaking of which, I have been able to find some deals on Craig’s List. If you are interested, let me know! 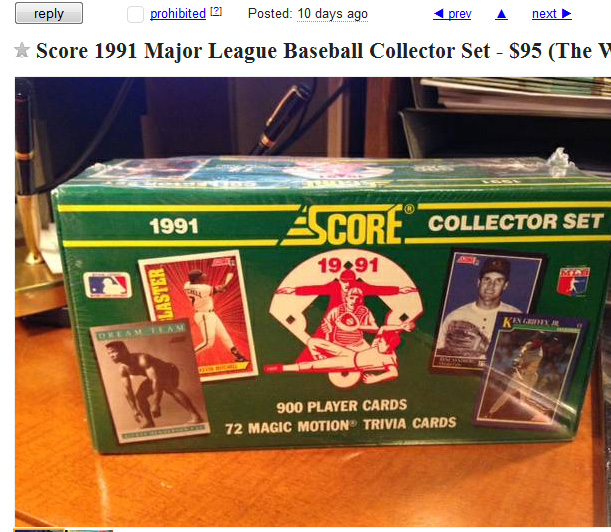 I also caught wind of another collection someone was selling on Craig’s List. They said they had $5,000 worth of cards, and were willing to let it all go for the low price of $2,500. When asked what the collection had, they rattled off a few $8 sets … and those were the highlights!

Perhaps this takes the entire cake, though. Someone reached out to me saying they “have like $60,000 worth of cards, but would be willing to negotiate”. I asked for a picture and description. They mentioned most were from the 80’s and here was the picture of the collection: 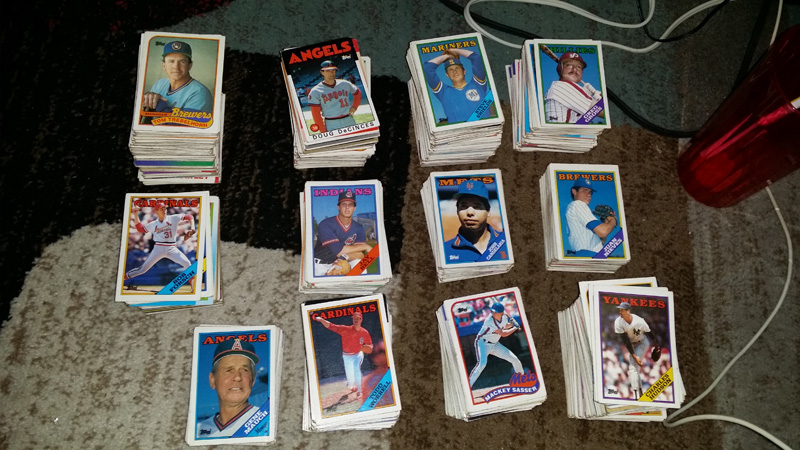 People never cease to amaze me. I don’t know what happens more – collections offered up to me that I wouldn’t pay $5 for that people think/say are worth thousands, or ridiculous & unethical photoshop requests (the last one being for me to add a name to an electricity bill – not that bad, considering I’ve had people ask me to forge prescriptions and even a lawyer request I photoshop a man in a picture with another woman at a hotel!)

I know this posting has been all over the board (as usual), so I’d like to wrap up with a pic of the last 4 customs together in one pic. 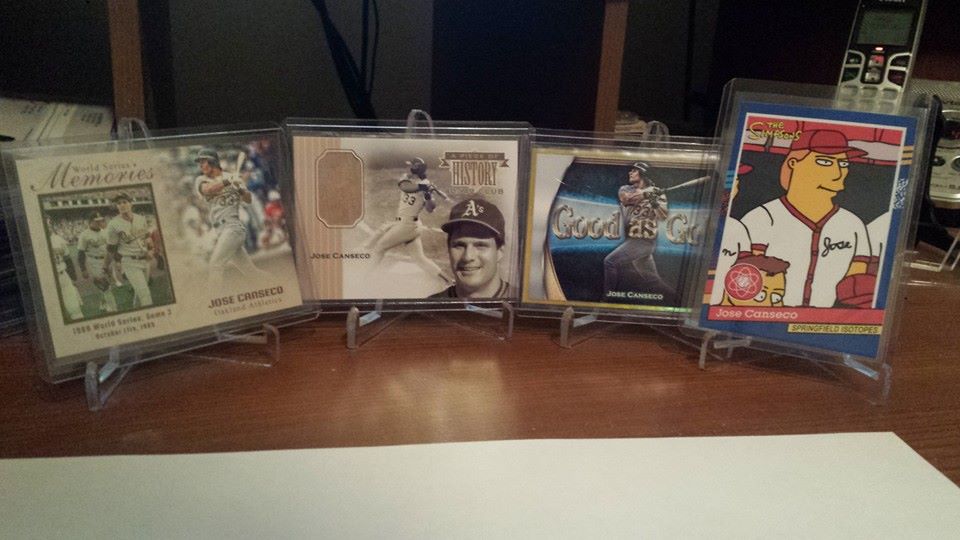