Over the weekend, I answered an email from someone locally who had a collection of cards they were looking to sell.  I requested some pictures, and most were of the usual junk wax variety, but a lot of it was unopened, so I figured what the heck.  I wasn’t looking for anything super exciting, but these are fun at the very least to display.  I drove over to his apartment, and he promptly let me in after I dialed him from the gate.  It was a nice complex, but I was NOT looking forward to making the 3 story climb back and forth with these cards.  The guy’s name was Jerry, and he was completely decked out in hipster garb.  He said his dad left him with these cards and just wanted to get them out of his kitchen.  I agreed to take them if he would agree to help me bring them downstairs.

After we loaded it all up in my minivan, he started talking about almost everything under the sun (and even almost forgot to take the money!)  He told me about his Vespa that he was restoring, and how his girlfriend hates it.  After a while, he really opened up and spent literally about 30 minutes lecturing me on how the earth was flat.  He didn’t crack a smile – this guy was serious, so I decided I better just smile and nod myself.

When he took a breath, I figured it was a good time to tell him that I had to get going.  Before I could, a blonde woman with a ponytail came jogging out from the walking trail behind where I was parked.  She said hi to her neighbor Jerry and joked about how he finally found a sucker to take his dad’s baseball cards.

Jerry introduced me to her, and she said her name was Evie.  She turned to walk to her apartment, but then turned back around and told me she had a box of cards that her ex left behind.  Evie asked if I would be interested in buying it, because she had no desire to contact her ex (who she explained as clinically insane).  I said I’d take a look, but you know the drill – when is this situation NOT a shoebox full of beat up 1988 Score?

She led me into her apartment which had a very strong smell of perfume mixed with cigarette smoke (thanks to her ex) and showed me a brown box in the corner.  It appeared to be sealed and said Allen & Ginter on the side!!  I wasn’t sure of the year though, but she said it was supposed to be 2018 and was a “special” case that her ex kept going on and on about.  She said she wanted $1,000, but all I had on me was $750, (having that much on me was PURE luck, as I was planning on buying something else that day which fell through.)  She agreed and I went home with it, curious about the case.

I was going to sell, but decided instead that you only live once, so I busted it wide open.  Much to my surprise, the very first pack yielded this!!! 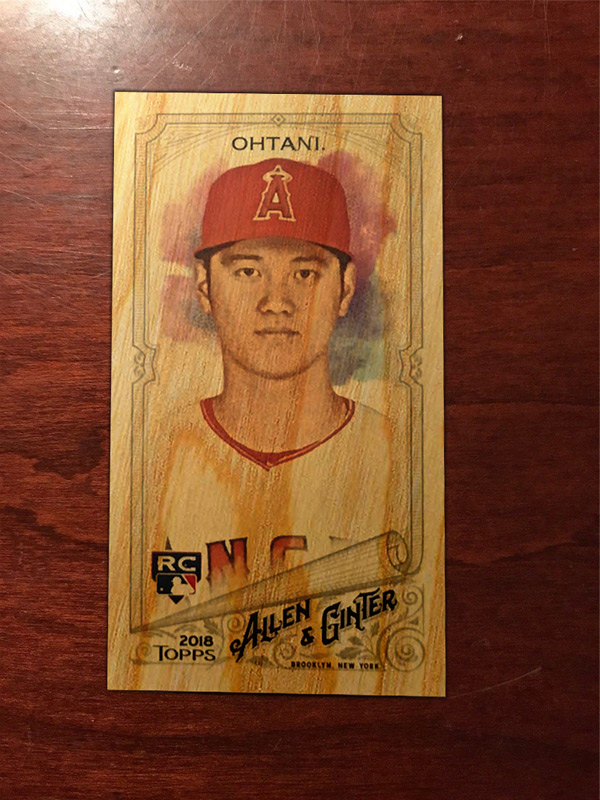 I’m not sure how much this would sell for now, but man alive … surely this would fetch a PRETTY penny a half year or so ago!

I’m not disappointed though, because something else magical happened.  Pack after pack yielded a wood mini.

After about 4 packs in I had pulled the cards above, and decided to run in wide-eyed and tell Holly.  The poor pregnant girl was sound asleep and scared the heck out of her.  She seemed more annoyed that I woke her up than excited that I had what we call in the biz a “hot box”.  I told her how this was one of the great unexplained mysteries in the hobby.  No one knew what happened to these, as they simply weren’t showing up in anyone’s packs like they should.

I read online about them, and apparently a Topps executive said that it is possible that collation might have been messed up and some lucky people may get some boxes that are LOADED.

I got Holly and Atticus into opening the rest of the box and every one of the 24 packs in the first box had a wood mini!  My hand was SHAKING as I reached to open the next box.  What if every box was like this?  I was excited for sure, but was obviously happy that I had already scored 24 wood minis – more than the world has probably ever seen for 2018 A&G.  Atticus opened the first pack, and sure enough: 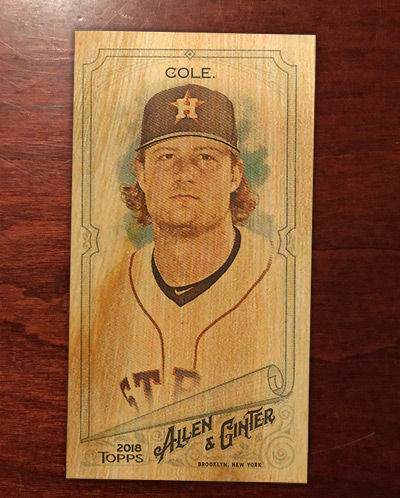 Not a super-duper superstar, but how can we be upset with this!?  After about an hour of opening, we had a total of 288 2018 Allen & Ginter Wood minis.  I am still shell-shocked!  Had I not listened to Jerry’s flat earth story, I wouldn’t have met Evie who sold me the case. 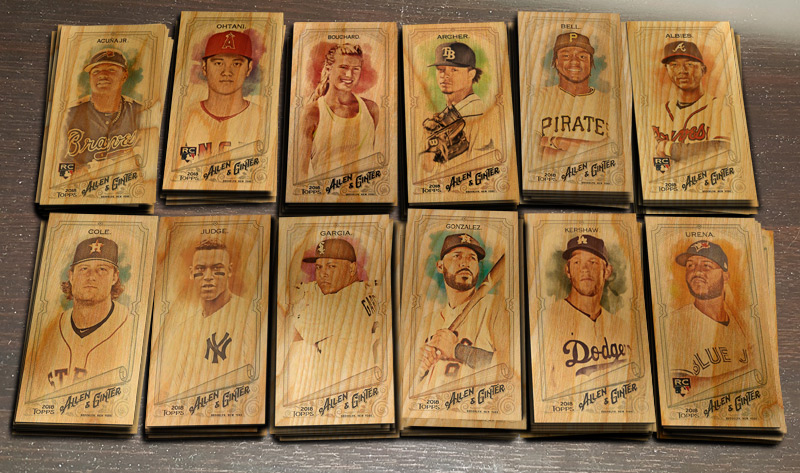 So, I’m kind of bewildered right now.  What do I do?  Sell them at auction?  Sell them off one at a time?  Do I give some / half of the profits to Evie?  I’d love to hear your thoughts.

But I also wonder what your thoughts would be if you heard that these weren’t wood at all.  What if they were just images of regular minis taken from Google? 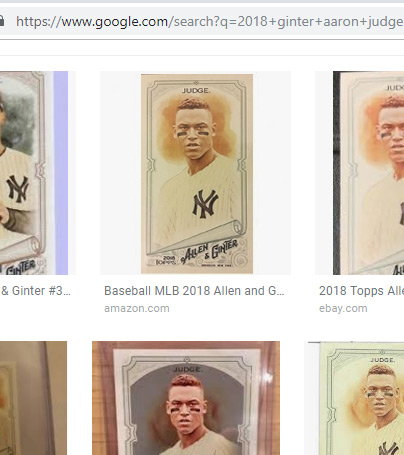 Placed on top of a picture of wood… 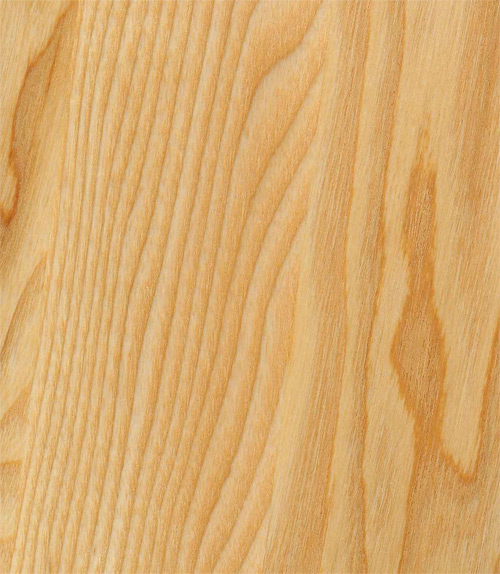 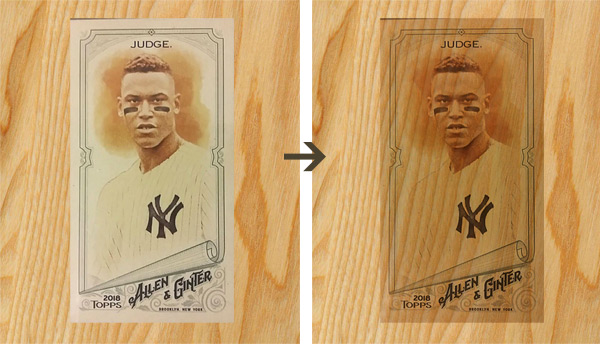 Repeated for several others … 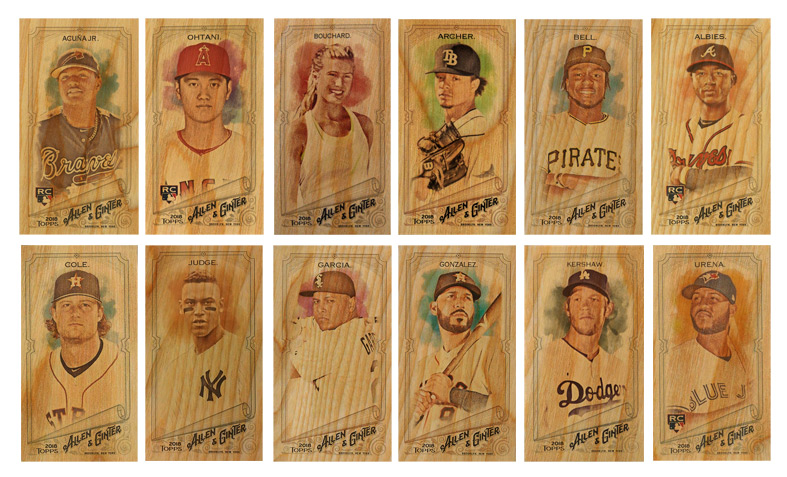 Tilted, shadowed and placed on a picture of my dusty table… 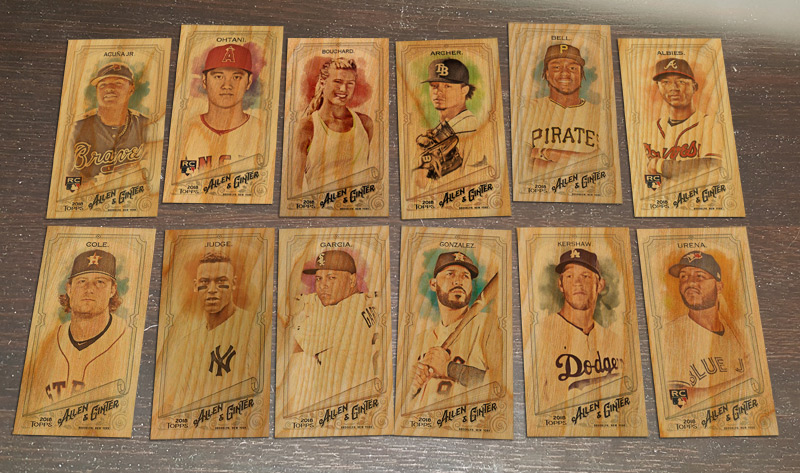 Shaded & brightened to match lighting variances of the table …. 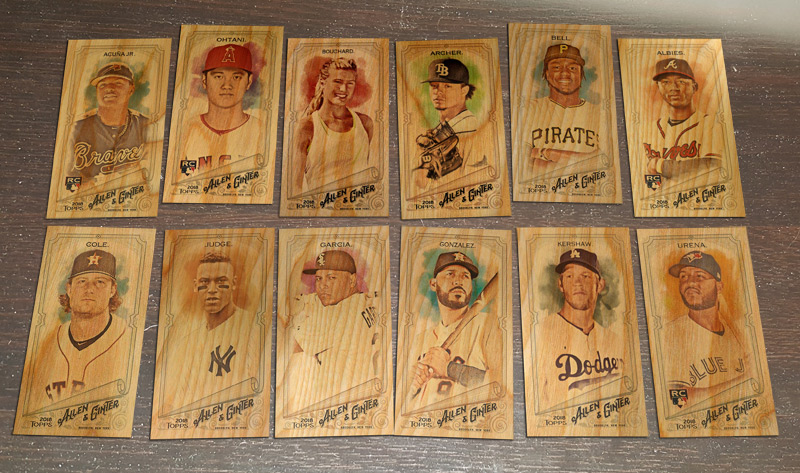 and graphically stacked to make it appear as though there are stacks of wood minis? 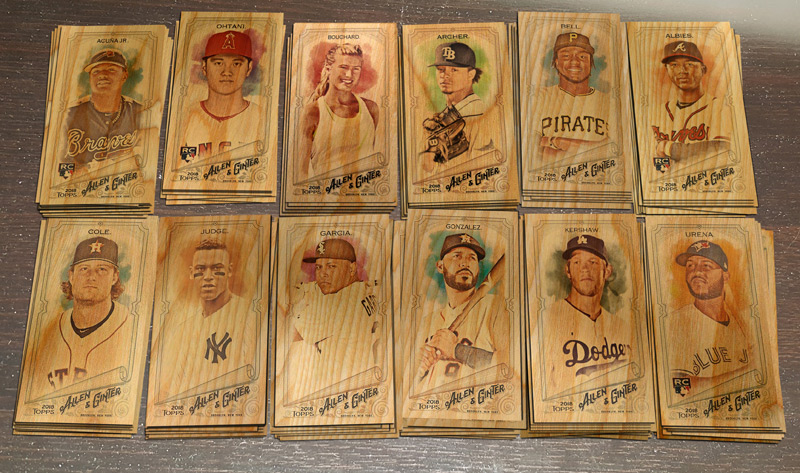 Nah, that can’t be it.  I mean, who in their right mind would spend all that time on a gag anyway? 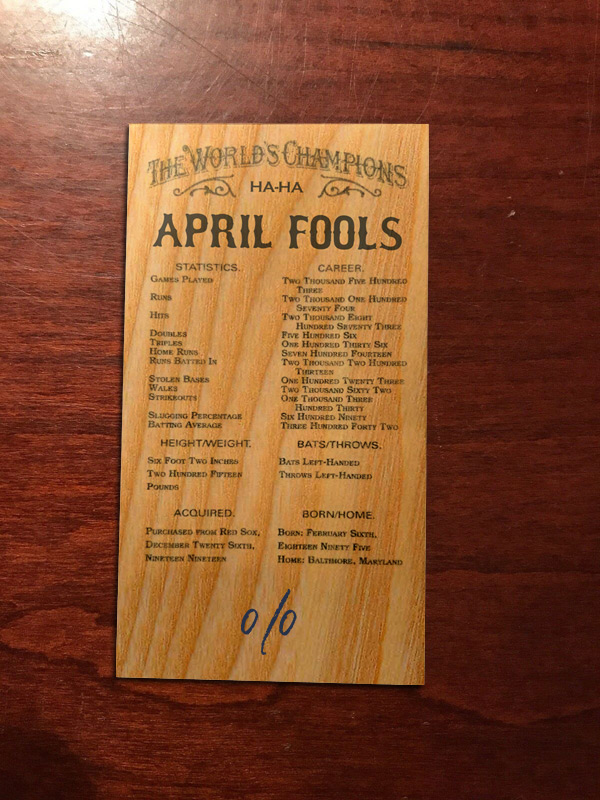 By the way – feel free to check out my wife’s book Confessions of a Baseball Card Addict’s Wife.  Available only on April 1st! 😉 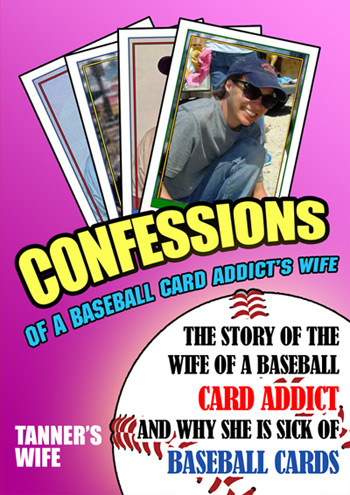 If you want to read any of my past gags, you can check out the following links!

FOUND MY 29 YEAR WHITE WHALE! And the Reason for my Username!

Has this newest card release gone too far? This is downright creepy & gross.

My April Fools Prank – What Was Yours?