My April Fools Prank – What Was Yours?

Not sports or sports card related, but I thought I’d share some post-mortem april fools goodness with you all.

Or how about the time when I was in 7th grade.  I went to bed dreading school the next day (I *HATED* school – 7th grade was the worst for me.)   My parents woke me up.  I didn’t feel well rested, but took a shower, got dressed and ate breakfast while dad had the coffee going and was getting read for work as well.

This year, I wanted to do something to my family.  I needed to make sure it was not traumatizing, nor terrifying.  Sadly, that was all I could think of doing!  Late at night when everyone was asleep, I decided to set the clocks ahead.  I heard a good idea would be to move them up an hour.  But hey, go big or go home, right?

I set all the clocks 3 hours ahead.

I sneaked into my son’s room, while bumping into his massive foot and fumbled around in the dark for his Yoda clock, then changed it from 1:43AM to 4:43AM.  I figured out how to change my phone and my wife’s phone, then did my computer, her computer, his computer and even the microwave clock.

The last item to take care of was to sneak into our room and change our clock.  That was going to be a HUGE undertaking, as my wife sleeps VERY lightly.  One of our dogs sleeps in our room, and decided to have a scratch & chew fest while I was attempting to do this.  I finally made it over to the clock, while still hearing her saw logs.  I quickly flashed my phone so I could have light to see what to do.  As I clicked the time hour three times, I’ve gotta tell you – it was the LOUDEST three clicks ever.  I cannot believe she was still asleep!

I went to bed, and woke up while instantly remembering my efforts.  I noticed my wife was just getting up, so I lifted up my head and peered over at the clock.  11:13.  “Oh, wow!” She was shocked we had slept in so late.  Perhaps what was even more shocking was the fact that the light of the sunrise was still creeping into our window near lunch time.

I got up and made breakfast, then my son came down at 9 … errr … 12.  He still looked tired, and as he lay on the couch, I remembered something.  His ipod and my wife’s tablet!!!!!!  The whole gig could be up before it all started.  He was seconds away from grabbing his ipod, when I frantically thought of something for him to do.

“Hey son, why don’t you get ready for the day – we might be doing something later.”

“But mom said we don’t have anything today.”

He stumbled into the bathroom and as the door closed, I quickly googled how to change the time on the ipod, then changed the time on the tablet just in the nick of time.  PHEW … saved.

As the day progressed, I got more and more of a kick out of it.  They were wondering why they were so hungry when 3pm came around.  My wife busied herself with making all kinds of cookies and other things for the bake sale at our missions banquet that would happen on Sunday.  She sent me out at about 5pm (2pm) to get some ingredients.

When I got home, she was halfway into making dinner at about 2:30.  Ruh roh.  I guess I’m fully committed now.  Hope she isn’t too angry about this one!  Oh well .. .either way … WORTH IT!

My son’s friend’s mom asked if he could come over at 6:30, and we said yes.  At this point, we were about to sit down for dinner, realizing that we had to hurry to get our son to his friend’s house who was probably about a half hour away.  As we sat down for dinner at 6pm (3pm), it was time to pray.

“Heavenly Father, we thank you for this lunch we are about to …”

“We thank you for this LUNCH we are about…”

“Lord, thank you for this lunch we are about to eat.  In Jesus’ name, amen.”

Confused, they both asked me why I kept saying lunch.  I started dying laughing, and told them it wasn’t 6pm, but rather 3pm.

“WHAT?!?!?!”  My wife smacks me on the arm accusing me of lying, while my son frantically runs around the house looking at all the clocks.  We all had a good time of it, but I have to say – it actually felt like three hours were added to the day.

Am I glad I did it?  You bet!  It was hilarious, and didn’t traumatize or terrify anyone.  The only thing I worry about now is retaliation. 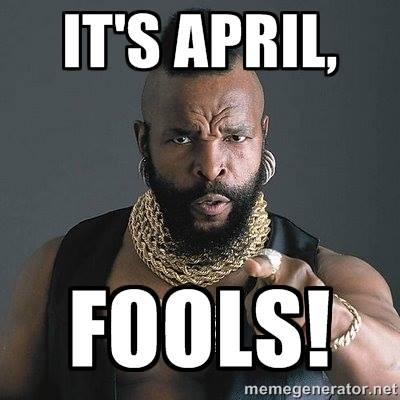 What April Fools joke did you partake in?