This page has been modified to fit the junk wax era – we didn’t quite make it to 10, but nevertheless, here they are!

When you think of the junk wax era, you may think of the baseball card boom that started in the mid 80’s and ended in the early 90’s.  Many believe that this time period is worthless when it comes to collecting, but believe it or not, some of the most valuable, rarest baseball cards have come out of this time period.  The cards shown below are the very definition of excitement for collectors.  They combine extreme rarity and incredible stories, with enough nostalgia for most collectors to get anyone’s heart pumping.  Most of these also have multiple copies, but it is likely that fewer than 10 of each exist, making it an all out war whenever they pop up online for sale.  They are true holy grail cards in the midst of a time when collectors saw unprecedented print numbers.

It is important to note that there is an extremely large difference between a card that was printed over the past few years with a serial number to 1, 5 or 10 (i.e. manufactured scarcity) vs. the cards shown below that are rare, only because they were never meant to make it to the market in the first place.

Here are what I would consider to be the top Jose Canseco baseball cards from the Junk Wax Era – cards so rare, that most may have never even heard of them before, and might be shocked to hear how much they are worth: 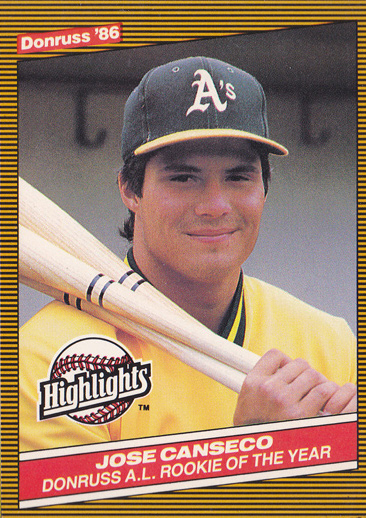 When you think of a Jose Canseco rookie, you may think of his Rated Rookie or Topps Traded.  His rarest of all rookies is actually the 1986 Donruss Highlights – White Letter Variation.  It rarely shows up for auction, ever.  The regular version of this card has the word “Highlights” in yellow.  A true hard to find variation, and is his absolute rarest of rare rookie cards ever.  It is unknown (to me, anyway!) how these came into the market.  Countless people have opened cases and cases of sealed sets, never to find any.  At the time of this writing, only 1 has ever been graded by PSA!  The estimated value of this card is $500, though, this could certainly be on the low end, as more collectors come into the hobby. 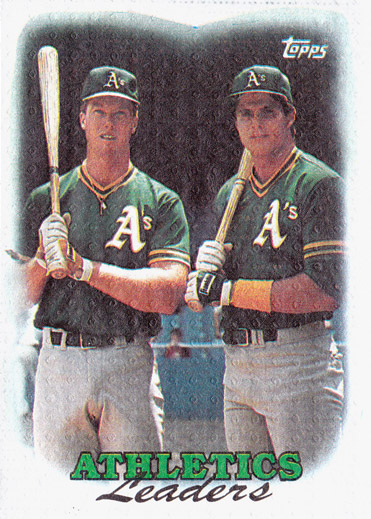 The first Topps card to feature the Bash Brothers.  It doesn’t get much better than this.  Well, yes it does.  Topps decided to do a test run on a sheet of 1988 Topps cards on cloth.  The sheets have words printed directly on the mentioning they are not for sale.  Topps decided to not run with this idea, and it is estimated that fewer than 50 of this nearly 30 year old issue exist.  Who knows how many are still out there today?  This is a TRUE holy grail card for collectors.  The estimated value of this starts at $600-$750, though can sell for more. 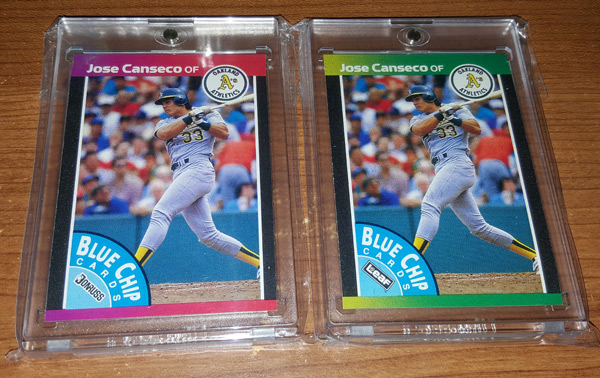 If these look familiar to you, look again.  In 1989, Donruss came out with a subset called “Grand Slammers”, with a triangle graphic in the bottom left.  The Blue Chips have a completely different graphic, and were never released in packs.  They produced as a test in SUPER limited quantities.  According for a former Donruss employee, they were apparently created to compete in the high end market, but ultimately was scrapped in favor of making Leaf its own baseball card brand in 1990.  Blue Chips can fetch upwards of $1,000 each. 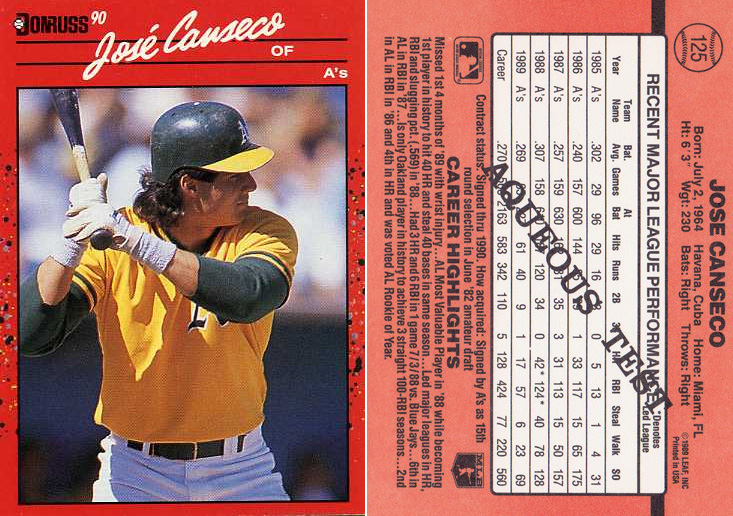 In 1990, Donruss experimented with a water based high gloss coating (aqueous test) for their cards, and printed “AQUEOUS TEST” on the back.  It is estimated that 10 or fewer of each exist.  With the PSA POP report showing more than this for some players, it is possible the figure is greater, though it is also possible that it is due to cracking and re-submitting in an effort for a higher grade.  Regardless, the Jose Canseco card is currently in a tie with a few other cards in the set for lowest POP in PSA, showing only two ever having been submitted.

We all love chrome cards, but what if I told you that Signs & Glassworks / SGW / Chromium Graphics first brought the chromium technology to another company before Topps?  A company named Upper Deck.  Yes, folks, we may have been close to having Upper Deck Chrome cards.  This story is very intriguing in and of itself, primarily because samples were made.  These samples were allegedly pitched to Upper Deck, turned down and then brought to Topps.  There are three known copies of this 1991 Upper Deck Chrome Silver Sluggers card to exist, locked away in collections and may never see the light of day in the foreseeable future, anyway.  It would not be unreasonable for this card to fetch $500-$1,000 given  if it were to ever hit the market, though the price is an unknown at this point.

I debated whether or not to add these into the list, because it is quite possible that these may be the only ones like them, but here they are.  It is rare to have prototypes from an establish company that never got the licensing they were after.  Ace Novelty appears to have been trying to put together a large set to compete with the big guns (Topps, Fleer, Score, Donruss, Upper Deck, Leaf, etc.) and printed various sheets, with even a few finished cards.  At the 11th hour, they didn’t get the licensing and were ordered to have the printed sheets of cards buried in a landfill – supervised.  Prior to this, the person who had the actual finished prototype cards was actually a little league coach.  He handed the cards out to the kids on his team, assuming they were going to get licensing.  As a result, the cards ended up being worth hundreds of dollars in some instances as opposed to pennies.