Two Years in the Making

It must have been five years ago when I was in my office with my son opening some SP Authentic.  He pulled a beauty of a card. 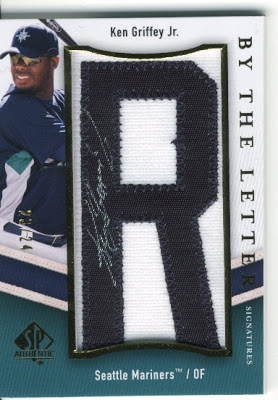 While it wasn’t (most likely) this exact card, this is how I remember it.  I thought it was absolutely amazing.  Brilliant even!  They took a game used jersey worn by Griffey to cut up and have him sign a letter … then put it on a card!

Then I found out they just manufactured the letter to be signed.  I thought something was up when they started making sets of these cards that spelled things like “Junior” – I mean – at least I don’t *think* they ever had the back of his jerseys say Junior 🙂

While it was a bit of a letdown that it wasn’t game used, I still loved the card, and thought it was an amazing idea.

Then, Topps came out with gamed used letter patches!  I love these as well, and was able to snag a few Cansecos. 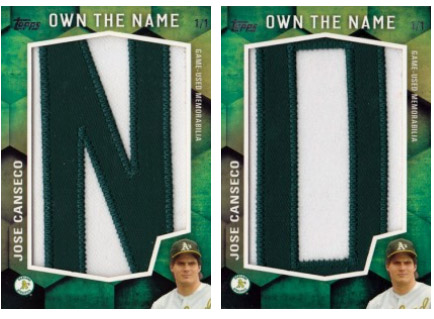 Yes!  I’m totally serious.  I love them.  I just wished Topps would have had the players sign the letter patches.  That would have been #perfection.

Whenever I had the crazy idea to reach out to Canseco’s manager for a private signing, my thoughts were not just on the crazy patch, logoman, laundry tag and button cards.  The letter cards were a huge drive for me to get this done.  I remember thinking/hoping/dreaming of the day for the private signing to come while watching baseball games.  All I could see were baseball players running around in all of this glorious patch material for custom cards.

The conversation between myself and his manager started over two years ago now.  Once I got the green light, I started buying up authentic jerseys of each team he played for including the Angels and Expos, of whom he never actually played a game with, but is featured on multiple baseball cards as a member of. 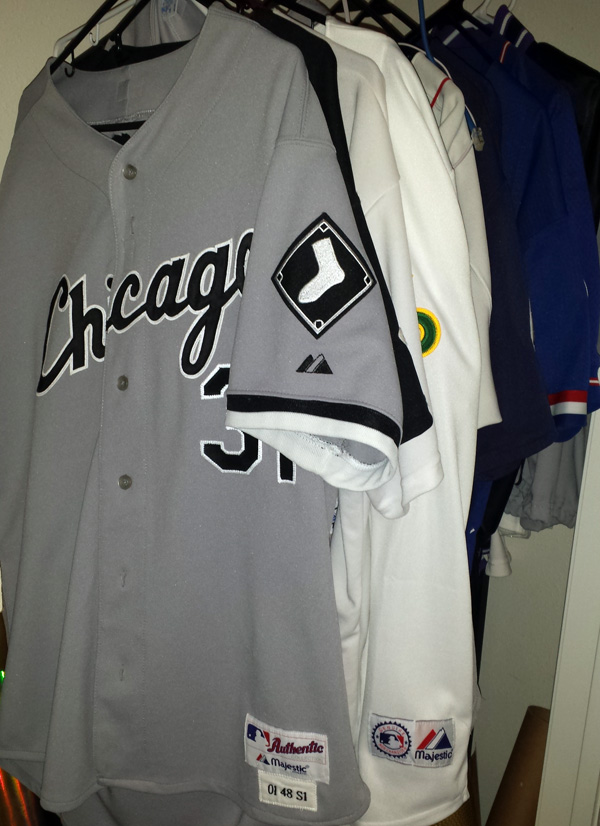 Some were much, MUCH harder to get a hold of than others, but ultimately, I got ‘er done.  Sometimes it didn’t seem like the signing was going to happen, so I wondered from time to time if I really should have picked up so many jerseys. (I have multiples of some teams, though he only signed on letter set of each team.)

The plan was to have him wear them, and sign each letter.  I kept thinking how cool it would be to make a set!

As you probably know now (thanks to me not shutting up about it!) it happened.

He wore them all … 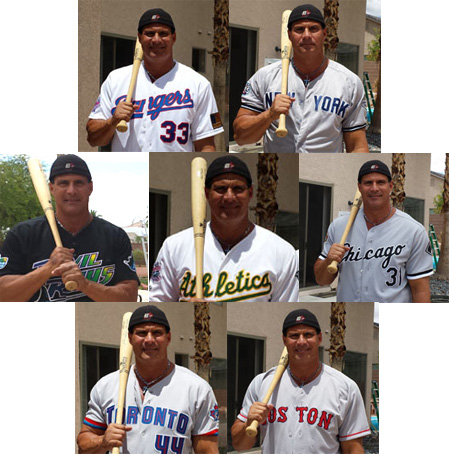 He signed them all … 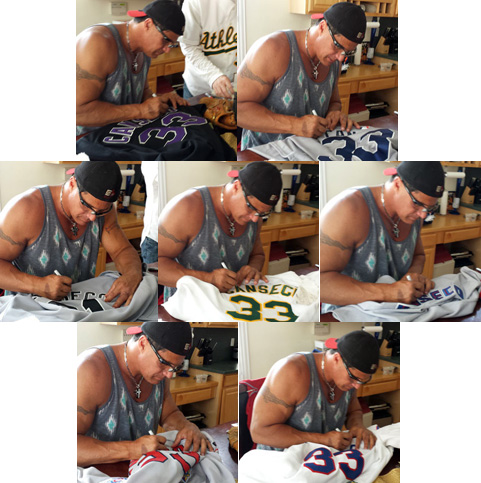 and I was one happy puppy! 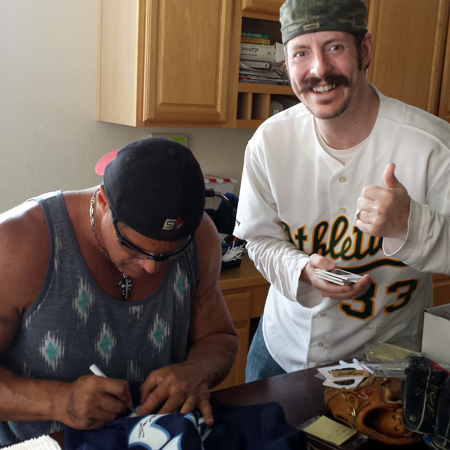 I remember the long, loooooong drive home.  I felt like I was transporting the Hope Diamond…only much more valuable to me.  Okay, maybe not.  But I did worry about autographs getting smudged, someone robbing us of my huge bin of autographed custom material, etc.  Jose told me the signatures shouldn’t smudge, but I still was a bit worried.

Through two torrential downpours, a possessed GPS trying to run us off the road in the middle of nowhere and various other crazy things, we made it home and I was able to safely put the newly signed jerseys in my office closet!

I remember cutting through the first one for a regular patch … I think it was this one: 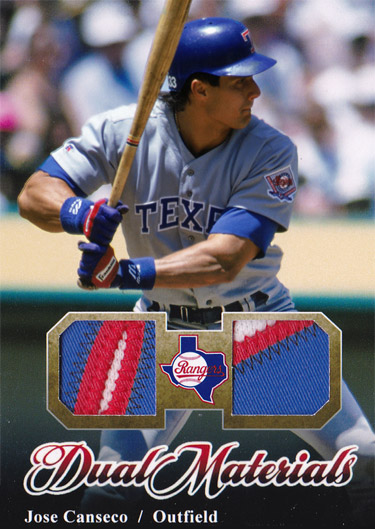 Though this was the very reason I bought the jerseys, it still was a bad feeling cutting into a jersey that was worn and signed by my childhood hero.  99% of the collecting population would LOVE a signed/worn jersey of their favorite player, and here I am hacking them up!

Up until a week ago, I had not touched the vast majority of the jerseys.  I tried to limit myself to taking scissors to the jerseys I had some duplicates of.  Still, my dream project was hanging in my closet.  Waiting on me to overcome my fears of REALLY cutting into the jerseys, the confidence to go forward and the inspiration to make it happen.

So many questions have plagued me over this past year.

What if my design work looks like junk?
What if I cut a letter wrong, thus making it unusable?  (If you cut too close to the letter, it will not work, and might as well be scrapped for just a “regular” patch card.)
What if the letters are simply too big?
I never instructed Jose on how/where to sign on each letter, because I didn’t know it would matter.  Would it matter?
How on earth would I cut these?

Don’t get me wrong … I DID *try* to put together some design work for it one time several months ago, for like five minutes … yeah, COMPLETE AND UTTER SMH! 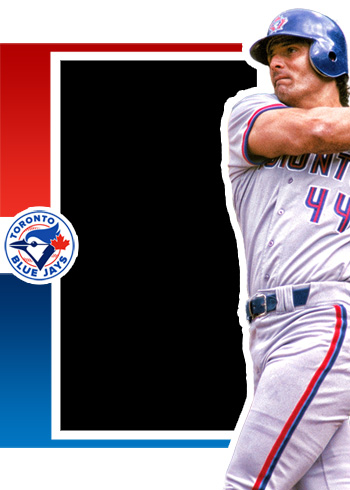 I then became busy with other things and didn’t give it another thought.  It wasn’t until I was working on a Stephen Curry custom for a friend that I finally had inspiration.  So, I got to work!  It took more than a week to get everything done, and maybe more. 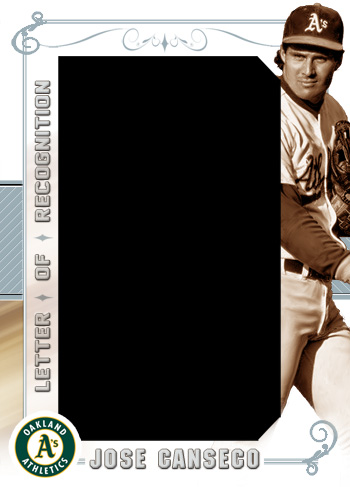 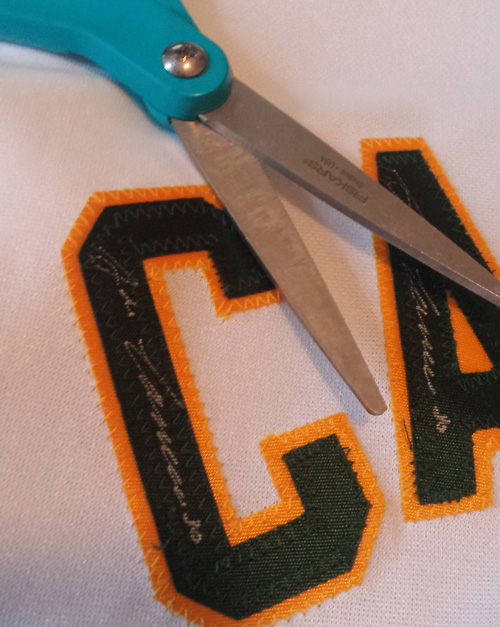 It was hard to cut out the first letter, so after thinking about it, I had an idea to glue it to cardboard backing and cut it that way. 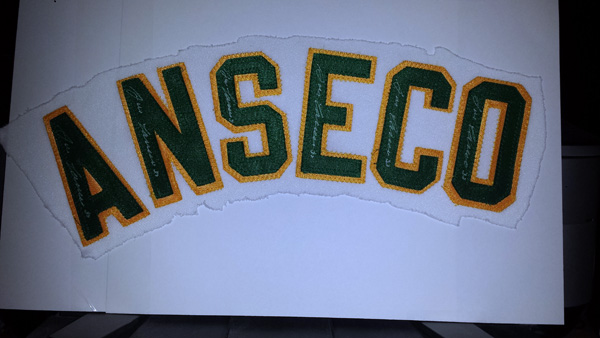 I figured it would probably be best to rip it off like a band-aid and just cut out ALL of the jersey letters, so that is just what I did. 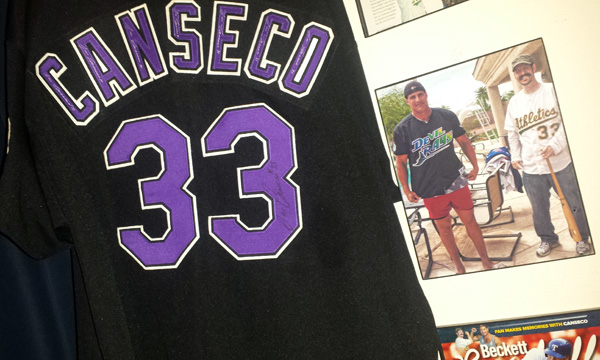 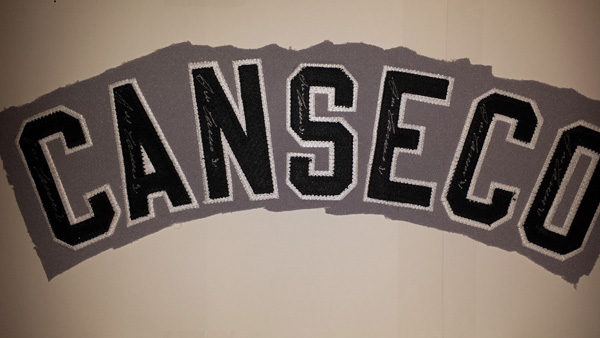 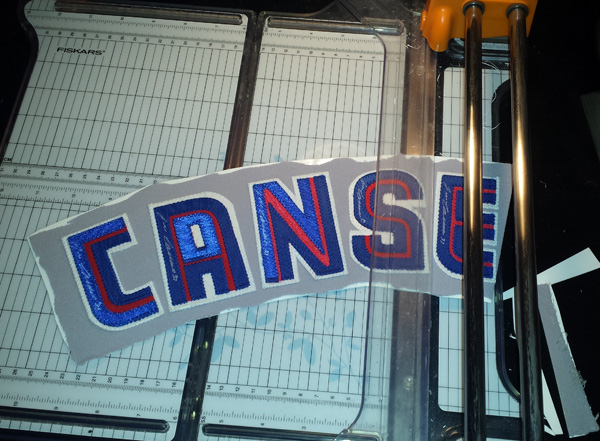 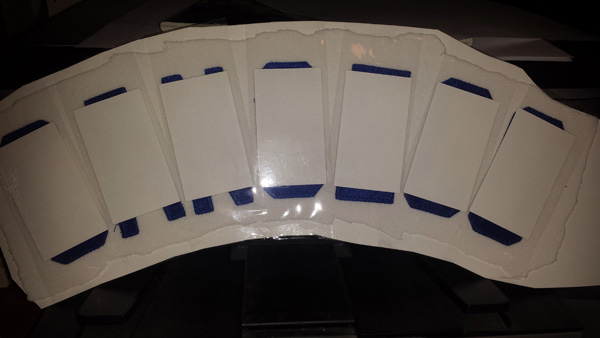 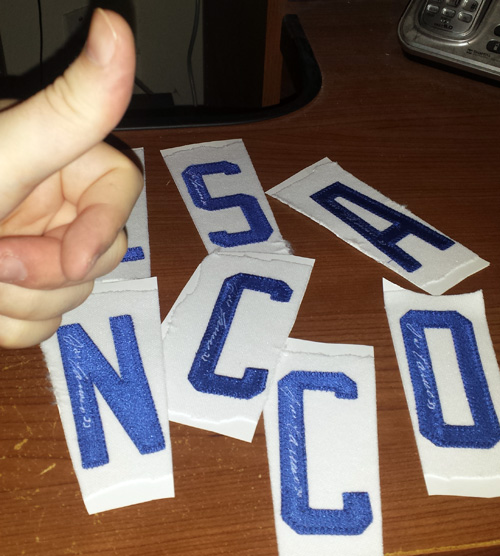 Phew!  It worked.  Everything seems to have been cut well.  One team Canseco was on was the Yankees – they don’t have a nameplate on their jerseys.  This could have been a problem, so I figured it would be best to just have it created and sewn onto the jersey.

I think it turned out nicely!

Ready to see the the A’s nameplate set?  Okay, but first I need to eat

Here is a mock up of the A’s nameplate set.  I only made one of the cards, and put the face plates over the other letters to see how it would look.  Here they are all laid out as a bit of a mock up before actually creating any of the cards:

Finished, I think it would look amazing, but I actually decided to go another route.  Many moons ago, the great Canseco supercollector Razor (AJ) mentioned how there are 7 teams he played for, and 7 letters in his name.

So, instead of doing a nameplate with just the A’s, I made a nameplate set featuring a letter from each team!

I really wanted this to be an extra special set, so I made the back of each and every one show 2 pictures of Jose wearing and signing the exact jersey that the letter on the front of the card came from, in addition to the date it happened and a short write up.

Here are pics of the front & back of each card…

A’s – Canseco gets the Incredible Hulk treatment instead of sepia. 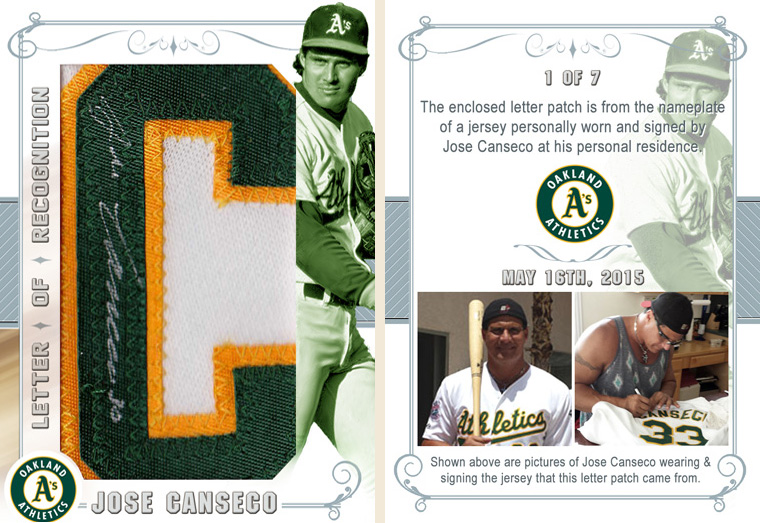 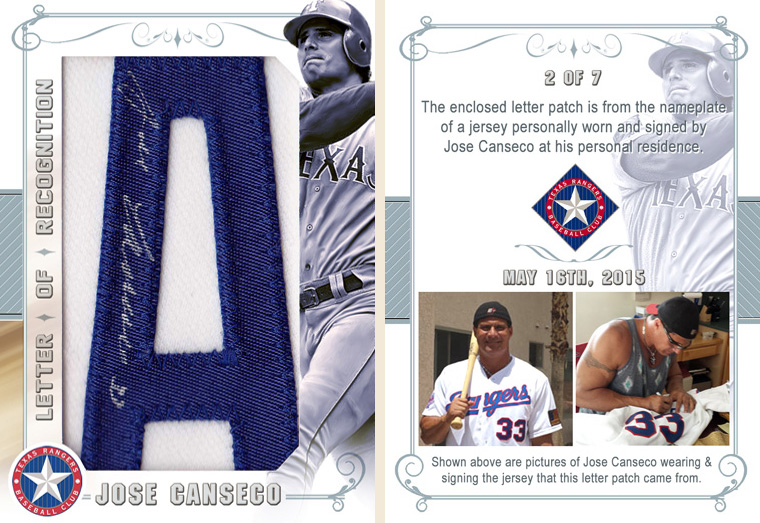 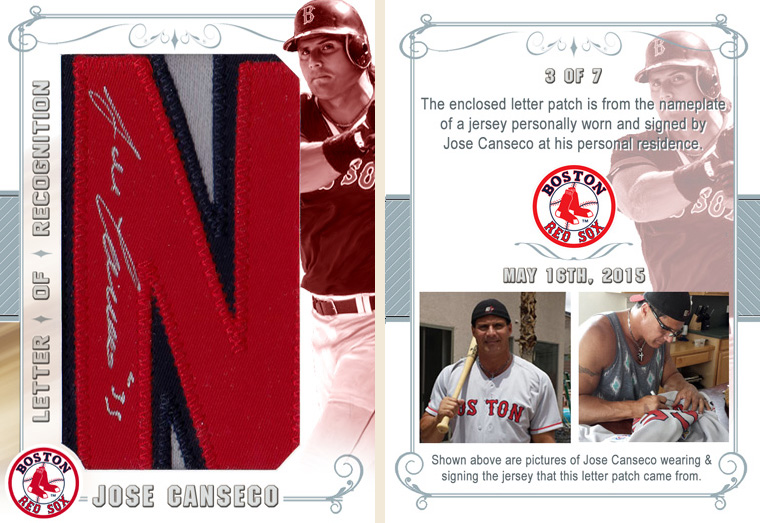 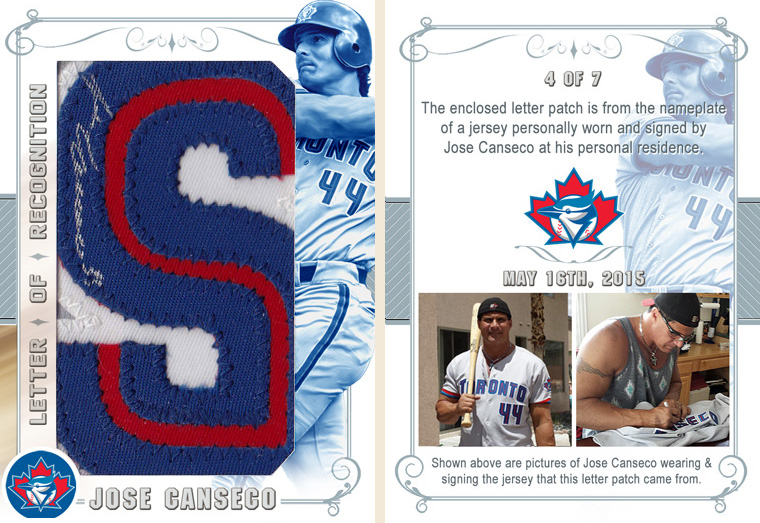 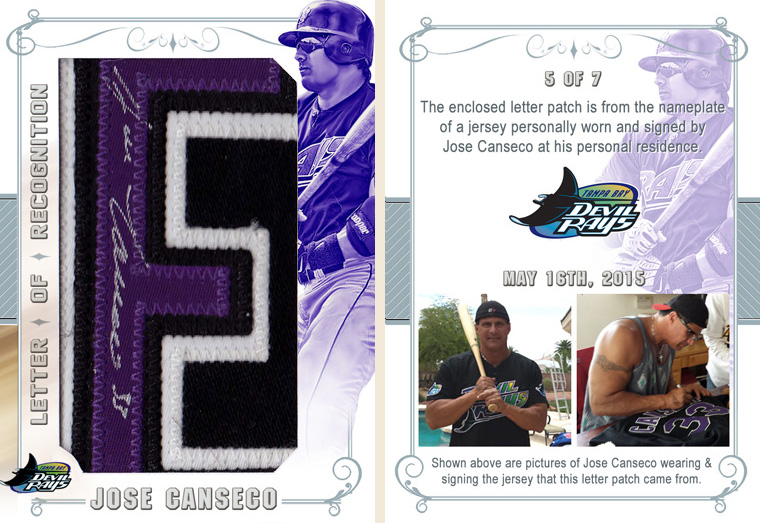 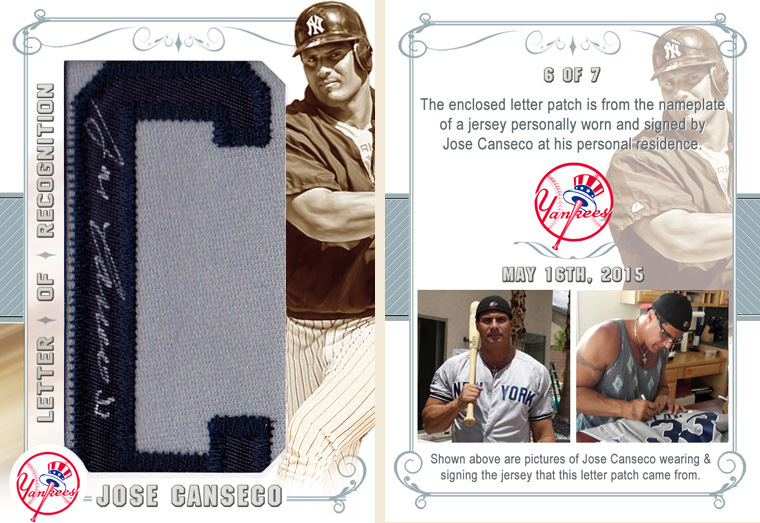 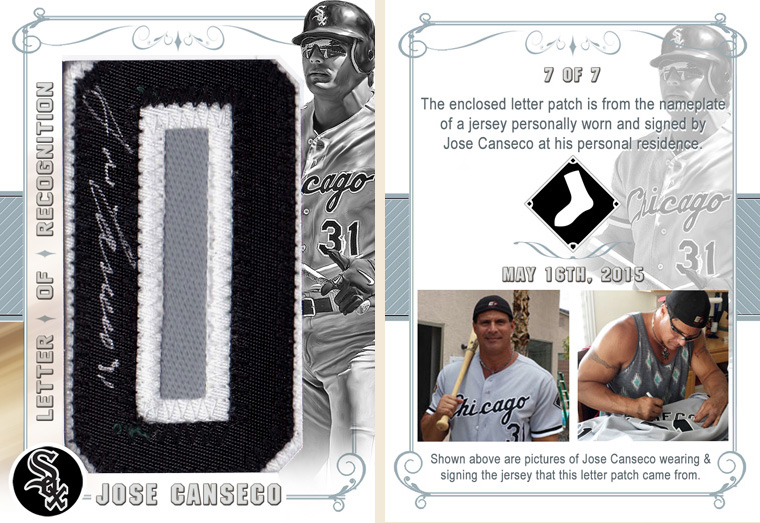 And now, all together:

Sadly, the only “real” patch cards Canseco has are all with the A’s and a very, very few with the Devil Rays.  No Rangers, Red Sox, Blue Jays, Yankees or White Sox patch cards to my recollection.  #getonittopps #getonitpanini #getonitleaf

How fitting that I was able to finish this on Canseco’s birthday.  (Happy 52nd birthday, Jose!)

I am very happy that it is finally finished & represents Canseco’s entire career in one meaningful set.  It might just be the project I am most proud of, to date!  I’m also happy that I have a lot more material to work with in the future! 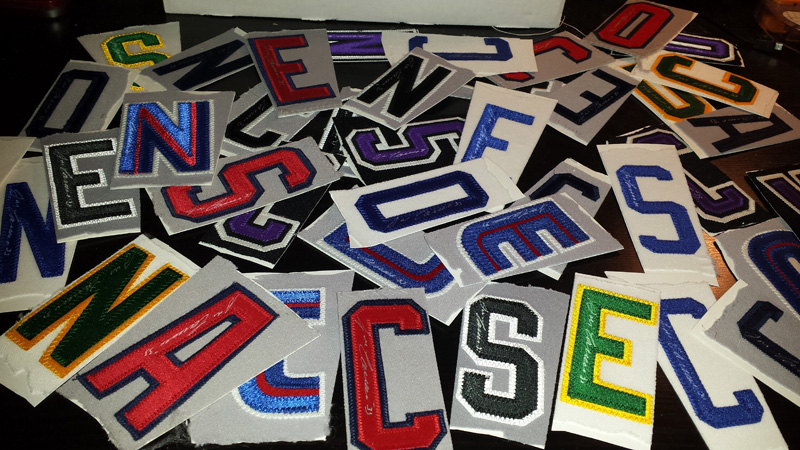