Ladies and Gentlemen,
It has been a long time in the making, and is really hard for me not to build this up too much, only to have you be seriously let down in the end.  Just understand that at the end of this, you will think to yourself “pfffbt…that was all?”  (This is me trying to bring your expectations back down.)

Okay, I’ll stop going around in circles and get to it.  This might just be one of the most important pieces I have made ever.  Technically speaking, there isn’t necessarily a WOW factor.  It doesn’t have a player’s tooth embedded in it, nor will it make you breakfast or sing to you.

The thing that makes this special, is that this card simply should not exist.

I know, you are thinking to yourself … none of the cards I make should exist, but this one is different. 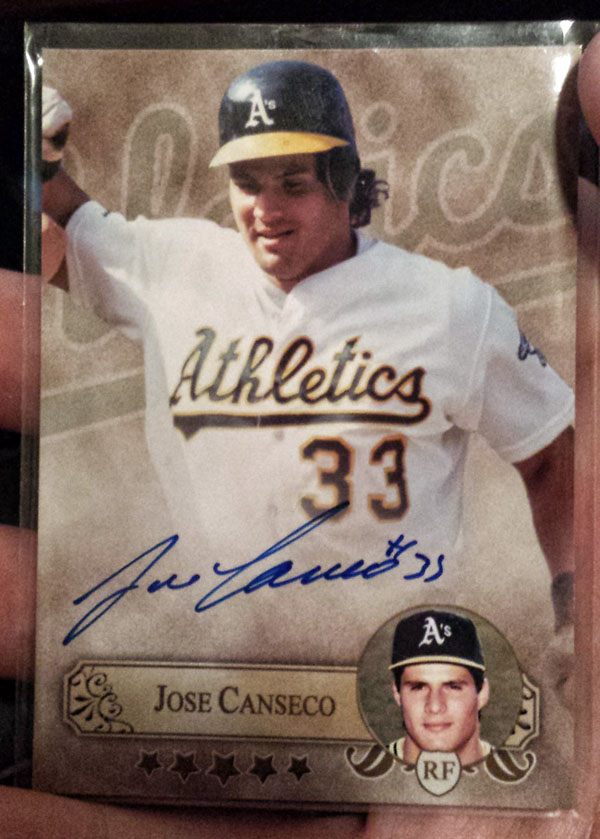 What is so special about this?

If you have been a reader of my blog for a while, you know that this is actually a newer rendition of the first booklet I ever put together using a 25 cent A’s hat from a garage sale, pizza cutter, exacto knife and elmer’s glue stick.  You do remember, don’t you?  Here is a refresher if you didn’t click the link: 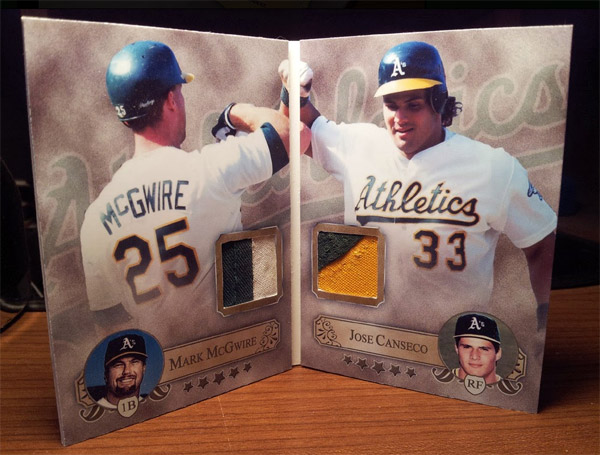 This was before I had access to anything I use now, as well as any game used material.  I was so proud of it.  I started thinking how cool would it be to have this as a higher quality booklet … but instead of game used pieces, have their autographs.

He will flat out not sign ANYTHING with Jose on it.  But don’t take it from me … 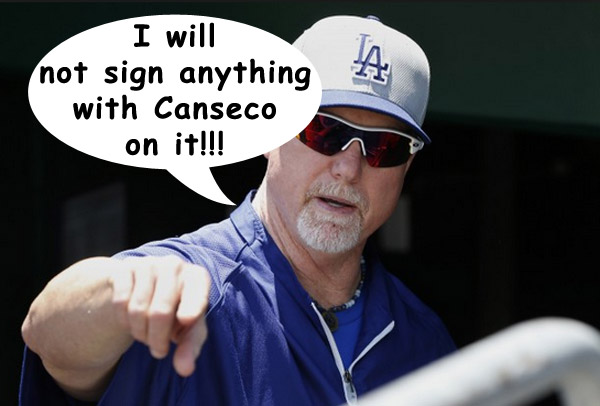 See folks?  I wasn’t kidding!  He sounds serious, too.  I mean, look at the look on his face and the gratuitous usage of exclamation marks in his word bubble!

This is the face of a man who will not be signing anything anytime soon next to Canseco.

Panini came close to fulfilling the dreams of bash brother fans by producing this card: 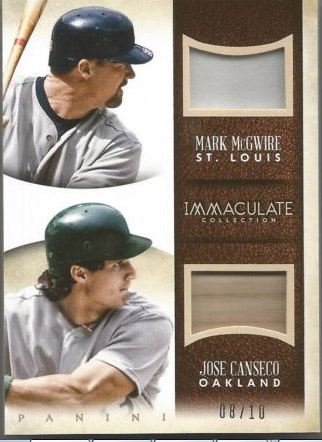 But I think they missed the mark … as in Mark McGwire … being in a FREAKING CARDINALS UNIFORM!  C’mon!!!!  Bash brothers … both need to be wearing the green and gold.  If this is the closest we are going to get, I knew I had to take action.

You may remember a few months ago I showed off my McGwire refractor that was autographed thanks to a connection Bluejet66 had. 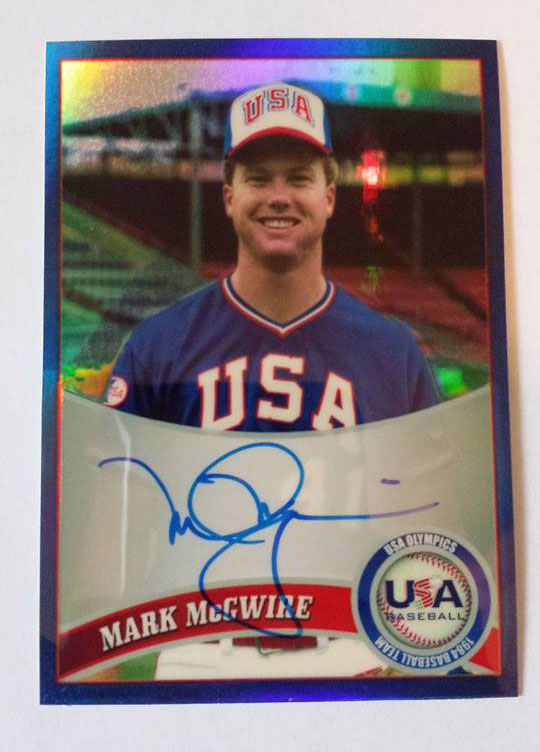 While I was mega pumped with how this turned out, I confess I didn’t tell you the whole story.

You see, while I did have him sign the above card I also had him sign another.  A card that he almost did NOT sign, likely due to suspicion of some sort.

After Big Mac’s hesitation, he went ahead and signed! 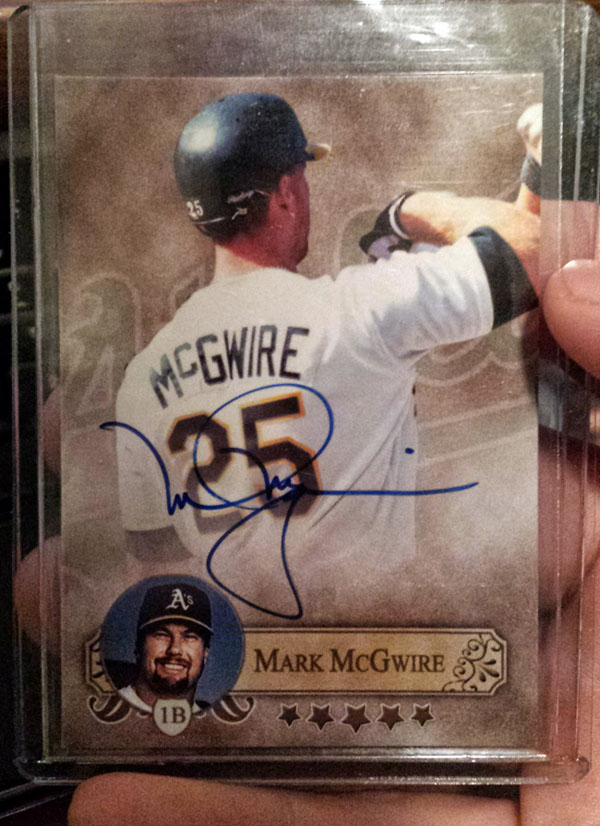 One can only speculate why he hesitated to sign this, and what was going through his head as to why someone wanted him to sign a baseball card that was of his back.

With as excited as I was about the USA refractor getting autographed, I was MUCH more excited for this, because all I had to do was to get Jose to sign the other piece.  Since I had all the pieces ready, I carefully (without too much sweat) assembled the only on-card dual auto booklet of the bash brothers known to man-kind … or at least known to me-kind.

Here is what working on it until 3:00 AM last night got me.

I present to you:  The Book of Bash – 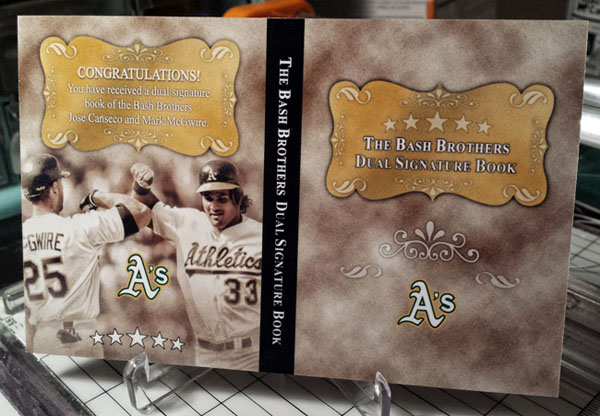 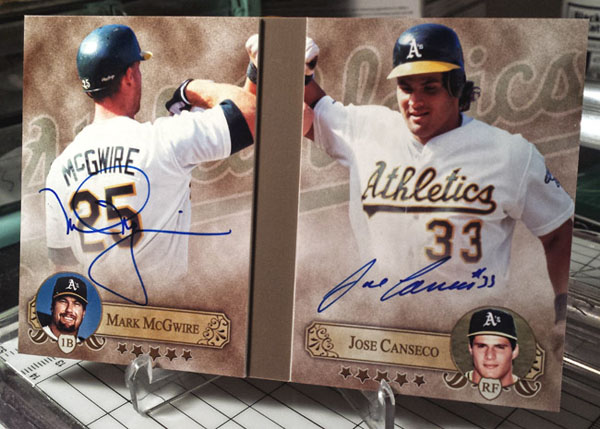 I still cannot believe it is done!  Over the past several months, it looked like Mark wasn’t going to sign.   Then it looked like Jose might not sign.  Here we are though!  I have it proudly displayed on my desk in a one-touch booklet holder.

This is just another reason why I love creating custom cards so much – a card like this may never exist … ever, and yet here it is shining on my desk in all of its on-card auto, bash brotherly goodness.