Could you imagine discovering the Old Judge original glass plate negatives from the Vermont Find in the mid 90s?  I’ll write more on that in a future article, but for now, I thought I’d share a pickup (and custom project) having to do with this find.

In this find were photographs developed directly from the glass plate negatives from over 100 years ago.  I was able to obtain a photograph of Abner Boyce.

Abner Boyce was featured four times in the Old Judge set, and is on the Old Judge “scarce” list.  His cards never surface, and it is a pity – look at that background, and moustache!  I was fortunate to have picked up Boyce’s card below, which is the exact specimen used in what is known to many as the bible of Old Judge cards – “The Photographic Baseball Cards of Goodwin & Company”.  One of the authors, Jay Miller, was kind enough to sell it to me. 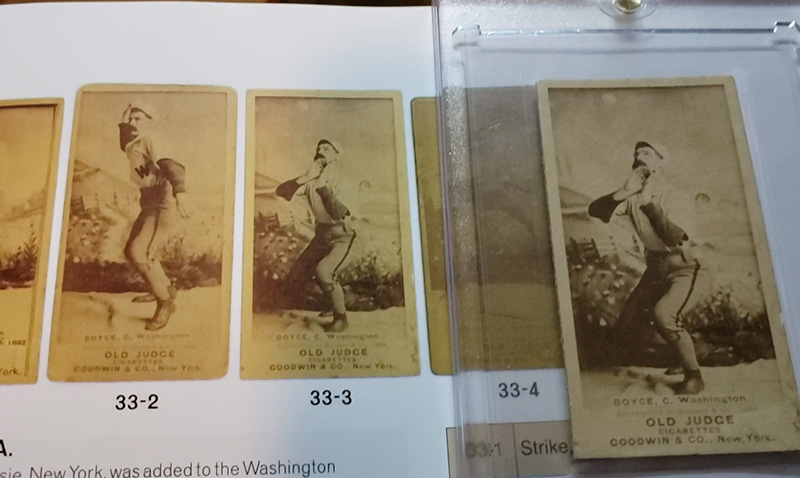 At first glance, it looks like Boyce is in a meadow fielding a fly ball with his bare hands.  If you look closely, you can see flowers, a wood fence, path, and a river in the background.  It is truly a beautiful card!  While Old Judge aficionados know that Boyce isn’t truly outside, but rather in a studio with a backdrop, the photograph that was developed directly from the original glass plate negative over a century ago shows the truth. 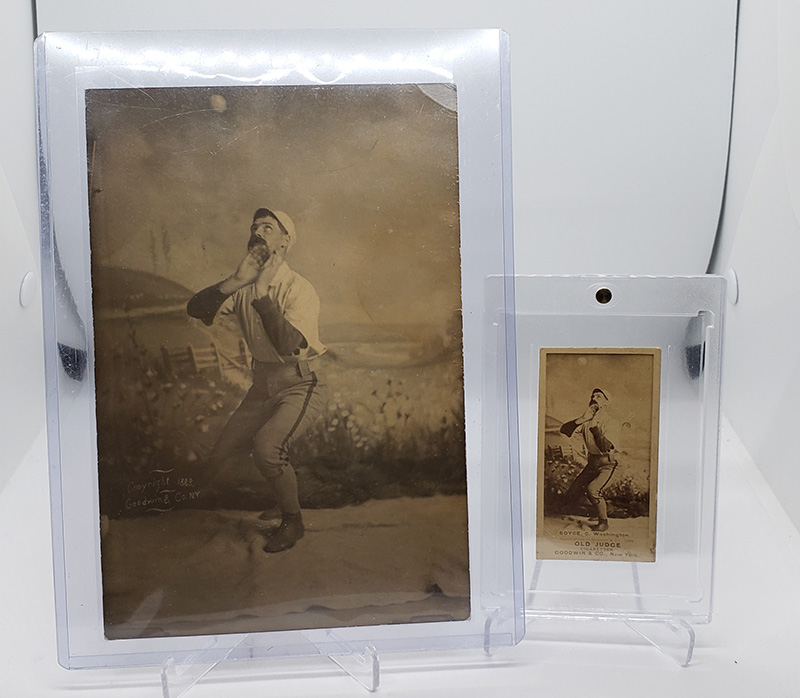 If you look at the bottom of the photograph, you can see a rug or blanket covering a studio ground.  The photograph in and of itself not only tells a more complete story, but is also much larger and clearer than the Old Judge card.

I *love* cabinet cards, and Old Judge N173s.  I think that is why this photograph appealed to me so much initially outside of its amazing story of origin – it looks like a cabinet card without the cardboard backing.  If you haven’t seen one, check them out – they are really cool.  19th century photographs would typically be glued onto cardboard backing with rounded corners that extend a bit beyond the borders of the photograph, most prominently at the bottom, so the studio name could be shown.

While I love the photograph as-is, I wanted to create something even cooler.  Maybe even something that could double as a holder.  I got to work on something that allowed me to test my debossing and gold foiling skills.  Let me tell you – it took TONS of trial and error.

Instead of a photography studio name, I wanted to put “The Vermont Find” to commemorate what monumental find this photograph was from.  All is done in gold foil on black cardstock. 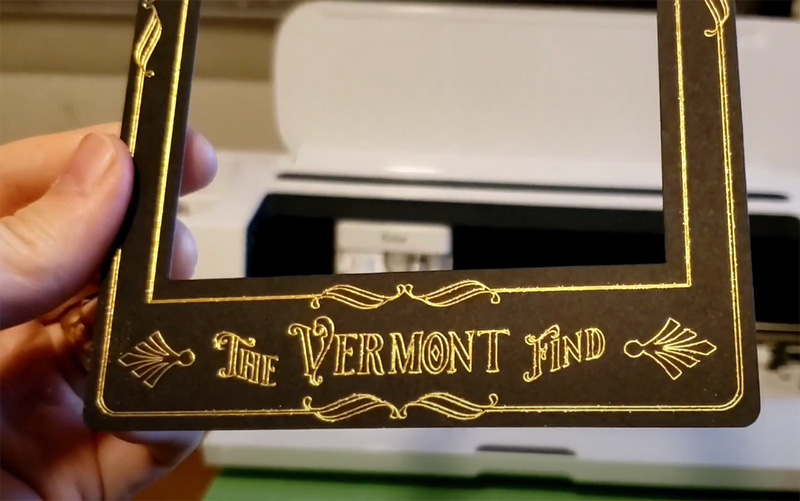 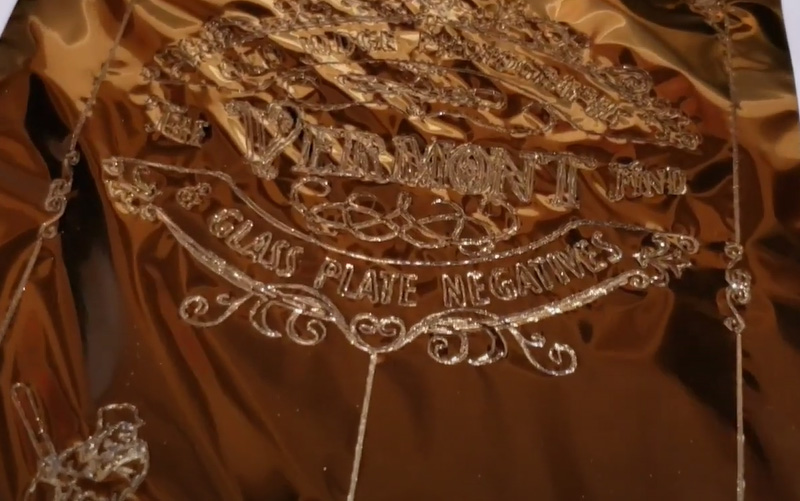 Peeling the top layer off … 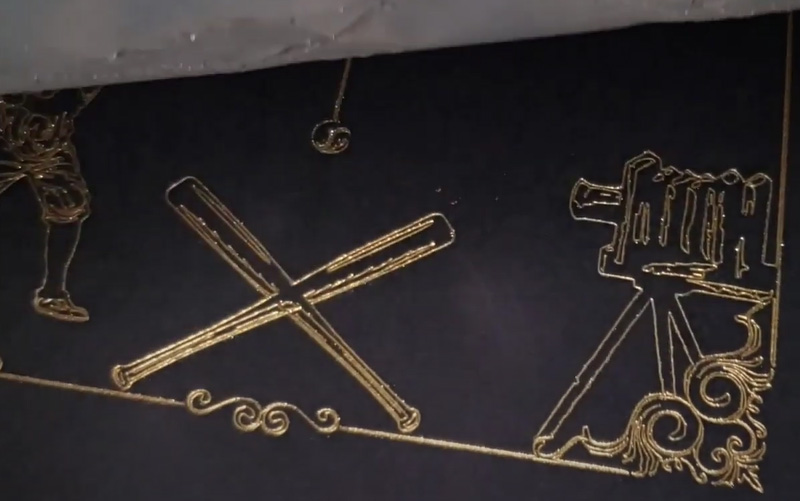 Voila!  I created the artwork on the back of this to show a baseball suspended on a string with a baseball player posing as if he were about to hit the ball, with a camera on the right, taking a picture of the action.  Old Judge cards are famous for this, so I figured why not have some fun with it? 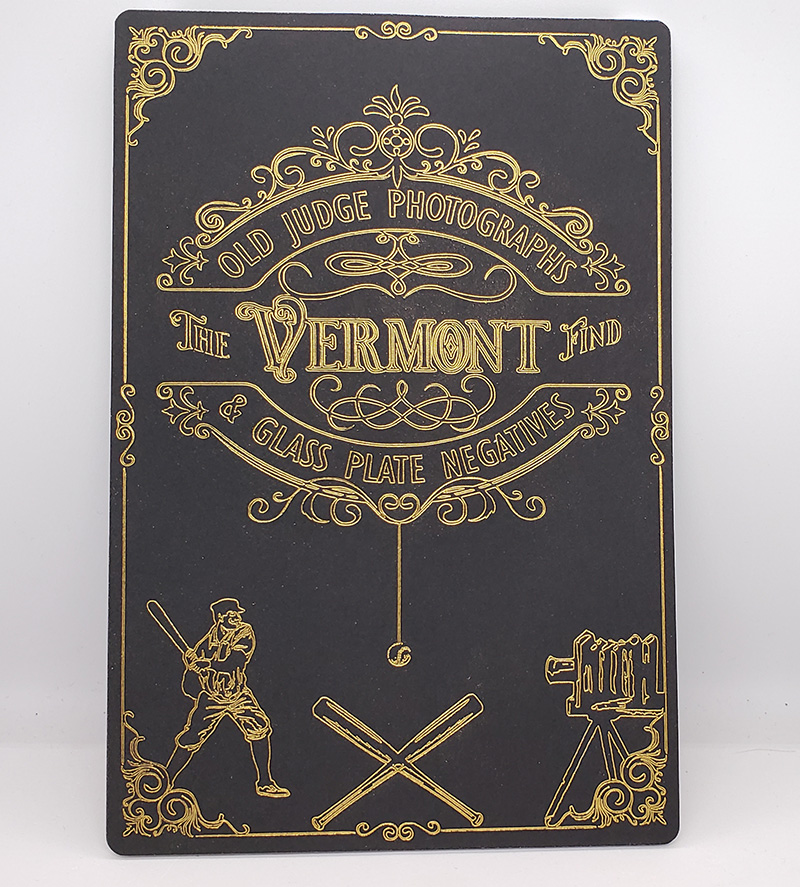 I affixed the top portion to an inner frame, and fully debossed the inside with the same artwork I used for the back.  It looks like leather, but it is cardstock! 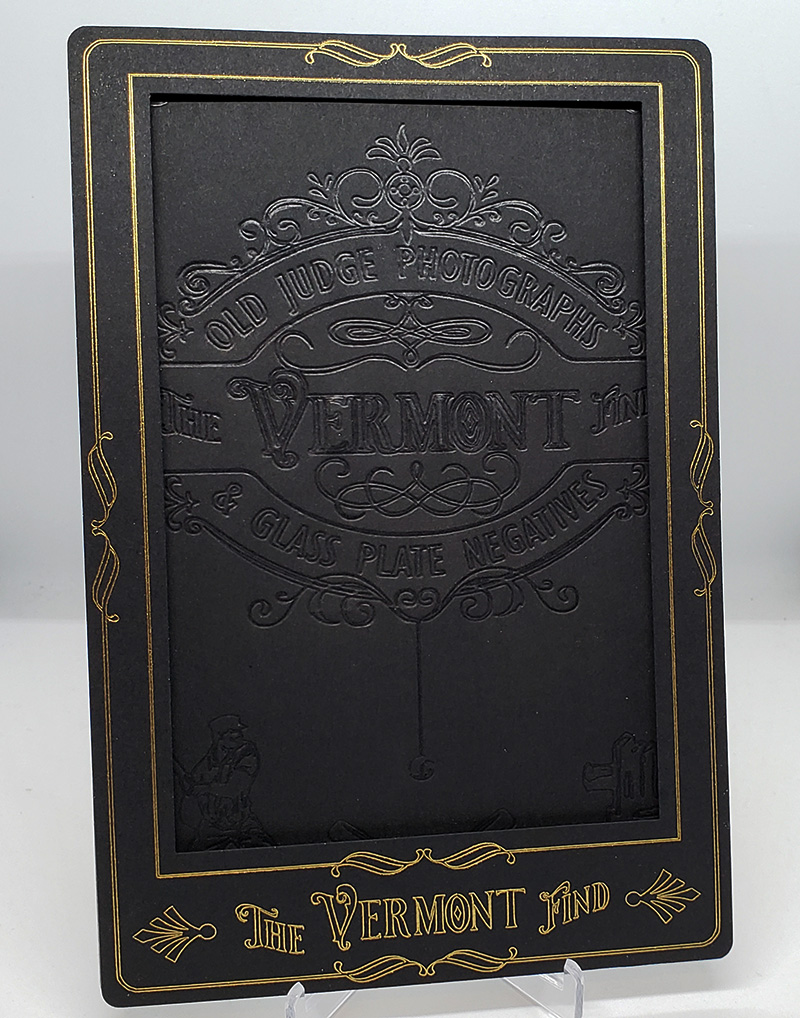 There is a gap at the top so I can slide in the photograph.  Now there is only one thing left to do … slide it in! 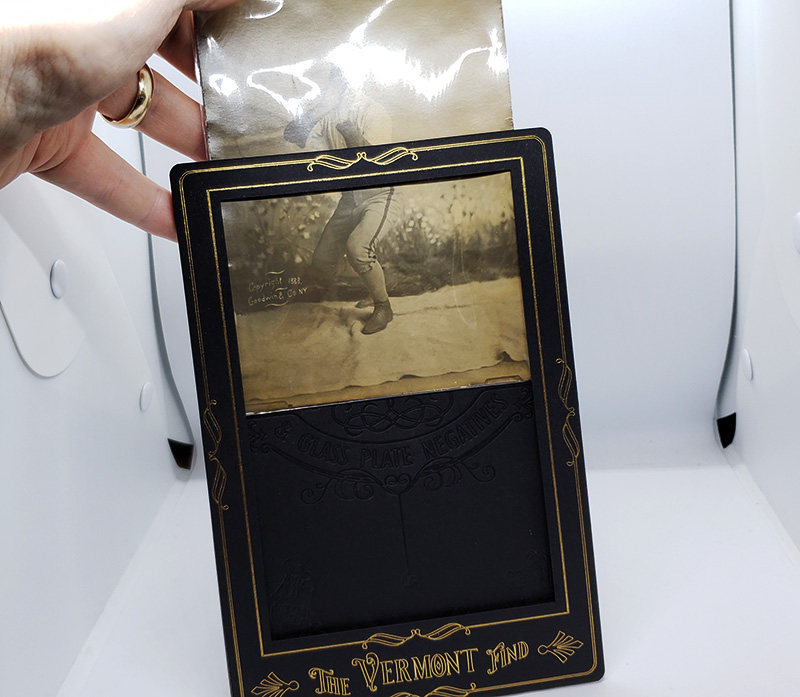 Woohoo!  I LOVE how well it displays now.  After I was done, my wife suggested I do a frame for the Old Judge card to match it.  I couldn’t just leave it as-is, so I did one for the card as well. 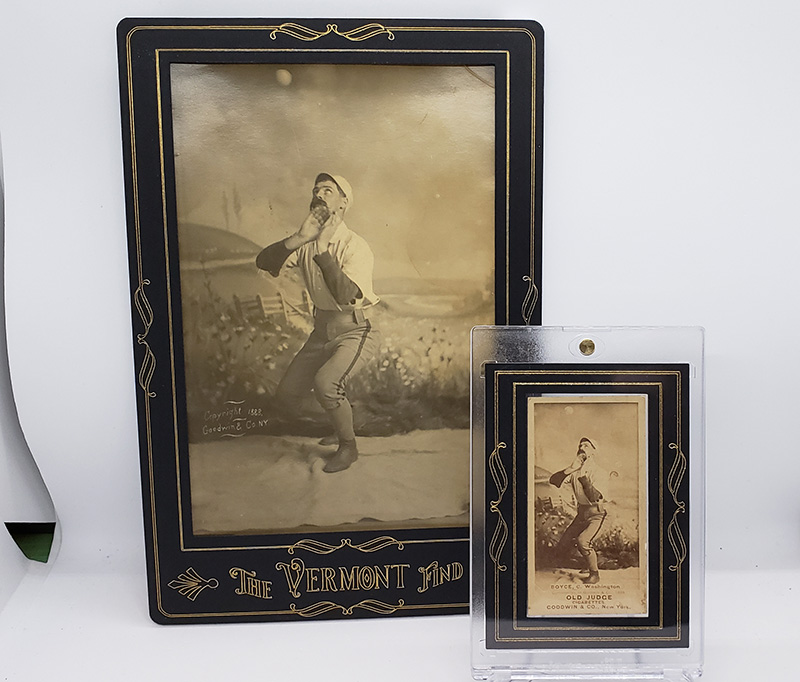 They look great in the light box, but even better on my shelf, which is exactly what I was hoping for.  This photograph makes me feel like I have a window to look into the 19th century – I love it! 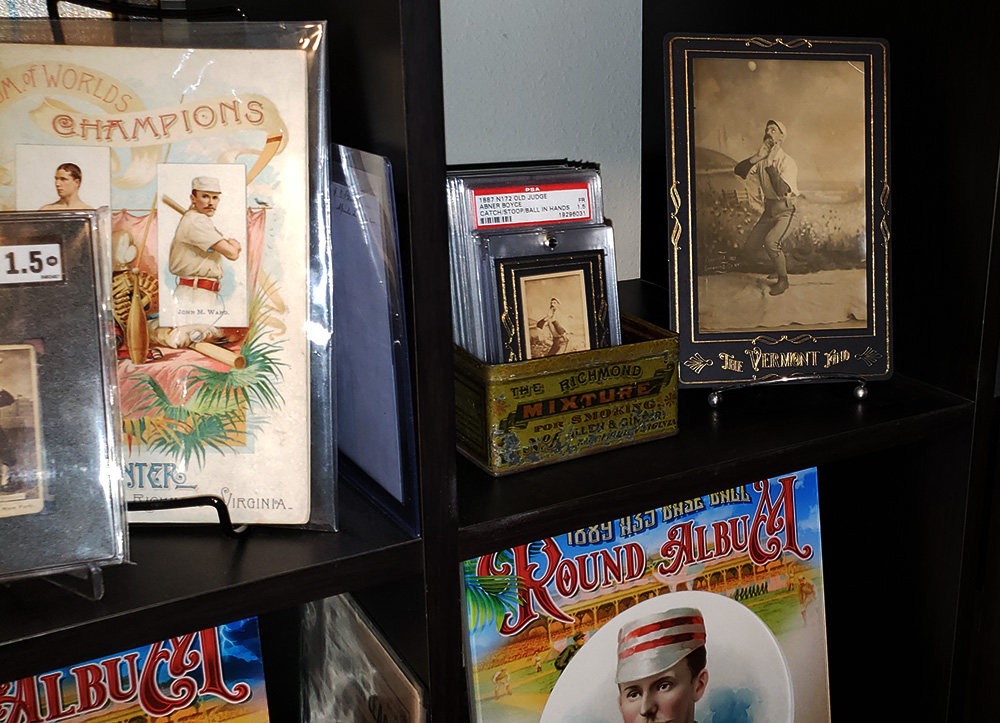 I have created a video below showing me create this, and talking through the project – please give it a look!  It also should play through various other custom projects of mine if you are interested.

This isn’t the end of this story, but I’m not sure when I’ll be able to tell and show the rest of it, so for now, I’ll just say “to be continued…”