When Wade Boggs Gets Involved, Things Get Exciting!

A while back, I was doing some spring cleaning, and ran across these gems – they are believed to be my first ever custom cards!  How’d I do?  Apparently 12 year old Tanner left 41 year old Tanner an Easter egg that I didn’t notice until now.  Check the copyright on the Sosa LOL 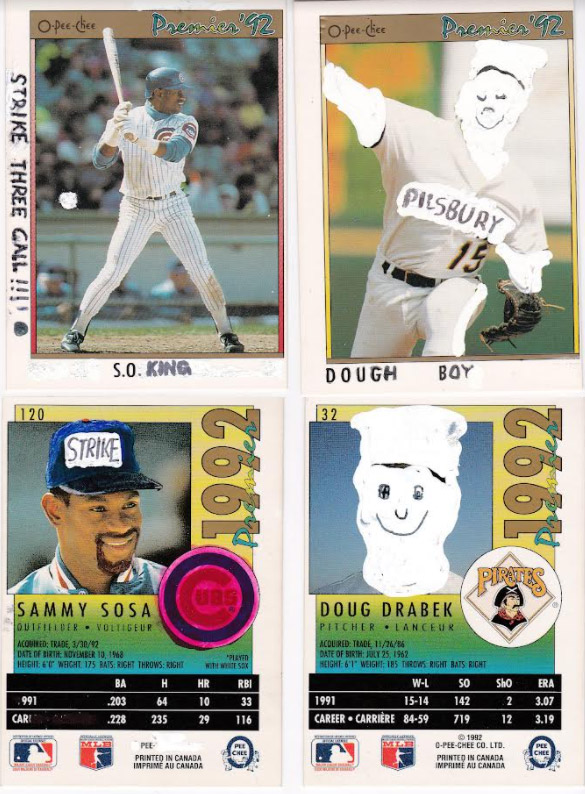 As the years progressed, I got a bit better, and found myself creating cards like crazy for my own collection.  Eventually, people started commissioning me to do special pieces for their collections, and as gifts for others.  I wanted to share a few here that I’ve done over the past few years, and the past few days, with a few stories on each!

Starting off with a custom wood Canseco booklet. I’ve never seen a wood booklet before, and wouldn’t have thought about it, had a guy in Canada not stolen my single regular paper stock Canseco.  I figured instead of just redoing it, I would really amp it up.  The patch is from a jersey worn by Jose (of course!) 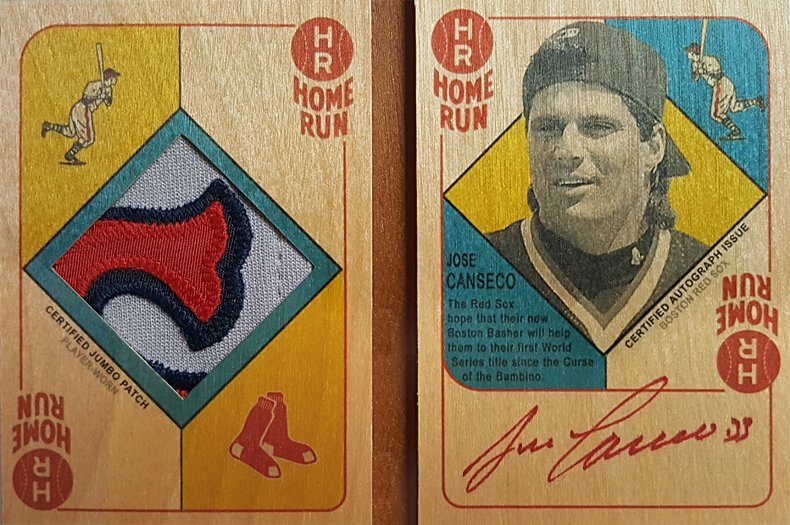 Speaking of wood, this next one is a custom I created a while back also.  For YEARS, I’ve wanted a wooden triple threads patch card of Canseco for my collection.  When they finally made a wood 1/1 of his, the relics were bat pieces.  I *LOVE* that card, but I just had to do my own.  Here it is!  Note the logo that says “Tanner’s Threads”.  I love doing goofy things to these cards 🙂 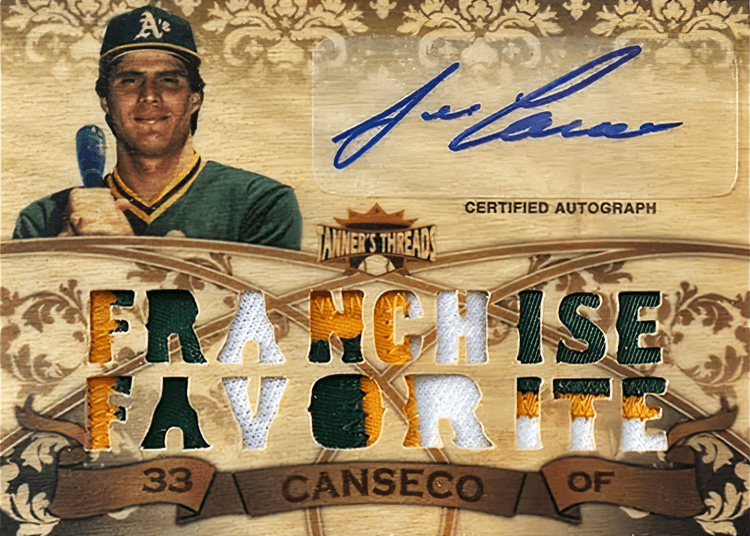 This next one was done for my brother in law who is writing a book about some of his relatives.  One of them was “Big Jim” from the mid 1800s below, whos claim to fame was his height.  My brother in law wanted a circus themed jumbo cut signature, so this is what I came up with! 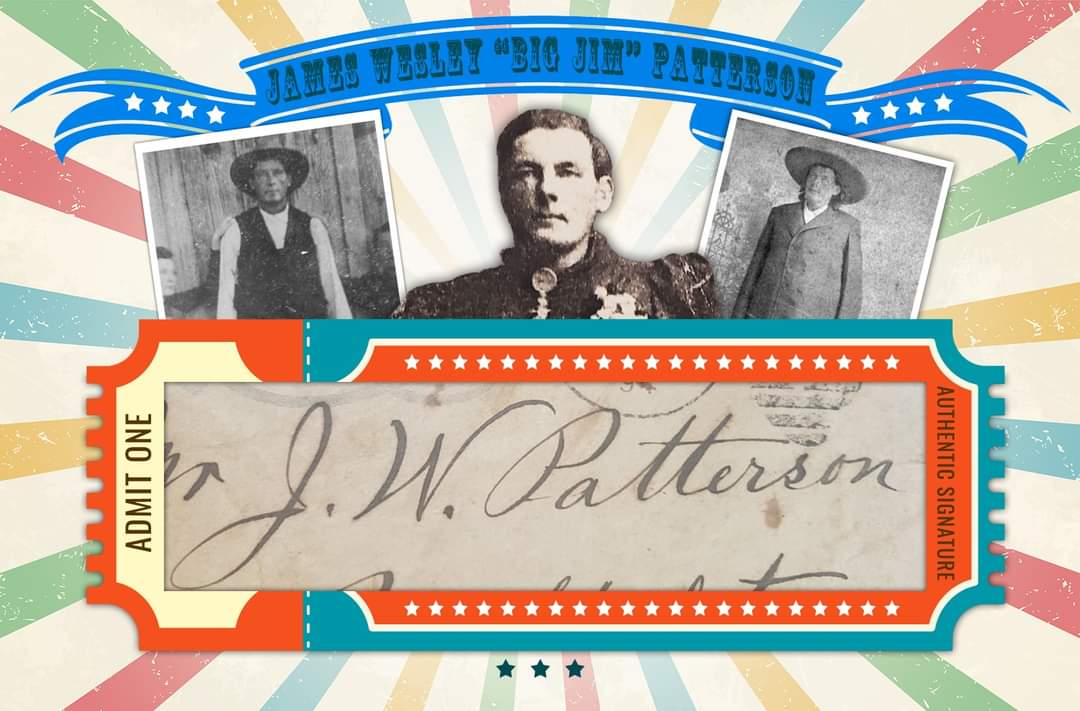 Earlier this year, Jerid reached out to me with a handful of signed cards from his buddy’s favorite players on the Royals… 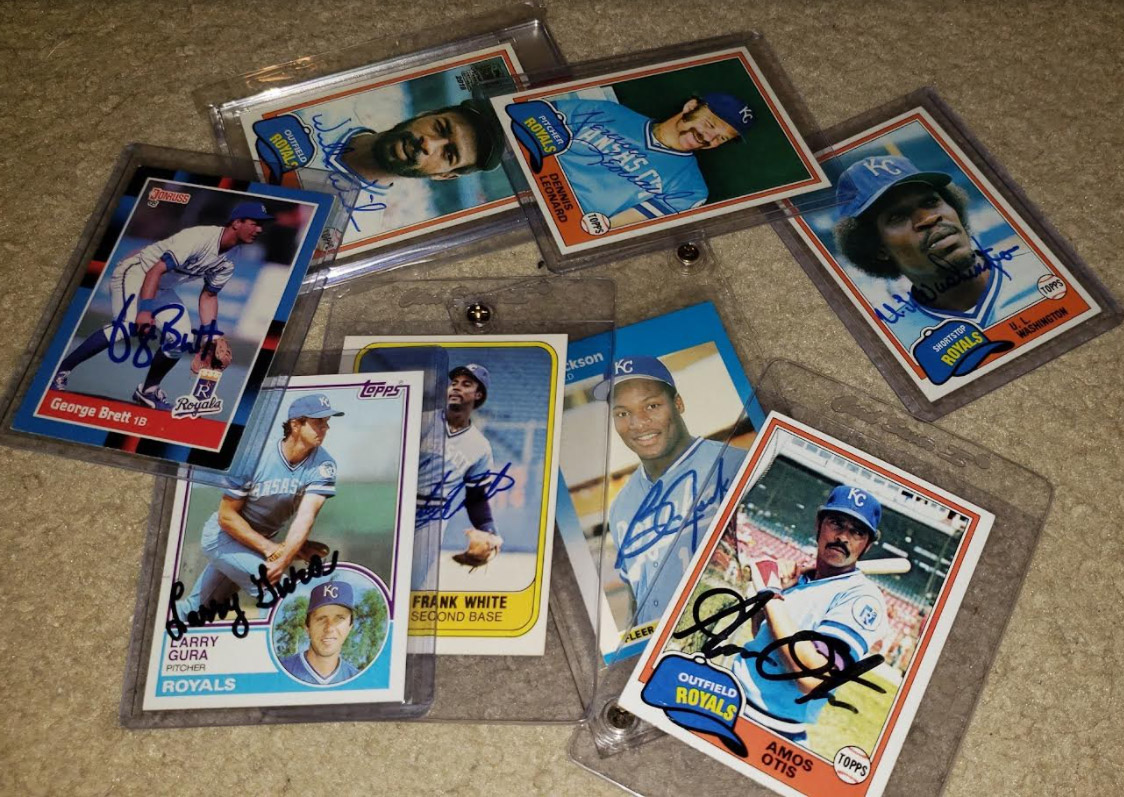 He had me create this jumbo custom booklet for his buddy for his birthday! 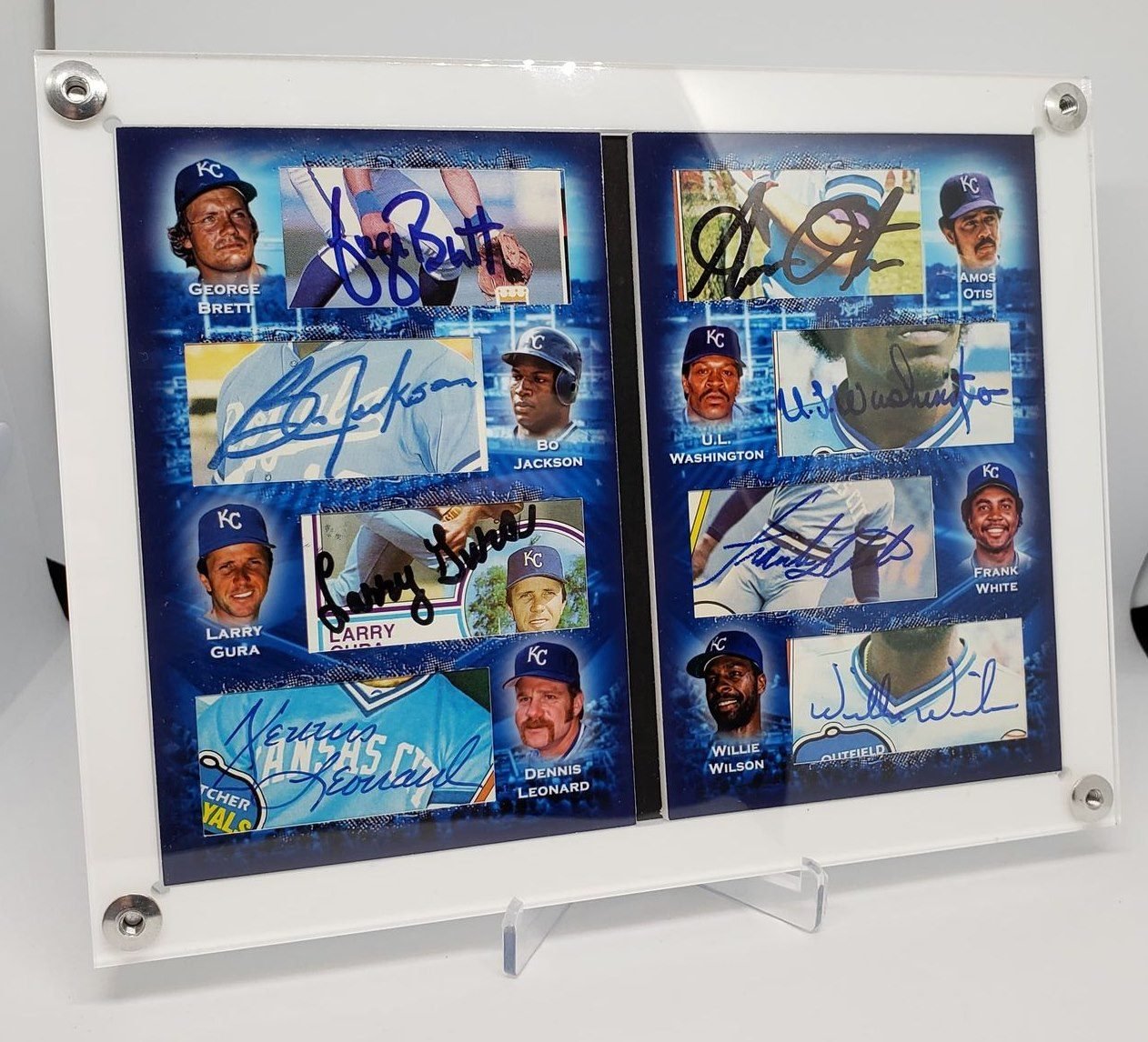 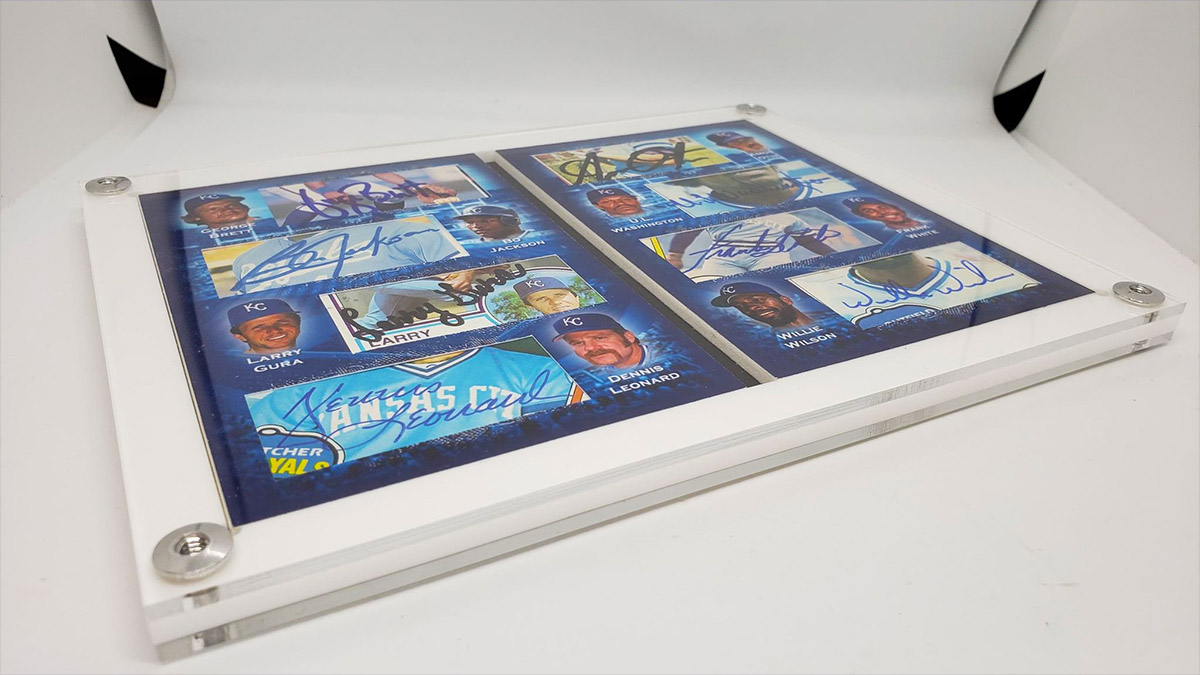 Ossee’s relative reached out to me with an authentic T206, and wanted me to create a jumbo custom with the card embedded in it.  Here it is!  (Don’t hate me for the Yankees hat – it was just the closest one I had to grab for the day – Jose worn, of course!) 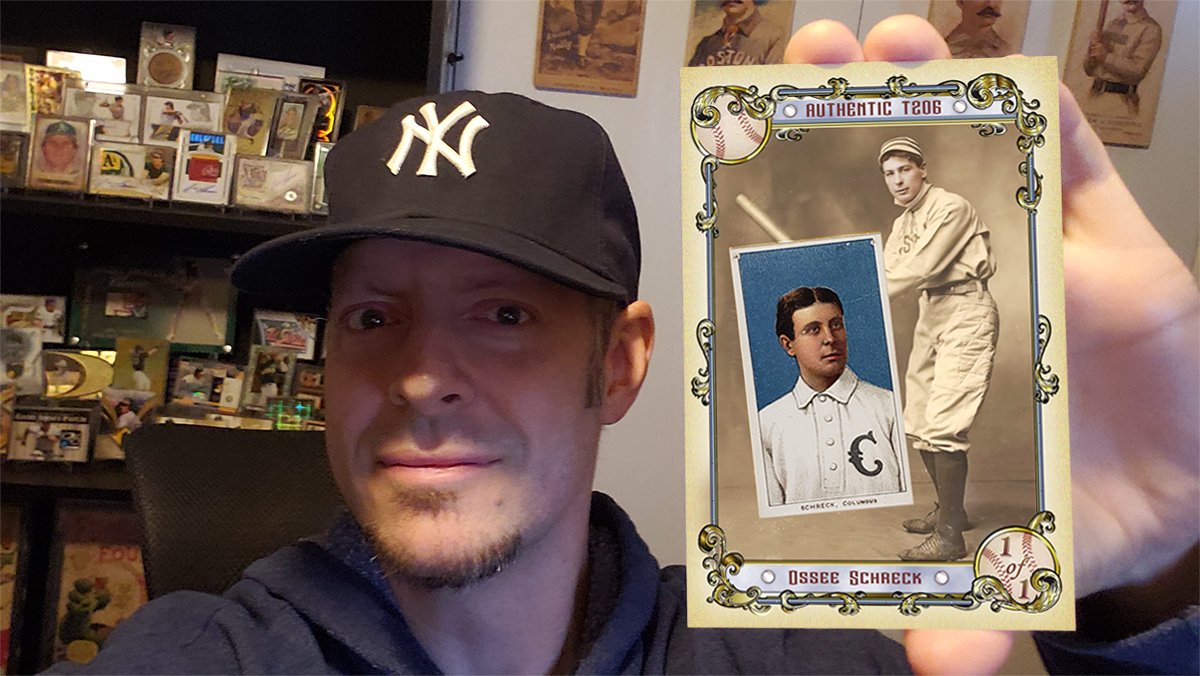 I’m MADLY in love with T206 cards, though I only have two in my collection (both are Cobb!)  Paul Mifsud, the king of signed T206s reached out to me, and had me create these for him. 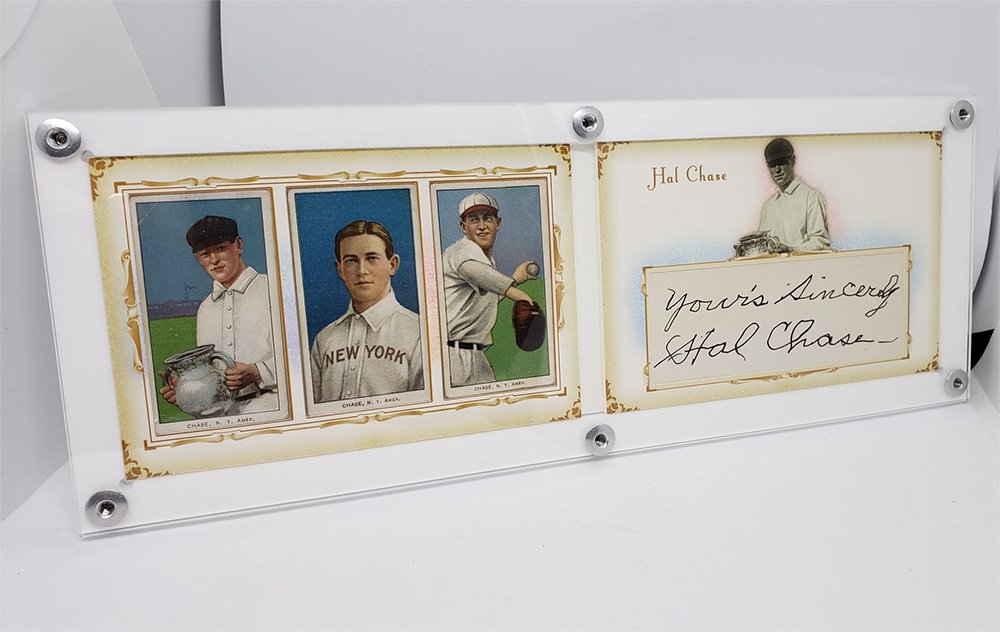 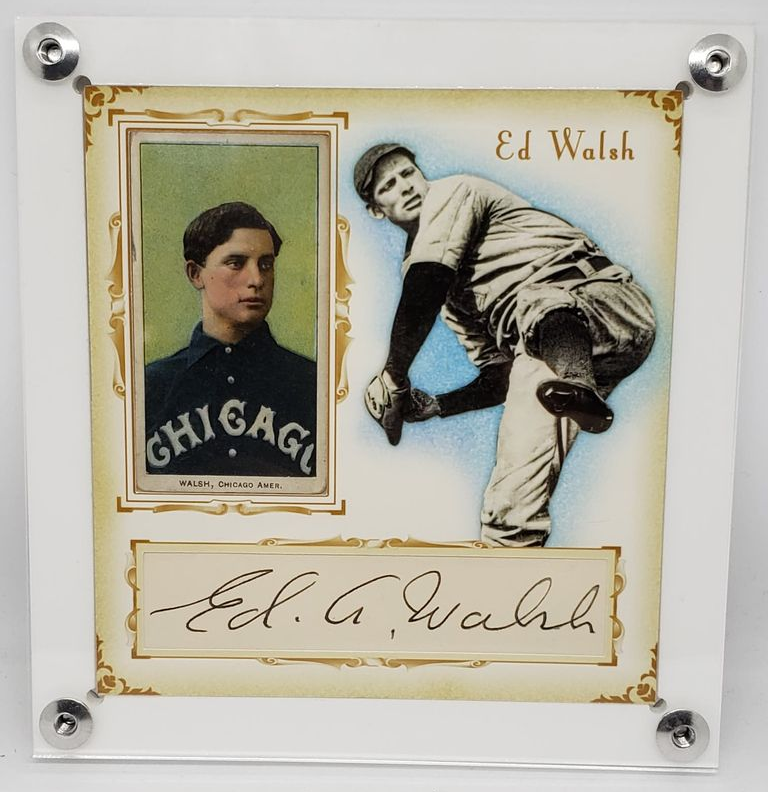 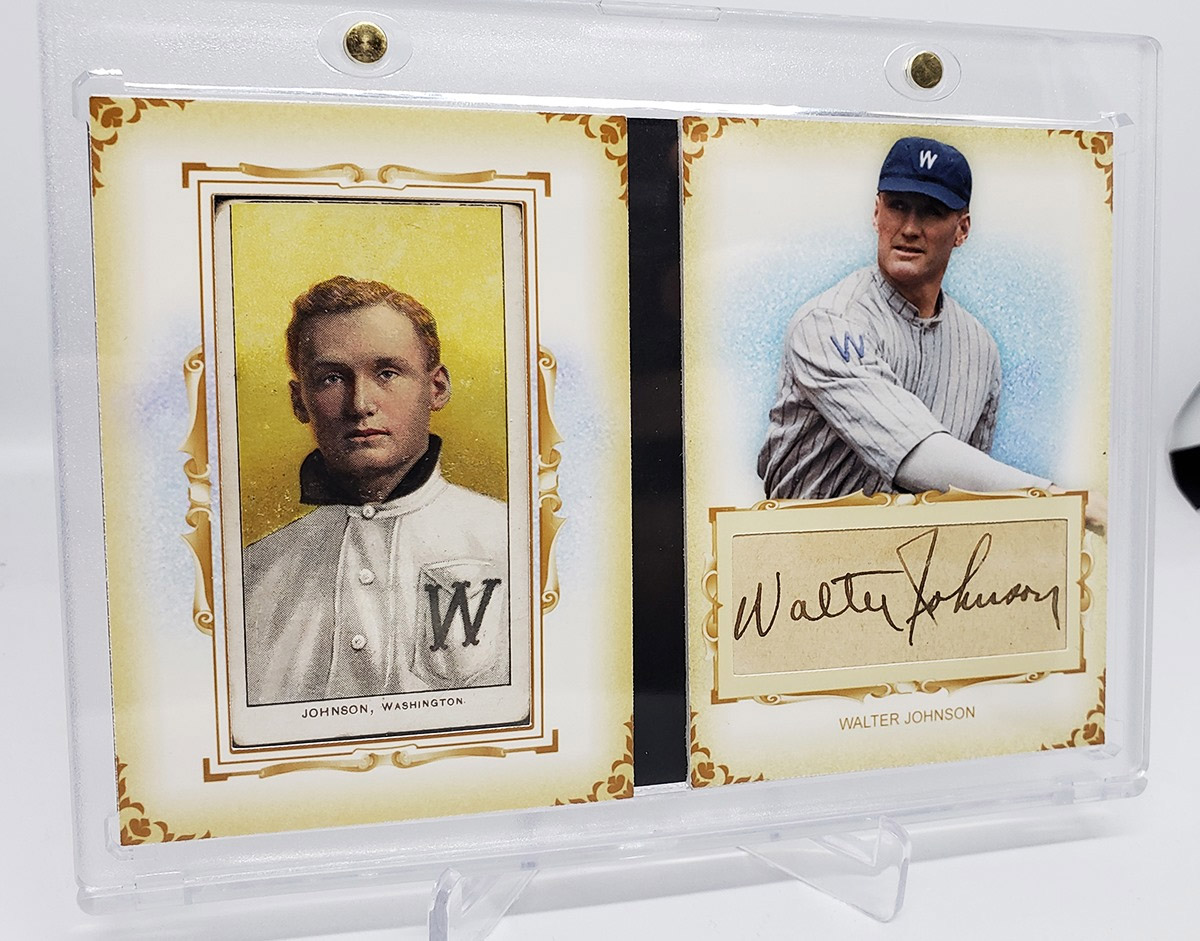 A while back, someone sent me these pieces … 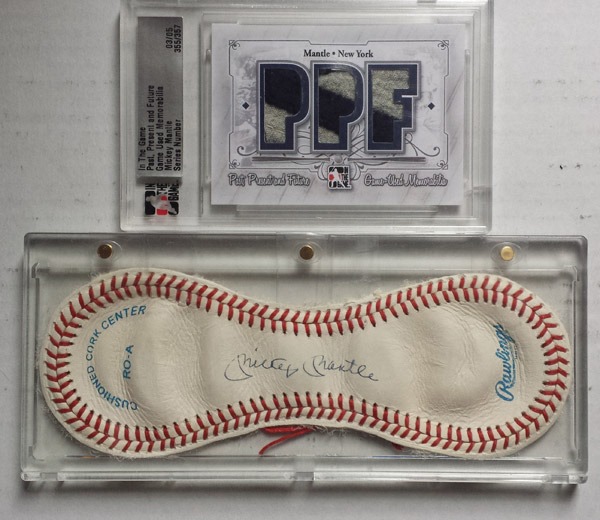 and I created this Mantle custom booklet …

Of course, it’s no secret that aside from my Canseco cards, my favorites to do are “personal” art pieces, like the following …

This booklet was created for the world famous Wade Boggs fanatic Robert Howell a few years back. 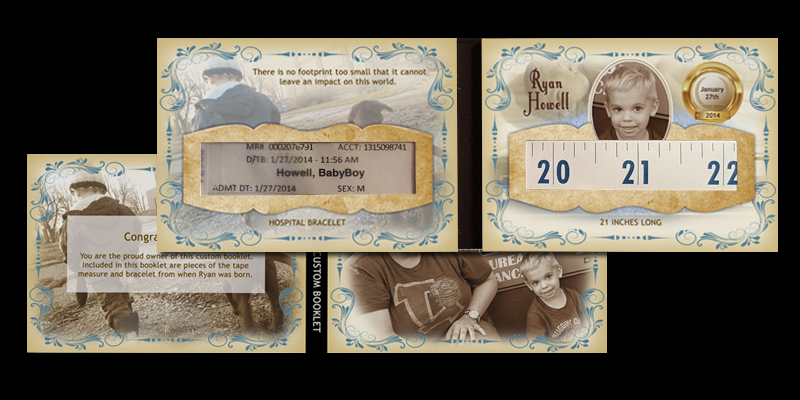 And this one was done for my good friend Jon! 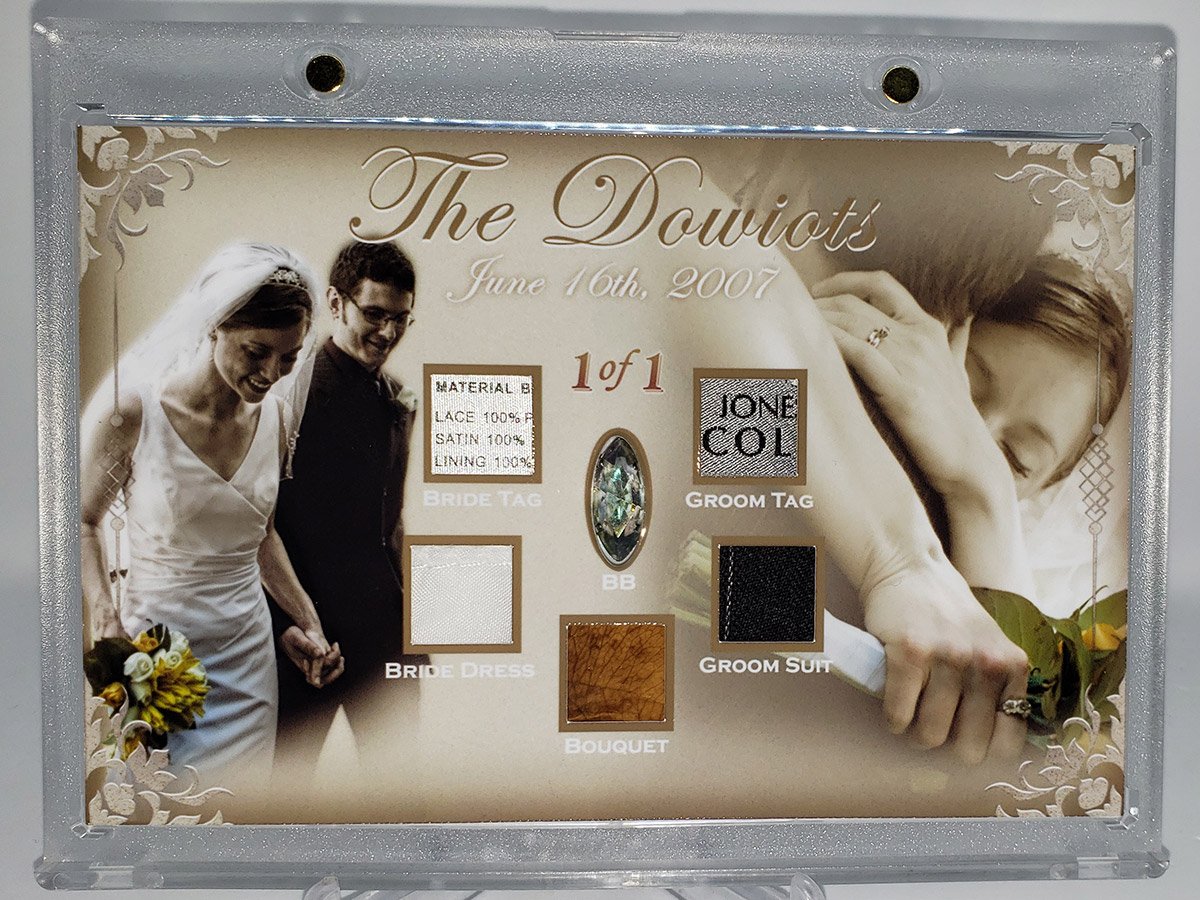 Know what I love more than creating the cards?  The feedback.  I created these for the son James to give to his dad.  Here is how they came out … 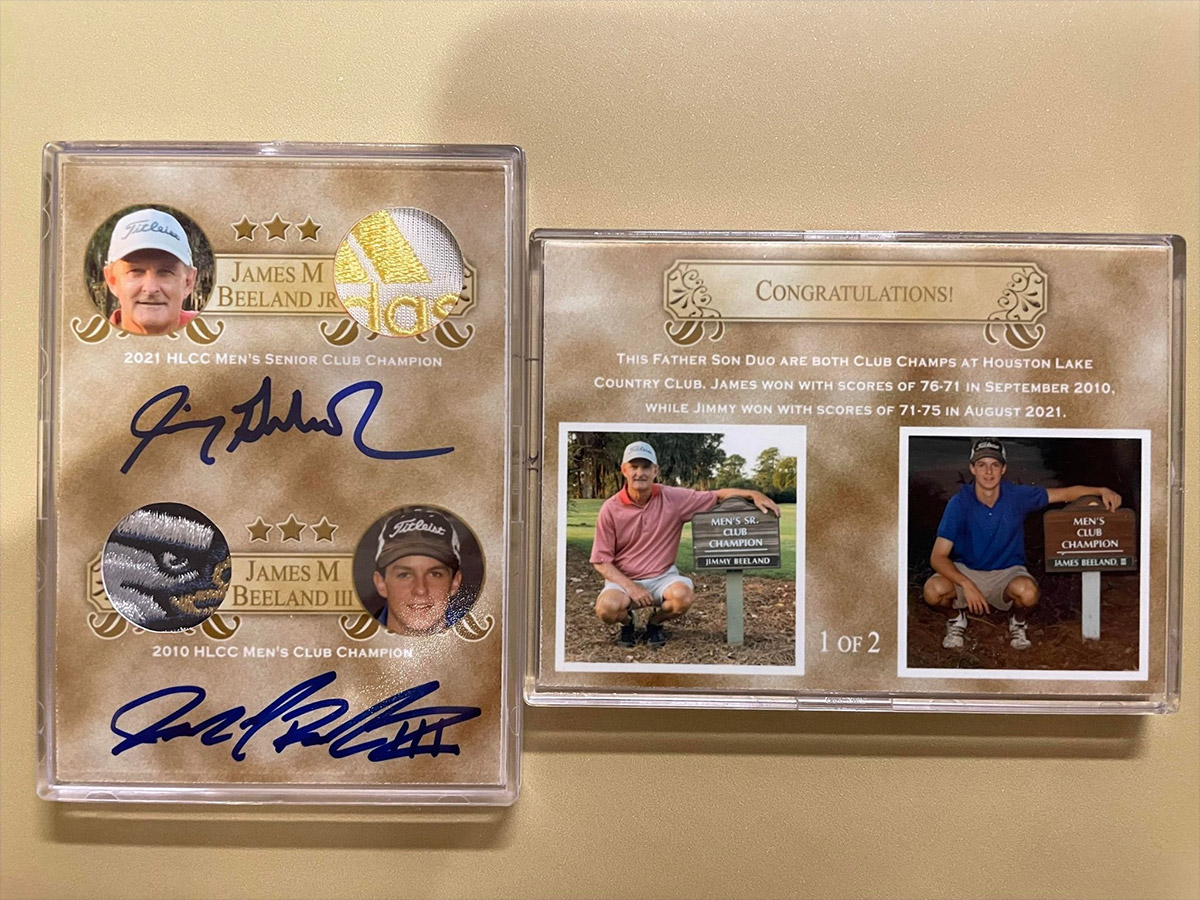 but I gotta say, this is my favorite pic! 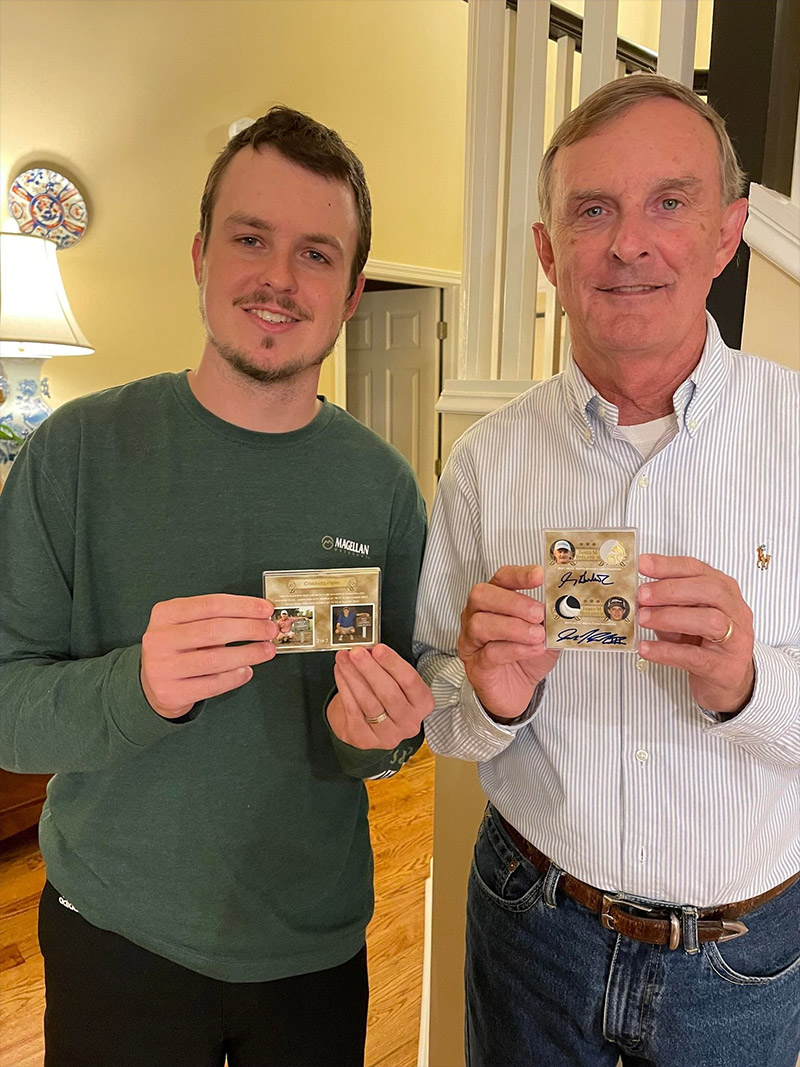 I also love when people come to me wanting to do big pieces of their kids that are in sports.  Here is a quad patch jumbo of superstar Alana!  This was the subject of a tutorial I did a while back. 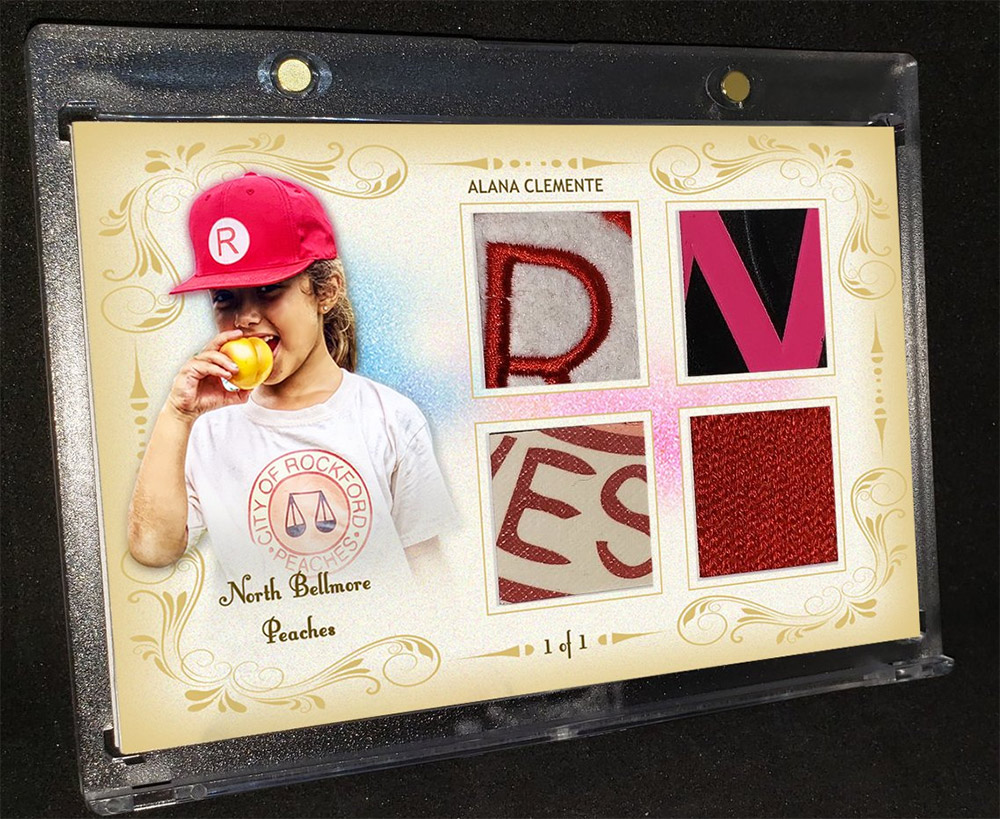 In that same vein, I just created this one this past week of Kayla.  She is an *amazing* player, and the piece below is actually the largest baseball related piece I’ve ever done!  I LOVE the lion face logo. 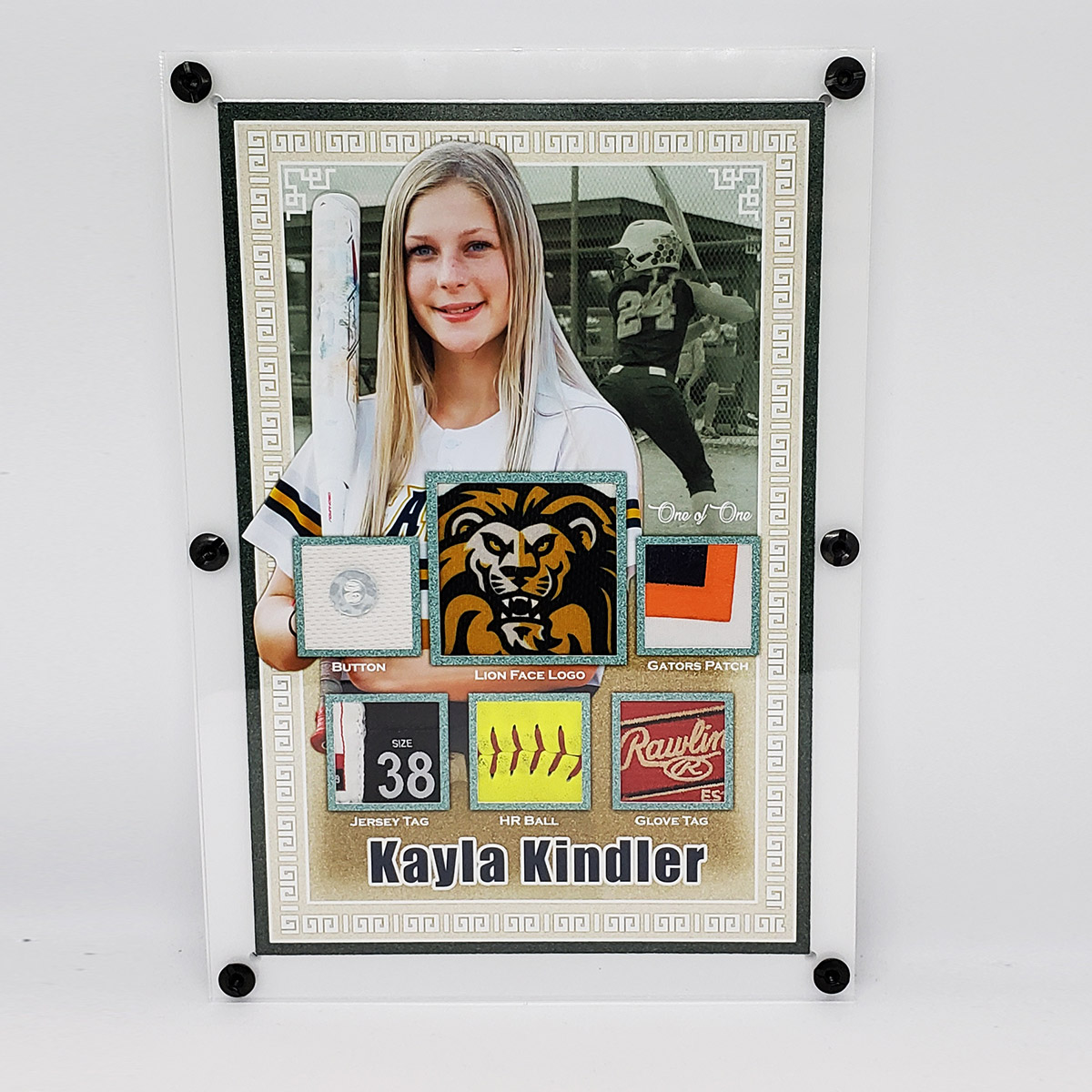 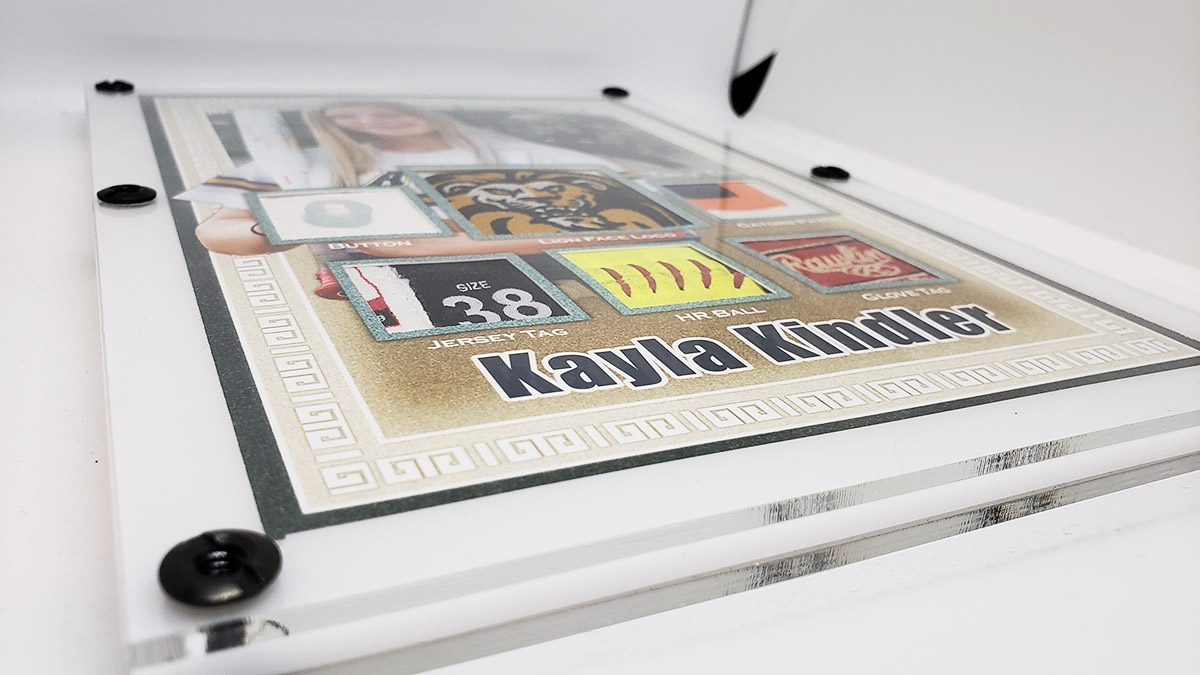 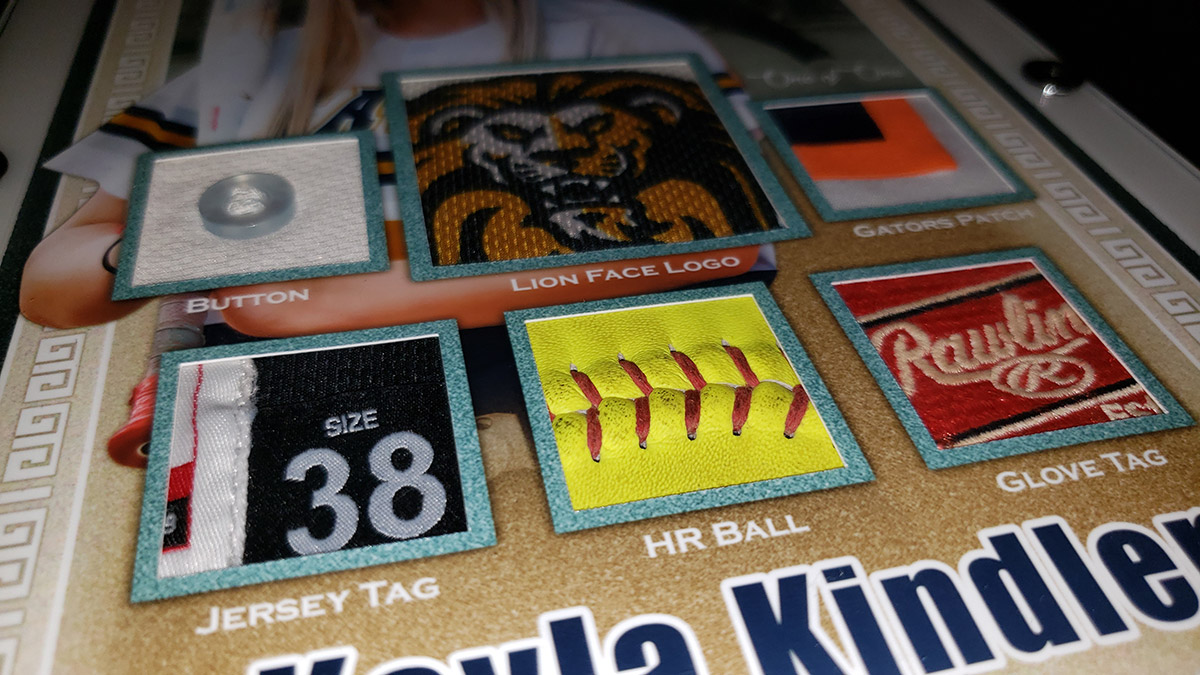 Since Christmas is just around the corner, I thought I’d share once again my custom Elf card that was created out of a gift bag.  When I posted it online, a bunch of people asked me to create others, so I did. 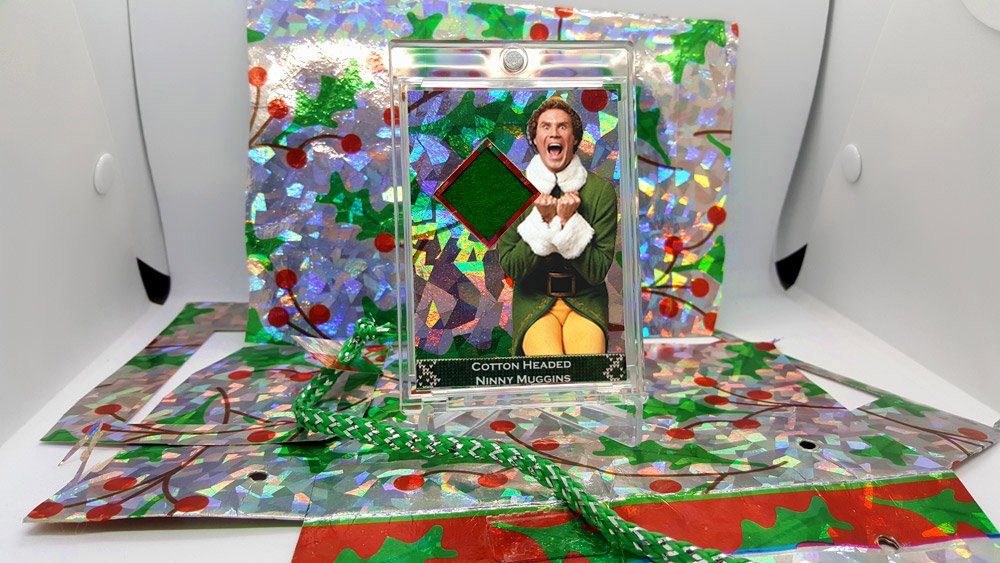 A few other requests were these: 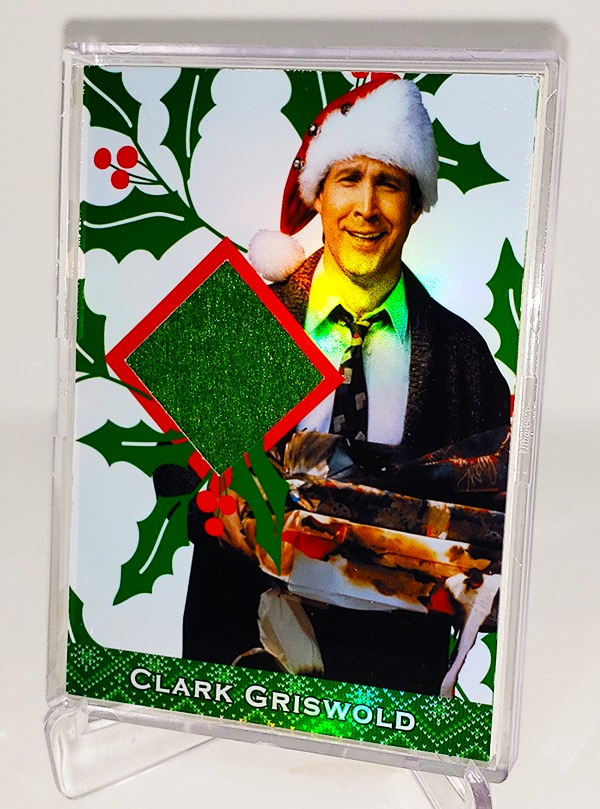 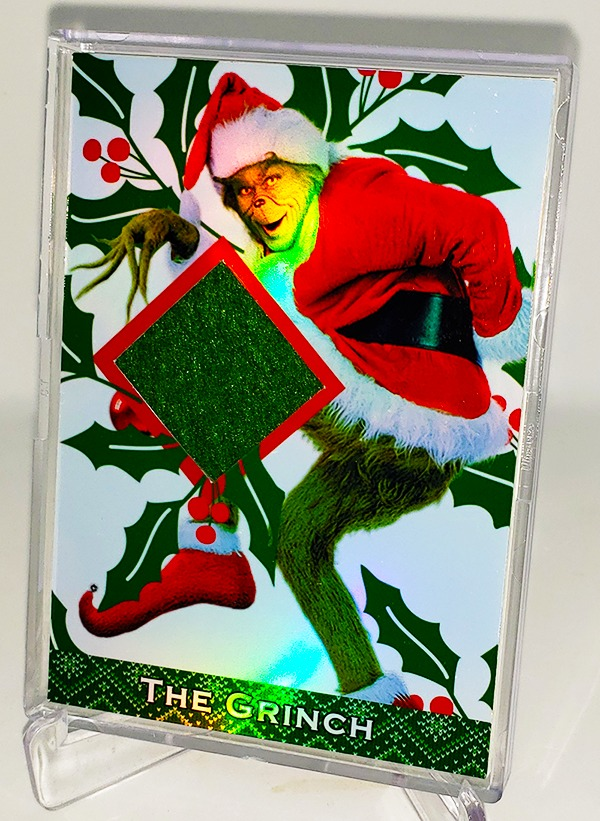 Did I mention I love creating Canseco customs for my collection? 😉  I came across this one that I did recently from years ago. It was actually featured in Beckett magazine! 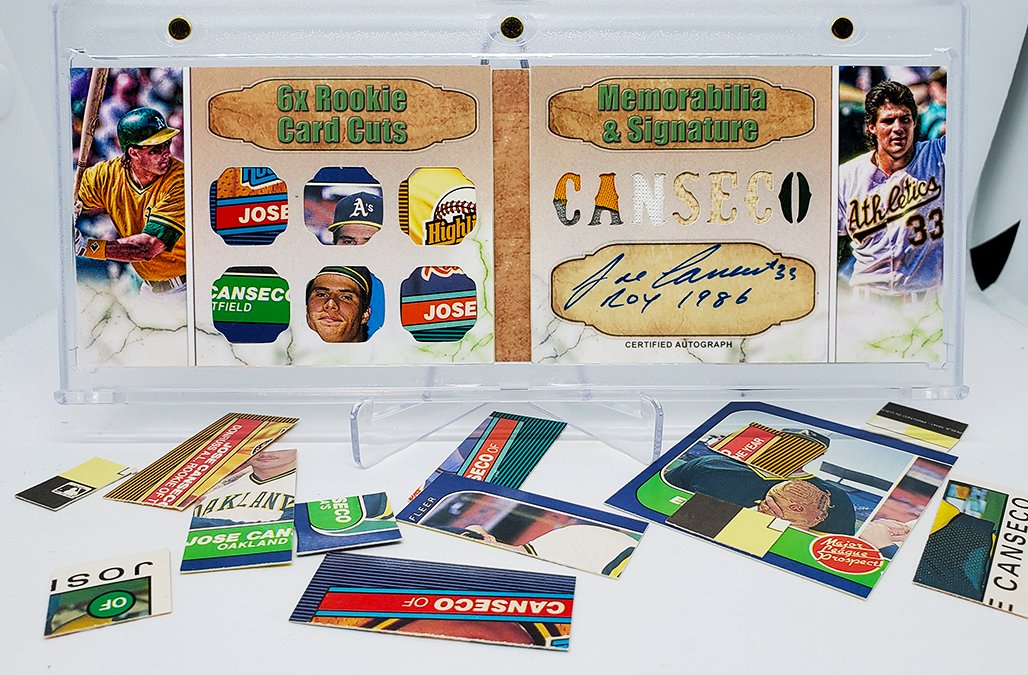 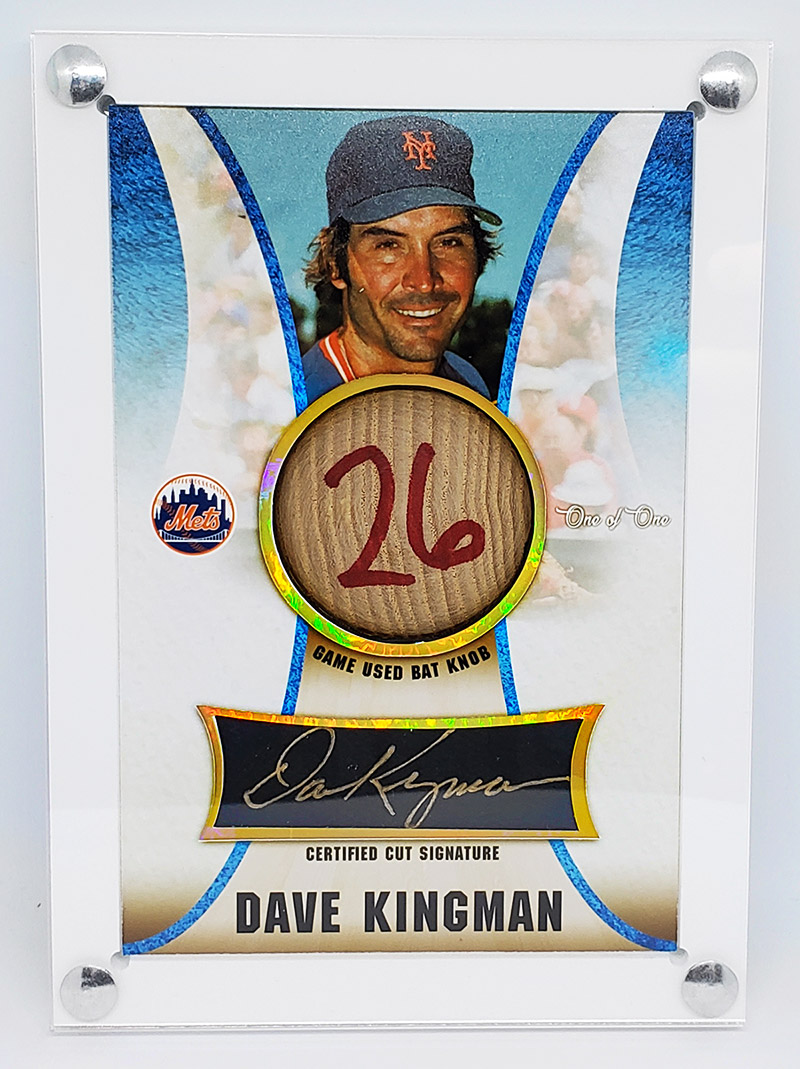 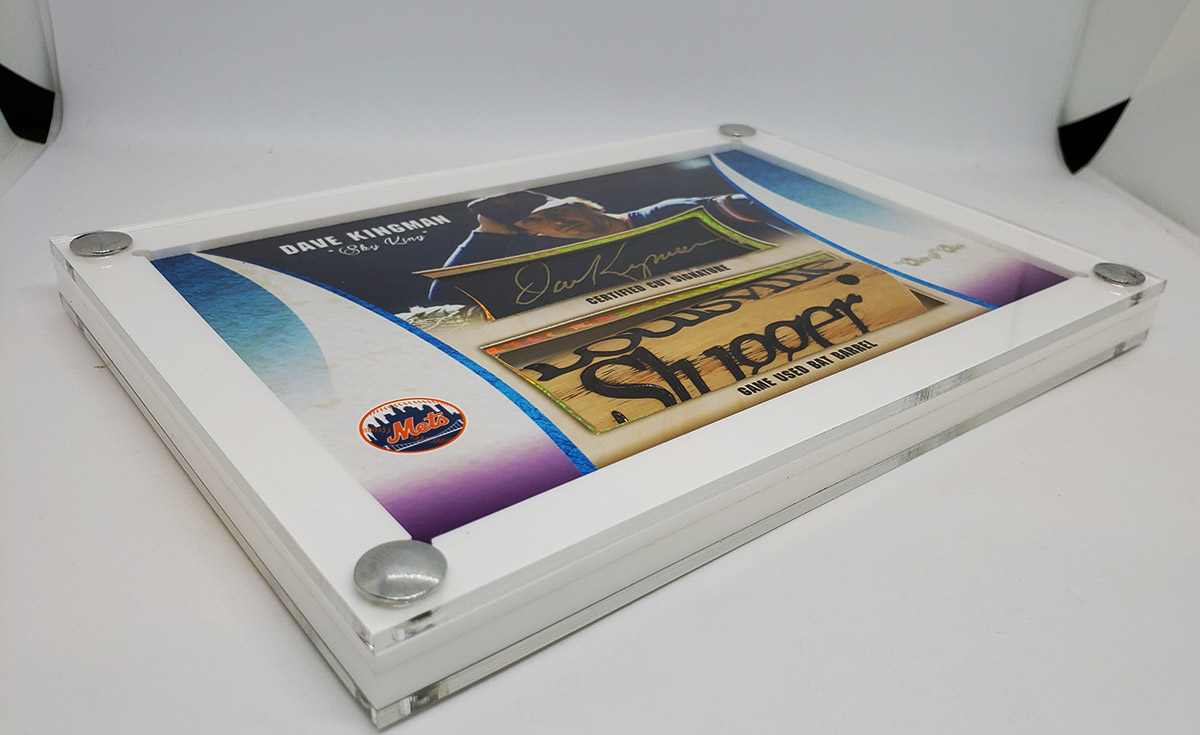 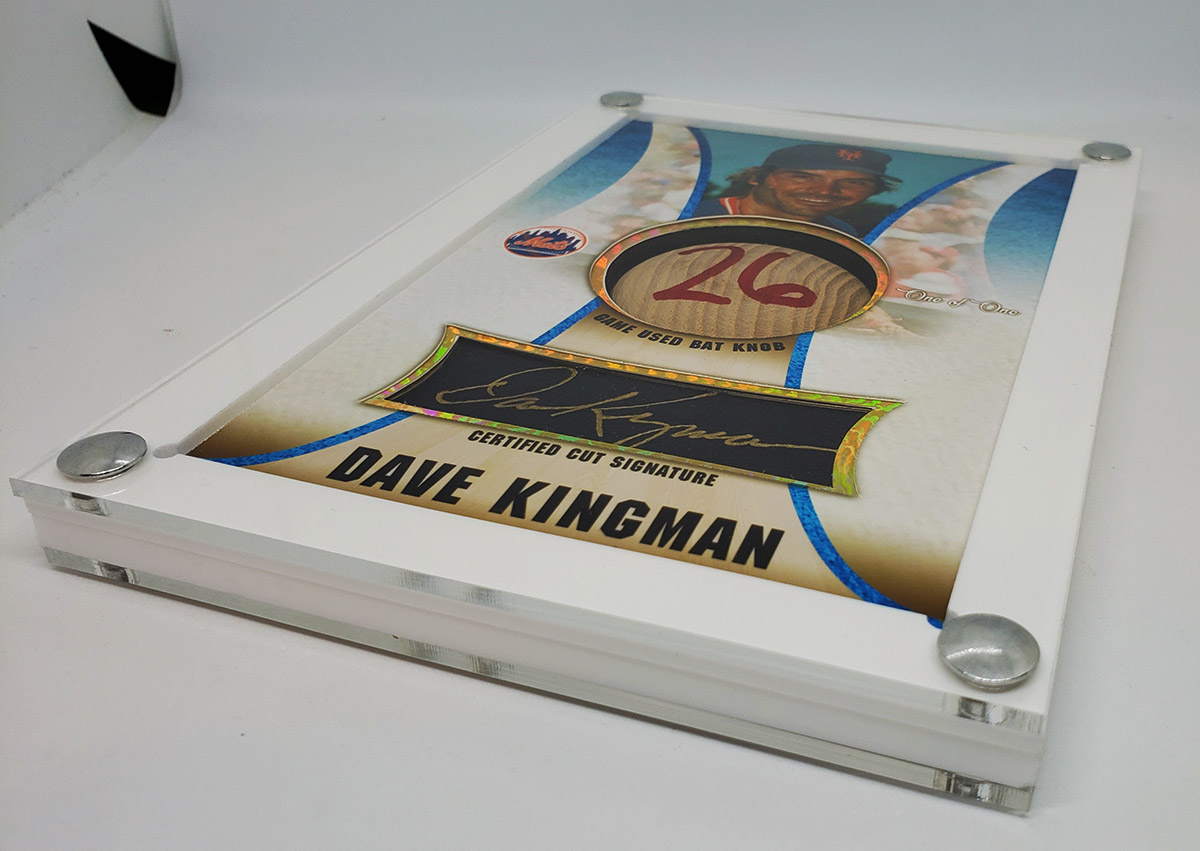 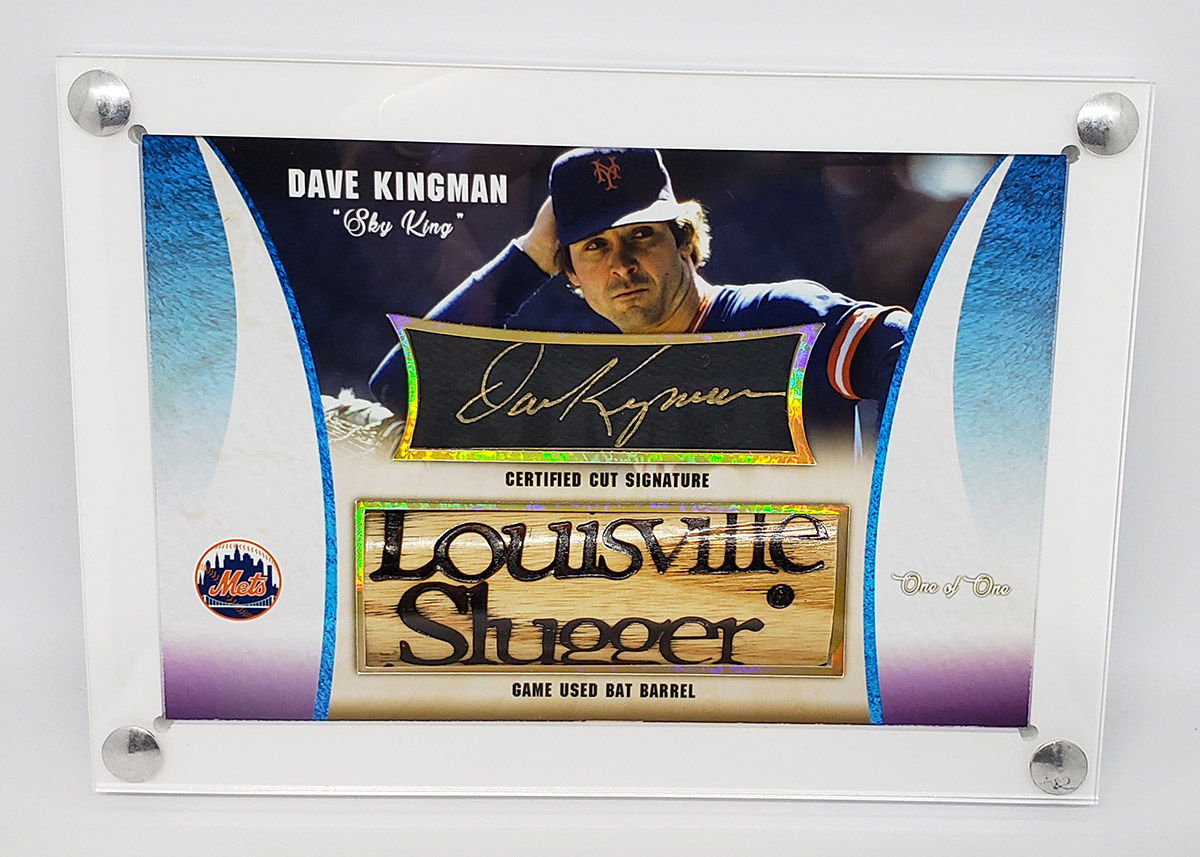 Last but not least is probably my favorite “story” – it is stories like this that makes me love doing these so much.

Nathan sent me a game used hat, and had me cut it up, create six special jumbo pieces for the Boggs boys.  Wade then allowed Nathan to send the pieces directly to him so he could sign them specially for their collections.  Here is one of them! 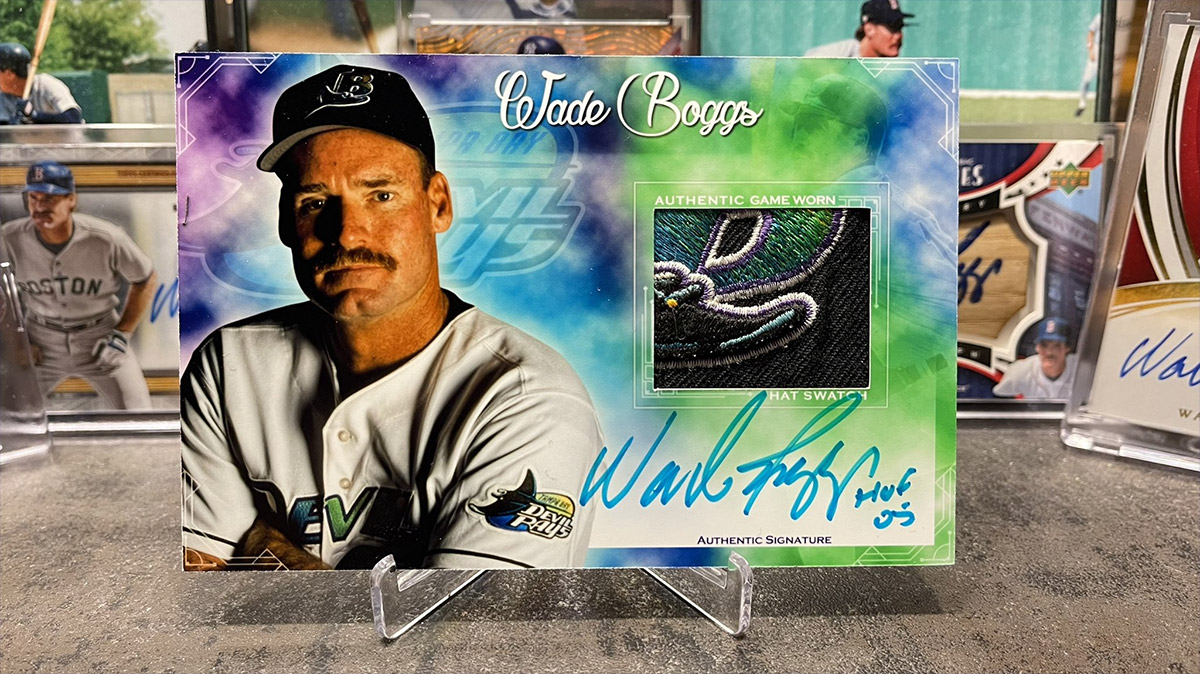 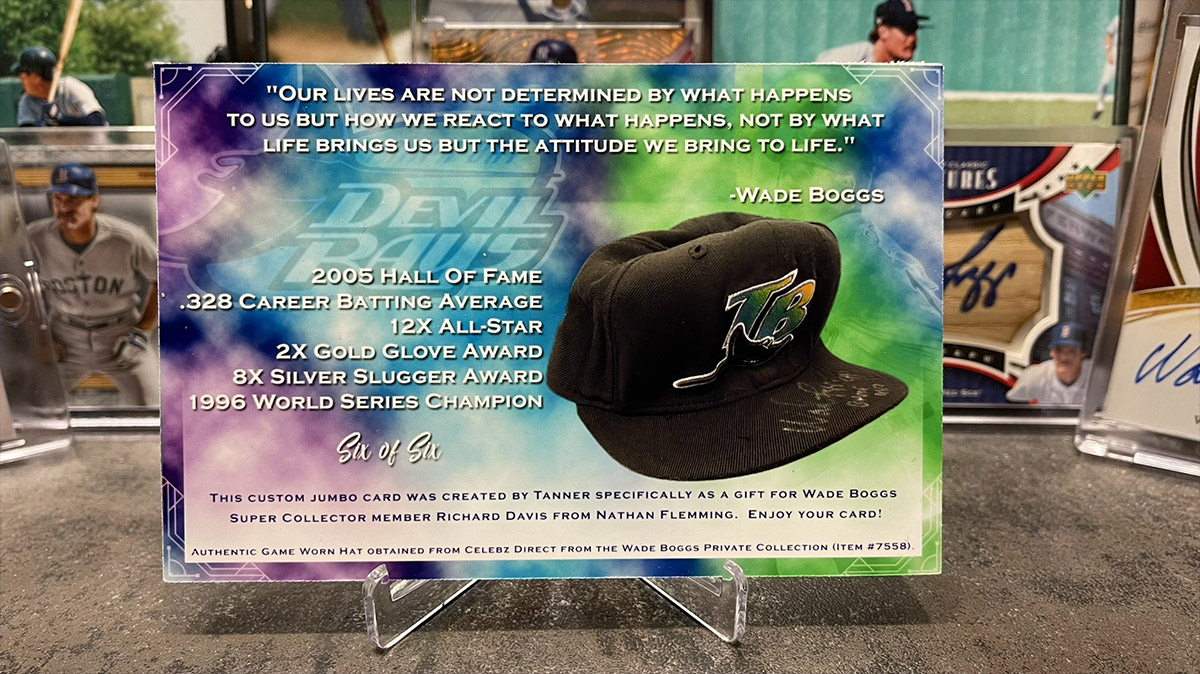 As a side note, I always admired Boggs as a player, but seeing how he interacts with his fans post-career (he literally just told Rich, the proud owner of the Boggs Tavern Happy Birthday!), he has made me a much bigger fan of his!  Since he and Jose were teammates, maybe a custom dual needs to happen 🙂