YASSSS!!!! I Unexpectedly Captured a Unicorn!!!

Twenty years ago today, Jose took his last swing in the majors. It is hard to believe that two decades have passed since we have been able to enjoy his handiwork at the plate!  It also is crazy to think that he has been retired for longer than he played (1985-2001).

If you read this previous article, you know how special patch cards of Jose Canseco that were created during his playing career are to me.  There are very few – only two official releases.  The 2000 Upper Deck Game Jersey Patch (STILL gives me goose bumps!) … 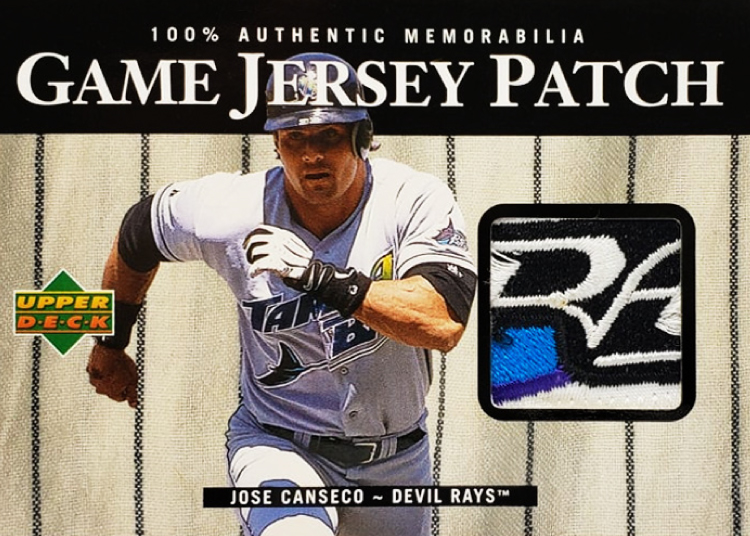 Let’s have some fun with numbers, shall we?  The 2001 patch set has 15 cards, whereas there are 11 gold parallels.

These numbers are astounding.  Seriously, think about it for a moment.  Back in my day, the junk wax era cases had 20 boxes each.  If that were the case with these, one would have to open 469 CASES to expect to get a single gold Canseco #/25!  Now imagine the difficulty in trying to find a specific Canseco from the run.  This is a far cry from how easy it is to pull serial numbered cards nowadays.

I didn’t really think about these being the only patches released during Jose’s playing career when I was a supercollector.  To me, they were just Devil Rays patches – keep in mind, I never had anything even remotely close to the quality of these patches in my previous collection.  In all honesty, it wasn’t until just this past year that the significance of these patches became clear to me.

A number of months back, a good friend of mine who also collects Canseco ran into a jaw dropping 01 Gold. 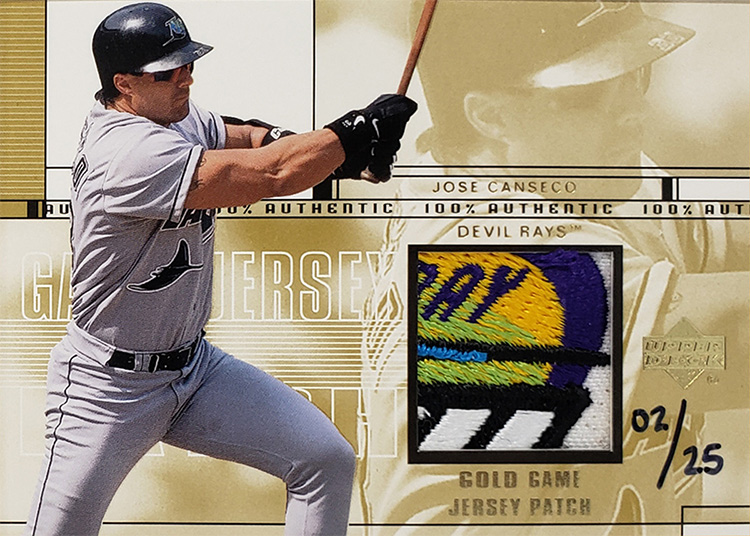 SIX colors!  This literally might be the most colorful patch card that has ever been created for Canseco.  It’s enough to be thankful for Jose’s time in Tampa Bay for this reason alone, LOL!  The original owner of it actually pulled this from a pack when he was 12 years old.  Can you imagine?!?!  With the odds of pulling this, it had to feel like winning the lottery.  It is an extremely foreign idea to me to pull this special of a card of your favorite player during his career, potentially while watching him come up to bat.  Wow.  Just wow.

The only patch to rival it in this category in my opinion was a true unicorn – one I had only seen in privately shared pictures over the years from an unknown source: The other half of this, the most colorful portion of the Devil Rays logo.

I think we’ve all seen extremely special grail/unicorn cards from pictures that have no mention of ownership that we would absolutely love to have, but would be like finding a needle in a haystack…the size of a baseball field.  They may not be 1/1s, but might as well be, given the patch quality – realizing the rest of the print run may not have anywhere near as nice of a version.

A few months back, the unthinkable happened.

I met another collector, and what he showed me made my jaw drop … twice.

THE OTHER HALF OF THE PATCH SECTION!!!  This is the *EXACT* unicorn that has been seen in pictures passed around over the past several years!  It was tucked away in a non Canseco collector’s collection for ages. 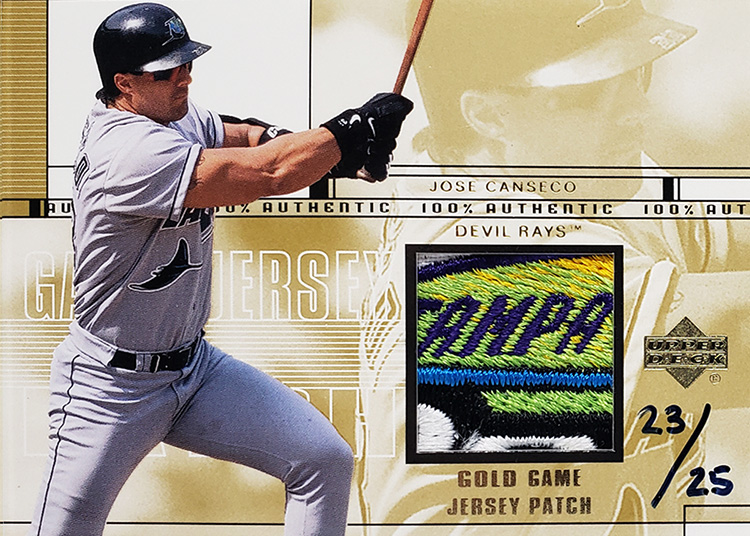 Together, they show the completed “Tampa Bay” in the most colorful part of the logo. 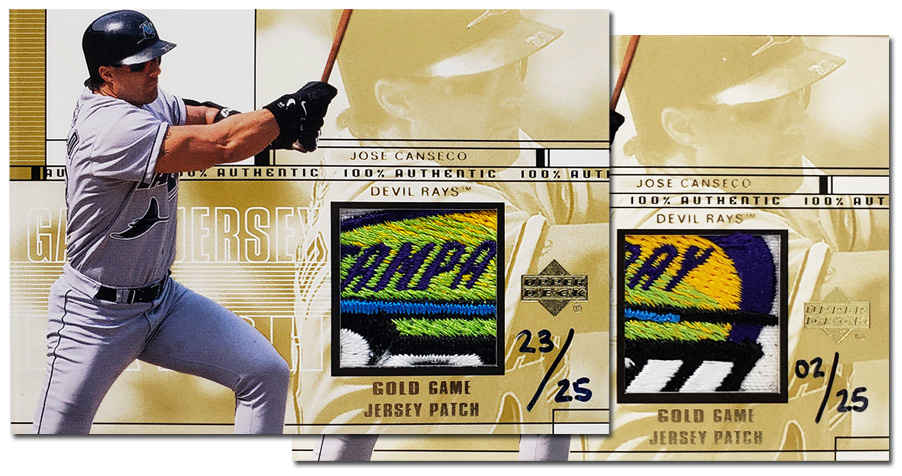 They are now reunited for the first time in 20 years after sitting on my baseball hero’s arm during his playing career. They are the most colorful patches of Canseco I have ever seen! Both have black, white, blue, purple, green, and yellow.

Given their rarity, beauty, release date, the fact that they are the most eye-popping colorful patches I’ve ever seen, and the fact that they are from the only serial numbered patch run released during his playing career, these are some of my favorite cards, ever. They might even surpass all the crazy barrels/knobs/etc of today, and the 90s inserts/parallels in my book. There is a certain magic to them that transcends the almighty 1/1 serial number in most cases for me…by a long shot.

Hunting a 1/1 from a new release is a cake walk compared to finding something like this.  The hundreds and hundreds of cases that had to have been opened for this to appear over the past couple decades is simply mind boggling.  That is what gives this unicorn status – the odds of it surfacing were simply astronomical.

I still can’t get over the fact that 20 years ago was the last time Jose swung a bat in the majors. Perhaps that’s why the release date is so important to me – card companies will continue making prettier and jumboier (lol) patch cards until the end of time, but they simply can’t recreate the magic of a multi colored patch card that was released during Jose’s playing career.