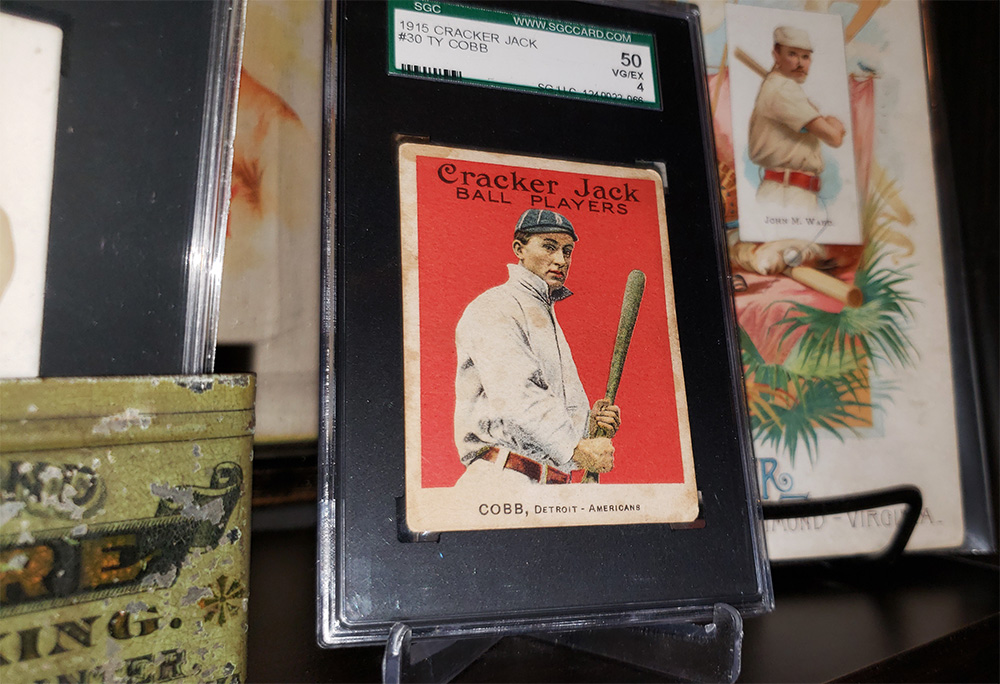 “Buy me some peanuts and…”

A year and a half ago, I picked up this beautiful 1915 Cracker Jack Ty Cobb. While we 80s babies had to deal with wax stains, World War 1 era collectors dealt with caramel stains from Cracker Jack packages. The staining on this copy is an unobtrusive reminder of its journey – a journey I can only dream about.

Imagine a child over a century ago sitting in the stands at a Tigers game holding a package of Cracker Jacks with his favorite baseball player coming up to bat. Between pitches, he digs into the package to retrieve his reward.
To his excitement, it is his favorite player – Ty Cobb! The very man who was at bat, and moments away from hitting a triple, then stealing home to win the game. The rush of excitement between the game winning feat and new baseball card would be a welcome distraction from the looming war in 1915.

The blood red backdrop tells the story of World War 1, and yet with all the rage going on in the world, we have the photograph of the best player on the planet at the time standing in the forefront – a man who later became Captain in the United States Army during the First World War.

If there ever was a card that seems to perfectly embody the aura/mystique of baseball and baseball card history in general, I would say it is this card. Heck, the very brand name is mentioned in our favorite sport’s national anthem “Take Me Out to the Ball Game”.  I guess that’s one of the things I love about baseball card collecting – we can use them to mark important times in our history as a nation.

If cards could talk!