What is a Supercollector?

Here is a link to my podcast episode regarding this article if you’d rather listen instead of read!

Some spell supercollector as one word, others spell it as super collector – no matter which was you use it, it is a fascinating subject. Part of the text below has been taken from my book Confessions of a Baseball Card Addict, but most of it is new content.

ANATOMY OF A SUPERCOLLECTOR 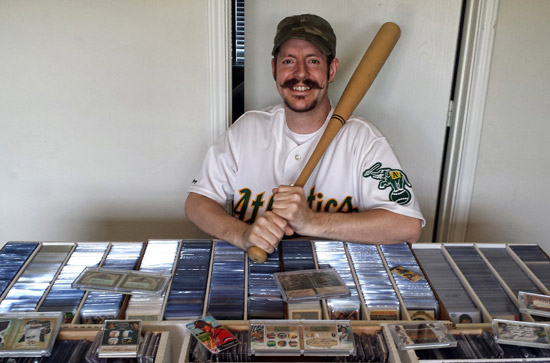 Me, back in 2015 as a supercollector with eleventy billion Canseco cards

I find tremendous enjoyment and satisfaction in having a small collection of cards that I can display, but for others, being a supercollector might be where true joy for you is in this hobby – going through the process of putting together a massive collection of any given player, doing a run of complete sets, going hard after a single team, or even a specific type of memorabilia.  There is something powerful about building something meaningful, and it is incredibly fun for other collectors to watch – and even help.

Before I go any further, I thought I’d give it a shot to describe what a Supercollector looks like. Generally speaking, a Supercollector is simply someone who obsessively collects a certain niche (be it a player, team, etc.) with laser focus, and goes way beyond casual collecting. Supercollectors typically share many of these characteristics:

To other collectors, a Supercollector’s name is what may first come to mind when they think of the player they collect. For example, when I hear anything about Andre Dawson, I don’t just think of his stellar career; I think about Dustin and his amazing Dawson collection, boasting over 150,000 cards of the Hawk alone. Whenever I hear anything about Mark Teixeira, I don’t just think about how great of a player he was; I think of Robert and his jaw-dropping collection of over 1,000 1/1 cards of Tex.  Anthony and his amazing Gary Carter collection, Art and his amazing Reggie Jackson display, and the Boggsfather – Rich with his incredible Wade Boggs tavern.  Being synonymous with a specific collecting niche is the dream of any Supercollector.

CONFESSIONS OF A FORMER SUPERCOLLECTOR

Ever since my sell off, I’ve purchased multiple Jose Canseco large collections, and at times have accumulated much more than I had ever anticipated, all while trying to assure everyone I wasn’t a supercollector.  A few times, this was met with “Face it, Tanner – you are a supercollector”.   Here is a picture of my accumulation of 2005 Prime Patches – I had dozens – and this was *after* my big sell off in 2018. 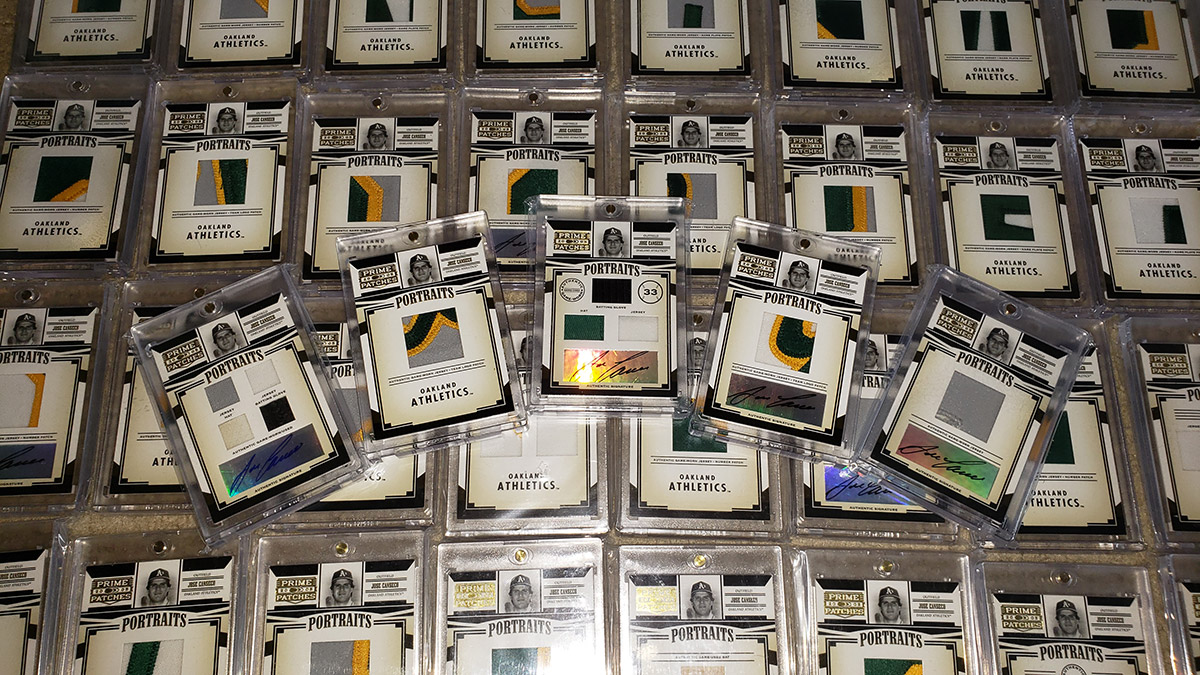 I had boxes and boxes of cards like this, and other patch cards.  How many of the cards do I have left in the above picture?  Exactly zero.  After taking a step back, I had to re-evaluate.  Am I a supercollector, or am I not?  Surely I’m a big fan of “collect what you like” but at what point does a card type lose its specialness?  I found for me, I had a lot of lingering supercollector tendencies.  Over the past couple years, I’ve learned to keep only what I love, and buy only what gets me excited.

Don’t get me wrong – having several of the same patch card makes for a fun photo op, but the ability to really hold one and admire it for what it is gets much more difficult when it is surrounded by several others that look similar. 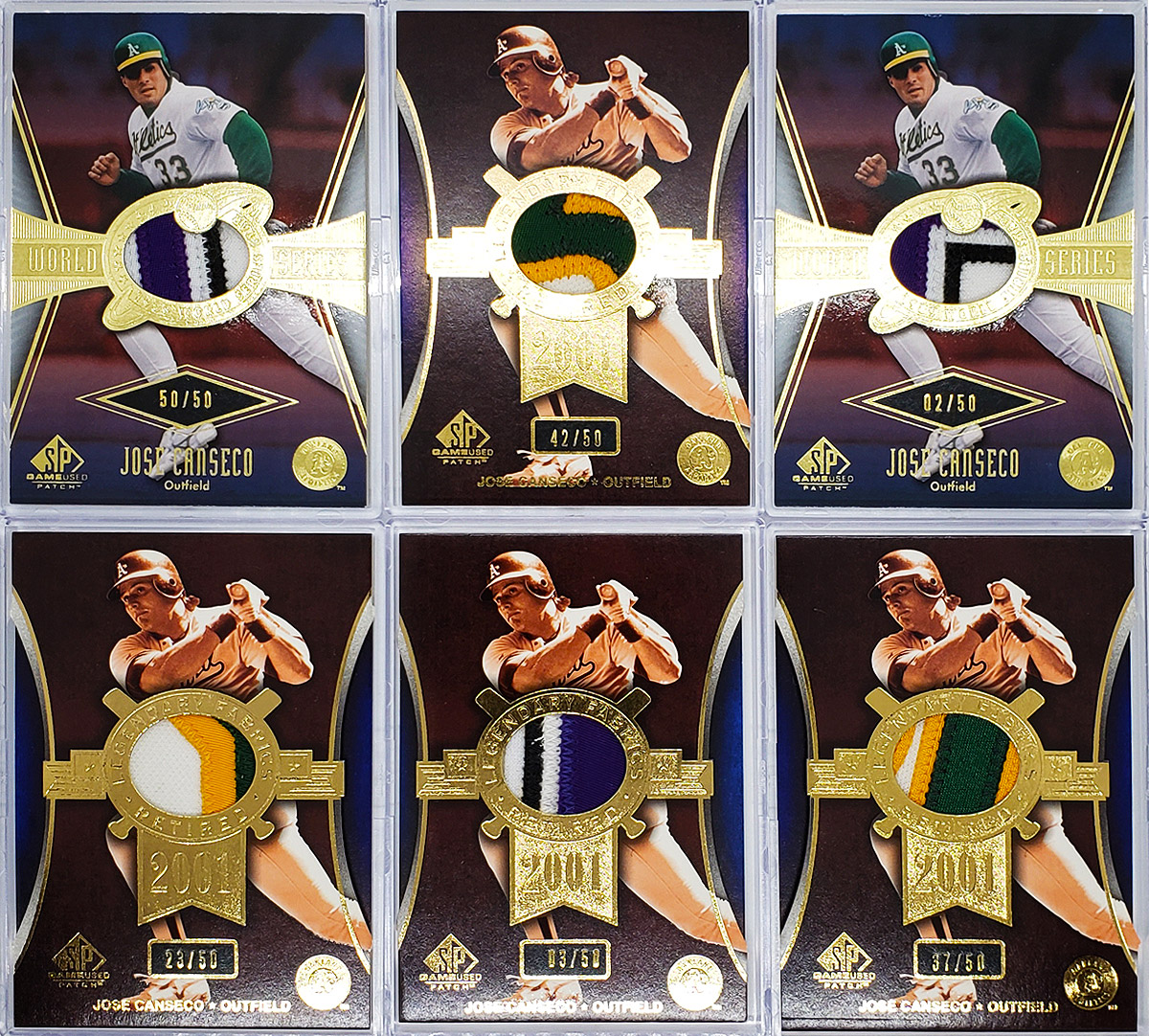 In the above picture, I have only kept one, and that is the 2nd one shown above.

Same here … I’ve only kept the middle one 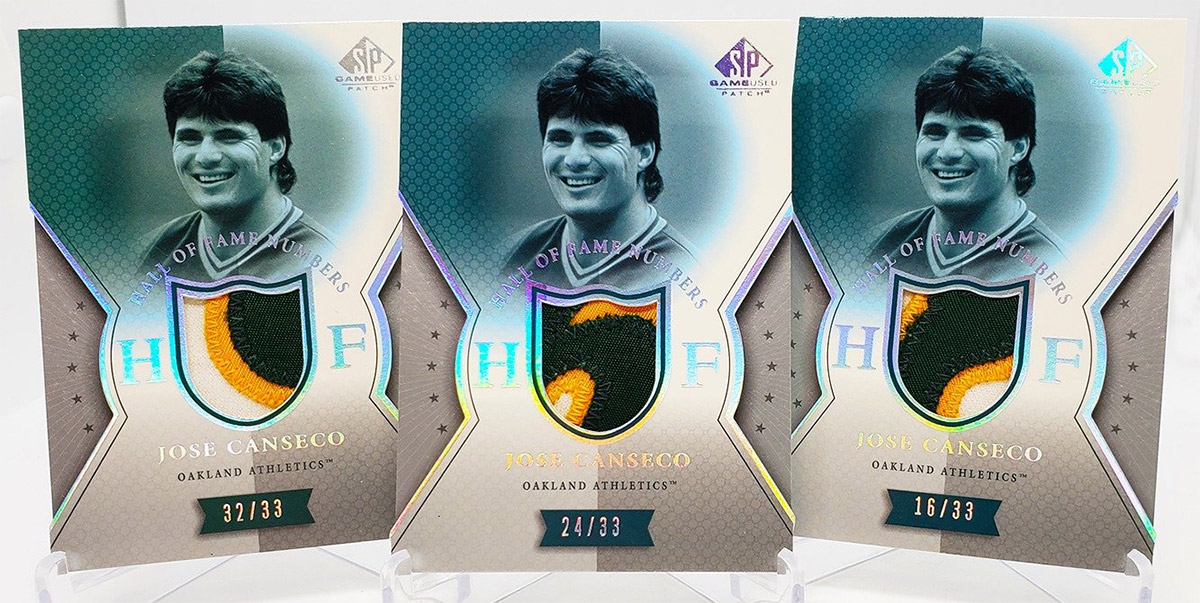 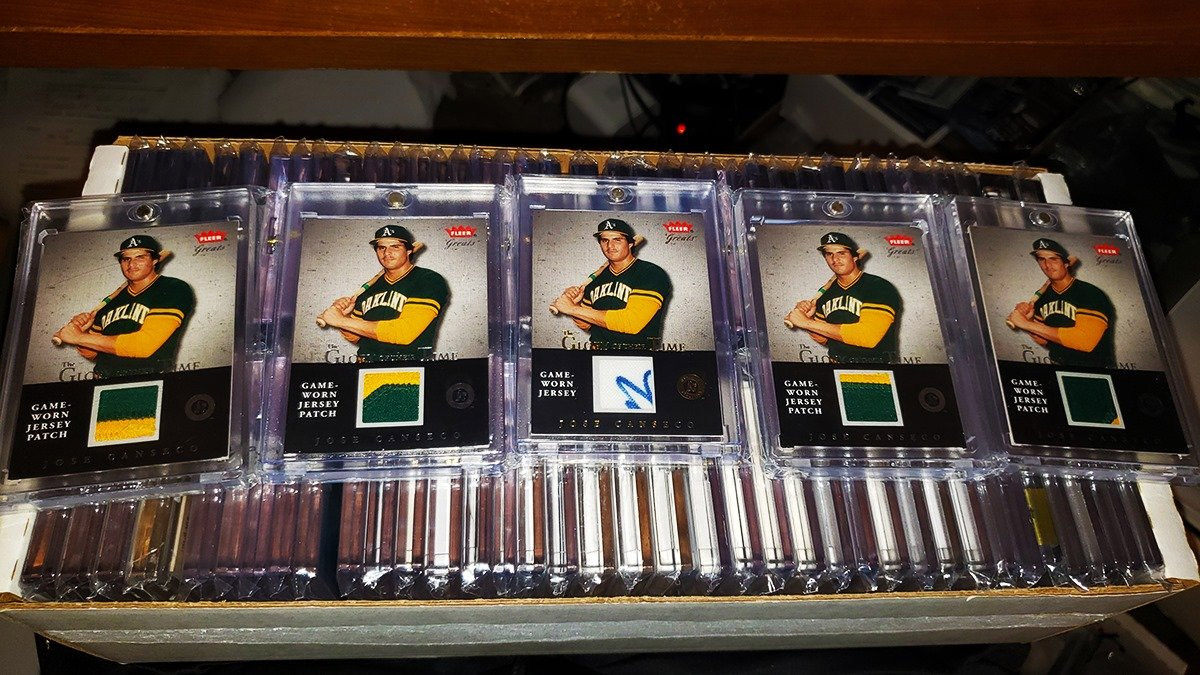 Even now, looking back at the pictures, at times, I miss having these beauties, but in the end, they are cards that end up in a box, not to be looked at.  But that’s when I realized that it is these very cards that were keeping me from doing something spectacular.

Did you know that every card in your collection that you don’t absolutely love is keeping you from doing something spectacular?  It’s true!  Think about it – if you are like most collectors, you could potentially have hundreds – or even thousands of dollars in cards that could be used to get something amazing!

Think about how much money you have wrapped up into cards that you rarely look at, and then think about what you would do with that money now.  Would you get a Babe Ruth? A Ty Cobb?  Much of this is doable for many, and that is exactly what I did.  I came to the realization that these boxes of Jose Canseco relics that I had multiples of and were sitting on my floor could be turned into something jaw dropping.  Like this Honus Wagner …

Or even this Shoeless Joe Jackson … 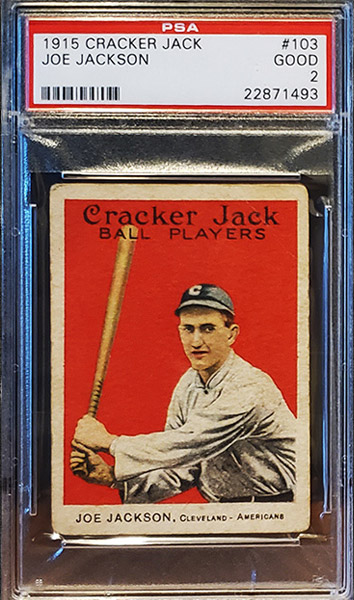 I would have never dreamed of getting these previously, and to be sure, I did have to buy and sell quite a bit to work up to these types of cards, but it all started with letting go of what I wasn’t in love with.

Every now and then, a rare Canseco card will pop up on eBay that I’ve never seen before, and before clicking “buy it now”, I have to step back and ask myself “is this something I’d buy as a supercollector, or as someone who truly loves this card?”  Many times, I find out that it simply wouldn’t make sense for me to buy, so I hold off!

By the way, that also freed me up to focus on Jose Canseco baseball cards I absolutely loved.  As it stands, I have a mere 165 Jose Canseco baseball cards, and truth be told, I could probably get rid of at least 15 more.  Psychologically, this has allowed me to appreciate what I have much more than when I had a lot.  It is no longer about quantity, but quality.  It also allows me to display my favorites!  They stand out, uninhibited by being surrounded by 10 other cards with different color foil.

Here are some of my favorite Canseco cards which are on display, and I literally look at every single day. 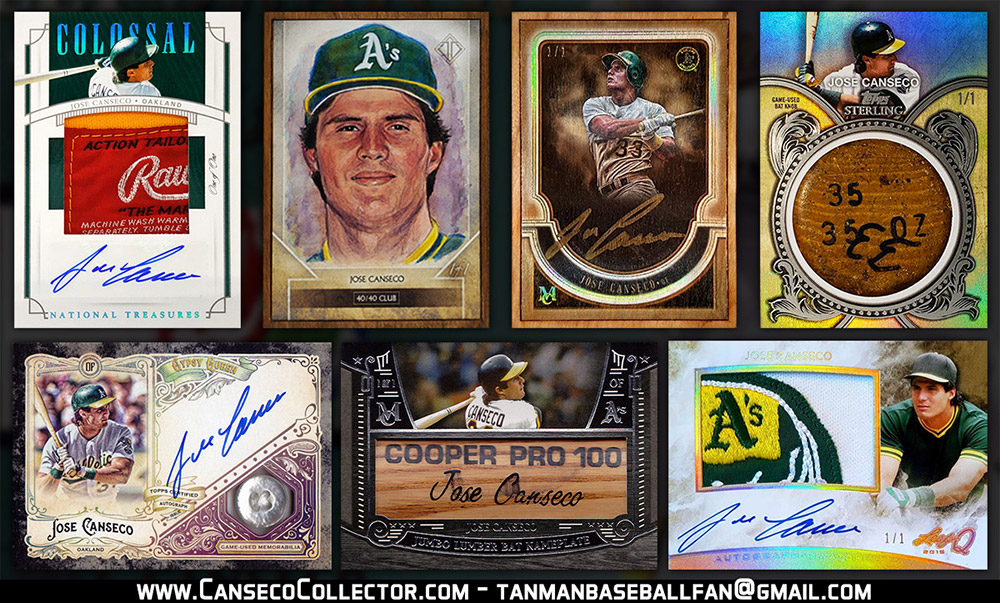 My vintage collection is also on the small side – I have less than 50 total cards.  But again, many of them are displayed, and I look at them every day. 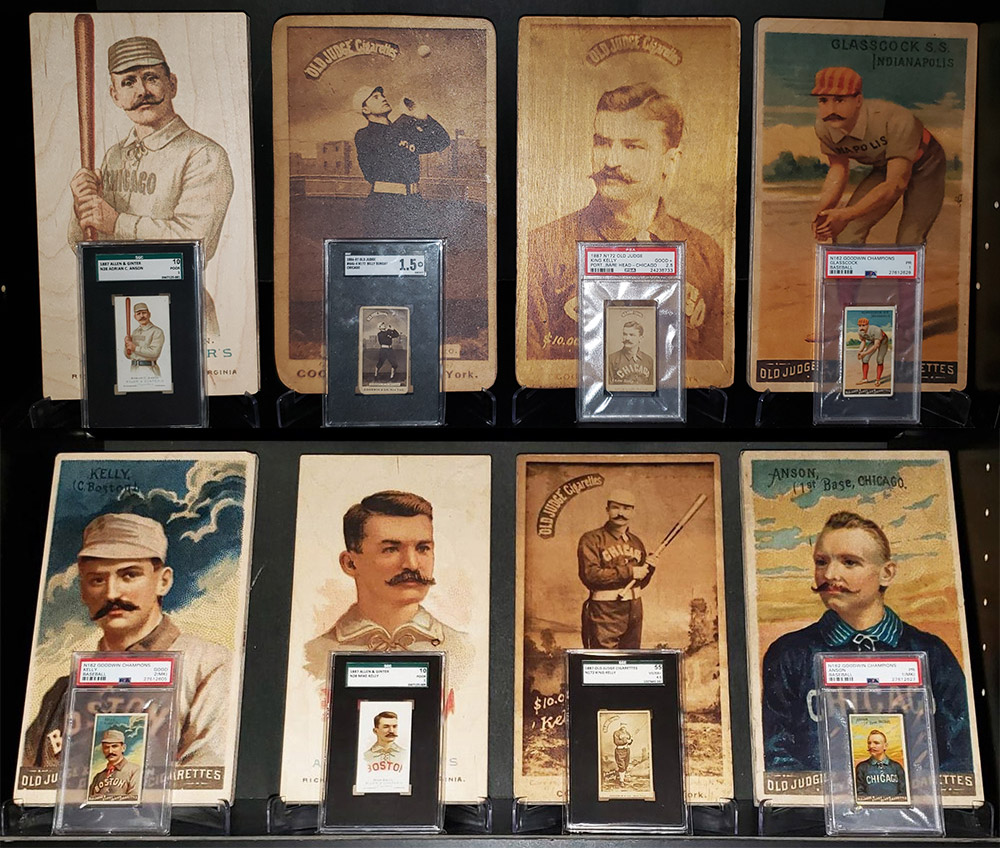 With all of the buying and selling I’ve done over the years, a lesson I’ve learned (for me, anyway) is that it is more satisfying to have a small group of cards that I never get tired of looking at instead of constantly trying to get everything just because I don’t have it.  Seriously – the cards I have displayed put a smile on my face every single day!  That can be you, too – you just have to figure out what your collecting voice is.

Everyone is different.  It is just a matter of finding out what you love, and how to collect in a way that makes the most sense for you – that might be going after a few select cards, or maybe it is diving into the crazy world of supercollecting.  In any event, I wish you the best in finding what brings you most joy.  Happy collecting!