The 1919-21 W514 issue is a set of cards that has always intrigued me.  There are a number of key cards, and fantastic stories!  Being that the set is now 100+ years old, it also feels like history.

Created right after World War 1, the simplistic artwork and low quality card stock serve as reminders of America dealing with the aftermath of WW1.

Due to their meteoric rise in price recently, I sold my W514 Shoeless Joe Jackson and Babe Ruth.  The money was great, but I was sad to see them go.  I caught wind of an auction house selling an entire set recently, and thanks to being privy to a number of private sales on these cards, and lack of big public sales, I was able to grab these cards at a fantastic price…

While I plan to mainly sell/trade much of it away, I wanted to walk through them a bit, tell some stories, and show some fun customs.

First, here is the entire set.  Gosh, I love the colors! 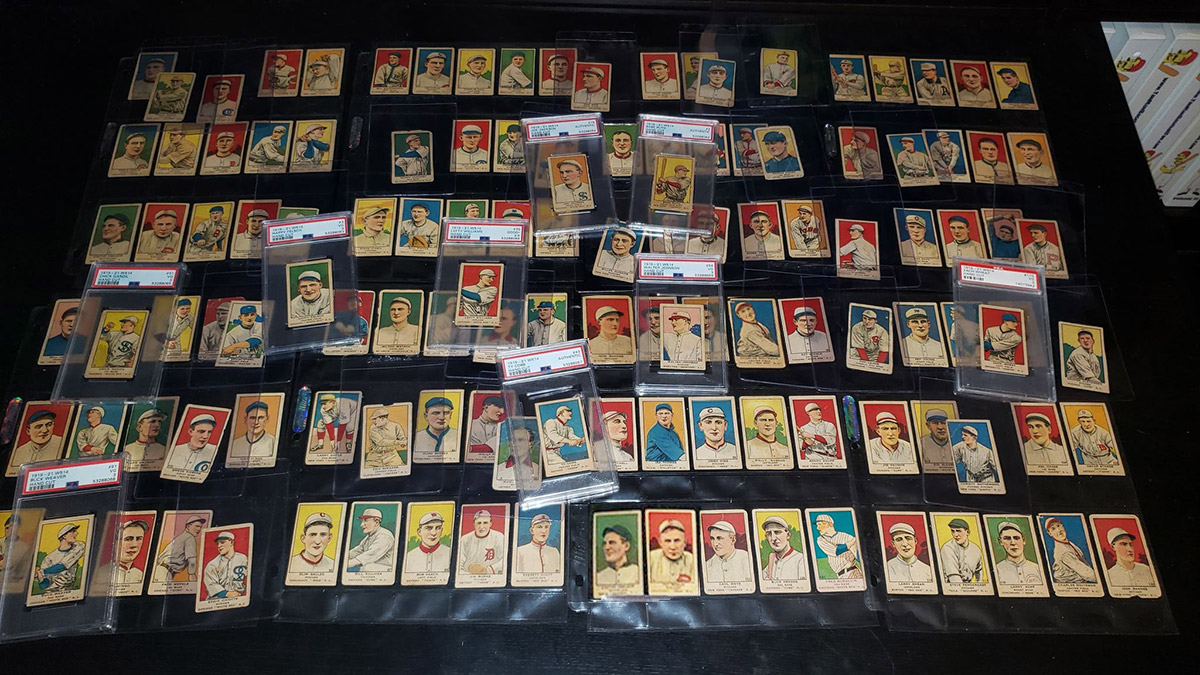 The PSA POP report shows the T206 set having over 250,000 submissions.  The W514 is sitting at just over 1% of that with a bit over 3,100 total having been graded.  Being that they were hand cut from strips at candy stores, about 40% of all W514s have been graded by PSA as “Authentic” as opposed to a numerical grade.  This is most likely due to the fact that many won’t meet the minimum size requirement for a numerical grade.  It is one of the very few sets that I personally don’t mind being graded as authentic.

I’ve written about the Babe before, but as a recap, here is what makes this one so special.  I like to call it the Curse of the Bambino card.  It features him as a member of the Red Sox, yet shows him as a member of the Yankees.  The bright yellow coloring is beautiful, and is really the driving factor for me to pick up the set!  I really missed it.  I have been fortunate enough to have owned three of these over the past few years, but this one presents the nicest.

A deep dive into the set showed me that these simplistic drawings aren’t just freehanded by someone from a century ago.  Many (all?) were actually modeled after photographs by the famous Charles Conlon!  The Babe Ruth below proves the artwork was modeled after a Red Sox photo.  This leads me to believe that the artwork may have been created before he was sold to the Yankees, while the card itself was produced after he was sold – it may even be his first Yankees card ever!

Nearly 10 years ago, Sports Collectors Daily identified this card as a potential breakout for being a solid investment.  It took a bit longer than people may have expected, but I’ve seen some recent sales eclipse some of his Goudey cards.

Here are some more Conlon photographs I decided to progressively superimpose with the W514s.  Here is Ty Cobb …

…and Christy Mathewson.   Mathewson served in World War 1 alongside Ty Cobb.  Mathewson was accidentally gassed during a chemical training exercise, and developed tuberculosis, which ended up killing him years later.

One of the more intriguing cards is the Shoeless Joe Jackson (more as to why later!)  I consider this his definitive Black Sox card.

All of the photos above were taken by Charles Conlon, so as someone on Net54 said, there seems to be some sort of a connection between the W514 set and Conlon.  Gahh, I have so much more to research … I LOVE this stuff!

Here are the Babe and Shoeless Joe sitting atop some other W514 cards.  Take a *CLOSE* look. 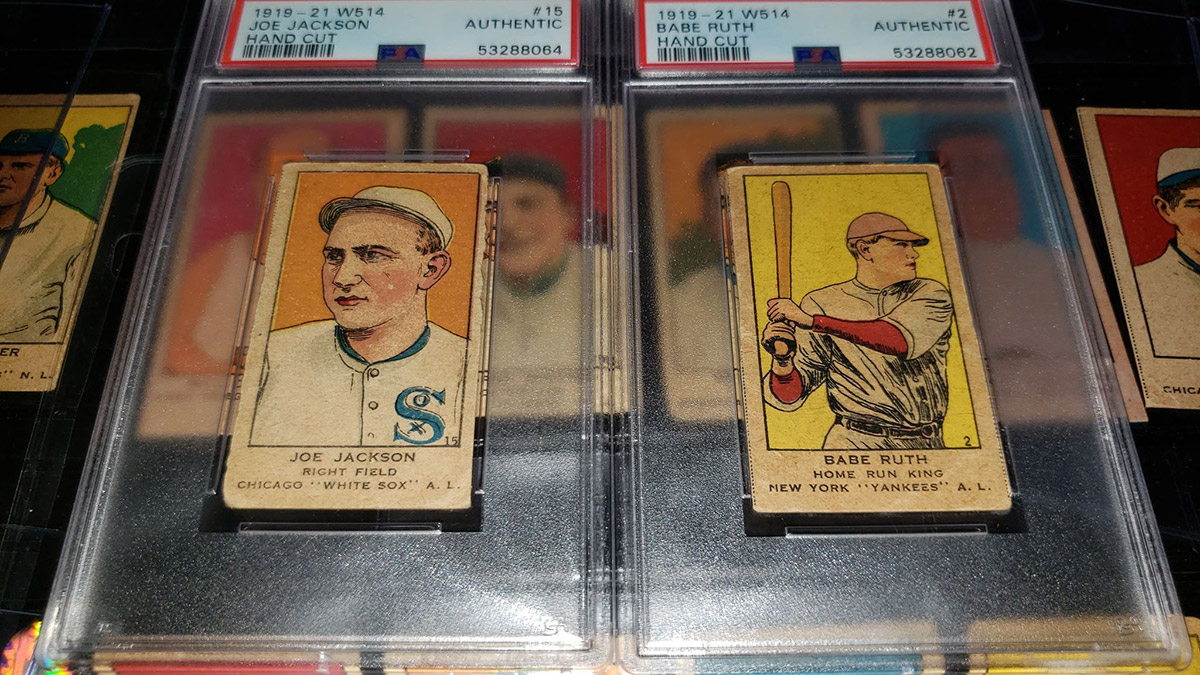 See anything odd in the background?  You might want to take a closer look this pic (I photoshopped the pic at the very top to hide some extra cards).  Look at some cards in the middle and bottom carefully. 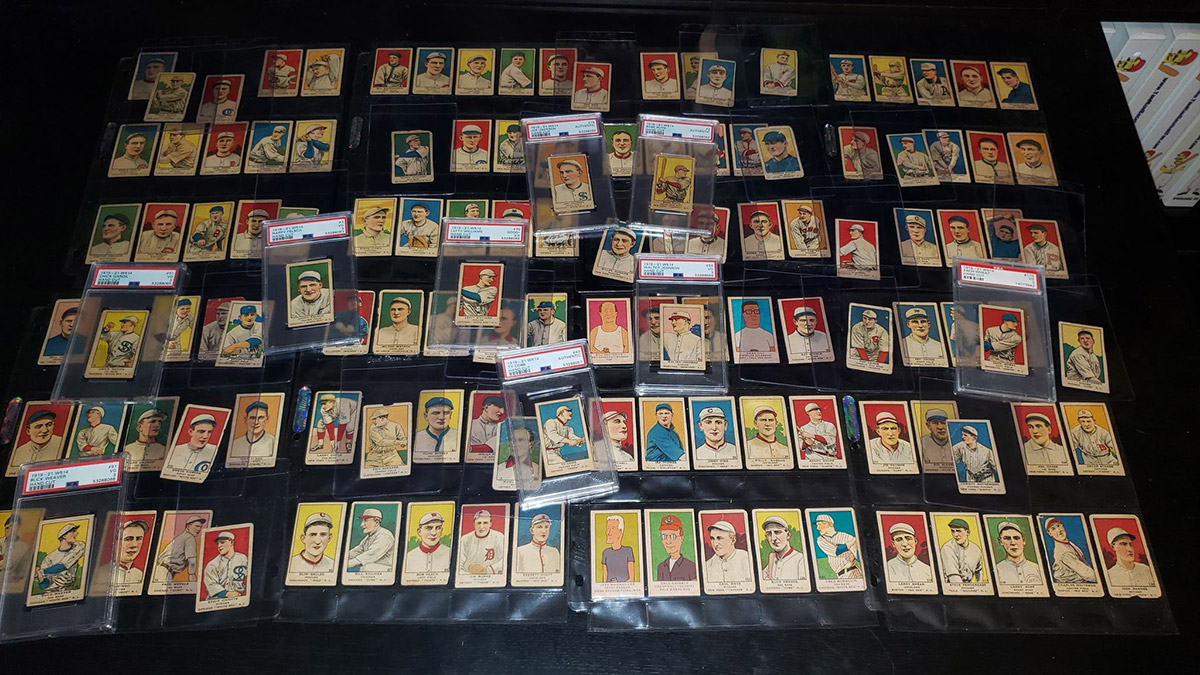 Give up? Here is an up close of one of the sheets! 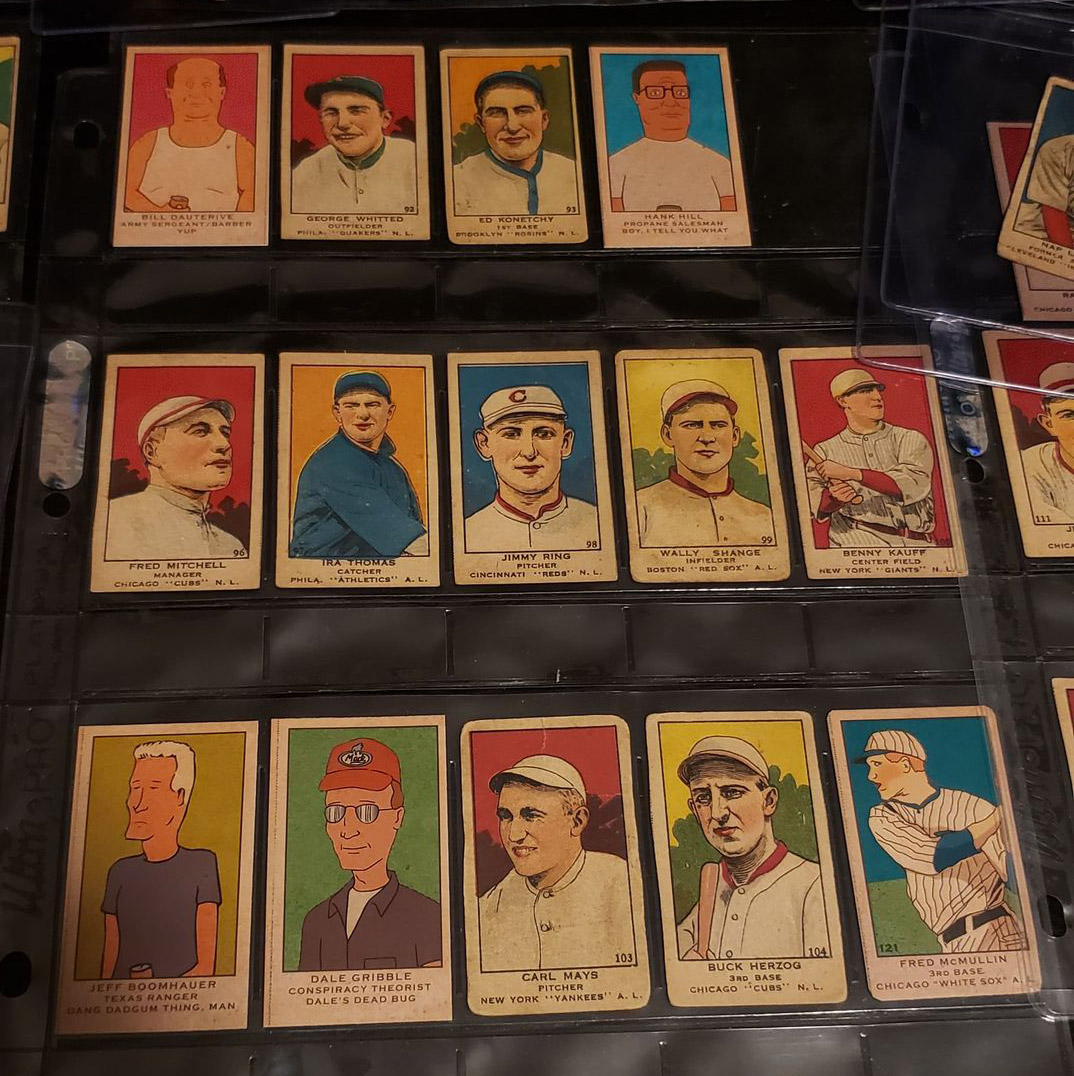 I couldn’t for the life of me shake how much the artwork reminded me of King of the Hill!  I couldn’t help it but make a card of the 4 guys in the style of a W514.  Here is a “strip” of them – just as the original W514s were produced over a century ago … ready to be cut from the strip at your local candy store!

And here they are as single cards …

I had a blast creating these, but I wasn’t done yet!

One of the more notable things about the W514 set is that it features 7 of the 8 Black Sox (Eight Men Out) players.  Shoeless Joe Jackson, Swede Risberg, Chick Gandil, Lefty Williams, Ed Cicotte, Happy Felsch, and Buck Weaver.  This makes it *the* set for Black Sox collectors.  So many have mourned the fact that the W514 set didn’t include Fred McMullin.  He never had a W514 … until now.

Look at the sheet I showed you earlier.  The King of the Hill guys weren’t the only customs on the sheet. 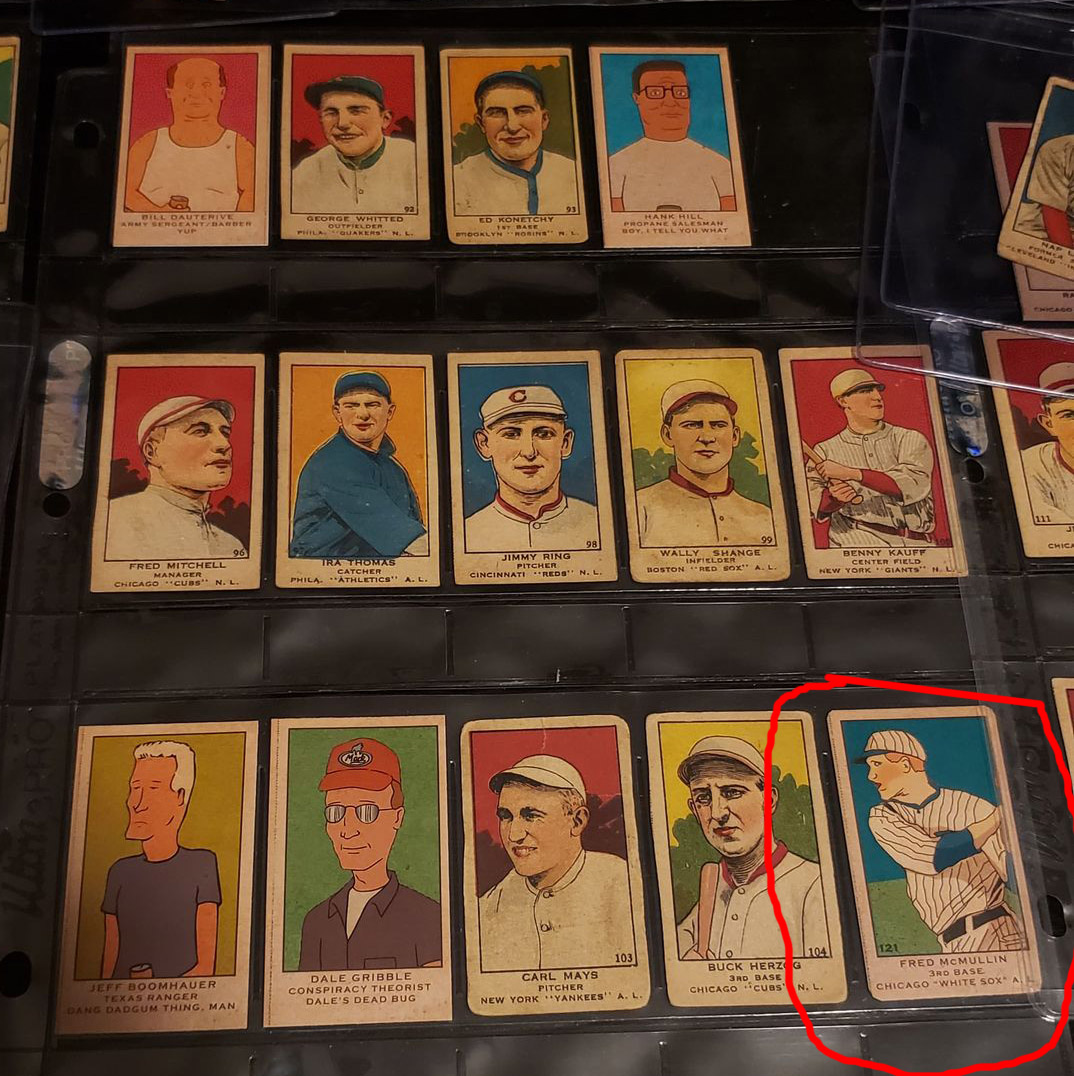 I searched for a Charles Conlon photo of him, and found one!  From there, I used what I learned in reverse engineering the other cards in the set, and drew my own W514 style McMullin – complete with blush and red lips!

A close up of the artwork that I drew: 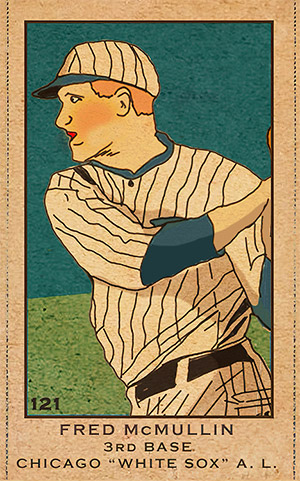 and here it is as a “real” card.  To be more authentic, I printed the cut marks, and used scissors, just like kids would do a century ago. 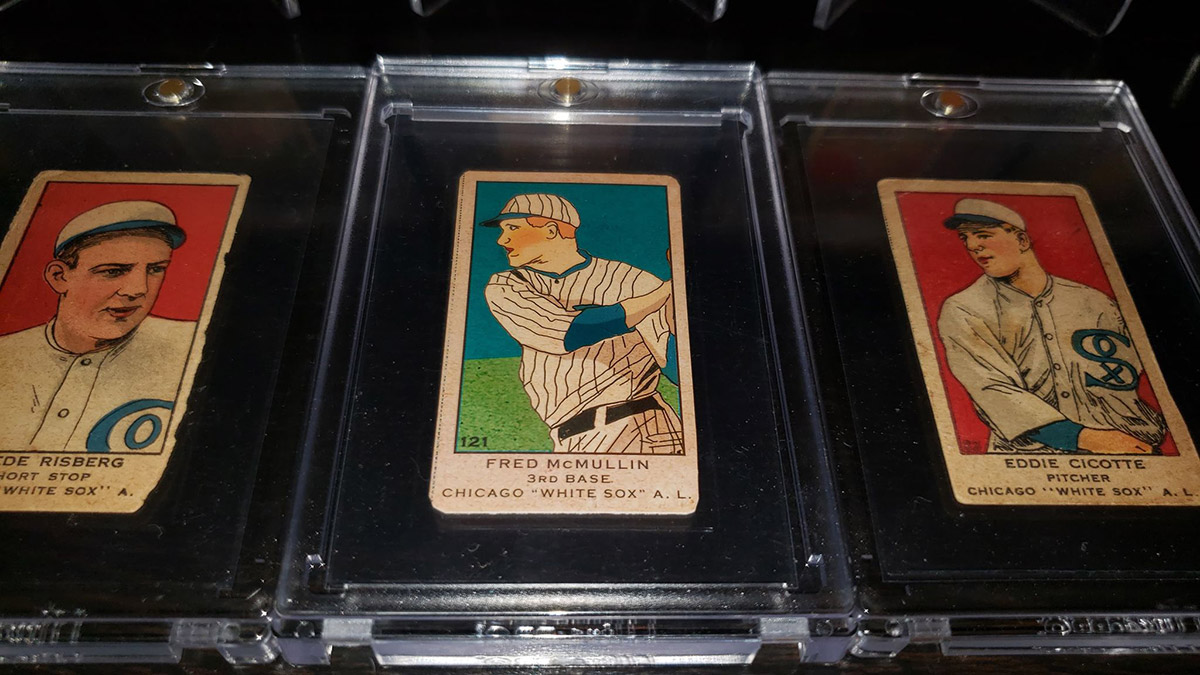 Some super rare W514s show up online with advertisements on the back.  Because of this, I decided to make an advertisement for my custom McMullin: 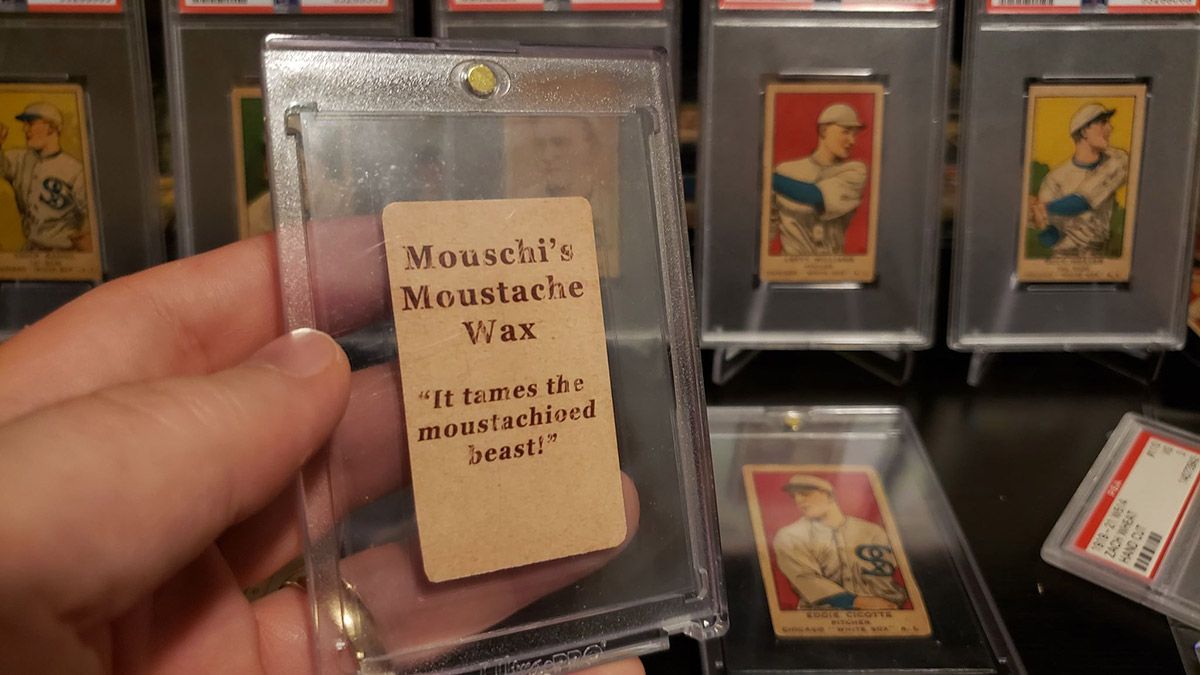 With the McMullin created, I’m happy to present to you the complete the ultimate Black Sox set! 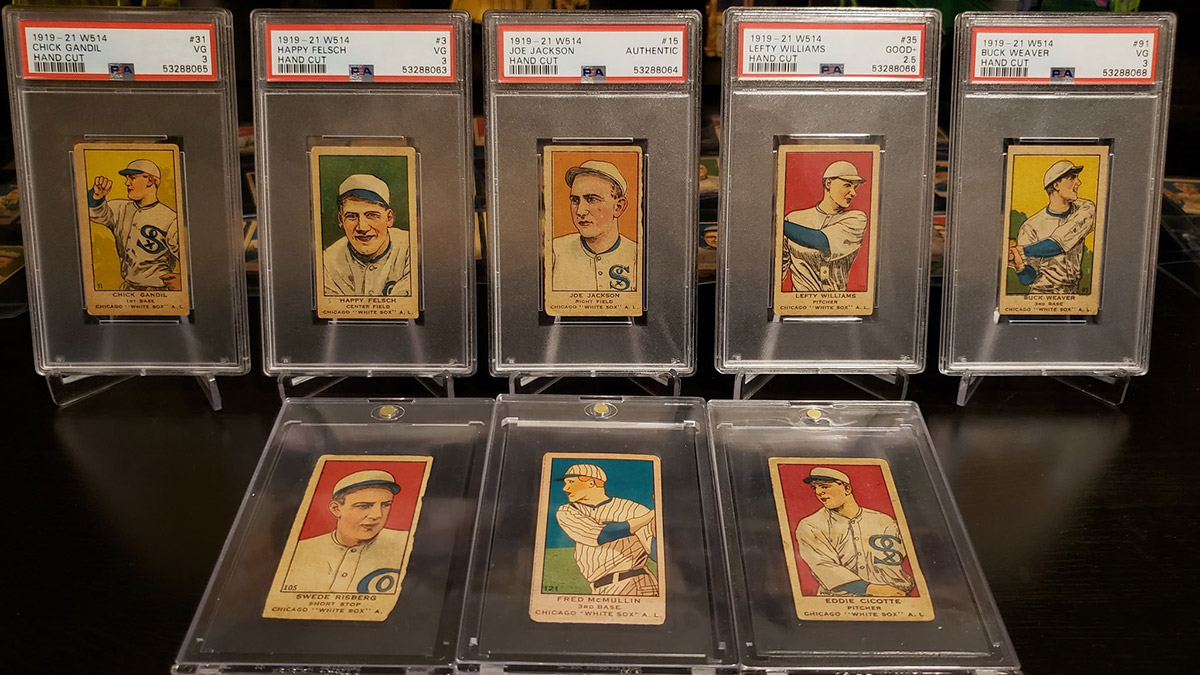 I could probably write a book about this set if I continued to dive in even more, and while it may not stick around here for long (I’m still debating on what to sell/trade/etc – my wife actually thinks I should keep it for a while!) I’m happy to have this for now.  The mysteries and history associated with these cards make them all that much more appealing! 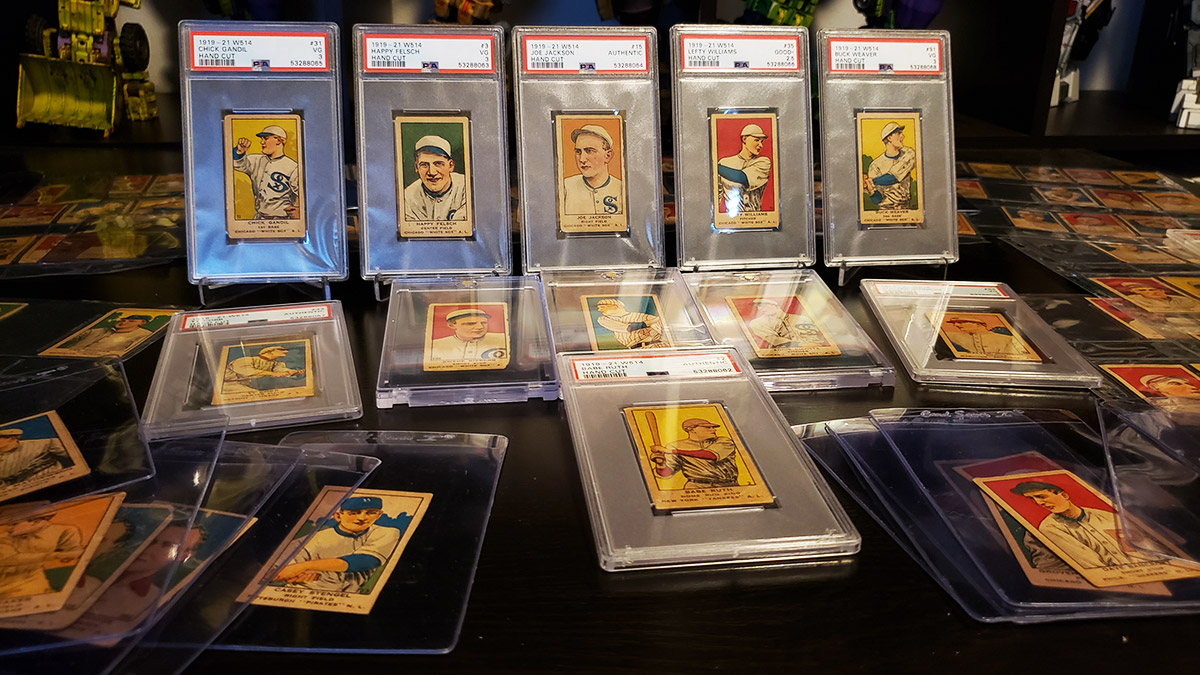