A Boy and His Collection – A Parable

Here is a parable that I wrote!  I draw this partially from personal experience, but think and hope you all can connect with this too.

Listen to the audio version here! 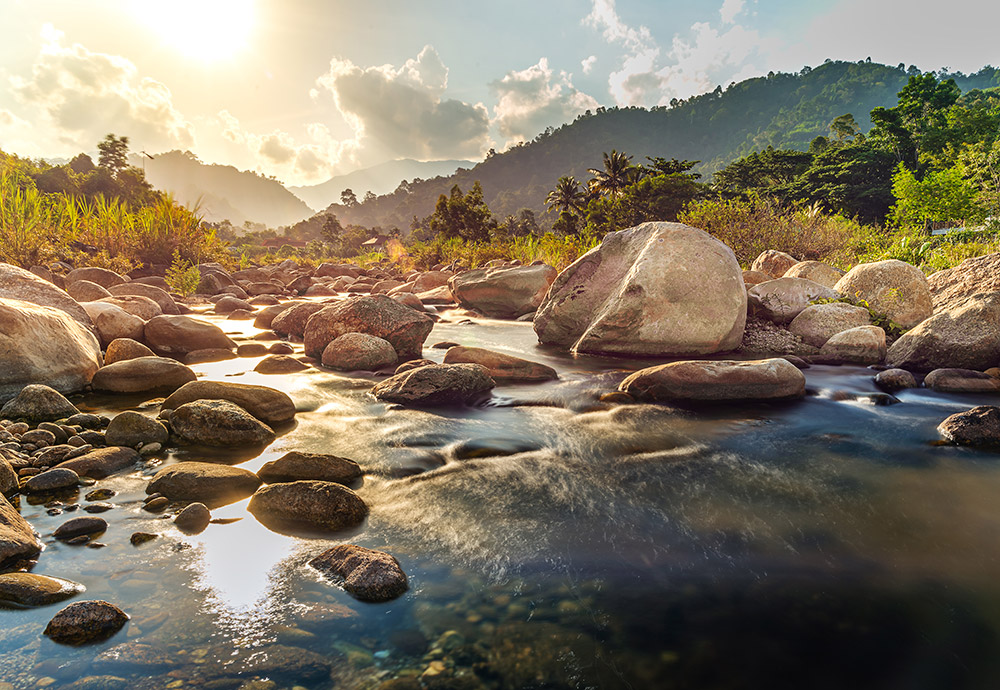 Let me tell you a story of a little boy who went exploring with his family in the woods.

Once upon a time, a family took a trip to go hiking in the woods.  They happened upon a stream of cold, crystal clear water.  The little boy was fascinated by the shallow stream, and crouched down to get a better look at the bed of the stream.  What he saw captivated him.

Among the silt, he found several smooth stones with extremely beautiful coloring.  While various colors were represented, the bright blue ones were his favorite.  He picked one up and held it to the sun, with the light glistening off of its wet surface.  “I’m going to keep this one!” he said.  As he put it in his pocket, he looked around, and found there were more pretty blue stones.  The more he looked, the more he found.  Eventually, every one of his pockets were filled with treasures – not just blue stones, but of all colors – if it caught his eye, he stashed it away.  His affections were fully given to the stream that yielded so many priceless artifacts.

When his family called for him so they could go back home, he was ordered to empty his pockets, but could keep a couple of his favorites, so he did, though begrudgingly so.  While he was not happy he had to leave most of his newfound collection behind, he was enamored by what he kept, and made plans to visit this same stream in the future.  When they got home, he proudly displayed his prizes on his shelf.  The little boy got a taste of what it was like to collect something that he loved – completely unencumbered by value, or what others thought of them.  He found something he truly loved.

The boy proudly showed his friends and family his meager collection.  His uncle saw his enthusiasm, so he showed him some pieces of his collection. Some stones were translucent, while others looked like they could glow.  The little boy quickly found out that these gems were worth a small fortune to him, and were out of reach, given his allowance.  Still, he was thankful for what he had, but awoke to the realization that there were other much grander artifacts to be had.  He knew he had a LOT of car washing gigs to land in order to add some truly special pieces to his collection.

As the years went by, the little boy grew up, and his prized stones gathered dust.  He never did get a chance to collect any stones that were like what was in his uncle’s collection.  The beauty of the stones he collected that once captivated him was now stricken by years of dust and familiarity.  The stones eventually found themselves in a drawer, then a box, not to be seen again until he moved to his first house with his wife and child.  As he was unpacking, he removed the now musty stones and looked at them thoughtfully, letting nostalgia rush over him.  He hadn’t laid his eyes on them for years at this point.

The now-grown man held in his hand the prizes of his childhood, and in his heart, the feelings of excitement just as he had when he first found them.  A quick search online made him come to the realization that the stones he found as a child were as plentiful as they were cheap, and would not be a worthy endeavor to purchase more of.  He might as well go to the same stream he visited as a child and fill his now adult-sized pockets.  Doing so wouldn’t scratch the itch, though.  So, what could satisfy his nostalgia fueled hunt?  Perhaps he could find some that were similar, but beautifully polished…perfect specimens.  Stones that were worthy of his time to hunt. Stones that were rare and valuable – like the gems that his uncle showed him as a child.  Perhaps that would quench his nostalgic thirst.  He did, after all, have much more expendable income than he did when he washed neighborhood cars as a child.

Armed with an adult sized wallet, the man took to the Internet to satiate his collecting cravings.  He was on the hunt for stones to not just capture his excitement again, but to also impress others, and ultimately, to somehow impress his inner child – the ten year old version of himself.

Over the next several days, weeks, months, and years, he went from discovering what was out there, to researching, to participating in various auctions.  He lost many, and won many as well.  With each purchase, his appetite grew for something more and more awe-inspiring.  Unbeknownst to him, he was constantly trying to get the best of the best, leaving nostalgia in the dust – his purchases, after all, no longer had any ties to his childhood.

Slowly but surely, the man’s room became filled with precious stones, and rare gems from around the world.  Many had fascinating stories attached to them, and some were one of a kind.  Some were purchased online, while others, he had to travel great distances to acquire.  His friends and family dubbed his office the Rock Kingdom.  Visitors were awed by the beautiful display, though, felt the man had a clear obsession.  Friends and family saw it as a strange quirk at best, while those within the stone and gem collecting community gave him high praise that armed him all the validation and justification necessary to continue growing his collection.

Nothing could quite compare to the rush of being at the precipice of acquiring a new, rare piece.  Not even the satisfaction of actually owning it!  In fact, the more his collection grew, the more he realized that he was simply unimpressed with each new piece being added to his collection.  It became more of a sense of duty than joy.  Rarely did he even crack a smile when a new piece came in.  The man would look at each new acquisition for a moment, then put it in a box, or on a shelf, rarely to be enjoyed again.  Any and all joy would be shifted into anticipation of what new gem was around the corner.

On a night that was no different than any other, the man had an epiphany.  With his family fast asleep, he was in his office, spending countless hours searching and searching for the next piece to add to his collection.  He leaned back in his chair to stretch, and looked away to give his eyes a rest from the glow of the monitor.  As he did, he looked around his rock kingdom, and had a moment of introspection.  His prizes were gathering dust, and lost their luster.  It is the first time he came to the realization that they weren’t exciting to him any longer.  They were just background noise.  Background noise that was costing him a lot of money, and more importantly, a lot of time.

“The more pieces I acquire, the less special everything becomes, yet the more entrenched I am in my obsession.” he said to himself.

In a moment of clarity, he gathered all of his precious stones and gems, and placed them all on a table.  He was amazed at how much beauty was hidden beneath the layers of dust that had accumulated on them, and how apathetic he was toward each piece.  “Every single one of these would have caused my jaw to drop as a child” he thought to himself.  Why is it that he didn’t get excited to look at each piece as he once did, yet it made him sick to his stomach to stop his obsessive collecting, and sell his collection?

That very night, at the very table that now held all of his treasures, the man made a decision to separate his collection into a pile that he could sell, a pile that wouldn’t be worth selling, and a pile to keep.  After several hours, he emerged with a game plan.  He listed most of his valuable pieces for sale, which, in an instant, helped him to emotionally detach.  It was strangely freeing, like a huge weight was taken off his shoulders that he didn’t even know was there.  As he awaited for them to sell, he placed them all in a box in his closet, and took the ten or so he decided to keep, polished them up, and displayed them proudly.  Many of his keepers had very little monetary value, yet they still proved to be his favorites.

He was amazed at how excited and thankful he was to own the ten he decided to keep!  It was as if they were brand new to him.  He looked at them and smiled, saying to himself “less truly is more!”  Now that all of his emotional energy wasn’t tied up into finding the next new shiny thing, he could truly appreciate what he had.

After all of his other valuable precious stones and gems sold, he still had one box left: The box of rocks that didn’t hold much value at all.  “I know what I’ll do with these” said the man.  That weekend, he brought the box of rocks to the stream that he visited as a child, and one by one, tossed them into the clear water, which cleansed each piece of dust, restoring them to their original luster before sinking to the bottom.

When the man was finished, he took a step back and admired God’s creation.  He looked back down at the stream, and was amazed that his once prized collection was among so many other stones that were just as beautiful.  He breathed a sigh of relief, realizing that there was no more urgency.  No more fear of missing out.  No anxiety about losing to someone else.  He smiled at the stream and realized if he ever wanted any more beautiful stones, all he had to do was dip his hand in the water, and pick them up from the stream.

Just then, he heard a little boy running to the stream ahead of his parents.  “Mom!  Dad! Look at all these cool stones!”  The boy picked one up from the stream and held it to the sun, with the light glistening off of its wet surface.  “I’m going to keep this one!” he said, while putting it in his pocket, and continued to search for more.  The man smiled, picked up another smooth stone himself, put it in his pocket and went back home.