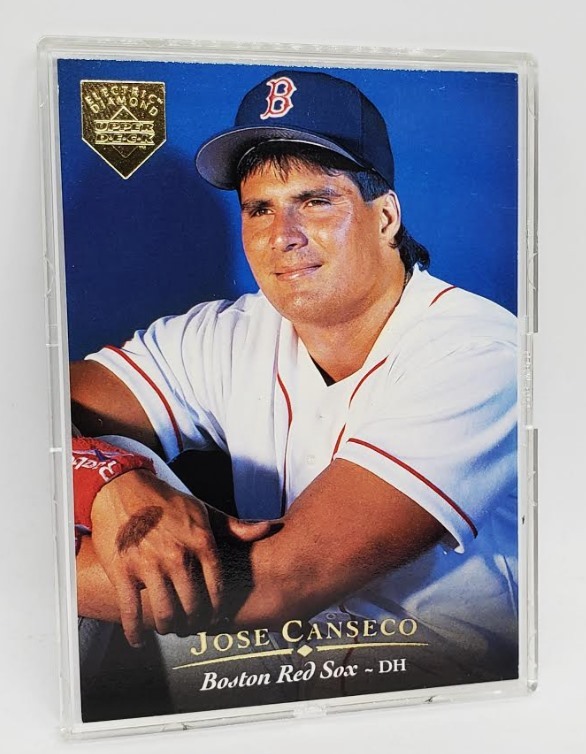 Did you know that the Alan Trammell version of this sold for over $400 the other day? Heck, Kent Merker went for $22!

1995 Upper Deck Electric Diamond Gold – This set was sold in 2 series. Series 2 is harder to find, but series 1 isn’t exactly a cakewalk.  Canseco is in series 1, and doesn’t show up often, but isn’t as tough as these series 2 cards.

This is a card that I never thought much of until researching this set. The wild thing about it is the Electric Diamond Gold cards are stated to have fallen at 1 every 35 packs for both series 1 and 2 retail. That means that you could statistically expect this Canseco to be pulled at a rate of 1 every 218.75 boxes.

So why is series 2 so tough?  Let’s dive in – who doesn’t love a good mystery?

There are a few possibilities.  Here are some I can think of:

With the strike having put a damper on the 1994 season, perhaps Upper Deck already had 1995 series 1 ready to go (remember, baseball cards were exploding pre-strike!)  With poor sales, it is possible that they severely cut production of series 2, meaning they still fell at 1 per 35 retail packs, but there just weren’t as many packs made.

A counter argument to this is that sales data actually shows there are more series 2 retail boxes having been sold in the past than series 1!

Another possibility is the production numbers were similar, but no one was buying them because people left the hobby in droves, and were more interested in other things, come mid/late 1995.

The retail product was likely distributed to places such as Wal Mart, Walgreens, etc.  The unsold product may have either been thrown out, or found their way into garages & storage units throughout America.  The problem?  These cards are UV coated, so any significant amount of time stored in heat will cause them to “brick” – that is, get stuck together, causing them to be worthless, and then thrown out.

Player collectors are a funny breed.  We can have a card on our want list for years – even decades – and the longer time goes bye, the more likely that card hits grail status.  If you have 2 or 3 Trammell (or any player collector) guys with this card on their want list since 1995, you can expect fireworks.

Some people may wonder why Trammell might sell higher than Barry Bonds, Chipper Jones, and Cal Ripken Jr.  They are all, after all, in Series 2.

The reason is likely due to notoriety. If you buy a collection and see an Electric Diamond Gold Barry Bonds, you are much more likely to list it for sale than you would an Alan Trammell.  As a result, more Bonds come to market, satisfying the big spenders.  There have been far more of superstar players to have come to market than the minor stars.  Think about this scenario for a second:

Let’s say a child pulls one from a pack in 1995.  He puts it in his closet, and it stays there until after he moves out of his parent’s house.  Mom & dad give him the ultimatum 15 years later:  pick up your cards or we are giving them to Goodwill!  They are dropped off, and picked up by a collector within a year.  He pulls out any good cards he wants to keep, and gives the rest to his nephew.  Rinse & repeat.  This is one of countless scenarios where a card that may not look or seem all that special may be lost in a sea of cardboard.  I’ve seen and heard of many stockpiles where it would be a physical impossibility for any one person to go through in their lifetime.  You never know what is lost out there.

Couple that with the above mentioned issue of bricking, it can truly make a card with a print run of 100 seem like a print run of 5-10. That’s why low print run cards without a serial number can be among the most difficult to track down.  That is also one of the reasons why I love this hobby so much.  It is a never ending treasure hunt!