Showing off Customs & Cards While our AC is Busted

Greetings from mission control – where the lights are off, and game 2 of the ALCS is blaring so I can hear it above the 2 fans pointed at me.  The ALDS nearly killed me.  When you spend the first 12 years of your life as an A’s fan in California, but have 28 years of Houston life under your belt, it is confusing who to root for.  This totally describes me last week. 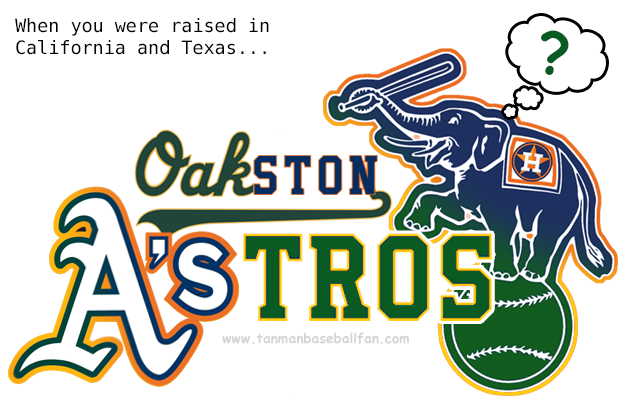 I was sad the A’s lost, but it was a REALLY entertaining series.  The sheer amount of bombs hit makes me wonder if the playoff balls are juiced.  As you know, the Astros have advanced, so that means I’m going for the black sheep of baseball to win it all.  It is a really weird position for me to be as a fan, but … hometown, right?

So, why is the game blaring above the noise of two fans?  In the midst of us waiting for a new fence, our air conditioner went out.  For those of you up north, that may not be a big deal, but to us southerners, it is.  Check this out from a couple days ago.  I may or may not have thrown this pic in to rant at the home warranty company.

We have been waiting for quite a while for the home warranty company to get back to us.  The account manager ignored me, and the company itself was requiring a model # and serial # of my unit to do ANYTHING, which had been worn off with time.  I researched for hours to get the information, and even went door to door to my neighbors in hopes of them having similar information.  We waited for a week (thankfully, we have a few portable a/c units which made everything comfy in the rooms my family occupied), only to find out the home warranty company was going to pay a whopping $200.

It is funny how they are ultra responsive to get you to sign up, but when you need them, they are nowhere to be found.  I kicked them to the curb, and got my own guy.  We are hopeful by this time tomorrow, we will have a new a/c installed.  I am seriously thinking about cranking it down to levels where we can see our breath for a week!

In the midst of all of this, I’ve been having an absolute blast taking pictures of my collection, memeing, (is that a word?), and sharing customs I’ve done both past and present.  I thought I’d share a few here, since I haven’t been posting a whole lot on the forums recently. 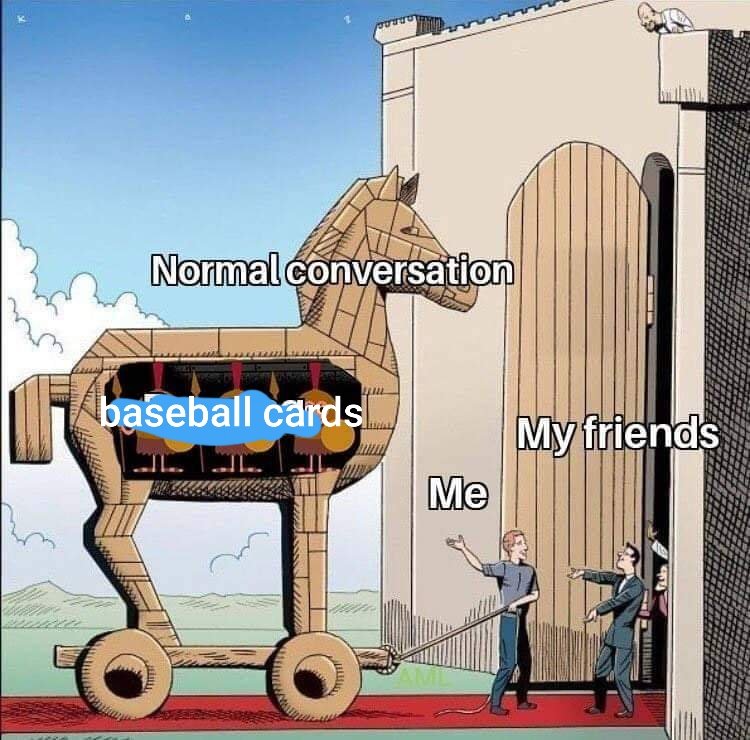 Years back, I decided to do a 90s style card and call it “Big Man on the Field” with wild colors, an even wilder font, and a crazy die cut.  I also did a version of it with white space for Jose to sign, which he did when I was at his house.  Aesthetically, I think I like the non-auto better by just a bit. 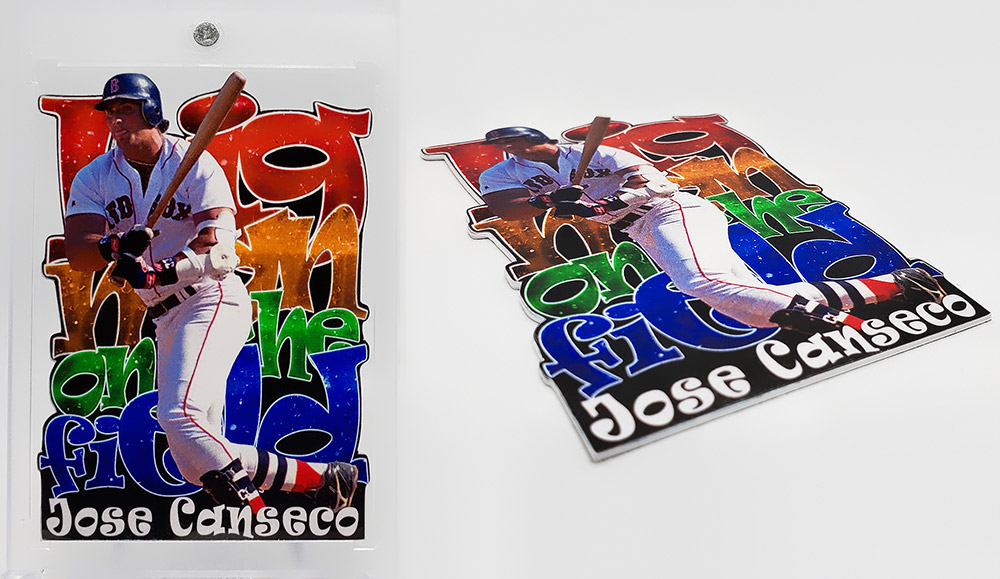 How about a rocker relic with guitar pick?  August Burns Red guitarist J.B. Brubaker reached out out me quite a while ago to create these so they could be signed.  If memory serves, he did these for some fans.  (Guys, check ABR out!) 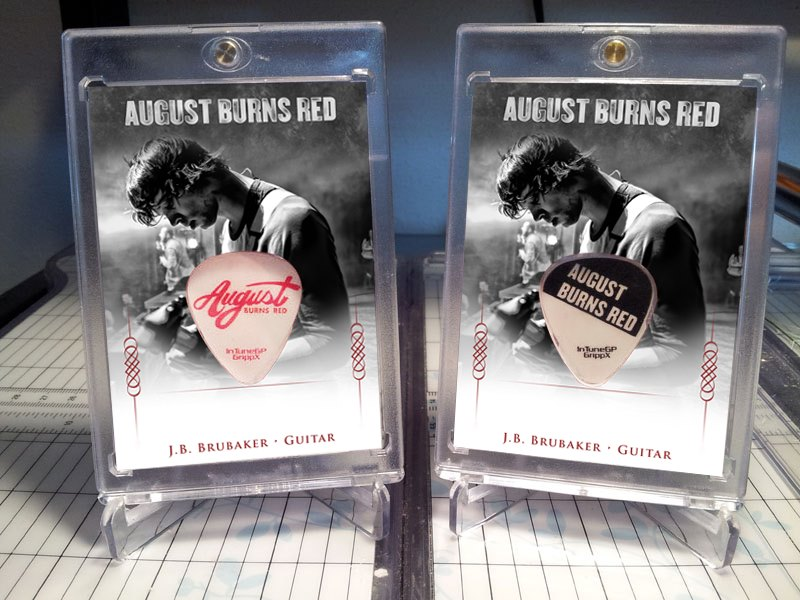 Recently, a fan of Dave Kingman had a run of 10 years worth of television used photo slides, and wanted me to create a custom set of the slides embedded in jumbo cards.  Here they are – one for each year from 1976 to 1985.  You can see right through each slide in the middle. 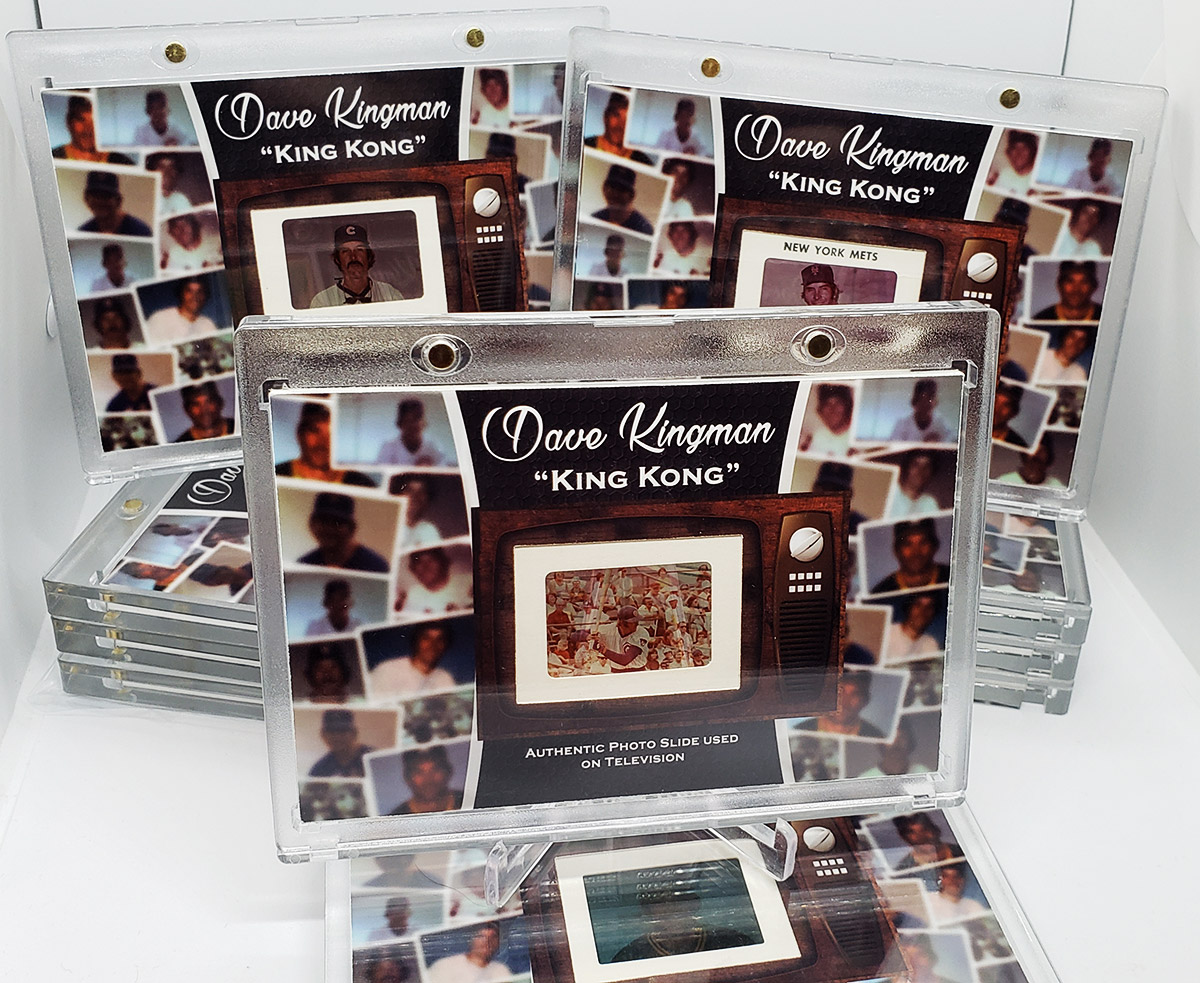 Luis Jr. had he & his dad sign a bunch of pieces of paper, and sent them to me along with jerseys they wore in games.  Daddy Feliciano didn’t know what was brewing – what he didn’t know was I was creating two father-son booklets for them, thanks to Luis Jr. commissioning me to do so. 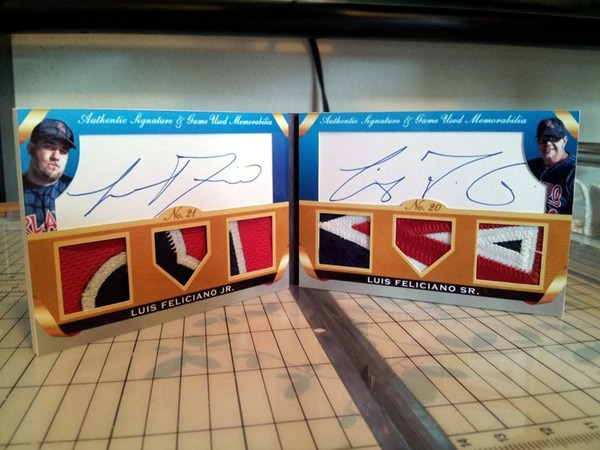 He sent me this picture of he and his father enjoying them.  If you are commissioning me to do a gift, please send me pics like this – it makes my day! 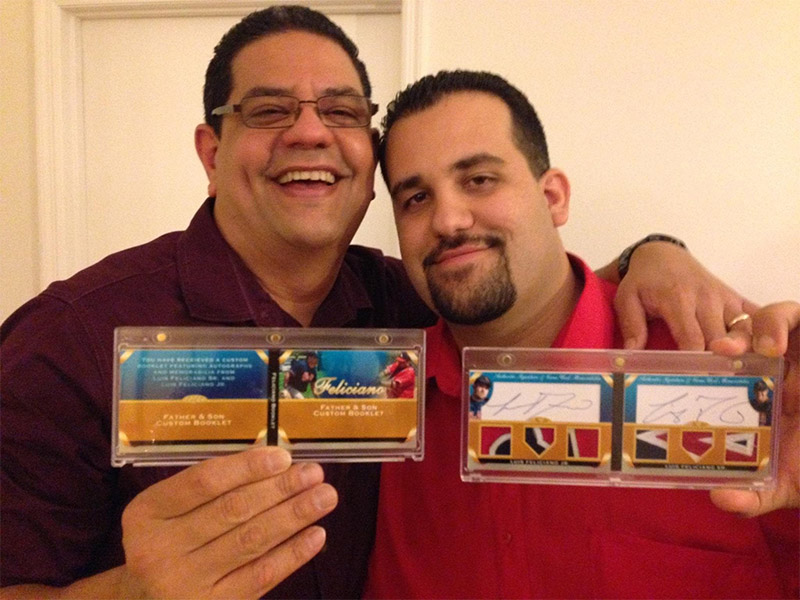 When I was at Jose’s house, I had him sign a number of times on a specialized type of black textured paper, in silver and gold ink.  I wasn’t sure what I was going to use them for, but finally figured something out a couple years later.  This is a card I call “Behind the Plate” (because the pic was taken behind the plate).  I posted a short video of it on Twitter to show the refractive properties – the entire thing, minus the signature and black area looks like it glows! 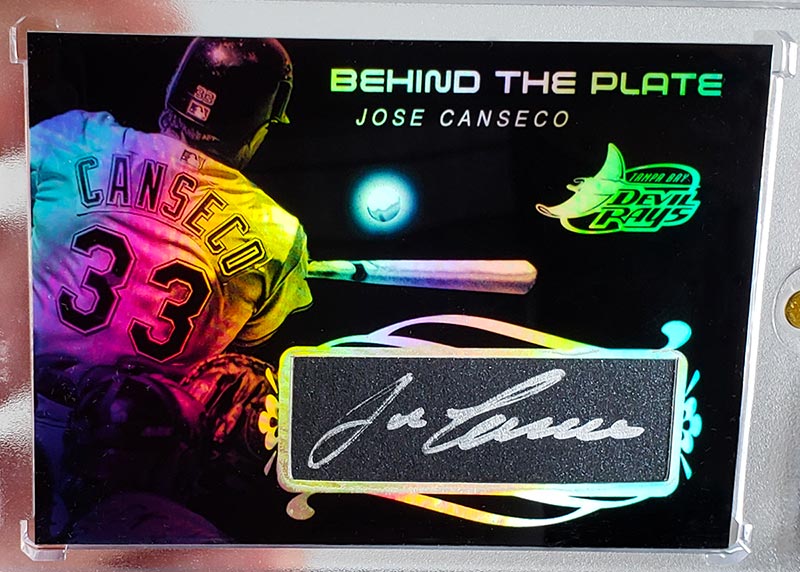 Topps did some amazing work with Gypsy Queen baseball cards, but Jose didn’t have one.  I decided to create one myself, utilizing a signed baseball that was used in a game that Jose played in.  I amped up the design a bit and here is what I came up with! 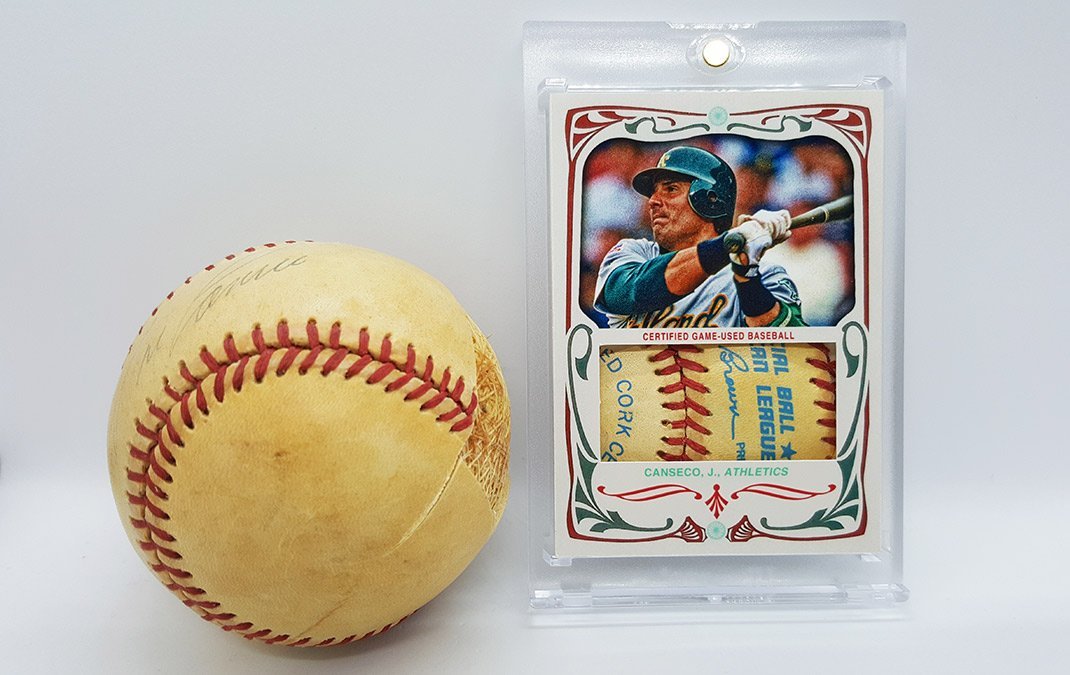 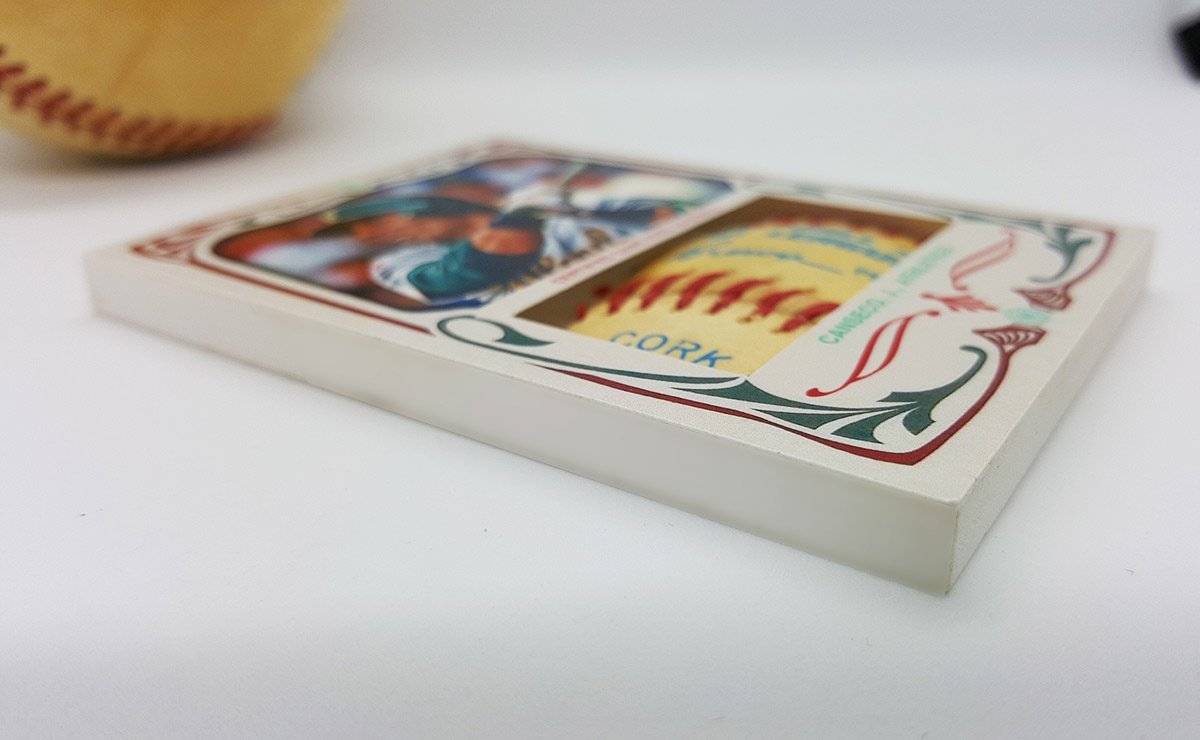 Last but not least, I recently created this as part of a trade deal for a friend of mine as an anniversary gift.  It is a jumbo that features a number of “game used” relics from their wedding!  This last piece really ignited me going again on customs – a TON of people reached out to me to do wedding/anniversary and birthday presents.  If you are interested, hit me up! 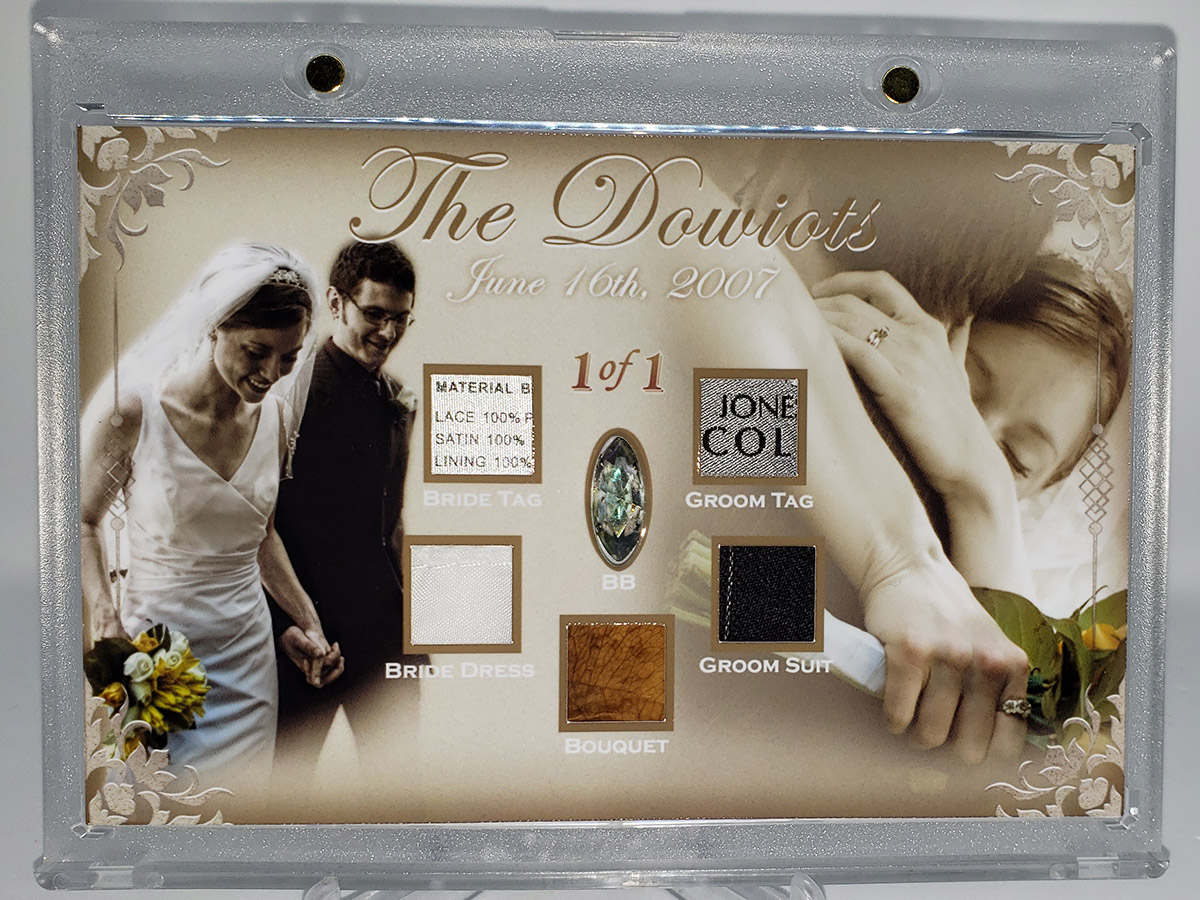 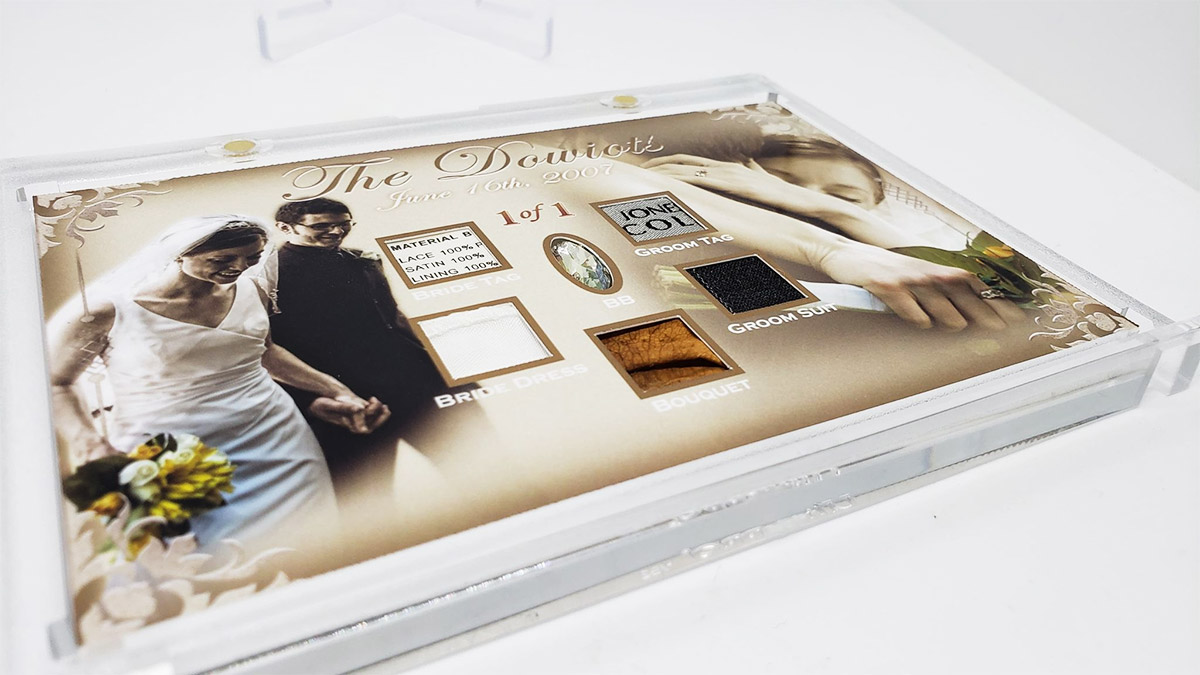 Social media has given me an outlet to be creative and have fun with my collection beyond just showing off my customs, as well.  The more I take pics of cards, the more I see it as both a hobby and an art form.  It also allows me to tell the story of each card I’ve picked up, which to me, gives each card even more meaning.

Pictured below is a 1999 Finest Gold Refractor run.  As you can see, the last one doesn’t have the deckle edge the others do.  It is also missing a serial number.  I had this before I sold out, and bought it back, not really worrying much about getting the regular version, primarily because the missing deckle edge version is much, much rarer, or perhaps even one of a kind.  I’ve never seen another and may never again!  After buying out a few supercollectors, and trading for another, I had some fun … 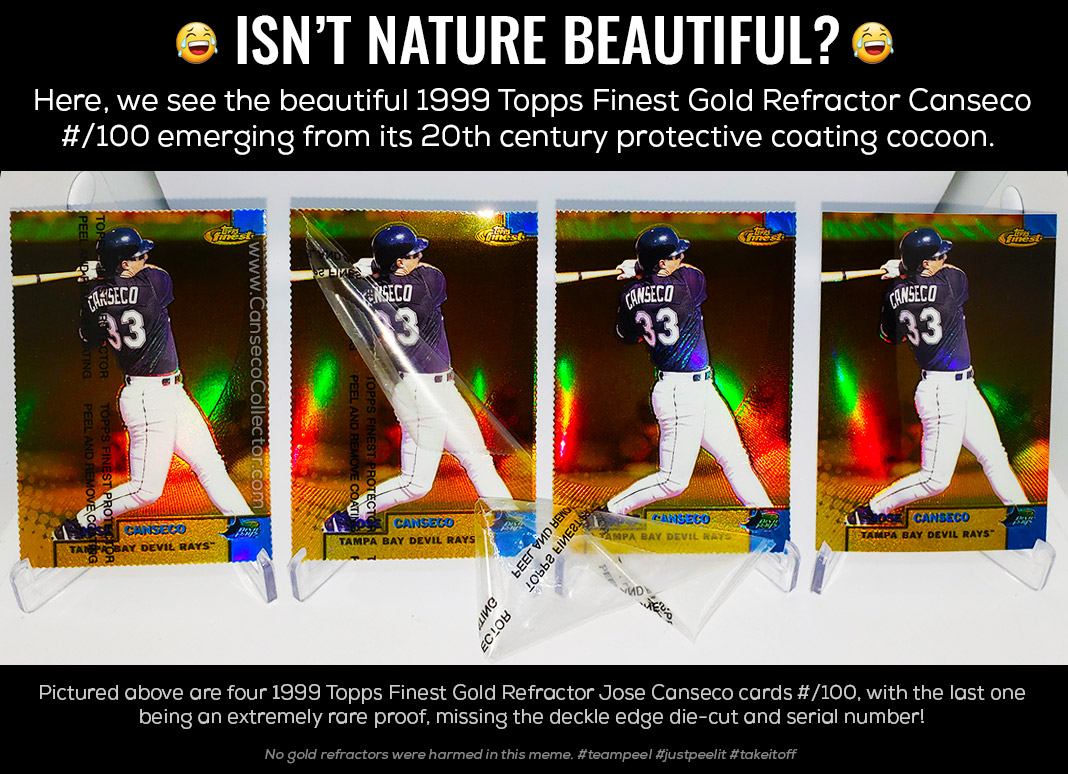 And this is the 2000 Finest Gold Refractor.  Same as above, the middle one is missing the deckle edge.  I sold it and bought it back, then got the other 2 from the supercollectors I bought out.  I rushed to get the missing deckle edge version because I will likely never see another.  It is funny how I appreciate it even more now that I have the pack pulled version (or two) to go along with it!

Here is another view for you to see the difference … 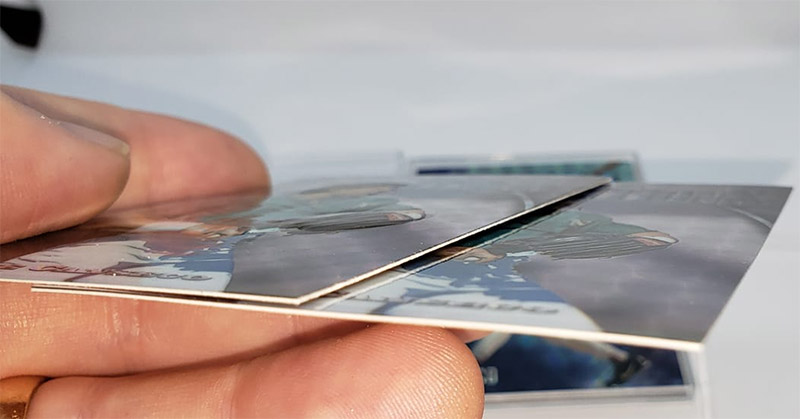 I decided to put up for sale my Houston Astros 1/1 quad patch of Houston’s “Core Four”.  I am well aware (thanks to experience!) that people will trash the card’s very existence because … well … Astros …  so I thought I’d beat them to the punch by posing it next to my bobblehead hitting a trashcan. 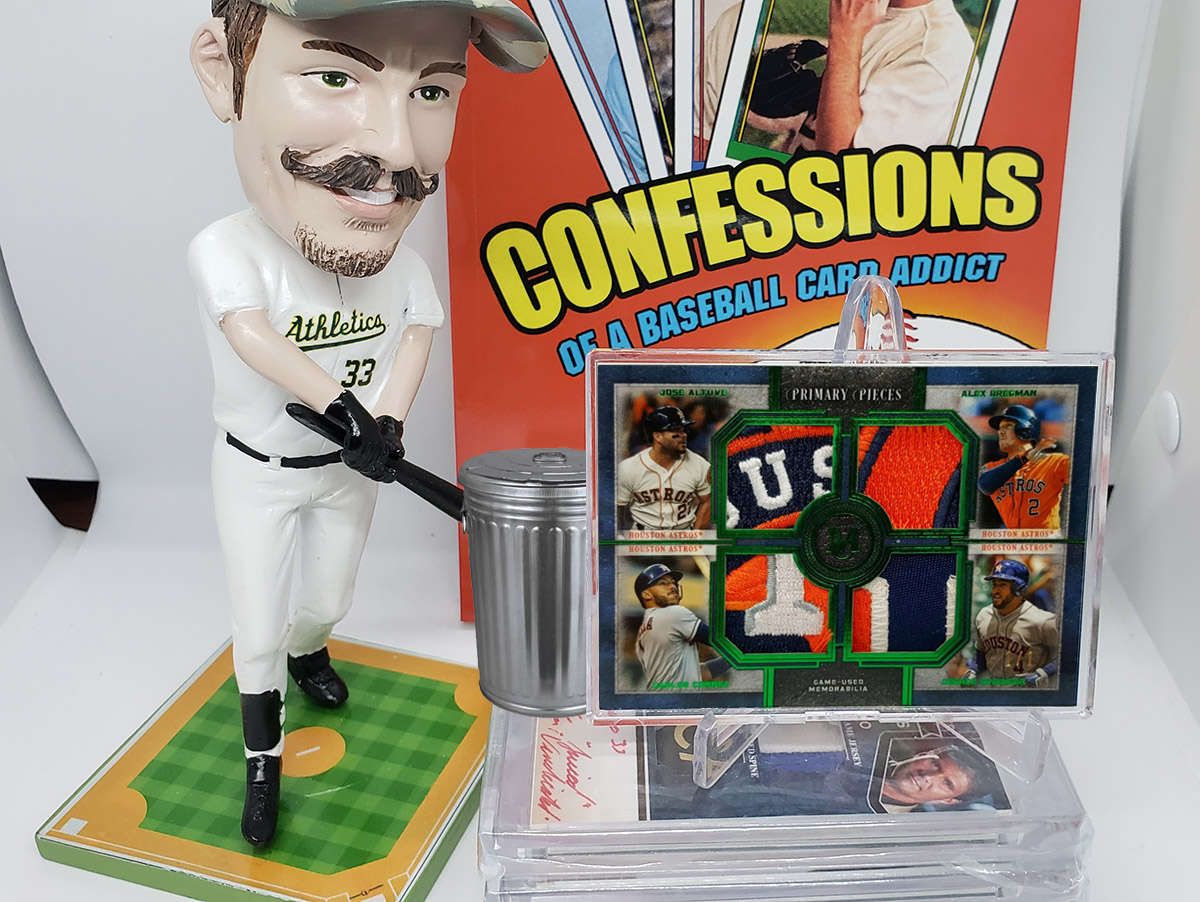 May, 2015: My family was on the way to Jose Canseco’s house, when I checked eBay. A BEAUTIFUL 2000 Stadium Club Chrome 1st Day Refractor #/25 pops up. I was ecstatic because I had never seen one for sale before. My buddy gobbled it up before I could

Since then, I was able to land the (likely much rarer) non serial numbered version.  Like the others, I sold and got it back (interestingly enough, from my buddy who picked up the serial number version!)  After never having seen another serial numbered version, I landed one! Here they are together, in all of their rainbowy glory.  It was not for sale, but was a trade from a private collector as it was never meant to see the light of day again. 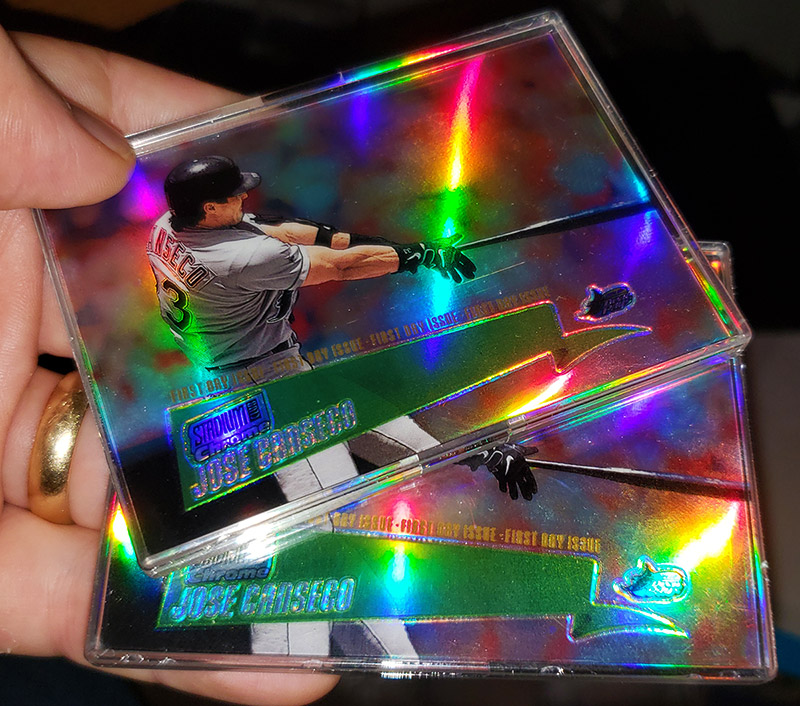 Dufex printing was a process developed by F.J. Warren in the early 20th century, and involves printing images onto aluminum foil-lined paper or cardboard, using UV formulated transparent inks, which allow the reflective shine to be retained.
Here is some of my favorite Dufex eye candy. Jose looks like a warrior doing battle … that or he just got hit on the hands with a Randy Johnson fastball. 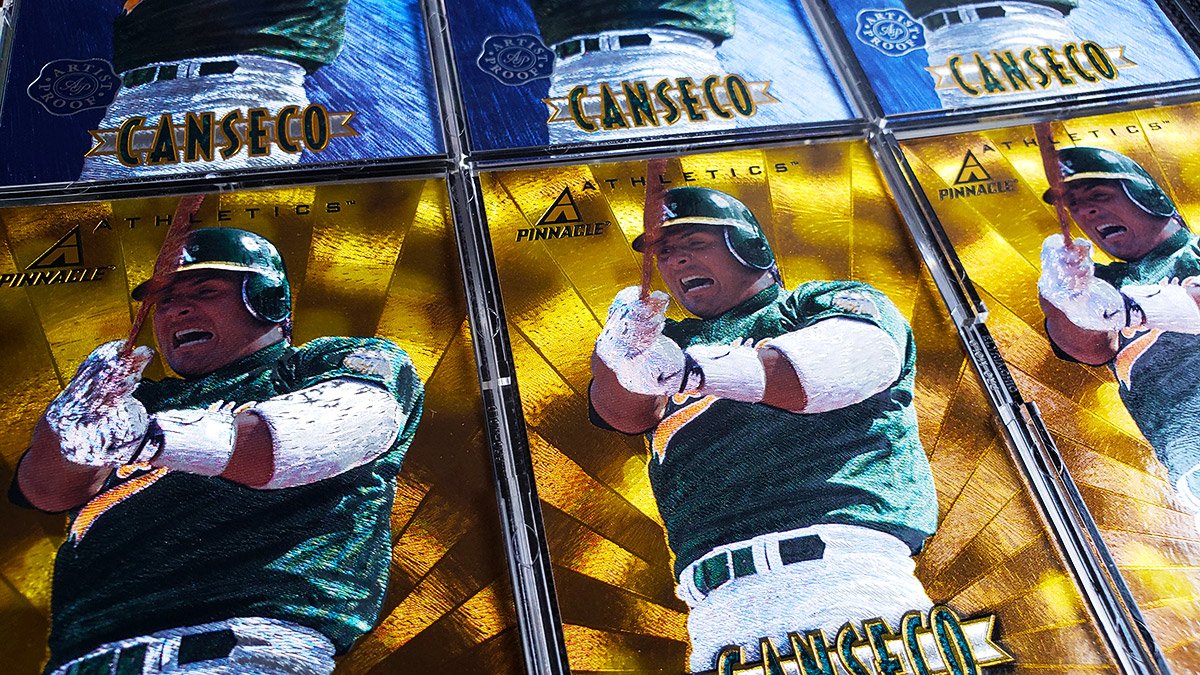 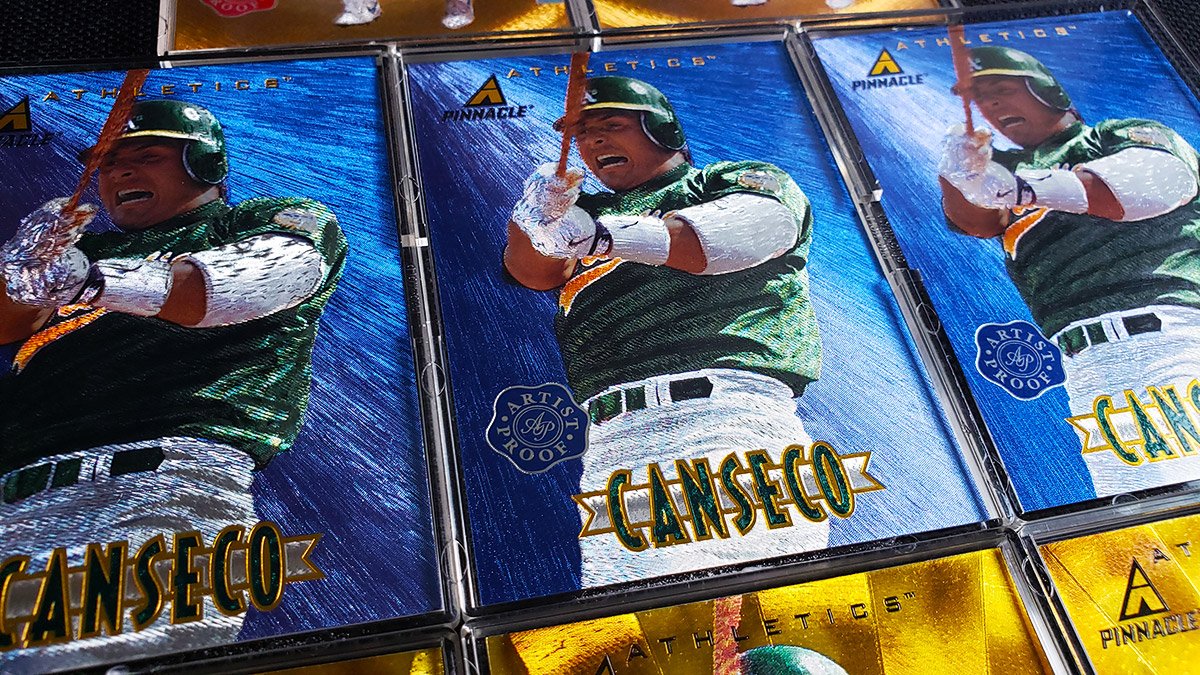 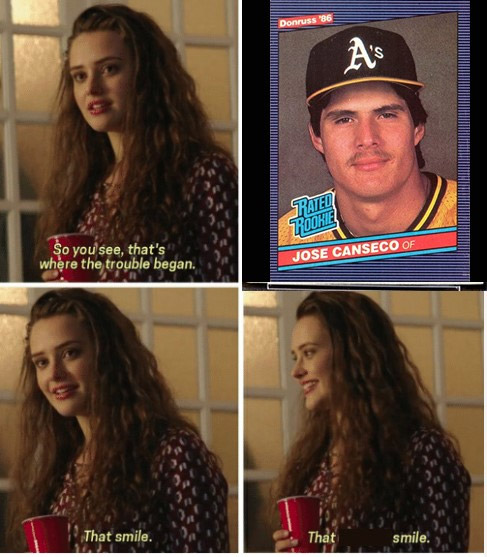 YEARS ago, I was in Wal-Mart, checking eBay as we were going down the aisles, and saw someone post up a 2005 Donruss Signature Silver set for $2,500 – the cards all have a print run of /8.  Immediately, I reached out asking the seller if he’d be willing to break it up, and if so, what he would take for the Canseco.

As it turns out, he said the Canseco was the hardest and priciest to get – and that he was actually featured in Beckett magazine as a Supercollector of the set!  I printed out part of the article and kept it with the card.  I sold it when I sold my collection back in 2018 to one of the guys I bought out, so it is back!  Here it is.  It has never looked more beautiful to me. 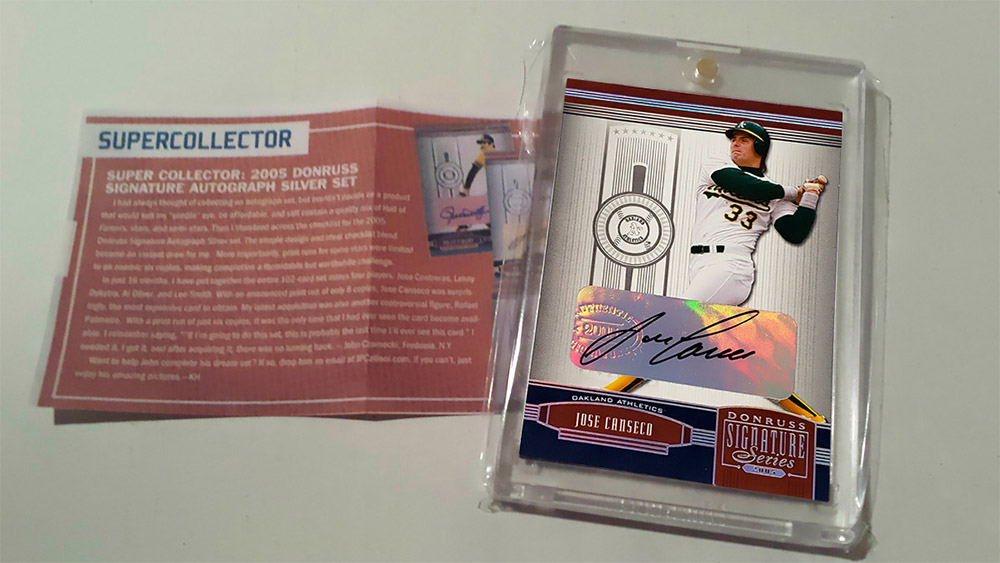 I haven’t done as much trading since I was a kid as I have these past few months. I now have the 03-04-05 Topps Retired Refractor Auto #/25 Trifecta!!!
I already had the middle one, though I had to trade back for it a couple years ago after sending it to Canada. I think it is my most favorite refractor card, ever.
The other two? I’ve never seen either for sale. I still haven’t! I did see them in a private collection among many other cards. Pics showed they had a hint of refactor properties. Sure enough, they were the never before seen gems!
These have never surfaced in the time I’ve been paying attention, which leads me to believe that set collectors gobbled these up shortly after their release dates 15+ years ago.

The other day, I decided to pull together my TOTT and Absolute cards for a photo op together.  They are all either #/10, /15 or /25, with a couple being 1/xx.  When I was able to take the right picture, I fell in love with the setup. 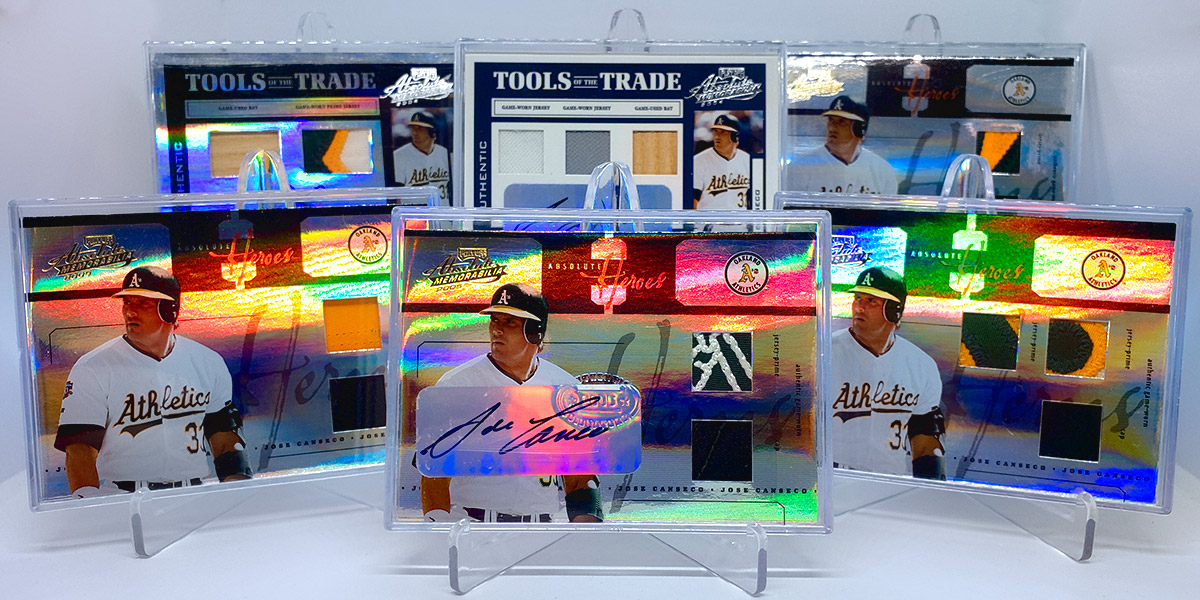 I continue to learn new ways to enjoy this hobby of ours.  Life has thrown a lot at me recently, and the more I go through, the more I realize that it isn’t about trying to just get through the struggles you have – there will ALWAYS be struggles and trying times – it is all about how you manage them.  As I finish writing this up, I can see the workers setting up our new AC … rest assured, a problem is just around the corner, and that’s ok, because that is life.  Creating customs, collecting cards, and enjoy the cards I already have by sharing them online has been a great release.  What a great hobby we are blessed with!