There’s no way around it.  When you are going after something rare at auction you love, and you lose, it sucks.  You can internalize it as “the one that got away”.  That’s where our story begins.

About a month or so back, I was browsing an auction house website and came across a near complete set (96/100) of an extremely beautiful issue offered over 100 years ago.

Measuring in at nearly 8×10, the 100 piece set was inserted at a rate of one every other issue from 1909 to 1913 of Sporting News.  They feature magnificent sepia toned action photographs that seem to capture the game in a way no other baseball cards were able to from before World War 1.  With the way the photographs focus on the players, and blur the background, they are hauntingly beautiful. 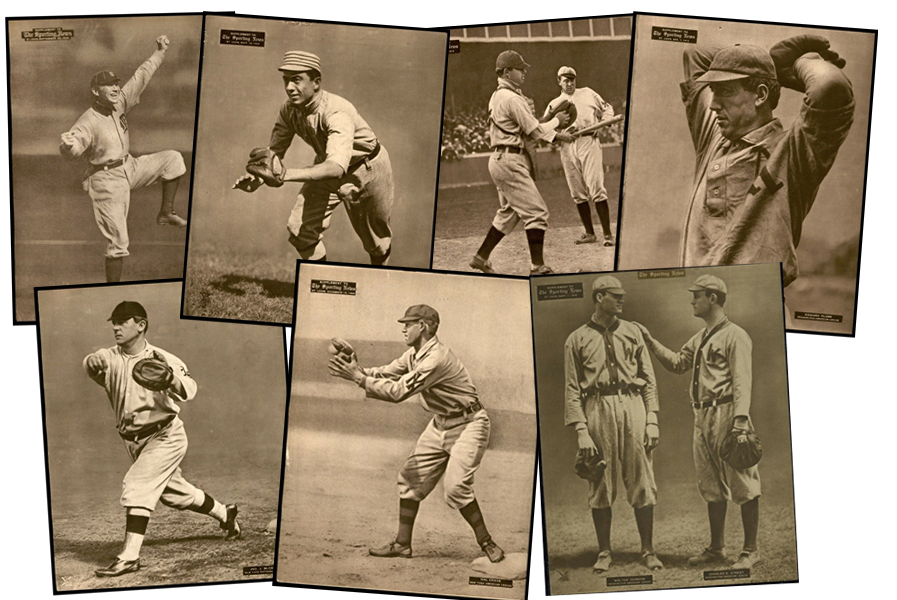 There are many set collectors out there who go after this behemoth because of how truly incredible they are.  Baseball card collectors who are heavily into presentation and displaying their treasures may consider these as some centerpieces of their collections, whereas those who desire to keep their collections in standard sized boxes may be turned off by their size.

Like the 1889 Goodwin A35 Round Album Set I recently customized and wrote about, these are a victim of their own size and beauty – perhaps even more so, though being 20 years newer.  They are still over a century old.  Produced on extremely thin stock, the 1909-13 M101-2 Sporting News Supplements are afflicted many times be their brittleness, tearing, creases and even multiple folds.  Many collectors find these sorts of afflictions as forgivable given the medium and the road many of them have had to take just to survive.  These aren’t tiny T206 cards (produced around the same time period) that were much smaller, easier to store, thicker, less brittle and less prone to be tacked up on a wall.  They were meant to be displayed – and oftentimes by being glued or tacked onto something.

The auction I lost out on

When I ran into a listing at an auction house selling 96 of the 100 piece set, I couldn’t get them out of my mind.  All 96 are beautiful, but if I’m being honest, there are two I was mainly interested in – the two most sought after in the set: The Ty Cobb / Honus Wagner, and the Shoeless Joe Jackson.  Both of which were PSA graded as “Authentic”.  According to the auction house that had them graded, there is no reason to believe they were altered in any way, but it was suggested they may grade low, which is perhaps due to some light residue on the back sides.  Because of this, the auction house decided to have them grade as Authentic.

I made a run at all of them, and played leapfrog with another bidder on the last day.  At the 11th hour, I lost out and was really bummed, but placing another bid would put me quite a bit higher than I’d want to be on them.  I immediately placed the Shoeless Joe Jackson and Honus Wagner / Ty Cobb on my want list, though frustrated that I may never see PSA graded copies that nice ever again.

One morning, I woke up, and as I was making breakfast, I checked eBay.  Lo and behold, a PSA graded Cobb/Wagner was listed!  I checked the seller’s other listings, and sure enough, the Shoeless Joe Jackson was there as well!  I reached out, and by lunchtime, I made a deal.  They came in a couple days later and proudly displayed with my favorite cards of each player!  Here they are …

This legendary photograph was taken from the famous 1909 World Series, the most anticipated of its time.  It was the ultimate good vs. evil match-up between the two biggest titans in the game.  The match-up had everything that sports fans dream of:  The best of the best against each other.  An in depth look at the titanic series can be found in the book “When Cobb Met Wagner”.  I generally like my cards and collectibles to feature one player, and one player alone.  This is an extremely rare instance where I value the two on the same piece much higher than their solo issues.  At the moment, this is a POP 1 … yes, this is the first and only one that PSA has graded at the moment!  It is in amazing condition as well. 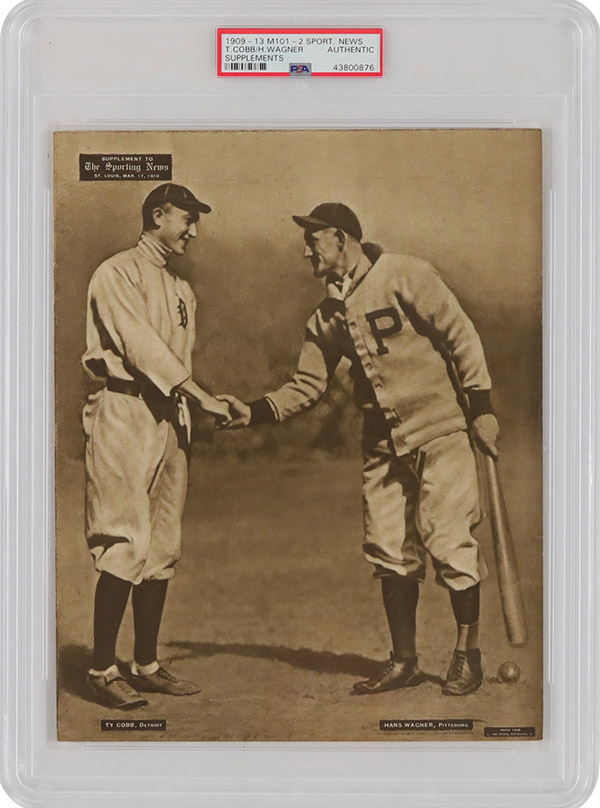 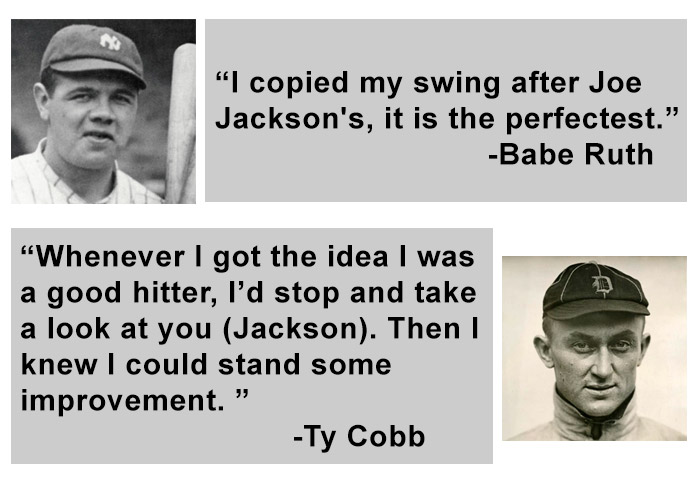 It is high praise when arguably the best two players to ever play the game attribute so much to you.  I often wonder why Jackson doesn’t have many baseball cards available.  Though iconic, three of his most recognizable cards don’t do his likeness any favors.

Don’t get me wrong, I’m in absolute love with all three of those issues (especially the Cracker Jack!), but the 1909-13 M101-2 Shoeless Joe Jackson captures him in a way no other card has. 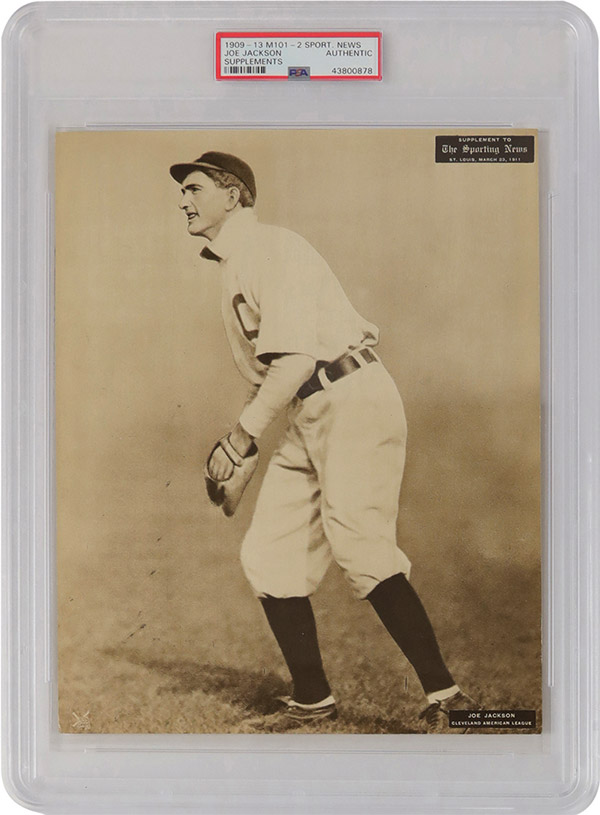 I’ve looked at several of these that went to auction over the past 15 years, and this is the finest example I’ve seen.  I was amazed at how beautiful and clean it was when it came in.  This PSA graded version is a POP 3.

I have had dreams for about a couple months of displaying them with my favorite cards of each player.  Here they are: 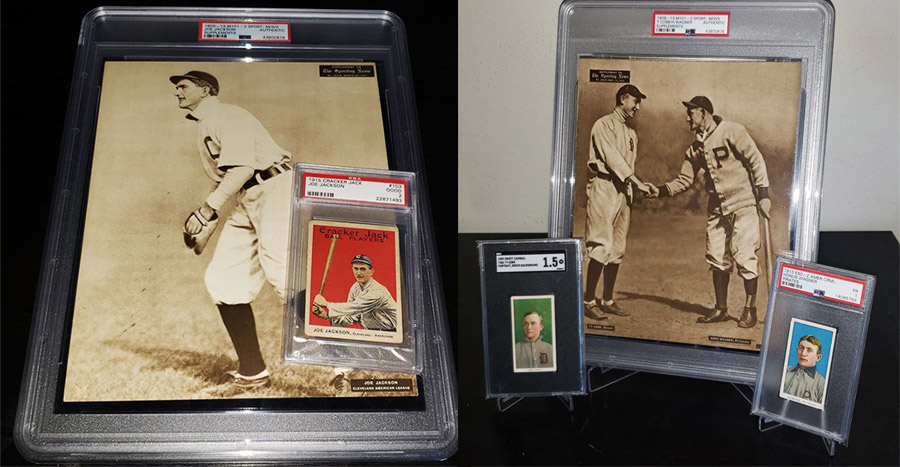