On the Blowout forums, someone made a post asking about what card brings you joy.  I LOVE this topic – while the entire hobby brings me joy, I thought I’d put a spotlight on one card in particular.

Rather than gush about a Canseco card, I wanted to show my most meaningful non Canseco. As a kid, I read a book called Billy Sunday: Baseball Preacher. I remember nothing about the book itself, but as someone who loves both Jesus and baseball, this clicked with me. The cover of the book had a mock 1956 Topps card if I recall correctly. I never thought about getting a card of his … until I got into vintage.

I did some research and quickly found out a 1956 baseball card didn’t exist of him for some reason. That’s because he played over 70 years before that! This was mind blowing to me. How could this guy have played before a time of phones, television, automobiles, electricity, etc.

He played alongside the likes of Cap Anson and King Kelly, two of the biggest 19th century stars baseball ever produced.

During his playing career, Sunday answered the call of the Lord and became an evangelist … one of America’s first, and most famous, to this day.

I found out he was in the Old Judge set, which … let’s face it – is quite pricey, even if they are beat to death. Many of them have super faded pictures. When this popped up, I was jumping out of my skin excited because it checks ALL the boxes I love about Old Judge cards: Solid picture, incredible back drop, ball suspended in the air on a string and no glove. To top it off, it is my favorite pose of his in the set! The only other one I have seen for sale was found in Worthpoint from over 13 years ago, and part of the front of the card was missing.  (SGC & PSA POP reports show a combined 6 having ever been graded.)

Out of all my other vintage HOF I have, I’d easily sell them quicker than this one – Anson, Shoeless Joe, Cobb, Wagner, Ruth, Mantle, etc. In fact, I’ve had a number of HOF Old Judge cards that I have already sold, because this is THE card I want to keep as the OJ example in my collection.

Here it is, raw as I bought it, posed next to the Old Judge reference book, and a picture after I had it graded … it is the ONLY card I have ever had graded myself! 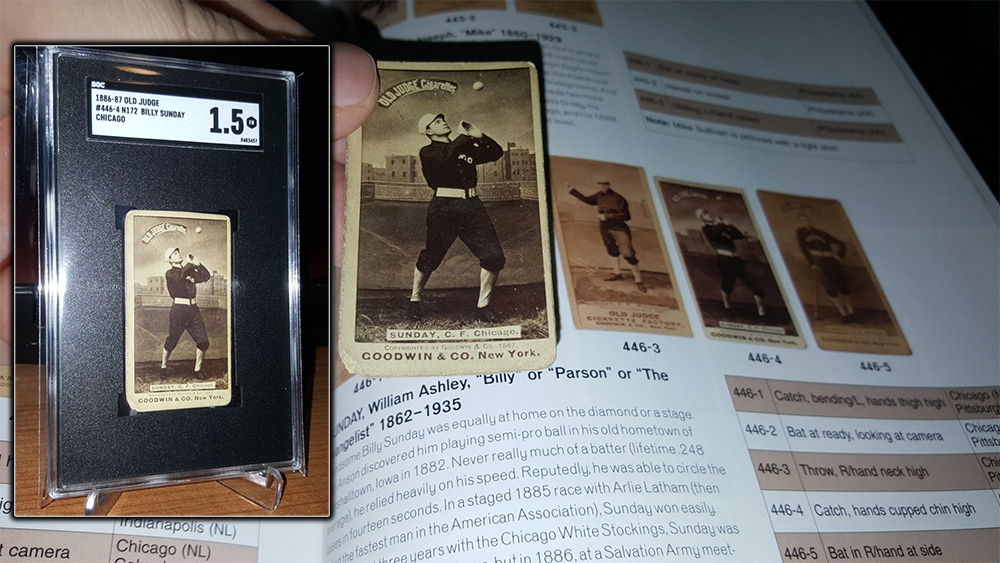 What card brings you incredible joy?