Hey guys!  I don’t know why, but the nostalgia bug has bitten me hard.  I was susceptible to it anyway, being a baseball card junkie (I wrote a book “Confessions of a Baseball Card Addict”) – no doubt, people thought I was a nerd.  Then, I started looking at Transformers & Voltron.  Nerd level ratched up to 10! 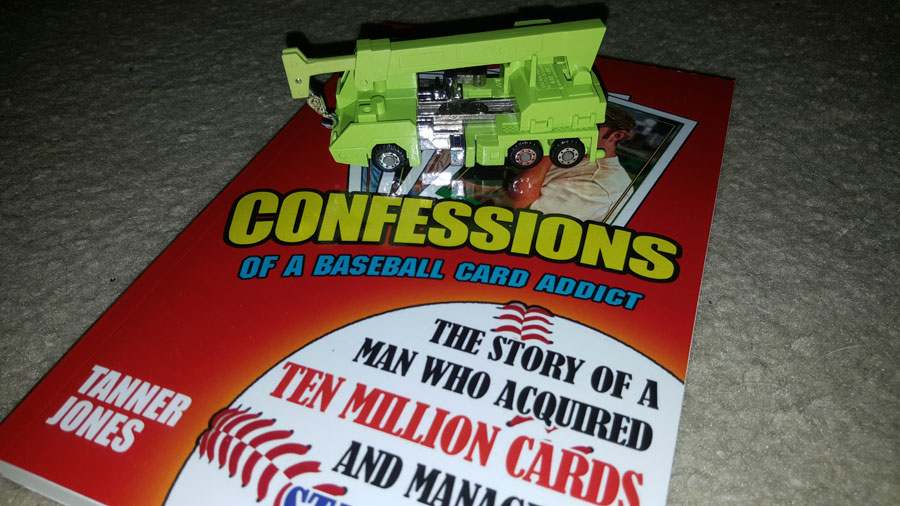 I don’t recall watching the cartoon much at all, but even as an adult, I always thought the concept of having a robot toy transform into a vehicle was brilliant.  Having several robots that can transform into a bigger robot?  Beyond brilliant.  I just can’t wrap my mind around the thought/foresight/skill that would have to be put into something like this.  Clearly, a degree in rocket surgery is a must!  😉

The desire to dip my toe into all of this actually started a number of years ago.  I don’t know why, but something sparked my memory into remembering something about being amped about getting a blue toy lion for my 6th or 7th birthday.  I was so bummed that my parents said I could probably get one lion every birthday.  This was disheartening … I mean … wouldn’t I be a great great grandfather by the time that happened?  I never got another lion.

I remembered it was supposed to connect with other different colored lions to form a big robot, but I just couldn’t remember the name.  What was it called?  Ahhh…yes… surely it was Thundercats. 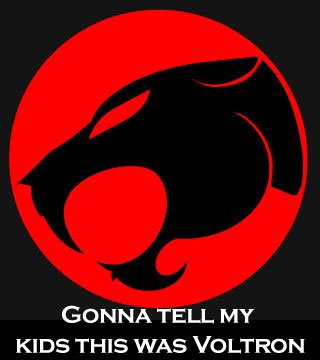 After doing some searching on eBay, I quickly found out that I was dead wrong … it was named Voltron!  I saw the price and was turned off by that fact, along with the realization that I was going to have to spend a lot of time researching which one to get, so I eventually gave up the thought altogether.  Years later (this past Christmas) I decided to take the plunge, and research it.  I found out that based upon my age, the odds were that I had a “Panosh Place” Voltron.

After a lot of research, I found a nice original set from Panosh Place with figures – world domination!  I have the entire set.  Six year old me would surely smile.  I was vehemently against getting anything other than originals – a theme I continued with in my quest to collect transformers. 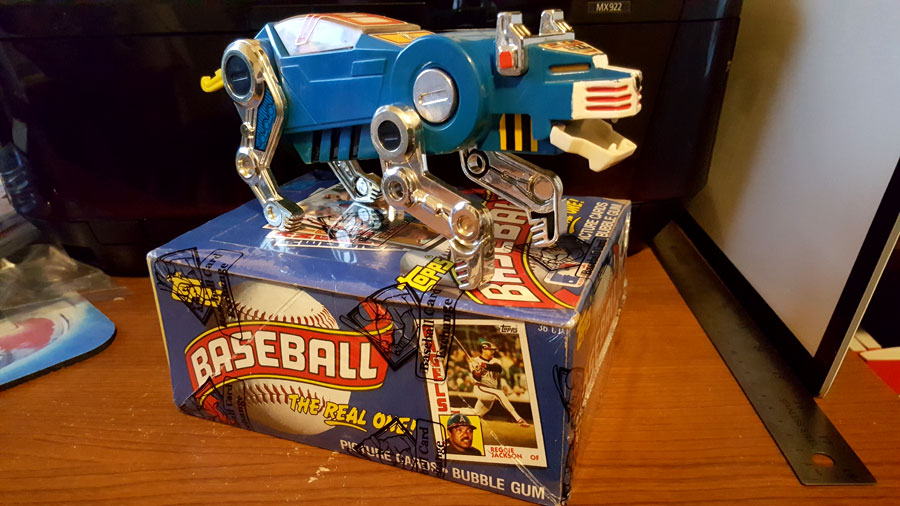 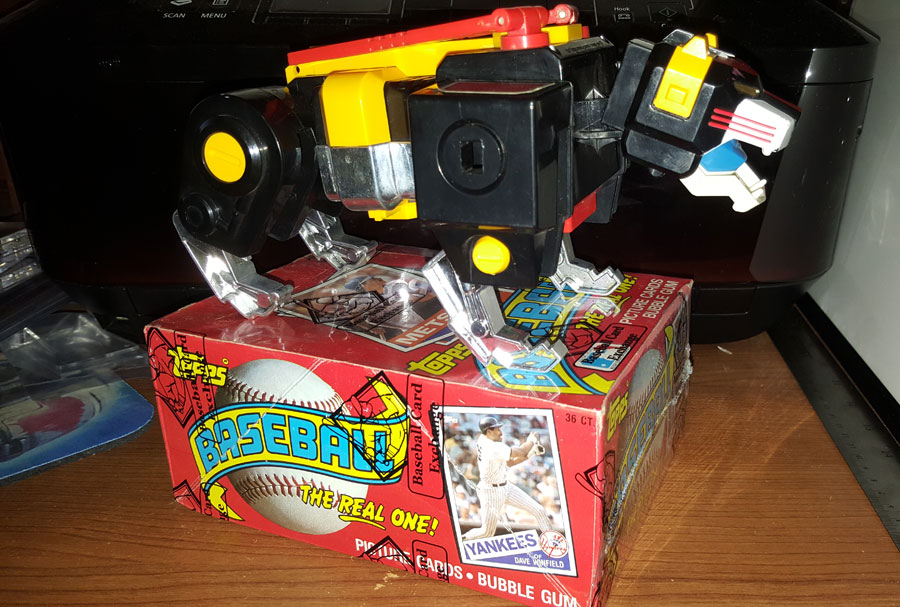 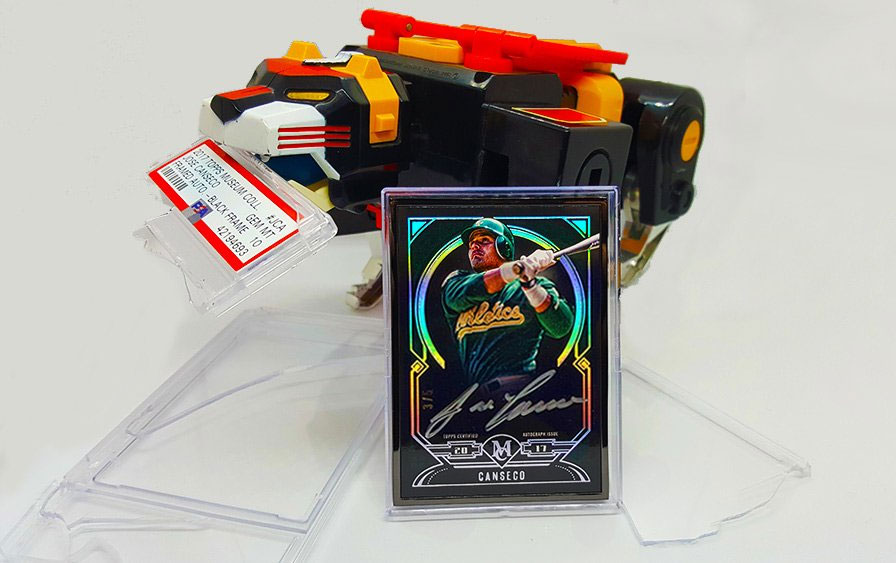 With as quick as I verbalized my disinterest in newer pieces, I found myself online, researching why people liked them.  Since they were making them, surely people liked them for some reason.  As it turned out, I fell head over heals for them.

Eventually, I ended up getting the cream of the crop when it came to Voltron:  The GX-71.  Die Cast, smooth, trim, poseable – basically everything you could ever want in a toy.  Man alive, is it smooth.  It makes the original plastic Voltron I had feel like a stiff relic – not that that’s a bad thing, by the way. 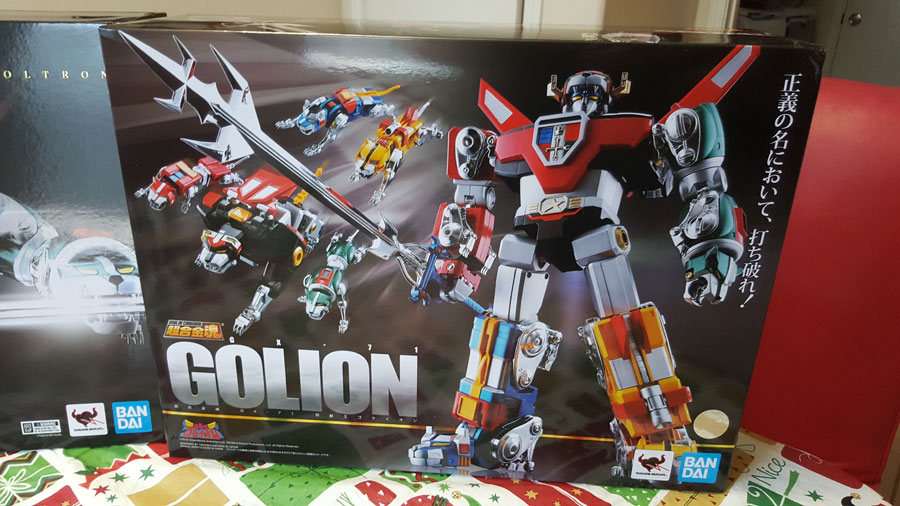 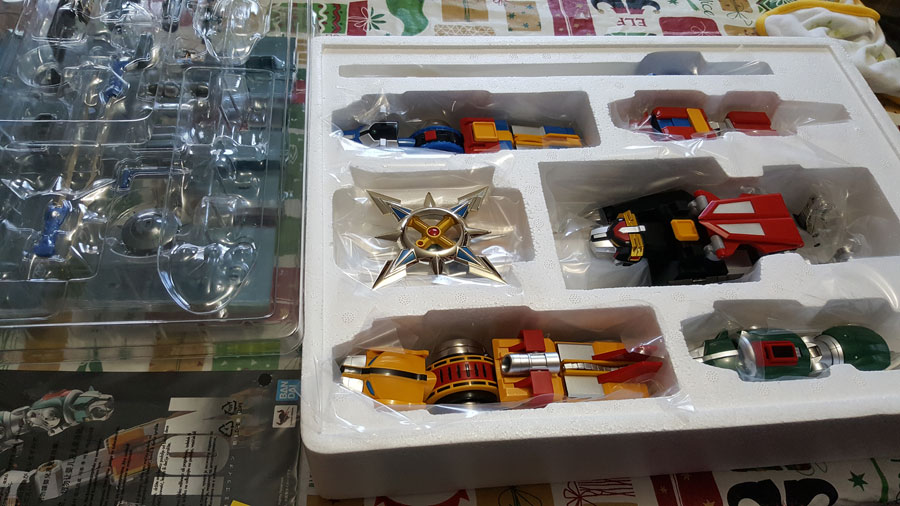 This is my son helping me put it together on Christmas.  This set seemed simple enough to put together.  I’m not mechanically inclined, but this was so easy, perhaps transformers and all combiners are this easy!  (Spoiler alert:  WRONG!) 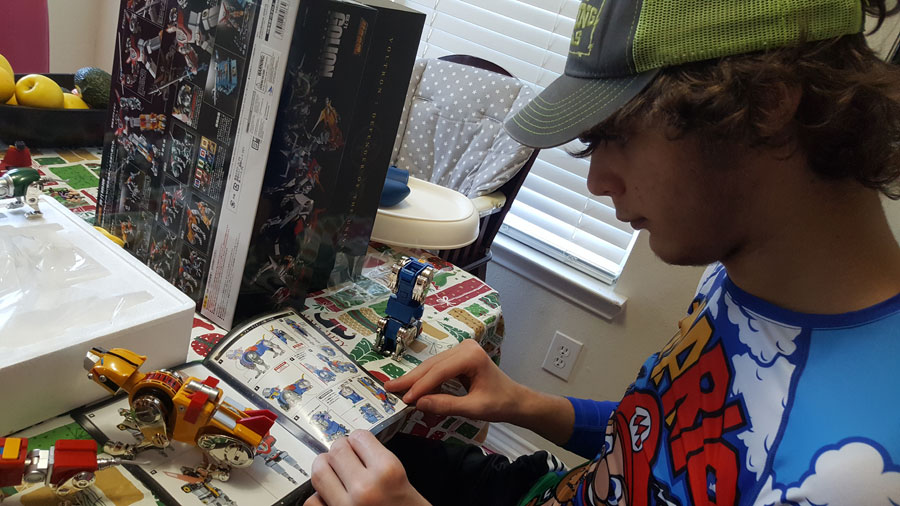 Here are the GX-71 and Panosh guarding a hat Canseco wore, a game used glove I traded him for and a card I made.)  I’ve gone round and round – I am honestly not sure what I like best! 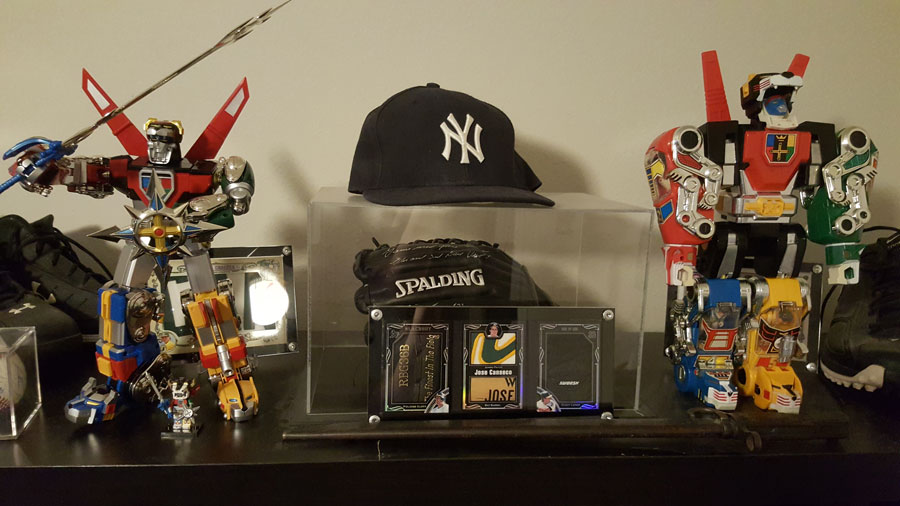 Here is a pic of the NEW blue lion by itself.  Man, this thing is fresh to death. 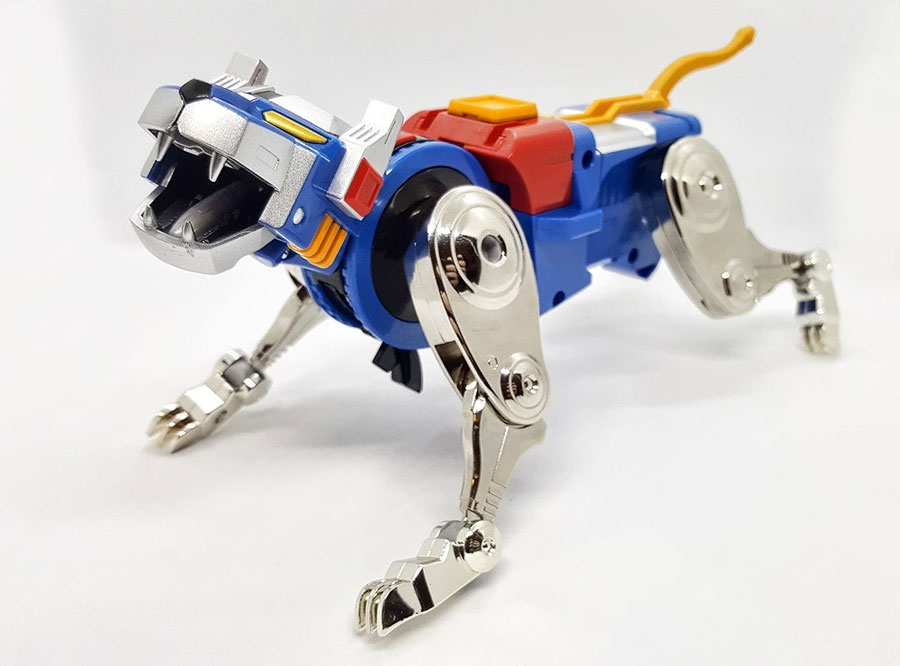 As with many things that have to do with nostalgia, something triggered my memory again.  A light green construction truck scoop from a bulldozer or something.  I don’t know why, but I remembered that transformer very, very vaguely, from my friend’s house, and transforming into being a foot for some reason.  I researched it a bit, and found out that it was a part of something I had long forgot:  It was a transformer that combined with others to form an even bigger transformer.

Remembering this for the first time in decades really stirred something up inside of me.  I did some research and just had to buy a set.  As before, I was completely against any of the aftermarket “junk” (so I thought in my head, that is!) so I picked up an original G1 set.  Lime green goodness … so awesome. 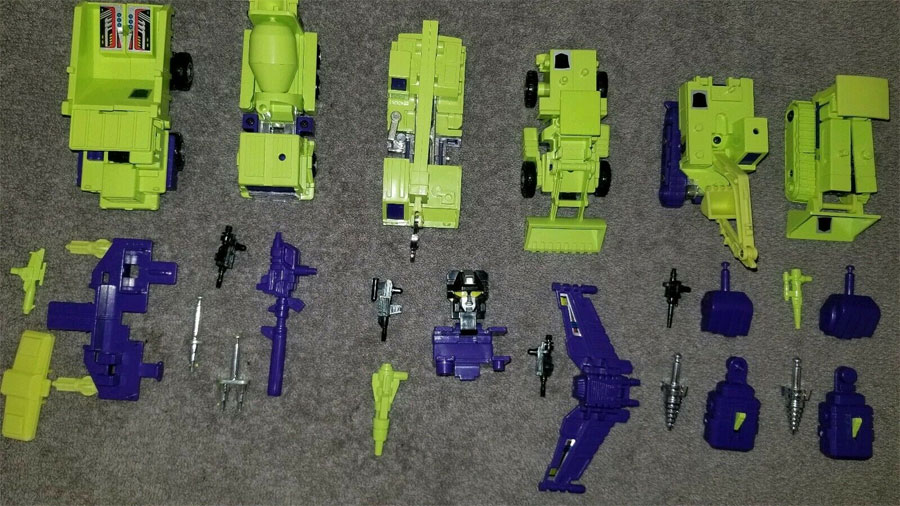 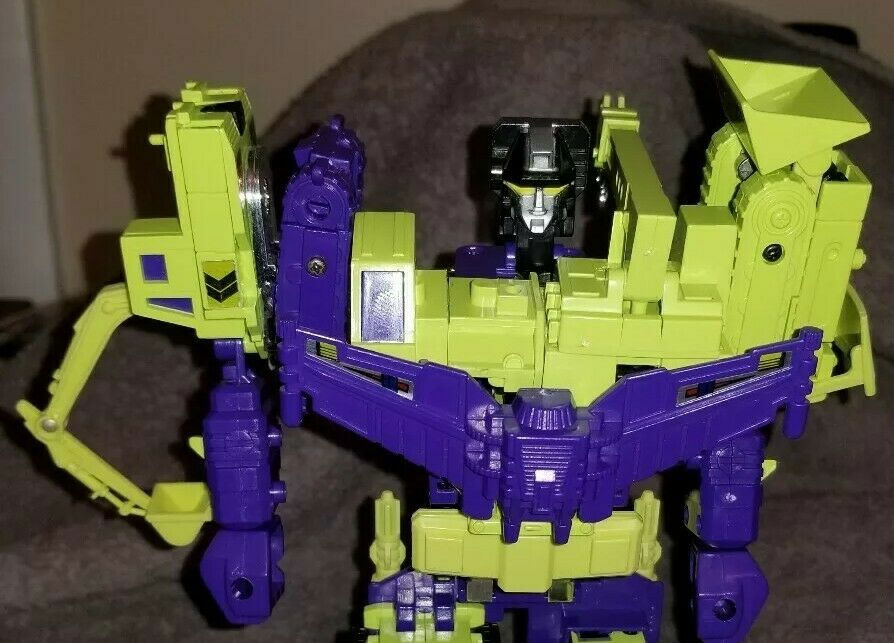 I looked up clips of the Devastator, and even watched a clip from the Transformers cartoon and secretly cheered him on as he whooped up on Dinobots.

Dinobots?  Why did that seem so familiar?  How on earth could I have forgotten about something so cool as a dinosaur robot transformer … for decades???  I had another super vague memory of a Triceratops that was a dinosaur transformer my friend had, and was immediately hooked.

I guess it was around this time when I determined that new and shiny Voltrons were cool, because I started looking into third party dinobots, and I was blown away.  I saw video after video of them – two in particular:  Fans Toys and Gigapower.  They were both incredible, but after seeing a ton of videos, the clear winner for me was Gigapower.  I was able to track down the set over the course of a couple weeks from various sellers.  When they came in, my jaw dropped to the floor – they were huge and magnificent!  They are the type of transformers you can’t stop looking at. 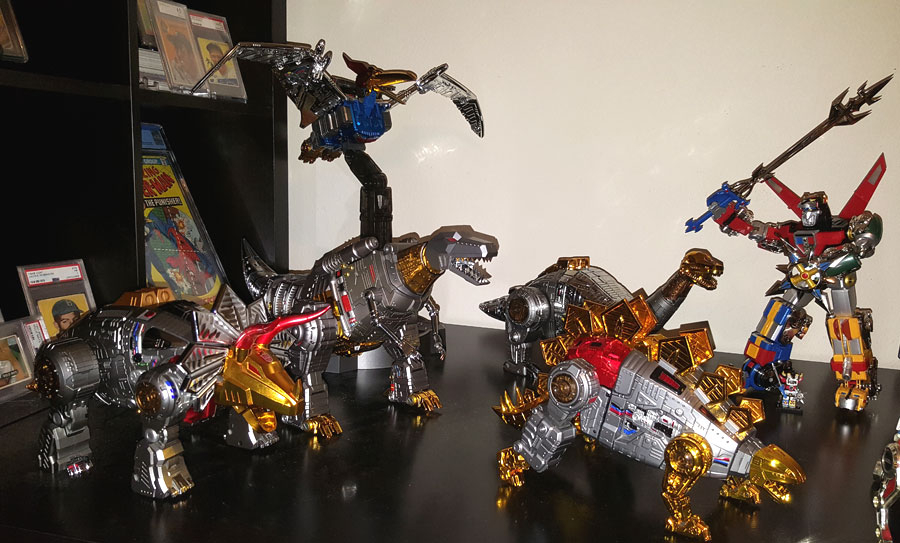 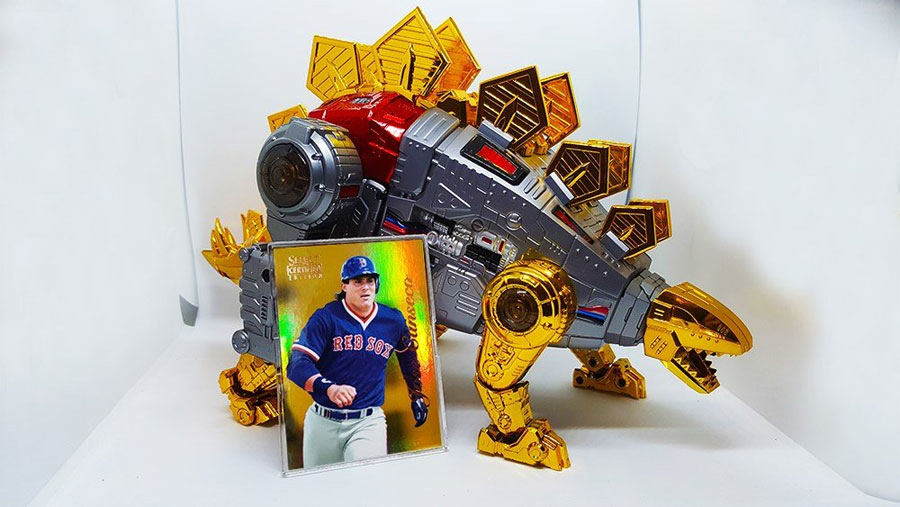 Any thought of staying true to the G1 Devastator was quickly dashed, so I again researched what was out there.  I found out that there was one made by Jinbao that had some wobbly issues, but also had an upgrade kit, so I decided to give it a shot.  Boy, am I glad I did!   The box the OS Devy came in – man, due to the coronavirus, I may have thought twice before touching this package if it came within the past few days. 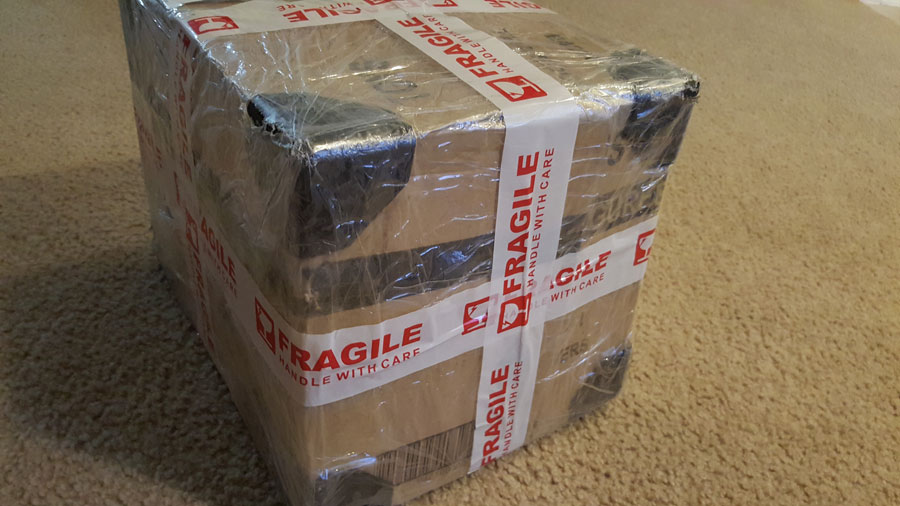 Here are a few comparison pics between the G1 originals and Jinbao: 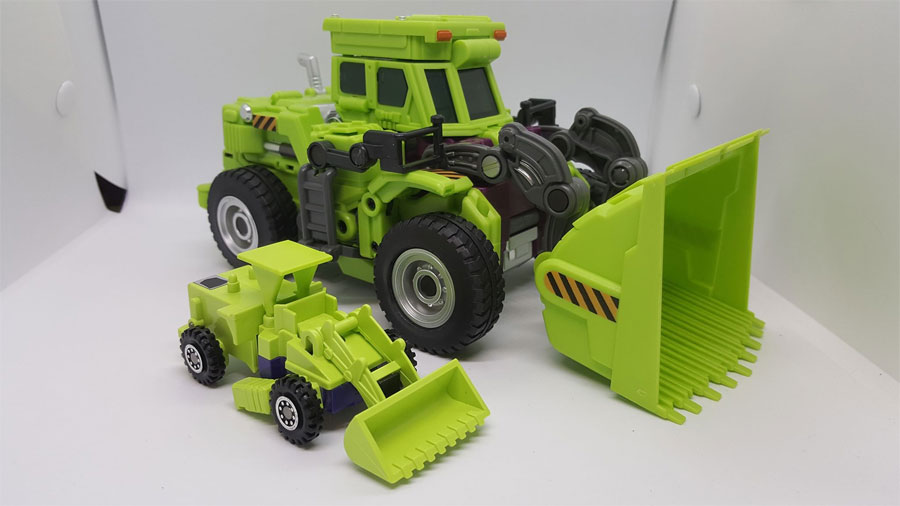 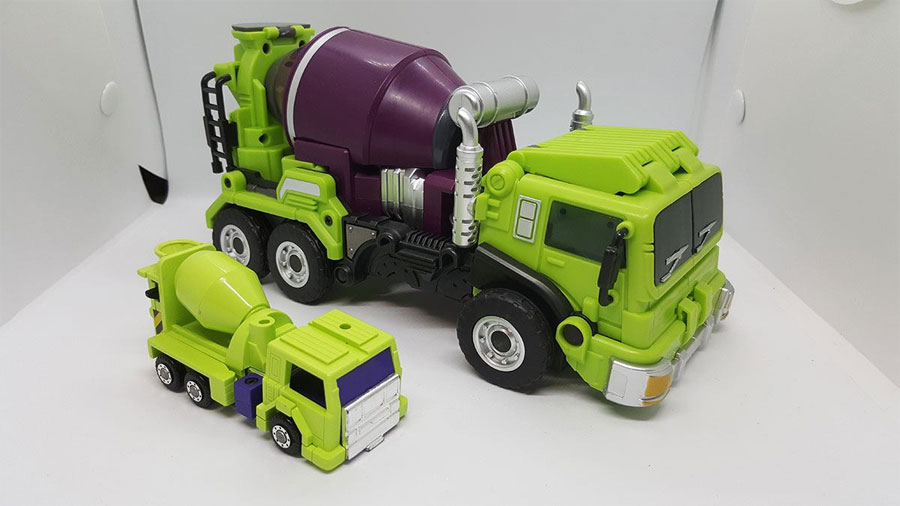 I’d like to go through a list of things I’ve learned being new to this hobby, but before I do, my mind has changed a lot over the past few months.  I remember seeing my first Youtube video of a grown man doing a review on a transformer.  I scoffed as he tested out each joint, enthusiastically chirping about its articulation … let’s be real, people.  What adult man is going to “play” with toys and put them in poseable positions?  That’s insanely nerdy.  (The answer: me, a few months later.)

So, without further adieu, here is my list of things I have learned.

– Original transformers are super cool!  But newer larger versions of the originals can quite frankly be massive works of art that are hard to take your eyes off of.
– The combiners (like the Jinbao OS Devastator) are huuuuge.  No picture or video can do them justice.  The only way to truly get a feel for how massive they are, you have to put them in your hands.
– It helps to be somewhat handy.  Simply put, I didn’t realize I was going to have to bust out the screwdriver and start taking apart pieces.  “Back in my day” a transformation could be done inside of a minute or so.  At least that’s what I remember.   Truth be told, with these behemoth works of art that are being created nowadays, it can literally take you an hour to a full afternoon to transform some of these pieces – especially combiners.

NOT what I signed up for, lol … 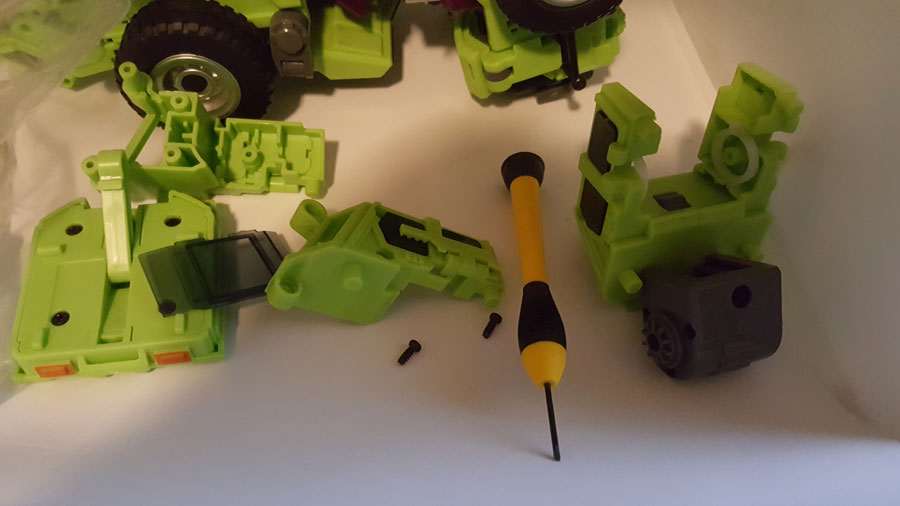 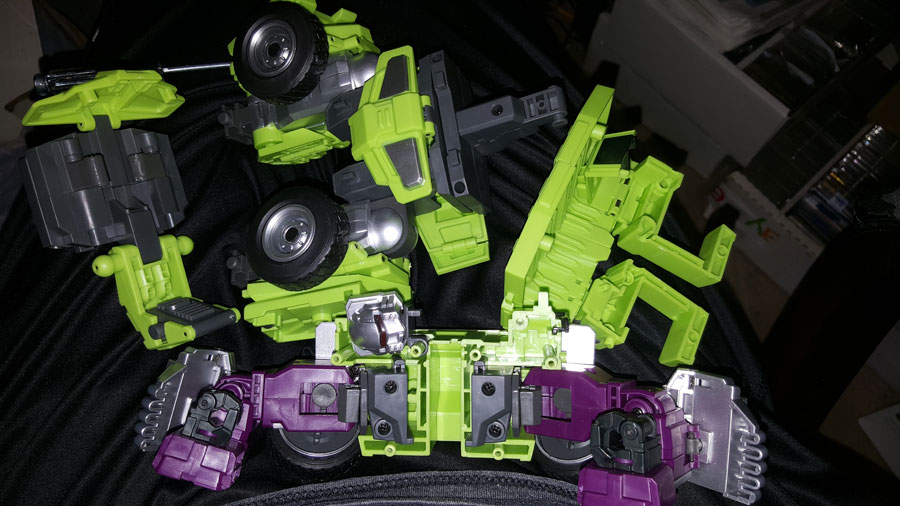 – Remember that dork I referenced that did a Youtube video reviewing a Transformer?  Well, without Youtube, I’d be dead in the water.  I’m SUPER thankful for all the “dorks” that do videos.
– Your fingers will probably hurt like crazy … you might even bleed!  I did something wrong when putting together the Jinbao OS Devastator and had to take off his arm.  It took so much force, it slid hard into my thumb, breaking back my nail … blood was everywhere.  It hurt!
– If you have to force something like CRAZY, you might just have to loosen it a bit with a screwdriver. 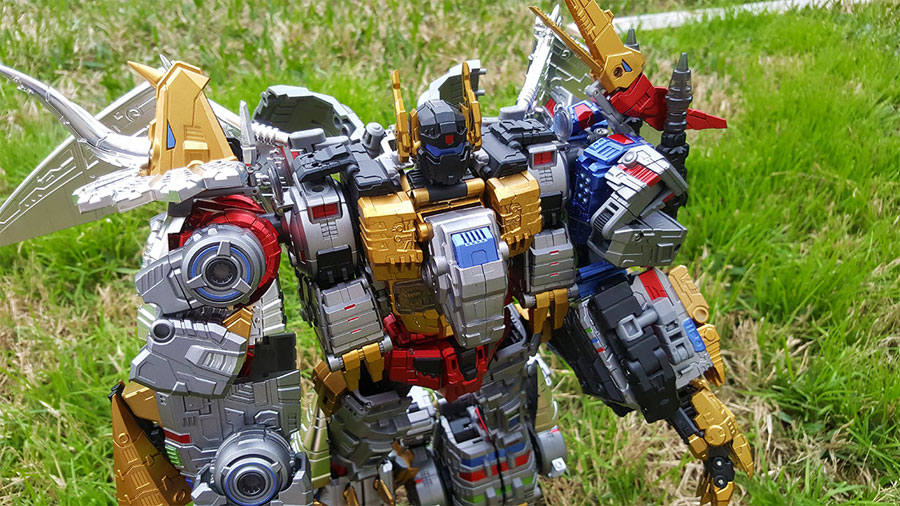 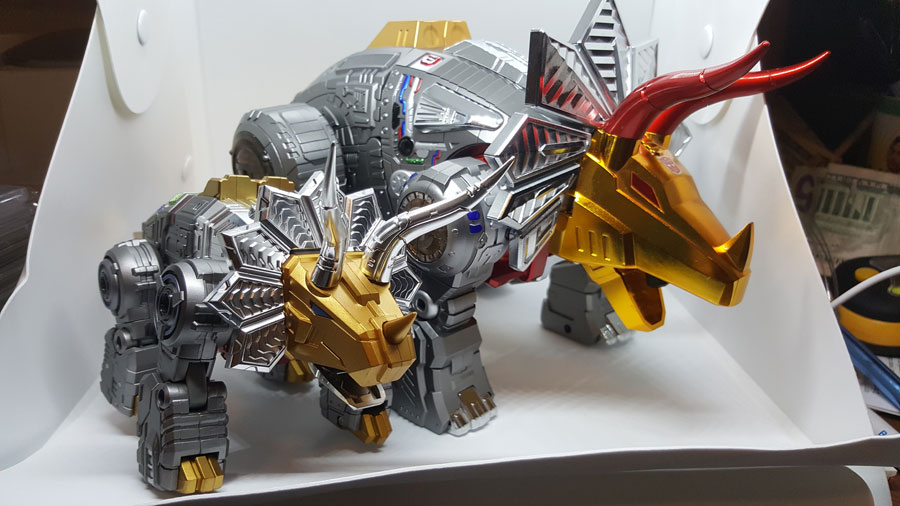 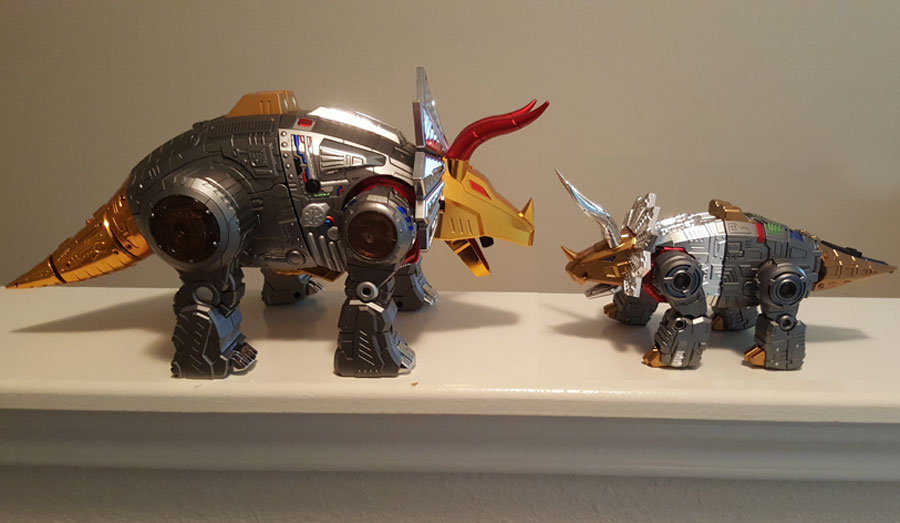 AWWWEeeeeEEE! A mama and a baby! 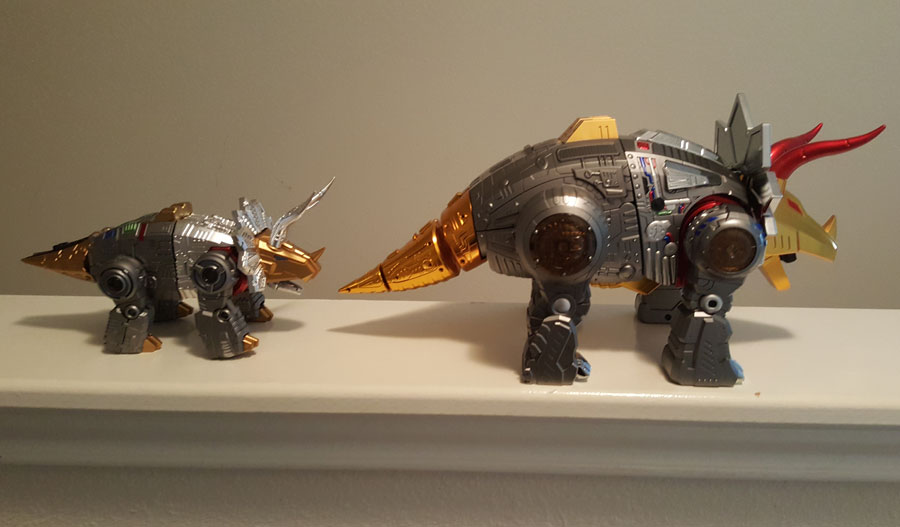 After having the Gigapower dinobots, I quickly found that I had zero desire to have any other dinobots in dino mode that are smaller.

After putting together Dinokong and Devastator, I can honestly say I’m very impressed by both!  When I put together Dinokong, I was impressed more the day after I put it together.  The day after that, I liked him even more!  Putting him together wasn’t the most enjoyable, if I’m being honest.  But ultimately, I thought he was the coolest.

Then I put together Devy.

To be honest, I HATED putting together the upgrade kit, but the transformations of each of the guys by themselves was fun!  Again, with the help of Youtube 🙂  I was particularly impressed with how the headpiece came together by folding the longer one in half.  BRILLIANT!  Putting together these pieces made me feel like the stereotypical old guy in his workshop carefully and artfully putting together a model ship inside of a bottle with classical music going in the background.  I guess 3P Transformers are the Gen X version of that. 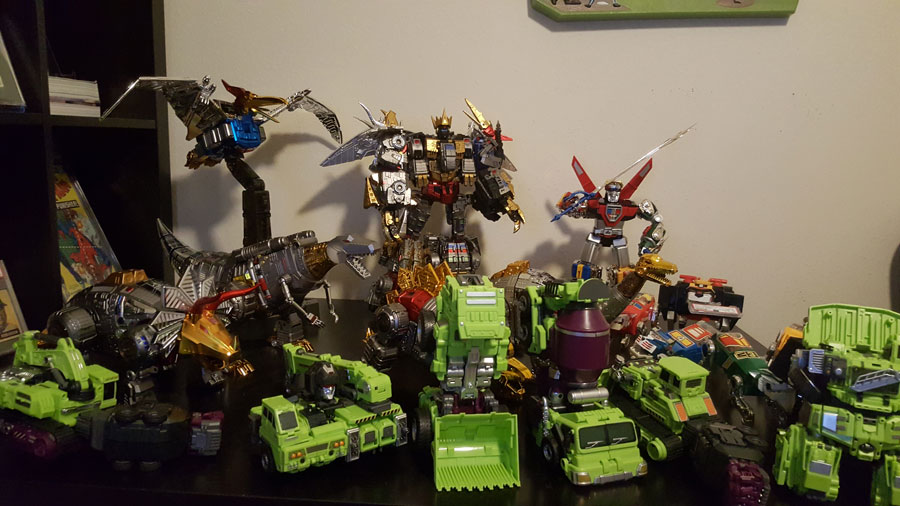 Once Devy was put together, I had to come to grips with the fact that I liked him better than the dino combiner.  I really, REALLY wanted to like Dinokong more … it checks all the boxes for me on paper … transformers … dinosaurs … combiner.  The Devastator just looks overpowering because of the size.  Again, you simply can’t tell how big they are just by the pictures.  Oh, and the Voltron? Forget about it – he looks puny compared to them, which is why he’s guarding my Canseco stuff 🙂 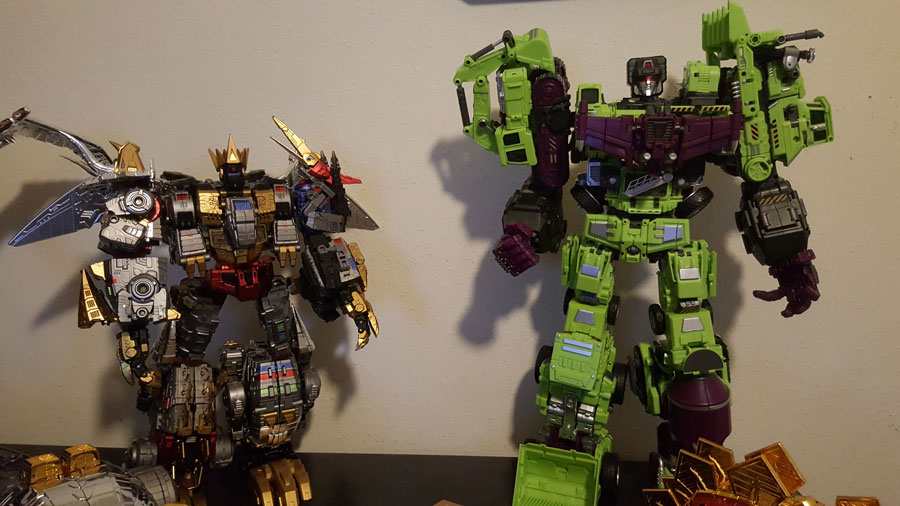 I really still do like Dinokong, but I’d love a dino combiner that’s actually even bigger than Devy.  I hope they make one some day soon!

So, there you have it.  This has been my adventure into transformers thus far.  With a couple combiners under my belt, I do look forward to a few more.  I’m looking at some cell shaded ones, as well as a G2 weathered Yellow Devastator … if you have one for sale, hit me up!