Man, what a year!  Seriously.  2019 has been quite the ride from a hobby perspective.  This year, I have made appearances on various radio stations, was featured on television, published in Beckett Sports Monthly, designed my first official “real” baseball card set, and even became a pod caster!

Book sales have been going well in my first year as an official author.  While I sell my book on Amazon, I’ve also had a number of folks reach out to purchase a signed a copy directly from me.  I thought it would be fun to do a graphic of the US showing how many states have purchased a signed copy of my book from me, and so far, all of them have, with the exception of Wyoming and Hawaii as shown by Dwight Schrute’s disapproving face.  I’m crossing my fingers that’ll change soon!  C’mon WY & HI – where ya at??? 🙂 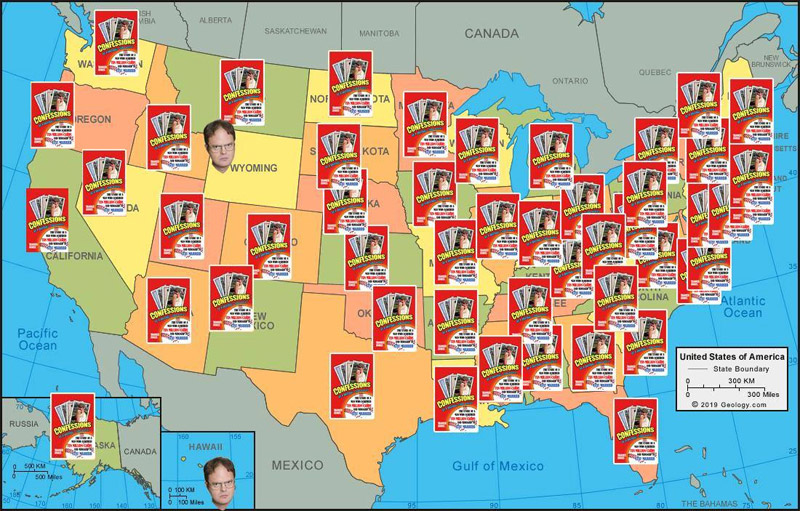 This year, I have dabbled in (and have been having a blast with) graded vintage, graded key comic books and other things.  More recently though, the nostalgia bug has bit me hard.  All of a sudden, I’m into NES video games, Voltron and Transformers.  What the heck is going on?  I think it has got to be all of these nostalgic feelings of Christmas past.  Raise your hand if this was a HUGE part of your childhood …

Even if not, you may identify with various other video games.  These three were my absolute favorite, so I picked them up and they are all in very nice condition.    I remember crossing my fingers as a kid, hoping that the latest NES Super Mario was under the tree, and the feeling of pure excitement when I found out it was.  When I picked these up again over the past few months, I began to notice something really cool – they seem very photogenic when matched with various wax boxes from around the same time period that they were released!  Check it out:

Are you kidding me? 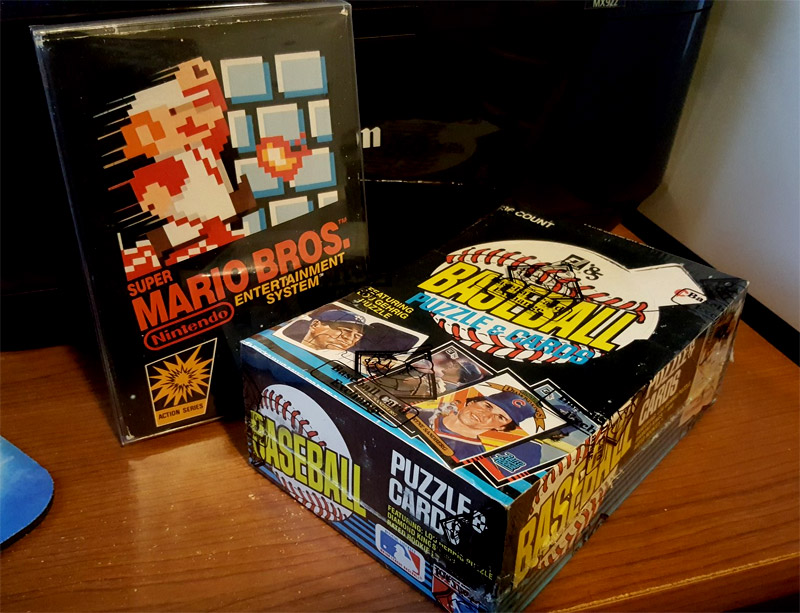 How was 1989 Topps not released with Super Mario Bros 2? 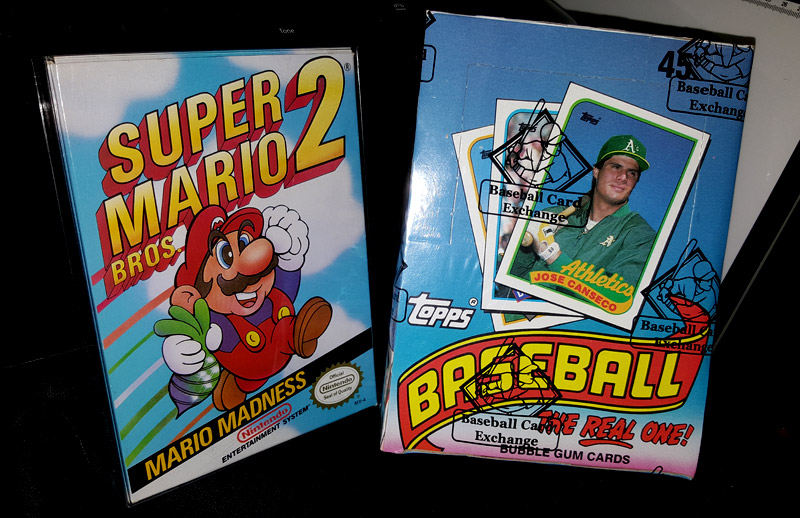 GAAHHH all of this bright yellow just makes me melt. 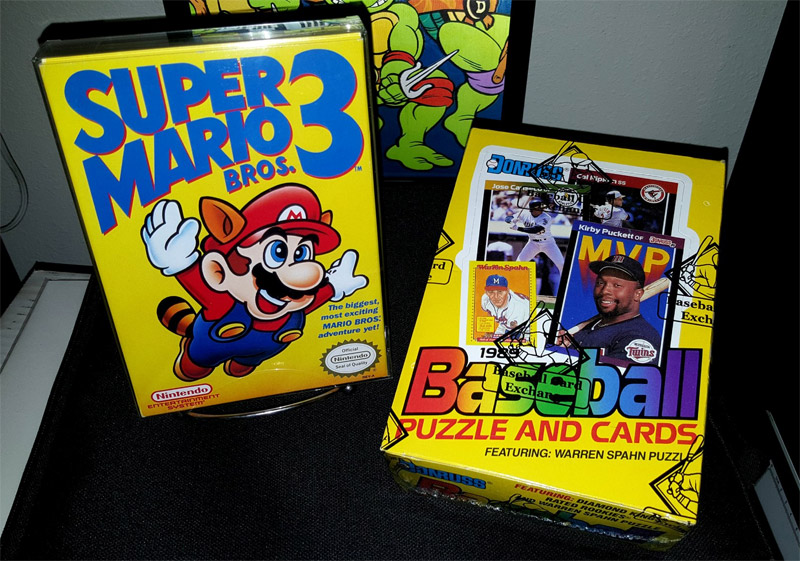 Is it just me, or is that ridiculously awesome?!  Christmas inspired me to create a few of my latest customs, as well!  You may have seen these first two before, but I was able to do some fun customs with junk mail… 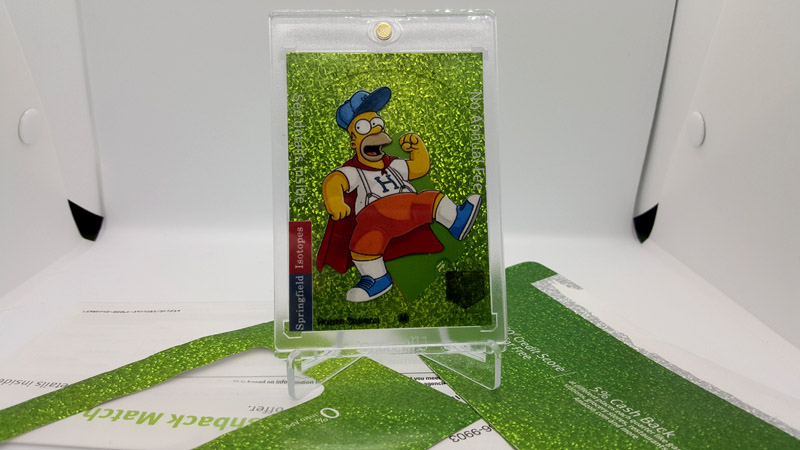 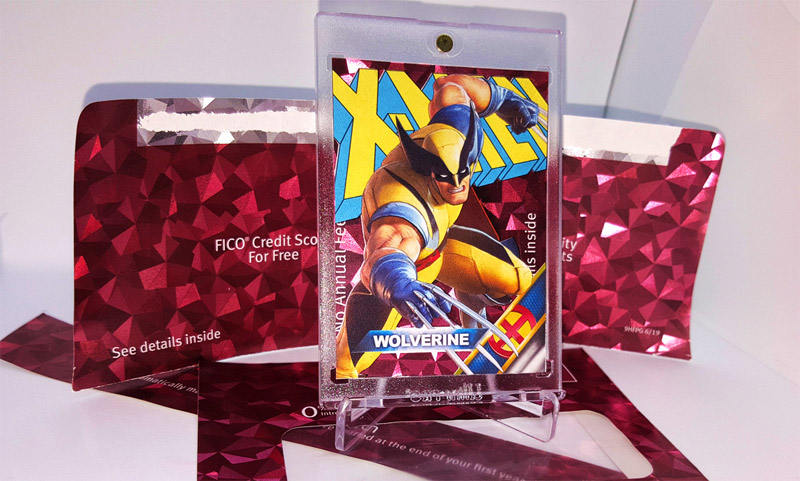 I guess I’m just drawn to shiny & sparkly things.  I’ve been known to find a sparkly toothpaste box or mouthwash bottle in the store, and post a short video of its shine on social media.  Most recently, a Christmas gift bag caught my eye.  I took a short video of it, and found that it was similar to the material of an atomic refractor … or cracked ice, if you prefer. 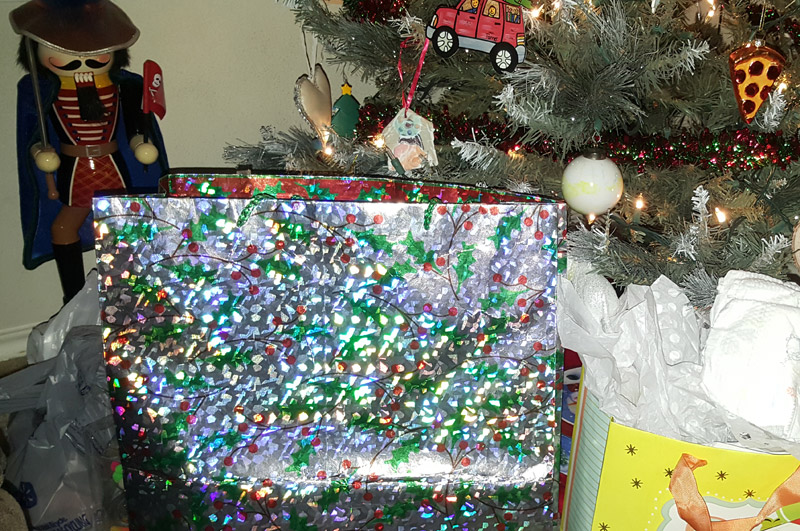 After apologizing to my dog Katy for having to cut up the gift bag that contained her presents, I got to work.  Topps did such a great job with holiday cards this year – I am in love with their “game-used” Santa hat relics!  I thought this bag might be a good way to do something similar.  I thought long and hard about what I wanted to make, and then it hit me.  Elf!

Elf is a movie we see each and every year.  It is a tradition of ours to watch, so it just made sense! 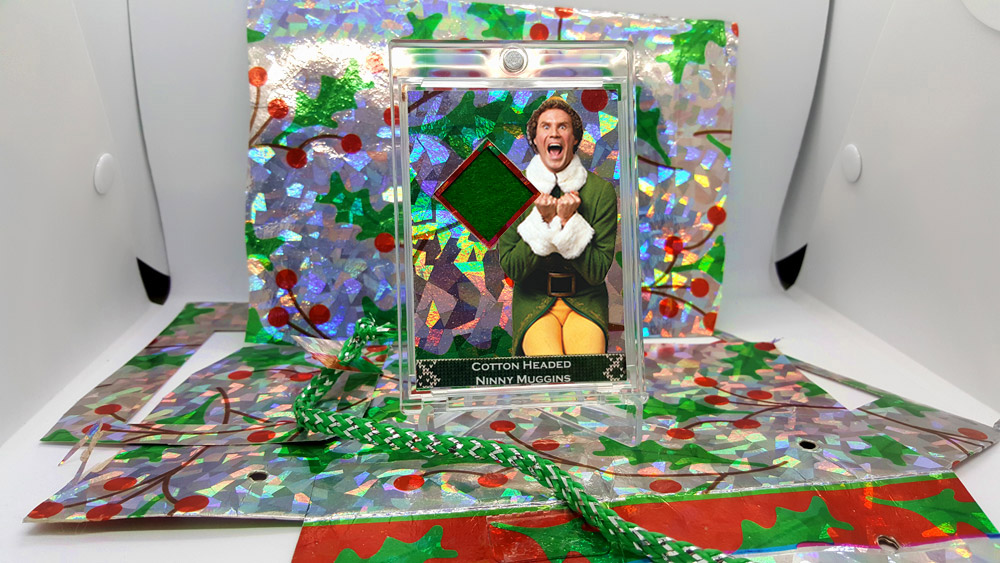 The sparkly red border around the relic was actually hand-constructed using parts of the bottom of the gift bag, and shines really nicely.  I think it offsets the relic itself quite well.  Speaking of the relic, it is actually green felt that was left over from a project I did a while back which required me to cut real playing cards, create a collectible poker chip, and use the felt so the cut up playing cards looked like they were on a poker table. 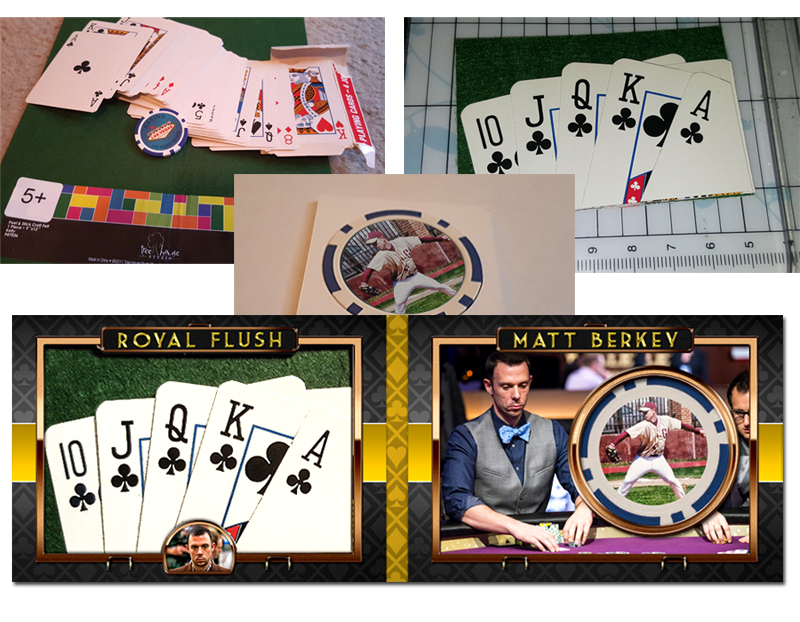 Speaking of customs I did a while back, doing my three part video series on my current Canseco collection allowed me to fall in love with my Canseco customs all over again.  Here are a few I created a while back – they are all dual relic cards, where the relics are wax pack wrappers and bubblegum from the packs.  They are in one touch holders, and sealed with wax wrappers as well!  These were inspired by a custom that I saw years ago from someone else.  I loved the idea so much, that I just had to do something similar and take it a bit further. 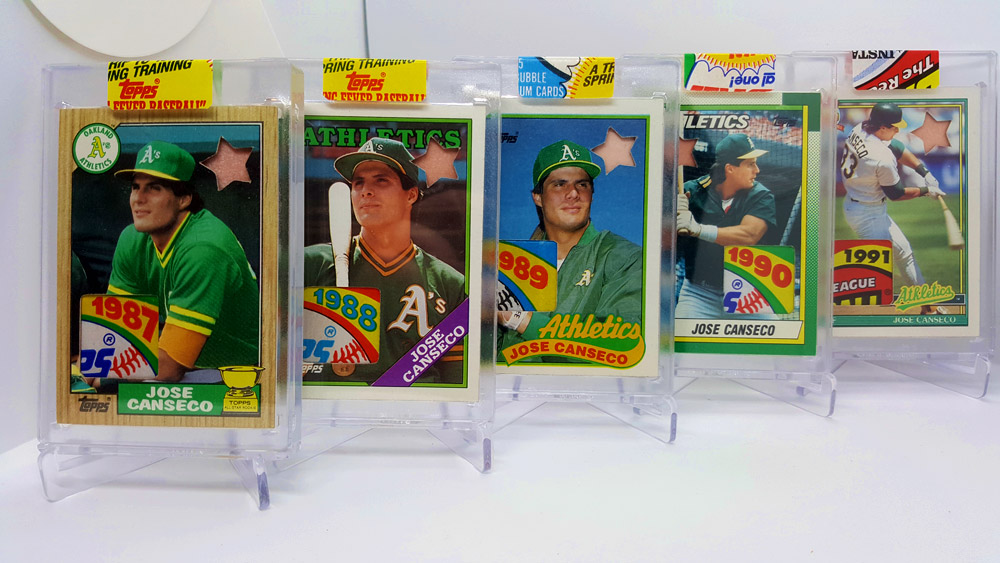 When you look at the wax/gum relic cards above, and the gift bag / junk mail cards below, it is funny to think that these cards are quite literally all made of stuff that would be going in the garbage.  You heard it hear first – apparently, I collect trash!

Earlier this year, I was commissioned to create a few customs of someone’s kiddos using game used pieces, which they would sign later. 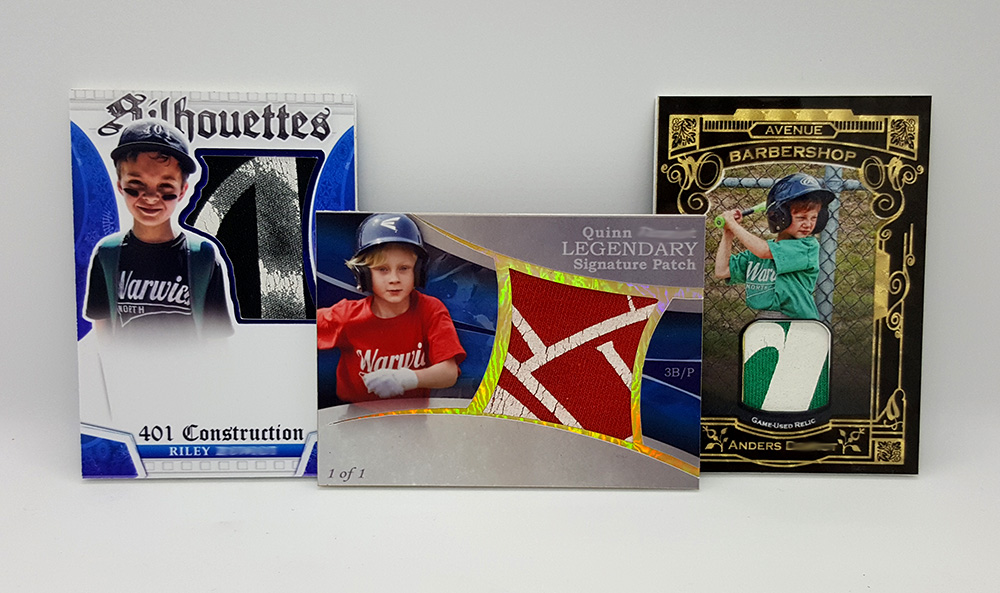 This actually ended up working into an even bigger deal that involved a bat barrel.  The barrel, along with a few other cards was used to bring my favorite bat barrel back home 🙂  I’ve had five other bat barrel cards of Canseco – in fact, all others were Topps licensed cards.  While they were all ridiculously insane, I choose this one as my favorite, because of all the gold holographic foil – simply put, in hand, it made me smile more than the others.  (I like shiny things, remember?) 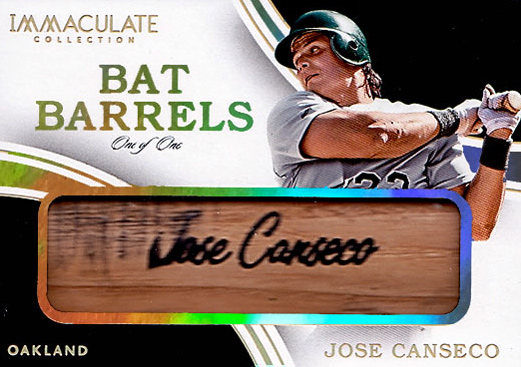 After selling it, this card bounced all over the United States to finally end up back in my collection.  That makes it so much more enjoyable for me, because of its story and travels!  I would have never guessed I would have been able to have gotten a barrel back in my collection – so soon, at least.  Thanks to some customs and multiple intense trading sections, it all worked out!

Earlier this year, I put together a jumbo custom of Andrew McCutchen featuring a rather “controversial” relic.  The card featured one of his dreadlocks.  I posted pictures before it was signed, and it was met with mixed reviews.  Half the people loved it and half the people thought it was the creepiest thing ever.  Well, it finally got signed – and Cutch loved it!

Here it is with its new ink! 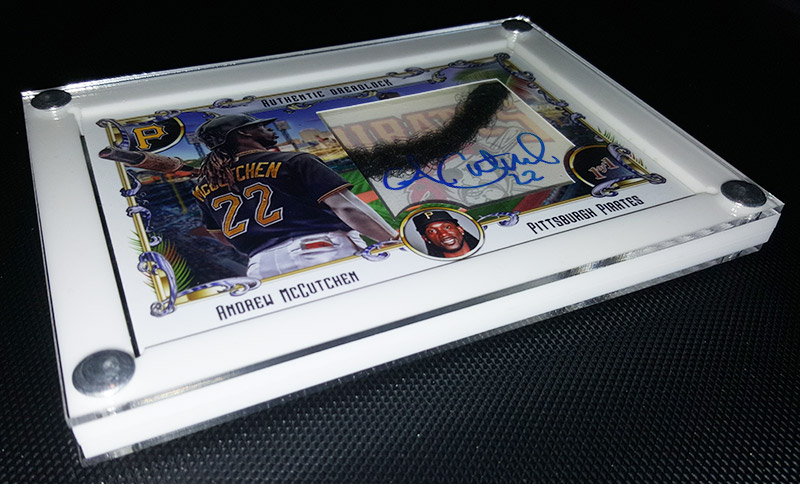 Speaking of hair customs, I did one as a present for Holly, depicting our favorite “pickup” of 2019 🙂  This jumbo features hair from Beckett’s first haircut.  I did the artwork in such a way that it makes the hair look like it is in Christmas ornaments on our tree.  Don’t tell Holly though – she hasn’t seen it yet, so SHHH! 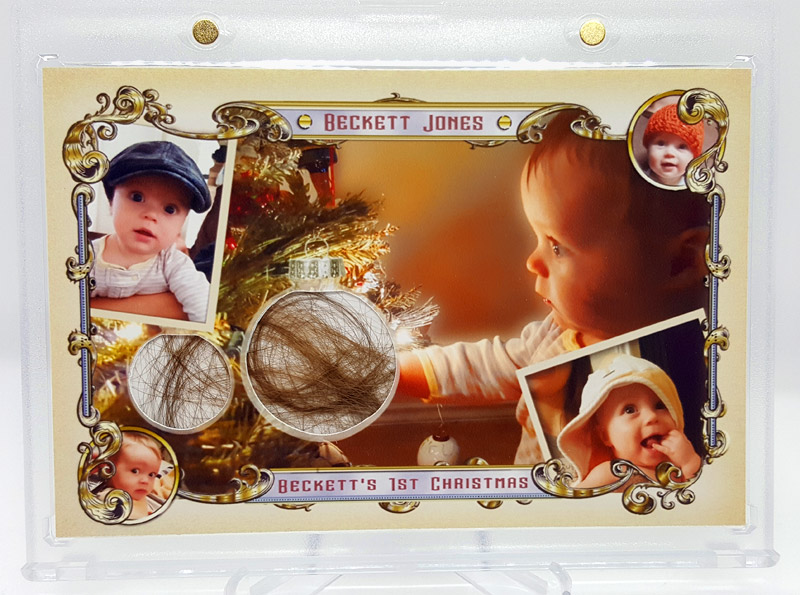 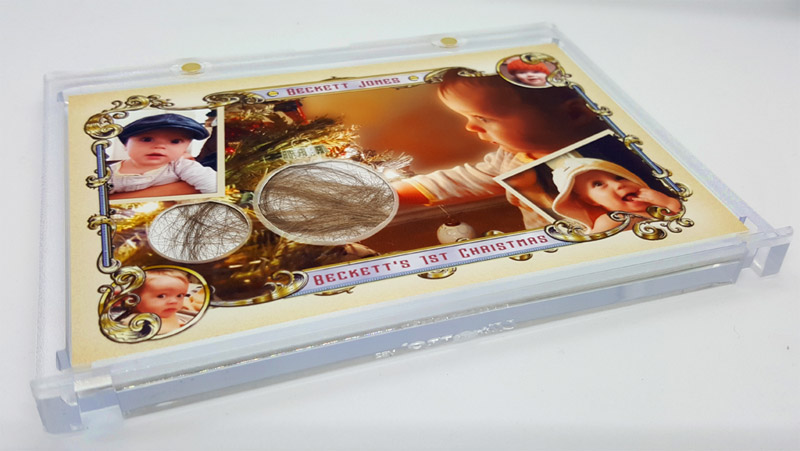 With Christmas coming super fast, I guess I better wrap up this article and get busy doing what needs to be done.  I still can’t believe it is only a few days away, but I’ll tell you what – with this new nostalgia kick I’m on, I’ve asked for a GX-71 Voltron, a G1 Transformers Devastator combiner set and some 1991 Donruss wax boxes.  I’m fairly certain I’m getting them, too – after all, I did order them for myself and had Holly wrap them for me.  🙂

In spite of that, I have to say – I’m more excited for Christmas morning this year than I have been in years!  I guess asking for toys for Christmas further cements my legacy as a big nerd … as if loving baseball cards didn’t already.  Stay tuned to my social media for pictures of dinobots posing with various Jose Canseco cards 🙂