PC Holy Grail Alert! When you find a card with a piece of your childhood inside it!

(A video is at the bottom of this article!)

If you are like me, you are in the hobby of collecting baseball cards as an adult because you were in it initially as a child.  You may have experienced something you perceived as truly magical in the game of baseball as a child, be it a team, player or game.  Having a memento of sorts, like baseball cards made you feel like you were a part of the game – like you owned something significant.  Opening packs of the new card company Score from 1988 was a thrill.  If you were a Giants fan, you would be excited about a 1989 Topps pack yielding a Will Clark, Kevin Mitchell, Jose Uribe (yes, even before his 1990 Fleer card skyrocketed to a million bucks!) or Matt Williams.  If you loved the 1986 Mets, pulling a player like Strawberry, Gooden or Carter from a pack, it would be considered a win.  The 80s and 90s both were filled with baseball jersey-wearing heroes.  Kevin Mitchell’s bare-handed catch, Bo Jackson running up the wall, Roger Clemens striking out 20 in a game – all of us current collectors *just might* be able to trace our collecting roots back to a single instance in baseball history!

For me, the event was the 1989 World Series, and the team that excited me to no end was the 1989 Oakland Athletics, most notably of course, Jose Canseco.  In 1989, it seemed as though there was nothing the A’s couldn’t do.  It appeared as though they had a monopoly on winning.  For this 9 year old boy, it was something that was sorely needed.  Back then, my life was extremely turbulent for many reasons, and baseball really helped me through some difficult times.  There was something special about that Oakland team – something captivating.  When the World Series came along, I forgot all of my troubles, and followed along each game with white-hot intensity.

Known as the earthquake series, the 1989 Fall Classic (also known as the Battle of the Bay) game three was delayed for several days due to a quake that rocked California.  I remember it very clearly – the television was on, and the Giants were parading out the greats of Giants past.  Willie Mays showed up on screen, and then everything went crazy.  Even though we lived hours away, we felt our house shake, too. 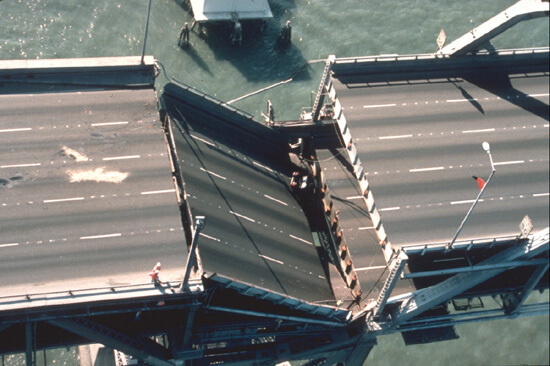 The rest, as they say, is history.  The A’s went on to sweep the Giants, and the 1989 Oakland Athletics were immortalized as one of baseball history’s premiere powerhouse teams, winning their first World Series since 1974 – something they haven’t done since.  After losing the 1990 World Series to the Reds, The A’s became a shadow of their former dominant selves, eventually losing nearly every key piece of their team within the next few years.

When I came back to the hobby, the thing that lured me back in was probably what lured you back in – nostalgia.  Not just for the game, but for the cards of my youth as well.  It wasn’t too long before I graduated from junk wax collecting on a nostalgic dime, to discovering the shiny new cards that were being pumped out by card makers.  Forgive the expression, but it was clearly a whole new ballgame.

I think as we continue in our hobby journey, we still carry that nostalgic drive within all of us, but it can sometimes be minimized, if not forgotten, by our drive to capture the next new shiny thing.  Card makers have seen how important nostalgia is, and continue to create cards of our heroes from yesteryear.

Not completely satisfied (and perhaps frazzled at the price discrepancy between the cardboard of my childhood and now) I began creating my own cards.  If you have been following along with what I have been doing over the past several years, you have likely seen a number of my creations.  These creations were an attempt to artfully capture the nostalgia I felt for my favorite player and the most impactful event in baseball for me, the ’89 World Series.

Though Jose had a banner year in 1988 becoming the first 40/40 member, I wasn’t even into baseball yet.  Still, I created a custom of him commemorating it, with a game used bat piece and his signature. 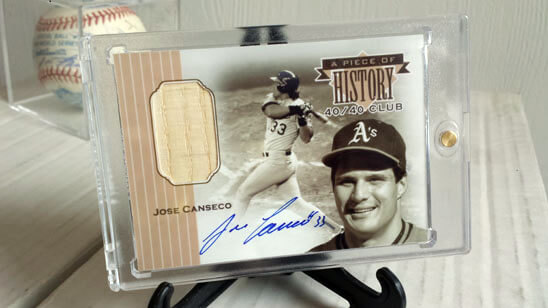 While at his house, I had him sign another custom I created, though this time in red ink.  This card features a cut foil photograph of the scene after the earthquake hit. 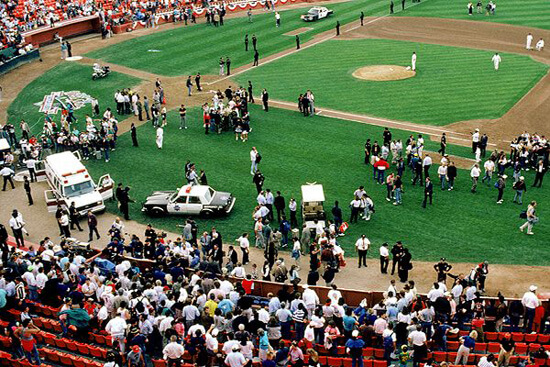 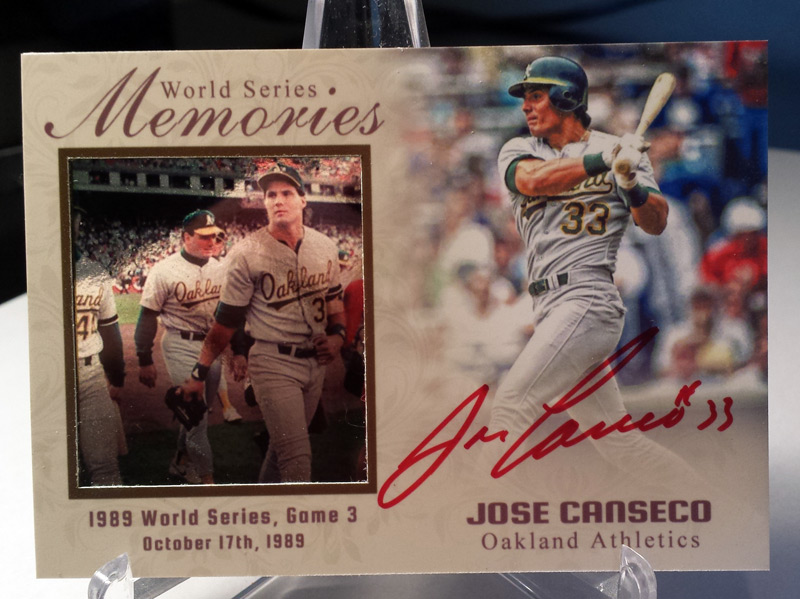 Eventually, I created something to encompass the members of the team that meant the most to me, buy doing a jumbo cut 12x signature booklet.  I did it by taking these: 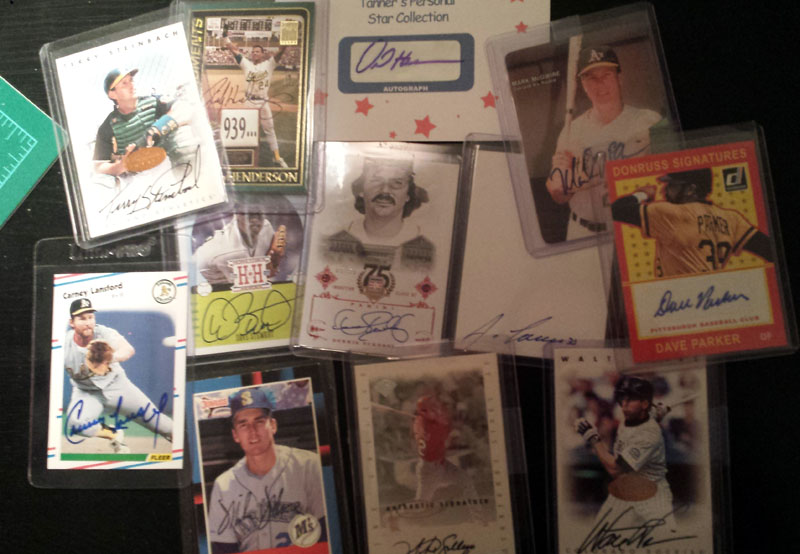 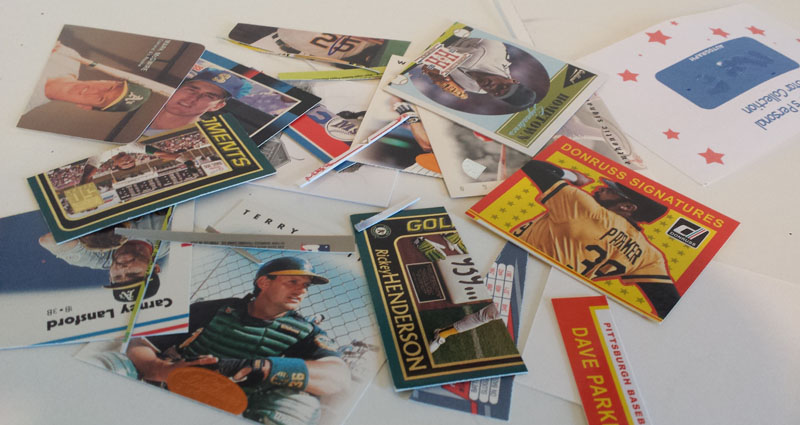 The front features the starter of Game 1 and MVP of the series, Dave Stewart 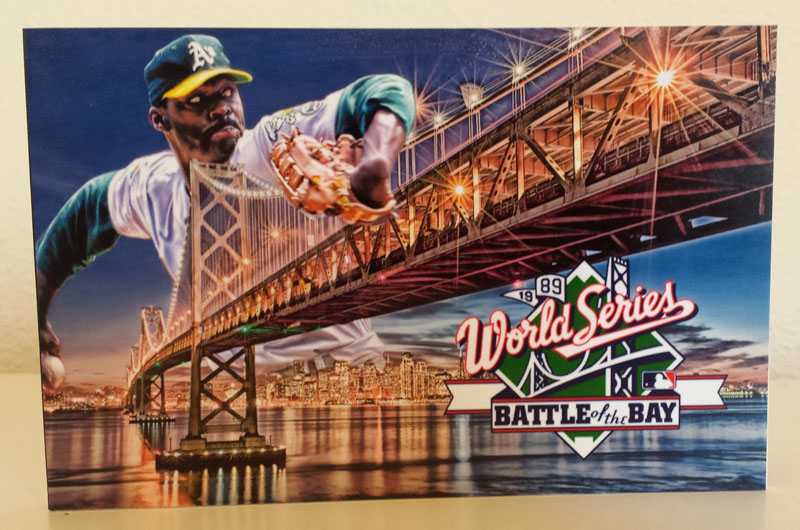 and the back features the man who closed it up, Eck. 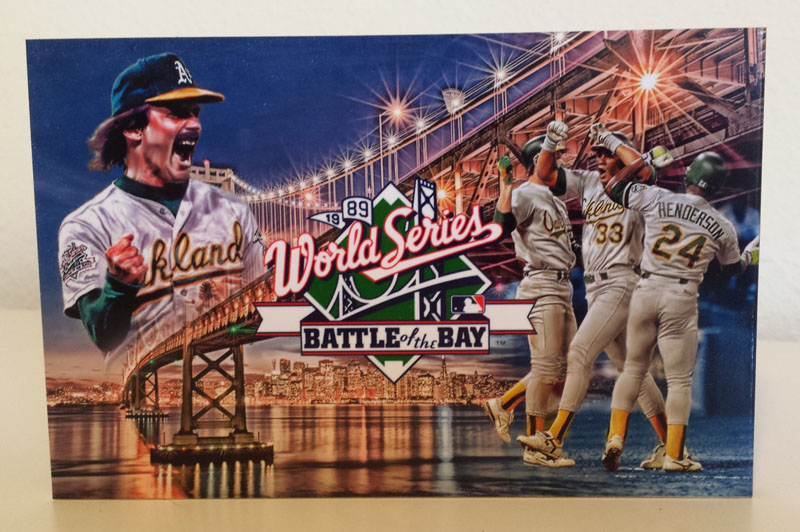 To me, the pinnacle of collecting would be to have a card with a World Series patch from Canseco, so I had plans on creating one with a “player worn” 1989 World Series replica patch.  Here it is: 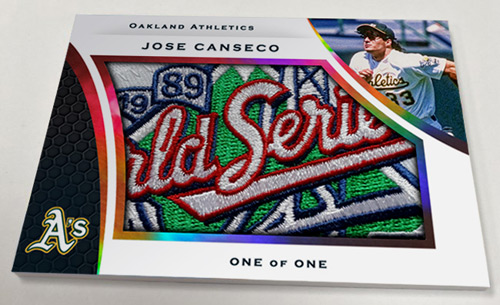 As you can see, these were attempts at commemorating and creating the single most impactful event for me in baseball history by capturing it on one of the most important things for me:  a baseball card.  While I enjoy the pieces I put together above, what was posted up for sale on the 4th of July stopped me dead in my tracks. 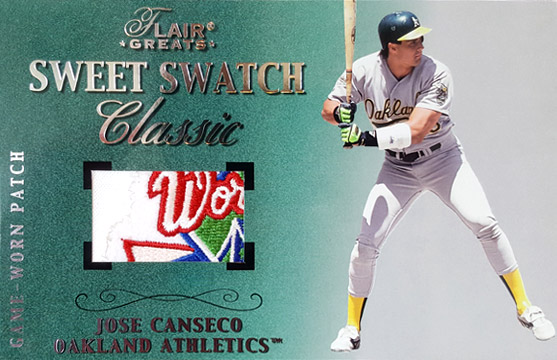 Y’all, I clicked buy it now so fast, my brain didn’t even have time to think.  A baseball card with a REAL game used relic from my favorite baseball player in the most important moment of my childhood fandom.  A 1989 World Series patch is the most significant patch Jose has ever worn – I simply don’t think it can get any better than this for me, based upon what is available.  It is like a piece of my childhood has been enshrined into a jumbo baseball card.  It is crazy to think that a 9 year old version of myself, wide-eyed with wonder, watching the 1989 World Series saw the very patch that this piece is from several times on television.

For those that don’t know the size of this card, check it out next to a jumbo patch on a Dynasty card.  The patch is definitely a nice size!  Ironically enough, the picture on the Sweet Spot depicts Jose wearing a 25th Anniversary patch on his sleeve – just like my Dynasty card has 🙂 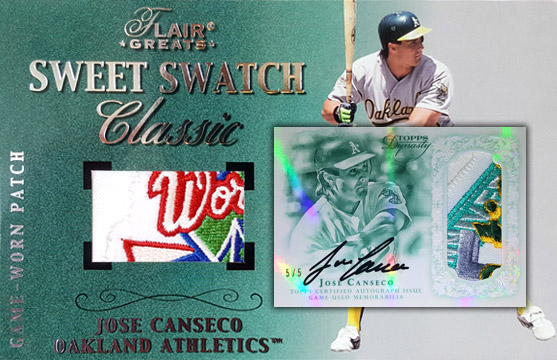 After I clicked buy it now, I had concerns about its authenticity.  I mean, this is the World Series of patches … literally!  After a ridiculous amount of research, I was relieved to find that it is, in fact real.  At least, based upon what I could surmise online without actually having the card in hand.  While it was en route to me, this card has been on my mind a lot.  When it came in today, I nervously ripped into the package and carefully examined the card.  Thankfully, I found absolutely no evidence of tampering!  Here is a picture of my game used ’89 World Series team signed baseball with the card.  A fine pair, if I do say so myself! 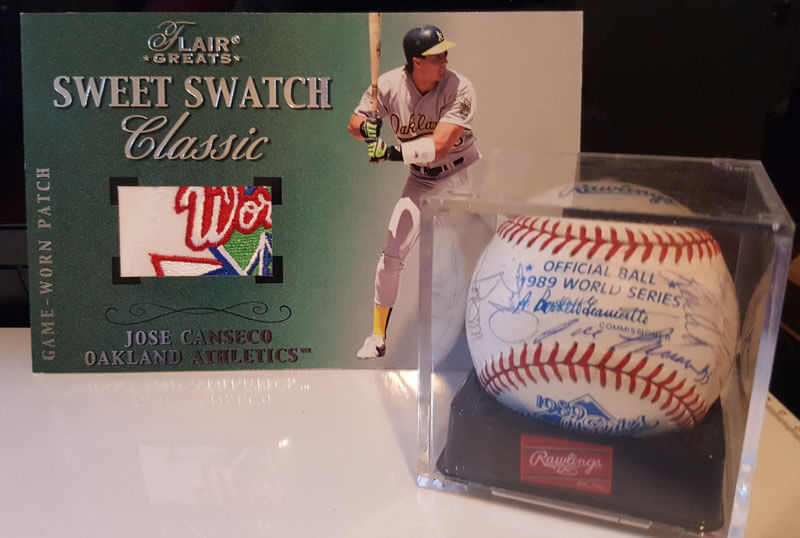 Needless to say, this card is a holy grail piece to me.  It isn’t every day that I find an item with a tangible piece of nostalgia from the favorite part of my childhood – especially from the very World Series that remains the most important part of baseball history to me.

Now, if I could only find a nice holder that this will fit in 🙂