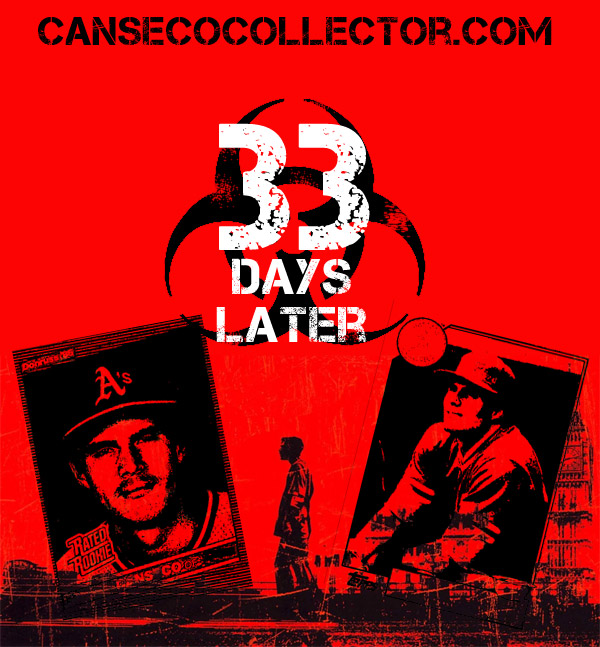 Part of me wanted to give a daily update on how things were going, but frankly, it has been a whirlwind since I announced my retirement on June 30th.  The massive amount of time I used to spend obsessively checking eBay, the forums and social media for Canseco cards I didn’t have, has not been replaced with naps and leisurely lounging poolside.  No, it has been replaced with quoting prices, accepting payments, pulling cards, packing them up, driving to USPS and ghosting them from the website.  I have just crossed the one month mark a few days ago of not collecting Canseco, so I figured this would be fitting for an update.  The good news is that I’ve moved about 1,000 cards.  That still, however, leaves over 4,000 to go!

Retiring from supercollecting has NOT been sad or gut-wrenching.

If you are fearful of moving on, take it from me.  I don’t know if anyone else has been more passionate about collecting than I have, yet I can sit here right now and truthfully tell you it hasn’t been sad at all.  In fact, it has been fun telling stories behind the cards of those who are interested in certain items.  In spite of the work it takes, I have enjoyed filling want lists from cards I have long since forgotten about.

A LOT of people can connect with my story

I cannot begin to tell you how many people have reached out telling me they are in the same boat as I was.  I want our hobby and community to not only survive, but thrive.  Doing so means being responsible with purchases.   What that may look like for many is a $50/mo budget for for cardboard, instead of $1,500 over the course of three weeks and burning out, never to return again.

There are more than ten people who care about collecting Canseco.  A lot more.
I had no idea of all the people who collect Jose.  It has been cool to “meet” them, and help them along in their collections.  I have been quite shocked at the number of folks who have come out of the woodwork picking up super rare Canseco cards that I thought only ten or so people would care about.  It has been fun to see so many collectors who do not necessarily have a strong online presence, yet have super strong collections.

Some people can be cruel…

There are a few folks out there who have felt the need to express their displeasure in what I say, how I say it and how often.  While it is behind the guise of “simply stating their opinion”, it is oftentimes venomous, mocking and unpleasant to read.  If it bothers them so much, can’t they just ignore it and scroll … oh, I don’t know … an 1/8th of an inch down the page?  Why *anyone* would desire to bring in unwarranted negativity to someone’s doorstep is beyond me.  That’s the nature of the beast, though, I guess.  One podcast went off on me in a profanity-laced tirade about me for several minutes splicing in sound clips from my Youtube video.   You would have thought I ran over his dog and laughed at him afterwards or something.  If there is a takeaway from this experience for me, it is this:  Always be kind to one another; you never know what season someone is going through and how your words will affect them.  Sacrificing kindness for cleverness or popularity reflects very poorly on you.

…but most people are not
Overwhelmingly though, the vast majority of feedback and support I have received has been very positive.  It has probably been my favorite part about this whole experience.  I’ve had a number of people send me money asking me to surprise them with a card from my collection (appropriately priced, of course!)  Many have also asked me for a signed COA stating that the purchase of cards came from my collection.  I can’t tell you how cool I think that is!  To know there are people out there who care enough to have documentation that something of mine is in their collection.  Others have asked me to print out and sign articles I’ve written in the past that they liked.  Please do not think this is all going to my head – it is not.  Any type of ego boost this may potentially cause is *firmly* countered by the sound I hear of my wife’s eyes rolling in the back of her head whenever I tell her this stuff.  🙂

Before I got into supercollecting, I had absolutely no idea there was such thing as competition, rivalries, etc.  I recall reading from supercollectors about their competition, and thought it was the weirdest thing ever.  Isn’t there enough cardboard to go around for everyone?  Well … I’m here to tell you when it comes to supercollecting, no.  There isn’t enough cardboard to go around and it can get ugly.  I don’t desire to have anyone dislike me, so it has been fun to get to know my former competitors not as rivals, but just as fellow collectors.  There has been no reason to hold my cards close to my chest, figuratively speaking, and it has been fun just talking to my former “enemies” on a friendly level and genuinely enjoy sharing stories about our cardboard conquests – to become an ally to help them in their collections instead of a roadblock.

About the book.
While I am SUPER excited about releasing my book, I have been unable to focus on it, but hope to complete it this month or next.  I know that is a big gap, but it wasn’t too long ago when I was saying I wanted to wrap it up in a week.  Between work and shipping out nearly 1,000 cards all over the world, it has been difficult to focus.  I’m trying hard, but I also don’t want to rush it.  Stay tuned!  If all goes well, I hope to have a small surprise for anyone who picks up a copy 🙂

All in all, my life has definitely changed for the better over these past 33 days.  The embarrassingly oversized mailbox I installed for countless hefty mail days is now being used to send glorious cardboard out into the world.  While getting mail is no longer something I look forward to, it is also not something I am anxious about.  There are no more worries about the mailman leaving a $500 card on my doorstep.  (Yes, that HAS happened.)

Another thing – If you were to ask my wife about her main pet peeve for me, it wouldn’t have been my collection; she has always been apathetic about it – her pet peeve for me would have been my phone.  I don’t typically go anywhere without it.  To the store?  My phone would be with me.  The kitchen?  My phone would be with me.  The bathroom?  C’mon, what do you expect me to do?  Read the back of a shampoo bottle?  Today, I did the unthinkable.  We went bowling during lunch (we do this as a family ever so often) and – get this – I left my phone at home…and I didn’t even care!  To be fair, I’ve always been like this though, as evidenced by this comic strip of us made before I got into collecting (this is spot on!) 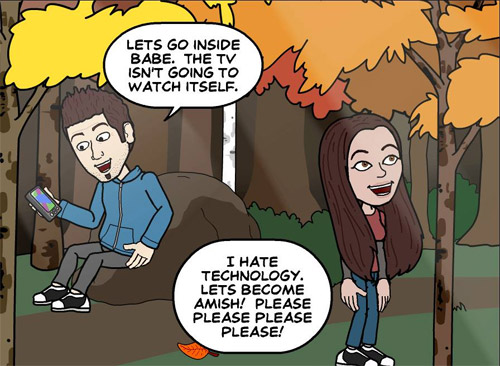 While I’ve always had my phone glued to my hand, I’ll admit supercollecting kicked it into hyper drive.  So, with all that said, I’ve just begun this journey from recovering supercollector but it has been mostly good & positive.  I have a lot more cardboard to sling, but I’m enjoying the time going through them and telling the stories behind them.

Ready to pick up some Canseco goodness?  Head on over to www.CansecoCollector.com and let me know what you like by emailing me tanmanbaseballfan@gmail.com !