Today I turn 38.  For those of you who are adults, you probably remember growing up thinking MAN!  There are people my age playing major league baseball now!  A decade further, you think DANG!  This rookie crop is a DECADE younger than I am!  10 years later, you desperately look up and down the active rosters to see ANY familiar name from when you were younger.

Thank you for still being around, Bartolo Colon.

Ken Griffey Jr., Chipper Jones, Derek Jeter, Alex Rodriguez, Frank Thomas … all are long gone.  At 38, not only is that one step closer to 40; it is also the year AFTER Canseco “retired” from baseball.  Yes, at 37 years of age, Jose was out of baseball.  That means at my age, my favorite player never played another MLB game.  Heck, I’m STILL having a hard time believing guys like Harper, Stanton, Strasburg and Trout are bonafide veterans.  I saw Lincecum pitch the other day in a minor league stint … it was surreal watching him struggle – it seems like yesterday he was such a dominant force in the majors! 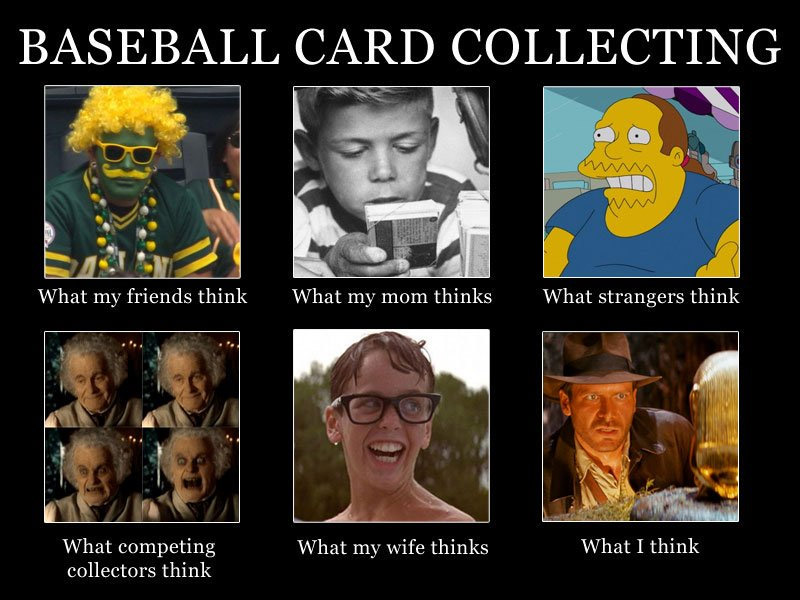 I guess that is one thing about baseball though.  I can always use them to date things in my life with this game – or more specifically, baseball cards.

2018 has been a bit rough for us.  The last time I wrote, and i mean REALLY wrote something was back in February when our dog Dewey passed away.  Since then, minor things like work, water coming through the our ceiling due to a rusty a/c drip pan and a dead water heater have taken up a lot of my time.  Not to mention my near-death experience with bringing said water heater into our attic.  The worst thing has been seeing my dad go through so many medical problems.  He has been on several ambulance rides this year and a few of them have said he was lucky he came in when he did.  On top of all that, he slipped and broke his hip the other day – definitely NOT something someone in his condition needs!  Would you please pray for him?  Here is a pic of me and dad, a *few* years ago on my birthday. 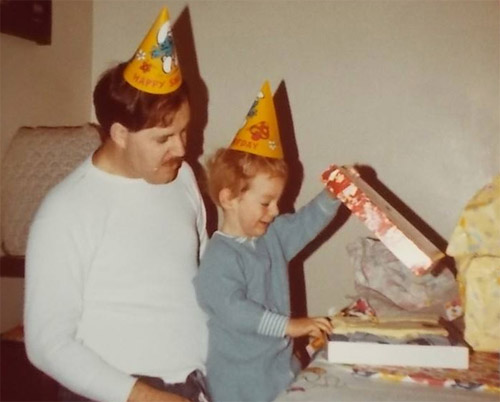 SOOOO, with all that said, it is my birthday so I decided to engage in one of the things I like to do best: write!  That, and connect with you all out there on the interwebs.  With all the bad stuff going on this year, I have a lot to be thankful for.  Plus, I figured I’d show off some of my latest work 🙂  Someone wrote this to me the other day … 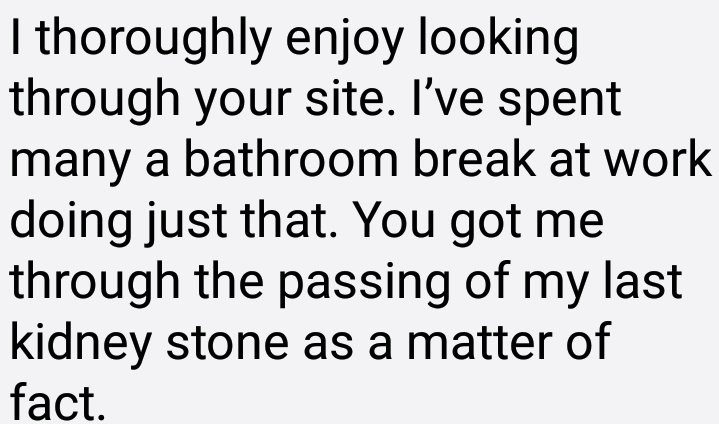 At least someone enjoys my writing!

One good thing that has happened for us is we have a new member of the family.  Meet:  Q 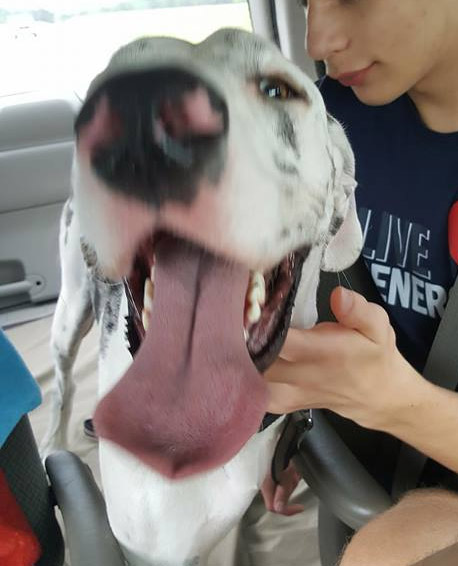 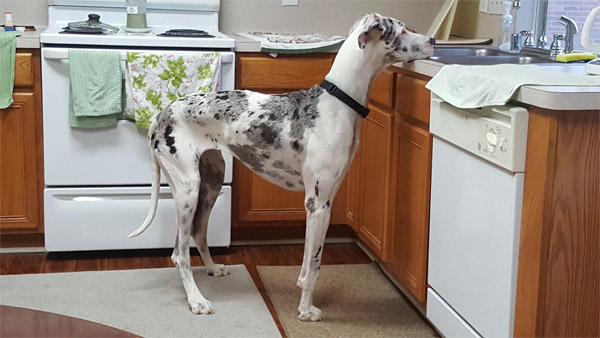 Earlier this year before we got her, she broke her toe, which ended up getting horribly infected somehow, which, in turn, caused her to have to get her entire front left leg amputated.  My hope is that she can one day feel like she can feel comfortable & free here at home. 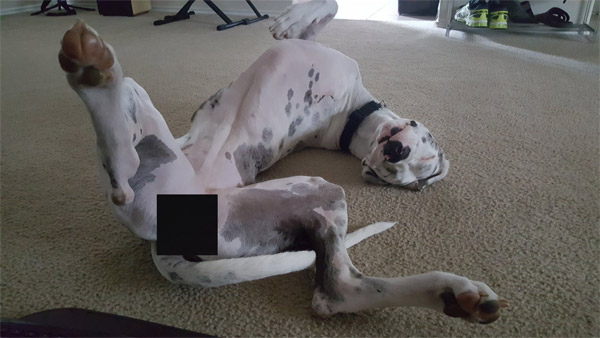 We also had a Psych party recently – yes, it took us months, but we FINALLY were able to watch the movie with some friends.  We also made a true Psych fan out of our son as well 🙂 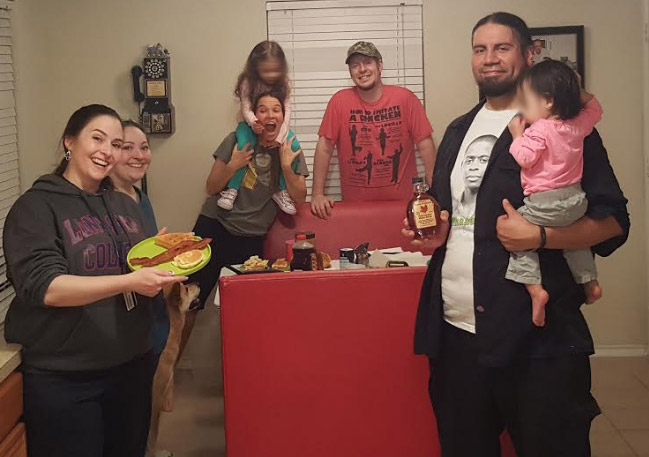 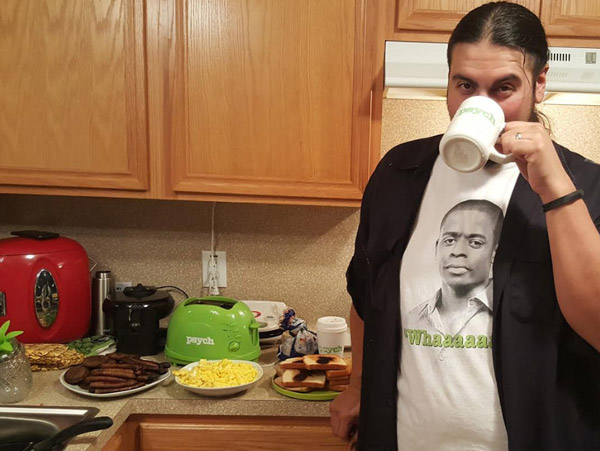 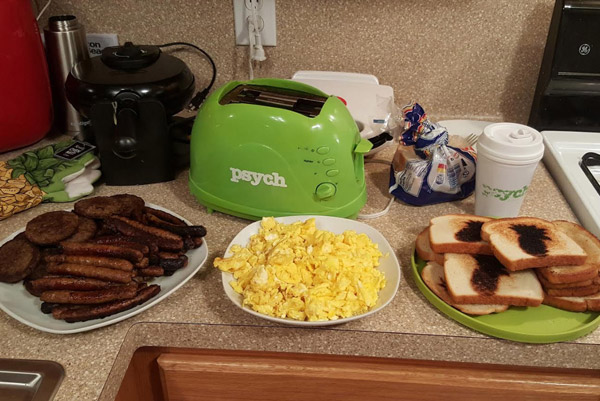 My son also said he wanted to learn how to play the bass to be on the worship team in his youth group, so he bought one with his own money and I taught him how to play.  He played his first Sunday last week.  I’m so proud of him 🙂  Our nights have been filled with me practicing guitar, him practicing base and my wife practicing the keyboard (like … the computer keyboard, to move the chord sheets from google up and down for us.) 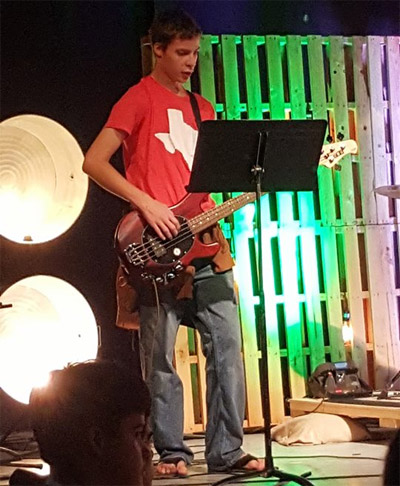 As for customs over the past few months … welp, I’ve done a few 🙂

Recently, someone who commissioned me to make some pieces for him a few years back wrote me.  This guy had an AMAZING collection.  Check out a few pics! 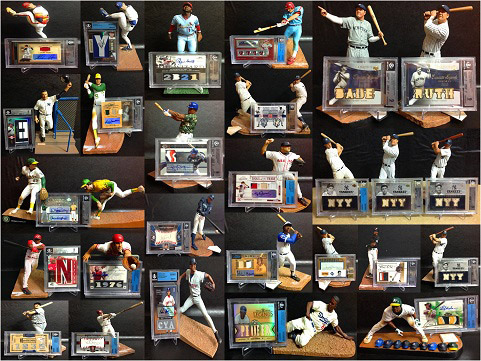 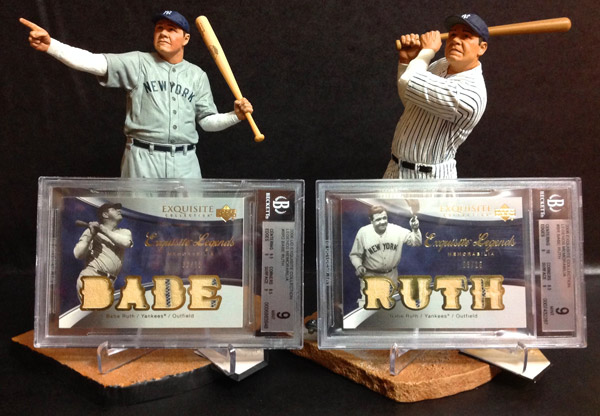 He had like an entire massive room with cards like this displayed in this manner.  It was truly impressive!  He wrote me the other day letting me know he has invested in this:  The Hands Free Popcorn Bucket.  So simple, yet brilliant!

He told me he sold his ENTIRE collection.  All the high end stuff is gone … except for the pieces I created 🙂  I feel honored! 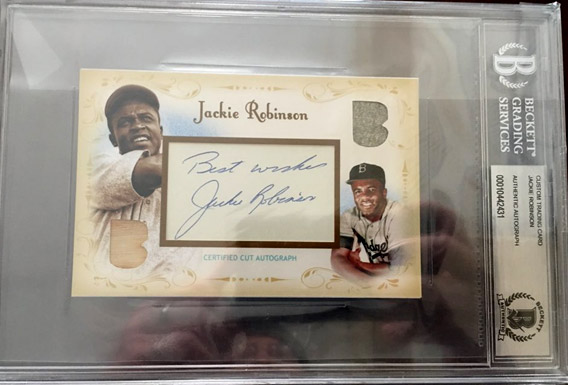 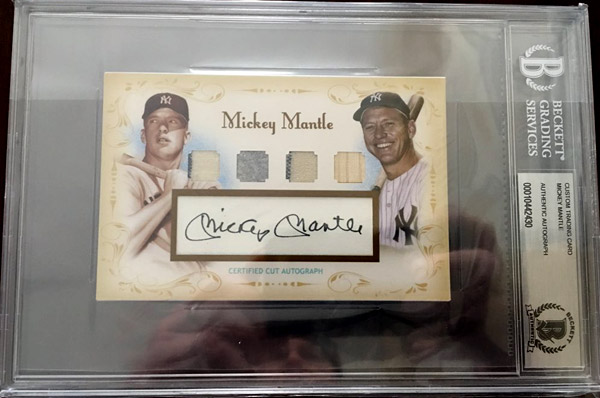 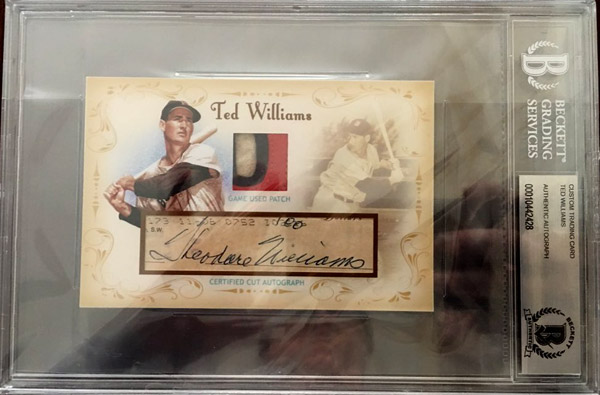 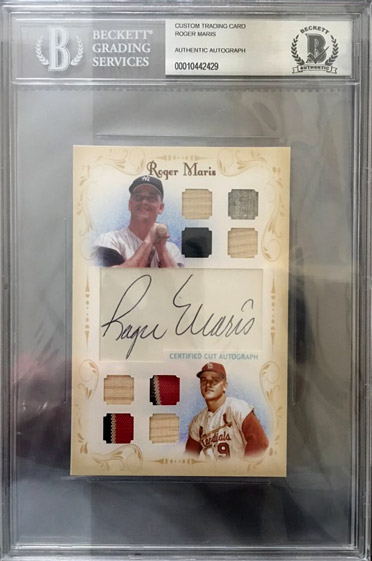 Gosh, I love how those look in the BGS holders!

Did I mention our new horse-dog has ups?

A few years ago, I was into TTM pretty hardcore and had the celebrities / athletes sign on a small sticker.  I would then create a card, peel the sticker autograph off and put it on my card.  Here is one of MMA legend Randy Couture.  You can see the index card I sent him in the background.  That is what I would use to mount the sticker on for them to sign. 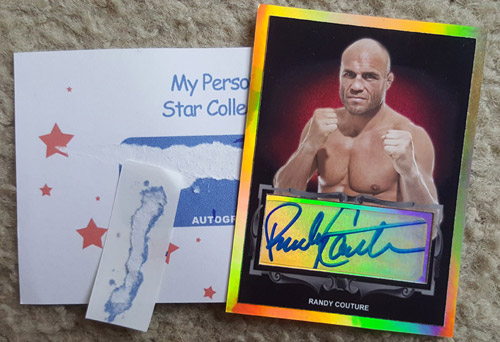 Here is a video showing me applying the sticker:

Here are a few others I did recently using some pieces and artwork someone sent me: 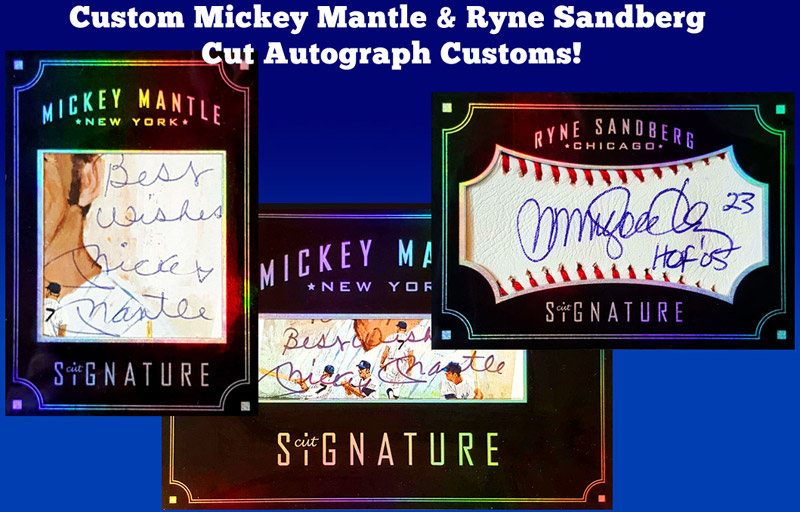 Brace yourselves, peeps!  This next one is … HOCKEY

Someone sent Connor McDavid a card to sign, and he signed it on the sleeve instead of the card. 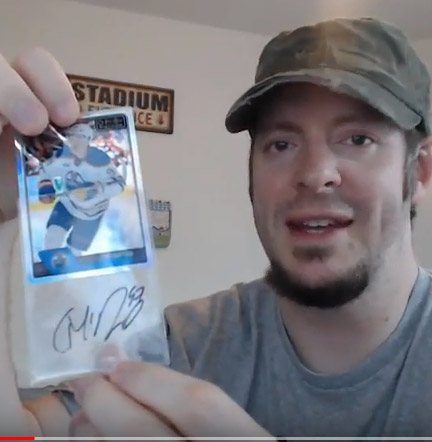 Here is what I made: 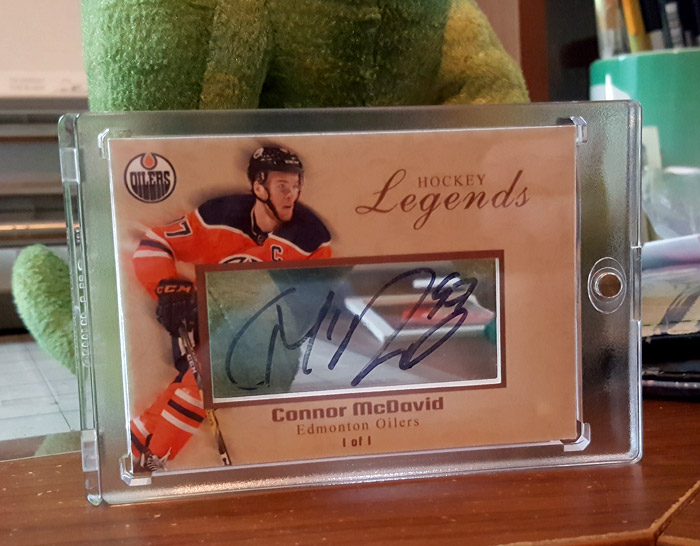 Here is a video of it!

Yesterday, I also wrapped up a Ted Williams custom.  Unfortunately, the first signature turned out to be a forgery: 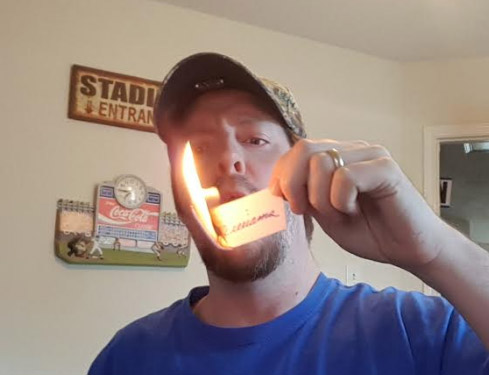 Here is what I did with the new authenticated signature and two game used jersey swatches: 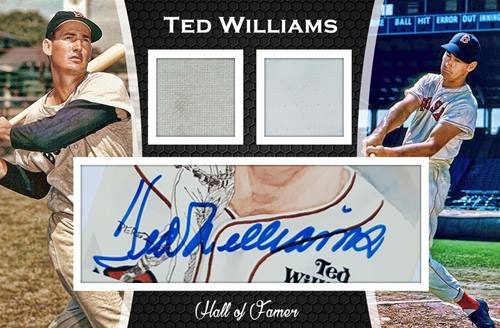 That is about all that I’ve done for customs – well, except for one booklet, but I promised the person I wouldn’t show it online yet, as it is supposed to be a birthday gift for someone, so it hasn’t come in yet.

Shifting gears into the collecting arena, well … this year has been very slow in terms of adding Canseco cards.  Let me say though – I’m PERFECTLY fine with that.  I’m happy for the breather, and that card companies haven’t flooded 2018 with tons more of Canseco’s stuff … yet, that is.  The break in the action definitely makes me appreciate the single cards that trickle in so much more.  Like this 2014 Tek Red Storm /10 auto.  Not a massive card, but I was very thankful to have it come in!  Each piece that comes in makes me very happy, and I’m very appreciative of the person who decided to dig into his collection to find the red storm for me!  Thank you again 81GamesCle! 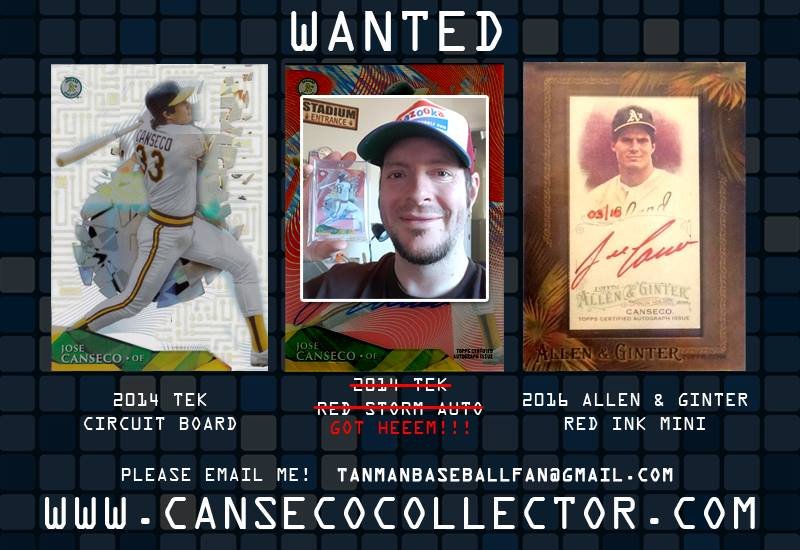 I’ve probably had more opportunities to talk about my collection rather than add to it.  The youtube clip below is the snippet from when I was on Beckett Radio with the Fat Packs (love those guys!)  Seriously, check them out – they are great!

Everyone knows me as the guy who ONLY collects Canseco.  I have also taken up a liking to unopened wax.   Particularly in the 1980-1992ish era.  I have so, so, so many memories wrapped up into these boxes.  Not just of breaking them, like I do 1991 Donruss, but also drooling over them on the dealer shelf like 1987 Fleer.  I’m trying to complete a run of them in BBCE authenticated FASC flavor.  FASC is a new term to me, by the way:  It means From A Sealed Case.  Here is my latest pickup!

A 1981 Topps Wax Box From a Sealed Case that has been authenticated and sealed by BBCE!  If anyone else has anything else in this vein, let me know!  I love the box artwork, the mystery, etc. far more than I do than the cards inside.  I’ve probably dealt with thousands of 1981 Topps cards, so I have no desire to have a pile of them on my desk. 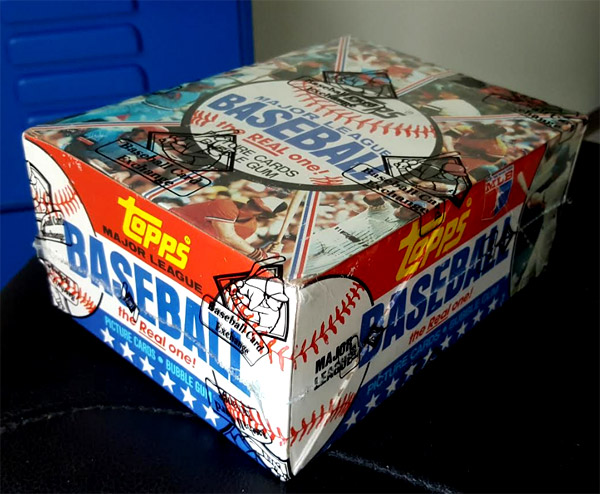 I feel like I have come full circle, in a sense.  When I got back into collecting a little over a decade ago, I made it a goal of mine to collect one set of everything from my birth year until when I quit collecting in 1993 or so.  I found excitement and intrigue in having a copy of every card from every major set growing up.  Shortly thereafter, I decided to sell it all and became a pseudo-dealer, making deals that totaled up to 10 million cards. Then, I got hardcore into collecting Canseco and now here I am.  Collecting wax boxes too.  Why?  Because memories of my childhood can almost be measured and dated by packs of baseball cards.

We had almost literally nothing noteworthy to “chase”.  No big hits to speak of.  Well, scratch that.  The 1990 Donruss Juan Gonzalez RevNeg was a pretty hot card 🙂  But no 1/1s, no autos, no jumbo patches, nothing.  Just pure, unadulterated neon red & yellow bordered cards, with hopes of pulling your favorite players … or your friend’s favorite players, so they would trade with you.  It was a MUCH simpler time for the hobby, and I miss it.  There was no f5’ing eBay to death waiting for the next card on your want list to pop up, no waiting for the latest checklist to hit.  None of that.  There was just you waiting for mom to come back from the store, hoping she had picked up a pack of 1989 Donruss and Score.  I guess that is why I am so enamored by these boxes at the moment.

On the way back from taking mom home from the hospital to visit dad, we had a good conversation about my childhood.  Growing up, life wasn’t easy, and mom always worried about how I perceived my childhood to be with everything that had happened.  I assured her that she and dad were great parents and not one time did I ever blame them for anything bad that happened.  She told me she was thankful to God for baseball cards, because she knew that would always cheer me up.

It was good therapy for me to hear this, too.  I always wondered to myself why I am so passionate about this hobby of ours.  I love our little community, get off the hook excited about landing a new Canseco I don’t have, and have a huge soft spot for the cards of my youth.  This obsession may not be understood by most, but I’m thankful that I can open up about all of this on my blog and the forums to people who “get it”.

As the big Four-O nears, I can’t say I’m looking forward to it, but I am super thankful to God for another year of life, a great wife and son, great parents and a great hobby community.  Thanks for reading guys and I hope you all have a GREAT day!