Fun Customs with some Jeter Signatures & a Replica Jersey

I’m not gonna lie, 2018 has been hard so far. On Christmas Eve, my dad was rushed to the hospital and literally JUST got out a little over a week ago. Through physical therapy, he is getting stronger, but it was a rough several weeks to start of 2018 for both him and my mom.  I will definitely say this cup is half full though, as it could have been much worse!  We are thankful he is back at home, finally.

Unfortunately, things didn’t go that way for our dog Dewey.  In the midst of a very tumultuous season in our lives, we decided to get my wife a dog 12 years ago.  We gave our son the option to keep his name Dewey or rename him Yoda.  He was insistent on keeping his name Dewey.  Ironically enough, I don’t know anyone who is more of a Star Wars geek than him!  Dewey pre-dates my son’s Star Wars obsession, and frankly, I can’t even recall of such a time.

Dewey was all of 16 pounds and scared of his own shadow.  In spite of us getting him for my wife, he was wholly attached to me.  Have you ever gotten that uncomfortable feeling that someone is watching you?  That was Dewey.  I would be watching TV, noticed something stationary out of the corner of my eye that seemed out of place – when I would look over, it would be him from across the room, perfectly still, just intently staring at me.  He was a funny dog. 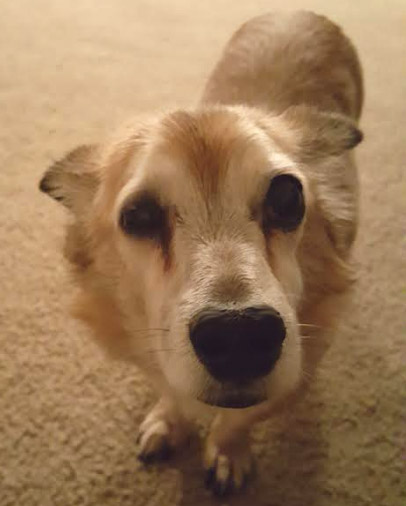 A few months ago, we noticed he had a lump under his jaw and took him in.  Sure enough, it was cancer.  Day by day, his breathing got more labored and his appetite was shrinking.  Keep in mind, I’m not the guy who has pictures of his dogs in his wallet, ready to show anyone he meets.  I’m not a guy who is prepared to call pets “fur babies” or introduce them as if they were our children.  No, to me – dogs are dogs.  Now, with that said – this affected me significantly more than I thought. 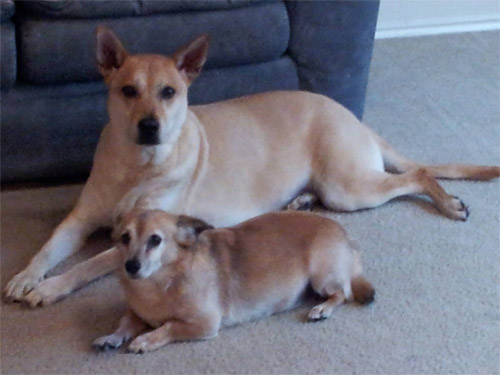 The day came to take him in to the vet to put him down.  I was a bit down, but not horribly depressed.  I knew it was going to happen for a while now.  The nurse came in and told me they would take my credit card now so I wouldn’t have to worry about paying after.  “Oh!” I thought.  That is a great idea so that way people who do see their pets as their children wouldn’t have to worry about it.  I gave her my credit card, and began to take off his leash.

Then, the water works hit.

Right then and there, this 37 year old man of whom you are currently reading about LOST.IT.  I broke down and couldn’t recover.  They held Dewey down while they told me to stay in his face talking to him and petting him.  Within a few moments, that funny little dog that would stare so intently at me for the past dozen years – the dog who would wait the instant we left home to hop up on the couch when he knew he wasn’t supposed to – fell asleep forever … while staring at me intently.

I cried in the parking lot before making the drive home and thanked God for the 12 years we had him.  Dewey was a good dog.

As you know, I have made customs of other pets and family members, but I have not done so for Dewey…yet anyway.

With all of this craziness for 2018 happening, I have made customs of various other family members, and it has been a great distraction/therapy for me.  In fact, I even started offering a service of created family cards for people!  Here are a few that I’ve done so far this year: 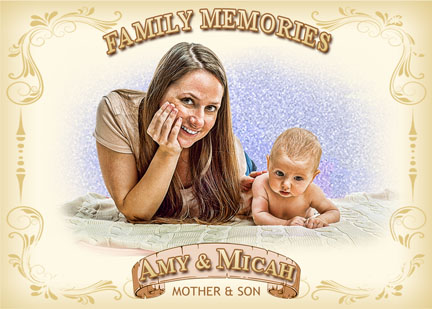 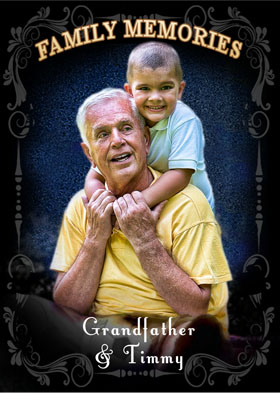 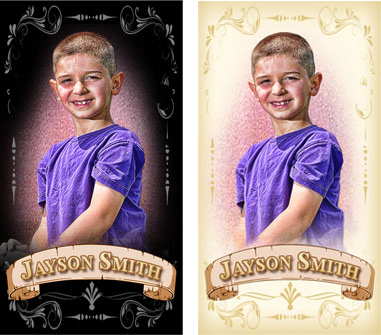 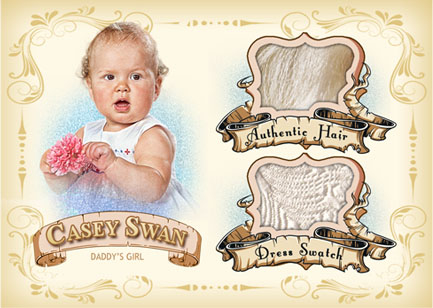 I’ve gotten so much incredible feedback from the families that I’ve done these types of cards for, it has been amazing and has even given wives a new appreciation for cards!   It has been a blast turning memories into collectibles for families.  My wife is considering us getting a pig, so stay tuned for a snout print relic card 🙂

Speaking of memories, here is another personal project I have had the pleasure of doing for someone.  About 20 years ago, a young man had the privilege of seeing a young and talented baseball player by the name of Derek Jeter.  He had the opportunity to get his autograph, so he went to a computer lab, found some pictures of Jeter on the web and printed them out in all their black & white glory.  Derek signed all three! 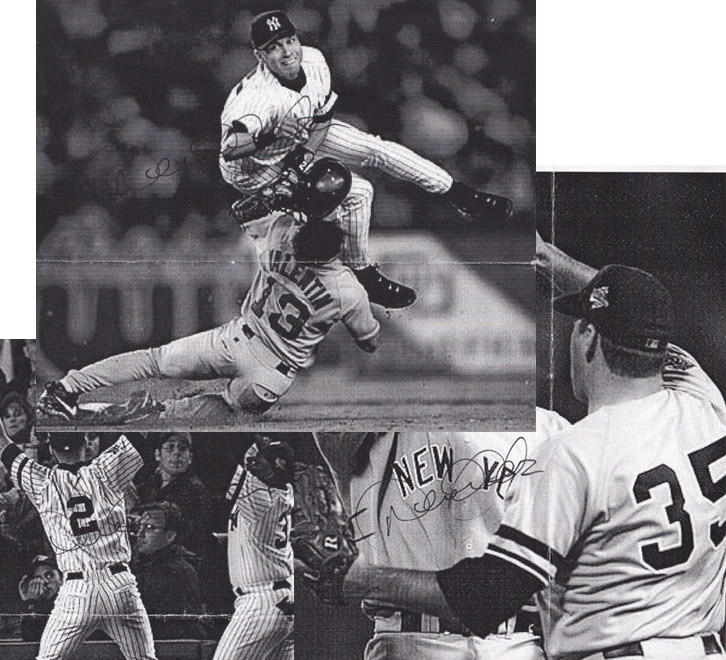 By today’s standards, they aren’t much to look at.  The pictures are pixelated, dark and on paper with creases.  The signatures are also difficult to pick up thanks to the darkness of the photos – these aren’t exactly BGS 10 perfect autographs signed in blue staedtler marker on perfectly crisp full color photos.  Nevertheless, these represent a priceless memory.

The plan was to take these and make them into something aesthetically pleasing so they can look as good as the memories feel.  Patches from a smaller replica jersey were used to spice the things up a bit. 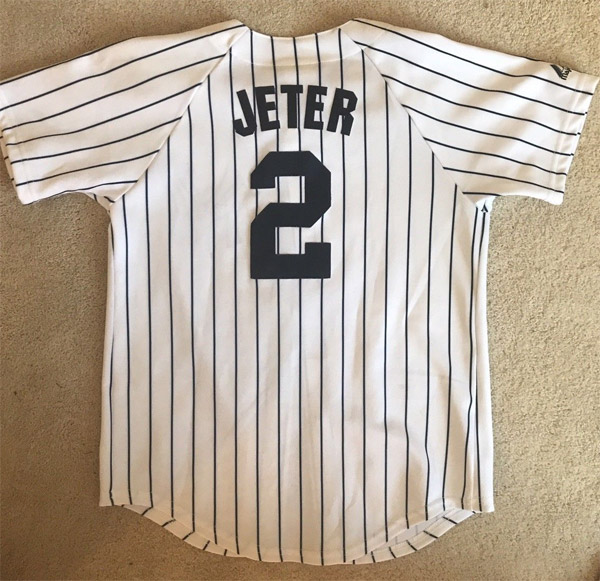 Two of the signatures were a bit too large for a regular sized card, so I opted to make them jumbo style cards that would fit nicely into a one touch vertical booklet holder.  One utilizing the Majestic patch: 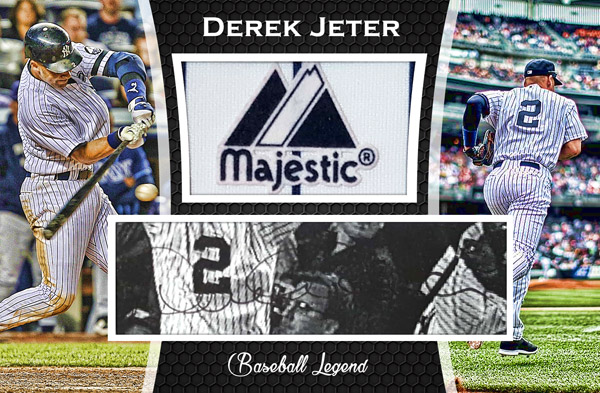 And the other utilizing part of the nameplate. 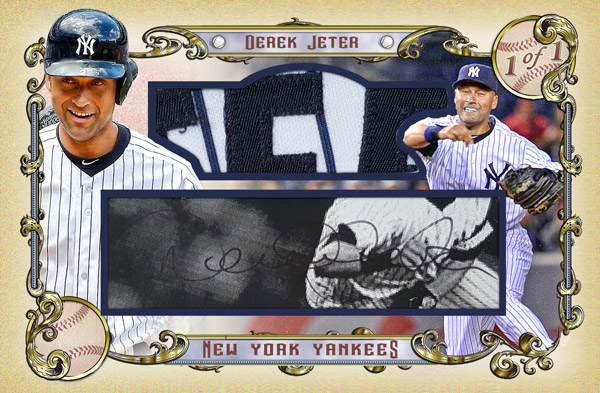 These pieces were really fun to do, and I’m happy with how they turned out!

Thanks for reading and looking!  Here’s to a MUCH better rest of 2018.  (It has to get better, right?  Baseball is just around the corner! 🙂 )   Oh, and STAY TUNED.  I might have *huge* news.  Nothing is certain, but I will probably know much more next time I write.