On the heels of a dry spell, things have picked up … a lot, and that is in no small part to being hit with the releases of Topps Series 2, Museum and Tier One.  (Stay tuned!  Stadium Club, Allen & Ginter and Clearly Authentic ALL drop within a few weeks as well!)  I just hit a milestone, passing up 600 pack-pulled autographs of Canseco alone!

Before showing off some of the latest 2017 stuff, I wanted to show some of the other cool cards:

This Stadium Club Ring Leaders is cool enough by itself, but as it isn’t all that rare, I don’t think I really appreciated until I picked up the oversized version of it.  It is foil etched, has hints of refractivnicity (yes, I made that word up) and is INSANELY loud.  This card has EVERYTHING.  American colors and stars, an explosion, rings, a screaming bald eagle clutching a baseball and … bananas?   The pic below shows the oversized (top) along with the regular. 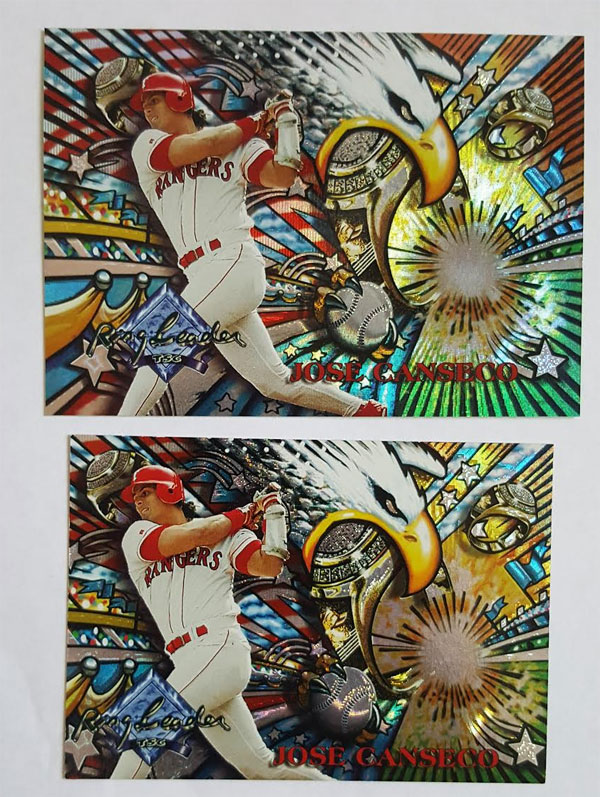 Here is a better pic of it, along with what the Bald Eagle was screaming… 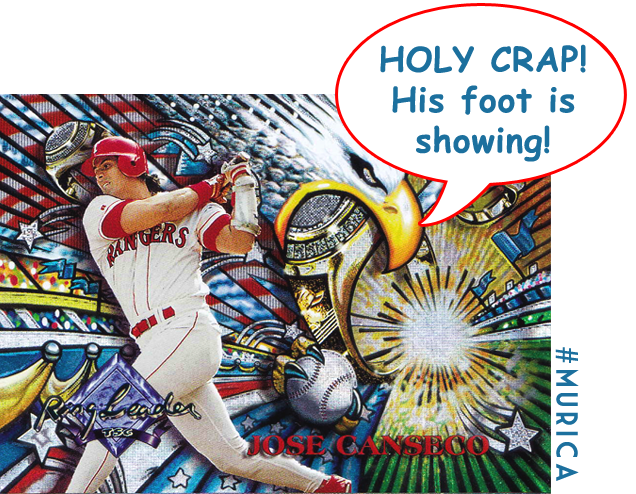 I picked up one with a regular back, however, the second one I picked up is my favorite. 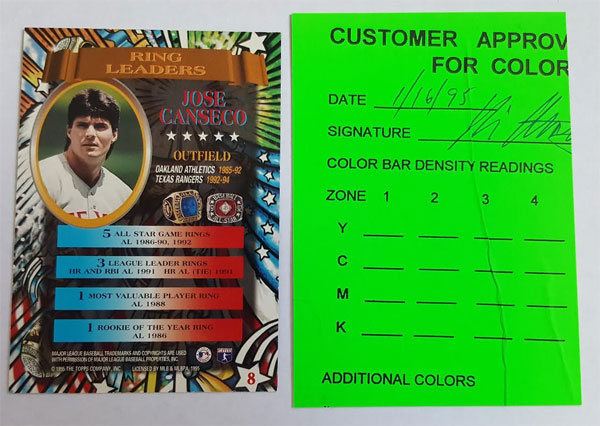 The back is covered with a sticker that says “Customer Approval for Color”, is dated and signed off on.  I LOVE this stuff!

I have picked up a TON of other great cards as well, however, I figured I would show the cream of the crop (yeah, there are some doozies!)  A HUGE thank you goes out to Travis and Matt who helped me track this card down! 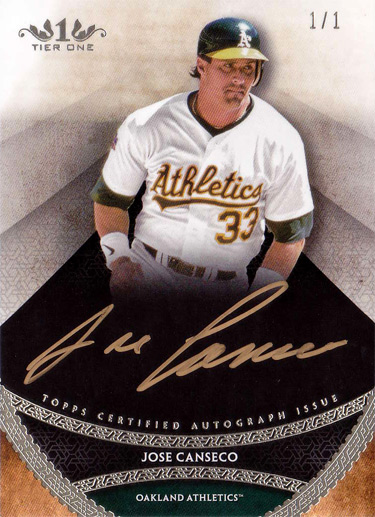 This sums it up for me on this card:

Deals on the best two out of the entire product done within an hour and 45 minutes of each other.

First, I did a deal for this:  only his SECOND knob/auto card ever made.  (At the time of this writing, that is!) 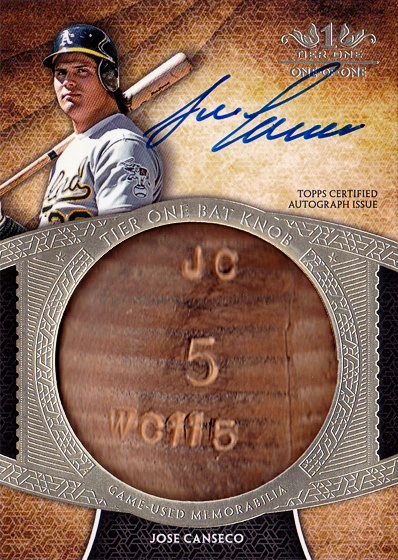 I think it goes along nicely with his first knob auto ever made! 🙂 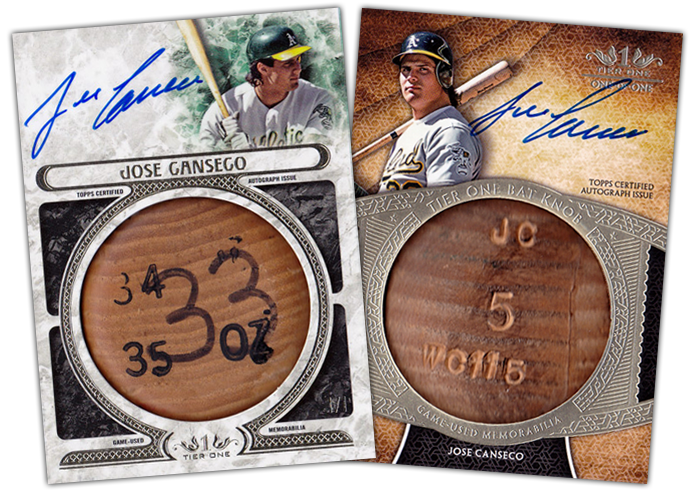 A big, HUUUUUGE thank you to everyone who alerted me to this.  I could not be happier to reel this one in!

As I mentioned before, an hour and 45 minutes later, I landed the next one, and I need to specifically thank Shane S. & Nasty Breaks for the assist.  You all rock!  I’ve been waiting (im)patiently for this next one.

It was supposed to come on Saturday.

In fact, it took until past 7 for the mail to get here at all.  As I type this, the tracking says it is scheduled to get here … yesterday.

I’m trying not to freak out, because it has happened before, and everything seems to work out … for the most part.

While I’m waiting, let me tell you a bit of some background on it.  Remember this card? 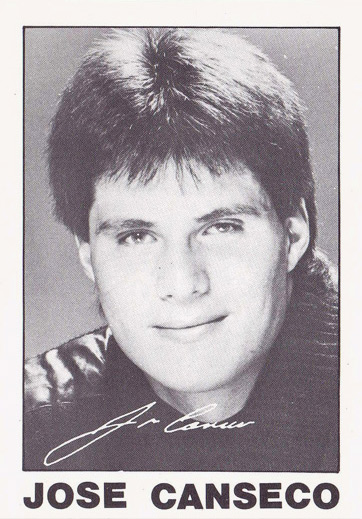 If you are from the 80s, the answer is OF COURSE you do.  It was a promo card from WORTH bats.  Worth started making bats in 1969, but rose to popularity, thanks to Jose using their bats during his 40/40 season.  For many collectors, the 1988 Worth card is a piece of their childhood.  For those of you who care to know, there are SIX variations of this card.   Worth bats are synonymous with Canseco bats – if you think of the bats he used, you think Worth (though he did you SEVERAL other types throughout his career.)

UPDATE:  It is Monday, and guess what?  It JUST came in! 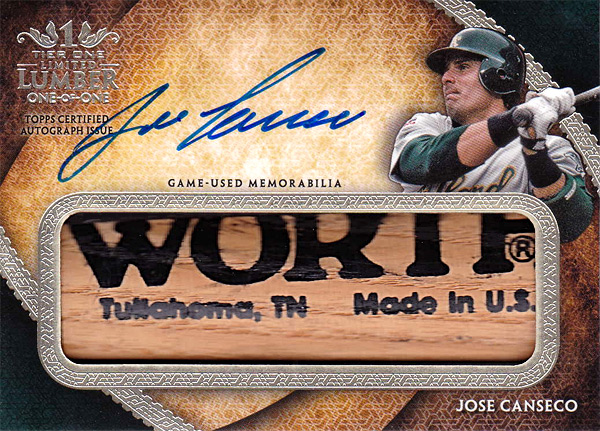 I just got this in literally about 30 minutes ago, and it is more beautiful than I thought.  I would have absolutely lost my mind if I thought as a child that one day I would own a card with a chunk of the Worth barrel logo plate from a bat used by Jose.  MAN, that’s cool!  😀  This is called Topps capitalizing on recapturing our youth, kids.  (And they got me … hook, line and sinker.) 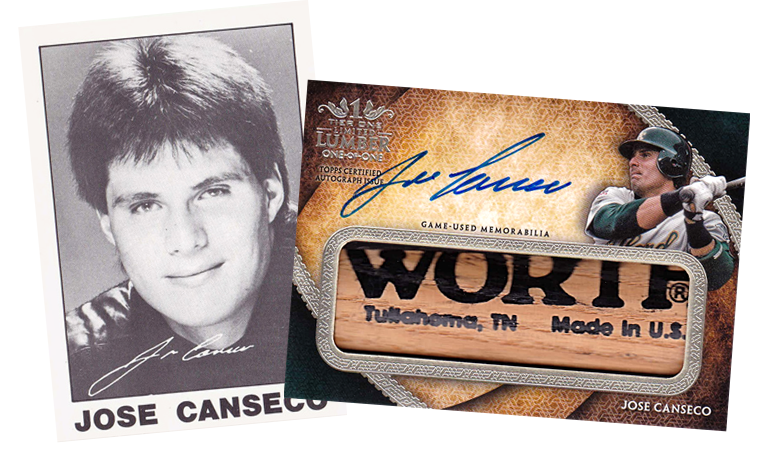 Here are all of my barrels together:  (I’ve been wanting to put this picture together ever since I did a deal for the auto barrel!) 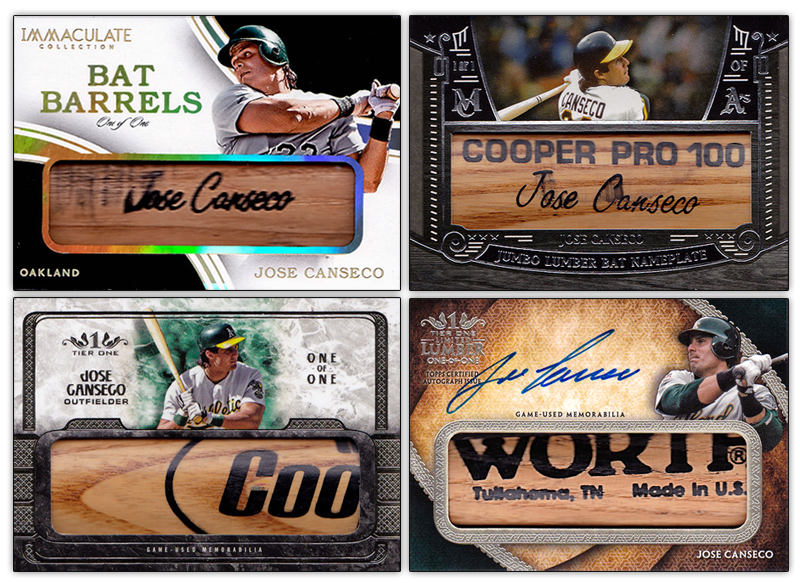 Last, but certainly not least, is a card I have been hoping would be made for for over a half year now.  Last year, I dealt away the only framed wood autograph Canseco card that was made: a 2015.  My only hope (and the only reason I did a deal) was in hopes of waiting on Topps to make another.  The more I saw pictures of my old 2015 Museum wood, the more I cringed.  How could I have let go of such a unique and beautiful card?

When previews for 2017 Museum came out, I was a bit dismayed. 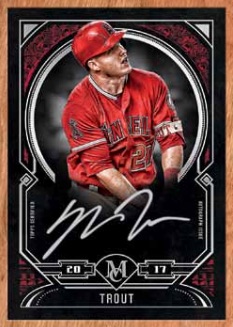 This made it look like it was NOT going to be a wood card, but rather a regular card in a wood frame.  I was bummed about this, but when they finally released, I was glad to see they were in fact, all wood!  The problem going forward though, was this:  how to find a single card in a product where they made have made thousands of cases of this as well?  Again, what if it were to not be found for another 10 years?

A few days after release, it was pulled and listed. 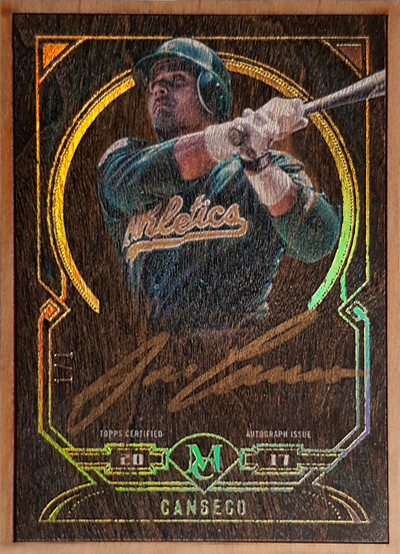 A picture is worth a thousand words, but I think I’ll add a few more just to say what I love about it.  The fact that it is all wood, the frame, the picture they used, the gold ink signature and the gold holo-foil they used.  Some of my favorites are the barrels, tags, knobs, jumbo patches, buttons, etc. but there is something about this wood card that puts it somewhere at the top of my favorite cards at the moment.  Three honest to goodness cornerstone cards for my collection all within a couple of weeks.  Insane!

For me, the fun didn’t stop there.  I have also created a few customs for my collection as well.   Some of these include designs I worked on a long time ago, but never did anything with.

If you are into football cards, you may remember Topps Magic.  I always thought it would be a fun set to have done for baseball.  What I did was, I made a card of Jose playing for the Armada (after his major league career) – and I made it out of wood. 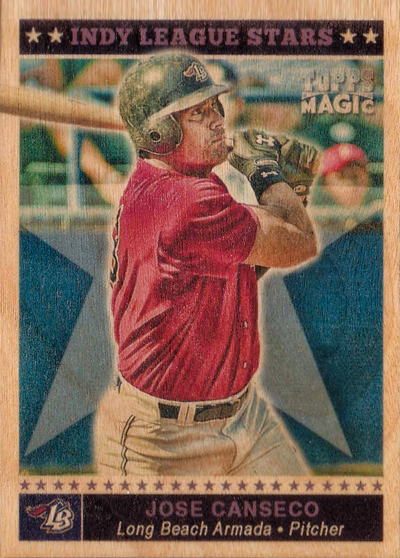 I think it turned out slick!

In keeping with the wood theme, I had always thought that the Most Wanted insert set that Upper Deck did several years back would have looked insane as wood cards.  Jose didn’t have one in the set, so I made my own by modifying the design to my tastes and creating it out of wood: 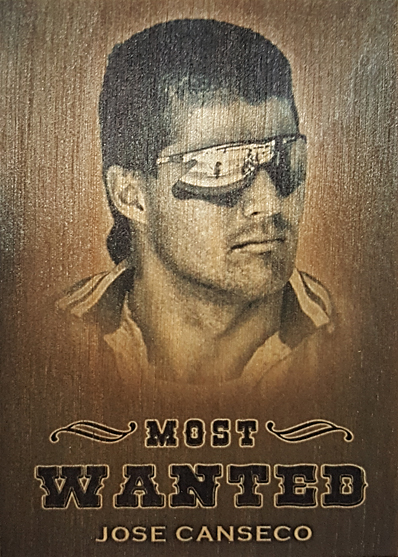 The last two cards I created have become two of my favorite customs.  A jumbo laundry tag and a logoman – Jose has one jumbo laundry tag that I’ve heard of (never seen) and no logoman has ever been made of him…until now.

This 1 of 1 custom features a majestic laundry tag from a player-worn White Sox jersey.  The design was originally created several months ago as a black refractor with no frame, but I just wasn’t feeling it, so I tabled it.  I started thinking “what about wood?”  I did it again, and it looked kind of neat, but really started popping to me when I added the black frame. 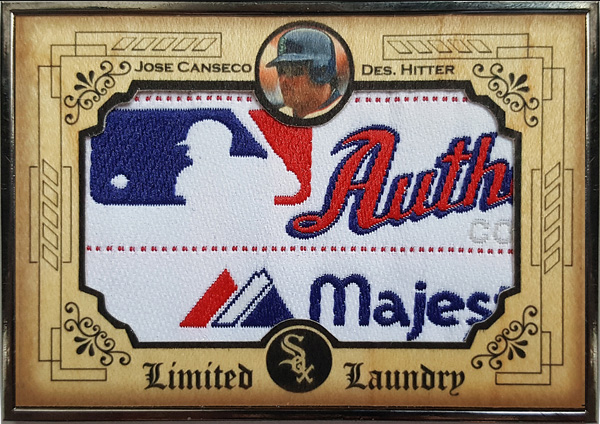 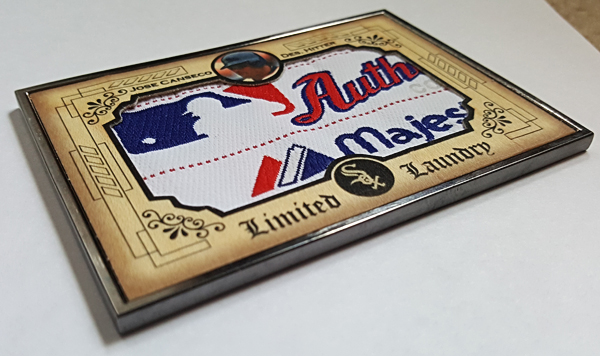 Remember that black refractor idea I told you about that I scrapped?  Well, I opted to give it another look with a gold frame and gold holo-foil for the logoman. 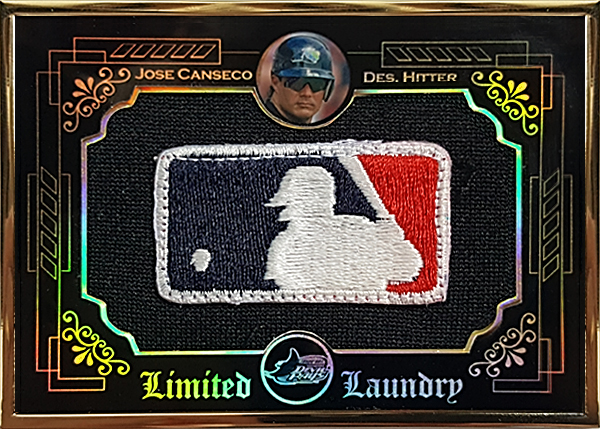 The logoman comes from a player-worn Devil Rays jersey, and I think flows very nicely together.  The gold refractive inner border and gold outer frame seem to have really matched nicely! 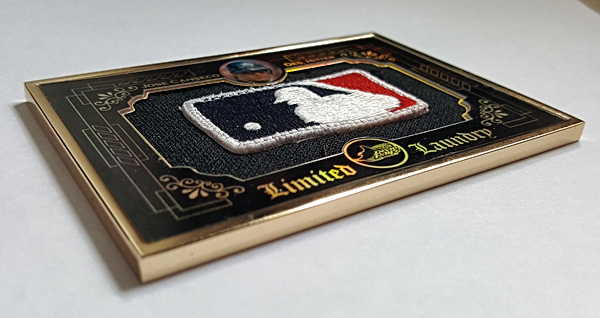 So, there you have it.  A framed wood, laundry tag custom, logoman custom, bat barrel and bat knob have all been added to my collection over the past few weeks.  That is what I call some good progress!  That is all for this installment.  Thanks as always for reading!  FYI, I’m already excited about the next article, if all goes well.  It should be a fun one to put together!