This article is a mere 4 years old today, but I’ve never seen it and enjoyed the read, as well as the questions that it kicked up in my head.

Cliff’s notes: The story on this card is that 100 were made and specifically presented to/for the White House. The quantity has been challenged, as Topps sheets typically have 132 on them, and some card shop owners in Illinois claimed to pull one from a pack, even though Topps claimed it as being impossible. A former Topps employee also took 70 copies and sold them privately. 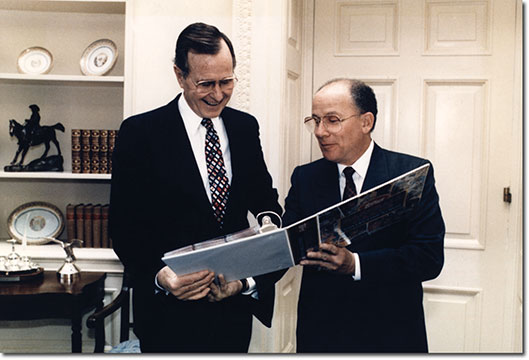 Here is where it gets interesting.

A former governor/white house chief of staff submitted some of these to PSA for grading. PSA thought they were odd, because they all had an amateurish looking glossy cover that sloppily overlapped the edges of the card. This was different than what the others they had seen in the past looked like (regular issue 1990 Topps card stock and finish).

PSA reached out to the former Topps CEO Arthur Shorin (pictured above) to investigate further. He had a copy of this card that was signed by Bush, and sure enough, his had the same coating. The signature was on top of the coating.

Based upon these two things, while they believe both non glossy and glossy to be authentic, PSA concluded that the glossy versions were the only ones that made their way to the White House. Because of these assumptions, they place a distinction of “White House Issue” nowadays on the PSA label for the ones that are glossy.

While there is a visible distinction between the two, it is interesting that perhaps the journey of the card may in fact increase the value of the cards themselves. As a collector, I can see the draw and interest in cards that were at the White House, even though they are essentially the same card, though one appears to have an amateurish laminate on them, which would otherwise be counted as having destroyed the card.

PSA made another interesting note that most high grade T206 cards you see likely did not sit in dingy tobacco containers for years, but rather may have come from uncirculated circumstances. Same with the ’50s food issues. A high grade 1954 Wilson’s Franks card was probably not pulled from a hotdog package either.

Anyway, many interesting thoughts go through my mind here. Some of the most fun hobby stories are due to controversy, whether they be from the back story of the 2010 Upper Deck buyback anniversary stamped cards, the pacific bankruptcy plates, or various Topps test issues – it is all great fun to learn about, but it makes me wonder why/where/how/who draws the line for what when it comes to crossing the line from being worthless to significantly more valuable than a regular version.