Buttoning Up a Massive Trade

Dealing with collectors that go after the same cards you go for can be very difficult.  In fact, many people think it is a waste of time and impossible to do deals with people in your same space.  On the outside, it seems like those who go after the same cards you go after should be seen as nothing more but a competitor/enemy.  In my several years strictly as a reseller, I remember coming across a thread that someone posted talking about collector competitors.  I thought it was funny, and never gave it much thought.

Now I know what he was talking about.  I know pretty much all of my competition.  I’ve done deals with all of them, and have a good relationship with most of them as well.  It is fun to be able to chat it up with someone who is passionate about the same niche of card collecting you are, and while things can get frustrating when going after the same card, I’ve mostly had positive experiences.

I’ve done more deals with AJ than others, and that is what this post is about.  He wanted my 2016 Gypsy Queen BUTTON card.  (Is he crazy?!?!) 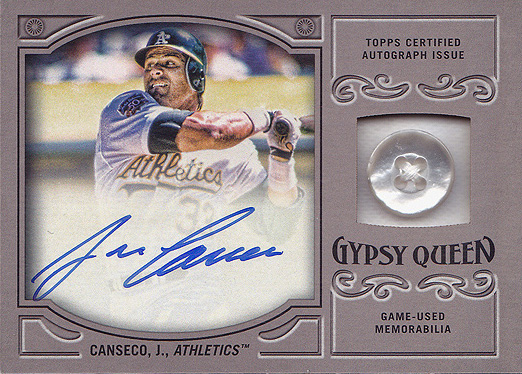 I consider this card to be one of my favorites.  True, I have MANY favorites (my website shows I currently have 138 different cards in the favorites section) but anytime you get a button card, it is special.  They are quite rare, especially for Canseco, so it isn’t just another 1/1.  I remember when I got this card – it was a GREAT feeling.  My first button card, ever.  Well, aside from this one I made a while back … 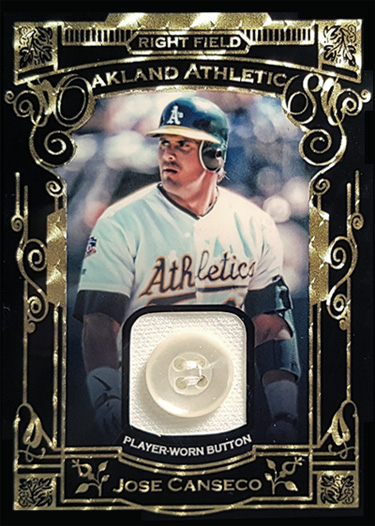 Initially, I thought there was absolutely NO WAY would I ever let my beautiful button card go.  Then, after going back and forth, it looked like there was a possibility.  I didn’t want to lose my only button card, and ultimately, that was going to be a very tough thing to get over.  He showed me a number of cards that he knew I wanted.  This consisted of five 1/1’s, one /3 and one /5.  All were pretty great cards, and while they weren’t all offered for the button, it was a great pool of stuff to try and do a deal with.  The problem?  I was in love with my button card!  Heck, it is even featured in the article that Topps ran on me recently.  That’s how much I love that card.  Since he had another button card, I figured it may be worthwhile to see about swapping my button for his as a part of the deal. 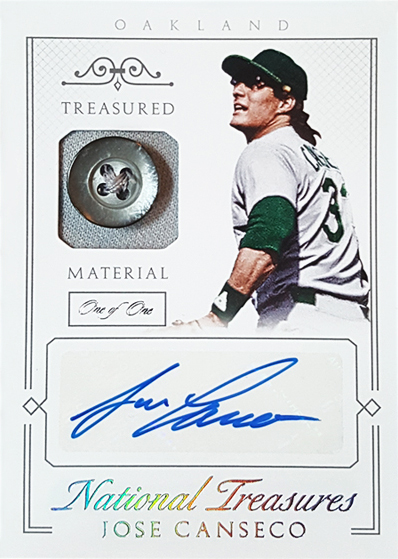 To my knowledge, this is Jose’s first 1/1 button card ever.  Generally speaking, I’m not hugely impressed with National Treasures, but for some reason, this card does it for me.  It is elegant looking, well balanced and utilizes a unique picture of Jose.  Absolutely beautiful.  I understand what NT is doing, with their clean white designs, but many times, they seem a bit too plain for my taste.  The button and signature add just enough pizzazz for me to fall in love.  The holo-foil usage at the bottom was something I didn’t realize until it came in, so that really puts it over the top for me.  Plus, it is the best card in the entire set (for me, that is!) 🙂

With as much as I love the NT button card, I love the GQ button more.  Though they are both beautiful, it simply could not be a straight swap!  In order to get this done, I suggested we look into allowing me to purchase the other 7 cards that were previously on the chopping block.  It is important to note that these cards would not have been for sale otherwise, which is what makes this this deal so enticing.  Here are the 7 cards: 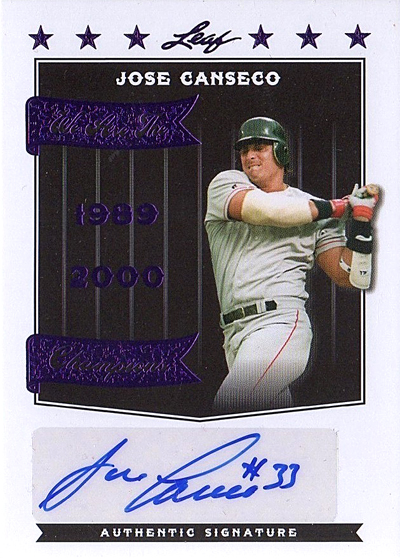 With as few cards that Jose had in the 2006-2013 years, he had even fewer that were actually baseball.  It also completes my rainbow of this card! 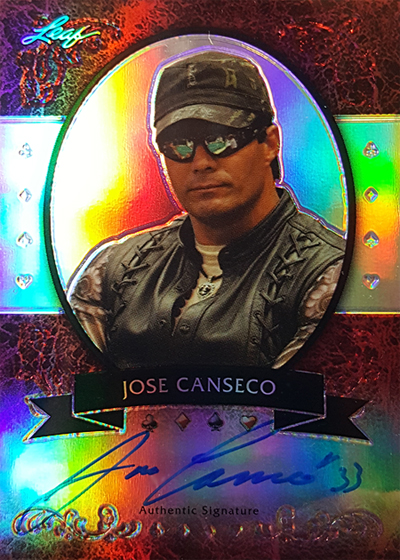 Between the years 2006 and 2013, it seemed that baseball wasn’t all that blackballed Jose.  The card companies seemed to as well, right around the time when this came out:

Thanks to Leaf, Jose did have a handful of cards from 2011-2013, though half of them were poker cards.  Panini put in a few in 2013 and then he was back in everything again by 2014.  Not only is this card one of the most awesome non-baseball cards you can have of him; it is absolutely beautiful.  I saw it posted online, and apparently, it was already spoken for before it had even been shown.  I remember seeing it posted, and waiting on pins & needles to hear back from the owner of it.  If I recall correctly, the person who pulled it is in love with the 2012 Leaf Poker Metal set, and has opened the lion’s share of the cases produced.  There is no telling if/when another will ever pop up again – the other 4 may well be locked up in PCs already, so it may be as good as a 1/1 at this point.  It is a GORGEOUS card with a lot of Fonzi/bad boy cool factor.  Bonus points for this card because it is also embossed.  I love it! 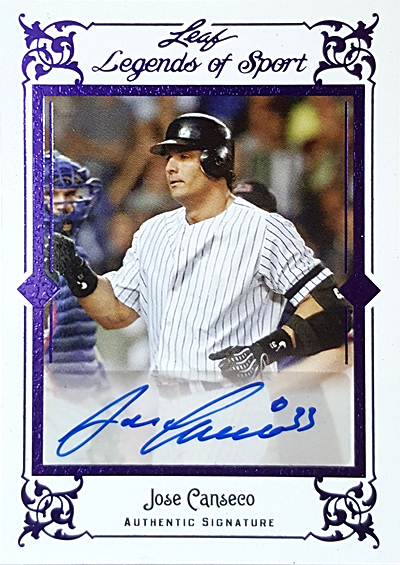 This 1/1 depicts him dawning Yankee pinstripes which makes it even cooler.  There are very few Yankees Canseco autographs – in fact, there are only 4 or 5 other different card types out there of Canseco as a Yankee with an autograph. 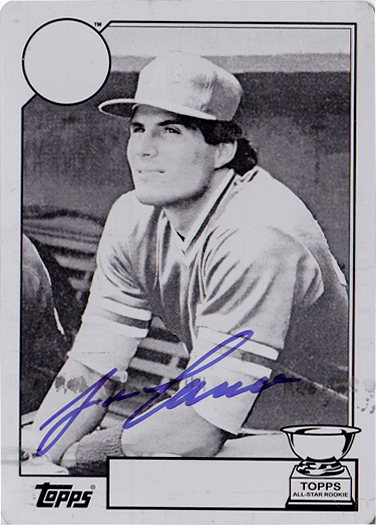 The seller of this plate and I made a deal on this, but unfortunately, I wasn’t quick enough on the draw, and lost out.  I’m glad to have this in my collection now.  It marks the 45th different variation of Jose’s most important Topps card ever:  The ’87 Rookie Cup!  See? 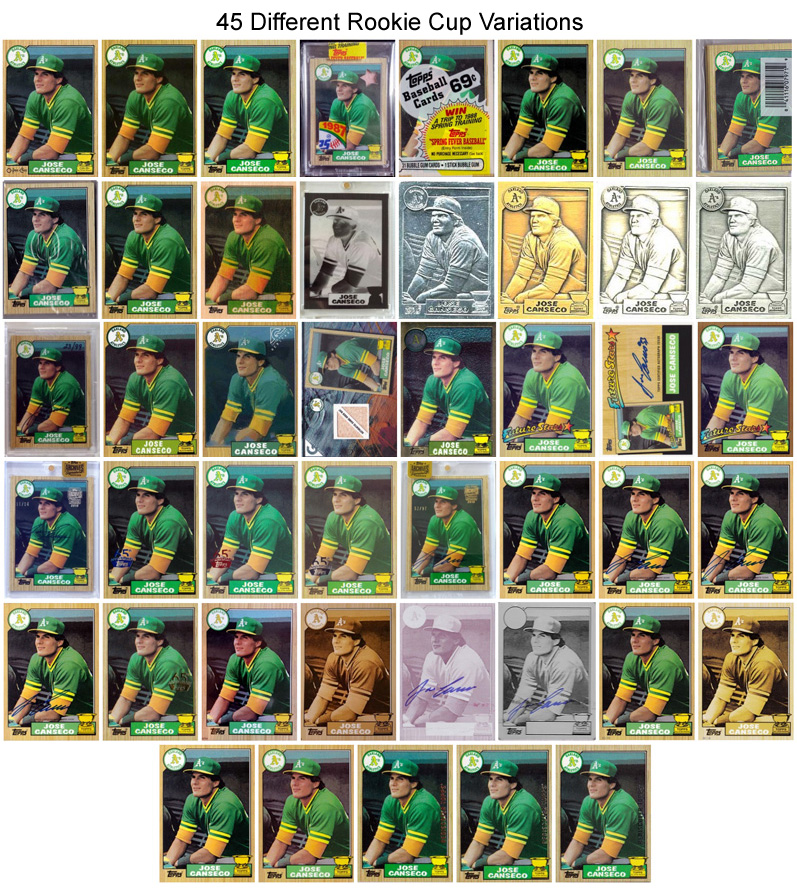 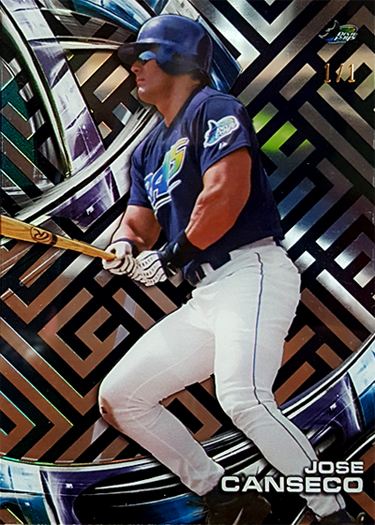 I’m a big fan of Tek cards.  In a previous deal, I moved a few printing proofs of 2016 Tek to make another deal work.  This marks my 20th 2016 Tek variation.  I actually thought this would look differently when it came in … I thought the background would be holographic, but instead, it is see through, with the maze portion being black.  How cool would it be to blow up something like this HUGE and put it on windows?  *strokes chin*.  It is slick and a nice contrast to my other 1/1 I just picked up (not a part of this trade). 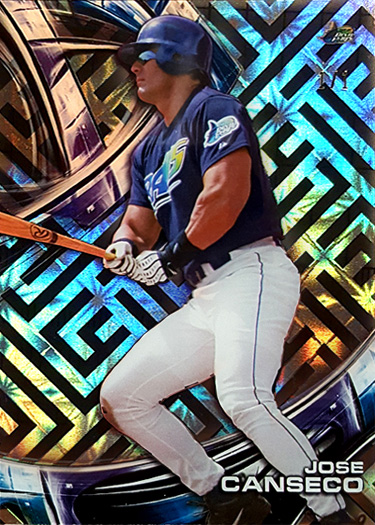 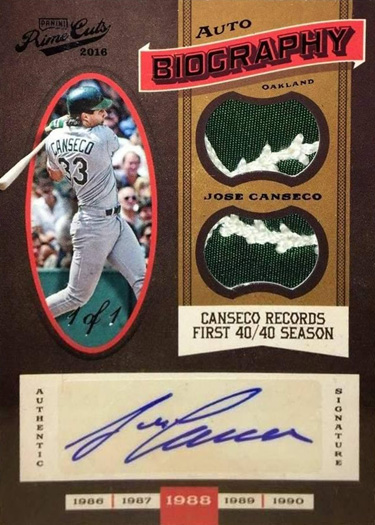 When the 2016 Prime Cuts Biography cards were first advertised, I had hoped Jose would be in them, just because there is something about the design that I like.  I already have two other 2016 Panini 1/1’s in my collection that utilize pieces from the same mascot sleeve patch, so it is nice having them all together.  It also completes my run of three 🙂  Plus, with an iconic name like Prime Cuts, it is never a bad thing to own the best card of your guy in the set! 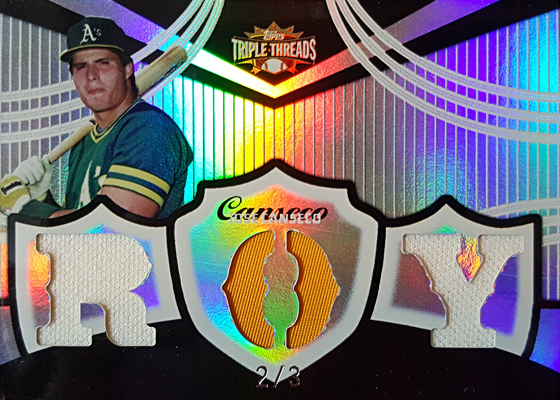 For years, I’ve watched Triple Threads come out, and not have Jose in the set.  I *LOVE* Triple Threads.  This is the first card of his in the TTT series, and Jose wouldn’t have another lone TTT card for a full decade.  This too, was a card that I just missed, and I was really bummed about this one.  It is BEAUTIFUL and perhaps my favorite card in the whole bunch.  The sweet refractor finish, the letters spelling ROY and the middle being a solid yellow patch … YES!  The pic is great too – what is he doing, blowing a raspberry at the photographer?  one of the other copies of this is locked up in a collection already, and I’d be willing to bet that the other will never see the light of day…at least not in this decade, perhaps!

This sounds like a slam dunk, right?  Unfortunately, we couldn’t agree on a price for the other cards, so the deal seemed like it would not happen.  Even though I would be getting back an AWESOME button card in return AND purchase 7 cards I would likely have never seen again, I just couldn’t seem to part with the GQ button.  You don’t just add this number of 1/1s and other rare cards like this in one shot.  It is a HUGE deal, and very frustrating to not be able to come to an agreement.

2017 Gypsy Queen came out, and I noticed Jose had a bat/auto out of 50, as well as another 1/1.  There was no mention of the type of material being used, but I daydreamed some day down the road about someone coming to me with it, and it having a button.

And then, it appeared.

A few days later, there it was … on eBay.  My eyes bulged out of their sockets.  Not just because of how beautiful it was, but also because of the asking price.  I quickly dismissed the card because of the hefty tag on it, thinking it would never sell and the seller may be happy just showing off the card on ebay for years, but after a few quick conversations with the seller, we were able to get the deal done!  I couldn’t believe it!  Here it is: 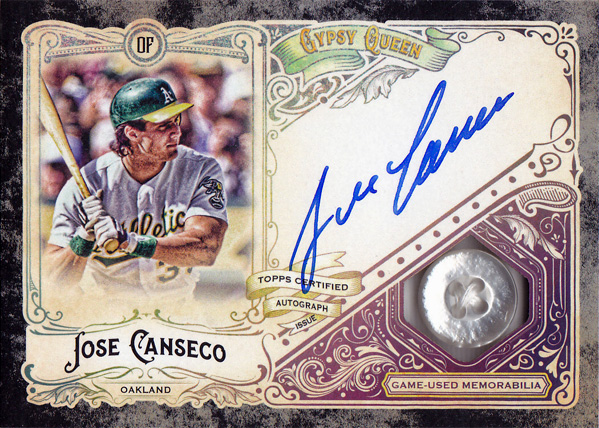 A word on the new Gypsy Queen:  The design is incredibly impressive to me.  It is wild, loud, intricate and busy (in a good way.)  The signature is diagonal, the button hole is unorthodox and there is just so much going on with it, that it makes me happy to look at!  To me, it is the kind of card that you keep a picture of on your phone, just so you can look at it from time to time.  I cannot say that with many cards.  The thing that is tripping me out about it is that it doesn’t look like Gypsy Queen.  It looks like Allen & Ginter and Gypsy Queen got married and made a beautiful steampunk / victorian style baby together.

And just like that, I did a 180.  This gave me a change of heart with the deal I’ve been writing about.  It is MUCH easier to give up a Gypsy Queen button when you have another Gypsy Queen button in your hands that you are in love with.  With the way it all came together, it feels like it was meant to be.  I will definitely miss my ’16 GQ button, as it is a beautiful card and the first Topps brand button that was released.  The fact that it is going in to AJ’s collection somehow makes it much better.

I’m also happy to say that I now have one horizontal button card from a home jersey and one vertical button card from an away jersey.  Adding these cards also gave me a motivation to update a graphic I had been working on for an article that Sports Collectors Daily is going to run on my collection.  I call it the 1/1 Bouquet Canseco: 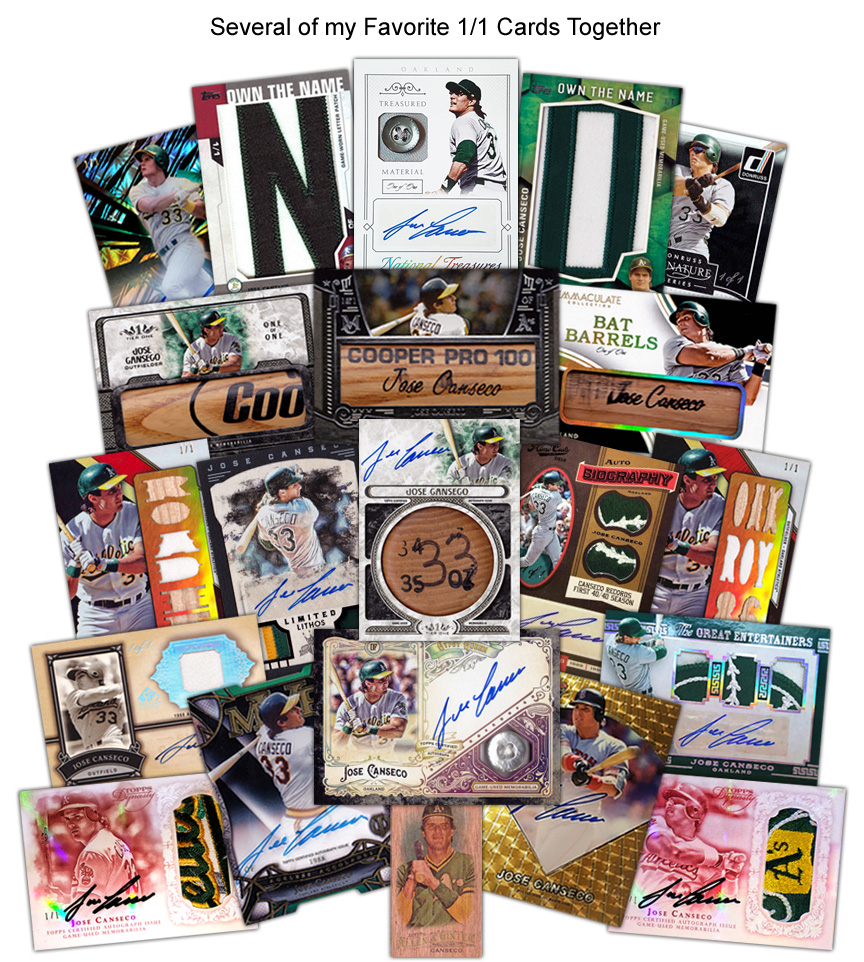 I know, I know.  It is a cheesy name, but catchy.  As you can see, three of the new cards that have come in recently have made it into the bouquet, with my new GQ button making it into the center, just beneath the knob.  I had a blast putting together this graphic and enjoy looking at it, too.  I just might do a similar graphic in the future to show my non 1/1 cards, prototypes, rare 90’s inserts, etc.  My new hobby just might become arranging baseball cards into graphics like this one 🙂