For the majority of my life, I haven’t been overly excited about landing a baseball card. I’ve always loved cardboard ever since I was a child, but it took me zeroing in on collecting one player to get genuinely hyped about certain cards that come in. Maybe the more focused you are, the more excited you get? I dunno.

A while back, I was told by a few folks to keep my eye out for a big 90’s seller.  Over the past few months, I’ve witnessed some AMAZING 90’s cards being sold for Ripken, Griffey, Thomas, Clark, etc.  No Canseco though, unfortunately.  I would look at what other people got, and dreamed about getting similar types of cards of Jose, but assumed it wouldn’t happen.

A few weeks ago after dinner, I was on my phone surfing the web, and it happened.  The seller, who has been listing some amazing cards for years was now listing some Canseco cards!  Fellow cardboard fiend, and Will Clark super collector Ryan (who you may also know as RStadlerASU22) texted me alerting me to this as well.

Before I forget, I wanted to show off a few fun Lego mini cards I did.  These will likely go in some A&G frames in the future.  The back of the cards do not have stats, but rather … backs 🙂 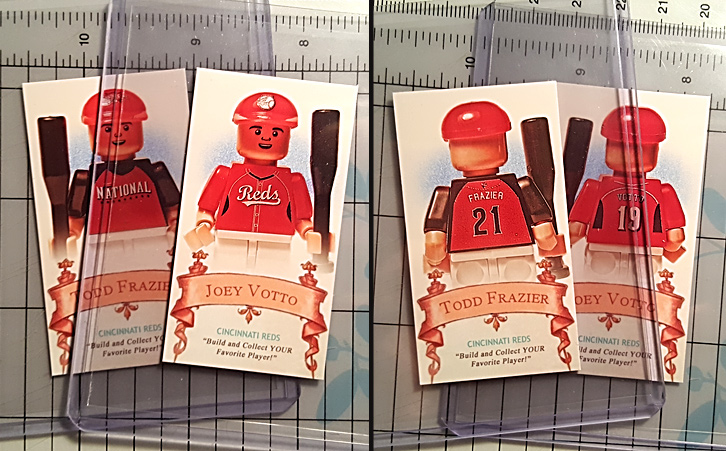 Anyway, I caught wind that there were going to be about five cards that I wanted to get my hands on.  One card in particular woke me up.  It was a top three card on my want list.  I probably wore out my refresh key to see when he would list them.  None were listed that night, no matter how many times I hit f5.

That night, I could not get to sleep.  Was it out of fear of me waking up to him having listed the card and it being gone?  If I’m being honest, then probably, yes.  I’m sure you think I’m a lunatic as it is with how much I write about cards, anyway – so the fact that I couldn’t sleep because of a piece of cardboard probably removes all doubt 🙂

After a VERY short night’s rest, I got up early to check if there was any movement.  Nope.  Ryan and I had been texting buddies throughout this process, alerting each other to any movement by the seller.  If he listed any cards at all, we would tell each other to check.

After a sloooow morning, cards started popping up.  They were ALL low end base.  Nothing exciting at all came across.  Then one card finally showed up: 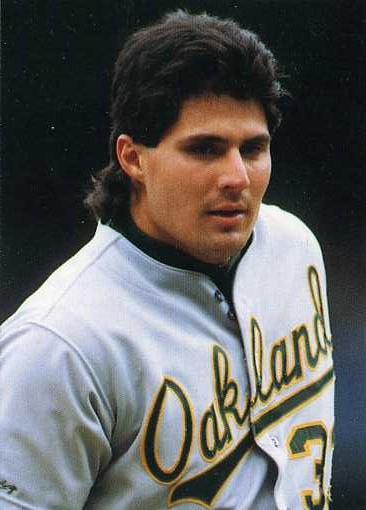 This card may not look too terribly exciting to many people, but if you compare the backs of the regular version, you will see the difference: 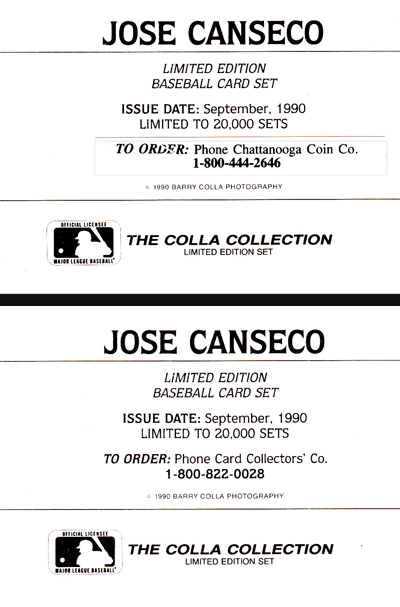 There was actually a sticker placed over the original address to direct them to order by calling the Chattanooga Coin Co. instead of the Phone Card Collectors’ Co. The card says it was limited to 20,000 sets LOL – imagine four monster boxes filled with the same card in circulation … and nowadays, we think something numbered to 100 is high.  Anyway, this is the first card I’ve seen with the sticker like this.    This is the Chattanooga variation.

If I may rabbit trail here a bit since we are talking about junk wax era cards released from places other than the “big four”, I was able to also secure my last and final Star promo card: 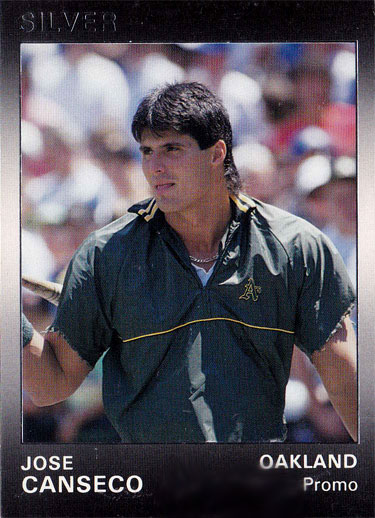 So unassuming, so plain – and it made me super happy to win it for $2.25.  The benefit of the Star cards being heavily UNchecklisted is that sometimes people don’t know what they have and do not have … a lot of the Star sets and promos are hard to tell apart.  The latest Beckett Annual Guide I have from 2005 only shows Canseco having four different Star sets, yet I have nearly 40 different sets, in addition to over 40 different promos.

I’m sure some matte or glossy versions may pop up that I don’t yet have and I’ll be waiting, but for now, the silver promo above completes it for me.  So, what do you do when you complete something?  You go after tests and errors, of course!

I was able to secure a few sets and promos of test errors from the Star company – stuff that wasn’t even supposed to come out. 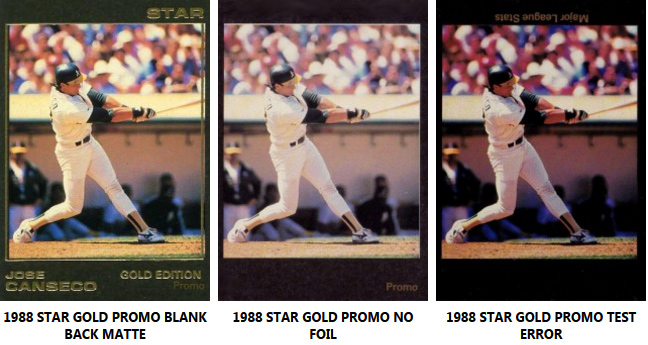 In the example above from left to right, you see the regular promo, the promo with no foil and the promo with the wording of a different card … upside down.  While the first card is the only “complete” card, it is infinitely more common than the other two. 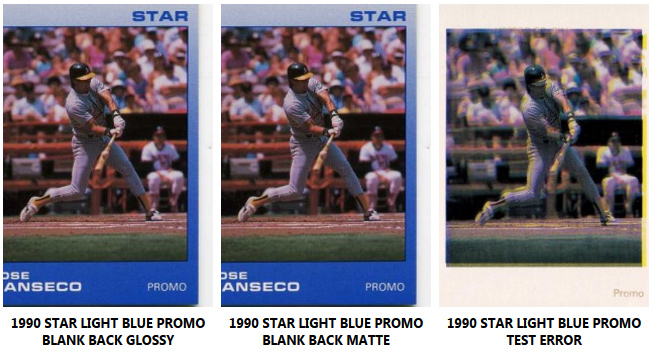 Above, you see a glossy and matte version of the same card.  (Mine aren’t off cut like this; it is just how my site displayed the thumbnails.)  The newest addition to the collection is the white border version that had the photo double printed.  It is wildly off, but definitely a fun addition to the “rainbow”.

I picked up a few full sets of test errors as well, but I won’t bore you with all those pictures.  I’ll just show one of the more notable pics: 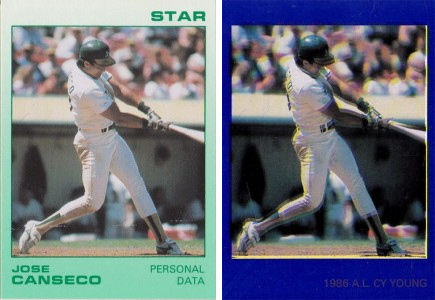 To the left is a Lime Green Star card.  To the right is the same card, but with a double printed photo, a blue border and the text below (hard to read in the scan) says 1986 A.L. Cy Young LOL!  The last card in the test error set actually has a purple border!  I’ll probably do a full post on STAR cards, but that is it for now … let’s get back to the main event!

After several other cards were posted, yet another card I wanted popped up! 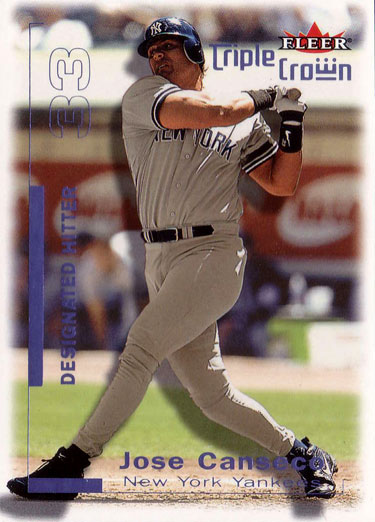 Rarely, (if ever) seen of Jose – 2001 Fleer Triple Crown Purple Retail.  These came one to a box.  Where are the others?  No idea, but at least this one is in my collection 🙂

After continually refreshing, cards kept trickling in. Most were cards I already had…and then ANOTHER popped up! 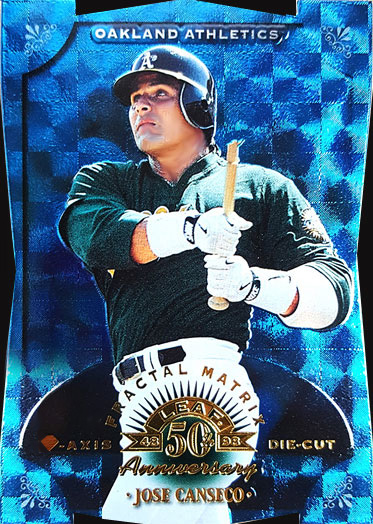 This is one of those cards that you can display on your desk and stare at because it is so pretty.  It is blue, die cut and has a similar etched foil patterns as the superfractor.  It is the 1998 Leaf Fractal Matrix Diamond Axis … this one, however, is the executive promo.  The only difference is that instead of it being serial numbered on the back, it is printed with xx/50.  Gorgeous!

This next one is a big deal.  I actually thought it was sold long ago.  As it turns out, I was wrong, and it popped up!

This card is really cool, and it prompted me to bust another card I have had for  nearly a year out of its BGS 9.5 case. 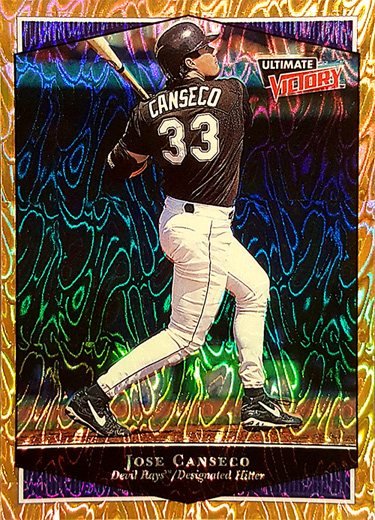 This is the brother of the previous card I showed, as it has no sn either.  After busting it out of its case, it feels like a brand new card again.  I’m glad I did it! 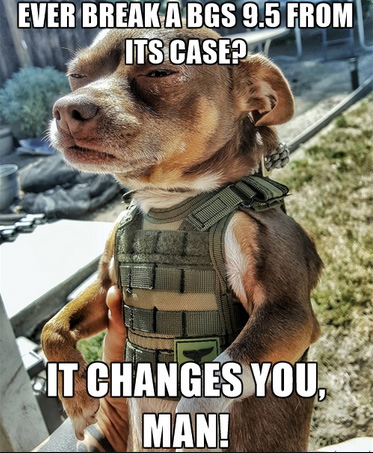 And then …. just like that ….  the listings stopped.  The top three card I had been waiting for didn’t show up.  I refreshed throughout the day, and even Ryan said that he hadn’t seen any other Clarks listed.  Worried that the seller already sold it, but still holding onto hope, I refreshed and refreshed (though not as fervently as I had been.)  I then got hit with the tired stick and took a nap.

When I got up, I checked, and still nothing.  Then after 10 minutes … WHAMMO.  It (along with a few other cards I picked up) were listed.  Well, folks.  Here it is: 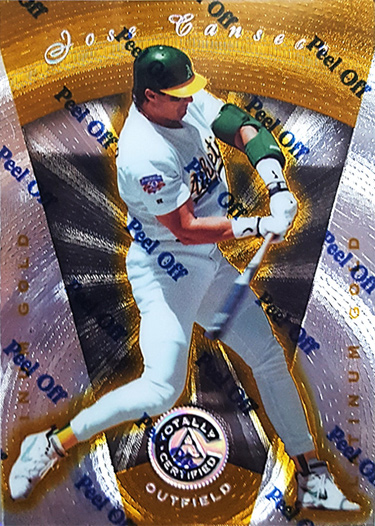 1997 Pinnacle Totally Certified Platinum Gold.  A TRUE white whale for me.  At the beginning of collecting Canseco hardcore, this was always at the top of my list.  The etched foil, the holographic foil logo, the gold, the fact that he’s on the A’s, etc.  It is about as perfect of a card as you can get.  I put this right there with the 1996 Select Certified Mirror Gold (which I am still looking for!) and the 1998 Donruss Crusade Red.

When you move it, you can see the light dancing off in multiple directions.  Rings of light radiate from the holo-foil rainbow logo and make their way up both sides of the silver portions of the card.  Rays of light twist in a spiral motion from behind the player.  Finally, the light ripples dance off the top gold portion that matches the Oakland Athletics Green and Gold perfectly.

This one is unnumbered, which means it was either an executive or replacement issue.  To me, this makes it very cool since it may be the only unnumbered copy out there.  Whether it is or not, I’d be willing to bet there are significantly less unnumbered copies than there are numbered, and while it is the same card, I’ll still keep my eye out for a numbered version as well.

In the end, I was VERY fortunate to be able to pick up all of the cards I had my eye on.  There were a number of others i have added to my collection this past month as well.  While I won’t show many more, a few of them were worth noting: 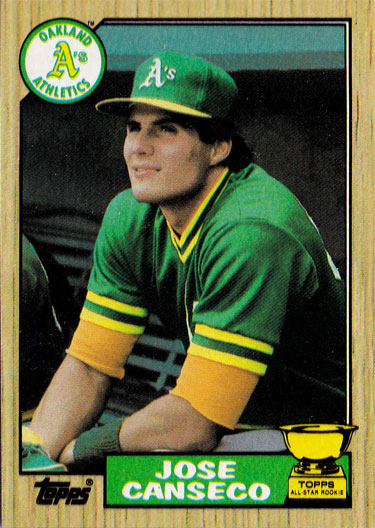 The 1987 Topps rookie cup card you see above is the only copy I’ve ever seen without the apparition showing clearly. “Apparition?” you say?  Yes … the green UFO lights near his face.  For YEARS, I had never noticed this, but take a look: 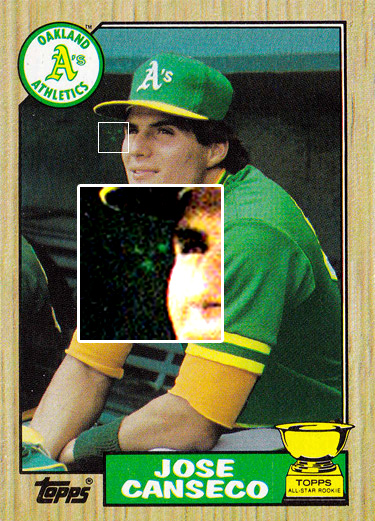 This is on EVERY original 1987 Topps / O-Pee-Chee / Tiffany card you will find.  In later renditions of the card, Topps noticed it and cleaned it up.  I noticed this a few years back, and looked forever for one w/out the green, but never found one.  The copy I picked up only shows it *VERY* faintly, but what is more notable than this is the heavy usage of bold, black ink.  After having it in my doubles box for about a year, I decided to graduate it to my collection.

Speaking of the rookie cup card, there is one other notable card I secured.  The 1/1 2016 Topps Walmart Autograph.  I *LOVE* it, and all variations of the 1987 Topps Rookie Cup card.  I am currently sitting on 44 different variations. 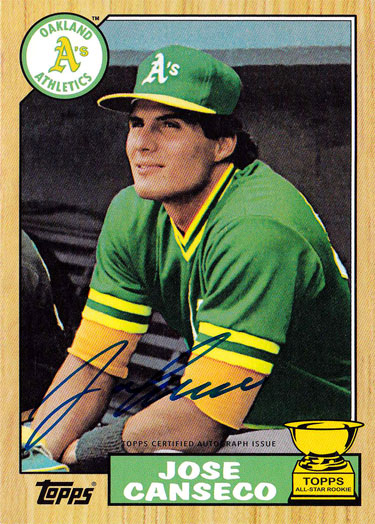 But frankly, it doesn’t hold a candle to any of these in my book: 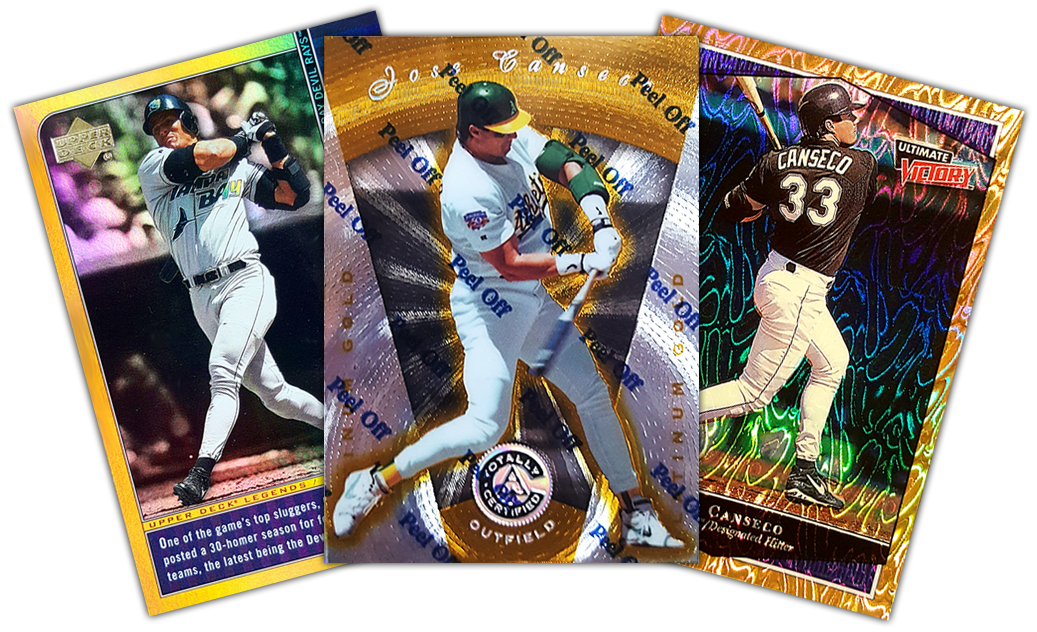 Not by a long shot.

So, that does it for my collection update.  I had to write something about them to commemorate the big hit before loading them all up into my website, and integrating them into my collection.  You have heard my story about harpooning a true white whale of mine (the 97 Pinnacle Totally Certified Platinum Gold) and what lengths I went to get it by staying up late, getting up early and wearing out my poor refresh key.

Has anyone else out there taken extreme measures to secure a card they want?  I’m curious to hear your story.