Supercollectors are an interesting breed.

For us, buying a card is easy.  Finding a card is hard, and trading with another supercollector is extremely hard.  Why? Because you generally have the same cards, and if you don’t, that means the card is EXTREMELY rare, and you likely will not want to part with it.

That is what makes my latest deal with AJ blog-worthy.  We both knew we had cards each other wanted.  He initiated the conversation, and brought up this card that I had picked up a few months back: 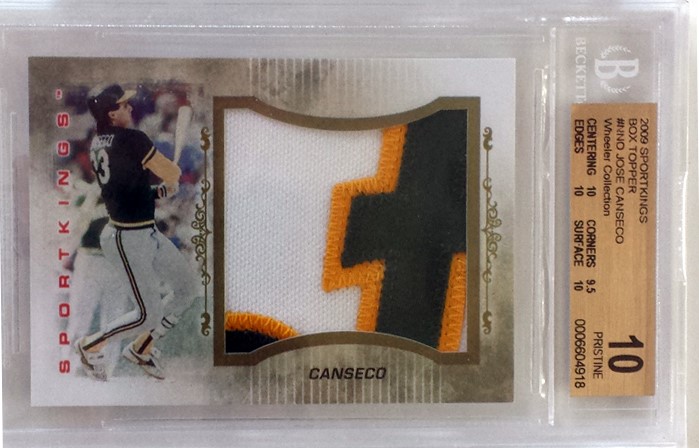 This is from the famous Wheeler Collection!  I don’t typically go for cards like this, but it had a LOT going for it.  BGS 10 … 1 of 1 … massive patch and a picture.  Most of these that I run across are not interesting to me, as there is no pic.  For me, this one just made sense.

HOWEVER, with that said, there are PLENTY of cards out there I want more, and AJ sensed it.  Plus, he has a history with this specific card that he was hoping to land, which goes back a long while.  It just seemed to make sense for him to have this card in his collection.

Doing a deal like this does NOT typically go smoothly, though.  As a matter of fact, it took a few days to hammer something out.  Actually, after hours of going back and forth, the deal was all but dead in the water.

And then a gorgeous card popped up on ebay.  And I missed it.

I messaged AJ, and sure enough – he was the one who landed it!  We then went through the final round of negotiations.  I was doing this by tapping away at my phone while my family and I were watching Star Trek.  (Don’t get the Manny reference? Check the Photoshop Battle post!) 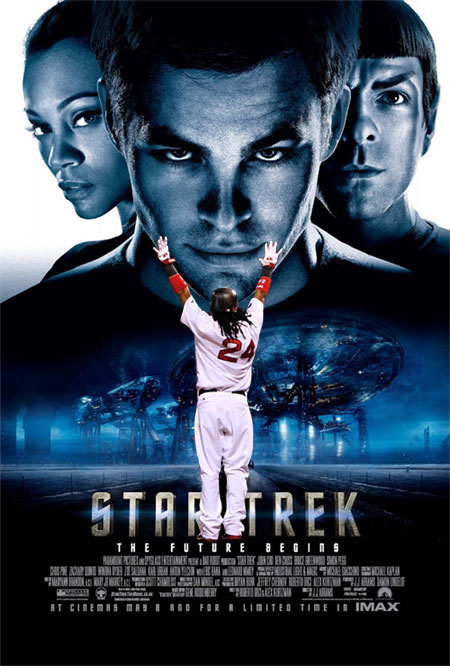 BTW – if you have little ones at home, check out Vid Angel.  – it is AWESOME.  You can easily set filters on bad language and inappropriate scenes.  My family has watched so many movies with the filters on for $1 each, it has been great being able to see some of our faves with our son.

I think he is now no longer just a Star Wars nut … he is also on his way to being a Trekkie!  Perhaps a dual citizenship of sorts is required?

ANYHOO, we FINALLY struck a deal by the end of the movie!  Here is what I had to give up (in addition to making my wallet lighter): 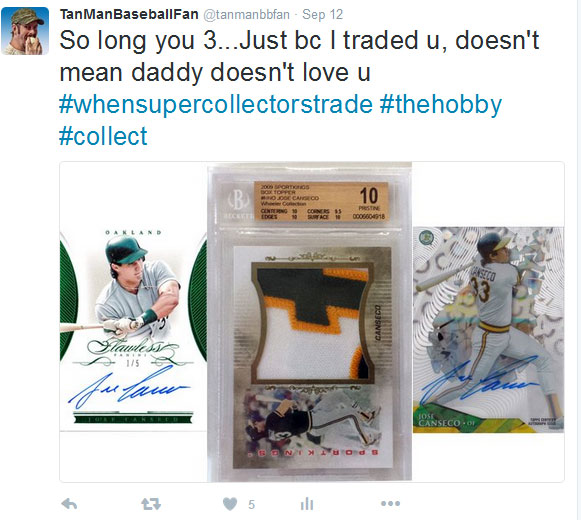 The 2016 Flawless /5 is a beautiful card, but thankfully was a dup for me.  The 2014 cloud diffractor /25 auto was not.  That was a bit tougher to give up, but thankfully, I was able to recoup it literally the same day I sent it out from someone who posted on their blog from a year or so ago.  Thanks, interwebs!

With a deal as big as this, the trip to the post office for the cards you are receiving requires up to the minute pictures while in transit, right?

“Tanner, would you like me to take the Mustang or Scooter?”

I would have chosen the stang, but before I answered, he opted for the Scooter. 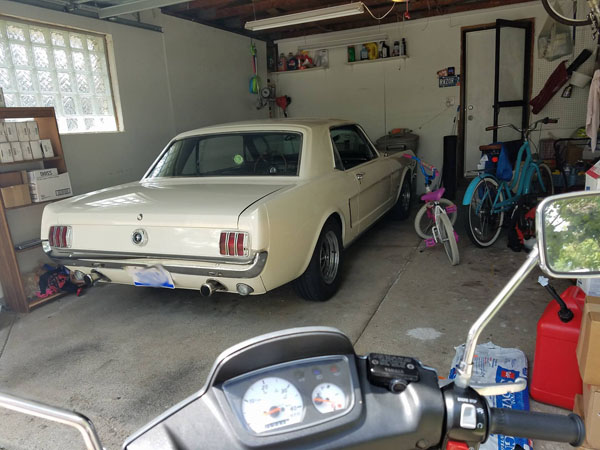 Whoa dude – careful!  Don’t go too fast!  And how are you transporting my cards while taking a pic of the speedometer?  *GULP* 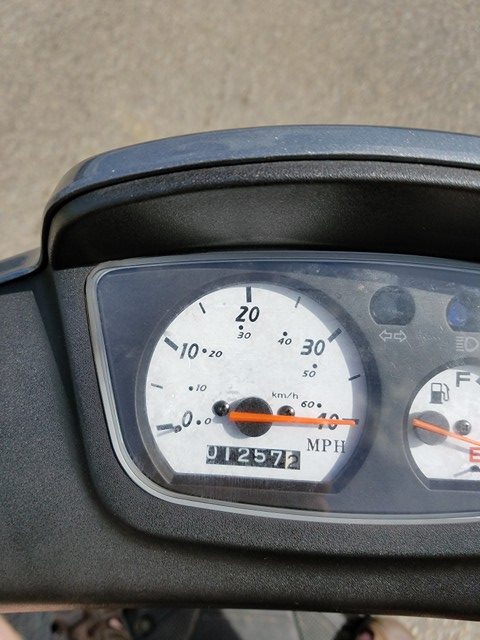 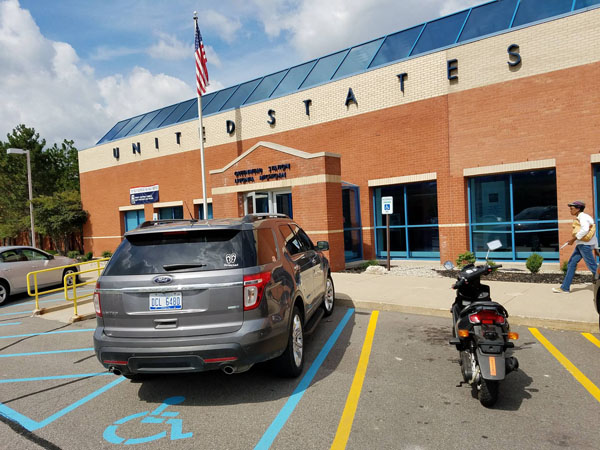 … and apparently picked up some subway on the way back home? 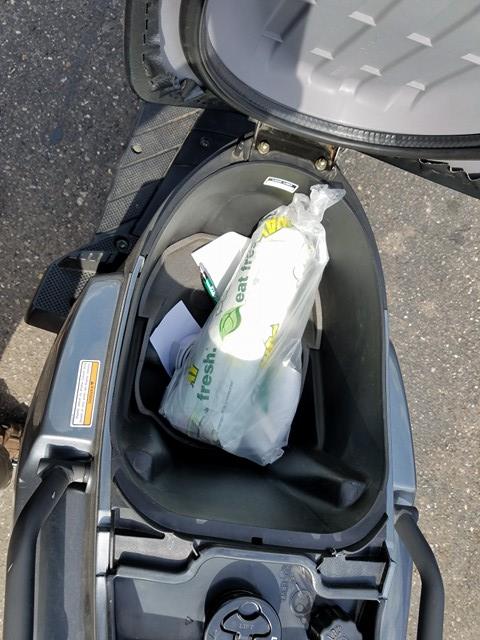 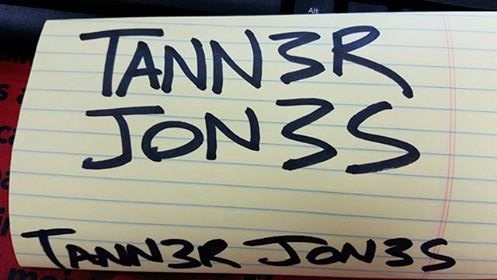 Hey, all is well and good as long as my cards make it here 🙂

When his 3 cards arrived, he showed me what he did.  (Make sure to divert your children’s eyes from this next pic.) 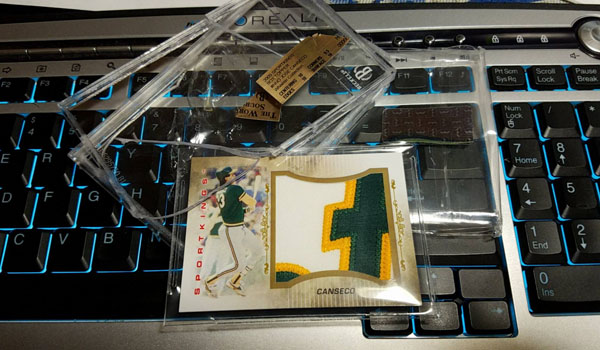 GASP!  He jailbroke the BGS 10 all in the name of card holder uniformity!  I don’t blame him for doing it, but zoiks!

My cards were delivered here on Saturday … when I was either going to garage sales with my wife or the library with my wife and son.  URGH!  Either way, I missed the package, and it ended up getting here on Monday.  Here is the loot!

Pacific Timelines Star Punch Variation
The standard card is numbered to /199.  What makes this card unique is that it has no serial number at all, and is punched with a star on the front.  Until I find the real story, I can only speculate that Pacific did this to a small select number of cards as a proof before numbering to show that they should not be packed out.  Is this the only one like this?  Are there 10 others out there?  I’m not sure, but all I know is that I’ve never seen another one out there of anybody. If anyone has any info on this, I’m all ears! 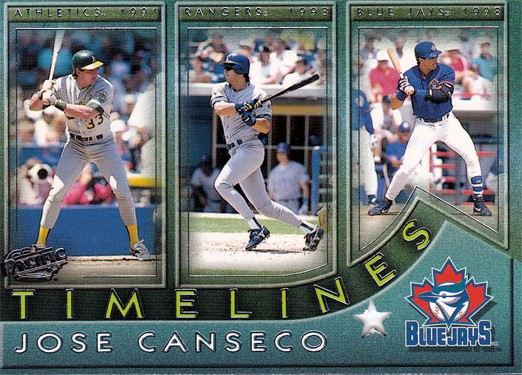 1990 Donruss Blank Back
By now, everyone has heard of the 1990 Donruss Aqueous test cards.  There are a few different variation types from this set, and I had never seen a blank back version of Canseco ever in my life before.  Donruss blank backs are hard to come by.  While Topps blank backs are rare, they are significantly more plentiful than Donruss.  Is this a 1/1?  Maybe, maybe not – but the fact that I’ve never seen one of Jose in the 27 years I’ve been collecting says something.  In spite of the 5 grading, it looks AMAZING.  The holder much be masking anything going on with the surface very well. 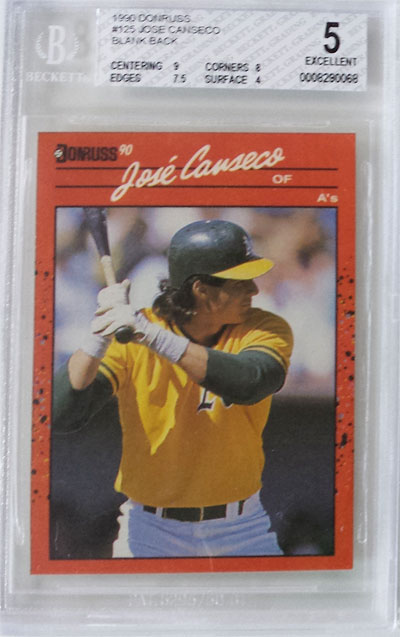 2000 Upper Deck Pros & Prospects Punched Exchange Card
Here is a note on this:

and, another write up…

Randomly inserted into packs, this 21-card insert is a complete parallel of the 2000 Pros and Prospects Game Jerseys. Each card is serial numbered to the player’s jersey number, and are numbered on the back using the player’s initials. Please note that Upper Deck has announced the exchange cards of Jose Canseco and Tom Glavine will be redeemed with Mo Vaughn.

Just some cool baseball card history there for ya 😉  This is only the second exchange card I’ve seen of Canseco, and the ONLY one I’ve seen with a punched hole in it.  My assumption on this is that this exchange card was found in a pack, sent back to upper deck, who in turn sent the redeemed Canseco (or Mo Vaughn?!? Jeez, how ticked would you have been as a Canseco collector?) and instead of tossing this, it somehow got into the hands of a collector.  I still need the non-punched exchange card that has a large white sticker on the front. 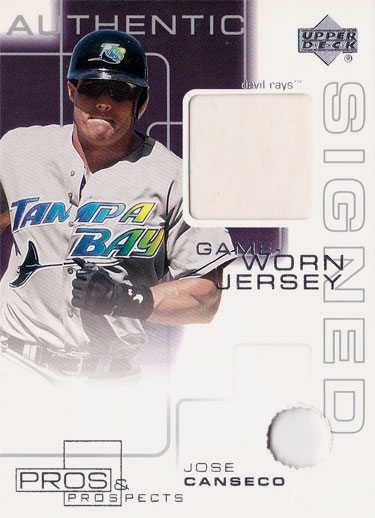 2002 Donruss Recollection Collection 1986 Donruss The Rookies /24
These cards are TOUGH.  Especially the rookie version of the player you are going for.  I’ve never seen a Canseco “The Rookies” version for sale, and worthpoint shows that only 2 others in the past 9+ years have surfaced on ebay. 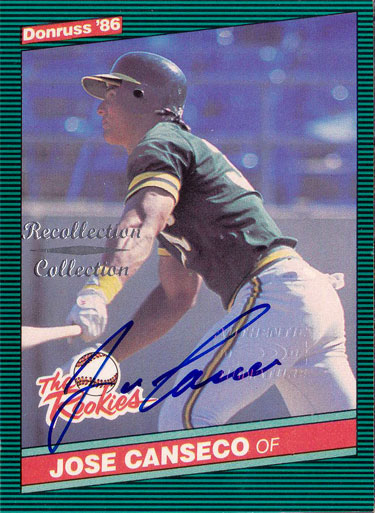 2005 Sweet Spot Sweet Sticks Signatures /35
Only 4 have surfaced on ebay in the past 9+ years of this.  I’ve got to say that this was probably the biggest surprise of the entire trade.  It is beautiful in hand!  Gorgeous signature on wood – gotta love it. 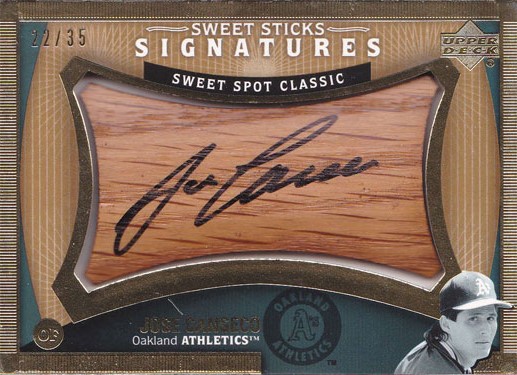 2016 Topps Museum Sepia /5
This card was REALLY driving me nuts for a while.  I was actually watching online breaks for this and never saw one pulled.  The regular version was a quick grab for me, as was the gold #/5 – someone reached out to me on that one a day or two after the product was released.  This sepia though … my favorite of the 3 … just did not want to make it into my collection.  So far, AT LEAST THREE of the five have surfaced, and I either missed them OR they were ghosted from my view for some reason. 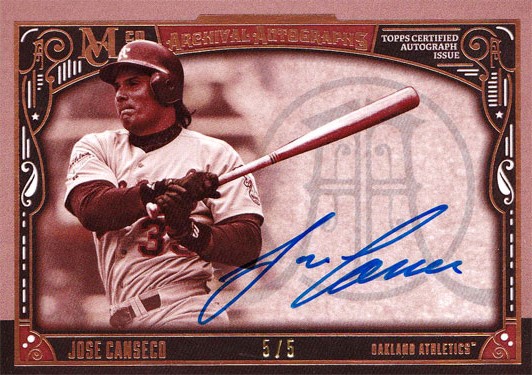 2016 Topps Archives Signature Series 2004 Bazooka Autographed / Bat 1/1
Last but not least, this is the card I missed that got the deal done.  I can’t believe I missed it for sale on ebay, but I’m glad I did, because this entire deal may never have happened.

To date, this is the only Archives Signature Series game used card that has surfaced.  I was really kicking myself for missing this one, because while I knew the sales sheets said some game used cards would be inserted, I didn’t realize Jose would have ANY … let alone this one.  This is one of my favorites. 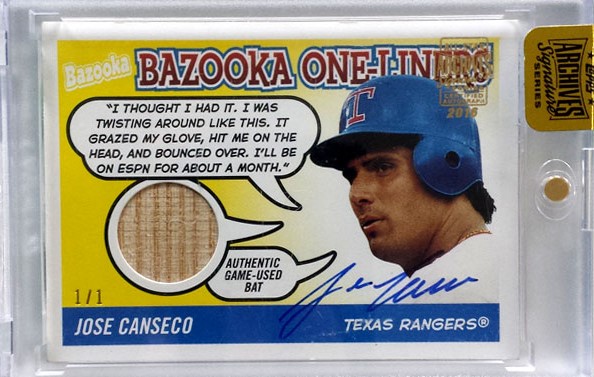 So, that about wraps up the entire trade between me and AJ.  (AJ and I?)  But, before I end this, I had another package come in that has a great story, which I wanted to share.

(Courtesy bathroom / coffee / dinner break inserted here for you folks who may want to pause this.)

A few months back, I was checking ebay and noticed some Canseco cards pop up that I had never seen before from the early 90’s.  That day, other Canseco collectors had asked me about them before as well, and everyone said the same thing:  These have never been seen.

They are 1992 Ace Novelty pre-production prototypes.  The seller had a number of them (many of which had wrinkles/bends on the fronts.)  and the prices were HIGH.  I balked at the price, and asked the seller if he were willing to go down.  He mentioned he was certain a Canseco collector was going to eventually pick them up, and would be happy to wait until Winter to see who would bite.

With absolutely NO history on these cards for Canseco collectors, I felt I had a good chance of waiting him out, so I let them sit (while nervously keeping an eye on them for a few months.)

A few months later, I asked again if he would be willing to go down significantly on the price, and he agreed – though not to how much I was hoping.  However, thanks to the help of Ebates and Ebay 10% bucks, we were able to make it happen!

The thing that really got me all hot and bothered by this particular set was 1) he cut these from a sheet himself that he picked up for MEGA cheap off ebay and 2) though several cards were bent/wrinkled, several of these cards were actually selling for between $200-400.

This perplexed me, so I did some research of my own by contacting the seller of the sheet, as well as post on the forums.  I found some really fun facts about this set!  Some of this data is thanks to @Mozzie22.

Apparently, Ace petitioned MLB to obtain a license to create a set of baseball cards for America, Japan and other countries.  They were very late into the approval stage, when, for some reason, it fell apart.  The finished cards that were made to show as samples were to be destroyed.  Instead of destroying all of them, the person in charge of it took some to his little league team he was coaching and gave them out to some of the kids.

Some of these cards surfaced on ebay, and sold for $200-400.  I have seen some sell for very low, but I think that is just a matter of the sellers not knowing what they had.  Cards of Puckett, Ryan and Ozzie Smith (among others) have been seen, but never once have I seen a Canseco, until the pre-production prototypes showed up on ebay a few months ago.  I’m not even sure if the finished prototypes exist or not.

As for the sheets, there were three pallets made of them.  Once made, they were shrink-wrapped and put in the corner of a warehouse for a year.  Major League Baseball ordered them to be destroyed and put in a landfill, with the supervision of someone watching them being buried.

The person who was in charge of this yoinked a sheet, and that is where these came from. 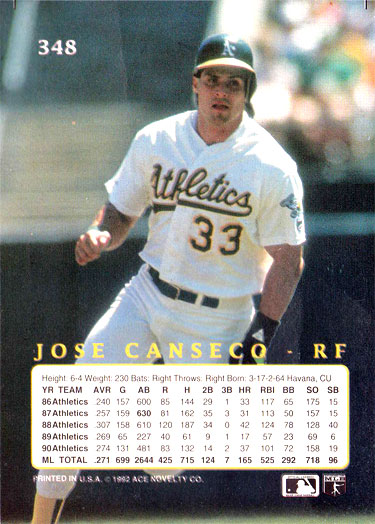 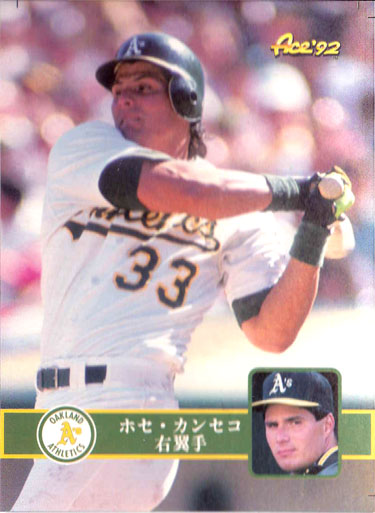 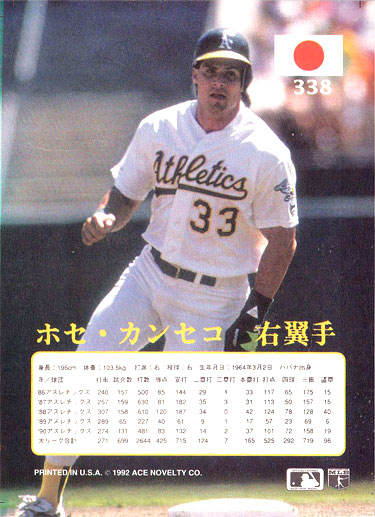 Note, these are 4 separate pieces.  I love them and am very happy to have such rare prototypes in my collection!  The story is reminiscent of Topps cloth cards, Donruss Aqueous and others.

That about does it for today. Here is a video of me opening and talking about the cards mentioned above if anyone is interested:

Thanks for reading / watching! 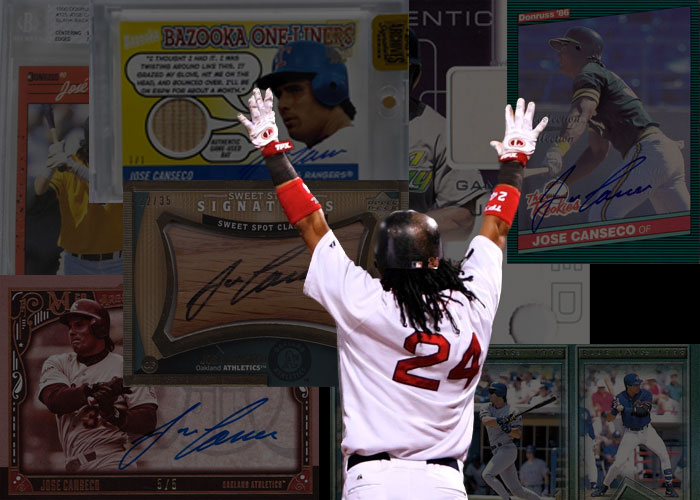