Monday Morning:
(Line trilling….)
Dealer: Thahhh Bullpen!?
(I loved how Mike the dealer would say this – he would start in a normal voice, but would drop and octave between the 2 words and raise his voice back up to make “The Bullpen” sound like a question.) 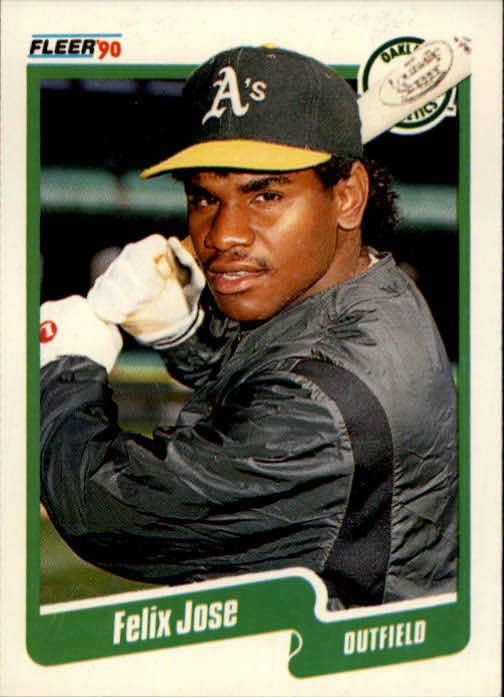 Me:  Uhhhmmm…Hi!  I noticed that the 1990 Mother’s Cookies Will Clark shows him with a bat, yet he doesn’t even have a helmet on!  Everyone knows you can’t bat w/out a helmet!  Does this make it more valuable? 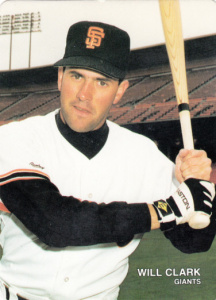 Dealer: No, it does not.

Pretty annoying, huh?  This is why my parents limited me to calling The Bullpen of Fresno, California once a day as a child.  Had they not put this limitation on me, I would have probably called them 10 times a day…or more.

The reason?  Because I was fascinated with finding baseball cards with errors/variations in hopes of striking it big with something that perhaps Beckett had not yet picked up on.

Over the years, many different collecting habits have emerged, and with it, card company offerings.  Sometimes available products are accidental, some are reactionary and other times they are just to test the market.

Perhaps the most infamous faux pas in baseball card history is the 1989 Fleer Billy Ripken “rick face” (as Beckett affectionately listed it) error.  Sure, the 89 Upper Deck Griffey is perhaps the most notable card of the ’80’s, but no card comes to close to having caused such a stir as the Ripken.

Collectors rushed to get their hands on 1989 Fleer, and while initial reports were that a mere 3,000 or so were out there, reports nowadays say that there could be as many as 100,000 or so of them.  There are about 12 or so different variations of this card – a result of Fleer scrambling to correct the card (or was it?)  Back in 1989, the card jumped to nearly $500 in value for a time.

When this happened, an alleged angry Billy Ripken told a reporter that it appears as though he had been targeted by teammates.  This story differs from what the photographer of the infamous card said.  He tells a story of Billy coming to him saying that it was his brother who did it.

20 years later, collectors were treated to Billy Ripken breaking the silence and finally coming clean about the subject.  Ripken stated he didn’t want to just write his generic jersey number on the knob, so he wrote the obscenity to stand out.  When asked for his picture for Fleer, Billy claims he didn’t even think about the bat he was using, and the rest was history.

But how did this get past Billy, the photographer, proofers, etc?  Ripken claims he believes that Fleer may have actually enhanced the obscenity, claiming he simply didn’t have that good of handwriting, and that it shows up much too clearly on the card.  So, what really did happen? Who really did write it?  Who was to blame, and why were there so many different variations?  Due to varying testimonies, the collecting community may never know the real truth. 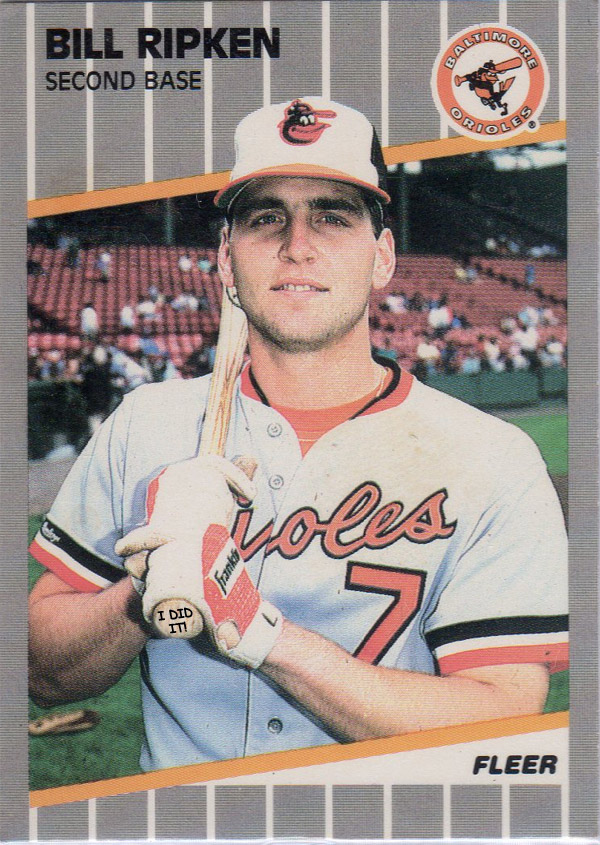 Card Companies Capitalize on Their own “Mistakes”

Another famous error was the ’89 Upper Deck Dale Murphy Reverse Negative.  Whether Upper Deck intentionally made this error and/or even continued printing them after its popularity rose is unknown, they did capitalize on it in their 2002 Authentics set, purposely creating reverse negative cards as short prints for collectors to chase.  More recently, Topps also did this by purposely created variations in their recent Heritage sets that had the appearance of gum stains on the backs of some cards – something that plagued collectors for years.

These errors and variations have great backstories, which to me, adds significant value.  I love a great story and mystery.

What is an error / variation … and what is not?

This question has evolved over time for many, and can largely be seen as subjective.  Some will say that a true error/variation is when the card proofer misses a spelling error, puts the wrong name on a card or photographs the wrong person. 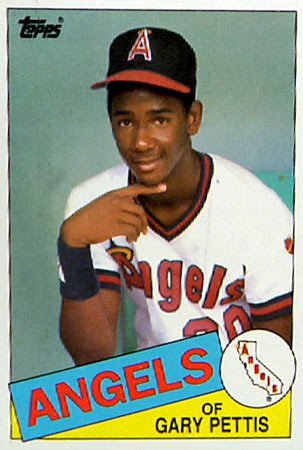 It is a fine card, I suppose … except it isn’t a picture of Gary Pettis … it is a picture of his younger brother.  Since this card was never corrected, this is of course, considered to be an uncorrected error (UER) so therefore, there is no additional value attached to the card.  You have to admit, there is a fun story behind it, though!  There are probably still a million of them out there.

What about cards that are missing a part of the picture or text due to the card company’s printer not applying all the ink?  Many consider these to be worthless mistakes and do not consider them true variations.  Among the most popular of these would be the 1990 Topps Frank Thomas missing the name on the front of the card (NNOF). 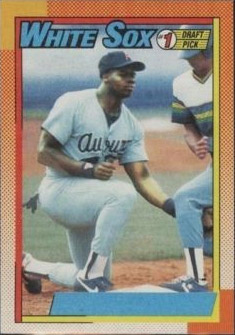 Anyone can see that this card should be noted as valuable.

A note on rarity:  It is estimated that between perhaps 200 and 500 of these exist, so while we would hardly consider a card with this quantity rare by today’s standards, finding a card with a quantity of 500 is a significantly tougher feat when sifting through a potential 5 billion 1990 Topps cards made.  You would have to go through 10 million cards to potentially find one!  Compare that to a 2015 Topps Dynasty card that has a print run of 10 (the highest quantity of a single card in the set) – where the entire production run is likely around 6,500 cards total.  That’s more like finding a needle in an empty drawer than a haystack.

The star power and production run both weigh in to the perceived value of this card (a recent copy of this graded 8.5 by BGS just sold for $3,800), but other lesser known cards can command a pretty healthy premium as well.

The 1990 Topps Frank Thomas wasn’t the only affected card in the set.  There were others as well.  Take a look at the graphic below from Beckett magazine, where the yellow stripe shows where the black wasn’t applied to several copies of each card in its path. 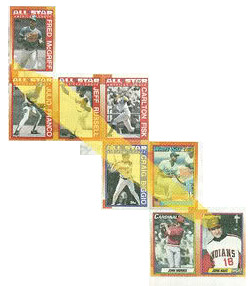 Every card affected in the line of the yellow stripe has a premium attached to it, and player, team & E&V (error & variation) collectors will pay well for them.

What Once Was Rare 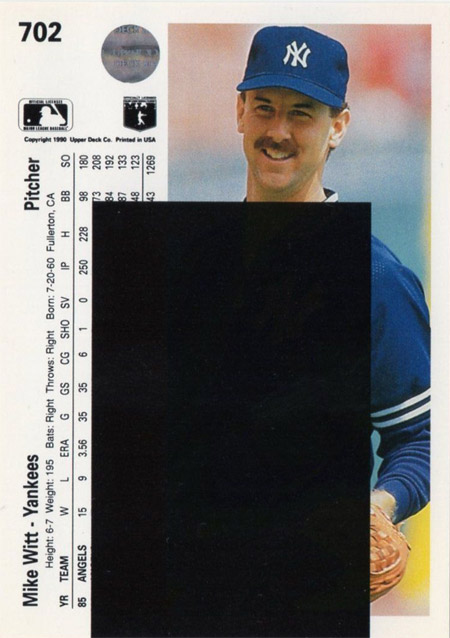 There is so much mystery surrounding this card, and it was previously estimated that only a small pile of these cards existed, until a collector recently came forth after having stumbled upon 800 or so of them at a flea market.  While it doesn’t make the card worthless, certainly there are not 800 collectors out there willing to support the astronomical prices that were once paid for this card.  One in June sold for $200, whereas one recently ended at $55.

Due to their popularity, errors & variations have certainly garnered a cult following, and they aren’t just limited to what mainstream checklists show, either.  In fact, various junk wax sets such as 1991 Topps have proven to be a hotbed for tons of variations, and master set collectors have been scrambling to complete their collections.

A quick search on eBay shows that a plethora of undocumented e&v cards are not only listed; they are selling.  These aren’t just limited to e&v collectors, either.  Many team and player collectors (such as myself) absolutely love them, too.  Collectors are always looking for something out of the norm to add to their collections.

Where do you draw the line?

Because there are now so many people buying and selling error & variation cards, you will always find people selling cards that most will find trivial at best.  Some cards might have a bit more of a bold text used or perhaps a piece of dirt landed on the printing plate, thus making a different colored dot on the border of a card.

There are even people taking a picture encyclopedia of baseball cards, cutting out the picture of each card and selling on eBay – sometimes for as much as the actual card itself would sell for.

I’m sure some people out there would try to get away with this gem if they could: 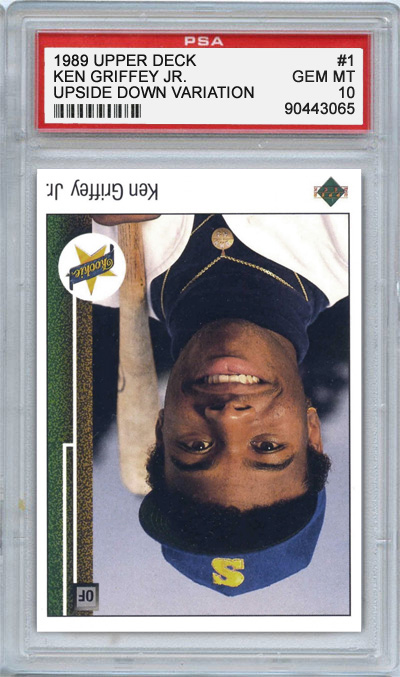 (Yes, you guessed it – it is just a photoshopped picture of an upside down Griffey rookie.)

So, where should we draw the line, as to what type of e&v should command a premium or not?  The answer is this:  It is different for everyone.  For me, I have a set of “rules” that I like to follow.  Here are a few of them:

To me, the more variations of a single type of card, the more enjoyable I find my collection.  Here are a few runs of variations I have from my website: 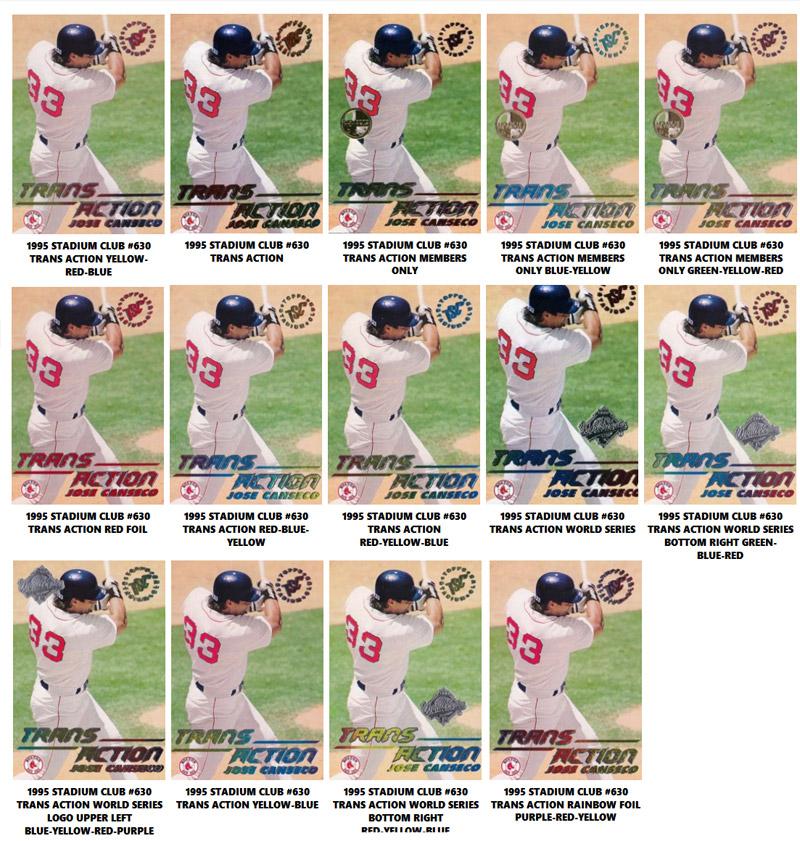 1988 Topps – Some customs I created (what did you expect?), some errors, some buybacks, some more trivial variations – and all loved. 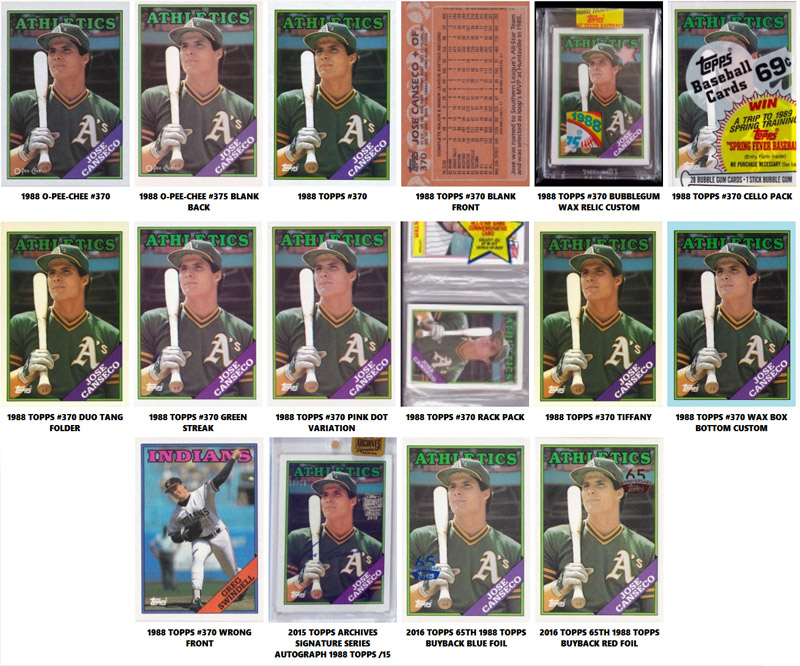 So, the next time you are wondering what a true error & variation is, perhaps you should instead ask yourself what you would be happy with adding to your collection.