Customs, Patch Peek-a-boo and How to House Annoying Sized Cards

“They look too much like the last several years.”

“These seem to be a bit boring.”

“Maybe it is time for them to retire this line.”

I’ve heard a lot of criticism of the 2016 Allen & Ginter line, and I was actually not too terribly excited about them myself. They just seemed to uninspired to me.

And then they hit eBay.

As a Canseco collector, the pictures the card companies use are important to me, and Topps hit the nail on the head. The 2016 base rendition is my absolute favorite base A&G of any of them.

Oh, and did I mention boxloaders? Yeah, they have those too.

A lot of fun stuff! The minis and boxloaders are not for everyone though … especially those who still suffer from Eightyninebowmanitis. 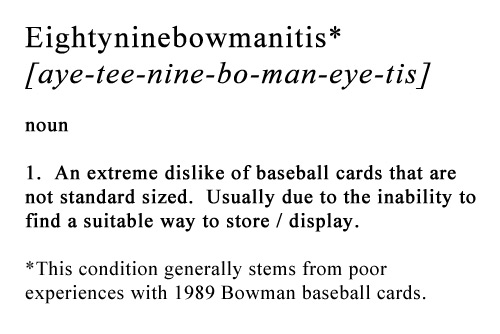 So, with that said, I was able to hit it big with A&G so far. I still need the autographed mini #/10 and 25 as well as perhaps a few Ginter X variations (more on that later.)

Before I forget, I did make a few A&G customs from one of their older sets….Star Wars Style …. 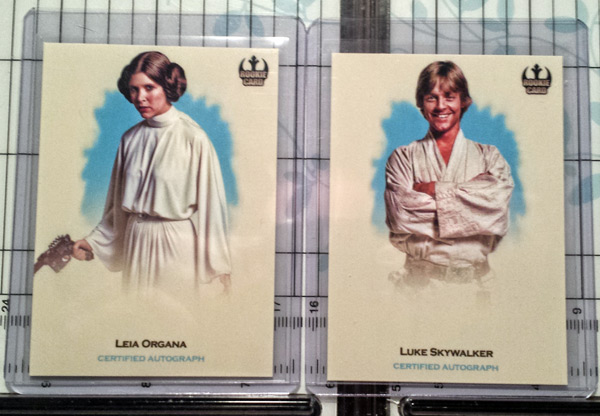 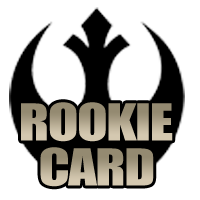 I also had the pleasure of doing a few other customs recently: 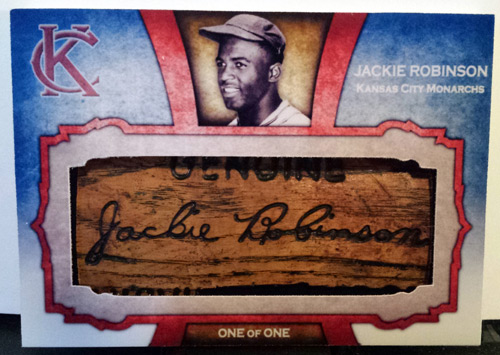 And this Ryne Sandberg that will hopefully be signed soon. 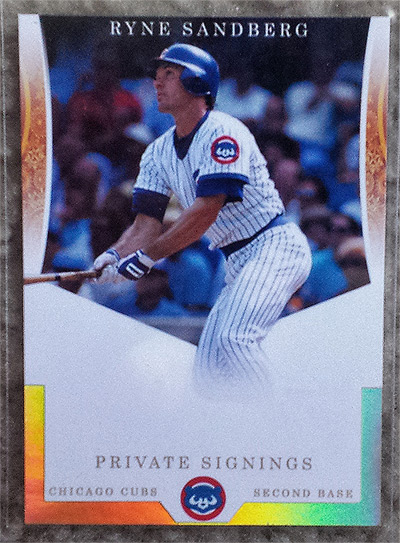 Here are the two box loaders I picked up: 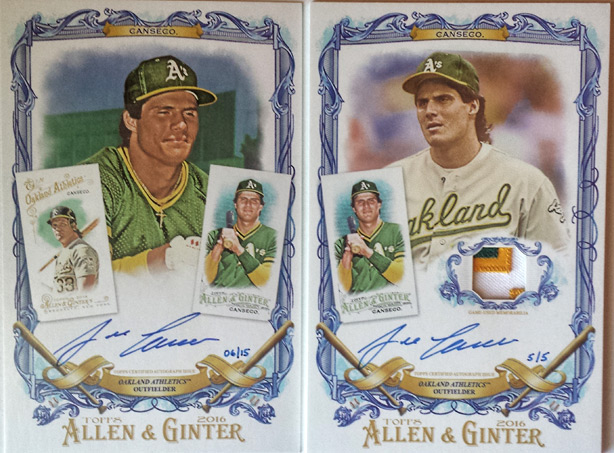 In my opinion, these two BLOW AWAY all the other box loaders that they’ve made of Jose. The colors, the use of the minis, etc. The signature version is GREAT …. however … the auto patch is one of my favorite cards in my collection. The problem? THE SIZE. This sucker is THICK. I decided to construct my own top loader for it because I couldn’t find anything out there for it.

It was surprisingly easy to make one, so I figured I’d show you …

First, take 3 5×7 top loaders. You will want to cut out the entire visible portion (the see thru area) of one of them, and just one layer of the other two: 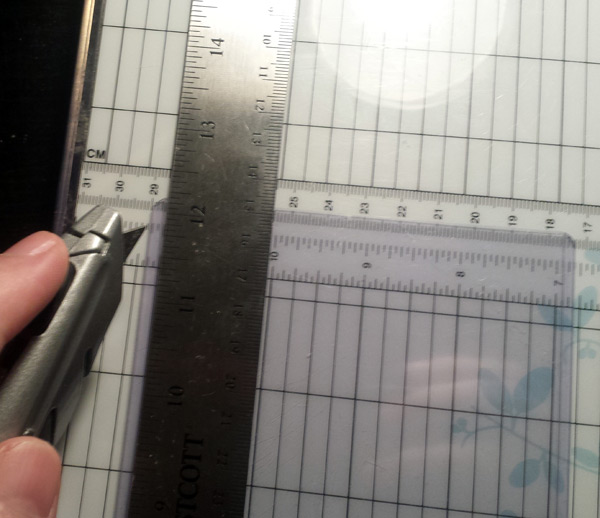 You are left with a U-shaped piece of plastic, and 2 top loaders that only have one side. Glue them all together (super glue, spray glue, whatever you want.) Here is what I got. See the difference in thickness? (Below is comparing a regular 5×7 top loader, vs. our custom 5×7 Allen & Ginter Boxloader top loader.) 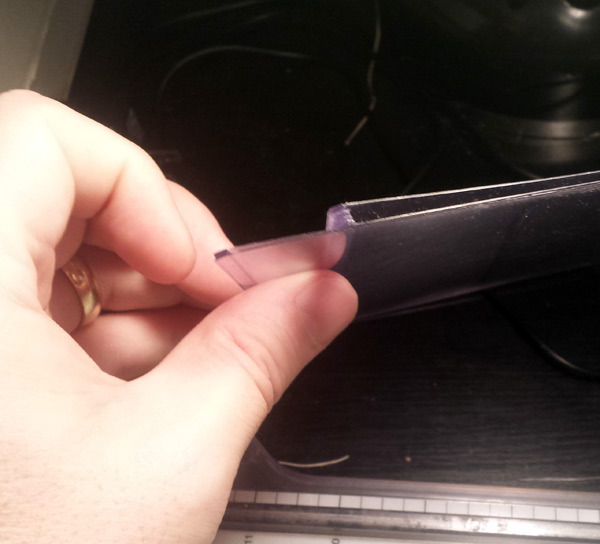 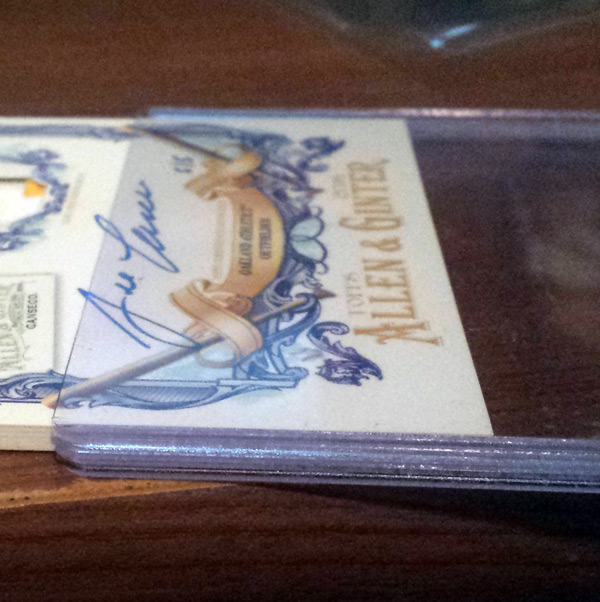 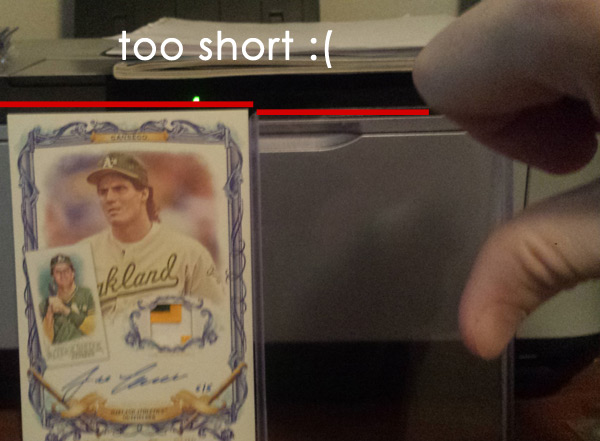 What is that they say about measuring twice and cutting once? Fear not … I have some top loaders that really do measure 5×7 on order so I can make one that will work this time! 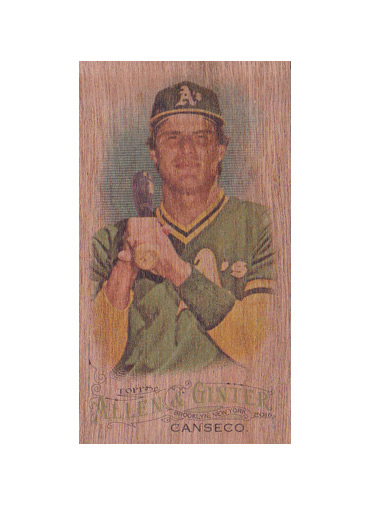 I love it! The problem? Lack of holders. I don’t really like the mini holders, because it doesn’t look good in my box. I heard they are coming out with the one touches for these VERY soon, which I will be a buyer for.

Until then, I found out a cool way to use existing one touch holders. All you have to do is cut a penny sleeve short … 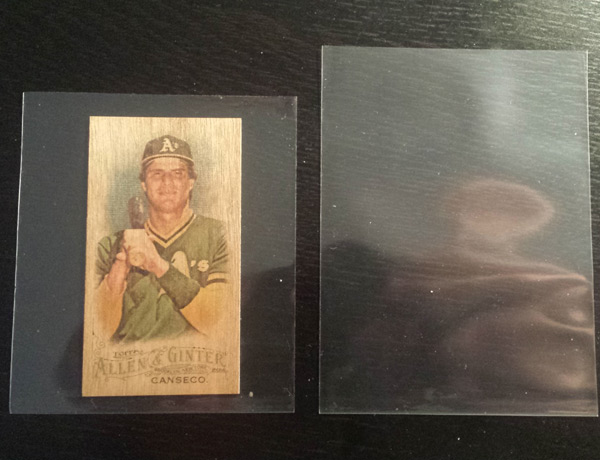 …and center it into the one touch. The sides of the sleeve will be clamped in place. It holds them safely in the middle of the holder. Here are my 2 wood minis together 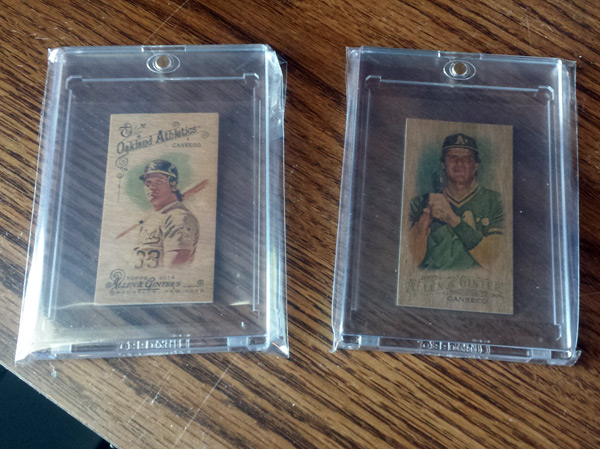 I have my boxloader displayed in the hutch of my desk. As I was waiting for my wood mini to arrive, I thought about how cool it would be to display the wood 1/1 minis with the box loaders, so once it arrived, I had some fun. 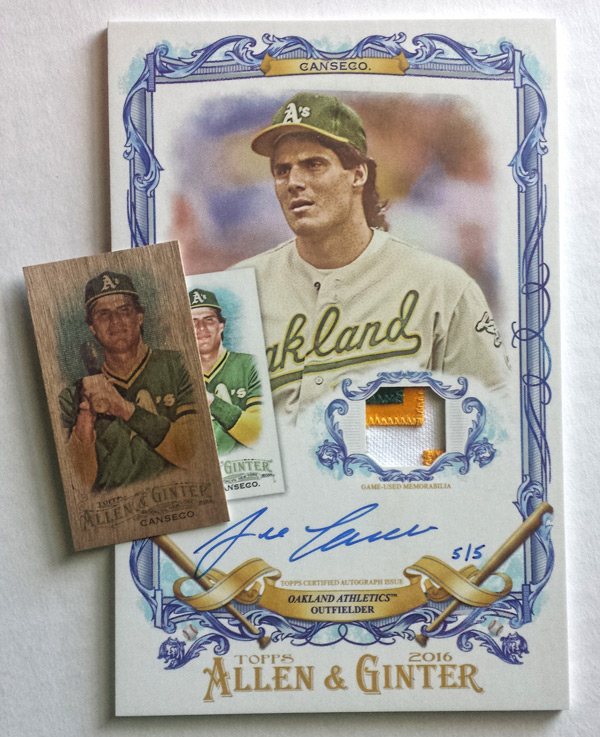 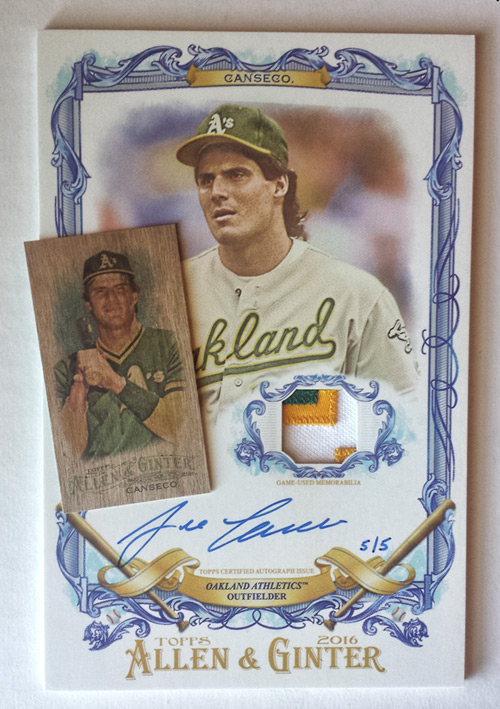 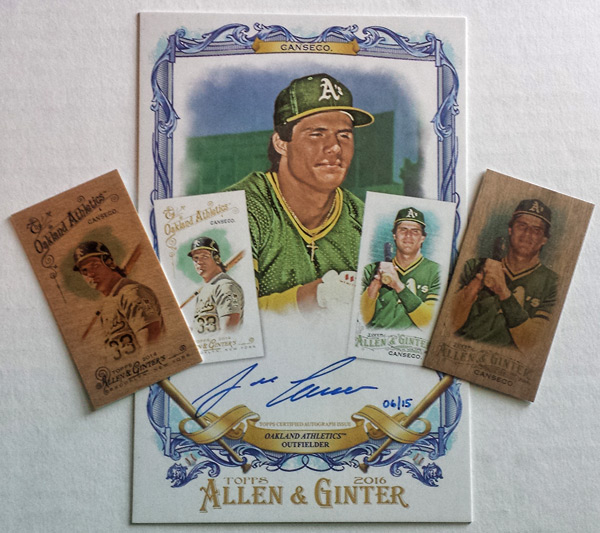 I may be a bit weird, (ha!) but I love arranging cards for pics to look nice. Here is my Dynasty run (I have one more I need to add in at some point.) 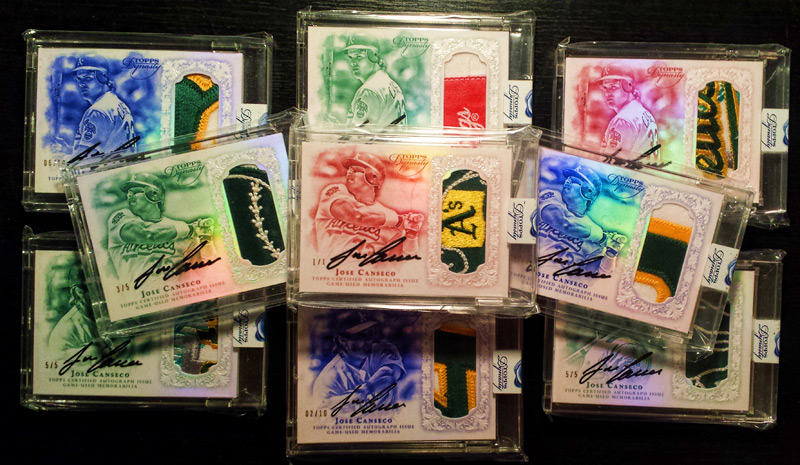 One final thing to note about my new pickups. The boxloader that I love so much was lacking in the patch department…just a tad. So much gold & white, but not much green at all. I love that all 3 colors were represented, but it just felt like I was getting patch scrap leftovers. 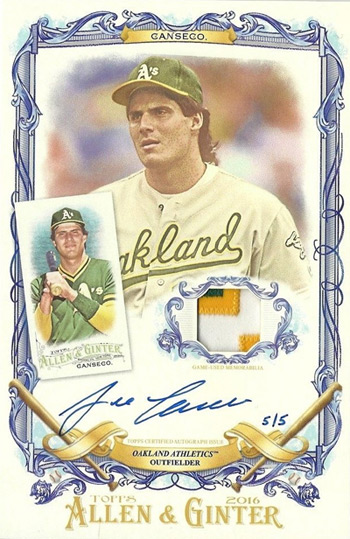 I had considered doing something about it by either swapping it with some player-used material, or just tugging on the existing patch to see what would happen.

I decided to take a little heat to the back of the card with this bad boy: 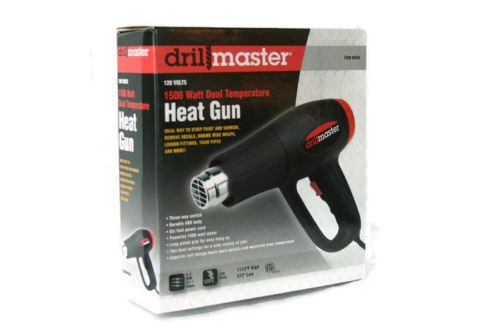 …to see if I could bring out some more green. Shown below, you will see how there was some extra green hiding behind the card. I just loosened up the glue and pulled it down a bit. 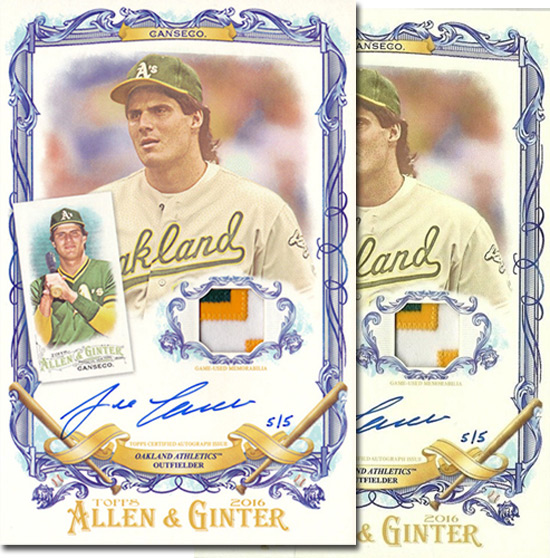 It is amazing how much more I like this card now, and all it took was a few centimeters of extra patch to show for me to be happy. Recently, I’ve seen some cards hiding a lot of extra patch material. Take for instance, this project I just wrapped up not too long ago. See these two damaged Tim Duncan patch cards? The left side shows the patch in the card, and right side shows what was covered up.

Here is what was made of them: 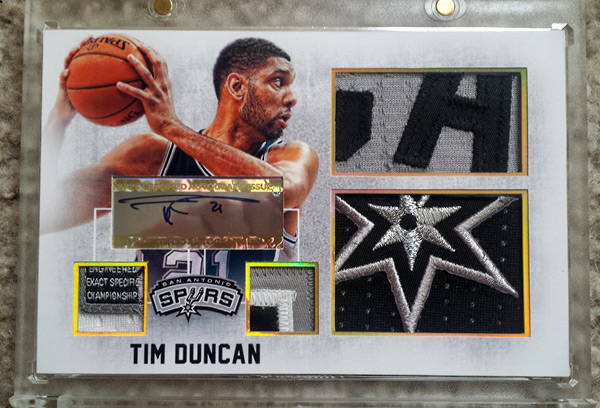 I love how the Duncan turned out! Spurs fans sure are going to miss him.

As for Allen & Ginter X, I was bummed they didn’t have any of Jose in the past. When my friend (and Jose’s friend/warm up pitcher) asked me to make a card of him for the team he was with, I wanted to do something that looked like an A&G X. 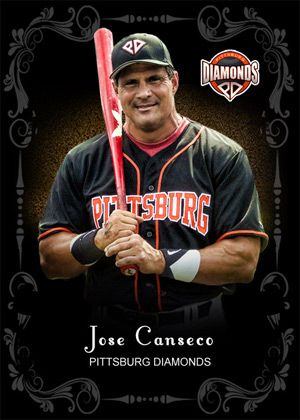 Ironically enough, the team he is shown playing for on this card is the team he is playing the entire month for right now. His first game was last night and he went 2-4 (woot!)

Thankfully, There IS a *real* Ginter X card of his this year, and I was able to pick up a silver autograph of his (incoming). As I was texting to the person who sold me it, we discussed production numbers. When giving his two cents, he said “when I signed mine, they only gave me 25 of them.”

I didn’t know what he meant until he sent me this picture: 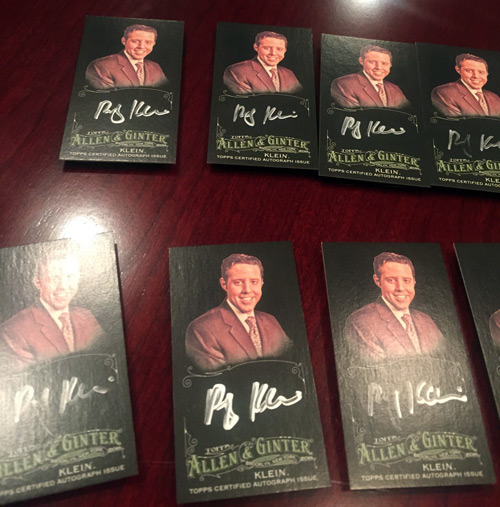 His name is Rick Klein and he is actually in the set! He is political director of ABC News. It isn’t every day you get to meet someone with a real baseball card! #sojealous.

He texted me yesterday while he was at the National and said he picked up a Ginter X Canseco for me -how cool is that? Thanks Rick! BTW If you have any rare Dale Murphy cards, please let me know – he is a Murphy fan and I’d love to hook him up with some good stuff.

His aren’t the only famous eyes that are peeled at the National for me this year though. The one and only Sumrtop has also been on the lookout for me. A BIG shout out and thank you to my brother in custom cardboard for that!

As for Rick, it sounds like he does radio, and though this is a poor segue for a shameless plug, I had my 15 minutes of fame behind the microphone this past week by being interviewed on Beckett Radio. They even had me do a “spot” (saying “This is Tanner from TanManBaseballFan.com and you are listening to Beckett Radio”) which will apparently be aired throughout various future shows. If you are interested in listening to it, you can find it here: https://soundcloud.com/beckett-radio/8-3-tan-man-baseball-fan-trout-watch-and-one-final-nscc-segment – My segment starts at the 10 minute mark.

Beckett Radio has had some pretty big names on it from hall of famers to baseball card company CEO’s. I’m happy to have been able to join them. Thank you, Eric Norton, for having me on!

That is all for now. Have a great weekend everyone!