This last weekend was not only Father’s Day; it was also the weekend of the card show! As always, I set out to hunt for some Canseco cards for my collection. As I got there, I could immediately tell that this was a hopping place. 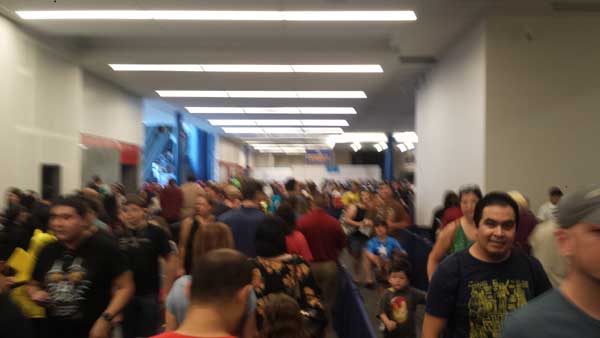 Something was much, much more different though. There must have been something in the air, because the show-goers seemed to dress a bit odd. 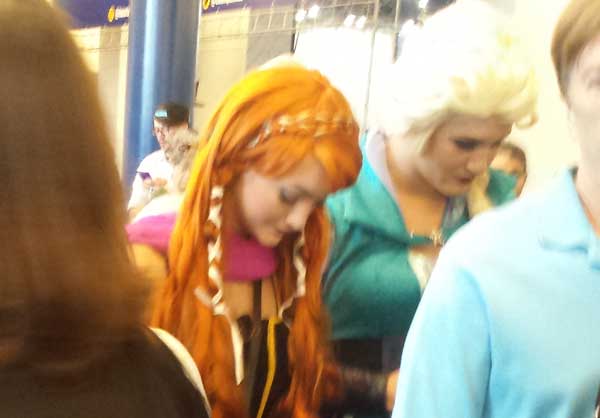 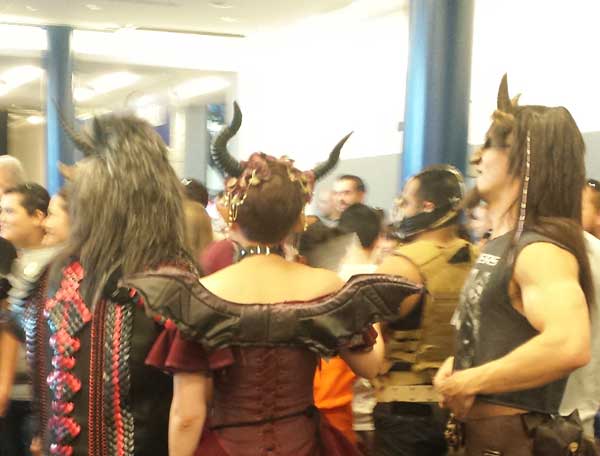 The selection seemed a bit slim… 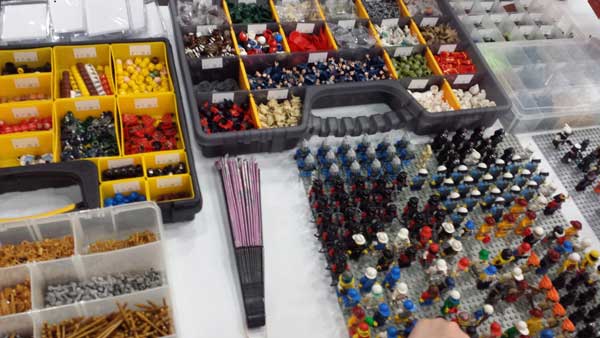 But TONS of people flocked to the quarter bins… 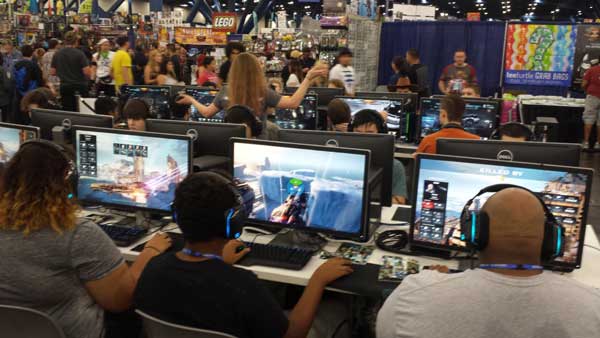 Hey, at least there were some decent signers… 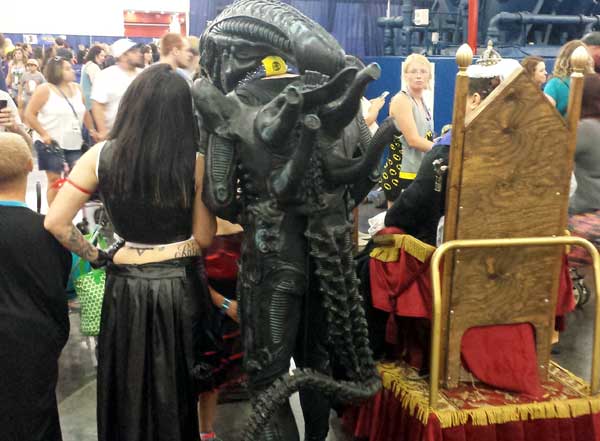 I knew something was off when I asked this dealer if he had any rare Canseco cards, and he decided to strike a pose while singing with his shirt off. 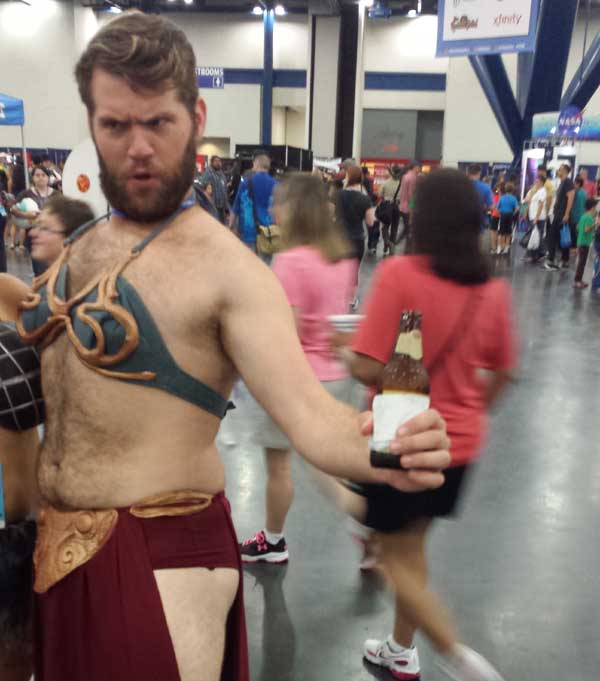 In case you didn’t know already, this was not the card show. It was COMICPALOOZA. Yes, friends. I have apparently stepped over to the dark side. I chose a comic-con over a cardboard-con. A very good friend of ours who works the show as a sign language interpreter bought us tickets.

(This is her and Lou Ferrigno at the show.) 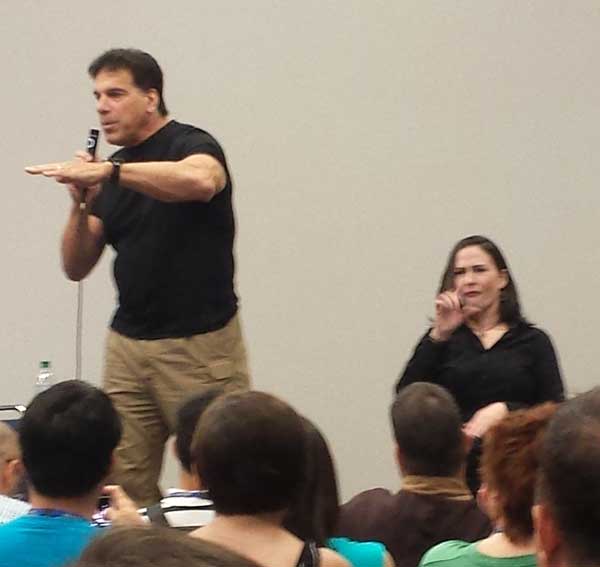 I definitely hold firm to the belief that the world would be a better place if we all dressed up in the “real world” like people do in places like this!  The dashing young man getting arrested by the 501st Legion is my son. 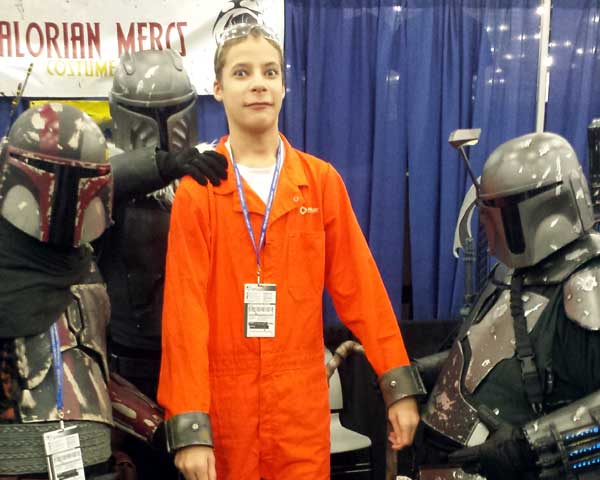 Our friend knows Ming Chen from Comic Book Men (Remember this booklet I made a few months back? Yeah, that Ming Chen!  She didn’t know him when I made it.)

He was a signer at the convention so she introduced us to him.  (This is my son and wife.)

So while I didn’t go to a card show to pick up any cards for the collection, I did make some.  (Go figure!)

First up, is one I did a while ago, but finally decided upon the player worn patch piece to go with it. 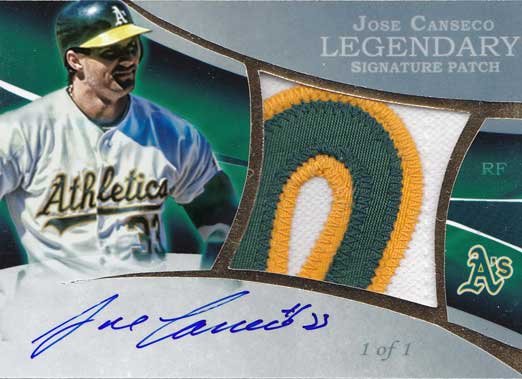 The next one is a card that never was.  Jose’s first card was a 1983 Fritsch.  What many people don’t know is that he played for a team called the Idaho Falls A’s (and a minor league team named the Miami Marlins, too!) back in 1982.  The 1982 TCMA Idaho Falls set didn’t included him.

Well, now he has one. 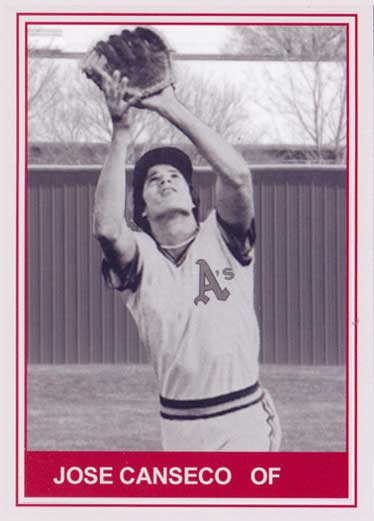 Coming up with old pics are tough as nails, so I used a picture from his high school yearbook. 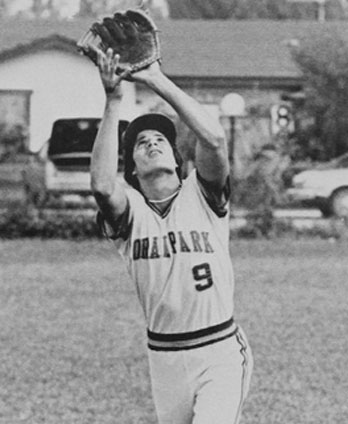 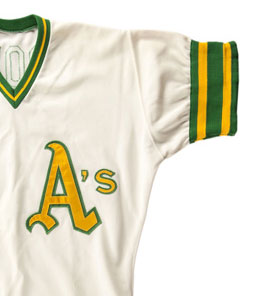 Remove the parking lot and coach’s truck in the background 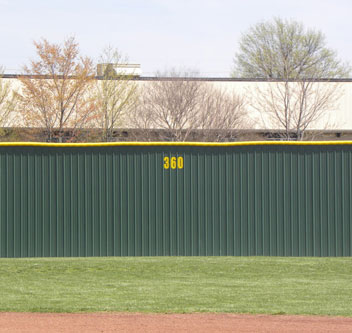 It may not look like much, but I love it, as it fills a hole in my collection that couldn’t be filled.

I also did a few others.  As 2016 Finest came out, I was very happy with the Intimidators set.  Sure, I was bummed that it only came in regular, orange, red and super … (If anyone runs into the superfractor, PM me!)  I figured I’d have some fun and make another version of it. 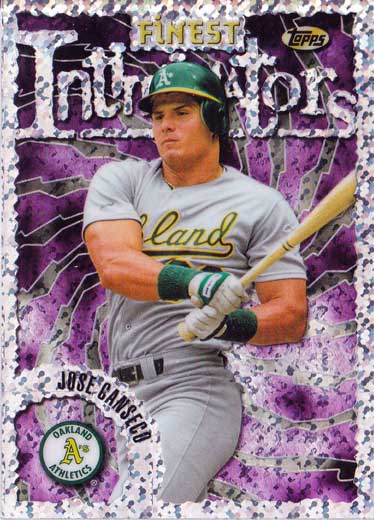 I think it goes well with the others! 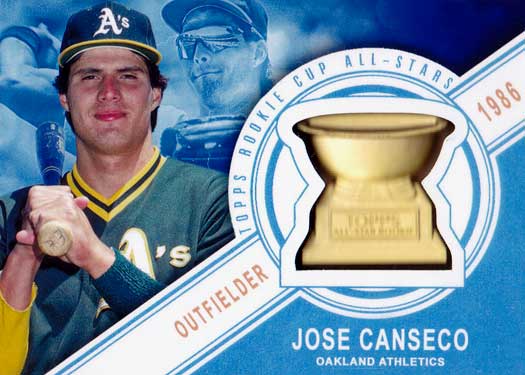 To be honest with you though, that isn’t what I have been putting a lot of time into lately.  These past several months, I’ve been working on something huge for my collection.  Something that I am very, very proud of.  Something that I hope you will be able to benefit from as well.

Like many collectors, I went through several stages.  My checklist started as a handwritten document (which I could barely read anyway, because I have the quite possibly the WORST penmanship on the planet!).  Then I graduated to a printed MS Word document.  From there, I went to MS Excel.  Each stage took a ton of work, but allowed me to easily share with the world what I had and what I needed.

This past year, I took it to another level, and made my entire checklist searchable online.  I had dreams of people rushing to their computers to type in www.CansecoCollector.com to see if they had cards that I needed.  While it didn’t *quite* go down like that, it did help me to quickly see what I had/didn’t have if something cool popped up online.  The problem?  It took pretty long to load, and was. so. boring.  I mean, thousands of lines of text just doesn’t do much for anyone.

So, this is where I killed two birds with one stone.

Again, like every collector, I had thought long and hard about how to store my collection.  I didn’t want to top load ALL my cards and put them in boxes, because they would be hard to see/display whenever I wanted.  I wanted to put them all in binders, so I could easily look at them.

On the other hand, I KNEW I wasn’t going to put all my cards in pages.  I’ve seen far too many left column cards bite the dust thanks to over stuffed albums.  Plus, since I am BIG into organization, what am I to do when I fill up an album, only to find a variation I didn’t know existed?  Knowing me, that would mean taking out all the cards in the binder to make room for the one I needed (which would probably never get done.)

So, that is what I did!  Thankfully, a former supercollector I purchased a lot off of had several already scanned, but I still had to scan thousands of items, name everything and setup/modify the searchable database. 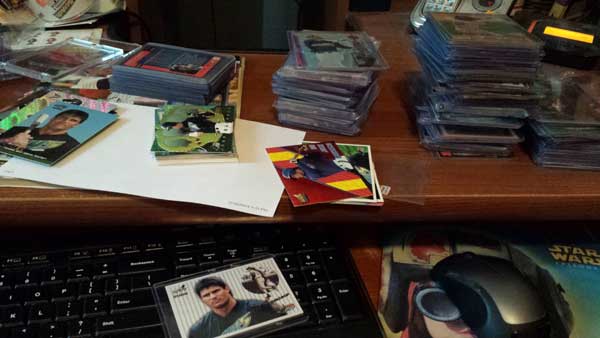 This scratches two itches for me:  1) It allows me to share a fun visual checklist with someone that can quickly & easily check against to see if they have a card I need, and 2) It allows me to enjoy my cards as if it were in a binder – only better.  It also allows me have fun looking at my rainbows, and line up my variations in a row.

I took a pic of all my 1986 donruss rated rookie variations the other day, just to see what I had, and it was a pain gathering them all.  I had to go into my 1986, 2001, unopened pack and buyback boxes to retrieve them all.  Heck, I even forgot some of them.  Now, I can just run a quick search:  Then … BAM!  It even tells me the amount of items. 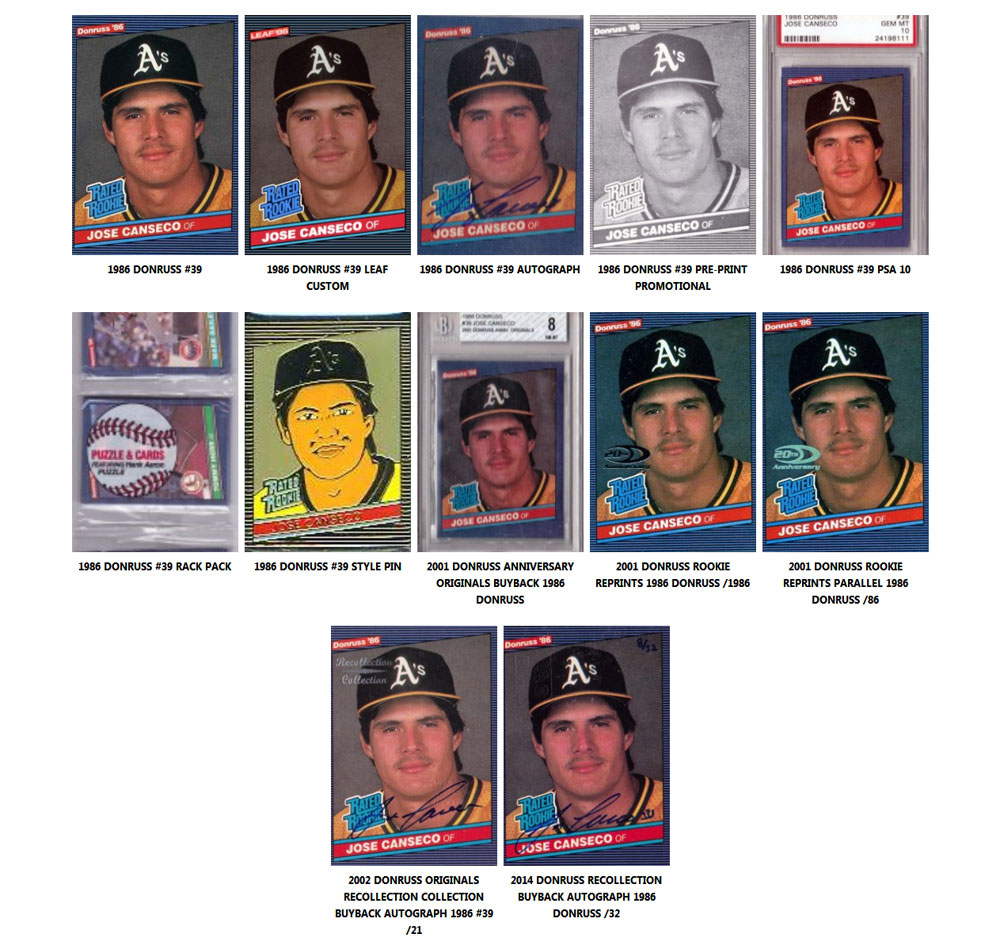 What about the highly coveted 1992 Topps All Star card?  Sure, most think regular, gold & gold winner.  Here is my run…all 11 of them: 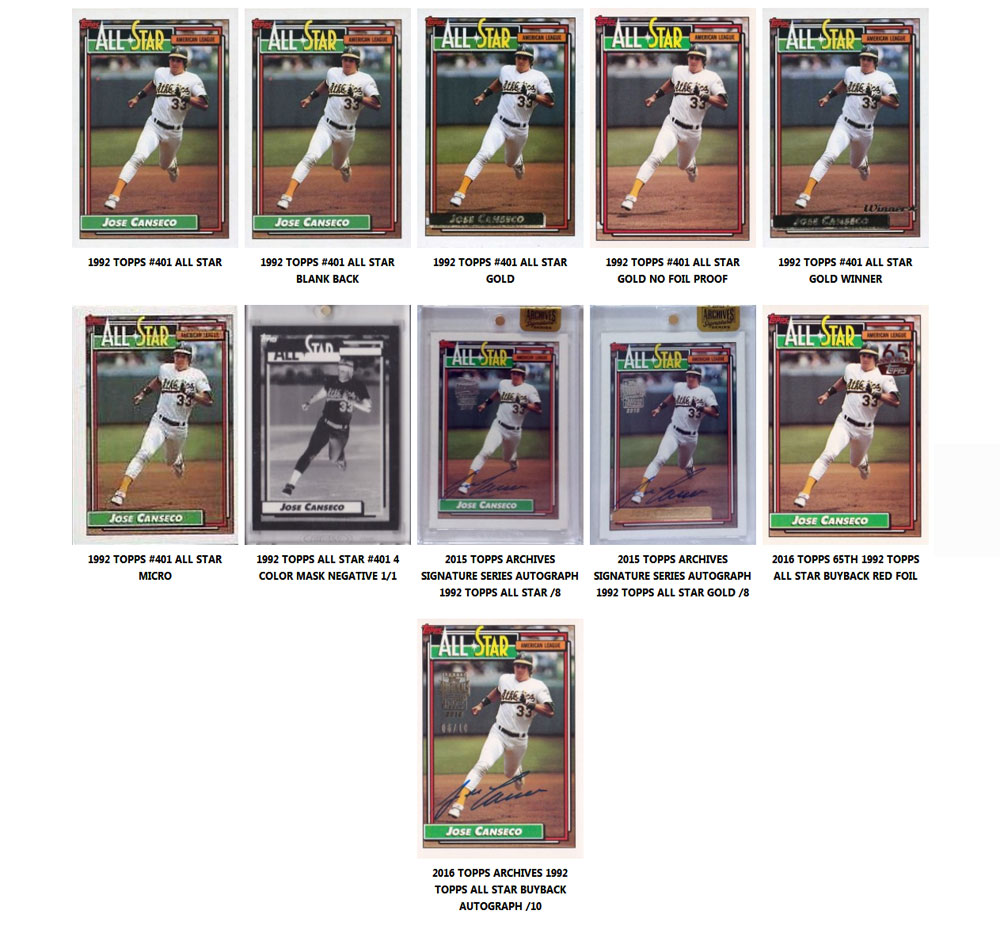 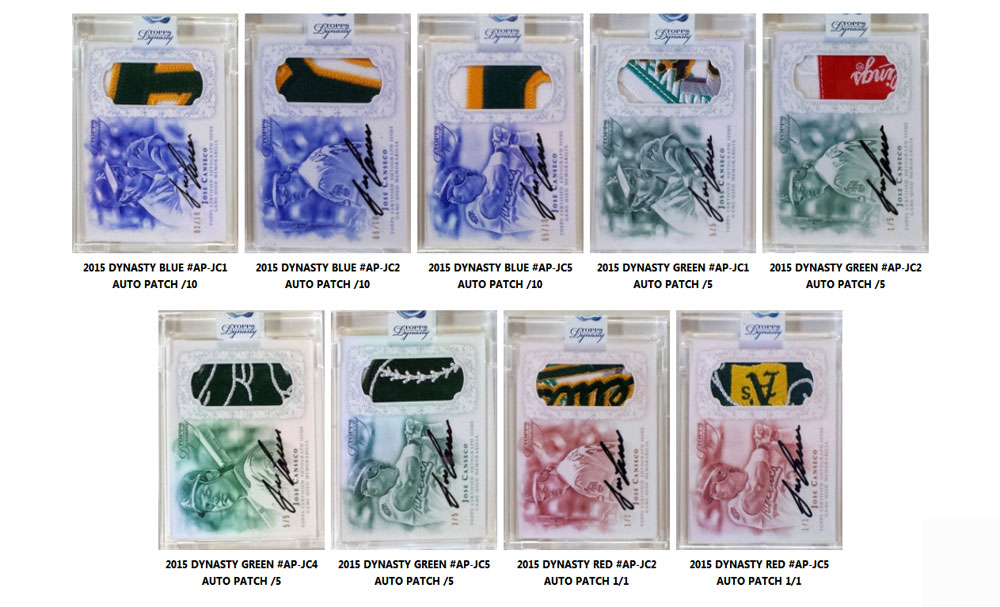 Of course the most fun for me is to run a search to show only my patch cards, autographs, 1/1’s etc.  The search capabilities are very flexible, so I can almost pair up anything and everything to show together.  It even has the capability of setting tags, so you can automatically call up my favorite cards, very rare cards, customs, etc.  Speaking of customs, this has been great to allow me to fully integrate my customs into my collection.  They look right at home with the “real” cards!

You can try it out at www.CansecoCollector.com – if you like it, you are welcome to check out the tutorial I wrote here on how to set it up for your own collection!

Oh, and another thing:  Want to take a screenshot of an ENTIRE page all at once?  Download “Awesome Screenshot” for Firefox.  Great stuff!

As collectors, we don’t just want to buy cards and shove them in boxes.  There is a much more social element to it all.  We want to share our treasures and hear the feedback of others – just look at all the “mail day” threads online.  Speaking of which, these past 1-2 weeks have been EPIC in terms of PC additions, primarily thanks to these two HUGE hits! 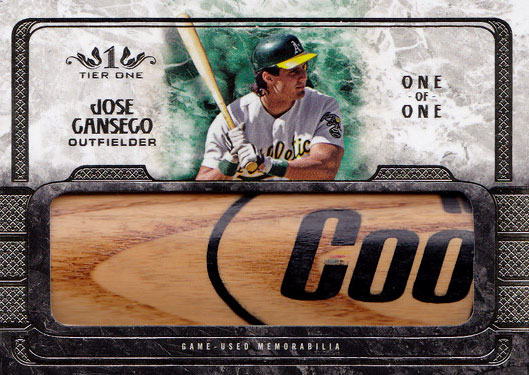 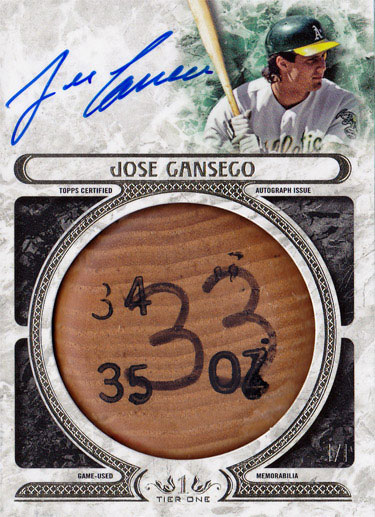 So, without further ado, this is the moment I’ve been waiting for.  The moment I get to finally share my ENTIRE collection with you.  Something that I have spent COUNTLESS hours not only assembling, but also loading up online…and I’m glad I did!

My collection simply would not be what it is without you all telling me whenever a cool Canseco pops up somewhere online.   I cannot thank you enough!  PLEASE keep it coming!

And now, friends … the heart of my obsession.  My collection … in its entirety.  (Until the mailman comes today, that is!)  This is what happens when you only collect one player, and are obsessed with baseball cards!

This could possibly be the longest posting in the history of forums.

Still with me? The good stuff is more at the end…but let’s face it. You aren’t even halfway there yet, so you may not make it.

What would you do if I had a pic of game used underwear? I don’t have any…just asking.

So, there you have it. My entire collection, as seen on www.CansecoCollector.com . Thanks for looking/reading. As always, if you come across a rare Canseco cards, let me know!