A Custom of a Different Kind

Know what I love?  Making customs of cards that don’t exist or were never made.  It adds a certain layer of depth to my collection.  I suspect many of you who have customs in your collections feel the same way.  A ’69 Topps Garvey, ’66 Topps Ryan, 81 Fleer Ripken, etc.

In the past few weeks, I have focused on creating a few cards that never existed and modifying others.

I found this autographed 2011 Goodwin Champions on an advertisement sales sheet for the set.  It didn’t look familiar, so I checked my collection.  Not there.  I also checked Becket.  Nowhere to be found!  The picture was showing, so the intention was for it to be created … it just never happened.  Because of this, I decided to make it myself.  The next time I get a chance, I’ll get it signed! 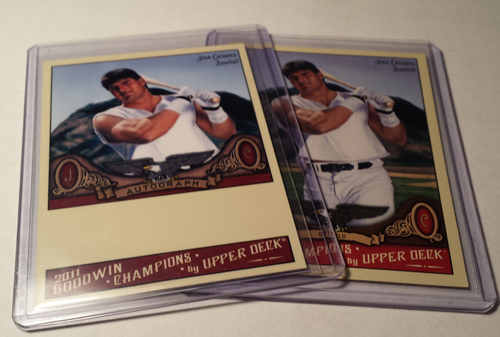 Another “fantasy card is this 1986 Leaf Rated Rookie Canseco.  It was never officially made, so I figured why the heck not?  This makes it my 10th different “type” of 86 Donruss rated rookie Canseco.  (The other 9 being “real”.) 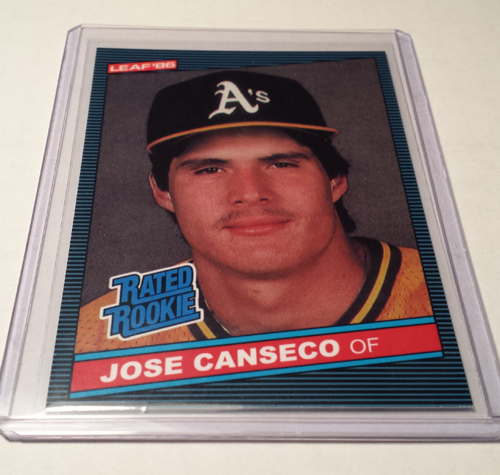 I’ve been meaning to try this… 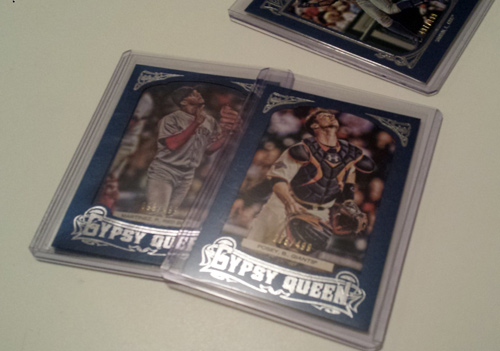 Sadly, the Posey didn’t make it, but the Pedro did just fine. 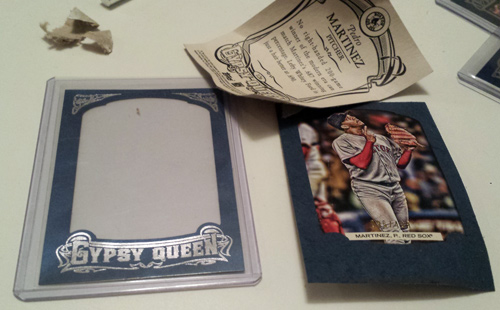 I also used another year GQ for the left version.  The original player’s name was written in foil at the bottom, so with a LOT of patience and practice, I was able to remove it!  Two beautiful framed GQ customs.  The frames are a HUGE pain to get off. 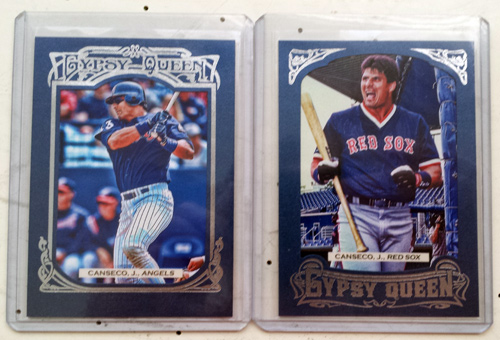 The ’15’s ended up good too, despite the goofy left bubble thing that Topps decided to cut out.  (Did you know that behind the frame is a standard base card?) 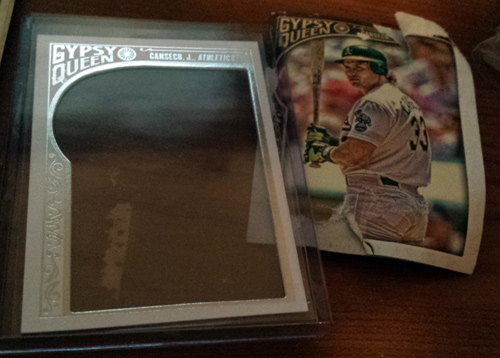 Here is my custom (left) and a real one … 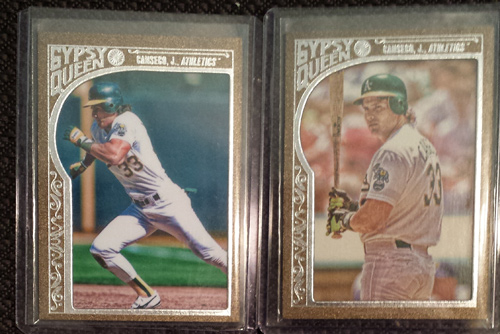 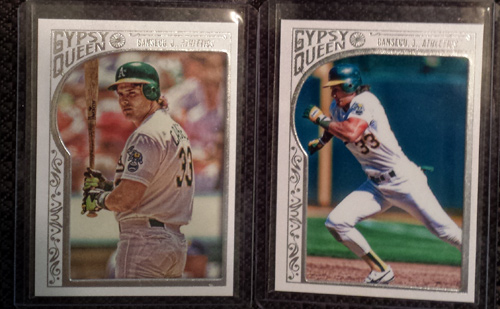 Last, and certainly the most challenging this week was something entirely different. 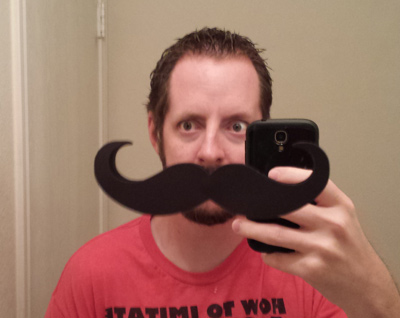 Yes, I even had to do a bathroom moustache selfie before I could begin.  (The ‘stache was on the mirror from my son decorating for our party.)

I caught wind of something truly unique.  The artwork of a vitamin box for a product that was never released.  Talk about an interesting collection piece!  Not only was it the artwork, it also had all kinds of writing all over it as instruction to the designer on how to perfect it. 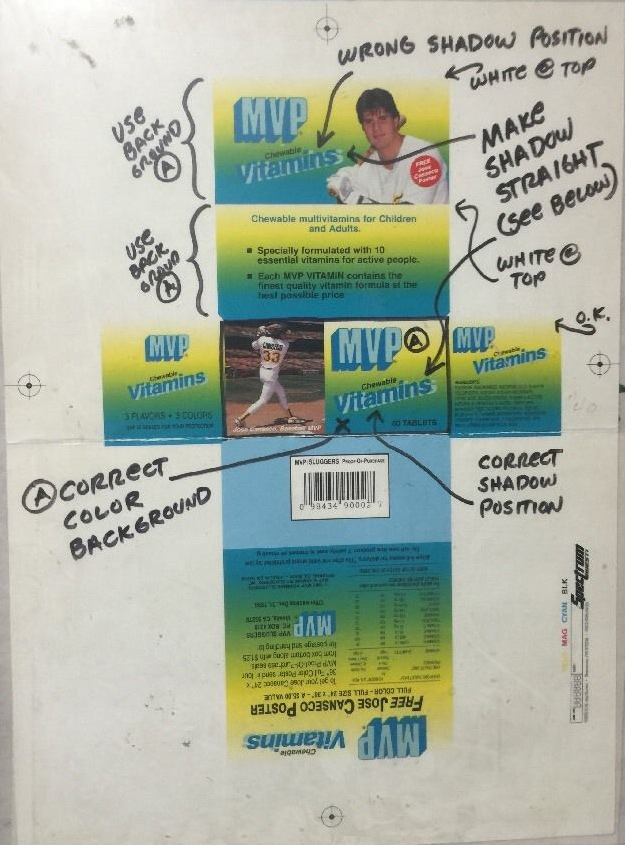 As fate would (not) have it, the product never made it to market.  Man, if it ever did, I’m SURE that I wouldn’t have had any issues taking my vitamins as a 9 year old!

The person I picked this up from said his uncle was working closely with Canseco and his PR guys, but unfortunately the product never came to fruition.  This piece was in his uncle’s collection until 1991 and ultimately given to the person I acquired it from, who had it for 25 years in a frame.

Simply put if this piece were mint with no writing, it wouldn’t be nearly as interesting to me.  It makes me wonder … why was this product never made?  Was it dropped because of circulating steroids rumors?

We may never know, but I’m very happy to have it in my collection.  A TRUE 1/1 in every sense of the meaning, and fits my collection perfectly by intersecting my two loves for the hobby:  Canseco and obscure baseball memorabilia.

Ever since it has arrived though, I have been plagued with the thought “what would this product have looked like if it were made?”  There is a LOT of clean up to do, and heck, I’ve never made anything like this before.  It was all so very intriguing to me, so I figured I would give it a go. 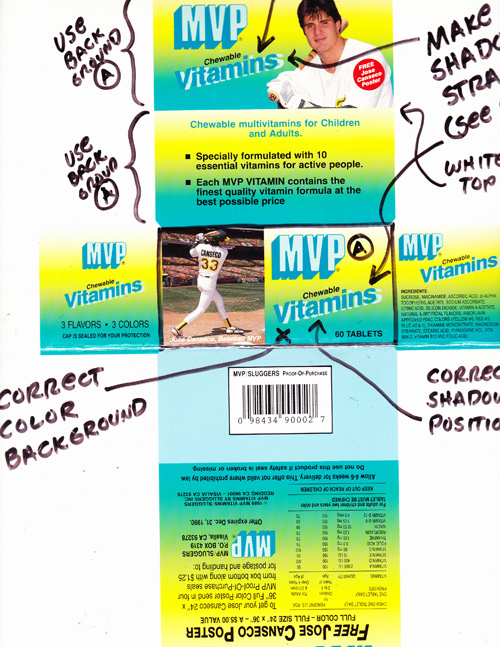 After spending a lot of time, restructuring, redoing, touching up, etc.  I came up with a clean copy of the above.  Much better, yeah? 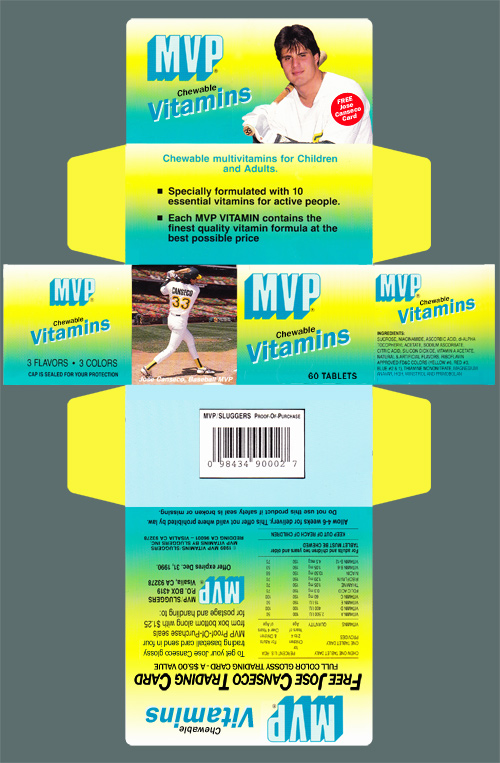 It you compare them closely, you will see that I added “flaps for the box to close.  I also changed the “offer” on the front from saying “Free Poster” to “Free Card”.  That is much more interesting to me anyway 🙂

Here is my printed clean version next to the original.  I had to create the top flap as a separate piece. 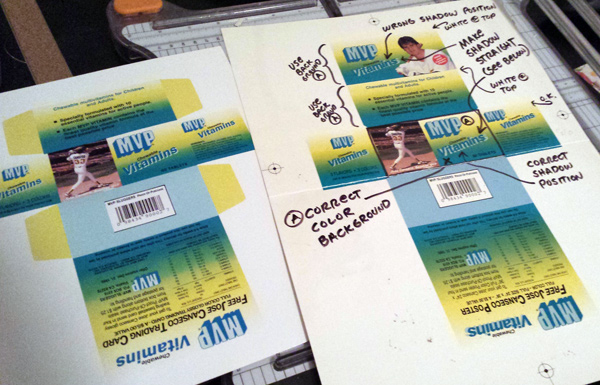 Cut out and scored, ready to be assembled:  (Okay, maybe it took me a *few* tries to get it right!) 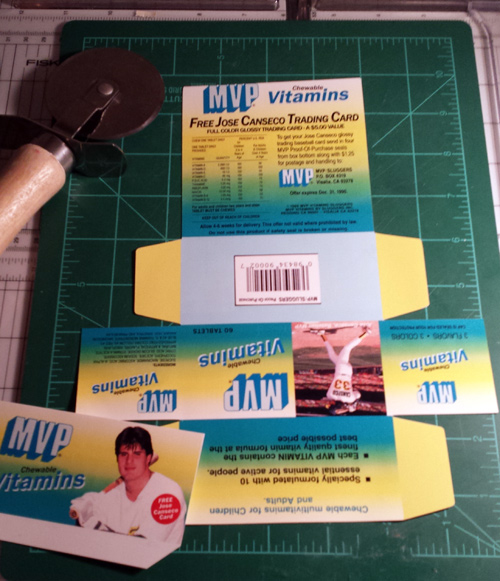 Did I mention I messed with the ingredients?  🙂  The last 4 ingredients are a part of what Jose’s steroid routine was as per a website I looked up.  I couldn’t resist! 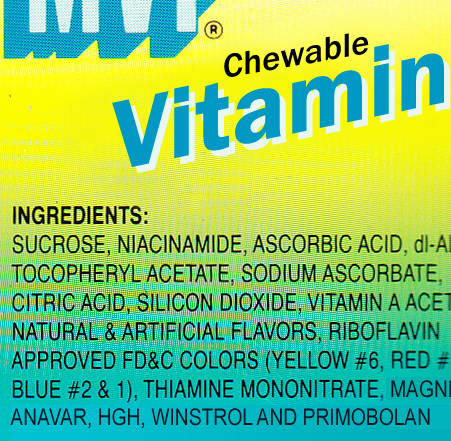 When all was said and done, here is what I was left with … 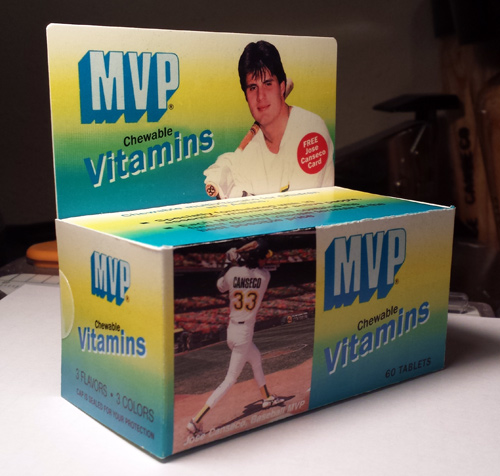 It looks great in person and looks / feels like it came off the shelf from the store in 1989. 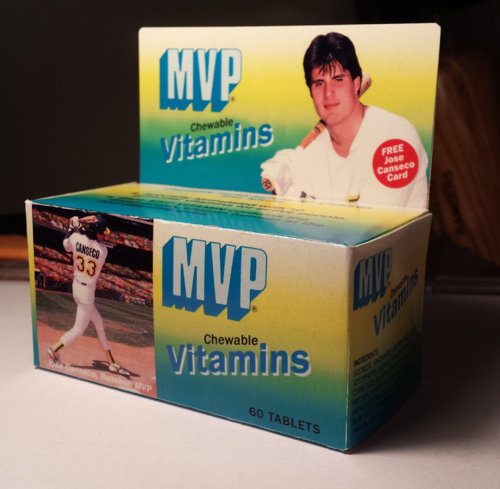 Even the back turned out awesome! 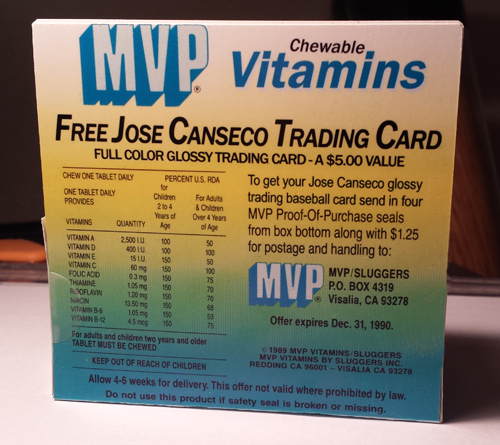 I know that this is supposed to be about the artwork for the box, but I couldn’t resist creating a bottle as well, using a $1.50 donor gas-x bottle from the Wal-Mart clearance aisle. 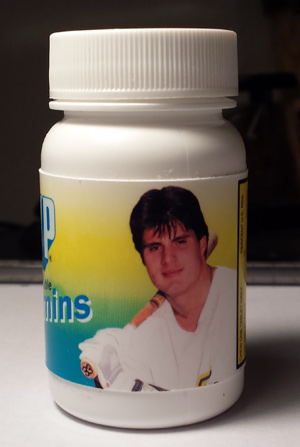 The label was difficult to line up. 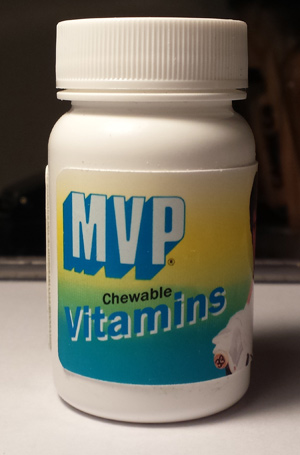 I made the expiration date 8/92 … the month he was traded to the Rangers. 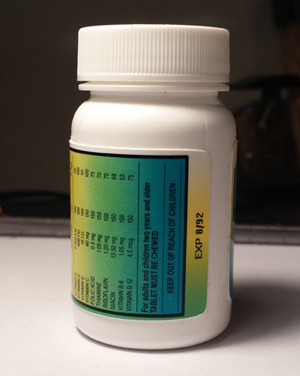 Why make this bottle?  Simple … because it can now hold these: 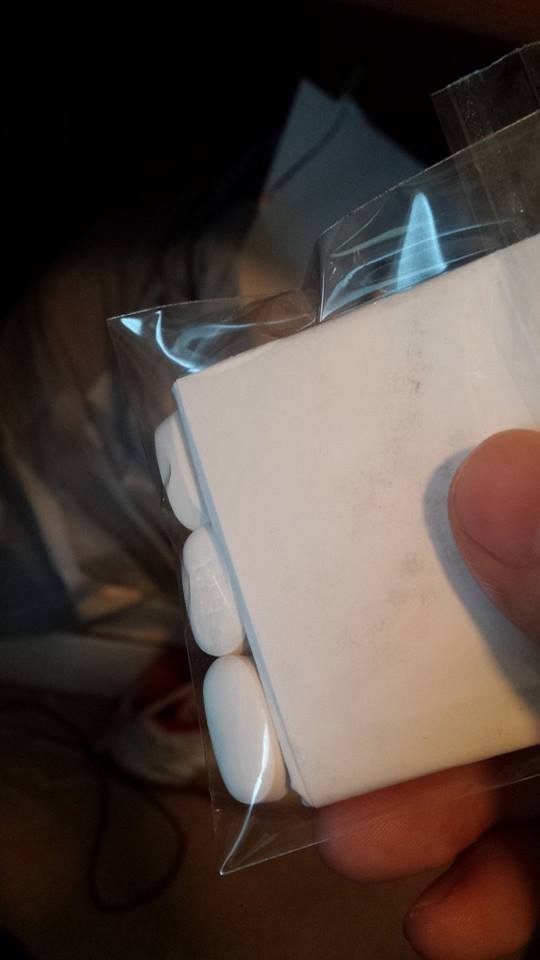 You remember what these are, right?  C’mon, sure you do!  They are the pills that were in the pocket of a game used batting practice jersey I picked up last year!  A refresher can be found here if you are interested:  http://goo.gl/Mmrrp3 – In my opinion, the best thing to put in a bottle of Canseco vitamins are pills that actually used to be Canseco’s!

Last but not least, cardboard is king in my collection, so I just had to make the redemption card!  I wanted to use the picture from the front of the vitamin box, but the picture was just too small.  Then, I remembered that I had seen the picture before.  Sure enough, it was used for a card that came with a board game about 25 years ago. 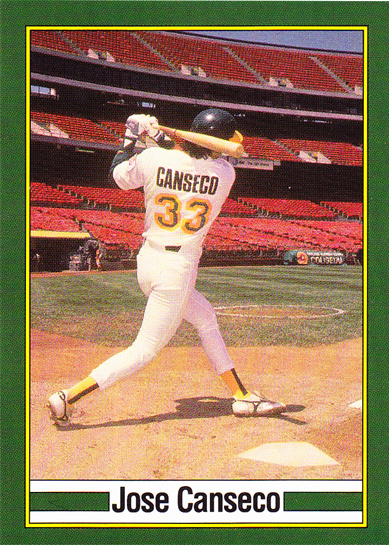 If you look closely and compare it to the version of the one on the box, you can see a slight difference, so while it isn’t the exact same picture, it was probably taken by the same photographer seconds apart.

I figured I’d add in the logos and change up the border to give it some more late 80’s pizzazz while matching the product it was supposed to have come from. 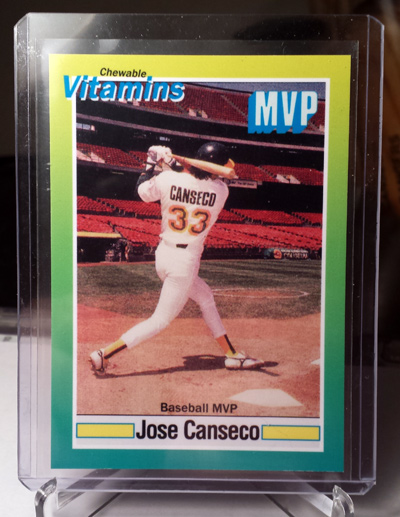 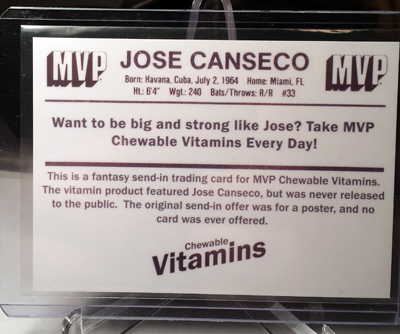 I wonder if ever an ’89 Griffey (making it his rookie) ever came out, what it would go for if it were truly rare.  I did a quick mock of what the card would look like, but since I don’t collect Griffey, I didn’t actually make the card: 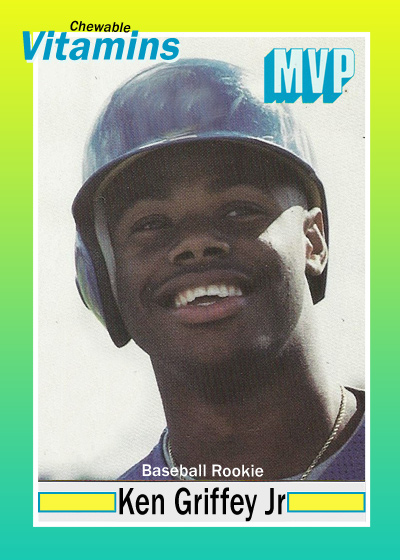 So, here is the set together …. 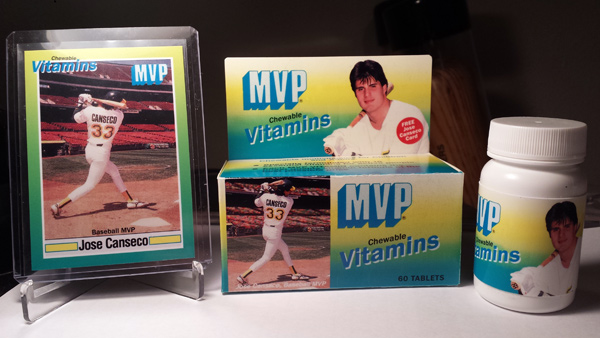 And here is the set together with the original artwork. 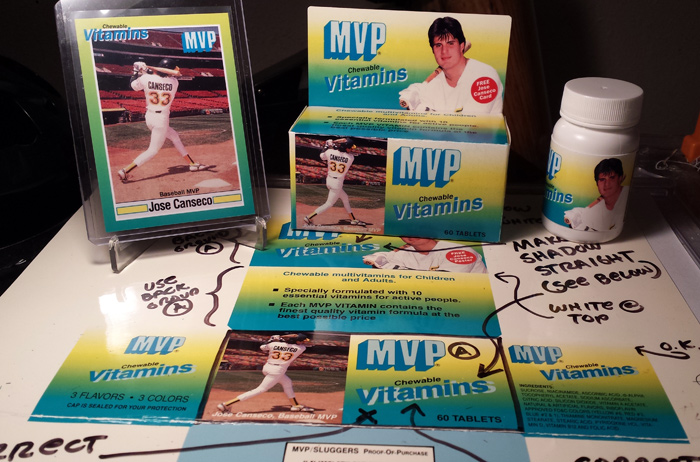 I love adding pieces to my collection that compel me to make more pieces for my collection.  I must say this is definitely the first time I’ve done anything quite like this, and it may quite possibly be my last!