The past several months of work have been particularly frustrating.  From server issues, to programmer problems, to hackers, and more.  I’m thankful I have baseball cards and writing as an outlet to relieve the stress.  My wife, on the other hand, had other ideas this week.

She decided that she wanted to go to the gun range.  With as much as I don’t want to admit it, I’ve never fired a gun before, so we opted to take an hour lesson to get a handle on shooting and gun safety before buying one.  Our instructor looked and sounded like a bad guy from a James Bond movie, which made things interesting.  The hour lesson ended up being closer to two.

He spent a lot of time with my wife, and was a little too “friendly” with her for my tastes.  I started thinking to myself “is he being too comfortable with her?”  Before I had a chance to consider telling him to back off a bit, it was my turn to shoot. 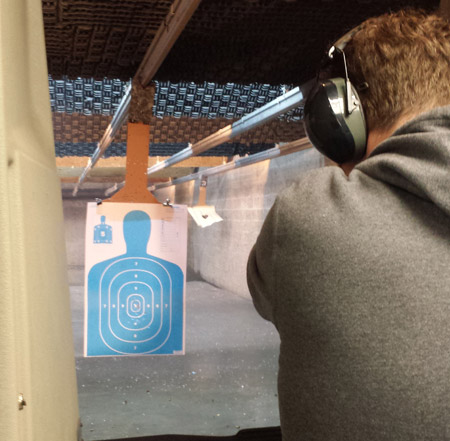 BULLS EYE, BABY!  Wait … what…. what is this strange sensation I am feeling behind me … 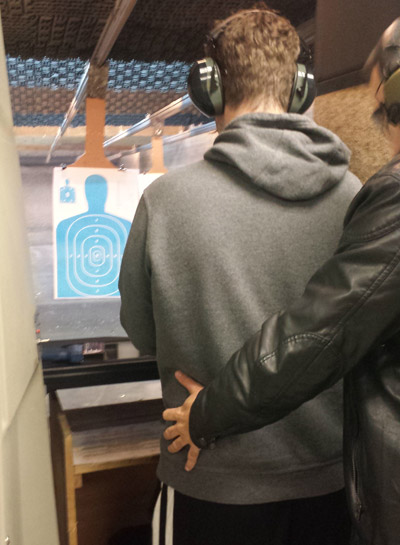 Wait … uhmmmm … excuse me Mr. Handy McHands … I shot *perfectly* … surely I don’t need any hands on help with this?  Ack!  What … what are you doing, dude? 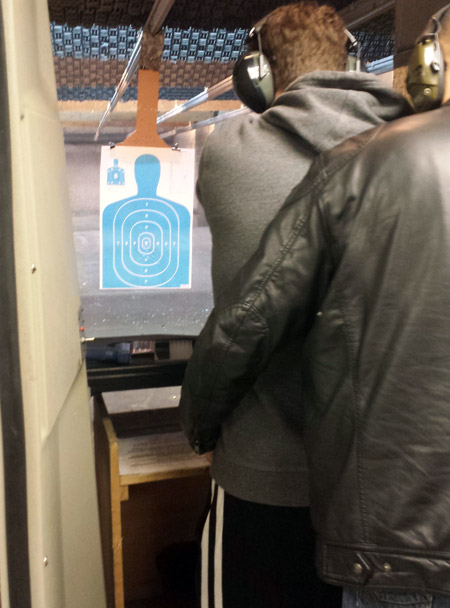 Needless to say, I don’t think we’ll be going over there anymore.  #YIKES.  I guess at least it got my mind off of work issues.

A friend of mine who is the batting practice pitcher for Canseco wanted me to do a card of him for his collection of Jose playing for Pittsburg.  I bet you didn’t know he played for Pittsburg, did you?  The Pittsburg Diamonds, that is!  Yes, I’m blessed to have a favorite player who has played on several minor league teams post MLB career, and no I didn’t spell Pittsburg wrong. 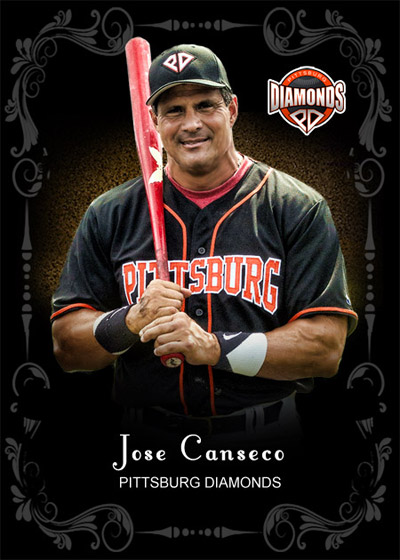 This has inspired me to do a custom Post MLB Minor League set of Canseco at some point – stay tuned!

Cool Papa Bell!  Here is what I came up with …. 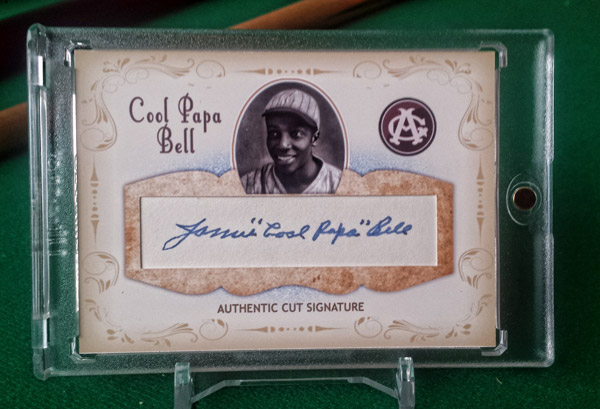 Staying in the same design, I decided to knock out a few customs for my own collection using some of the autographs in my pile of TTM/IP signatures I’ve acquired over the past year or so. 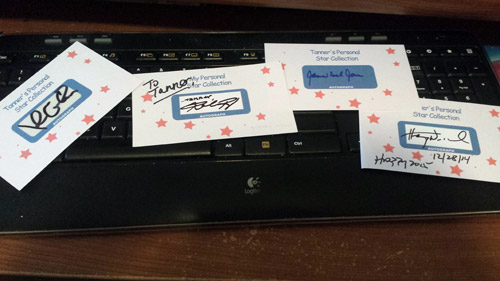 After doing the artwork for a Babe Ruth cut signature a while ago, the person I did it for ended up giving me this for free … 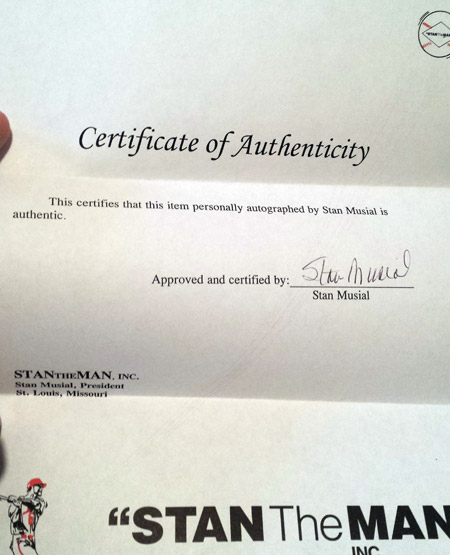 I figured why the heck not?  So, I whipped up a cut auto of Stan the Man Musial and Ronda “Rowdy” Rousey … she even personalized it to me: 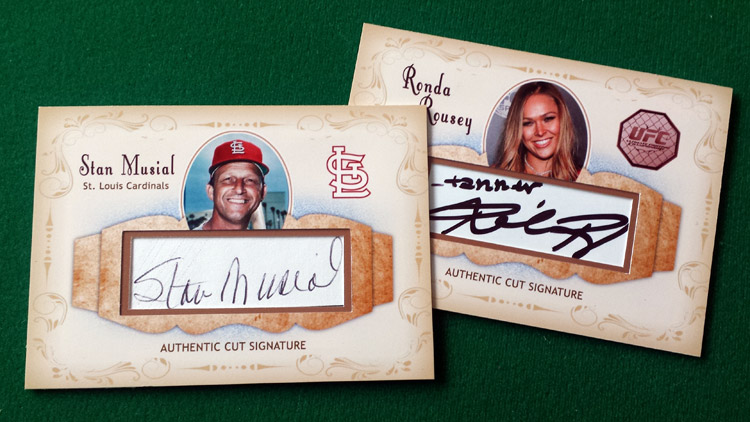 As you may know, I’m a big fan of obscure cards / variations from the 80’s & 90’s.  One thing that has piqued my interest in recent days are the 1998 Select cards.  I sure wish they never went bankrupt, because they came out with some gorgeous prototype cards.  Only a select few players were actually made, and they were set in a five-tier “Quasar” system.  One Star, Two Star, Three Star, Four star and Five Star (the bonus one).

These looked great to me, but Canseco didn’t make it in the set.  Oh yeah, and neither did Chuck Norris. 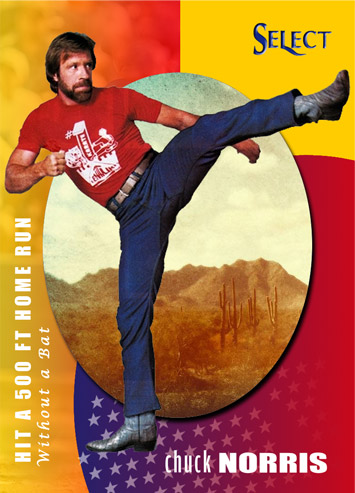 Did you know that Chuck Norris was in all six of the Star Wars episodes?  He played “The Force”.

There used to be a street named after Chuck Norris, but it was changed because nobody crosses Chuck Norris and lives.

Chuck Norris has a bear skin rug in his front room …its not dead it just doesn’t dare move.

Death once had a near-Chuck experience.

Ok, I’ll stop.  (We love us some Chuck Norris facts around here!)

I decided to do one of Jose as well … 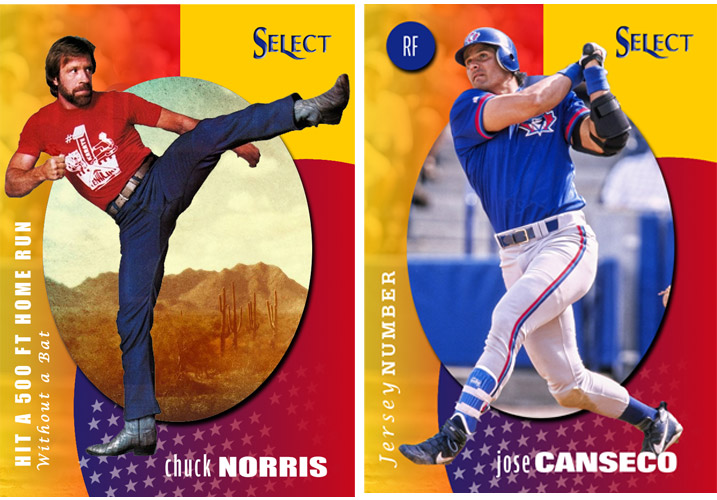 (Chuck Norris doesn’t turn the lights on, he turns the dark out.)

Instead of just doing one of the Quasar designs, I figured, what the heck?!  Let’s do ALL of them. 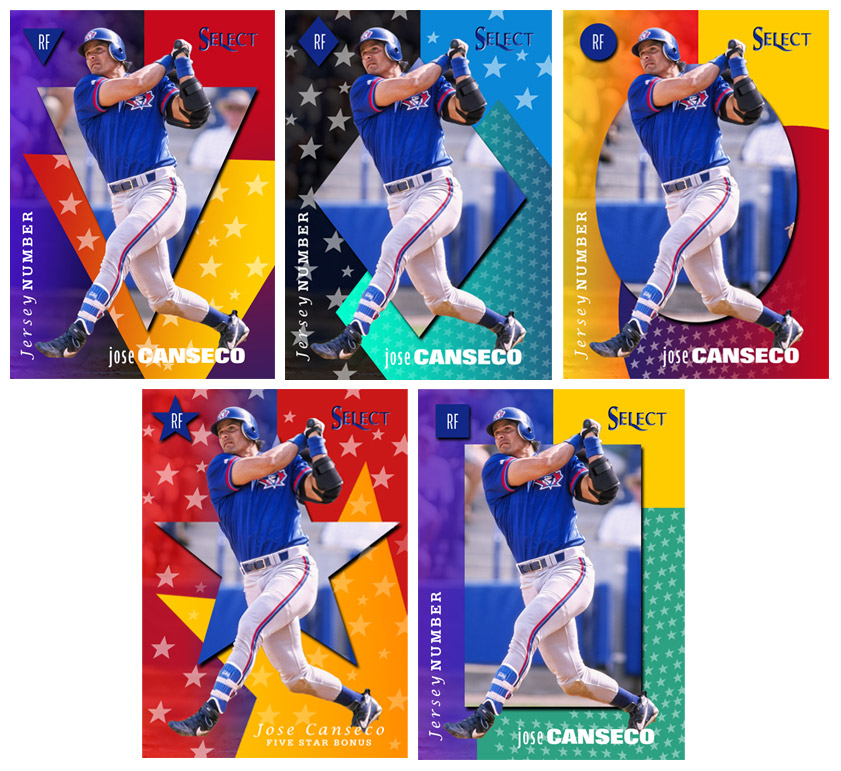 (When Chuck Norris enters into a courtroom, the judge stands up.)

I love how the art work looks, but let’s be honest – we are all card collectors here.  They aren’t really collectible until they are actual cards. 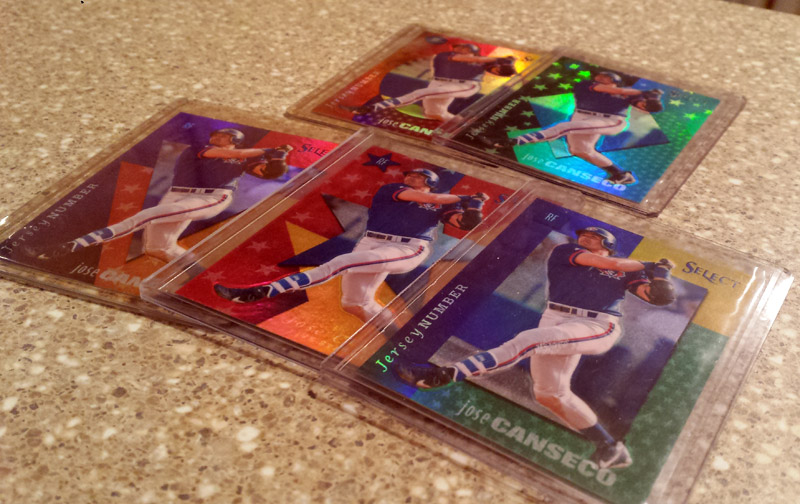 Here are the backs of them …

btw … did you know Chuck Norris once drowned a fish underwater?  Just checking. 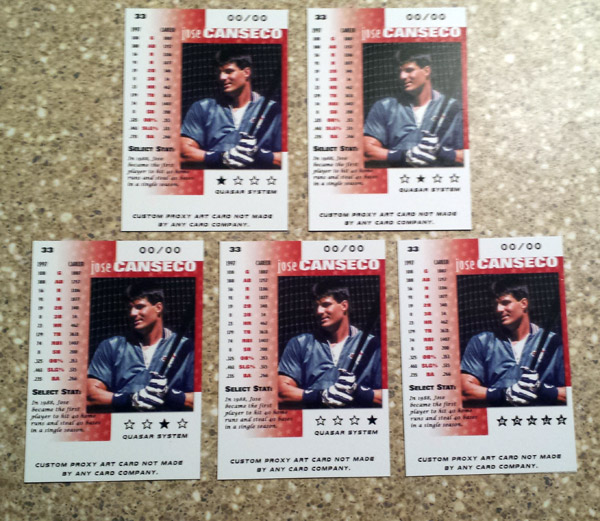 So, that’s all I got for this episode of mouschi weekly.  Thanks for reading!  Always remember:  Aliens DO exist.  They just choose not to visit earth because they know Chuck Norris lives here.