Is this the future of collecting?

In the late 1990’s, I was at a Blockbuster music store, looking for some CD’s.  As I looked around at all the listening stations, I thought to myself … “Just wait.  Soon, we will be able to make our own CD’s filled with only the songs we want.”

I never saw that prophecy fulfilled … until about 4 weeks ago.  My family and I walked into a christian book store, and believe it or not, there was a station to allow you to add the songs you wanted all onto one CD!  While they just might be about 10 years too late, thanks to the quantum leap we have taken in downloading music straight to our devices, it was cool to see something I thought of 20 years ago actually put into practice.

Let’s hope this next idea doesn’t take 20 years!  I remember at some point in the early 90’s a player by the name of Geronimo Berroa did something great in a playoff game.  The very next day, his 1988 Donruss rookie cards were being sought after for $5 a pop.

Remembering this got me to thinking.  Why not make a special short print set “on demand” for special moments during the baseball history?  Yeah, yeah I know – they make cards of epic world series moments in the next year’s release, but who really wants these, anyway at that point?  They are cool memories, but not something that people are hyper-passionate about anymore.  In this day and age, last year’s world series is a lifetime ago.  Collector’s wallets are open mere minutes after something special happens while frantically searching ebay for rookies of whomever did something amazing.

Let’s try an example, shall we?

Let’s use Jose.  No, not that Jose.  Jose Bautista.  He had an epic home run in the playoffs a few weeks ago that was a pretty big deal.  Don’t believe me?  Ask this guy who got a tattoo commemorating the event: 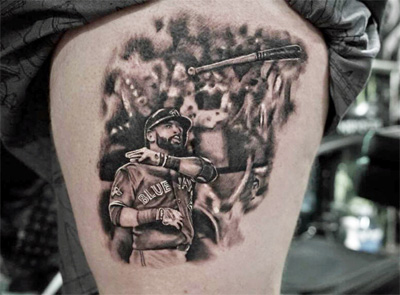 Anyhow, imagine if Topps decided to take this card: 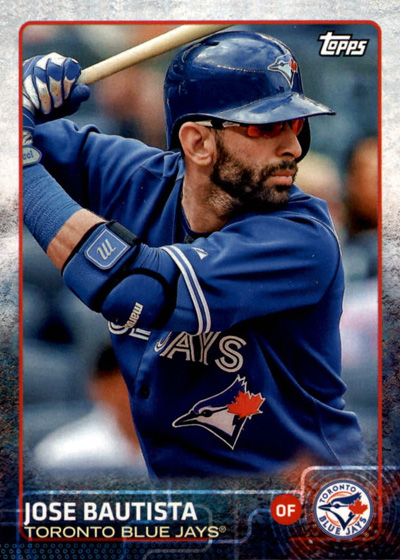 and modify it a bit in photoshop then stuck it on ebay or their website to pre-sell the very night it happened!? 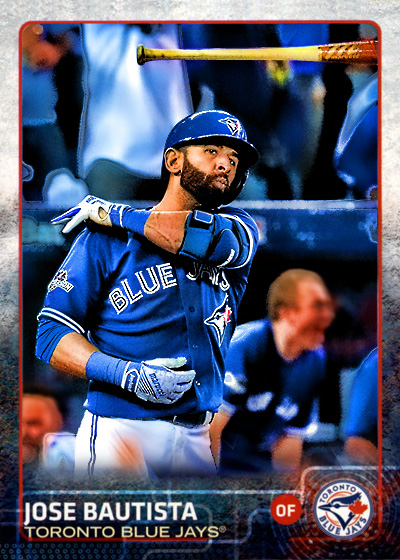 Can you imagine how many would sell for a lot of money?  It could always be “checklisted” after the post season, and they could have a set of 10 cards … each of which just waiting to be made once the event actually happened.

Let’s take it a step further, though.  What if the Topps made this card, punched a hole into it, went to their little cubby labeled “Joey Bats’ Bat Pieces” and put one in.  I mean c’mon, how epic would this be?  A bat card … of the bat flip that JUST happened? 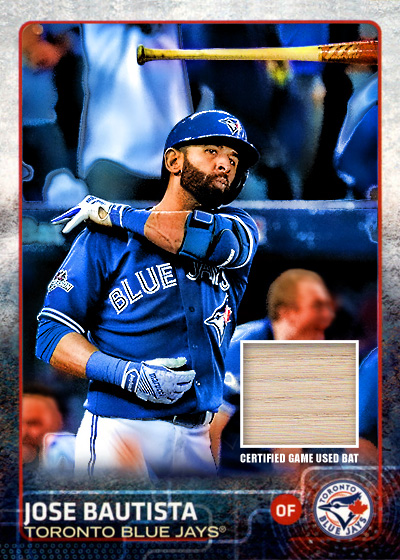 For those of you who don’t believe they are really game used, they could also just do a little fade action at the bottom and put one of those sticker autos to the test.  This is one application that I don’t think anyone would have any qualms over them using sticker autos. 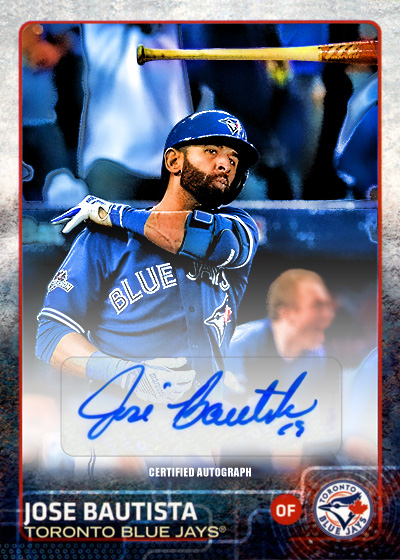