Up to my Eyeballs in Alligators

Work-wise, this past week has really eaten my lunch.  I’ve had all sorts of fires to put out, and am running on very little sleep since Wednesday morning.  For a while, it seemed like one solved issue ushered in 5 more emergency issues.  Not fun!

Fortunately, I have some very good programmers and they are tying things up for me.  It has been a long time since I’ve been neck deep in code, but this week I’ve been fully immersed in php and mysql.  Fortunately, I do see the light at the end of the tunnel!  I just hope it is not a train coming.

While I have been up to my eyeballs in alligators, I have been chomping at the bit to find my happy place – baseball cards!  I have made some pretty great additions to my PC.  12 are mentioned in this posting, which is unheard of – it is getting ridiculously difficult to add any type of quantity of stuff that I don’t already have anymore.

Over the past several months, there are a handful of overpriced Canseco cards that I needed for my collection. From time to time, I’ll message them and ask what the lowest is they will go, and it generally is still significantly higher than what I feel like they should be at.

Every time these dang cards go through the monthly rotation of being a “new listing” on ebay, I always think “OH! There is another one!” Then I looked at the price … “oh. same card :/”

A while ago I received something in the mail saying that for the next 2 days, I will have the spending power of ebay 5x bucks! I didn’t think much of it until I started doing some math. Ultimately, it ended up being a 10% discount, which, while the cards I were interested in would still be too high, I wondered if I could make one last push on them by asking the sellers if they would mind bending a little more since I have the ebay 5x bucks.

To my surprise, I was able to land ALL of them. Well, almost all of them. I am still working on the last one … the one that I care about most. I’m not sure if it will materialize or not, but here are the goods:

Though they were initially overpriced, I was able to get every single one of them for 30%-70% off of the listid price!

Vanguard Holo-Purple Serial #’ed to 10.  I thought this was a no-go, as the buyer was firm.  I asked him MONTHS ago to lower the price and he rejected me.  Thankfully, he was willing to deal when I had my 5x bucks and now I have a nice Vanguard rainbow! 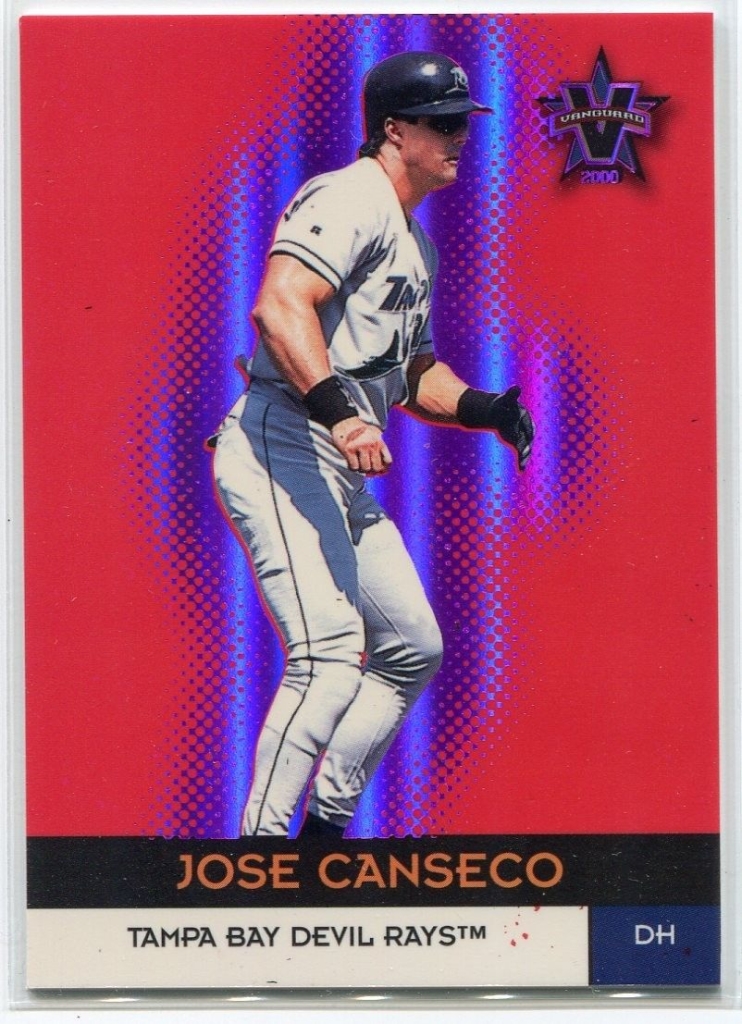 This one is still incoming.  This was a card I had initially huffed at a bit, because it was numbered to 25 …surely I’d find one later.  Well, that isn’t exactly how things go when you are looking at low serial numbered cards that are 15+ years old.  Looking forward to having this in hand instead of having to stare at it on ebay!  The thing that makes this card ridiculously tough is not just that it is hand numbered to 25.  Not that it is a quad bat card that is from 2000 … but that there are FOUR of the most sought after players in recent baseball history.  So that means that if you want one, you are going to have to battle the hard core Bonds, Thomas and Griffey collectors out there … not to mention the crazy Canseco collectors, too! 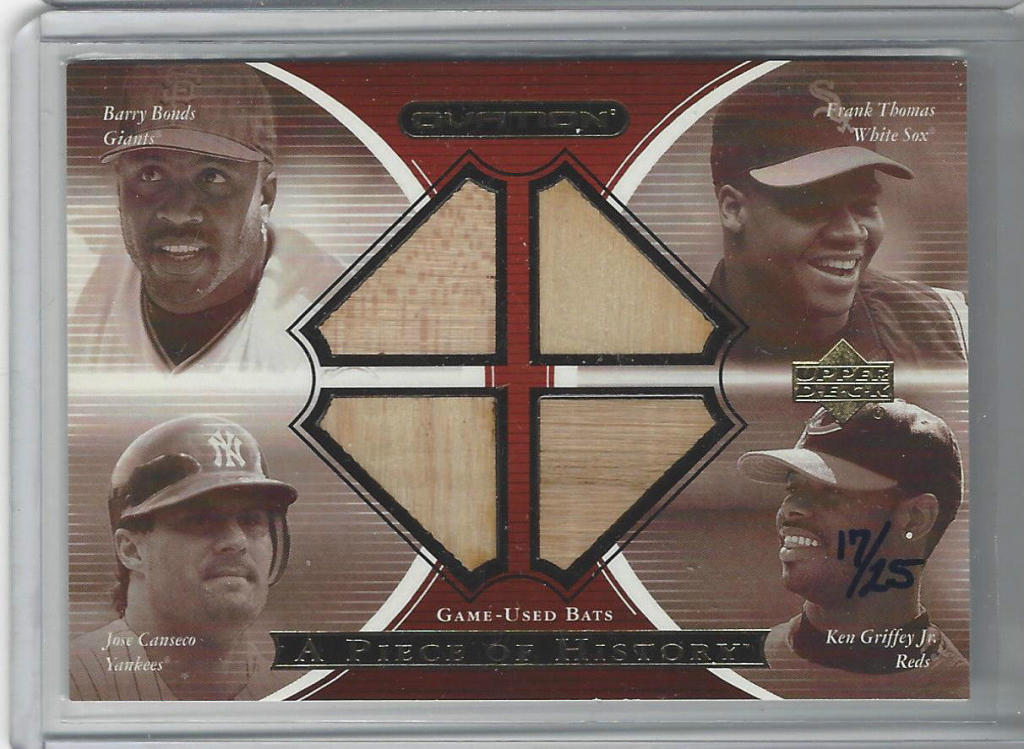 The next two cards are GORGEOUS in person – the are numbered to 54 and 67.  They are called E-X “Future” and E-X “Now”.  Once again, they were cards I had been looking at for a very long time on ebay.  These cards look similar in the picture, but one is silver and one is gold.  These are cards that once again, you scratch your head and say “Where are the other 50-60 copies?”  I don’t know, and as of now, I don’t care because I have mine! 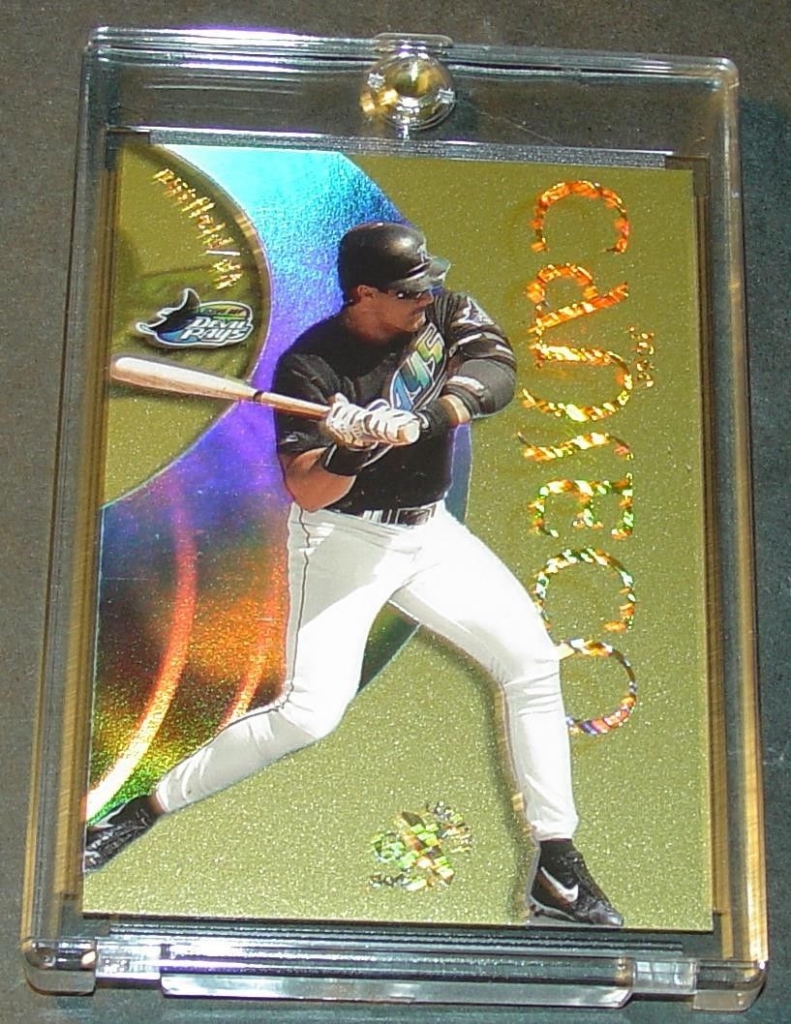 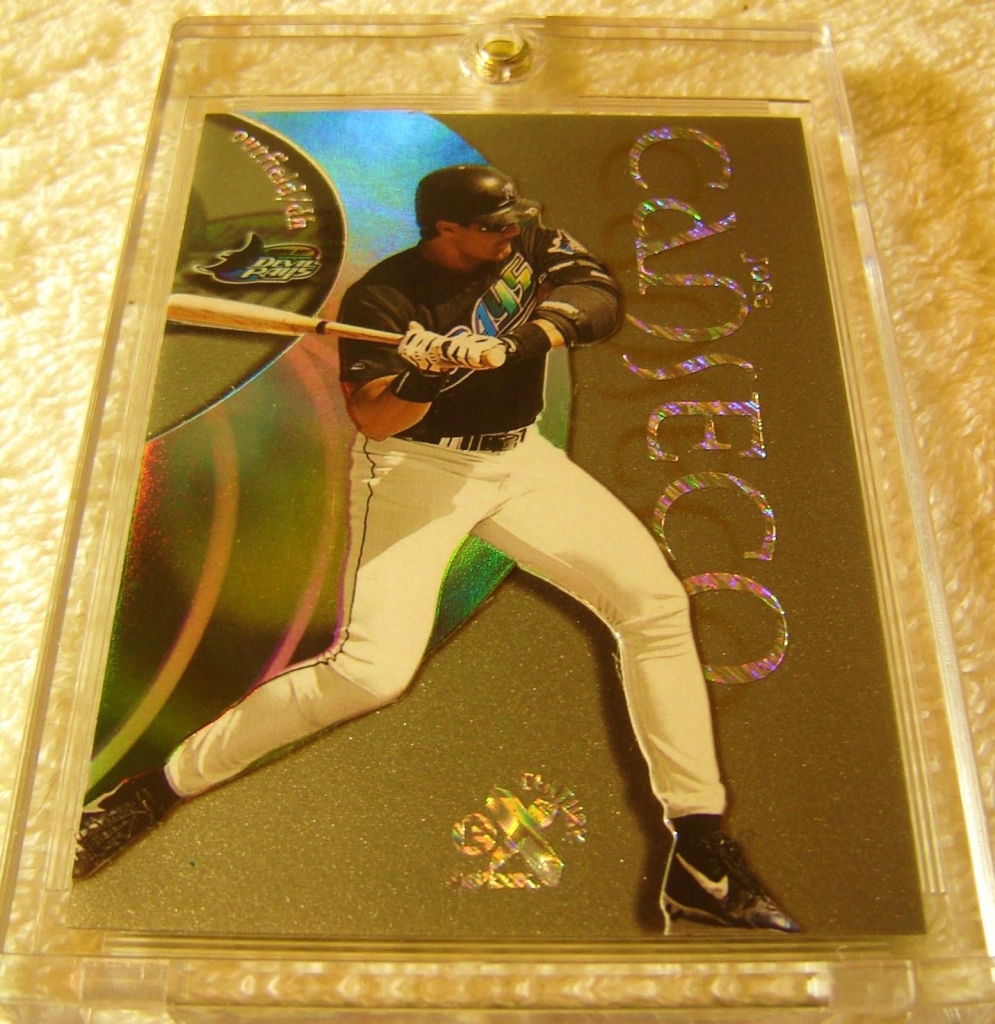 This is the 2000 Showcase Legacy numbered to 20.  It is almost like an inverted sepia refractor, where the surroundings of the card does not refract, but Canseco does.  A picture taken of this card cannot show the beauty of it – I have it on display on my desk, and depending upon where you position you sit, his whole body looks like it is glowing different colors.  It looks kind of “plain” in pictures, but definitely has that “oooOOOOooohhhh preeeettty” factor going for it in hand.  This card type should be up there with the crusades, but they are not very “picture friendly” unfortunately. 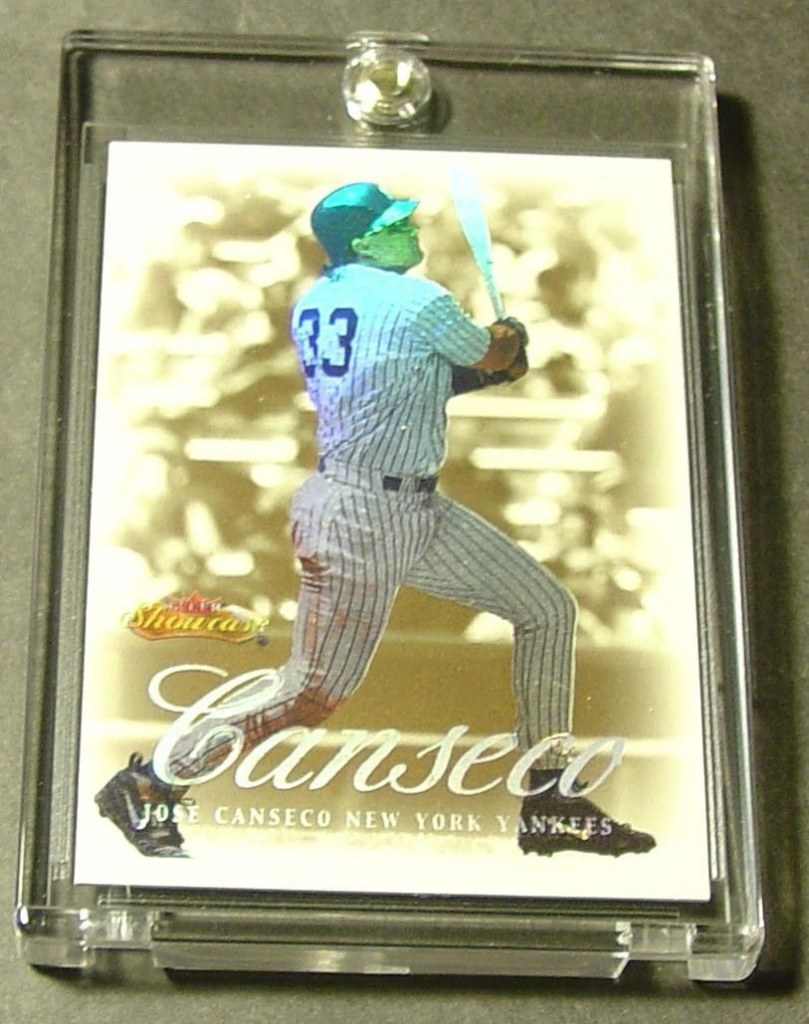 Speaking of Crusades … this one takes the cake for prettiest in the bunch.  In hand or in pictures, it is gorgeous.  It was overlooked by me because I’ve always wanted the red so badly.  I’ve gotta say though, this purple is DEFINITELY no slouch.  I have it displayed right now.  I have yet to introduce him to my green … but hopefully big brother red will be coming along soon. 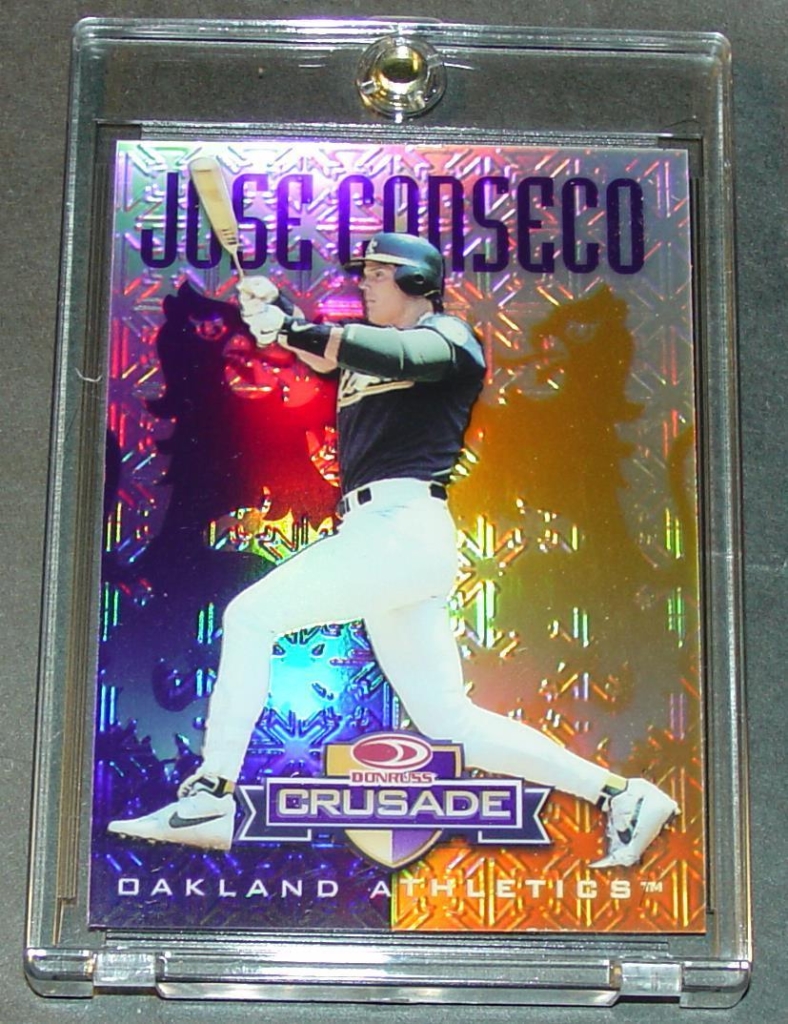 Here is the “new” one.  2014 – in my quest to put together a bunch of rainbows (minus the 1/1’s) I have a good run of 2014 Five Star Golden Graphs and Silver Signatures.  I found both copies #/5 at about the same time on ebay, which was pretty crazy.  They were both priced his, but the golden graphs guy was willing to go down significantly.  The silver sig?  Not so much.  When asked what his lowest price was, he responded with “You are looking at it.”  I circled back months later to ask to deal, and he said yes!  Here it is … 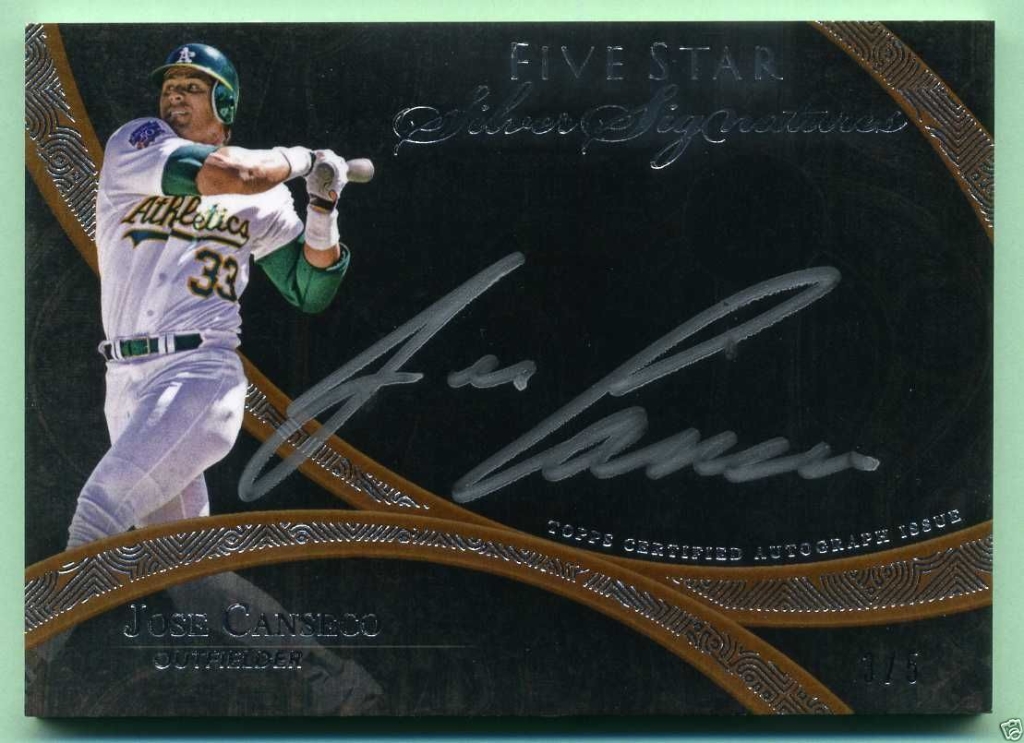 That does it for the “big” purchases.  In the meantime though, I’ve made a handful of other pickups… 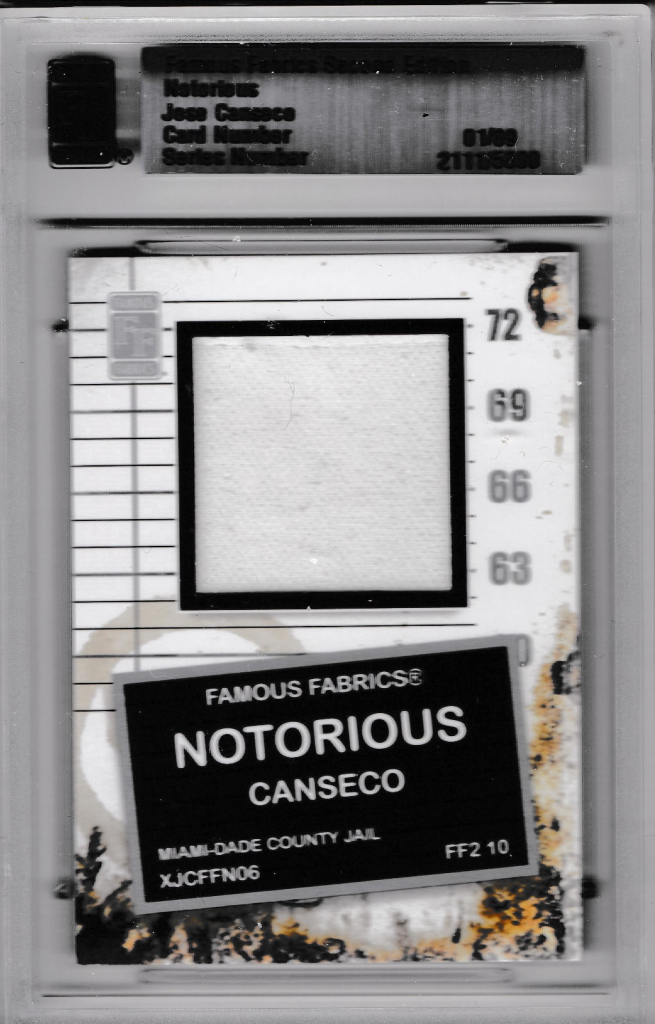 2000 Pacific gold portraits #/199 – this is one of the small handful of Pacific cards that I have had a VERY difficult time getting my hands on.  Heck, the card is #/199 … so what was the deal?  Supposedly there are 198 others out there, but I find that REALLY hard to believe. 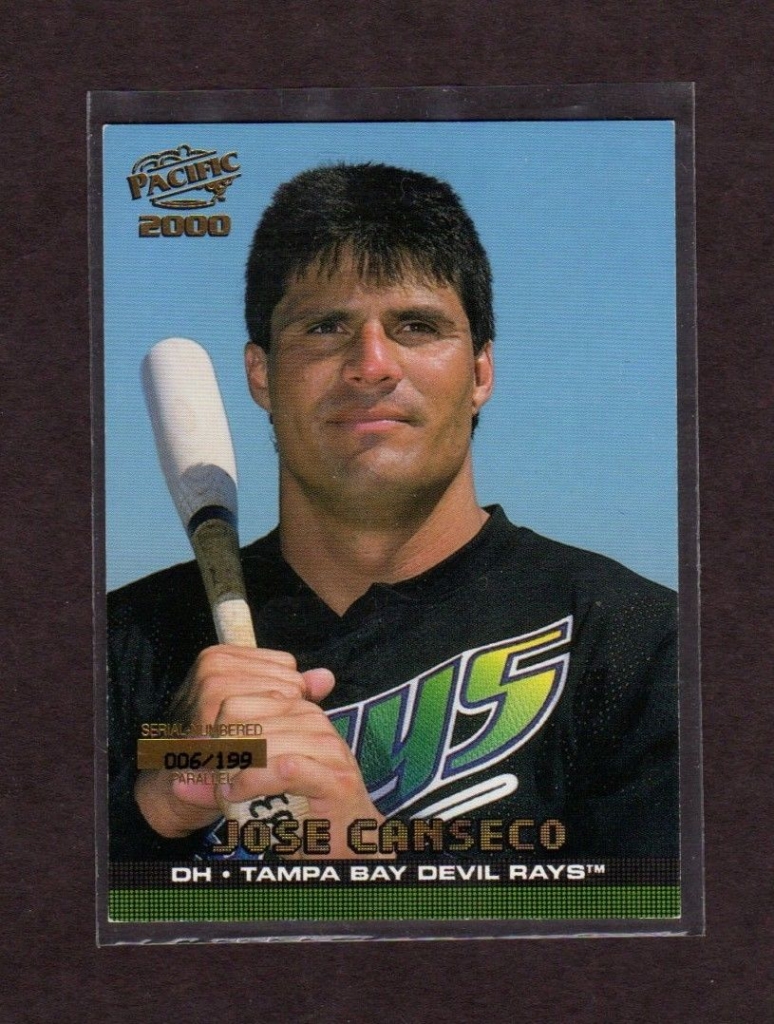 I didn’t even know this existed, but it is numbered to ./50.  I love finding cards I’ve never seen before.  This parallel is pretty slick. 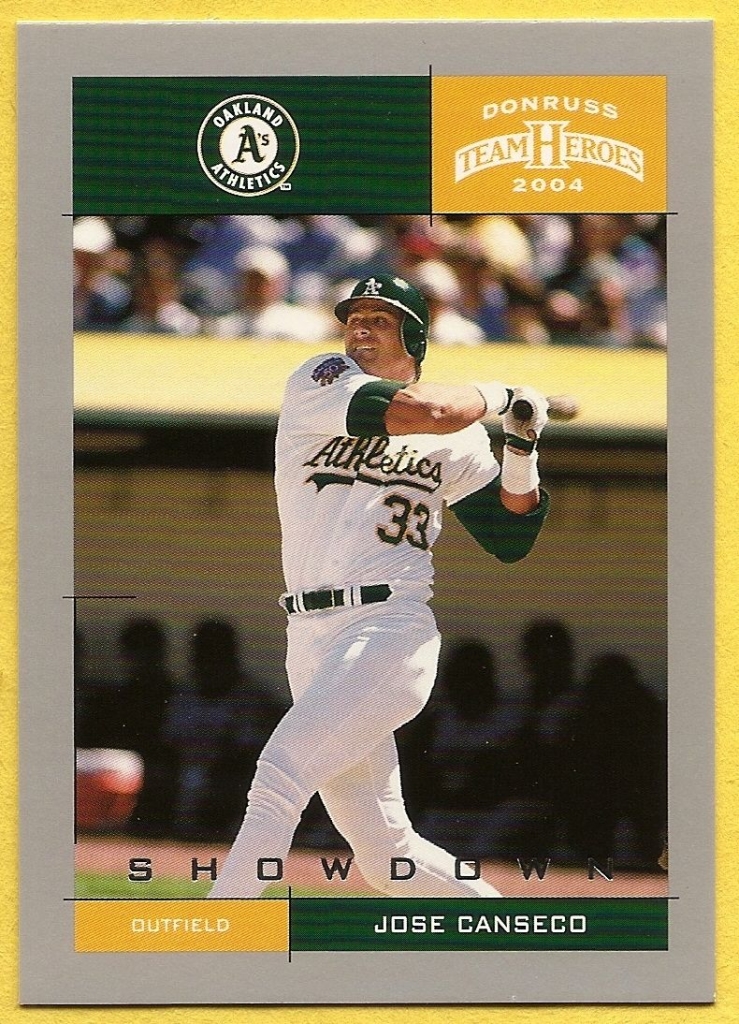 A cool little stamp that is foil!  It is like a japanese stamp or something.  I have the regular version already.  Again, I didn’t know this existed.  The seller had it up for $5, to which I offered $3.  Then I snapped out of it and bought it for $5. 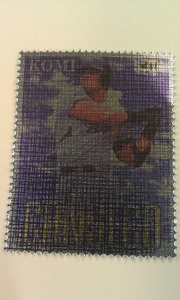 Last but not least, I’m going to end on a $3 card.  A card that has alluded me for a long time, and I didn’t even know what to look for up until recently.  On my checklist, I had “1995 Pacific prism vertical”.  I was wondering if I was looking for a horizontal card as well…I just didn’t know what to look for.  Then I found a picture where the card pattern background rectangles were running vertically and not horizontally like the one I had.  I thought this was pretty cool and was relieved to know what to look for.

I searched high and low, and simply couldn’t find it.  Collectors, dealers, ebay, comc, etc.  No one had it!   I went onto the beckett marketplace and emailed about 5 dealers.  One of them said he had it!  For $3 shipped, he sent it to me.  It came in today!  If you look at the back of both versions, one has 4 lines of text and the other has 3 lines of text. 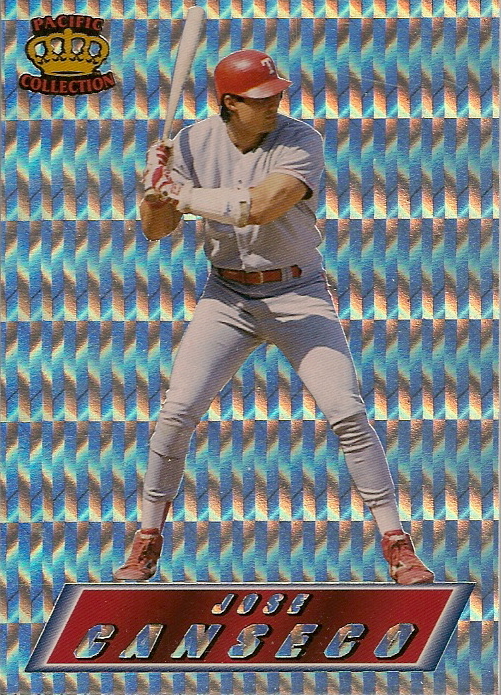 I have also picked up a few more, but I’ll save that for my next post!