My First Break, The National and Brian Gray

My wife and son have been gone on their mission trip since Thursday afternoon, and I am stuck here all by my lonesome – well, aside from our 2 dogs who are so depressed about their departure, that they don’t acknowledge that I’m still here.  (Seriously, dogs – the least you can do is come downstairs when I walk in the door!)

This morning, I opted to not let my inner uber-lazy-tv-watching bachelor win and actually got out to do something.  One thing I have been wanting to do is to actually physically see my Beckett on the news stands for myself in person.  I asked for some people around the nation to send over some pics, and I got some which I was very thankful for, but I figured – when is this going to happen again?  So I made the trek out to Barnes & Noble.

Before going out, I called to make sure.  I asked the lady if the Beckett with Joey Gallo on the cover was still on the stands.  After about 5 minutes, she came back and said it was, then offered to hold one for me up front.  I told her no and asked her to please leave it on the stands.  She seemed confused as to why I would request this, so I told her I’m on the front of it.  She started giggling and said “Oh, so you are THE Joey Gallo!”  I reluctantly said no, and that I was the really tiny dude at the top.

Yeah, I’m dorky enough to take a selfie of myselfie with my magazine in the store.  (Are you sick of seeing my face yet?  I’ll spare you the horror – close your eyes and scroll like … a half a second down!) 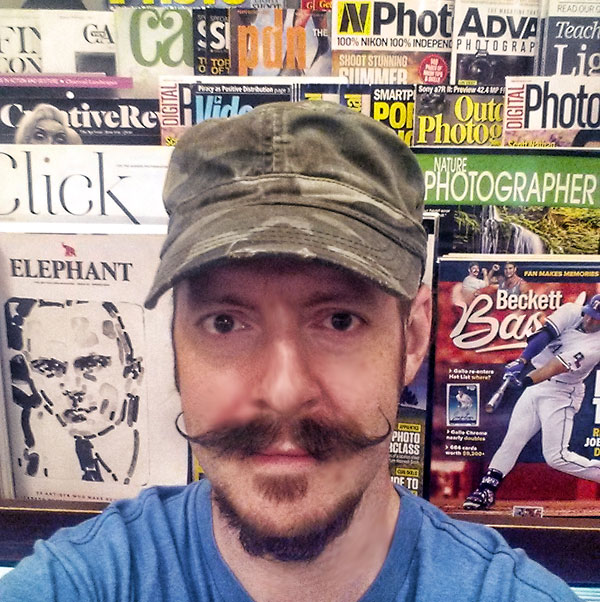 Okay, you can now open them again.

How nerdy I must have looked – a 35 year old man taking a picture of himself in a bookstore for no apparent reason.

Anyway, I wasn’t just going there to see it in person and take a quick awkward pic of myself.  The main reason was to pick up a few copies of the Beckett and some frames to display them on the wall in my office.  I wanted to also frame the “custom” Beckett cover I made to put on the wall as well. 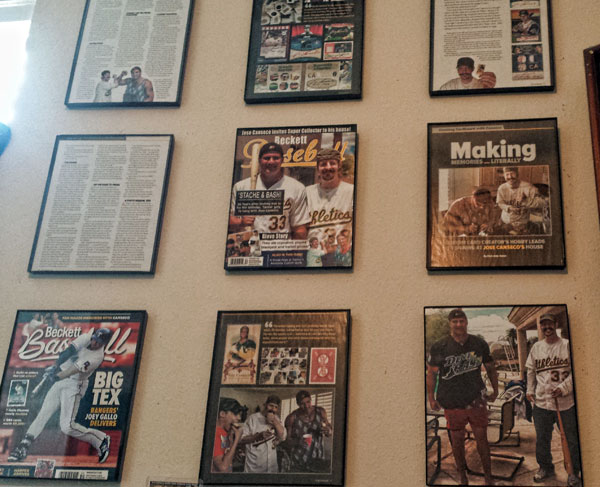 Sorry for the crummy pic – the window right next to it was causing a horrific glare.  The bottom right pic is one of our favorites.  Jose was trying on a Devil Rays jersey while wearing some shorter shorts – we all got a great kick out of that, so I figured it was wall-worthy.  Plus, I needed something to fill in position #9.

After this, I figured I’d make the long trip to the only baseball card shop I know for sure is still around.  I checked google, and it said they were open at 11 on saturdays.  After a half hour of driving, I was greeted with a sign that said “We will not be open until 12 today due to baseball games.”

DANG IT!  I wasn’t about to wait for an hour just to pick up some boxes (that is what I was going there for primarily anyway).  Besides, my first ever online break was coming up at 12:30 and I was starving.   At the end of every year, I buy copious amounts of wax to re-sell and trade away.   A few years ago, I did something called “I Break You Buy” – if someone wanted to buy a box from me and wanted me to break it for them online, I would then allow them to pick the top 5 cards and ship to them, to save money on postage.  I did several, and it was fun – but I had never been on the receiving end of something like this.

For $19.99 + shipping, I was the winner for the spot of a 2015 Leaf Legends of Sport Case Break for Jose Canseco.  (Imagine that!)  I got home and it took a while for them to get started.  I wasn’t sure why, but I was more excited about trying this thing out than I care to admit.  One of the really cool things about it that I didn’t know, was it was being opened at the National.  Though I wasn’t able to attend, I really did want to.

The whole scavenger hunt that Beckett had setup was really intriguing to me. First, the fact that I was going to be on one of the National Exclusive cards, but there was also a chance at a National Exclusive 1988 July Beckett Card of Canseco – autographed!  The way it worked was like this:  If you were one of the first 200 people who went to each of the 15 booths to pickup a National Exclusive Beckett card (and buy something from each booth), then presented it to the Beckett booth, then you would be awarded a “blind wrapped” signed Beckett card.

I was very fortunate to grab the signed Canseco off Ebay yesterday.  It is numbered to 30 copies, and is a thing of beauty – it is even encapsulated!  I can’t tell you how happy I am to get this! 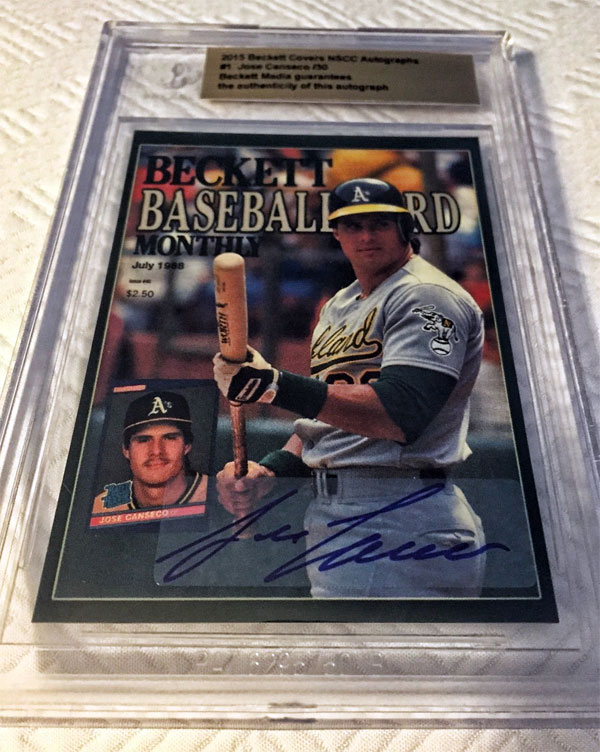 Right before lights out, I did a deal for the unsigned version of it as well.  I didn’t even know these existed, and they apparently are rare.  Either way, I’m very glad!

Perhaps the coolest thing though is when Chris from the forums (Chris, I forgot your screen name – please stand up so you can get a round of applause!)  reached out to me.  He said that he got me not one, but TWO of my national exclusive cards for me!  Razor, my fellow Canseconite said that I should figure out how to get the visual checklist since I was on there as well.  He pointed me to an ebay listing to where someone was trying to get $100 for the checklist alone.  Jeesh!  I asked Chris if he by any chance would be able to get his hands on one, and he said he figured I would want one, so he got me one!  Chris, again … THANK YOU!  I really do appreciate it! 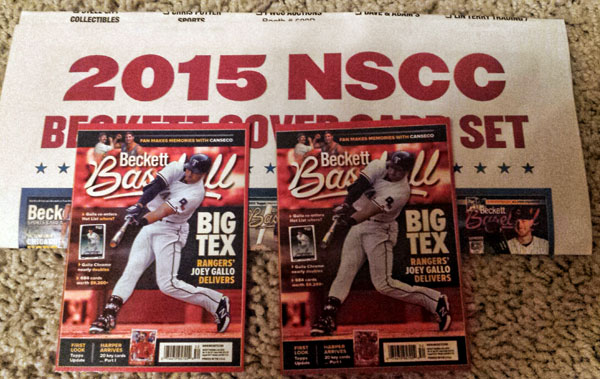 OKAY – back to the case break!

With the case just sitting there in front of the camera, I noticed the label showed that there were 200 ten box cases produced.  I read earlier that each box only had 1 pack and each pack had 7 cards.  This I quickly did the math.  I guessed that with the 3 flavors of Canseco that come in it, each having cards #’ed to 50, 25, 10, 5 and 1 as well as (completely guessing) 100 each of the ‘base’ versions of these 3 flavors, I figured that perhaps there were about 500 Cansecos out there.  It looked like my odds were good at pulling at least a base, which would have made me happy (I admit I did my math wrong on the fly and thought I only had a 1 in 4 chance at one!) 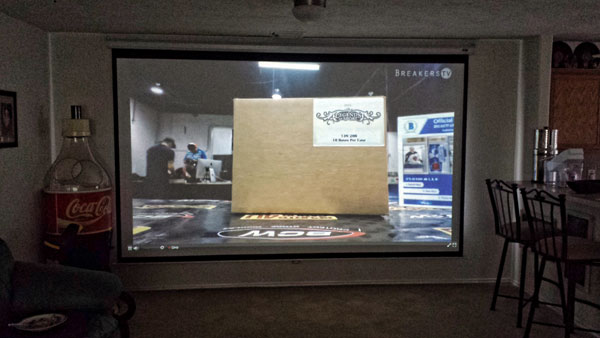 After a while, they mentioned they were going to have a special guest.  The guest, it turns out to be, is no other than Brian Gray, CEO of Leaf!  I see BG to baseball cards as I see Dana White to MMA.  Sure, there are other brands, but Brian is the only one I know of that gets in the forums and blogs online to interact with others.  For all I know, the CEO’s of Topps & Panini may do this too, in which case may completely nullify my previous comparison, but to my knowledge that is not the case.  While the break was about to start, I said something about how Brian should have his autographed card inserted in the boxes.

The boxes kept being busted open, and still no signs of Jose.  Finally, in the 2nd half of the case, I finally hit one!  A base auto.  Again, I’m fine with this as that is what I was hoping for – at least one. 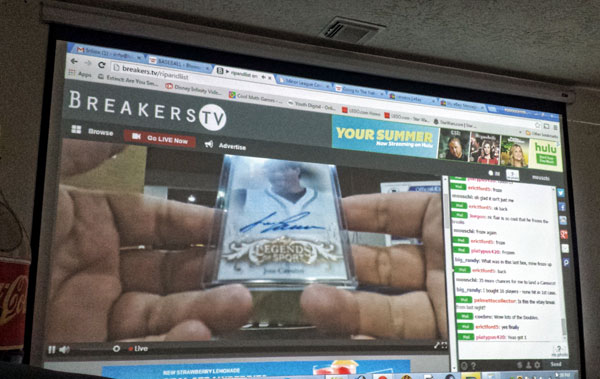 At the end Brian asked what “mouschi’s” real name was on video, so I typed it in the chat box and the other guy on the video confirmed my name as well.  Brian pulled out a blank card of himself and said “Well, Tanner – I’m way ahead of you on the card thing.  Here you go.”  He personalized the card to me and it should be coming along with the Canseco! 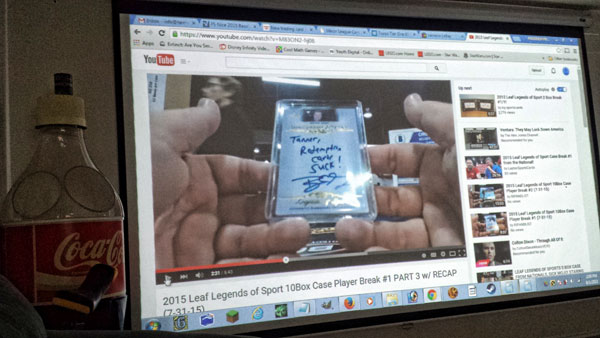 Even though I got a Canseco autograph, I’d have to say the most fun part of the break was getting BG’s auto personalized to me.  I didn’t really ever understand why so many people wanted my autograph, since I’m a nobody (Read: not a baseball player), but after getting his autograph, I can now see how it could be fun to collect autographs of people other than sports stars.

As I was about to close out the window that had the online break, I
saw a dealer walk by the camera who I talk to each time that the Tri
Star show is here.  I don’t even know his name, but I thought it was
pretty funny.  It kind of reminds me of one of those grainy big-foot pictures. 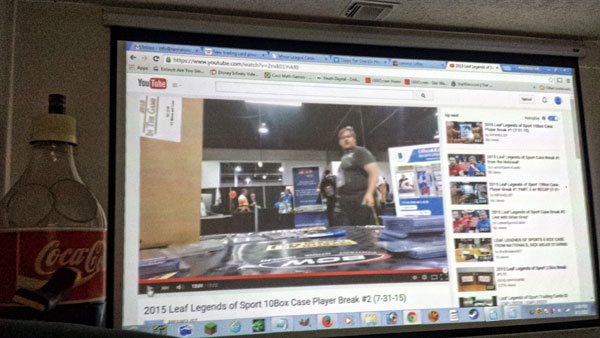 For fun, I wanted to see if Brian had any autos on ebay.  Interestingly enough, one did sell for over $20 recently.  Brian, if you are reading this, a word of advice – grow a moustache and put a hair in the card.  It will go for crazy money!  Just make sure you use the Alpha Whisker.  Keep up the good work with your cards, and don’t forget to keep adding Canseco in to your releases!