My Collection Just got Personal

As you read this, there are probably millions of online transactions happening around the globe.  Currently, I have cards incoming from Vermont, North Dakota, Florida, Mississippi, Indiana and New Jersey.  These cards are from people I have known for a while, people I have just met or simply people selling cards from Ebay.  They all have one thing in common though:  None of it would have been possible without the use of the Internet.

While online transactions are now as commonplace as air-conditioned houses, it hasn’t always been like this.  When I first started collecting in the late 80’s, the access of cards I had to was limited to The Bullpen – my favorite card shop.  I could always look forward to going there each week. It was about a 10 minute drive from home, so it was just out of reach by bike, but close enough that my parents would consistently indulge my addiction. Saturday was the best day of the week for me, for this very reason.

If I was really lucky, my parents may have taken me to other shops to see what they had, or better yet – the card show at Fashion Fair mall.  The bottom line though, was this:  If you were looking for something extremely difficult to find, you would probably have to wait years for it to pop up.  A 1991 Donruss Elite Canseco number to 10,000?  Forgettaboutit. 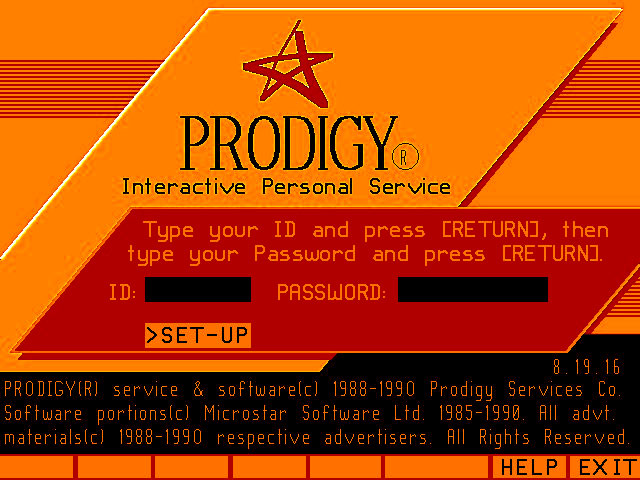 Prodigy was similar to AOL, but this was way before mainstream internet – heck, I don’t even know if most households even had a computer.  Then again, I wouldn’t have known because computers back then didn’t interest kids back then.

Devoid of fancy graphics or multiple colors, Prodigy was a gateway to the world for me as a collector.  Since we were not allowed to buy or sell cards there, we would be clever by saying for instance, that 1989 Topps Gary Sheffield card was for trade for 3 GWRC’s.  That meant George Washington Rookie Cards, or $3.  Yeah, we were all so smooth and cool about it.  After ever post I made, I signed off in big capital letters as “THE COLLECTOR”.

After a while, I had a whole slew of packages going out in the morning and coming in in the evening.  Well, that is, until Prodigy said we would only be allowed 30 emails a month for free, and each additional would be 25 cents.  I knew this was an impending doom for my new fantasy land, and I was right – we cancelled shortly thereafter.

Fast forward into my adult life when my collecting spark (like many of you) was re-kindled.  This time though, there was Ebay.  What a magnificent place!  It was like Prodigy on steroids.  With color.  And pictures.  Plus, you didn’t have to say you were only interested in trading for GWRC’s!  Filled with oddball and rare items, I was in heaven.  Perhaps the most overwhelming thing was discovering how many things there were out there that I had never even heard of!  (Really?!?!  They make baseball cards with a piece of the player’s jersey in it?!  How cool is that??)

Ebay is certainly not the end-all, as I’ve said before.  There are TONS of cards out there numbered to 50 or less that I simply have never seen on Ebay.  Thankfully, this is where other areas of the internet have really helped.  Through friendships I’ve made via forums, my blog and elsewhere, I have managed to pick up some pretty cool stuff that never would have even hit Ebay.  Yeah, I could post up what super rare cool cards I’ve gotten on Ebay, but this post is really for the more unusual items.

I had created a thread online asking people to show what their most unusual items are in their collection, and it was a ton of fun to see what others have found.  So, with that said, here are mine!

Most (not all) of the following was through a connection I made on my blog with a neighbor of someone who was very close to Canseco & his family.  It was basically a bulk pickup, so while I appreciate all of the items, I’ll have to say there are some more than others that I enjoy.

This stuff just doesn’t come online ever, so I was thrilled to get these things.

First up, actually is an ebay item, but I just had to show it:

You have seen the candy bars, I’m sure … 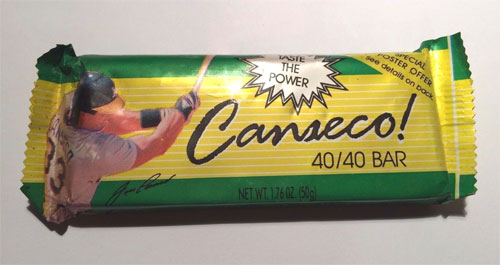 But what about an entire unopened box?  When I bought it, the first thing I thought was “why did I buy this?”  But it is compact enough to not take up too much space, plus it is so unusual to find an entire box of them … with 36 bars, how can you not get it? 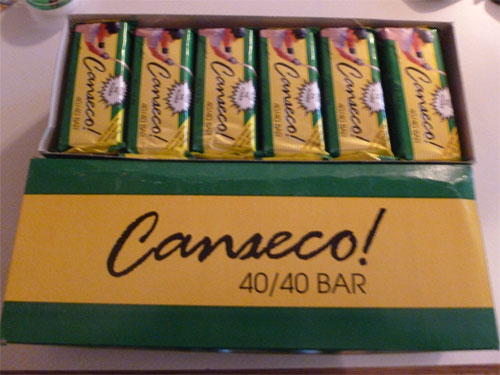 Now, onto the other odd items …

A few comp tickets that were his which were never given out (the ticket on the left is to a celebrity softball game of his I believe.)  The other tickets are cool because 1 was game #33 and the other, I believe, he hit a homer if I recall correctly.  The thing that makes them neat is they were actually *his*, not just because they are tickets.
: 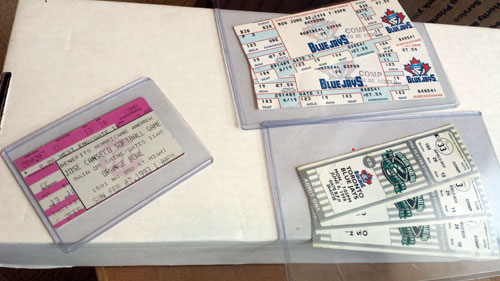 I’m a sucker for anything that can fit in a top loader, so these old business cards of businesses he was a part of are things I really enjoy.  Apparently the sports management business caused a lot of controversy back in the day, because it wasn’t run by the player’s union.  You may want to fact check that, but that is what I recall 🙂 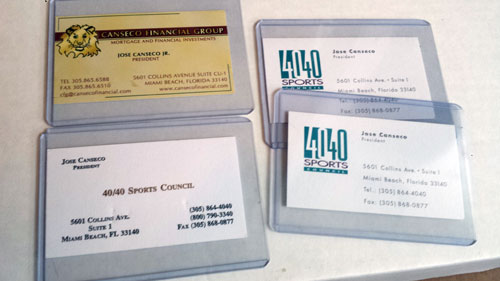 This bear was his daughter’s bear.  He is wearing a Canseco jersey.  I put in a candy wrapper in a holder on his lap to show another cool collectible.  It says “HERESHEIS” instead of “HERSHEYS” and on the back it talked about the mom and dad being Jose & Jessica Canseco. 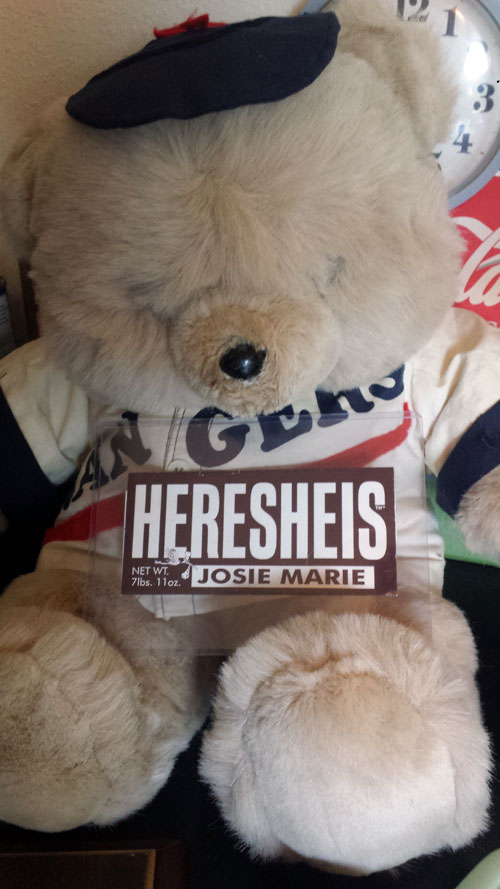 This is a statue made by some artists with some fairly decent notoriety.  One of their pieces of Shaq is up on ebay right now for $150.  This particular piece is special because it is of Jose, his first wife Esther and their dogs.  The greatest thing about this is that it wasn’t just a statue; it was a statue given to them as a wedding gift. 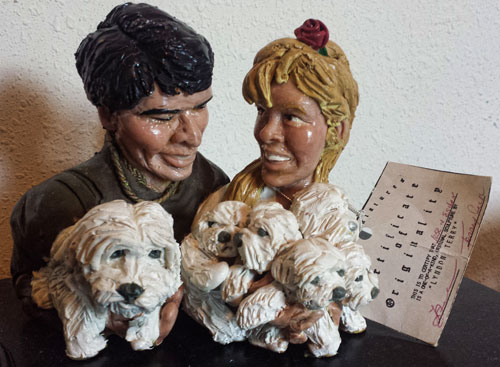 Unfortunately, it didn’t look like all the dogs made it.  In the small array of greetings cards I have (one of them being a Merry Christmas card from the Rangers to Jose and another being signed from Jose and to someone else) is a condolences card saying they are sorry for the loss of their dog. 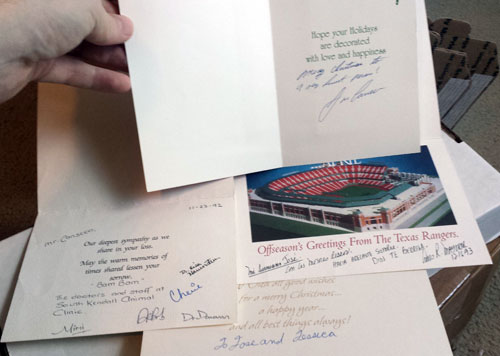 Here is a pic of he and Esther … both of which autographed it. 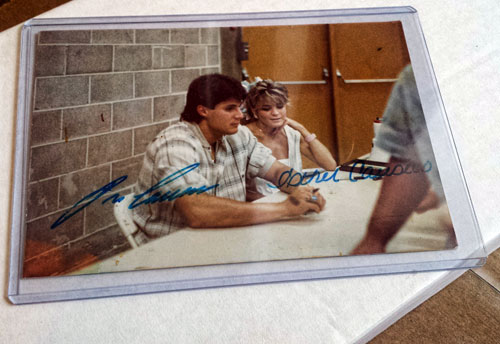 A pay stub showing a cool 5+ million dollars:  (complete with housekeeper’s grocery list on the back!) 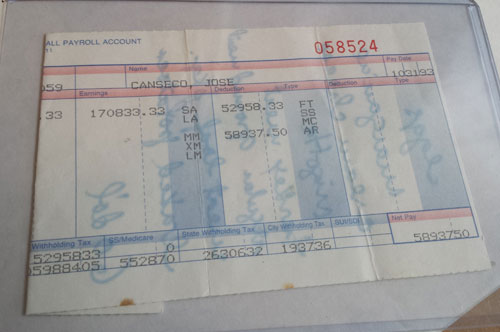 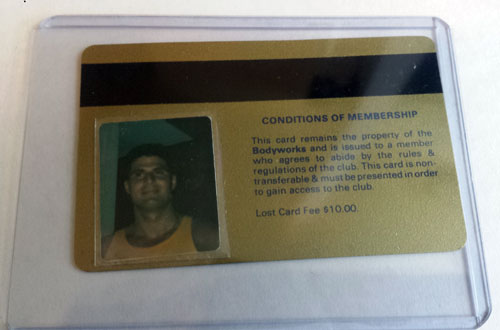 (Which by the way, I traded for the following … LOVE IT! It is my 2nd favorite oversized piece I have!  signed, jersey piece and hand #’ed to 5.) 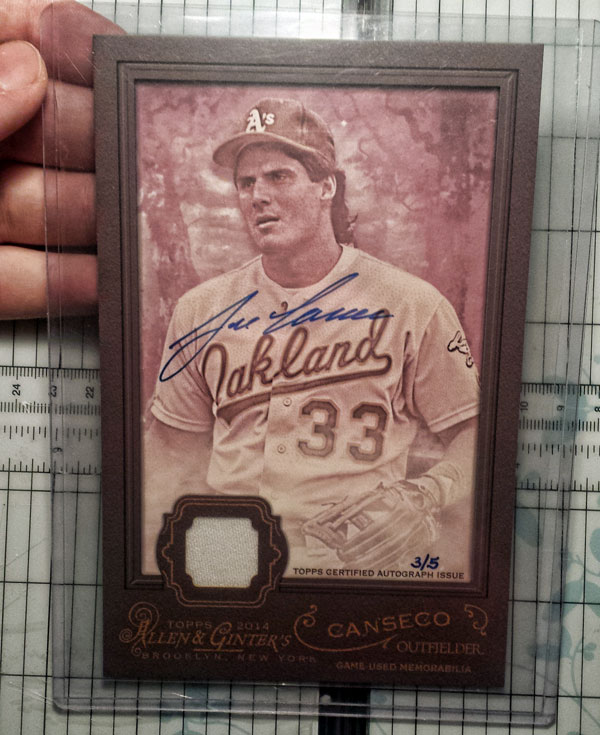 Remember the 1986 Japanese Super FujiFilm Series?  Neither do I, but apparently a bunch of the 80’s baseball studs went overseas to Japan to play Japan’s finest.  Jose was one of them, along with Ripken, Gwynn, Sandberg, Ozzie Smith and others.  I got a huge album of original photographs from it.  Most of the pictures were of poofy haired 80’s people at the before/after banquets, etc. but Canseco did have a few good shots in there.  Can you say ORIGINAL Japanese 1986 Rookie Photographs?  Yeah, baby!  I’ll probably be selling the entire album, sans any pics that have Canseco in it, which should be a massive hit for player collectors. 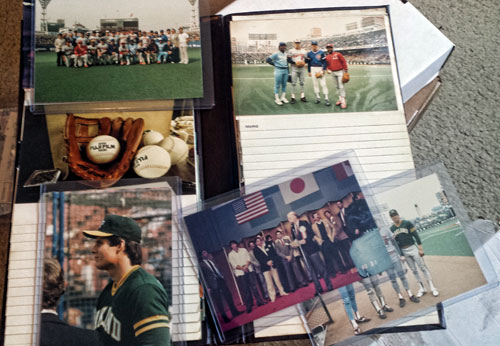 One of my favorite things from the entire haul is this:  A package that shows an address label from Fox 20th Century / The Simpsons to Jose Canseco.  Inside the envelope were several professional 8×10 photos of Jose doing the voice overs for Home at the Bat.  Does it get any better? 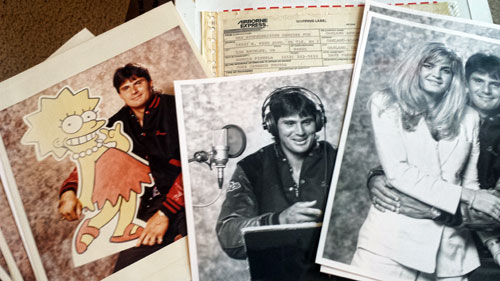 In my opinion, the following gives the Simpsons pics a run for their money.  Shown below are several of Jose’s items.  A guest pass for him for the A’s in 1997 as well as his parking pass, a spring training pass for him when he tried out for the Angels and his Devil Rays player identification card. 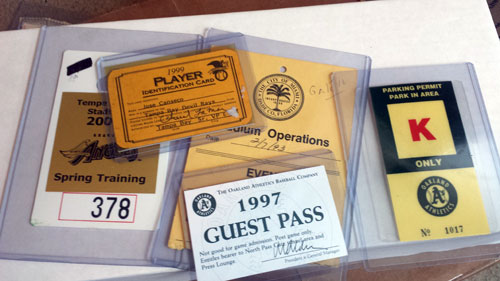 With few exceptions, I’ve chosen to keep my collection largely baseball card based up until now.  I don’t have any intention of being the guy who’s office is covered from floor to ceiling with posters of the same dude, because I think that is tacky, (trust me though, my office is way too cluttered with Canseco collectibles as it is!) but as I’m getting deeper and deeper into my PC, I’m finding that maybe player collectors aren’t really all that obsessed with just a specific player to the point where the player should consider a restraining order.

Perhaps instead, they also enjoy a variety of (and excuse to collect) different pieces of collectibles, be it different inserts/parallels or teddy bears that their daughter used to play with.  I think this line of thinking probably makes more sense to me.  Frankly, I don’t really care much about any other player, so Canseco is the only guy for me to collect.  I’m very thankful and happy that he has so many different cards out there so I can experience being the owner of a Donruss Aqueous, or a 1/1 buyback auto, etc.

As for these oddball personal items, I can’t quite put my finger on what my favorite is in the bunch, so perhaps I’ll sit on it a bit while snacking on a Canseco 40/40 chocolate bar and let you know later.