I remember having an early interest with Allen & Ginter back several years ago.  I was still getting over the fact that boxes of cards were significantly higher than the $15 I was used to as a child.  I was very intrigued by the pack pulled autographs and relic cards.  So much in fact, that I was willing to drop $80 on a box of A&G.

I had been told that there would be not one … not two … but THREE “hits” (either game used cards or autographs) in the box.  Silly me … I thought they were talking about BASEBALL CARDS.  A few packs in, I hit my first relic card – it was a scrub.  No problem!  I still had several packs to go and 2 hits left!

a piece of slacks…

I didn’t see that one coming, but surely the final hit was going to be something mega awesome from a super star.  A red ink 1 of 10 incre….

It was a flannel relic from a duck hunter.

While I still would not be happy with those “hits”, I can see our baseball card collecting hobby has changed fairly drastically over the past several years – right under our noses.  Even for myself.  If I pulled a Will Ferrell autograph several years ago, I would have been confused.  And now?  Heh, due to the pricing, I may be more excited than if I had pulled an on card autograph of Mike Trout!

Last year, I caught the non-sports bug as well by meshing baseball designs with non baseball personalities, such as some Star Wars in a 2009 Topps Refractor style. 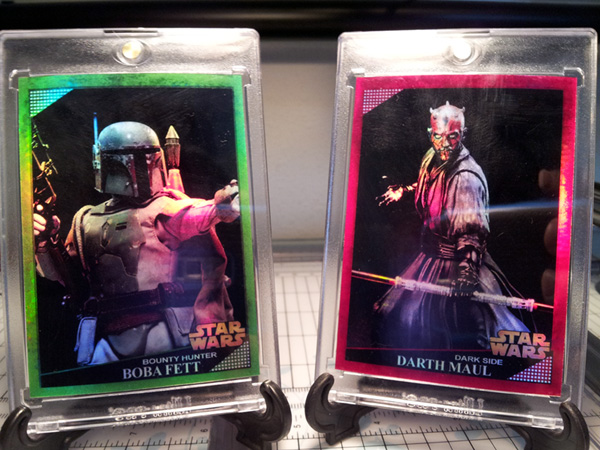 Even something simple but elegant like a cut auto of Jessica Alba from  Fantastic Four. 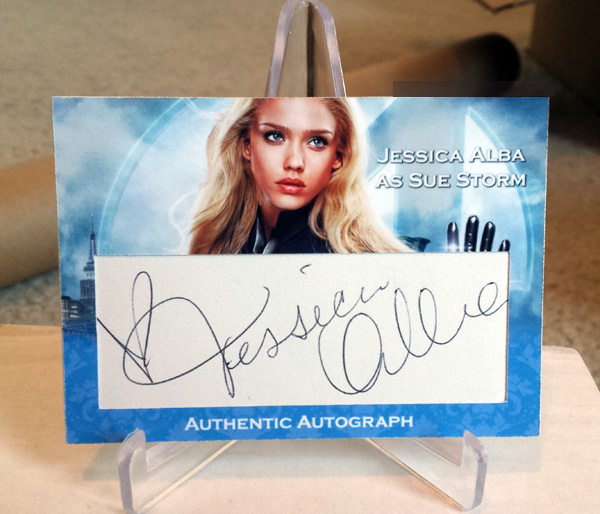 But lets face it, you aren’t living unless you have a 1993 SP Foil Homer Simpson.  Derek Jeter who? 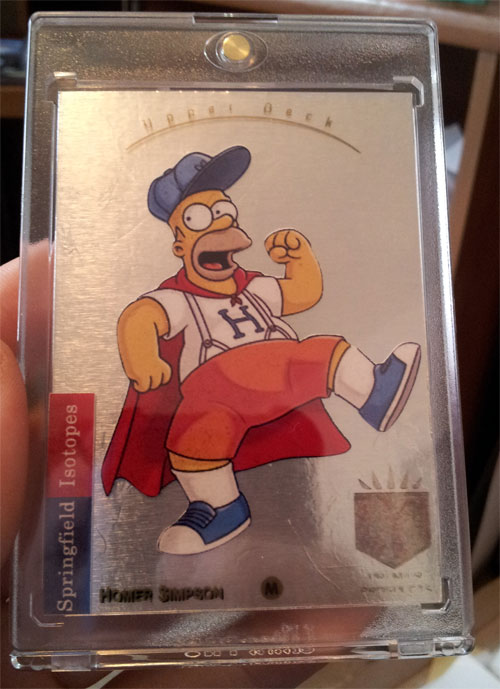 Among countless others.  My 10 year old self would truly be scratching his adolescent head for making such cards when he could be making cards of oh … I don’t know … BASEBALL PLAYERS.

Nevertheless, it brings me great joy.  Perhaps something else that makes it even better is when my tv “heroes” can be found in real life, and you can get your creations autographed.

Hold onto your moustaches, gents – today’s new arrival was one I thought was surely gone forever.  After 9 months of waiting, here it is: 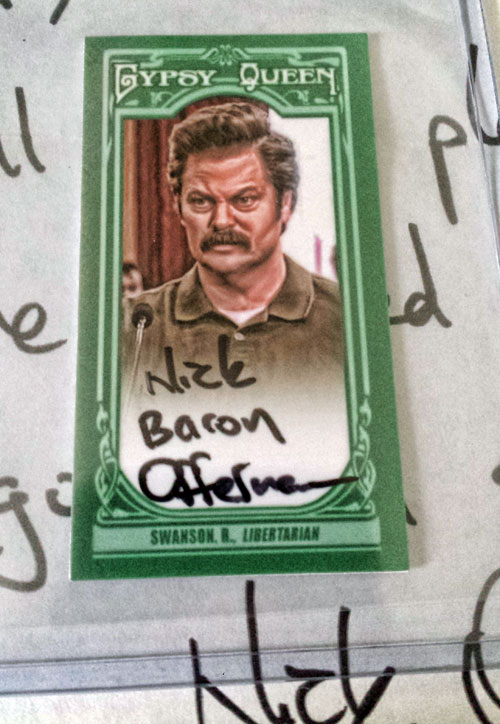 and the bacon back …. 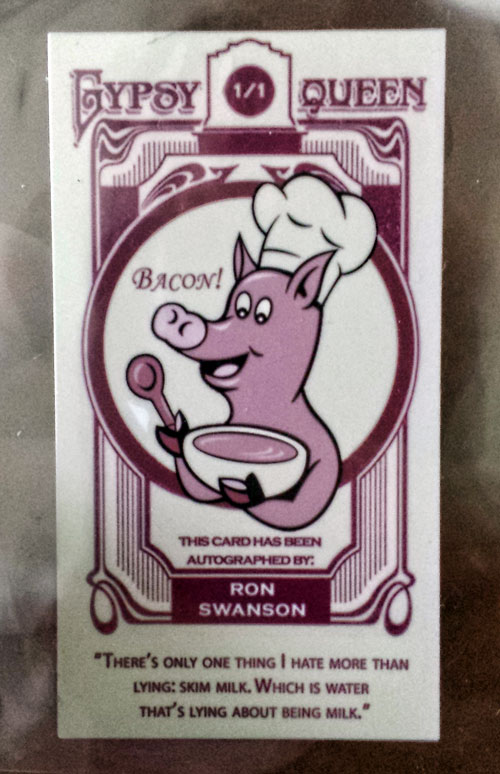 Nick Offerman … errr….Ron Swanson … took it up a notch though.  He sent me a personalized letter!  Here it is: 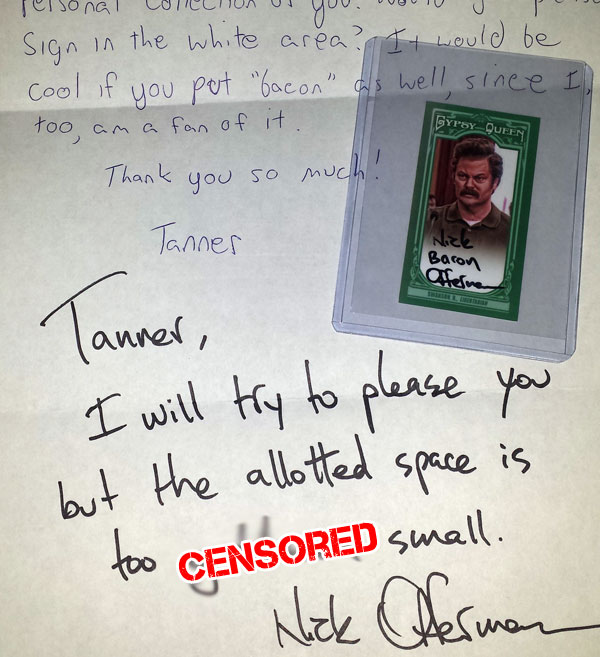 You know it is going to be a good day when one of your favorite television personalities sends you a profanity laced personalized message!

So yeah, today was a good day 🙂

I’ll wrap up this blog posting (or “thread” for those of you who are reading on a forum) with the announcement that Mouschi Code is now open for everyone to give it a try!  Out of the hundreds of people who tried to win, there was only one victor.  However, I wanted to allow everyone a chance to crack the Mouschi Code.  Here is a teaser of what the rip card winner experienced: 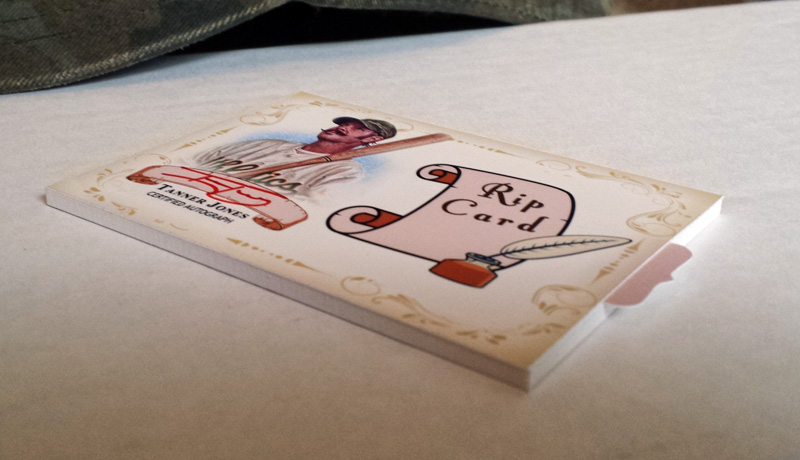 But what was in it? 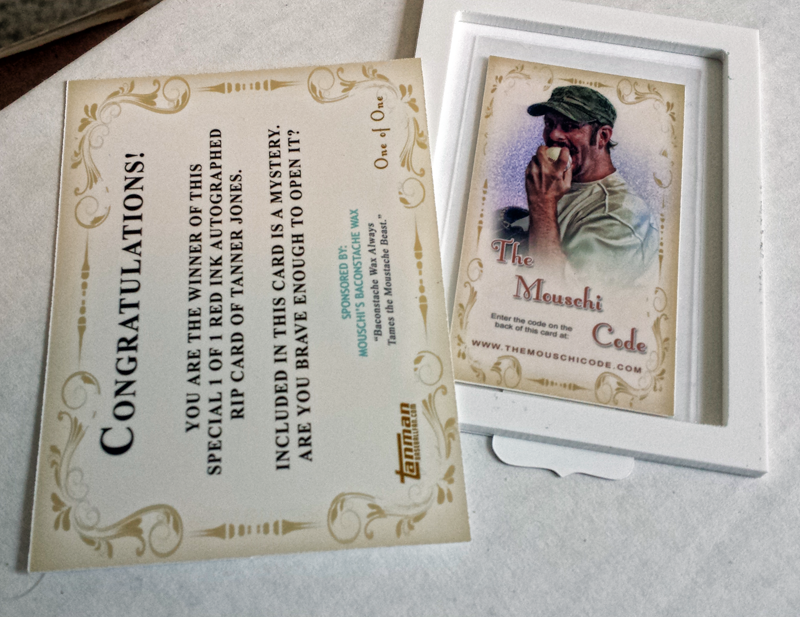 Yes!  A mini card of me eating a baseball.  Just what everyone wants!  I know what you are thinking.  That is plenty rewarding right there!  But keep reading … The card says enter the code on the back of the card at the website. 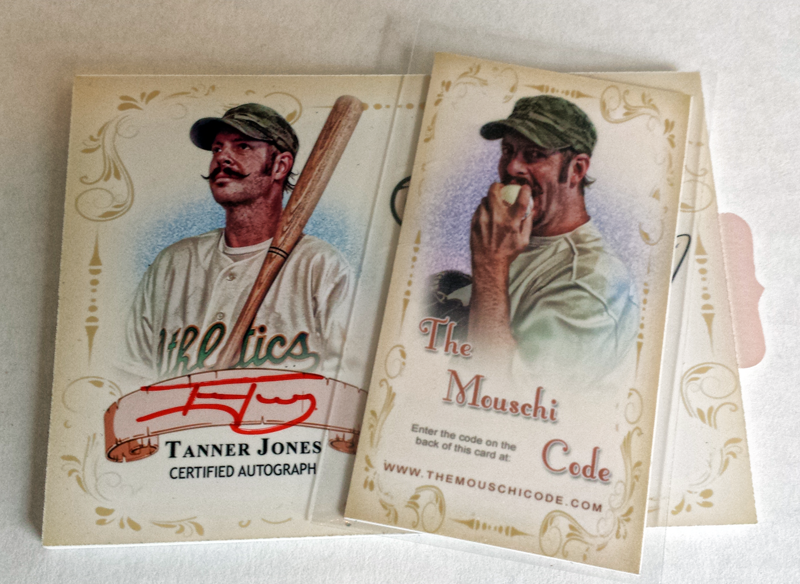 However, there is NOT a code.  It is a riddle FOR a code. 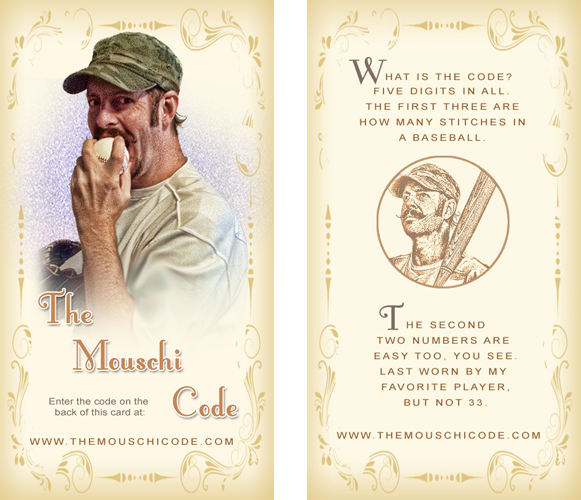 The winner would then figure out the riddle and enter it here: 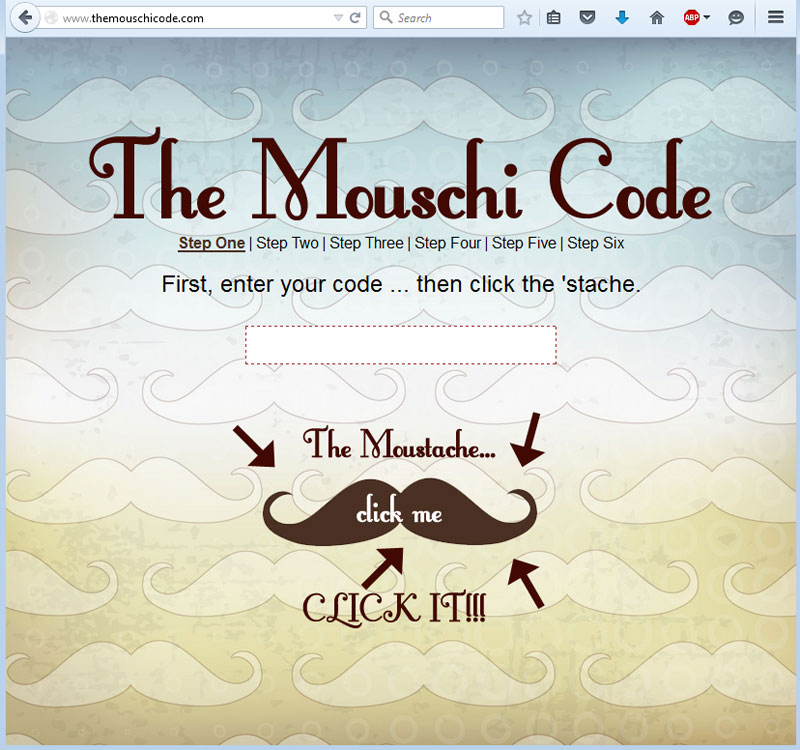 If he got it right, he would be met with several goofy questions that involve a video of me doing things like serenading him … 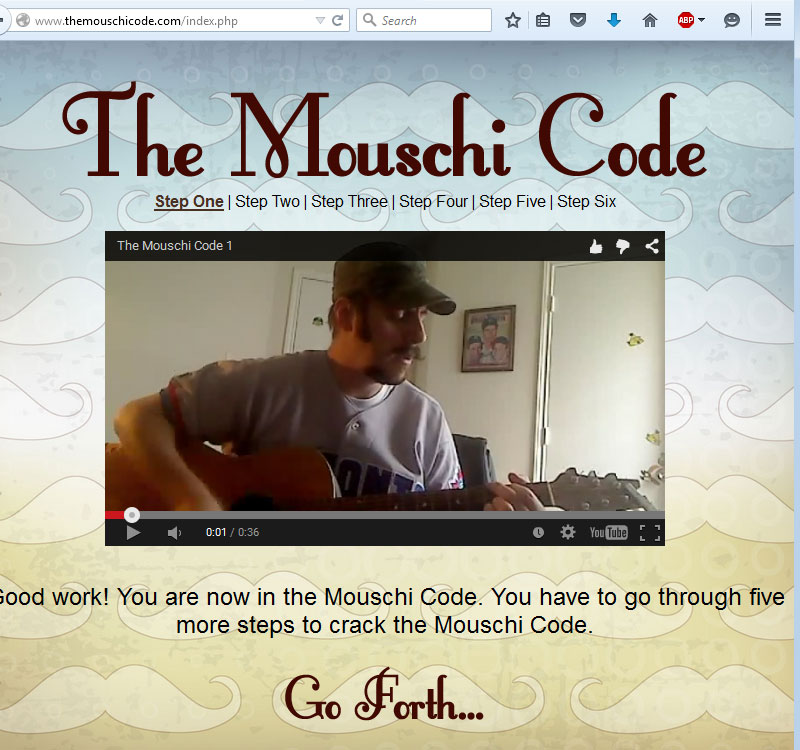 Snarling at him as a pirate 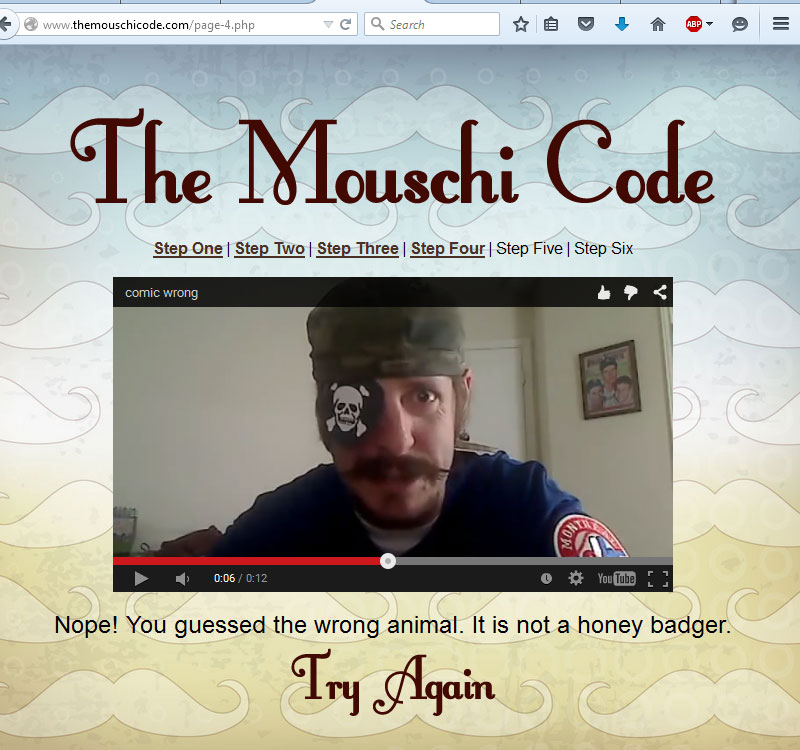 and even get an up close moustache lashing … 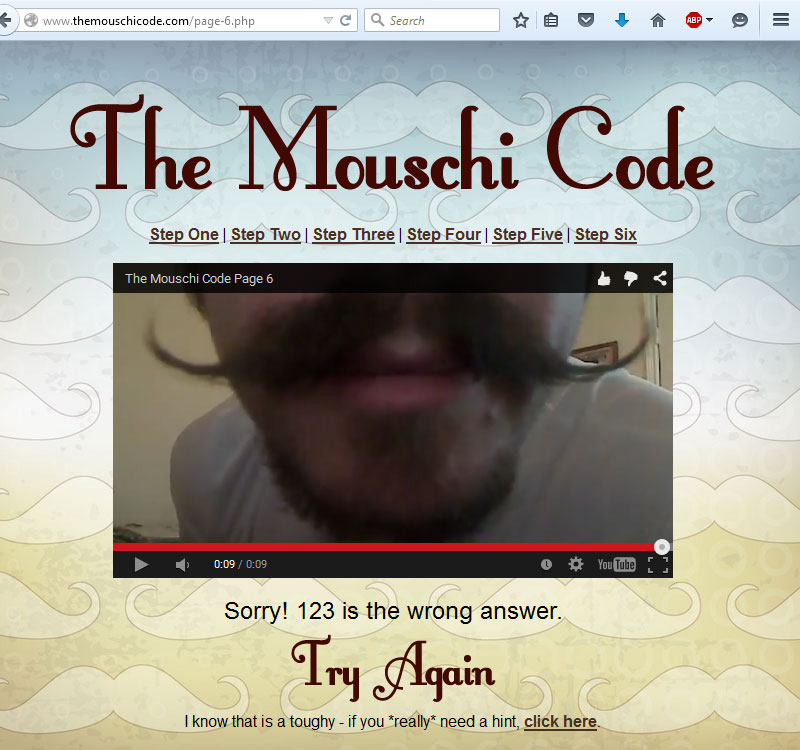 All in all, it would probably take someone 15 minutes to an hour depending.  Based upon the above images, you now have the ability to try it out for yourself since you have the first riddle on the back of the card to try it.  Sorry, you won’t be winning $10,000+ worth of cards like A&G gives its winners.  However, if you do crack the Mouschi code, you will definitely get mad respect from friends, family members and strangers alike.

I’ve always been intrigued by the Ginter Code, and have always been too dumb to figure it out, so I’ve wanted to put together something for those of us who are not ridiculously smart like @calculusdork.

The site is crazy cheesy / dorky, and took about 2 1/2 days to put together & I had fun doing it.  It is my hope you all will get a kick out of it too.