Yesterday afternoon, I heard my phone kaCHING a few extra times to bid my card up from $209 to $413 or $414 – Absolutely thrilling!  After researching one of the bidders, it turned out they are a banned member on a forum, though I couldn’t find anything negative they said.

The other person was another member on the forums, to which I reached out to letting them know I have my concerns of who is the high bidder, and they are the next in line for it.

Shortly thereafter, a new ebay member bid.  They ended up being the winner.  The person I reached out to wrote me back and said the following:

We went back and forth for a bit, and after I told them the new buyer was in the same area, they asked for the address so they could check for me. I thought this was quite a strange offer, so I did a little more research.

Here is the next response:

“What phone # is it? That is my address.  This is getting really creepy.”

After my next message to them, they confessed and said they did it because they were jealous of me and my creativity.  They said they were the top 3 bidders that had bid yesterday.

The next highest bidder quickly paid after I offered, thankfully, but ultimately, I was robbed of a chance of selling for between $208 and $412.

Unfortunately, I had multiple people tell me they would have paid more than I got, so I know I missed out getting the best I could for it.

I promised to keep the person’s name a secret – it was a teenage girl who did all this.  I mentioned that I would be proud of her if she confessed publicly online to people who did it.  Though she was scared to do so, she ultimately did!  Very classy move, I think.

So, that is all water under the bridge now.  Going forward, I’m THRILLED that it sold and will give the exact price later, along with the winner!  There were TONS of guesses about this all over the internet, so it will take a bit for me to do this.

If you have NOT won, stay tuned.  I will be opening up The Mouschi Code for everyone to take.  I had a fun time putting it together, and think/hope you will get a kick out of it as well.  Though only rip-card owners will get a prize for completing, I do have some pieces I will be selling to help the mission trip fund.

As I have been given some lemons, in an attempt to make lemonade out of it, here are the first offerings. 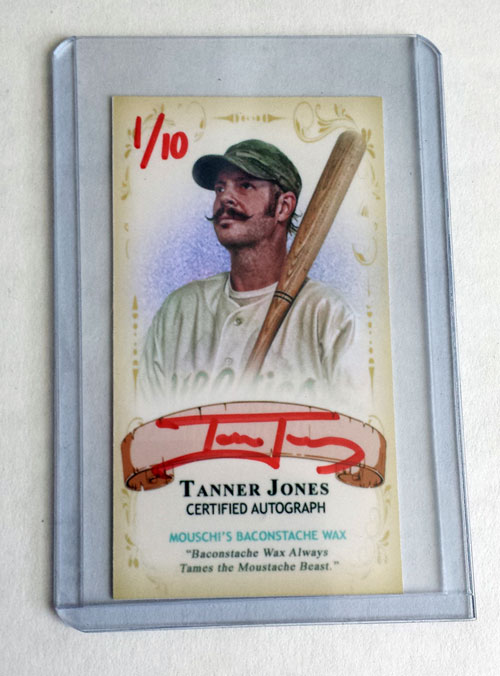 How can anyone’s collection be complete without an autographed card of a custom card maker?!?! 🙂  Post here, or PM me if you want one!