About 16 years ago, you may recall Fleer putting out a set by the name of Brilliants.  The base cards feature a chrome mirror like finish, and had a very premium look by itself.  Very classy looking card.  I remember seeing them from time to time whenever I would go through huge collections I purchased, and would find a Canseco.  I would be ecstatic because it was so nice looking!

Later on down the road, when I got more serious into my PC, I sought out the parallels as well.  They had a blue version, which was insanely beautiful – I was able to get my hands on that next, and they also had a gold version which was drop dead gorgeous.  It was numbered to 99, and I think I’ve only seen one up for sale, which was from former Canseco supercollector @1st4040. 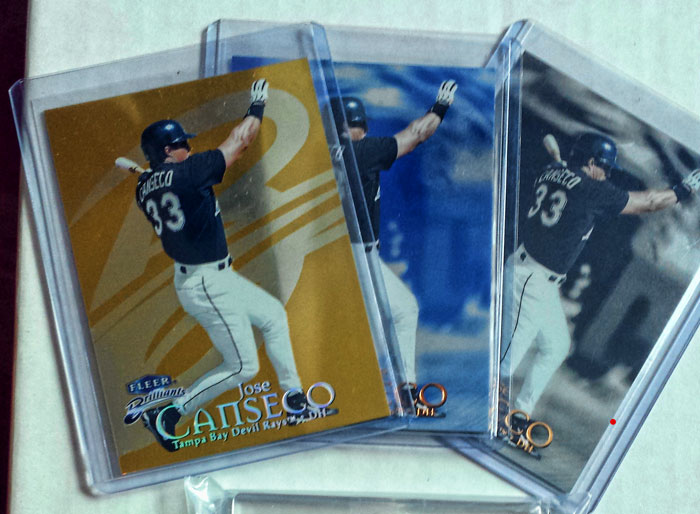 I LOVE these types of rainbows.

But, there is one final parallel to the set.  A 24kt gold version with a rainbow type finish and numbered to /24.   This was pie in the sky for me – especially when you have guys like Griffey selling for $1,500.  Heck, even the Thome recently went for $400.

I’ve only seen 2 others, and they are from 2 other fellow Canseco super collectors who wouldn’t give theirs up if their lives depended on it … or for anything less than $500 I’d imagine 🙂

I just so happened to be having the right conversation with the right person at the right time.  This person JUST pulled it from a pack!  I made an offer and he accepted!  Here is my precious … 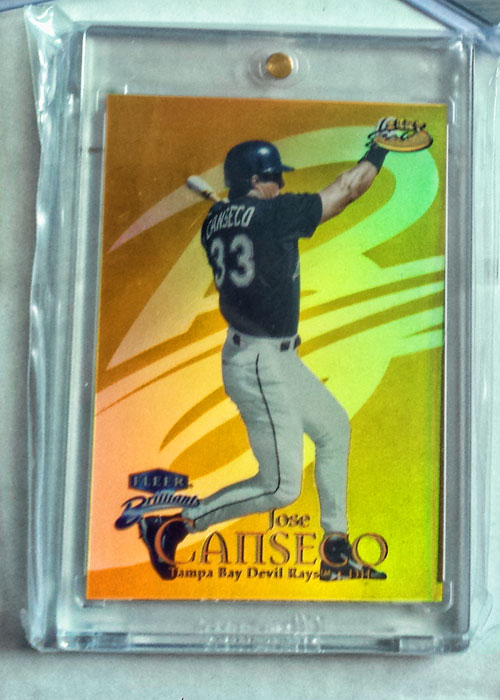 What’s that you say?  The pictures show my new treasure in different card holders?  Well, I couldn’t very well stage it with the others in a different holder, now could I?  Don’t judge me – you know you would do it too.

Anyway, I’m still mega hyped about my new pickup today.  I didn’t know if I would ever see one, and as it turns out – this particular copy has only been seen by the guy who pulled it, and me … until now.