In a quest to find more of the newer Canseco cards, I’ve found that many of the serial numbered stuff (as high as 100-200) are simply not available for sale online.

In the past few months, I have come a long way in understanding the twisted mind of a player collector. It isn’t just a function of how much money you want to throw out there. That is far from reality. I thought if you had money, you could make quick work of your want list and stake your flag at the top of super-collector mountain, proclaiming you as the man.

Even though we have more avenues than ever to pick up our favorite cards in today’s global marketplace, it can still be like finding a needle in a haystack.

1) A lot of product never got opened (I’d absolutely LOVE to know the numbers on various product print runs and how much was actually sold!)

2) Many serial #ed parallels look similar to their non-numbered counterparts and have been lost forever in the vast sea of base cards, rarely to be touched again.

I’m not sure if many people have seen this sort of thing before, but there are honestly millions upon millions of cards that literally may never even be thumbed through again … let alone for a specific player for your needs. I’ve personally seen and heard of tons of stockpiles like this. Out of the millions of cards I have sold off in the past several years, I didn’t look through the majority of them either – there simply isn’t enough time in life to do this sort of thing.

3) They are slowly transforming into a brick-o-cards. 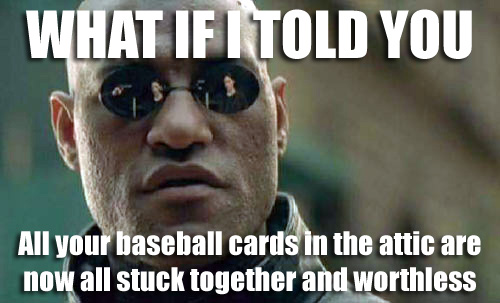 If you have had un-sleeved glossy cards in a box together in a non-climate controlled area, or any area that has stuff stacked on them, you are familiar with this.

Again, I sure wish there were a way to know print runs and how much went unsold. You never know when a card that was # to 100 only may only have 20-30 out there recognized for what they are.

As it turns out, I was wrong. I have NO credits versions, and THREE EACH of the best of!

What is going on? How did this happen???

I believe the 2010 Exquisite cards were #/75 or similar as well, and yet only a few exist.

This could get interesting, I think. Not all is as it seems. Heck, I’m seeing some serial numbered cards outselling the same card with a relic embedded on them.

Obviously, this isn’t the norm, but it seems to be happening more and more these days. Never in a million years would I have ever thought this would have happened, but it does.

Relic cards have seemingly flooded the market, and while there will ALWAYS be a market for them (because let’s face it … they are awesome!) they were/are rarely, if ever overlooked like some serial numbered parallels are.

15 or more years have passed since the first relic card hit the market, and ever since, collectors have been grabbing them up like crazy. Nowadays, collectors are looking in their collections and saying…

“Wait a second – they made a blue, red and green version of the same card with no relic on it? Cool! Time to hit ebay and pick ’em up! The relic card was $20, so surely the non-relic versions are easy to find and only $1-5 each!”

So you hit ebay, and… 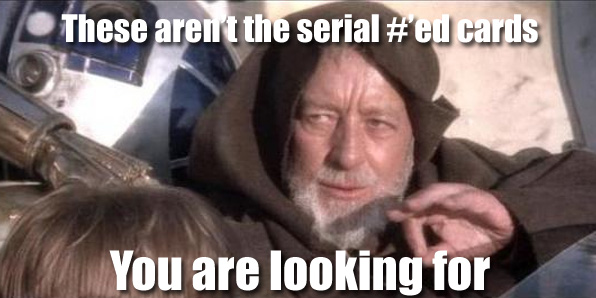 Days turn into weeks, and weeks into months.

Then finally one comes up – for higher than what you paid for your relic card. You have a choice of either waiting for the next version of it to pop up (which literally may not happen again) or cough up the extra dough. If you want to get almost all of the cards of the player you collect, this scenario could play out a hundred times over the next decade. Either you pay higher than you expect, or you simply don’t get the card. 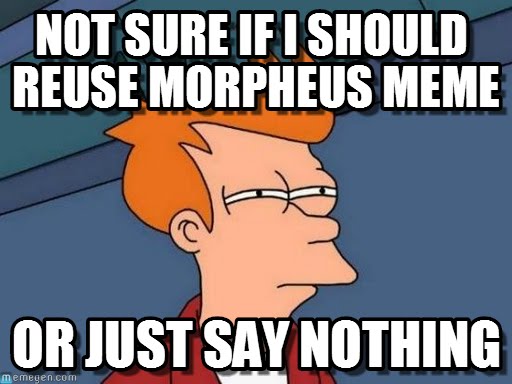 As a numbers guy, (I’m saying this in a roundabout way for the third time, I know) I sure would LOVE to know if there is a truly solid way to determine at least some sort of an idea … not necessarily the print runs, because I think they are accurate … but rather that availability of certain cards that have not been lost in the sea of base.

How would the value to you and others be changed if you found out that one mid 00’s donruss insert had a print run of 100 but only 30 out there were “gettable”?

Don’t get me started on the black hole of 90’s cards that is pacific. They had so many parallels and some were not numbered, but INSANELY tough to grab, making even the most super of collectors fall to their knees and cry.

What higher serial numbered cards have you been chasing that might as well seem to be #/5 or less? I’m curious to hear your experiences and theories.