In the early 90’s, I believe it was, a new, cutting edge type of comic book came out by the name of the Walking Dead.  It was a very limited run.  I was not into comics, nor am I now (though I do enjoy the thought of having them, plus, I’ve sold about 40,000 of them over the past 4 years or so.)

When the tv show hit, the prices sky-rocketed.  Whenever I would sell a lot of comics, the first question was “Got any Walking Dead?”  The answer would always be no.  Why?  Because they were very scarce … EVERYBODY and their brother wants them!  Heck, even those who didn’t ask, would go straight to the “W’s”, and thumb through them to see what there was.

Card companies have put out some pretty cool parallels.  Topps for instance, came out with the gold parallel.  It has taken on a number of forms – from the early 90’s that was merely gold foil over the names, to the now-more standardized gold borders.

I have heard some stories about such a card before.  I have even seen a few, which I absolutely loved the look.  I keep thinking … why on earth didn’t they come out with these things before?  Apparently, there is one “SHEET” of these that is known in existence (by me anyway).  It is sheet “F” which means the Canseco All Star would have been on that sheet.  So, either 33 or 66 of these cards (different players) are possible, but in sheet form, many can get damaged over the years with wrinkles, or trying to cut them out of a sheet, etc.  So if we aren’t looking at a 1/1 card, we are still looking at something incredibly scarce.

The other day, I was shown that the Canseco does truly exist!  It was in the hands of another collector whom I suspected had it, but heard it was offered up for a large amount of money.  After my first purchase with this seller, I asked again hoping to be offered it.  Sure enough … he offered!

I got it!  I also got some other cool items.  My first pic of it was in a bgs slabbed holder, but the buyer took it out to put it in his Canseco binder.  I don’t like that he did that, but honestly … I’m not a fan of slabs anyway.

So, here it is:  the great-great-great grandfather of the topps gold border parallels …. 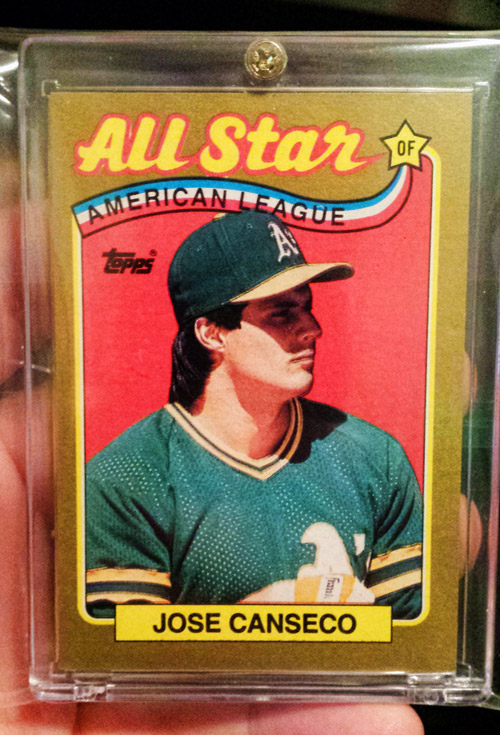 I truly love this card.  This is like the Topps version of the Aqueous, but I’d have to say cooler because not only may it be more rare; it is also significantly more different looking on the front instead of just a stamp on the back.

It is like the Walking Dead comics that were not popularized until the tv shows came along.  I wonder if Topps threw this concept around and perhaps the higher ups just didn’t like the look because it was ahead of its time.  Perhaps it was too gaudy for them, I don’t know.  I think it is cool that this may have been the birth piece of gold borders.

Out of all the amazing pickups I’ve made over the past few months, this ranks up there as one of my favorites, if not my favorite!