I’ve had a LOT of awesome pickups recently, but here is a more unique one. I was cruising online to see if anyone had a nice lot of Canseco I did not have, and lo & behold, someone had something that I hadn’t ever seen before.

Pacific Show/Expo embossed cards. They are cool enough w/out a back story, but the history of them make them definitely worthwhile.

You cannot really tell they are embossed until you tilt them in the light, and then they pop.

Back in the 90’s, Pacific setup at card shows with a promotion where you could bring any Pacific unopened pack of cards to them of any sport, and for $3, you could get ONE card per pack embossed.

They had shows in Chicago, St. Louis, Kansas City, Toronto, Montreal, NY/NJ and perhaps other places as well. Try as hard as I could, and I was simply dumbfounded at the lack of information on these events … forget about finding any embossed Canseco cards!!! I simply could not find any at all.

I love these types of cards. I love the story of how you had to open the packs in front of Pacific and how their stamps were used to emboss. It is a mystery at how many are out there, but I have a strong feeling that the Canseco supply is very, very limited. Not just because I simply cannot find any, but because of putting two and two together. Here is an example:

Say you are a dealer and you bring a box of Pacific to the table. It is going to cost you $108 to get one card per pack. You were not guaranteed a single Canseco in one box – (500-550 cards per box, but 660 cards per set by using ’93 as an example) and even then, his card would have to compete with the rest of the pack. If the pack with Canseco was in the same pack as Sosa, McGwire, Bonds, Ripken, Nolan, Jeter, Griffey, Thomas, etc. the odds are the dealer would pass on Jose and have the other bigger card from the pack embossed.

Something else to keep in mind as well is the limited number of boxes opened in front of Pacific representatives. We aren’t talking like a print run of 75 that was scattered throughout an entire product. We are probably talking about a VERY small piece of the production pie that even had a chance to get embossed. Coupled with the fact that if an unknowing collector doesn’t tilt the card in the light at the right time to see the difference, you have made a very rare card much, much rarer.

I was fortunate to talk at length with a dealer about this who basically stalked Pacific in the 90’s to get a bunch of cards done. I was very thankful to have met him and learn the story from him. I was able to pick up something truly unique for my collection! 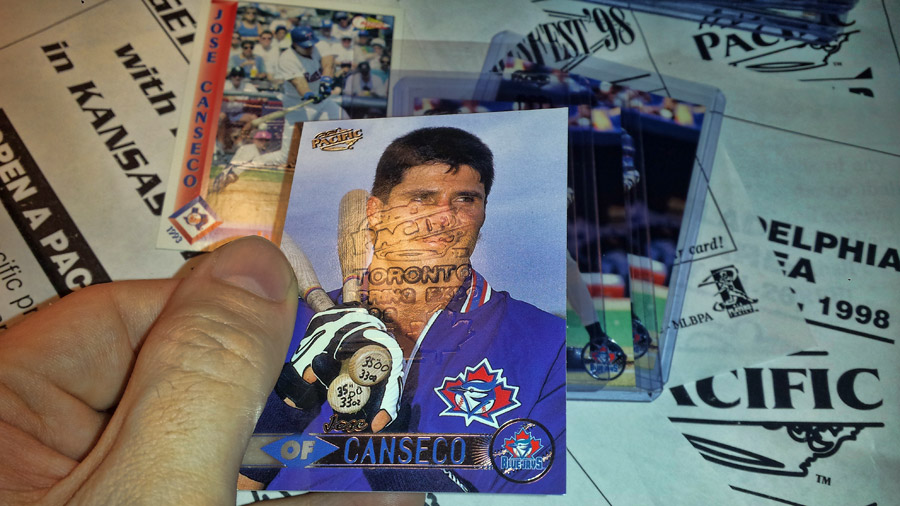 But not only that – he sold me 16 different others. As you can see, there are doubles, but the stamps are different. 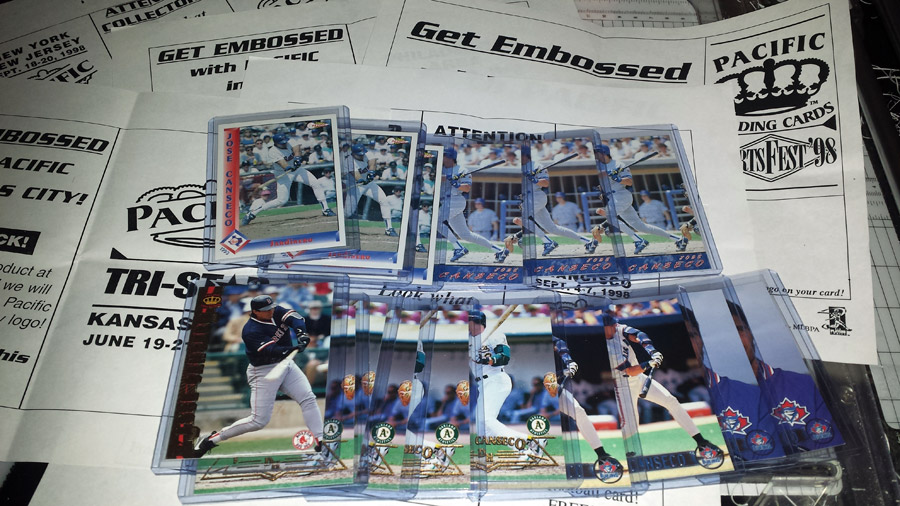 He was kind enough to throw in several fliers from the card shows as well. They state that you can bring any 1998 product, but in the end, they allowed for a pacific product of any year and any sport as long as it was in fact from Pacific, and was opened in front of them.

Some of the coolest cards I got from him were the ones stamped with the Super Bowl 33 Logo. 33 of course, being Canseco’s number makes the player collector in me jump for joy.

So, with all that said, I’m officially hooked on these, and will continue to be looking for more!