Fantasy baseball.  A fairly recent past time for fans all over America – it is an obsession for many.  One that I have never indulged.  I’ve been told that since I’m such a baseball freak, I’d probably do pretty well, but I just never have gotten into it.

Whenever I think of Fantasy Baseball, visions of dragons breathing fire at baseball players come to mind.  Baseball players with swords instead of baseball bats.  Am I alone in this?  Probably.

But it gave me some ideas for my latest creation.  I’ve been thinking about it for a while now, and since someone had hired me recently to do a Magic the Gathering card, I thought now would be the time to try and come up with a cool Canseco MTG card.  I think it fits, because while my son is not into MTG, he does love Pokemon cards and dragons – same difference, right?

I’m sure I probably offended a good portion of my reading audience by that last sentence, so please forgive my ignorance on the subject. 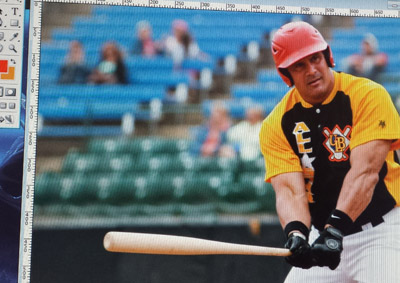 This picture is of him in his post MLB playing days, so it makes it extra unique.

Slap this baby on an MTG card, and put a catchy name on it and we are good to go!

Let’s call him CANSECO THE CRUSHER!!! 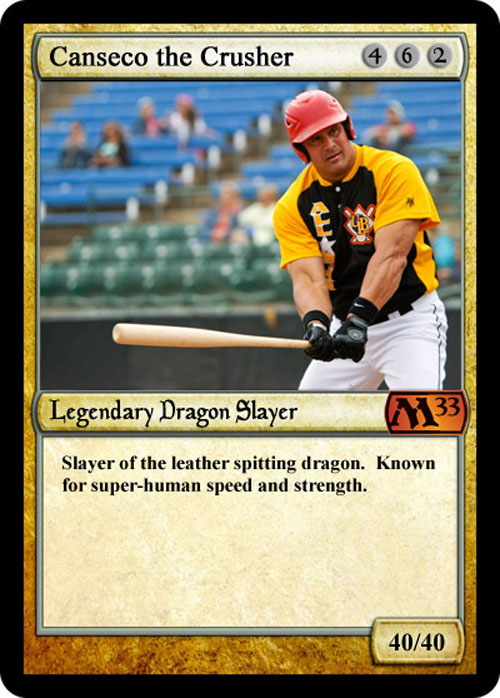 A few things to be noted on this card.  All of the little things on an MTG card mean something.  I forget what the upper right circle areas are for, but for my card, I wanted it to be his home run total.
The bottom right number shows the # of hits in a game a user can sustain, followed by how much punishment he can dish out.  I was racking my brain a bit to see what I should put there.  Then … duh!  40/40, of course since he hit 40 homers and stole 40 bags in the same season.

Something about this card simply does not look … “done” yet, so let’s take this a little further.  I didn’t just want a fantasy type MTG card with a regular photo, so I added some effects to Jose and cut out the background. 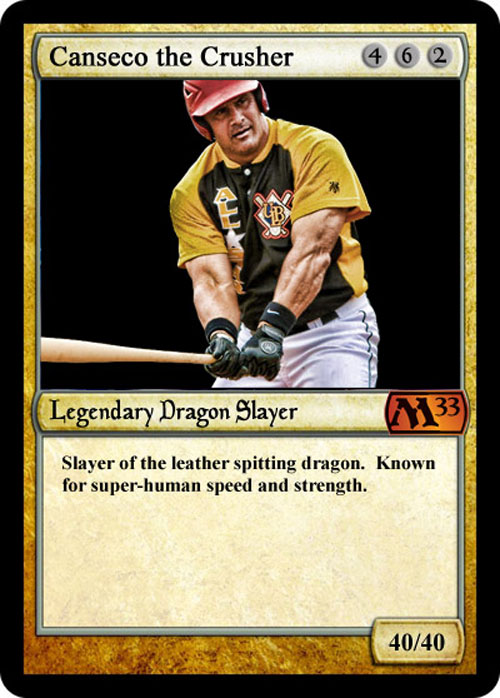 To give it more of a fantasy feel, I thought I’d add some more type of glowing effects. 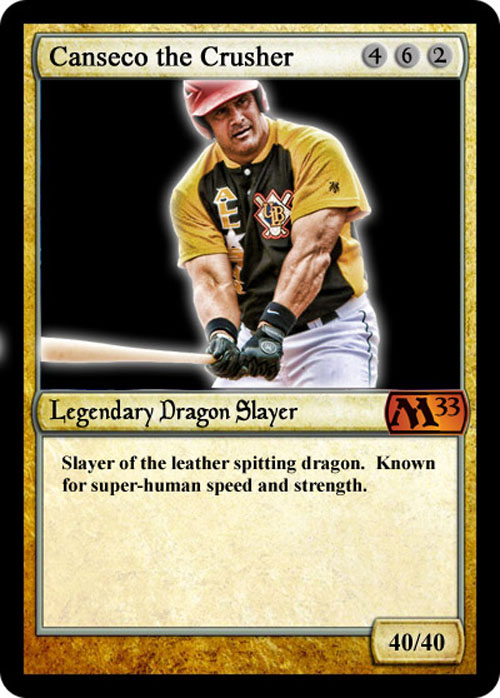 We are getting close!  But no self-respecting leather spitting dragon slayer would come at one of those guys with a bat.  How about this instead?

Yeah, that should do it! 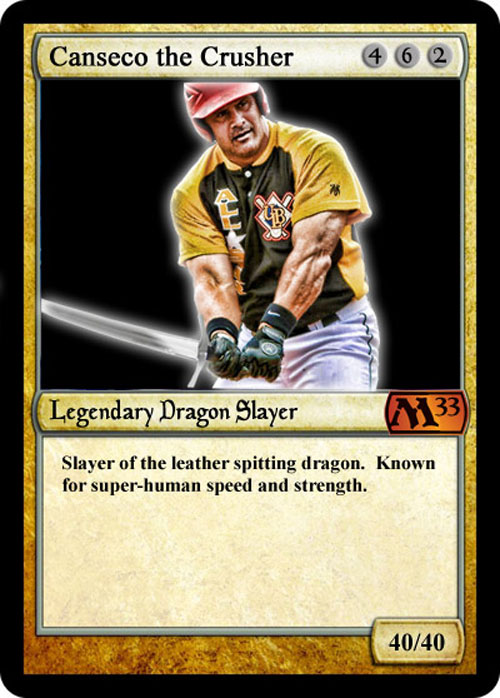 BOOM! But something still isn’t quite right. Let’s give him some other-worldly eyes… 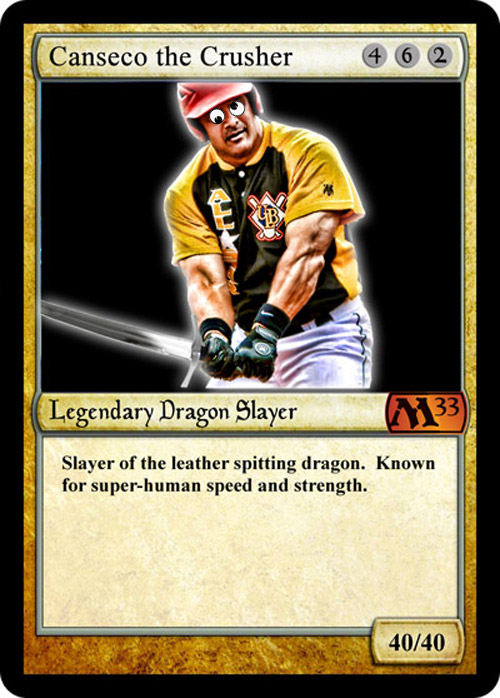 Yeah, that’s not working this side of toon-town. Let’s give it another go, and make them glow subtly yet deviously (is that a word?) 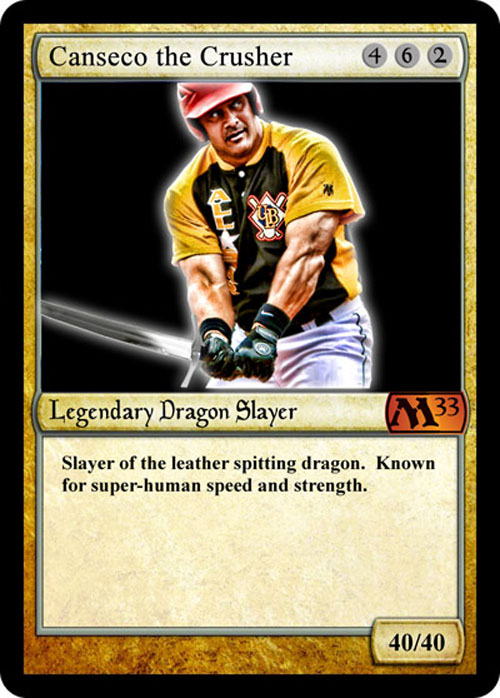 Okay, THERE it is.  This dude looks bad to the bone.  However, I still feel like we need to add something.  Something in the background, something fierce and mystical.  Like DRAGONS!!! 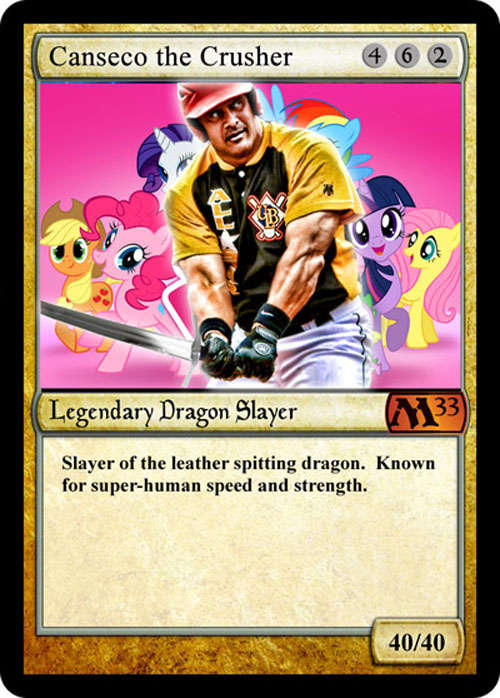 Ehhh, no … that isn’t quite what I had imagined.  I said DRAGONS.  Bad to the bone, make you want to pee in your pants if you aren’t Canseco the Crusher, heavy metal inducing DRAGONS.  This is probably better. 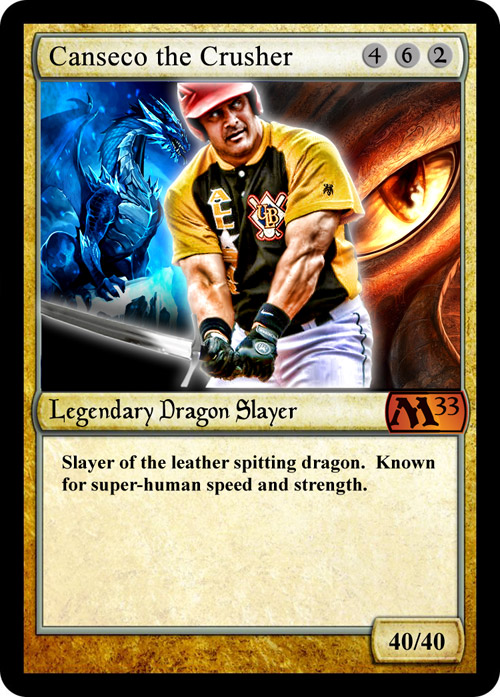 I ended up making two versions:  A base and a foil version. 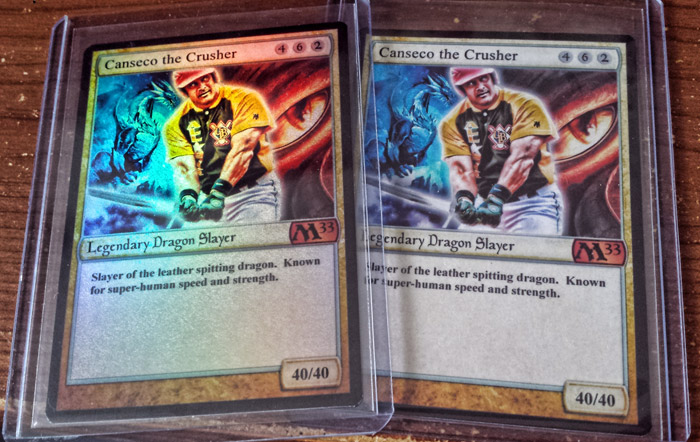 For a goofy type of card, I think it turned out pretty slick!  These pics don’t do them justice … they look MUCH better in hand.

For those of you still reading along, I wanted to share a little bit of the story of how this whole thing came about:

The person that contacted me wanted to have me make a card of one of his co-worker’s children.  The child passed away recently, and because his co-worker liked MTG, he thought it would be cool to be able to give him an MTG card of his child, so that is where I came in.

For anyone who wouldn’t mind sending a few dollars there way, you can go to their gofundme website at http://www.gofundme.com/morganb – it is hard enough to deal with the loss of a child (words completely fail me at the very thought of this) – I couldn’t imagine being thousands of dollars in debt because of it as well.  Anyway, just think about it.  They are currently at $8,950 and have $11,050 to go.