Today was destined to be a good day.

My taxes are done, and today is opening day.  Life is good.  Then, I got a note stating that our flood insurance went up by $250 and I was going to be charged for a server overage of $80.  D’oh!!!

It is ok though … because it is still opening day.  Plus, I caught wind of a collection that was supposed to be pretty hot stuff.  There we a few pictures that accompanied the ad for the collection – the lead pic is shown below: 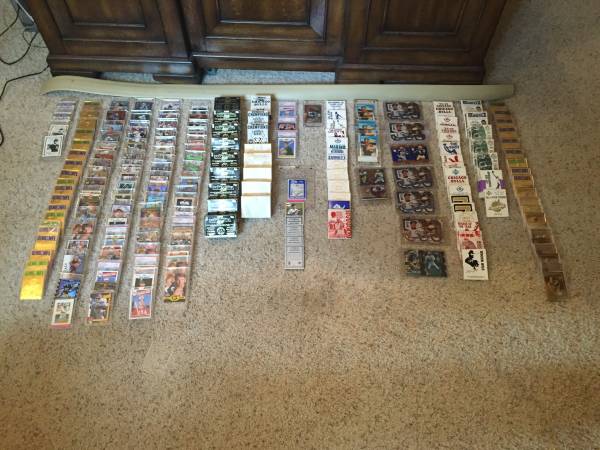 Pictures rarely, if ever, show the entire scope of the collection, so I read more about it.  It stated there were a MILLION cards total.  This piqued my interest enough to give the owner a call.

After speaking with him, it turns out he knows his way around ebay.  He spent hours upon hours searching ebay and checking SOLD listings – as a seller, you know that is the key when checking the value of cards.

He told me within just two boxes, the sold listings for THIS YEAR totaled up to $10,000 … and he said he had a lot, lot, LOT more!  It was 45 minutes away, and I was hesitant, but decided to take the trek.  If anything, I was curious as to what the story was behind these.

I told my wife I would be leaving after dinner, which by the way ended up being her surprising me with a meal she brought home from LUPE TORTILLA … the *BEST* mexican restaurant in the galaxy.  If you haven’t been there … go and buy the beef quesadillas…droooollll.

After I stuffed my face, I took the trip in the cardboard mobile.  I started thinking to myself what I would find, and how I would try to explain to the seller that these cards are NOT merely a commodity; they have a chunk of time attached to them – time that has a price to it, which in turn effectively lowers the value of the cards for the buyer.  It is one thing to buy one card for $100 and sell for $200.  It is quite another to buy 30 cards worth $3 each and sell for $6 each.

When I entered the neighborhood, it looked like I was in Beverly Hills.  The houses were gorgeous, and they were scattered among a very hilly landscape.  As I found the house, I pulled into a very nice driveway, almost wondering if my car was good enough to park there.  As I hopped out, I had a bit of difficulty determining where to go.  I then found a brick entrance that funneled into a terrace, or patio, which then finally led to the door.

I was let in, and greeted by a man and his father who was 78 years old.  They led me into the office where the cards were all over the floor, and before my eyes could take in everything, he handed me a pile of cards while saying “These cards alone have sold for $130 on ebay this year.”

There were rubber bands around them.

While trying to educate them about the horrors of having cards held together by rubber bands, I carefully took them off, and shuffled through them.  Are these 90’s inserts that I hadn’t heard of?  Are these…wait … 1985 Topps Tony LaRussa?  1986 Topps Jose Oquendo?  1996 Skybox Grant Hill!?!

Something wasn’t right. I just stood there kind of dumbfounded.

He was unable to tell me, and said many of them sold on ebay for $1.  At this point, I wanted to see the 2 boxes he was speaking of that went for $10,000 on ebay.  We spent quite a while searching for them, and meanwhile going through the other cards.

As I have seen before, LOTS of junk wax era cards. There were some 1985 Topps Mark McGwire cards mixed in, and heck …even a Johnny Bench rookie, though it was in fairly rough shape.  Don’t get me wrong, there were some nice cards, but anything I saw was a far, far cry from the visions of psa Mantles I had dancing in my head.

He had many gold plated type of cards too, but sadly, those only went for a few dollars each.  too bad, too – they looked nice!  I asked where they got these cards from, and as it turns out, they are resellers themselves.  These cards came from someone out of state who had inherited $5,000,000.00.  Yes, 5 million bucks.  He was a fellow who was addicted to collecting things and buying stuff from the home shopping network.  In doing so, he had amassed quite a collection of sports cards.  I was told that what was at their house was maybe 1/15th of what he had in total.

We finally found the boxes of goodies, and the majority of the cards were less valuable than the cards in the holders.  The guy was clearly a McGwire fan, as there were TONS of McGwire….like…the 1990 score and 1992 topps kind.

I was led out to the garage to see the cards in the trunk of their car, and it was the same kind of stuff.  As I took a knife to one of the boxes, I said “I predict that every single one of the cards in this box is from 1985 to 1995.”  I was right!  Go figure.

During this time, I helped educate them by what ebay sales means, vs. the frequency of sales – for example, if you have 10 unopened boxes of a certain type/year of cards, just because one sold for $20, doesn’t mean you have an easy $200.  If they sell at a frequency of 1 every 3 months, then it quickly becomes a 2 1/2 year endeavor.

I also told them how they can check to see what the best offers truly were on ebay, and various other little tricks to help them sell.  I told them if I didn’t make the purchase, then at least they will be more knowledgeable for the next buyer.

At the very end, it was becoming painfully clear that  they didn’t have tens of thousands of dollars worth of cards, nor did they have a million cards.  They had about 75,000 cards or so.  It was awkward, but after educating them on the value of the cards, I told them I would probably in it for $350, as would most other resellers.  I also mentioned i would probably hope to get $600-750 out of them.

I know this was way below what they were expecting, but I told them of the story about the man with the Nolan Ryan hoard.

A man came to me with 500 Nolan Ryan cards that were from a food chain in the area.  He wanted $500, and said they sold for $3 each, making the lot worth $1,500.  I told the man that they sold at a rate of one every 2 months, so while I would definitely triple my money, it probably wouldn’t happen until about 212 years later!

I let the sellers know that they very well may have $3,000 worth of cards there, but it would probably take them 3 years to realize that profit.

They politely declined, and I fully understood.  Before I left, one card did catch my eye in the cache of McGwire cards.  A 1982 card of him playing in Alaska as a pitcher.  I inquired how much they wanted for it and they said since I came out and taught them a bit, it was mine for free! 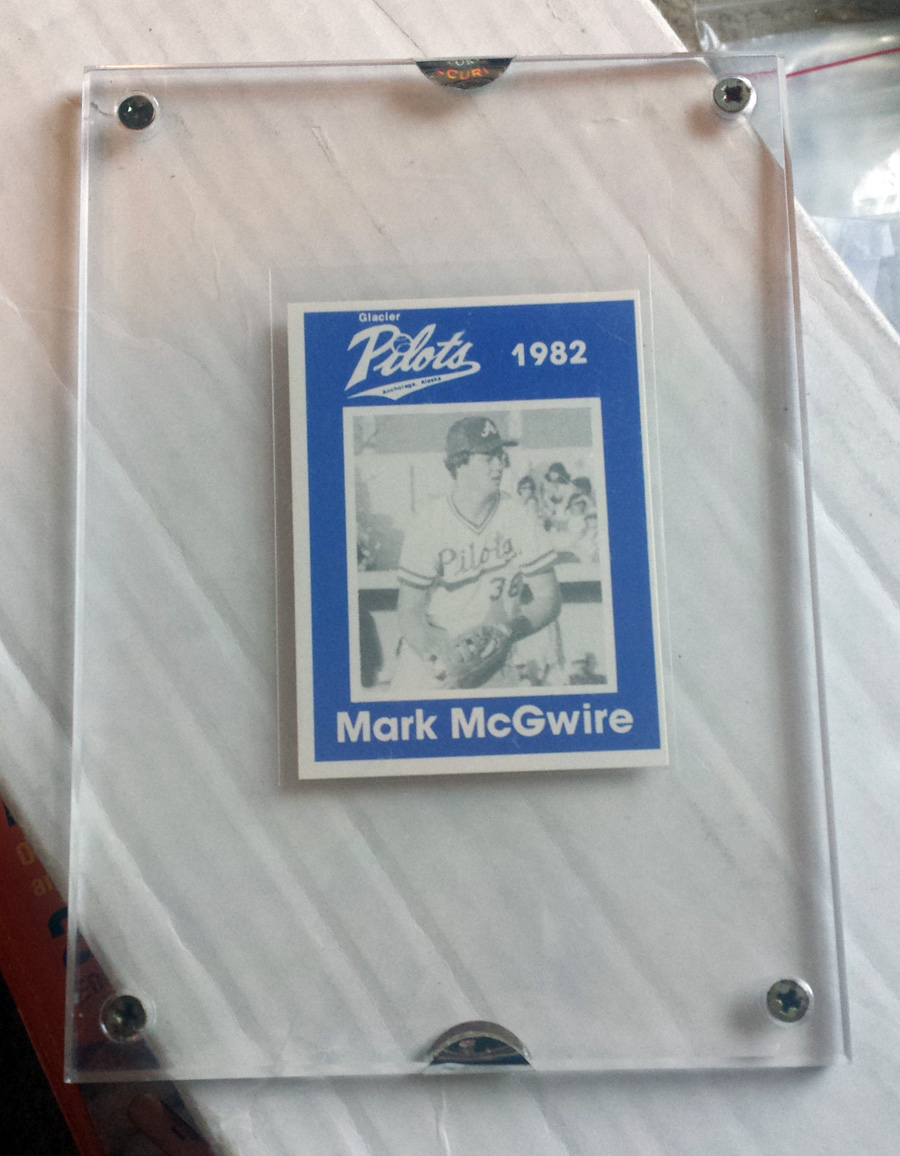 I would have come out ahead had I just bought this on ebay, when considering the time and gas spent to go through this, but I never would have, so for now, it is a cool little piece to add to my collection and I guess it gave me something to blog about.

EDIT: So, apparently, there is more to this story than meets the eye! The 1982 McGwire was not actually made in 1982. Here is what Beckett says:

This blue-bordered card features a black and white photo of young Mark McGwire. Interestingly, McGwire was listed as both a first baseman and pitcher, and the card was issued to honor a no-hitter he threw in the American Legion finals against a Laramie, Wyoming team. The card was actually produced in two printings between 1988 and 1989. One printing for a California distributor resulted in mostly off-centered cards, while the second printing (for the team itself) was centered.

Now, to go even further with this … the card was sealed in an huge holder with holograms on the top and bottom, and was sold for $1,000 when paired with his 1985 Topps McGwire card from the Shop at Home network back in the 90’s. Here is an invoice I tracked down online: 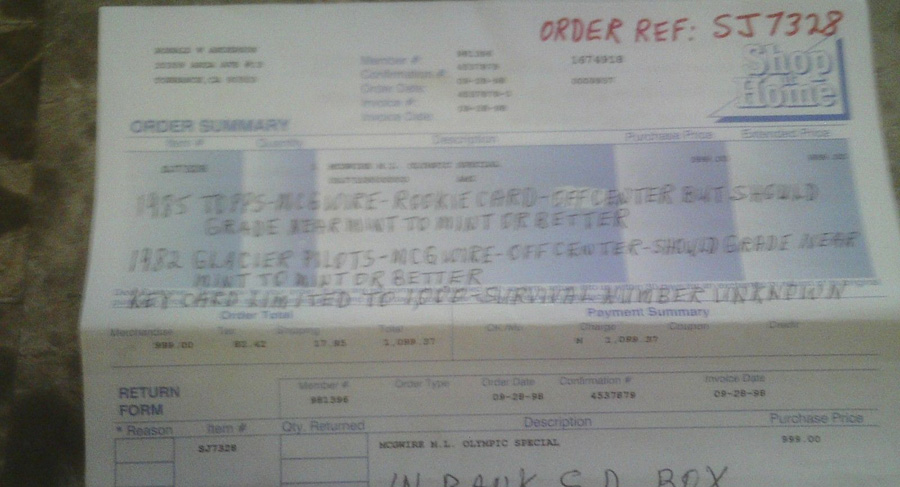 Gosh, I love cards and their history – This stuff is really interesting to me!